In recent times, there have been plans to build new housing estates on the Kurnell Peninsula in Sydney's south and a major shopping centre. There are plenty of locals across the Sutherland Shire that aren't happy about it. But if you look at those plans and like others here, it looks quite conservative. Imagine high rise buildings stretching across Greenhills through to Boat Harbour. This would have included hotels, apartments, a hospital and sporting facilities including an eighteen hole Golf Course, Tennis and Equestrian centres.

It actually makes any proposed housing or industrial estates seem mild compared to this. Barely any mention too of the airport flight paths which do cross over the peninsula. I don't think that would impress tourists at all as they relax with a drink in hand on the sand.
Posted by Fabian Amuso at 00:01 No comments:

This weeks property advertisement is from 1991 for HomeWorld II. In 1991, there was just the one site; at Prospect. With Homeworld IV, it is now expanded to four sites - Kellyville, Gledswood Hills, Chisholm (Hunter Valley) and Port Macquarie. HomeWorld II replaced the original HomeWorld display village, also in Prospect which opened in 1986. 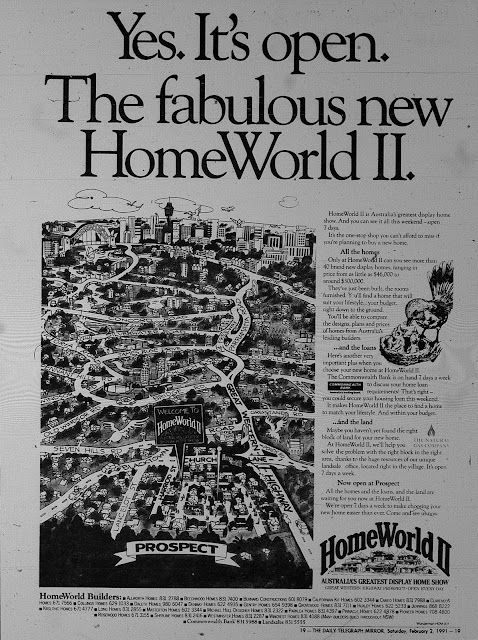 Normally, we would have an entry on Monday, but for this week have decided to post on Wednesday as today is 45 years to the day since Kmart began operations in Sydney with their first store at Blacktown. The opening came just six months after their first store was opened at Burwood East in Melbourne. Unlike today, you could also do your grocery shopping there. 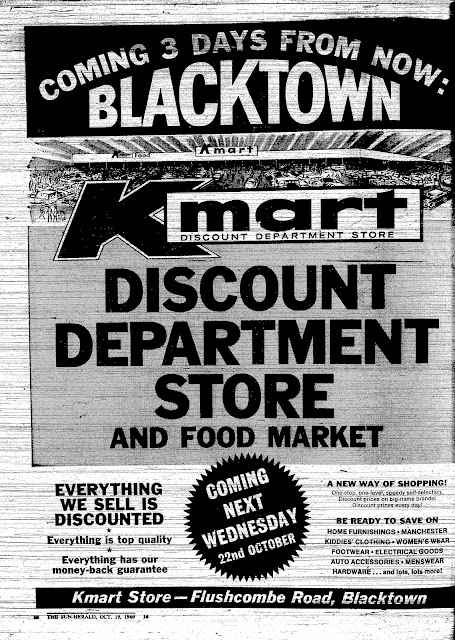 
The original building is still standing and pulling in the crowds.

This week, we head to Castle Hill where in 1970, Parkes were selling blocks of land as part of its Parsonage Gardens estate. The $6500 for your block would equate to just under $69 000 in today's money as based on the RBA Inflation Calculator.

Housing lots as part of the estate were located on Excelsior Avenue, Parsonage Road, Dresden Avenue and Milguy Avenue. 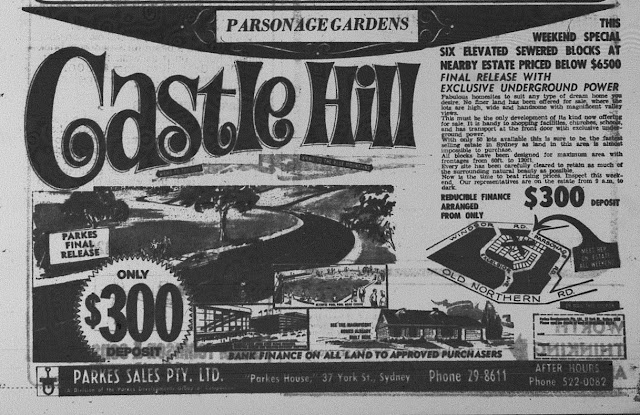 Next Week's flashback will be on Wednesday instead of Monday. Wednesday will be 45 years to the day that Kmart first opened a store in Sydney and I have prepared an entry relating to that event.
Posted by Fabian Amuso at 00:00 No comments:

David Jones opens at an expanded Macquarie Centre this week. Its opening has been a long time coming, in fact about forty-five years going by this proposal to build their own shopping centre known as Garden City at Epping Road, Macquarie Park (formally part of North Ryde). This is roughly where Optus is based today within the suburb.

The proposal came up in response to Grace Bros plans to build what is now Macquarie Centre (see map below). They had difficulty seeking approval themselves, with the plans rejected by Ryde Council and they were forced to lodge their plans with the State Planning Authority. 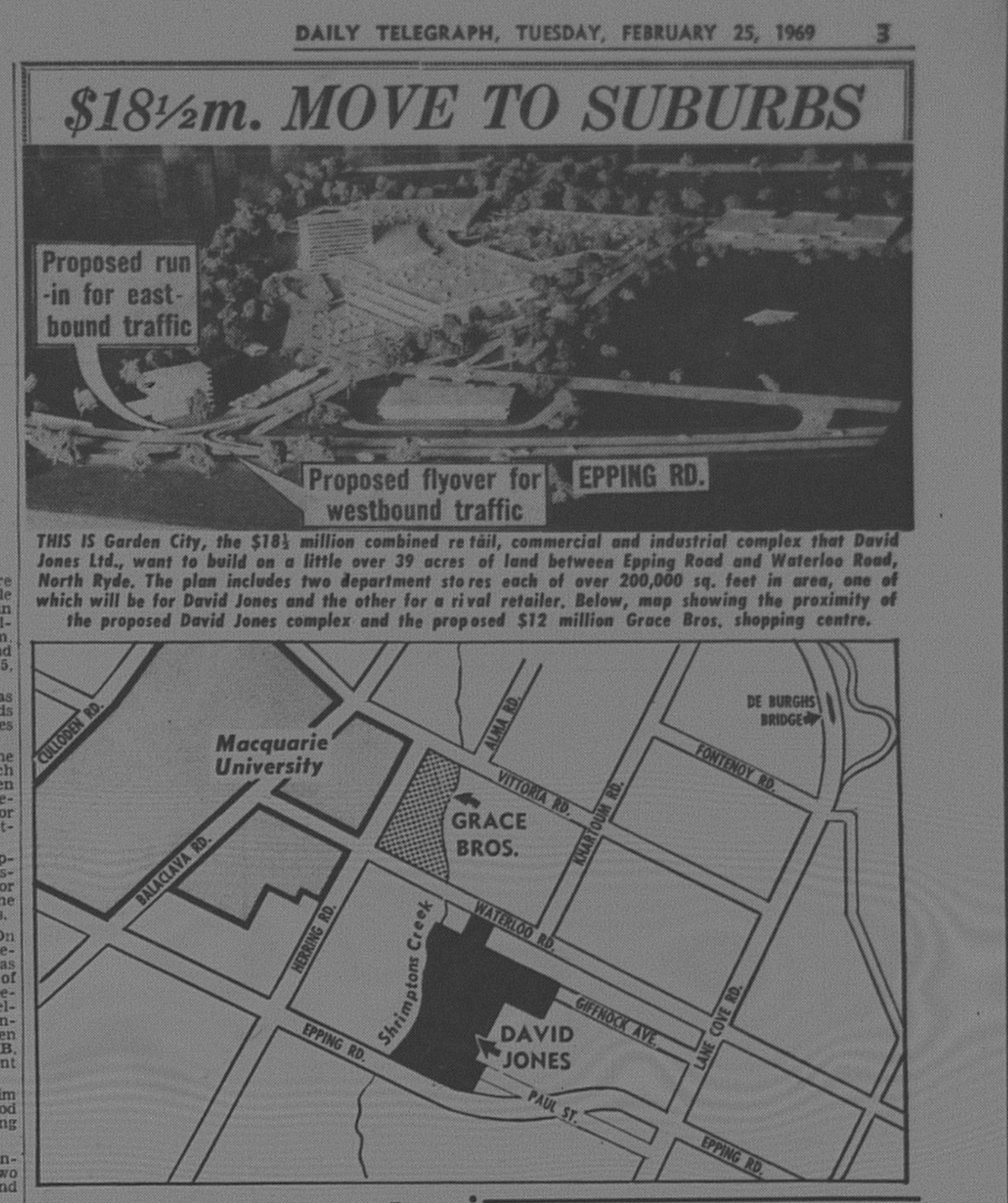 However, the big challenge for David Jones was getting approval on what was industrial land to build their shopping complex. It had to go to the State Planning Authority for approval to seek rezoning to build the centre.

The centre was designed by Donald Crone, one of the city's leading architects who had recently designed Sydney Tower. 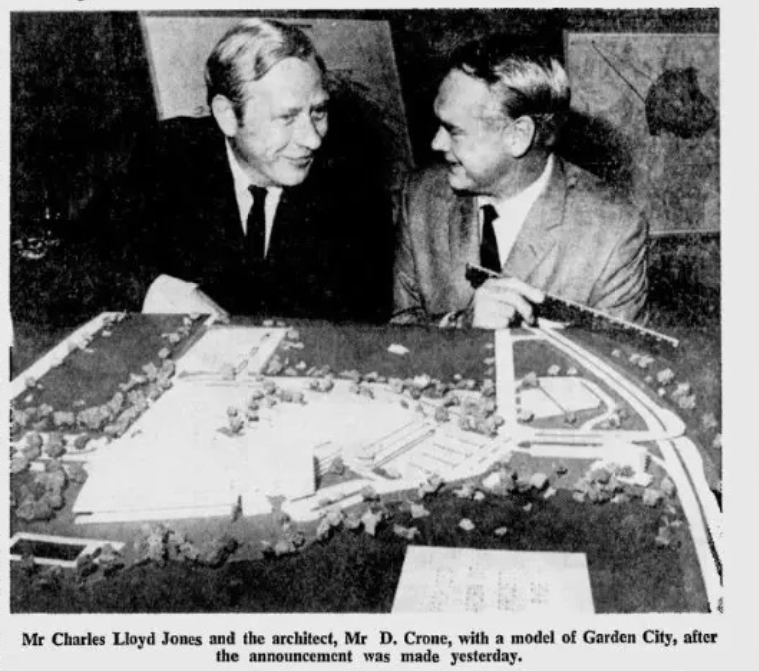 For David Jones, Garden City was going to have several advantages. Not only would have a presence on Sydney's booming north and northwestern suburbs, but it could also allow for its distribution centre to be placed alongside it, centralising operations. This would result in the distribution centre at Alexandria closing down.

And in those days as we might know, Department Store chains were very wise in developing the shopping centres themselves. Adding speciality stores to their shopping centres would allow for some extra income through rents on tenants. Roselands (developed by Grace Bros) was an example. This would be David Jones answer. Eighty speciality shops were planned just like Roselands. However, it went a few steps further. An office tower was planned and as mentioned the distribution centre.

Garden City would have provided up to 3500 jobs.

As the year progressed, Myer Corporation were also interested in operating a store in the centre through Farmers.

In November 1969, the State Government decided only to approve the Grace Bros proposal while rejecting David Jones proposal on zoning grounds. The Macquarie Centre as the centre eventually came to be known would not open until 1981. Grace Bros won the war to establish itself at North Ryde.

Had Garden City gone ahead, the retail scene at North Ryde would be dramatically different in my view. It is so hard to predict where it could have gone but I'm thinking that David Jones' centre would have ultimately prevailed because of its location - Epping Road. It had greater exposure to traffic passing through the area and better transport links.  It would have also been the second shopping centre in Sydney to have two major department stores. Warringah Mall was the only centre to have two department stores; David Jones and Grace Bros.

Grace Bros would have eventually had a store at North Ryde as the Myer Corporation took over Grace Bros in 1983 and were rebranded as Myer in 2004.

This week, I share with you an advertisement for a display home centre at Winston Hills. It was located on Caroline Chisholm Drive but homes were also on display in Latona and Ixion Streets. Nine of Australia's leading builders were showcasing their homes. The start of the 1970s were marked with 14 new homes on display. 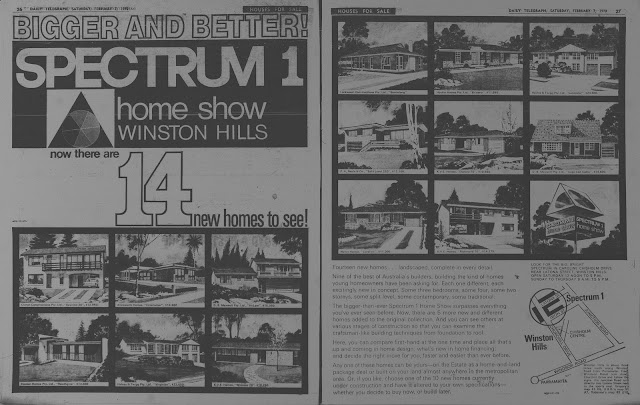 1969: Another classic plan for Manly Wharf

Back in june, I shared with you a plan to redevelop Manly Wharf with a high rise hotel. Here is a proposal from 1969 that called for a major transport interchange at Manly Wharf to replace the existing facilities. Apart from wharves and a bus terminal, they wanted also wanted helipads and a railway station. It mentions that the railway station would serve a heavy rail line running north from Manly to Newport. 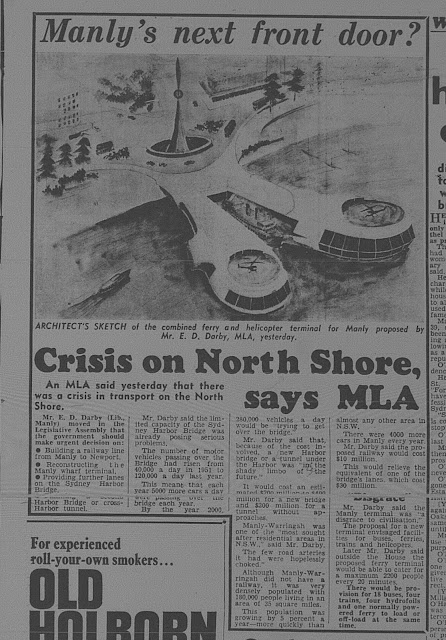 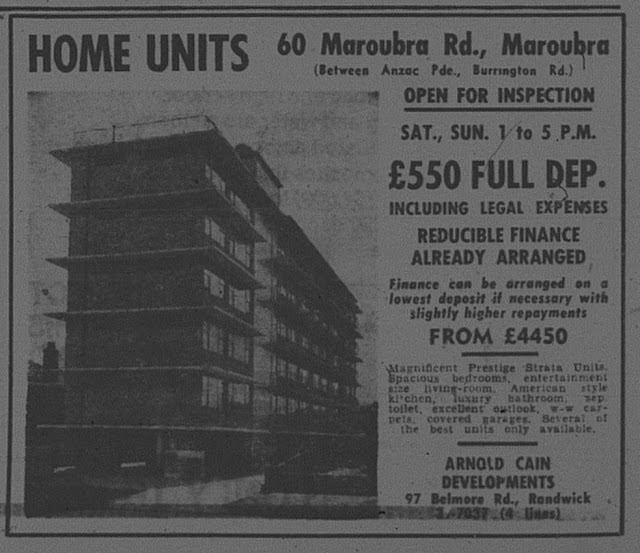