1972: The Concorde arrives in Sydney

On June 20, 1972, the Concorde made its first visit to Sydney. The Daily Telegraph managed a photo of the plane as it flew 1500 feet above Sydney's CBD by award-winning photographer, Bill McAuley. 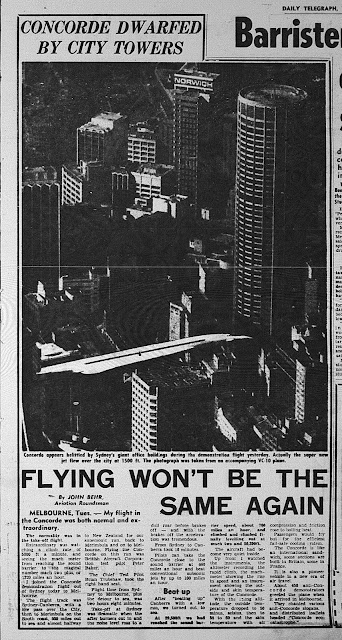 I also came across a photo of it taking off (I think) at Sydney Airport a few months ago on a Sydney history page on Facebook. People parked their cars on General Holmes Drive to get close to the action, something that would not be allowed today. I was hoping it would still be available online for this entry so people can see it.

Over the next quarter of a century, the Concorde's operated by Air France & British Airways would make occasional visits to Sydney, usually for promotional purposes or as part of world tours.

The last visit by a Concorde to Sydney was in 1999 when Air France did a world tour. Here is a video of a takeoff at Sydney Airport uploaded by Youtube member Todd Chapman. It is believed by plane enthusiasts that this flight was on September 24 1999.

Following a fatal crash of an Air France Concorde plane in Paris in July 2000 led to them being pulled out of service with the last Concorde Service in 2003 between New York and London.
Posted by Fabian Amuso at 00:00