The St George and Sutherland Shire Leader decided to dedicate a front page during the summer of 1986 to warn people of the dangers of swimming in Botany Bay. As a youngster of the (late) 1980s, I recall those simple signs reminding people of the possible dangers. Rockdale Mayor, Ron Rathbone believed that calm waters, plenty of food (fish) along with the dredging of the bay for the development of Port Botany and Sydney Airport had increased the risk of shark attack.

At the beach, were normally told to swim between the flags. Rockdale Council wanted swimmers swimming in between the nets (netted bathing pools) as a means of keeping people safe in the water. 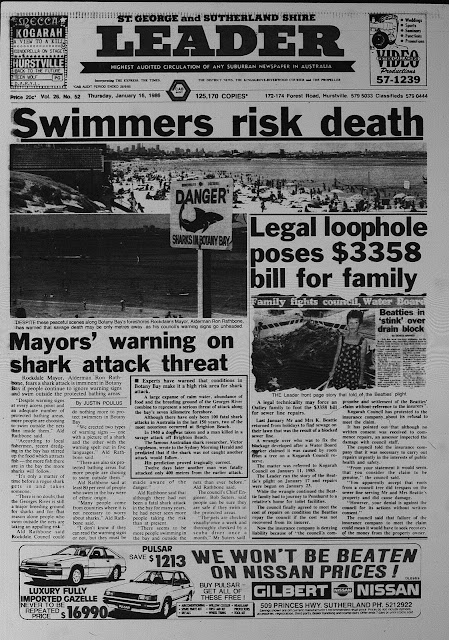 Even in the 1970s, the council was concerned. It even produced signage to alert swimmers in four languages (English, Italian, German and Macedonian). The calmer waters have always been popular with those from immigrant backgrounds, even to this day. In 1986, Rockdale Council believed that 80 % of swimmers at Lady Robinsons Beach were of immigrant background.

The risk of shark attack is still there but doesn't seem to be as of much concern as now. These days you are more likely to drown in Botany Bay due to the structure of the beach itself. A five-year boy drowned at Dolls Point in late 2013. The water depth increased sharply not too far offshore and people may not be able to see it. Currents in the bay have also played their part as well.