Property Advert of the Week: Shereline Homes: Homes of Distinction (1967)

This week I share with you, an advertisement from 1967 for Shereline Homes. They had model homes on display at Carlingford, Sylvania and Casula. Homes were priced from around $7500. According to the RBA Inflation Calculator, it would equate to about $89 000 today. 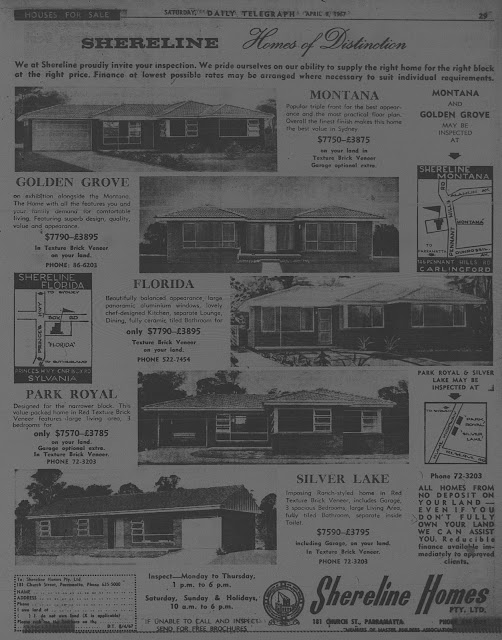 Architect Harry Seidler was keen to transform Sydney in the 1960's. A decade earlier, he had come up with his housing scheme for McMahons Point. Blues Point Tower was the only tower that saw the light of day in that scheme. By the end of the decade, he had turned his eyes to the other side of Lavender Bay at Milsons Point.

He was asked to be involved in a proposed redevelopment of Luna Park and the adjoining railyards into a major commercial centre for Luna Park (Holdings) Limited. 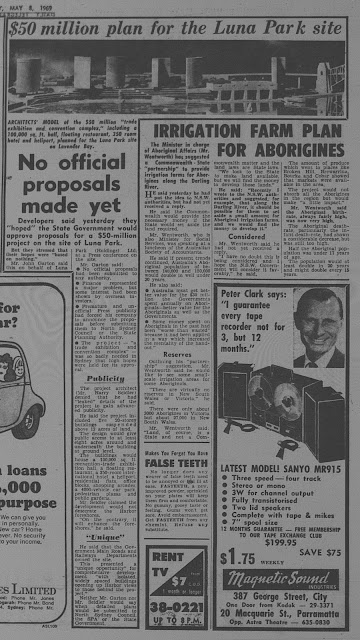 Source: Anonymous. 1969. "$50 million dollar plan for the Luna Park site: No official proposals made yet." The Daily Telegraph, May 8: page unknown.

Under the scheme, five buildings of 20 levels were to be built and "suspended" on the 12 acres the development would encompass.

Harry Seidler had to defend claims that it would desecrate the harbour foreshore. Try doing that 45 years later and there would be massive outrage.

Obviously building the International Trade City would have meant the loss of Luna Park, a notable attraction on Sydney Harbour even in the 21st century as it allows us to experience the delights of Sydney as they have done for decades before.
Posted by Fabian Amuso at 00:00 No comments:

Property Advert of the Week: The maxi plan from Glenvill Homes (1972)

This week, I share with you an advertisement from Melbourne builder Glenvill Homes as they sought to cash in the real estate boom in Sydney. Display homes were on exhibition at Westleigh, near Hornsby. 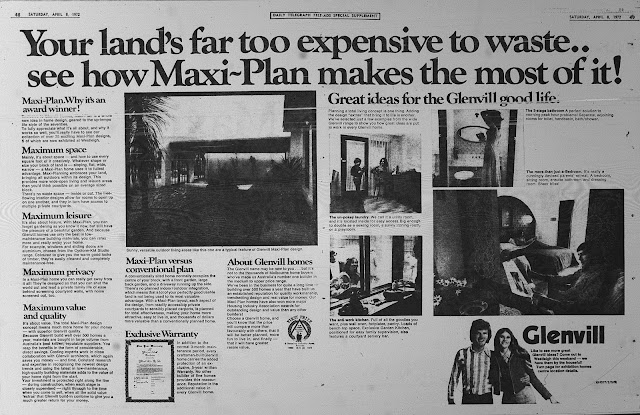 As we know, NBC was the official American broadcaster for the Olympic Games back in 2000, but there was something they didn't like about Sydney Olympic Park (Homebush Bay as it was known then).

They didn't like the sight of the power lines and put pressure on the Carr Government to get rid of them because they wrecked the views and vistas across the city from the site.

Whether or not it was NBC's that triggered the change, we know for sure they came down. If you are ever at Rockefeller Centre, New York where NBC is based, don't forget to say "Thank you" to them. Trust me the area looks great without them and speaking up did us a favour. 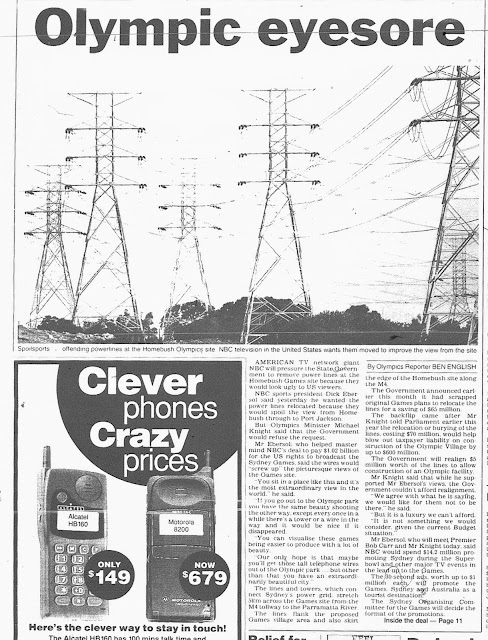 This week, I share with you an advertisement promoting house and land packages provided by Huxley Homes in September 1993 in Western Sydney. Note that Campbelltown is spelt as "Campbletown". Model homes were also on display at Homeworld II in Prospect. 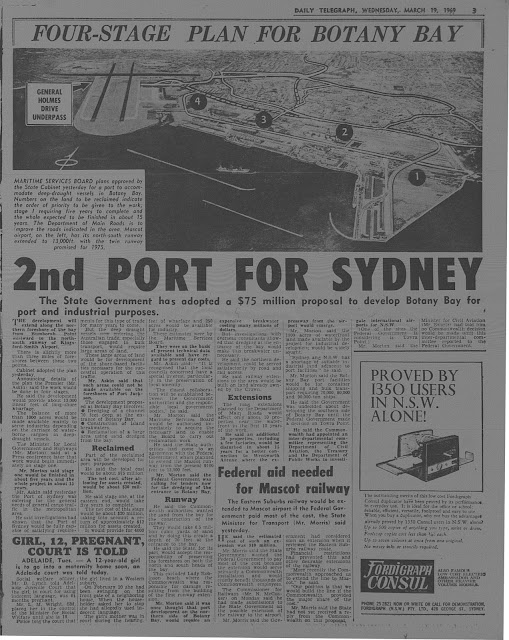 During the 1950s and 1960s there were dramatic changes to the way cargo was being transported globally. Cargo was being transported in containers and large cargo ships. Sydney Harbour's port facilities were going to be unable to cope. Hence a second port was needed. During the 1960s, the NSW Government under Robert Askin chose the northern shores of Botany Bay to build a second port for Sydney.

This is the original scheme that was planned for Port Botany, which is vastly different to what we have now.  The Airport and Port would have actually been attached to each other. There was also provision for a parallel runway at Sydney Airport to be completed by 1975 but was not built until 1994.

Stage One commenced construction in 1971 and was completed by the end of 1979.

Stages two, three and four were not built, though an expansion of the port in the late 2000s encompassed areas that would have been used for stages two and three. Dredging and reclamation works were completed in 2011, with the port gaining another 45 hectares for shipping activities. The new terminal was officially opened in July last year and is operated by Hutchinson Ports Australia.

The new terminal had to be built around the Penulyn Estuary in order to preserve it. Given the environmental issues associated with construction of the port, it is unlikely that we will see any further port expansion in Botany Bay. There has been the push to increase cargo movements in Newcastle and Port Kembla and transport it via rail to Sydney.

Also since the 1970's what was to be the second port for Sydney became the city's first port as cargo terminals in Sydney Harbour were gradually closed, starting with Darling Harbour in the 1980s, East Darling Harbour (Barangaroo) was closed in stages from the 1990s until 2007 while White Bay and Glebe Island were closed in 2008.

I notice as well that there was a plan for a road link from Southern Cross Drive at Mascot to transport traffic directly to Port Botany. That did not get built.

This week, I share an advertisement from October 1965 relating to a land release at Birrong in Sydney's south-west. The lots were located Wellington Road, Hill Road and what is now Andrew Place. 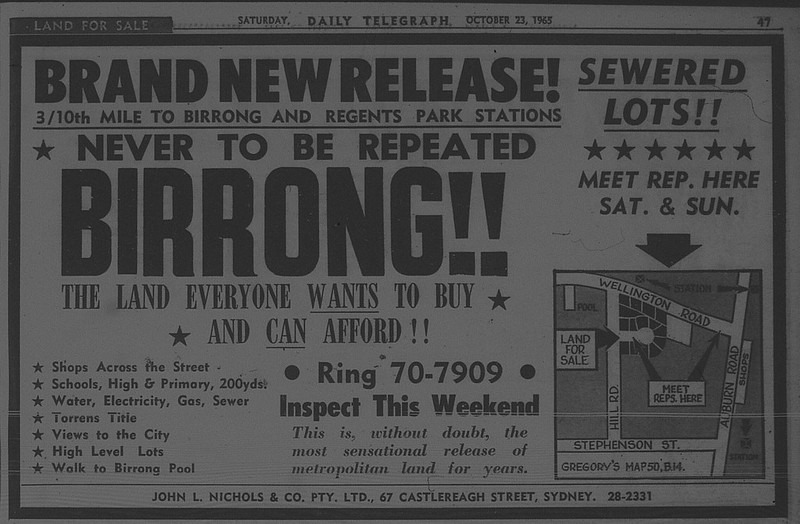 I've provided a Google Streetview link to Hill Road at the intersection of Andrew Place. Notice the distinct difference in the housing between the side of the road featured in the advertisement and the opposite side of the road. Lots of red brick homes on the sites featured. 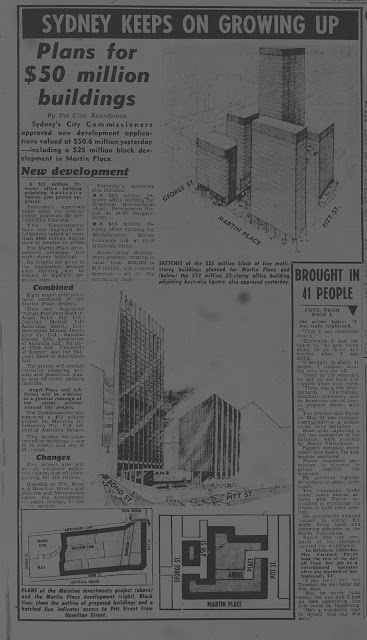 At the time, the cost was projected at $25 million (About $275 million in today's money). Extensive retail space and pedestrian plazas were to be included.

Eight "enterprises " were to be involved including AMP, Colonial Mutual Life Assurance Society (CML) and the University of Sydney.

Building heights were not specified as each site would be developed over time.

But I think about it today, and it actually was good for it to not proceed because it would have meant the loss of significant historical buildings along the northern side of Martin Place and George Street including:
The tallest of the towers featured in the concept, Angel Place was not completed until 2000. 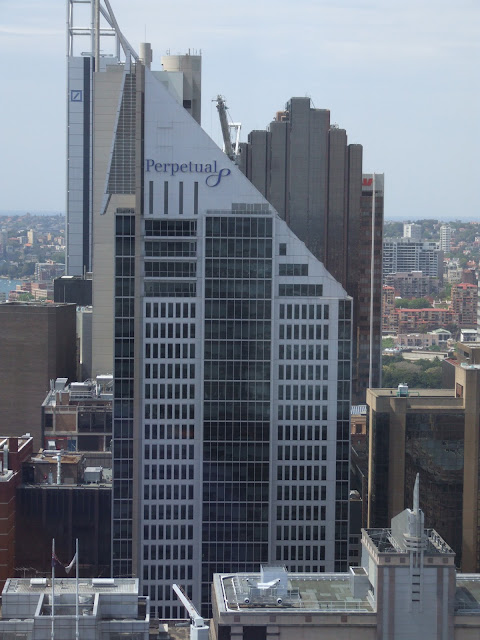 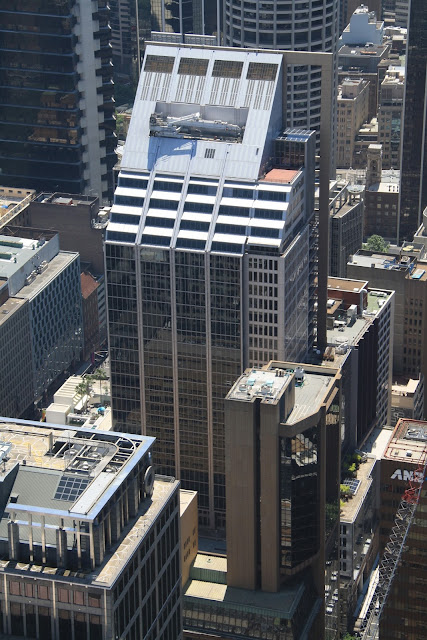 Photos were taken by the Author.

There was a plan back in the late 1980s to build Sydney's tallest tower at 244 metres tall. It was approved and was to be developed by the AMP. The recession of the early 1990s plus the collapse of the property market meant that the site would be empty for the entire decade. 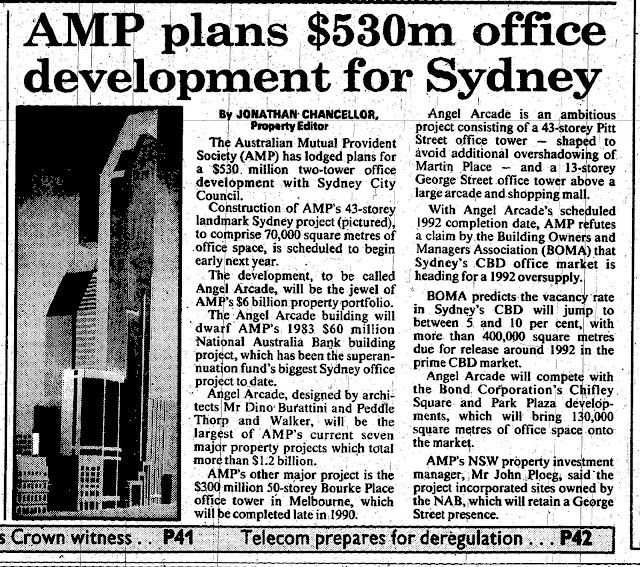 Another major highrise development that went up was the CML Building. The 21 level building was completed in 1977 to a height of 88 metres. This included retaining the original building  (14 Martin Place). 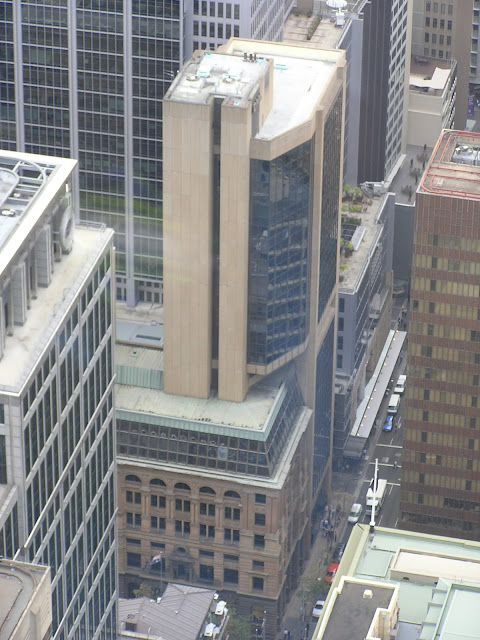 Finally for those curious about the other proposal on the page, that was an early proposal for Exchange Square which was home to the Stock Exchange until the 1990's when it relocated to the current Exchange Square Building at Bridge Street. It was a two building proposal, but they opted for the one tower which we see today. 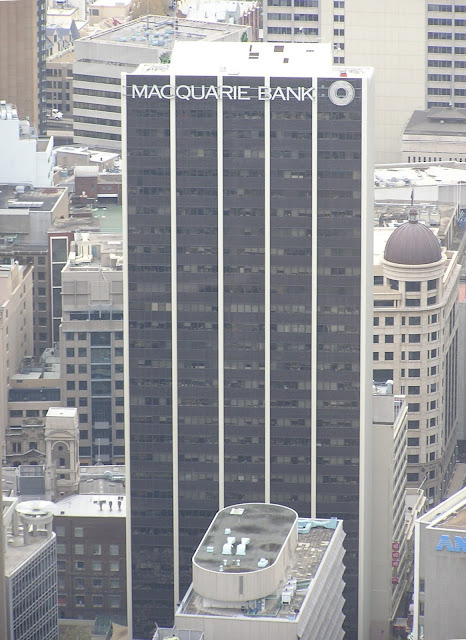 Photo taken by the Author.
Posted by Fabian Amuso at 00:00 No comments: