Normally, I'd post something within the Sydney metropolitan area, but we're heading up to the Central Coast this week. Who remembers the ads for Yeramba Estates that used to run on television and in our weekly papers. Here is a classic from 1992, when blocks of land were for sale near the shores of Tuggerah Lake. 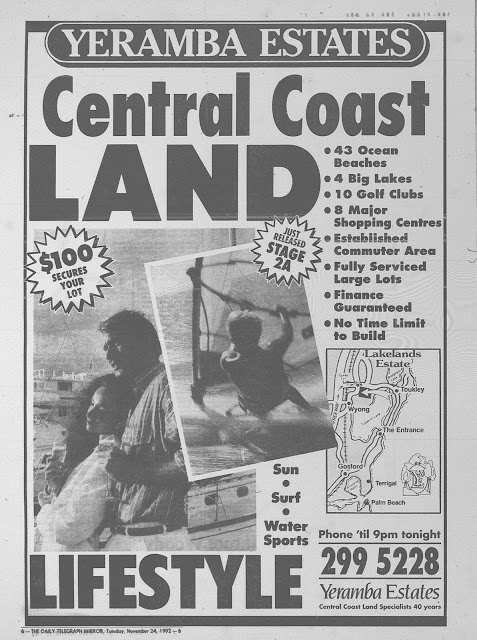 I'm posting this out more for interest's sake this week, because when I came across it, it just took me with a lot of interest, given the debate about tolls in Sydney to access roads.

I recall as a kid during the 1990s that it cost about $2 to cross the Sydney Harbour Bridge (or tunnel) which to many seemed like a small fortune.

That is pretty good compared to three dollars that the Greiner Government was proposing as a way of reducing air pollution in Sydney which was still causing headaches to all.

The toll is still $3 if you travel between 9:30am and 4pm on weekdays, and rises to $4 during peak periods (as a means of trying to reduce traffic flow). However, travel late at night or on weekends and you now pay a nice $2.50. 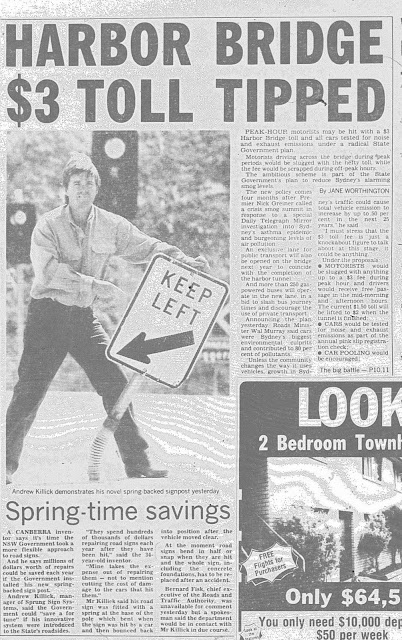 This week, we head back to 1965 when blocks of land at Riverview were on sale as part of the Riverview Estate. This comprises of the homes that are in Riverview Street, to the west of St Ignatius College, and nearby streets like Kooyong Road and Coonah Parade. 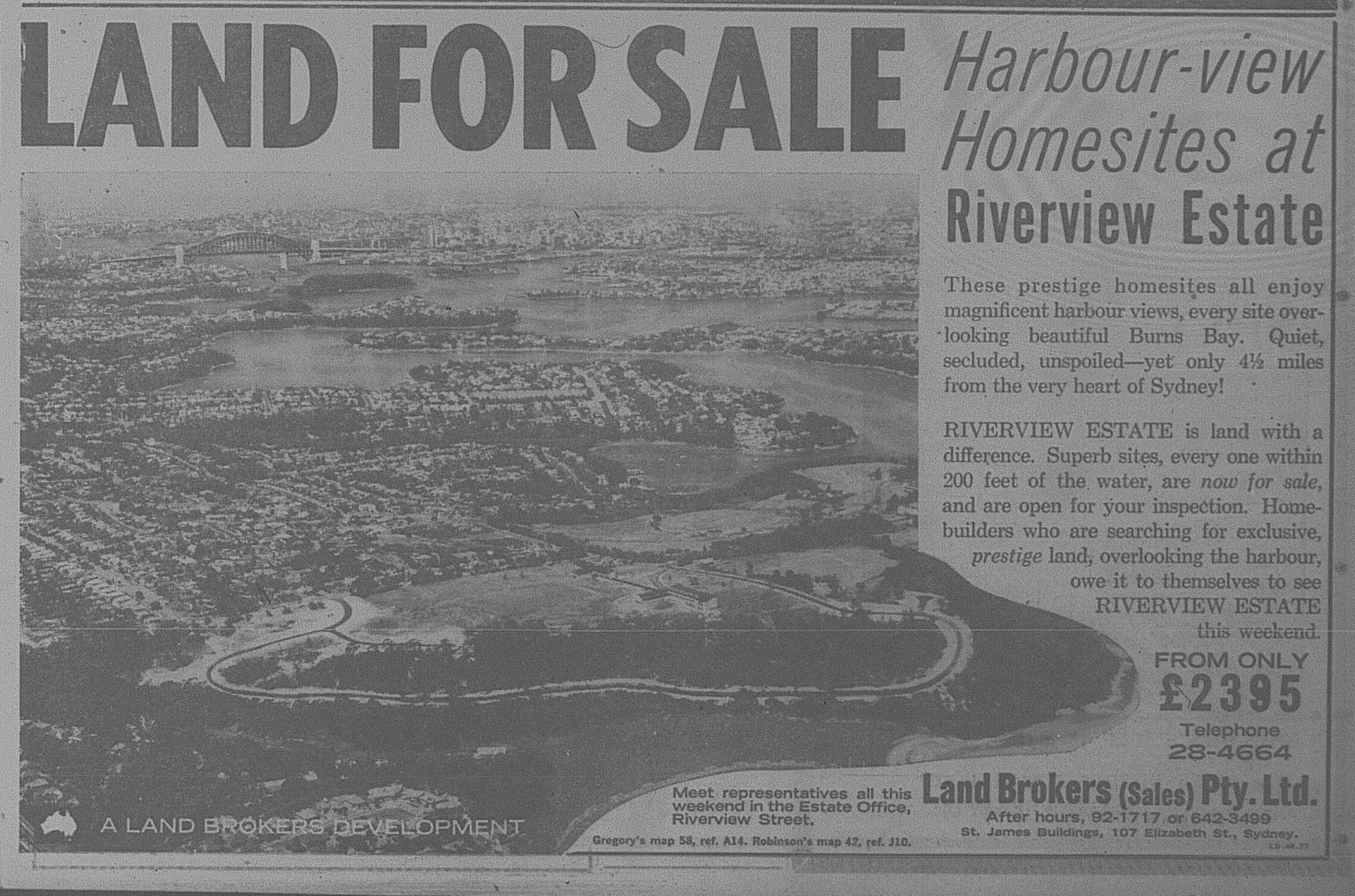 Roselands may have had its place in the hearts of Sydneysiders over the years. In order for shopping centre to survive and remain competitive, they have to respond to changing consumer trends and tastes. This has meant expanding centres to provide more retailers and services. Since 1965, there has only been one major expansion - in 1981 and an upgrade of the centre in 2000 to accommodate a modern food court (Raindrop Food Court).

However, they have faced planning hurdles, particularly with Canterbury Council. I remember in the early 2000s of a plan to construct a Hoyts cinema complex. This fell through. Another attempt for expansion a few years back was proposed. What happened to it? I don't know.

I have believed that some of the hurdles based with planning authorities combined with management practices of owners have meant that they have not able to be the benchmark for shopping centres in Sydney. It could have easily been our answer to Chadstone in Melbourne, which has been the benchmark for Melbourne shopping centres for more than five decades. Roselands has let its competition pace ahead and even centres built in more recent times would be well ahead.

A change of management has given Roselands the chance to keep up with the times. Federation Centres currently manage the complex. Earlier this year, they unveiled plans for a major upgrade and expansion of the centre to include an expanded retail offering. Myer (originally Grace Bros) will also reduce its footprint from three levels to two, with the lower floor to accommodate new retailers. The cinemas would be built above Myer.

The expansion will also see the introduction of another major discount department store (BigW), Woolworths Supermarket and Kmart store. The expansion will cover the southern parts of the site, where open-air carparks occupy space (on a normal day, they are empty). It will mean that Roselands Drive will be realigned along with Martin Street to cater for expansion

I hope it goes a fair way to bringing back the 'mojo' that Roselands once bought to Sydney, but that opportunity to remain or even regain the place of Sydney's shopping jewel is all but gone.
Posted by Fabian Amuso at 12:40 No comments:

Sydney's northern beaches may be out of reach for those who want their dream home, but half a century ago, a seventy-five pound deposit got you a block of land in Maralinga Avenue, Elanora Heights. 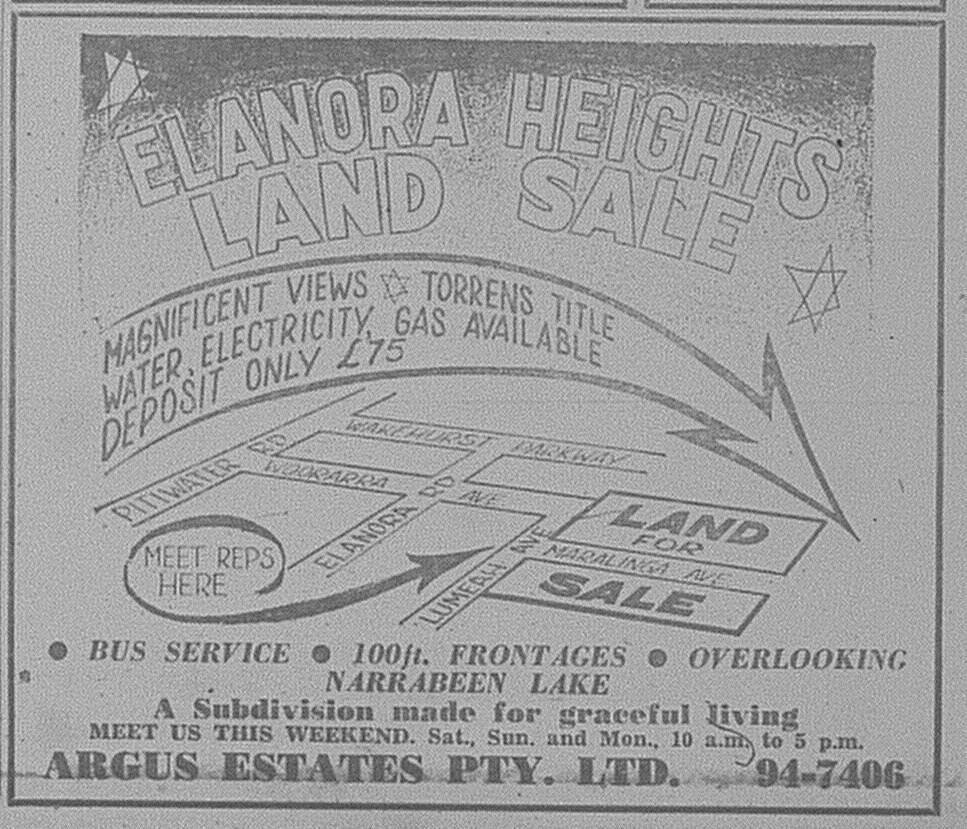 Last week, I shared with you some of the advertisements promoting the opening of the Roselands Shopping Centre in 1965. Today, I will share some clips of the opening on October 11 1965.

The centre was opened by Premier Robert Askin on October 11. 6000 guests were invited to the ceremony. In his address, Askin said that the opening was "historic" and reflected Grace Bros commitment to Sydney. Grace Bros Chairman B. A. Grace in his address said that Roselands was the "greatest and boldest" step ever taken. 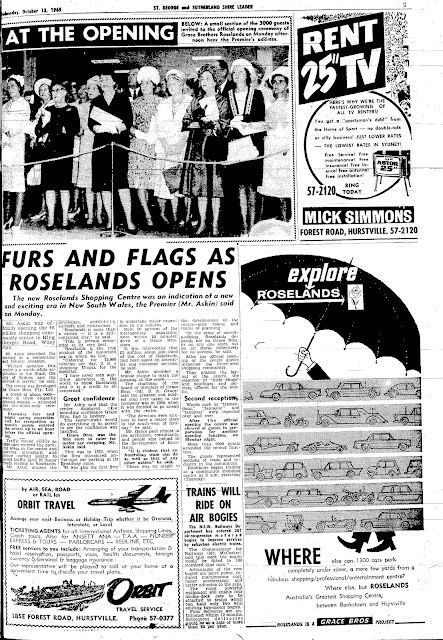 When Roselands opened the following day to the public, 70 000 were reported by The Sydney Morning Herald to visited the centre during the first day of trading. Police reported that there was congestion on nearby roads as the hordes descended to inspect the new centre. Shops had to be closed because they could not cope with the crowds. 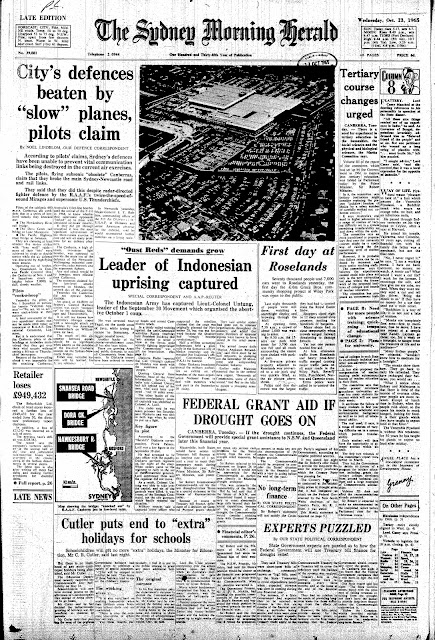 Key Facts at the time of opening

In 1966, Stocks and Holdings had several blocks on offer at Fairfield Heights for just a ten pound deposit and claimed at the time to have the cheapest housing lots in Sydney.The blocks on land appear to have been on sale to the east of what is now the Cumberland Highway at Smithfield. 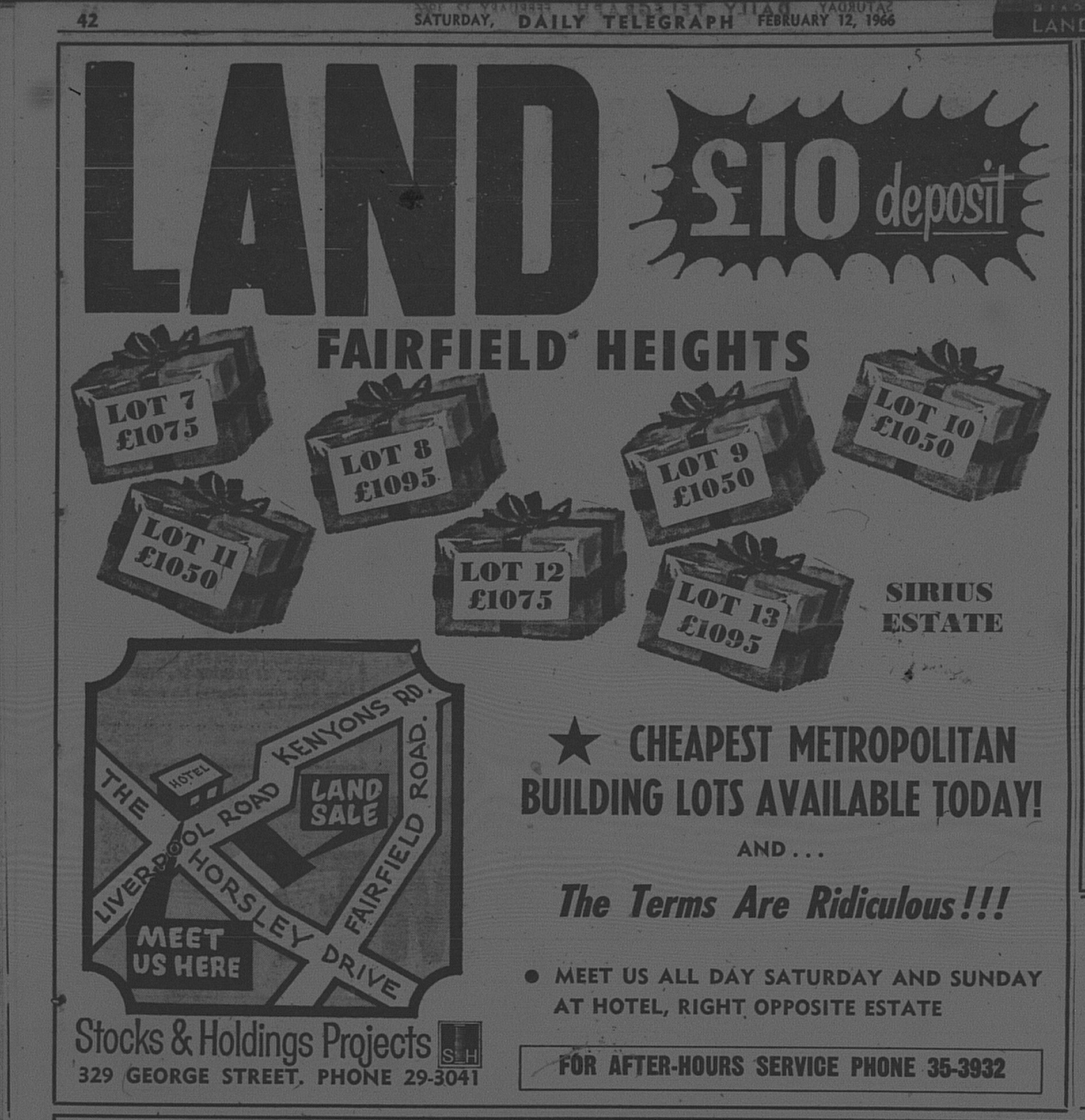 I'm going to present a special series as we mark fifty years since the opening of Roselands Shopping Centre.

There is a plethora of material that I have amassed, so I might as well split it into several parts. Next week I'll look at the opening of the centre itself. And then we have to ask ourselves, how did we get this to happen, where it is now and where to from here.

This week I'm going to share with you a selection of advertisements that were promoting the centre itself as opening day neared.

An official invitation is needed of course. 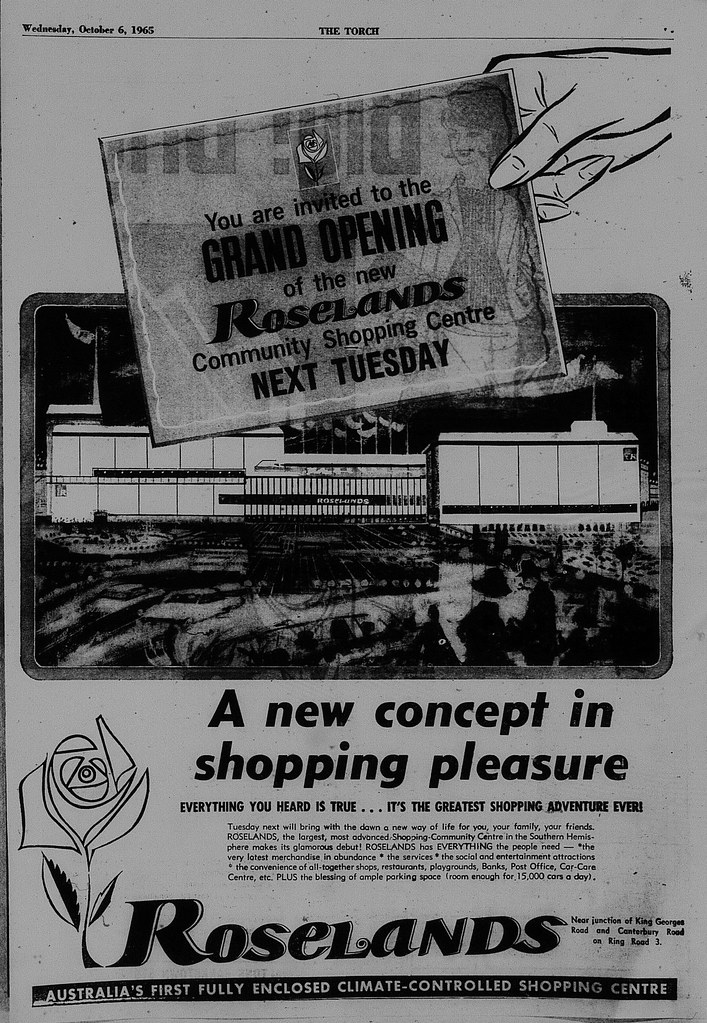 This two-page advertisement (Below) was loaded with illustrations which gave Sydneysiders an overview of what to expect. 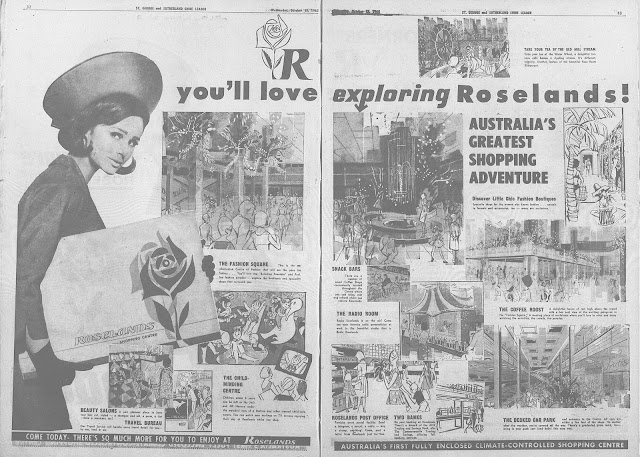 Months before the opening, tenants were being sought. 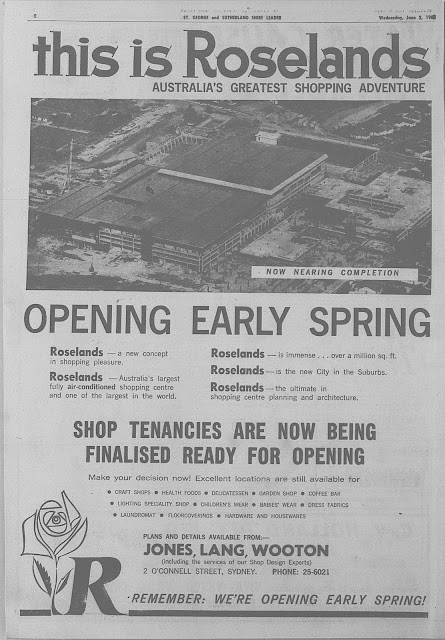 This one was an official advertisement by Grace Bros to promote their Roselands Store. 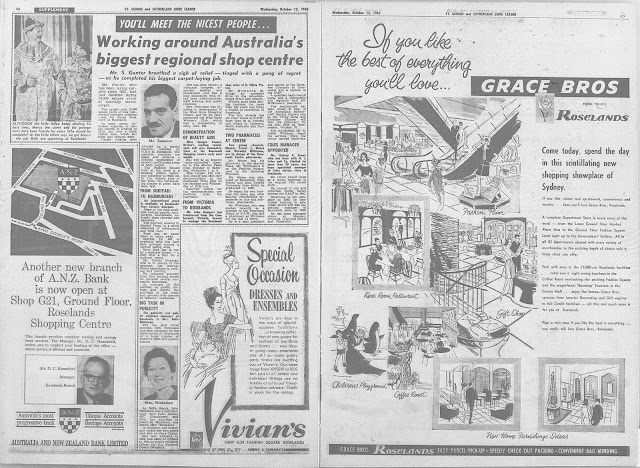 Roselands pioneered Food Courts inside major shopping centres through its "Four Corners" food court, where one could eat their way around the world. 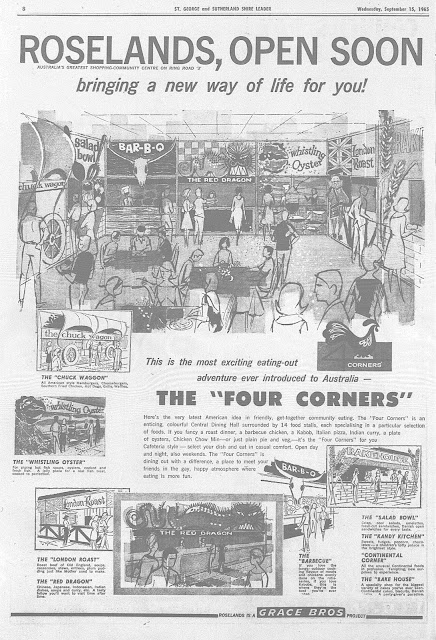 Another two page advertisement from The Daily Mirror. It included a map. Grace Bros were strategic in where to place it, not just in a booming suburbia but also to make sure that it was in reach of as many people as possible. 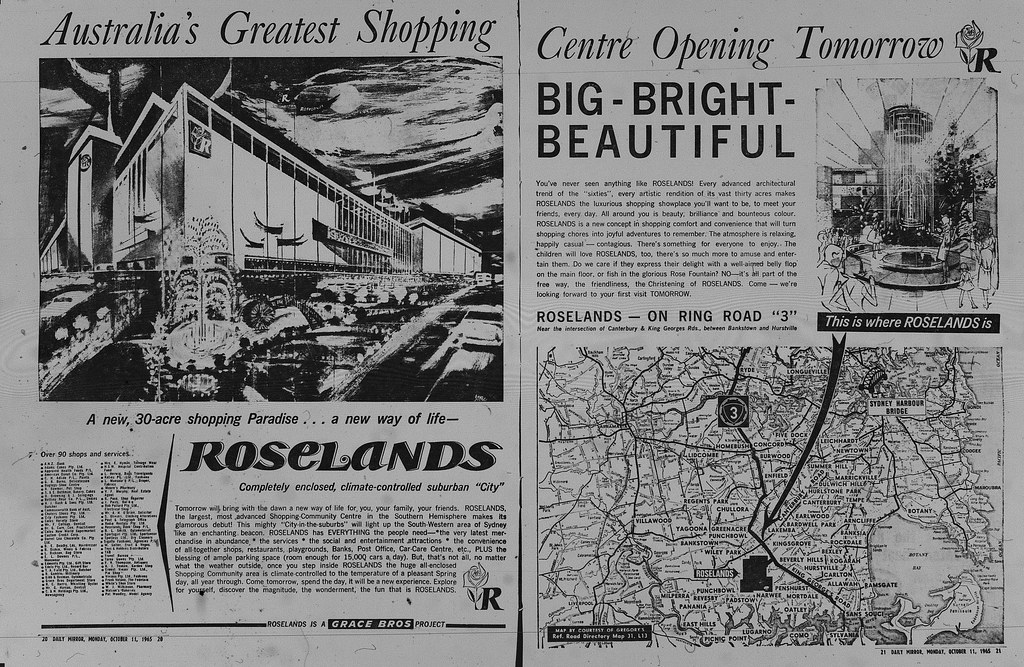 Finally, this ad told you how far you were from Roselands by car. 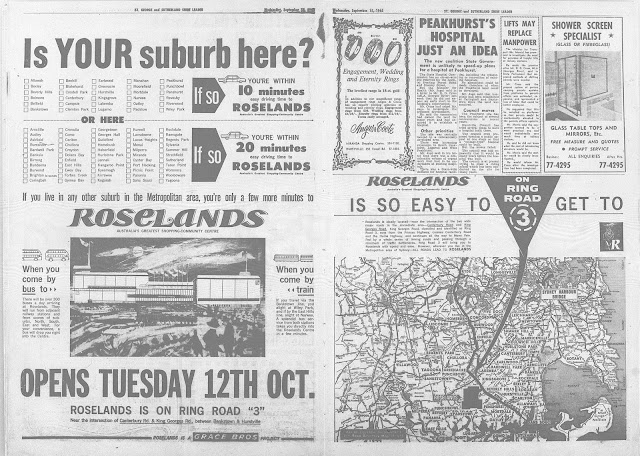 Next Monday is the 50th anniversary itself and we will look at opening day.

Property Advert of the Week: The Peak, Haymarket (1997)

Our Property Advertisement of the week is for apartments at The Peak in Haymarket in 1997. The tower itself had been completed just the year before. Penthouses were going for $2 million. 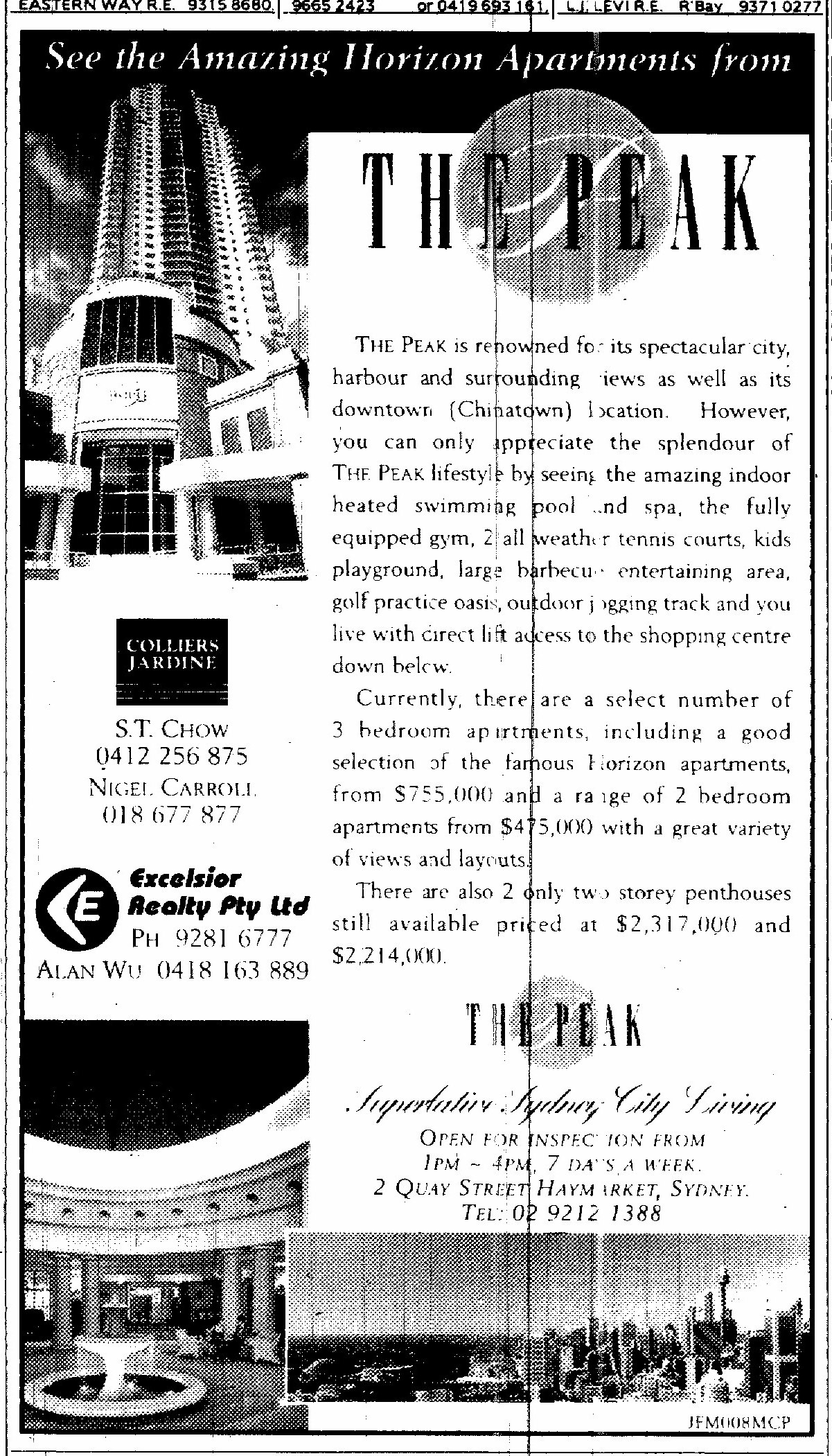