As part of the North Sydney Traffic Management Plan, a section of Mount Street from Miller Street through to Denison Street was closed off to traffic for shoppers in North Sydney but also to separate the through traffic from the local traffic. Instead of using Mount Street to access the Warringah Expressway from the Pacific Highway, motorists would be diverted one block north at Berry Street. This arrangement remains today. 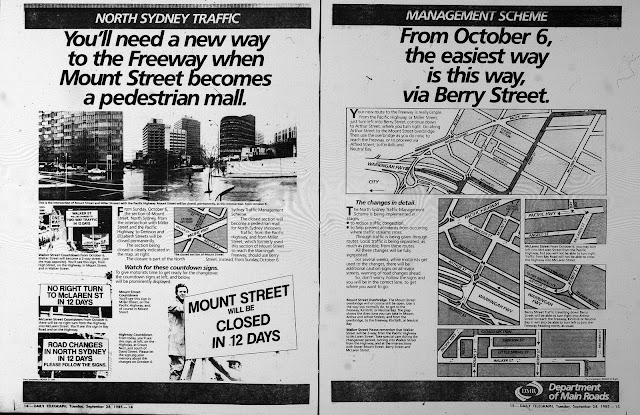 This week, I share with you an advertisement for Kingston Heath Apartment Tower which was part of the Raleigh Park development.

Note that Westfield was involved in its development, interesting given it is considering the construction of apartments above its shopping centres. 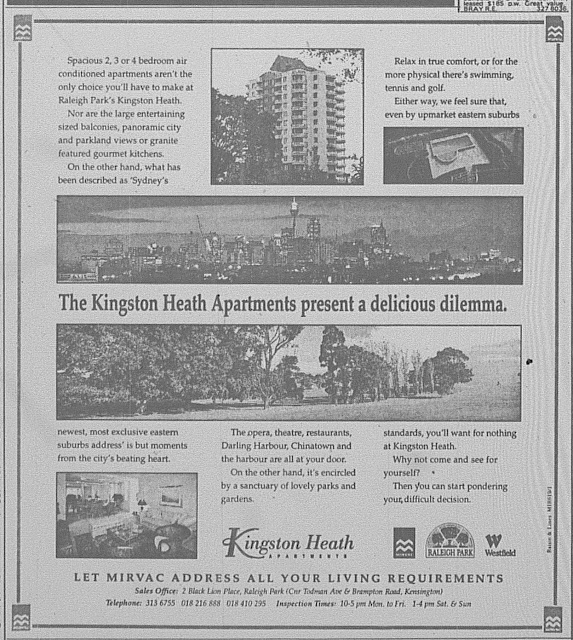 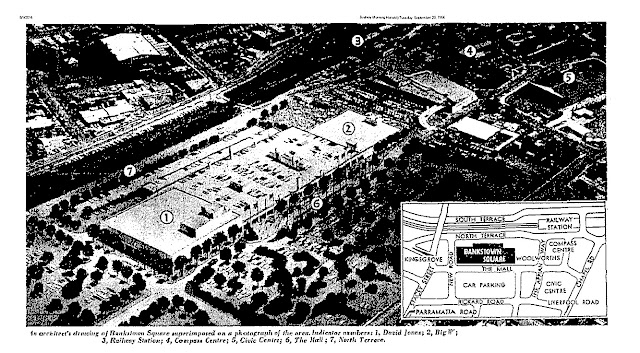 Today, Bankstown Central (formerly known as Bankstown Square) turns fifty. In 1966 there was a much fanfare when its doors opened for the first time to shoppers. Back then, it had the title of the biggest shopping centre in Australia, with more than 100 shops. It had seized the title from nearby Roselands, which itself had opened just 12 months before.

The centre was officially opened by Lady Cutler (wife of NSW Governor Sir Roden Cutler) on September 21, 1966. Lady Cutler Drive was named in her honour.

I'll keep it simple with a random assortment of clippings from The Torch which produced a special edition one day before its opening on September 20, 1966.

The first clipping is a two-page spread documenting its construction, which occurred over a two year period. 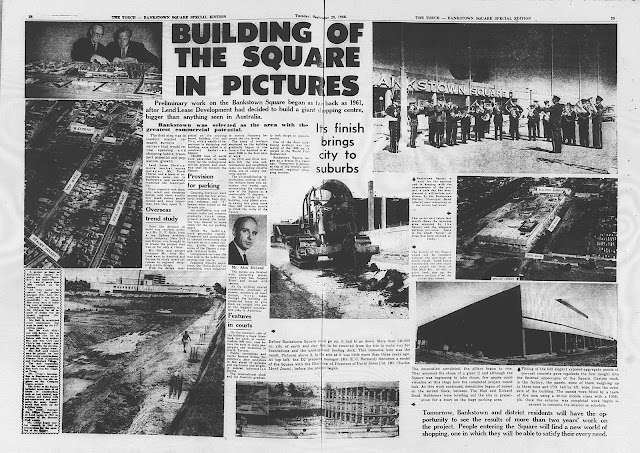 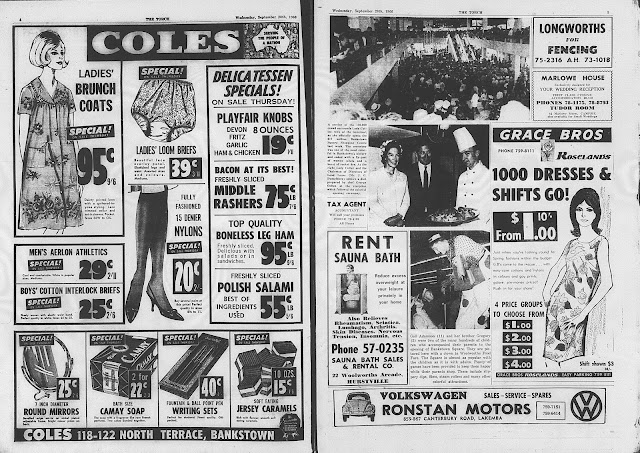 I have included an editorial from the September 21, 1966, edition of The Torch which was the opening day

The St George and Sutherland Shire Leader published a map in its September 21 edition. 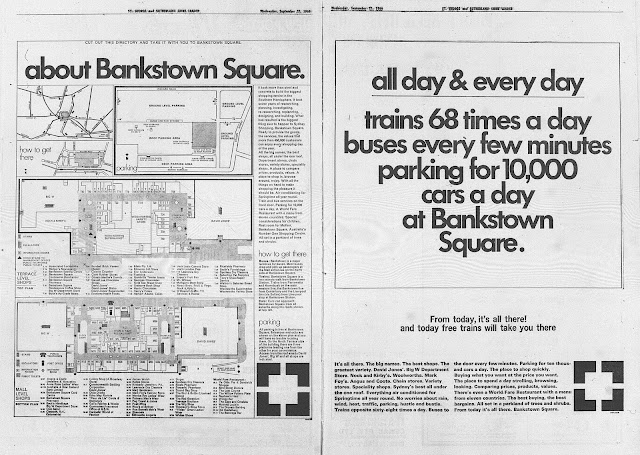 Below are some advertisements for some of the major retailers: 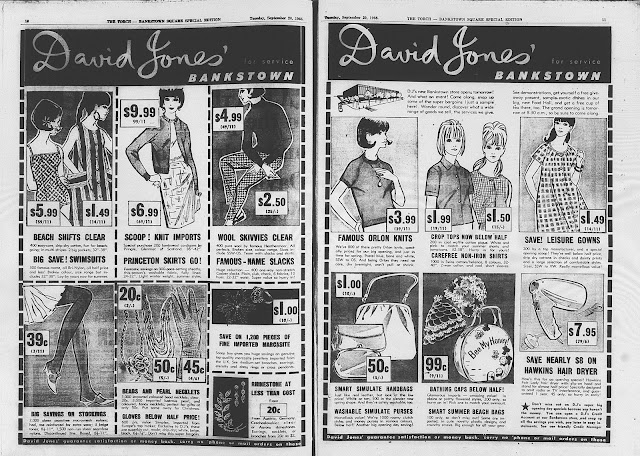 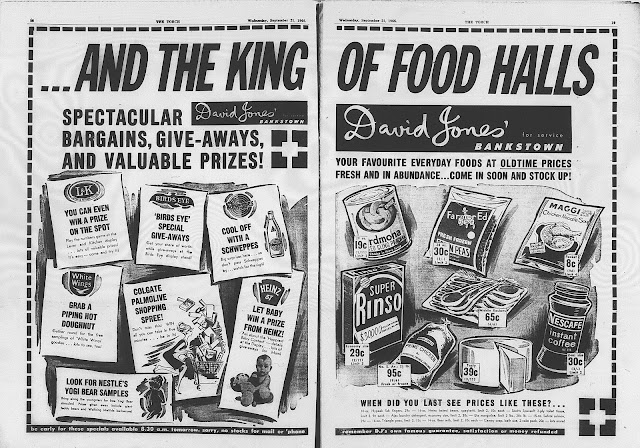 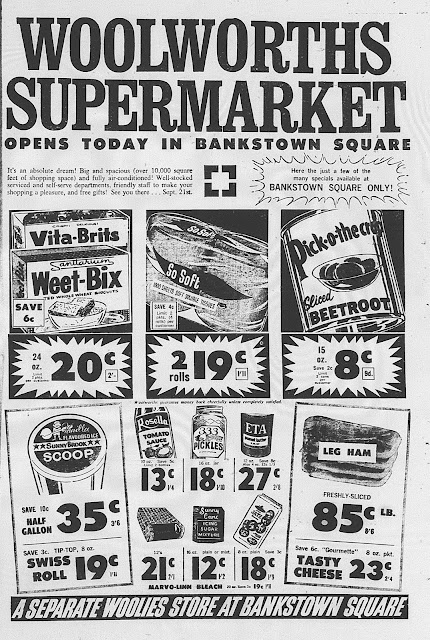 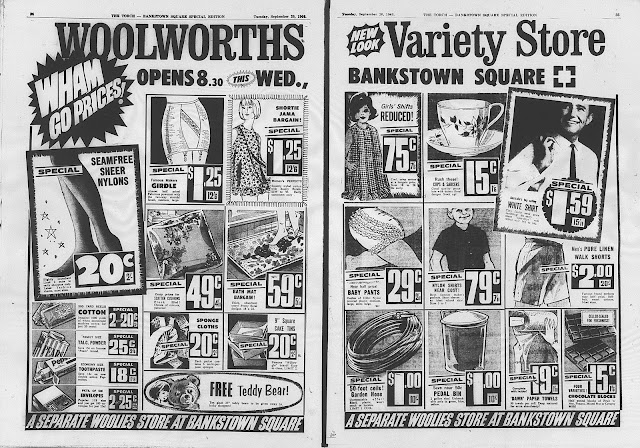 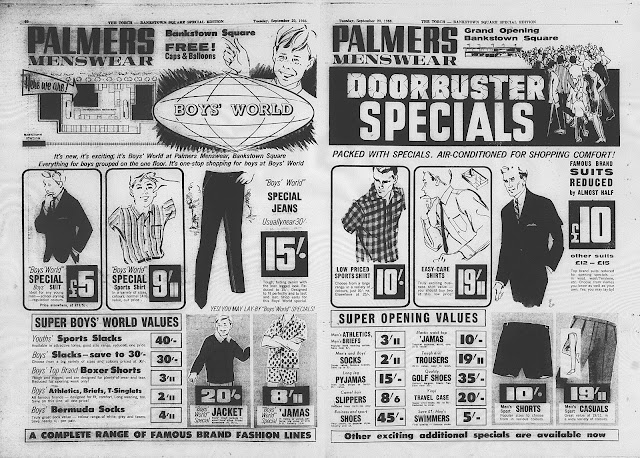 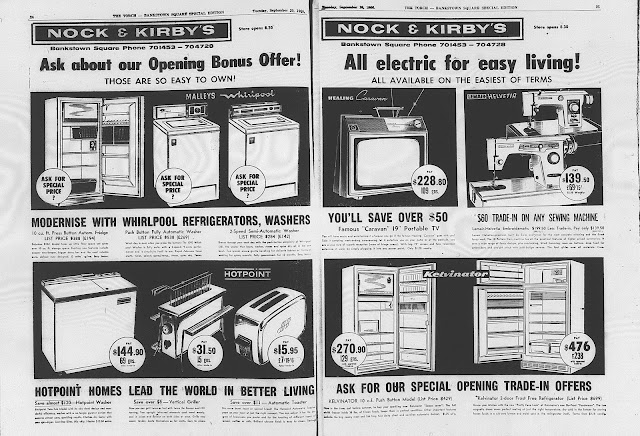 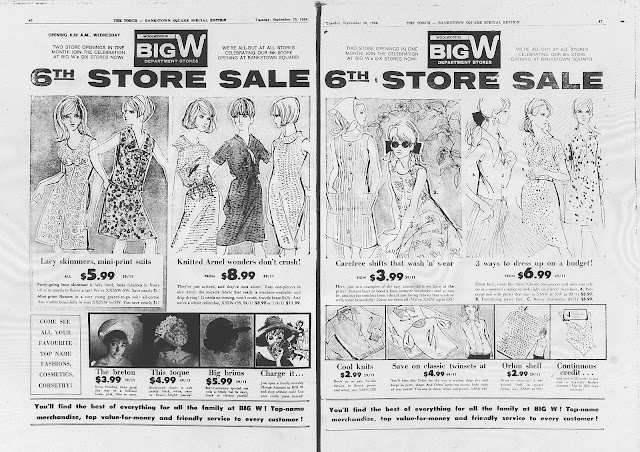 This week's property advertisement is from Stocks and Holdings dating back to October 15, 1966. Yes prices are listed in pounds, even though dollars and cents was our legal tender. For two years from 1966 to 1968, items could still be listed for sale in pounds, shillings and pence. 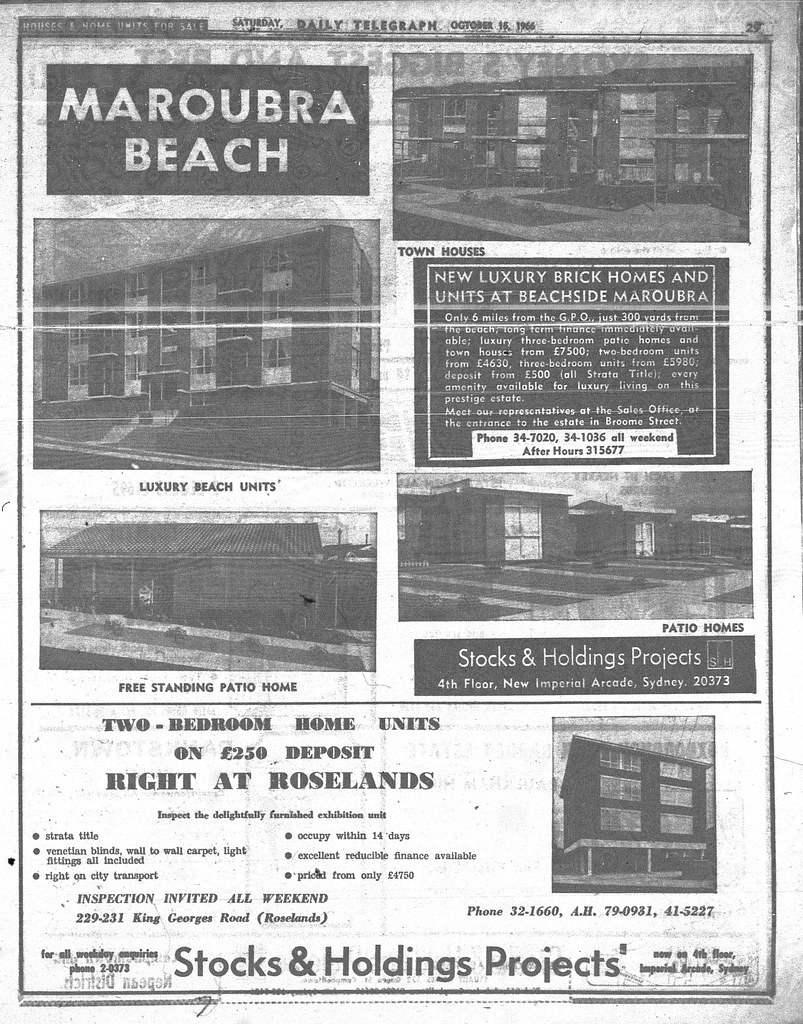 This week, television in Australia will turn 60 and this entry will focus on the channel which began it all - TCN9, which is part of the Nine Network.

In 1955, Television Corporation (owned by Sir Frank Packer) was one of two consortiums that were successfully awarded television licenses for Sydney. The other licencee Almagated Television Services would form ATN7 which began broadcasting in December 1956. The Packer family would own TCN9 until 2006 when as part of the Nine Network, it was sold to private equity firm CVC Asia.

After test transmissions from July 1956, TCN9 commenced regular programming on September 16, 1956. The first show "Welcome to Television" screened at 7pm and was hosted by Bruce Gyngell who uttered the lines "Good evening ladies and Gentlemen. Welcome to television." It is believed that only 2000 homes had a television set at the time. Thousands, however, had to watch proceedings through shop windows that had TV Sets on display.

Reception stretched as far north as Newcastle and Cessnock, south to Wollongong and west to Katoomba. These days you would need a booster aerial in Newcastle to receive Sydney television stations.

During this early period, TV Broadcasts were generally in the evening. On opening night, transmission closed at around 9:15 pm. Here is a clipping from Page 8 of The Sunday Telegraph on September 16, 1956.

Below are some clippings from The Daily Telegraph dating to September 17 and 18 1956 which was also owned by Sir Frank Packer and took advantage to show off his new toy. 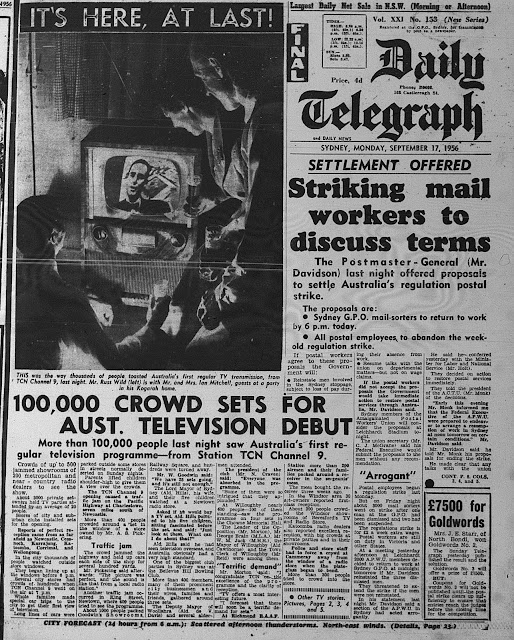 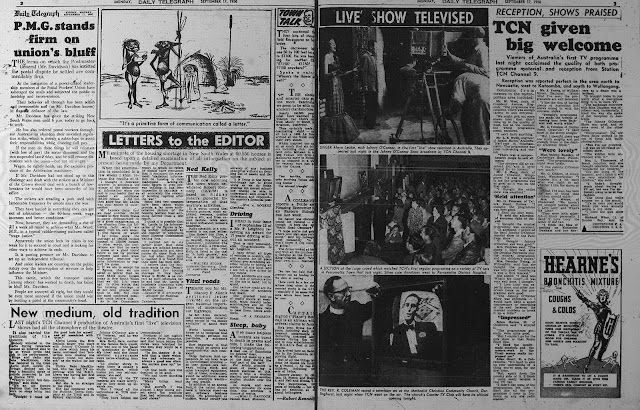 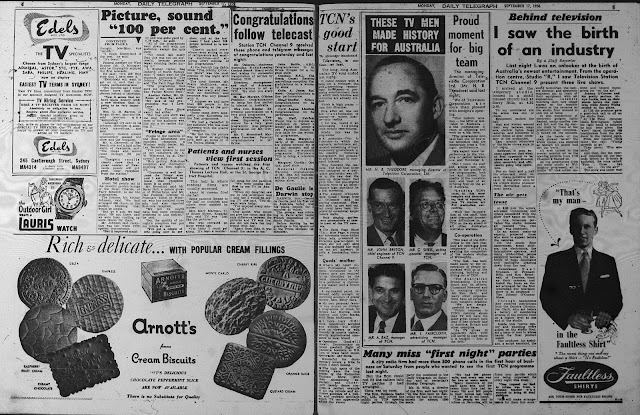 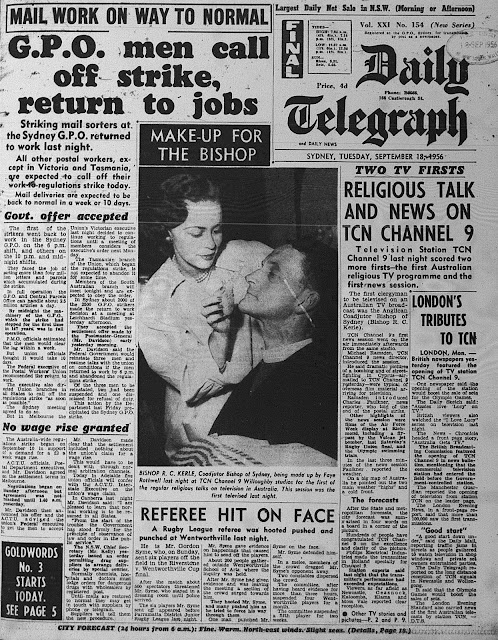 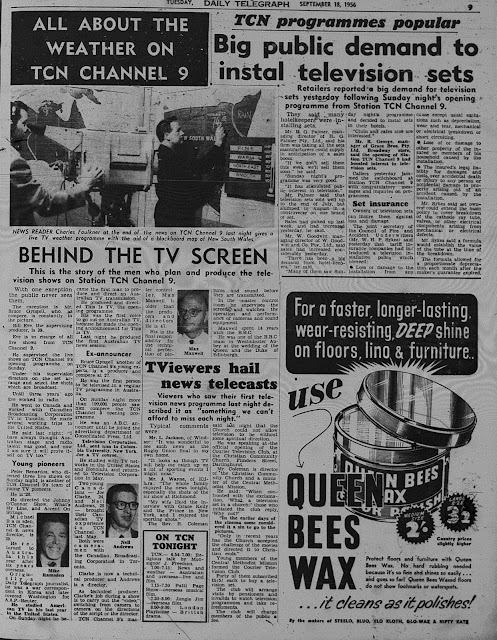 Time for another classic advertisement from Meriton. This one is for the Newington Towers Complex at Maroubra. dating back to 1997.

1974: The battle to save beachfront homes at Bilgola Beach

I was motivated to do this entry after what occurred back along the beachfront at Collaroy in June. Ten homes fronting the beach were threatened with collapse after heavy swells caused by an East Coast Low eroded the beachfront.

The East Coast Low of May 25-26 1974 (known as the Sygna Storm) is regarded as the most ferocious storm to ever strike Sydney.  The city was pounded by heavy rain, strong winds (up to165km/h) and record swells of nine metres along the city's coastline. the worst damage was reported on the city's beaches, which were heavily eroded. The following fortnight saw another two East Coast Lows hit the city, which only worsened erosion.

The worst hit area was at Bilgola Beach, where homes in June 1974 were threatened with collapse which was quite similar to what happened at Collaroy this year. Below is the front page of the  June 5, 1974, edition of The Manly Daily. 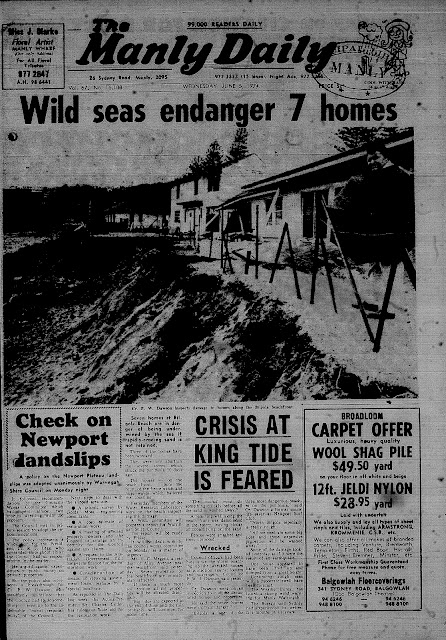 A seawall was built (presently under the dunes) to protect the homes. Fortunately, they were saved as this front page clipping from The Manly Daily of June 12, 1974, shows below. 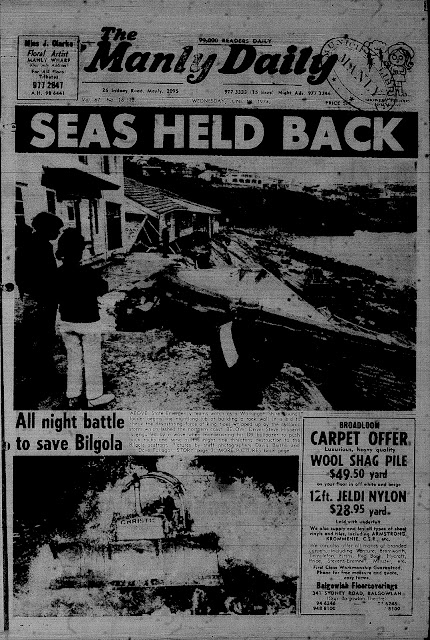 An almost intact pool fell into the sea, just like at Collaroy earlier this year. 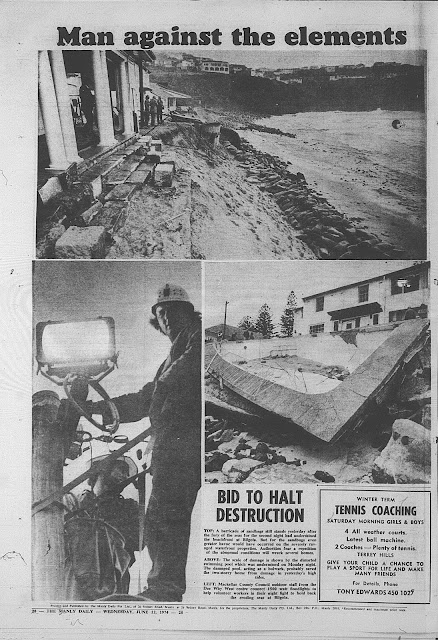 It is inevitable that the homes on the beachfront will be threatened again in the future as natural processes reshape the beachfront and retreat inland. There is no date for when it will happen, but luckily locals have not had to deal with the threat of losing their beachfront homes since that storm.

This week, we head to Brighton-Le-Sands when in 1974 apartments in the newly completed President Towers were available for sale. Four decades later, those views cannot be built out due to restrictions on building heights for developments along The Grand Parade by Rockdale Council. 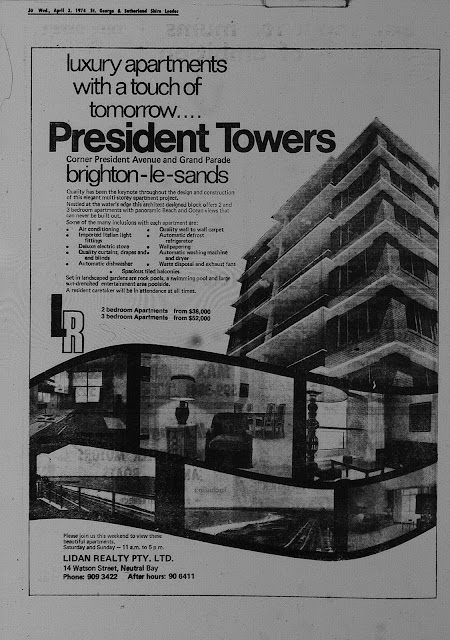