In the last of our current Remember This? series, below is a Page 1 feature from the September 9, 1964, edition of The St George and Sutherland Shire Leader reporting on the development of the new housing estate at Sylvania Waters and Captain Cook Bridge. 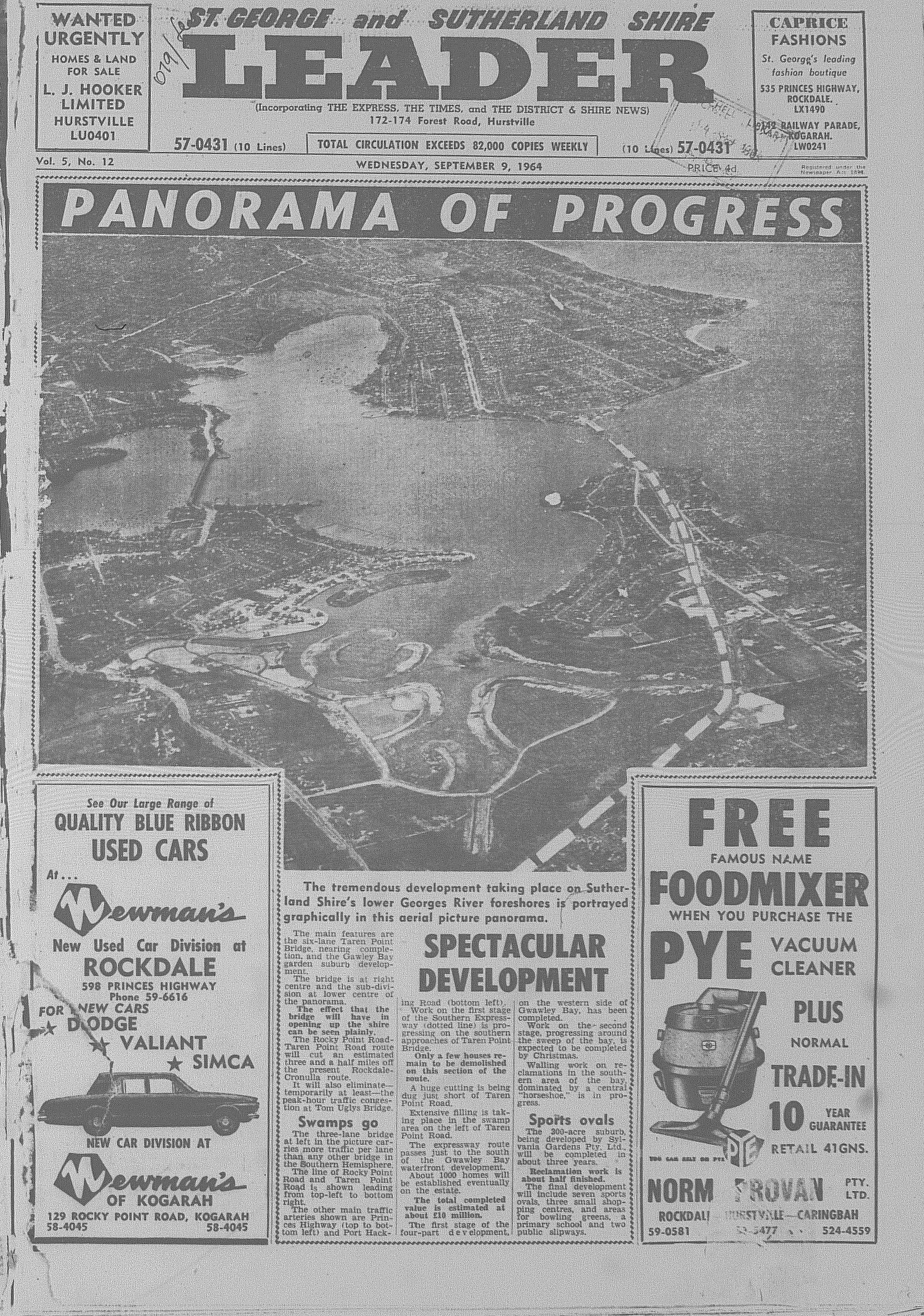 On Friday, our nation will mark Australia Day. While it marks the 230th anniversary of the First Fleet landing in Sydney Harbour and the commencement of the colonisation of the Australian continent. It is also the day that Sydney and NSW were founded. 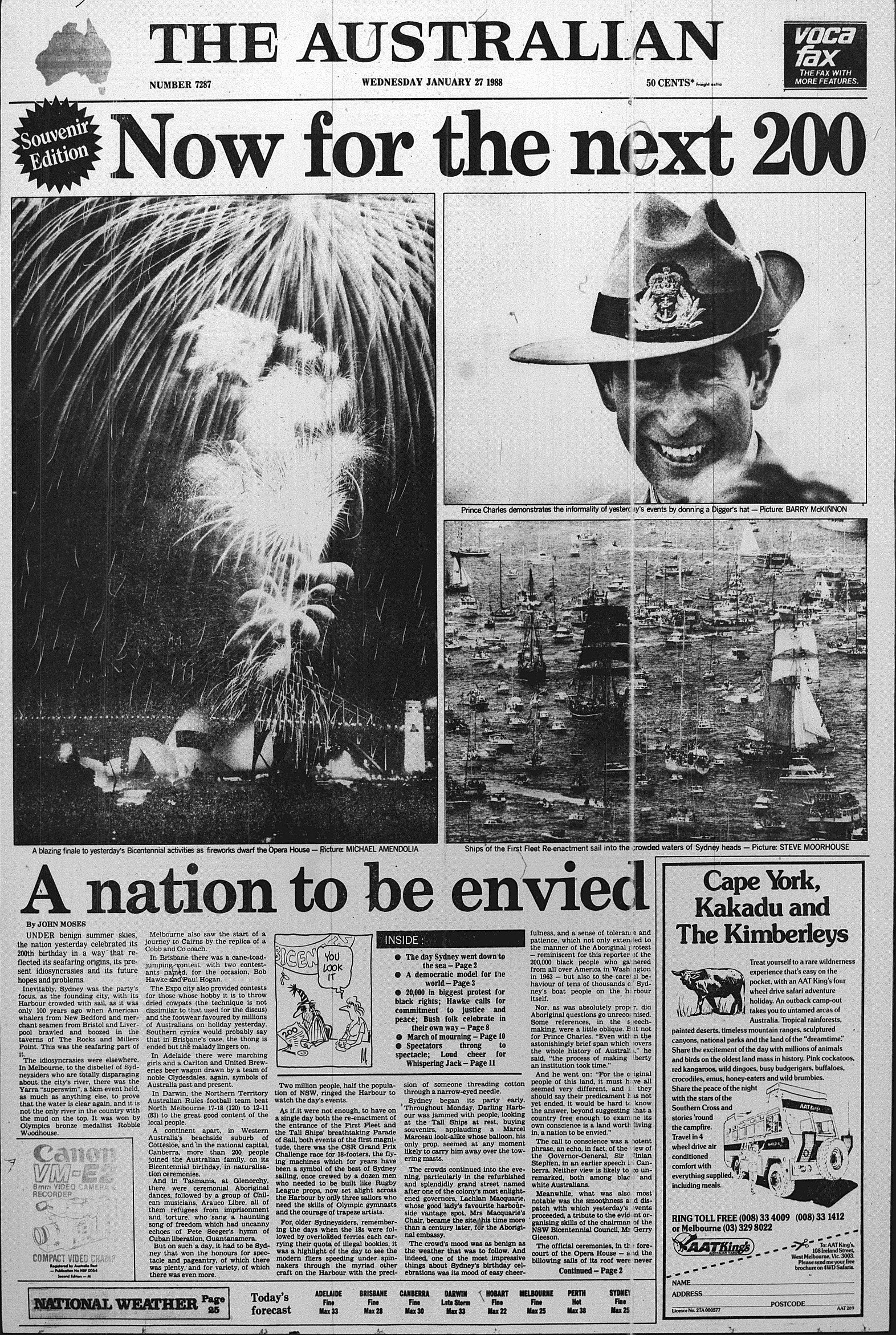 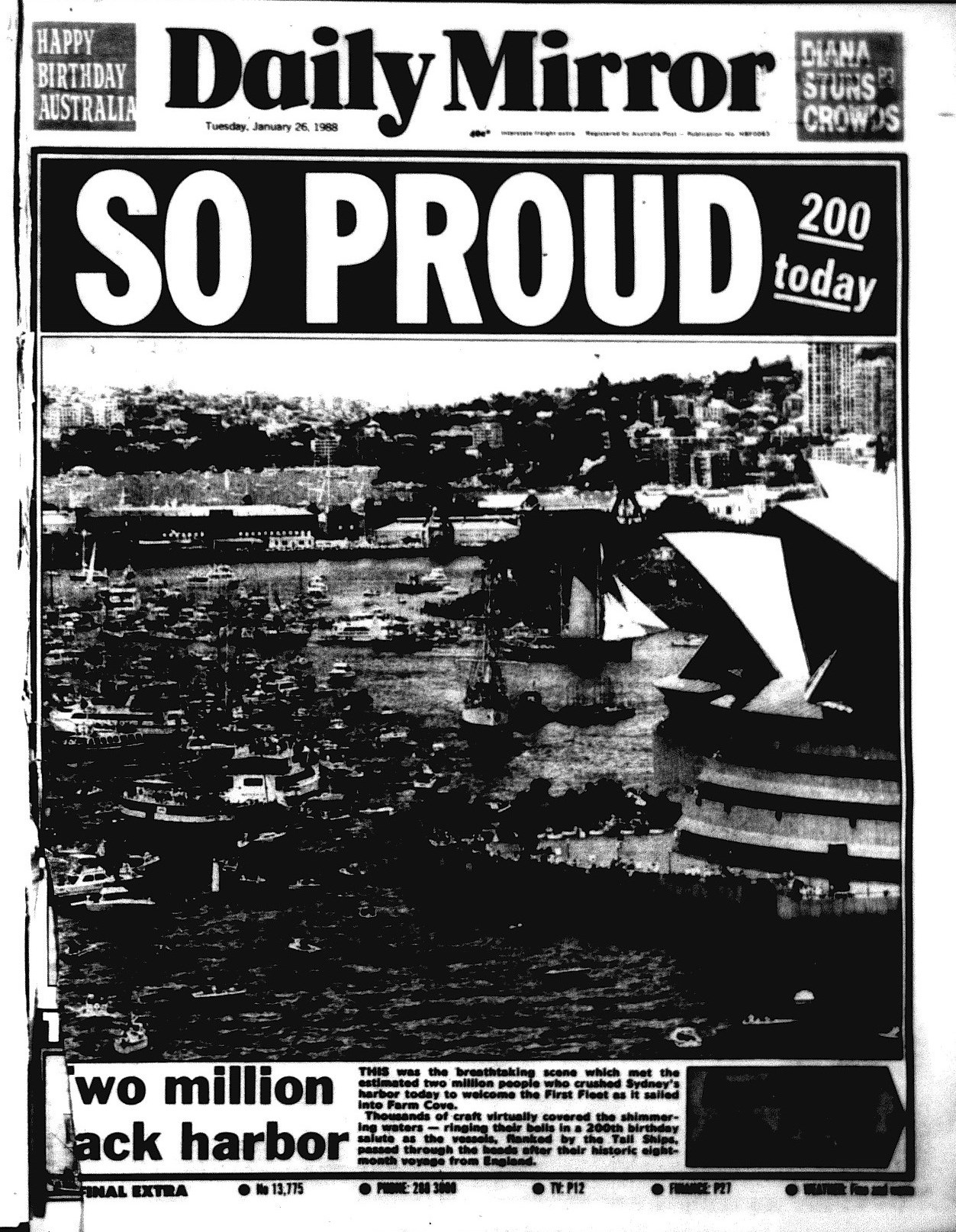 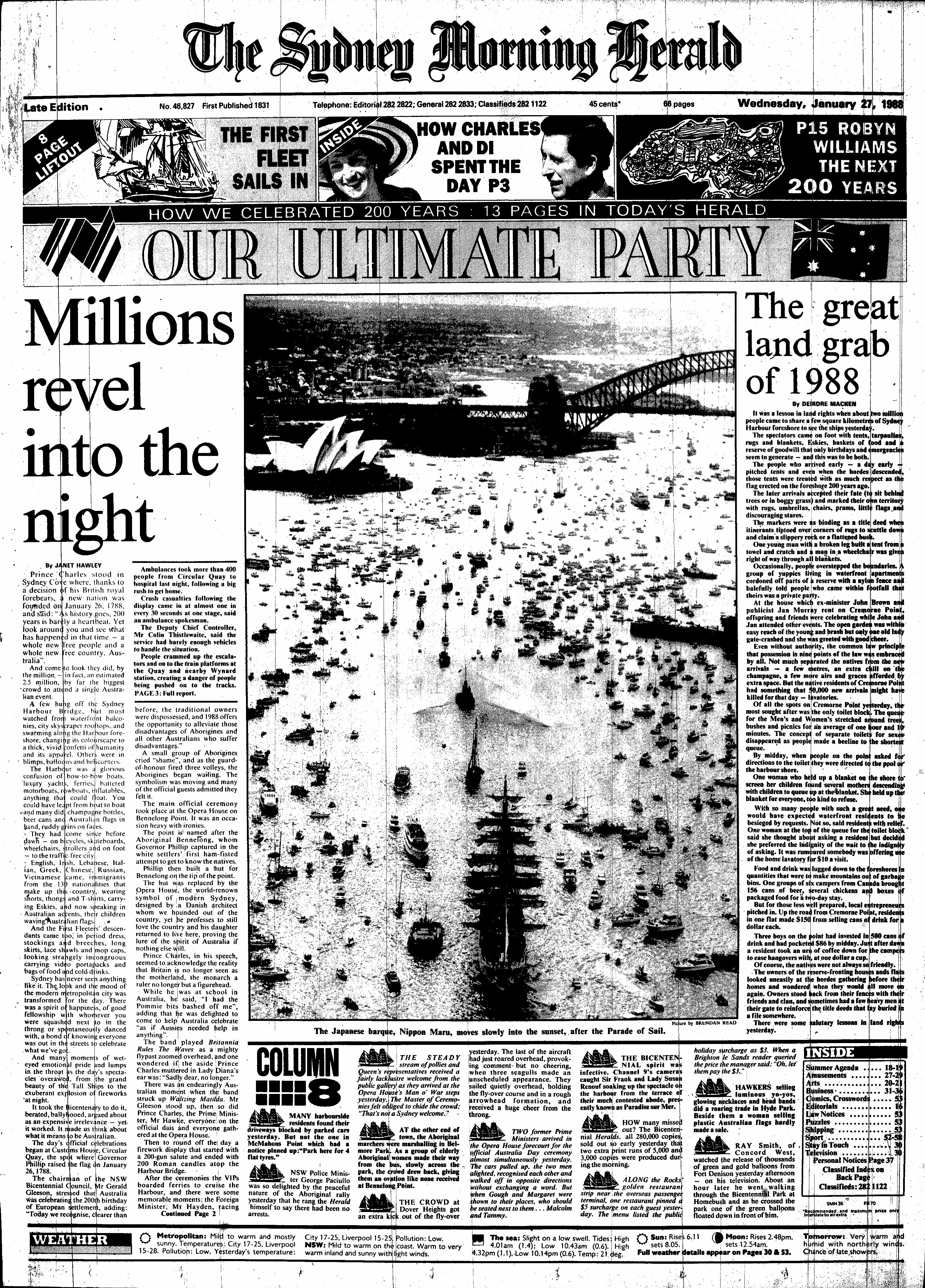 Above: Selected front pages from newspapers dated January 26 and 27, 1988.


The National Australia Day Council (NADC) wants Australian's to use the day what it means to be Australian, celebrate our history and our nation.

For the past few decades, celebrations on Australia Day have grown bigger each year as (most) Australians have valued the importance of the day; even as some call for the day to be moved to respect indigenous peoples who associate January 26, 1788, as the beginning of an invasion of the continent and centuries of suffering.

But what acted as a catalyst for the growth of Australia Day?

As Barrie Humphries points out in Barry Humphries Flashbacks, Australia Day before 1988 involved up "colonial dress ups and low key speeches". There would be flag raising and citizenship ceremonies as part of the day, though more low key than today e.g. Citizenship ceremonies held in the local Town Hall as opposed to the public venue hosting Australia Day celebrations. Australia Day was not a true national holiday, with many parts of the nation opting to mark the day on the Monday closest to January 26.

In 1988, celebrations took the biggest leap forward as the nation marked 200 years of modern settlement. Organisers, inspired by the celebrations in New York Harbour for the Bicentenary of American Independence on July 4, 1976 (and similar events a decade later for the 100th Anniversary of the Statue of Liberty), wanted celebrations on Sydney Harbour to be modeled on that of New York.

Highlights from the day included:

It was reported that as many 2.5 million people attended events on Sydney Harbour that day including those on thousands on spectator boats. The amount of traffic on that harbour that day is unlikely to ever be emulated. British TV Presenter Michael Parkinson pointed out in 1999 that you could walk across the harbour that day as there were so many boats.

Given the amount of material available, I have created a gallery for you to view newspaper clippings related to the day.

I have located the material on Youtube that provides you with the day's highlights and more!!!

This is the only footage of news reports that I have located.

Uploaded by Michael Wayne to Youtube, this was a VHS produced by the ABC with the days highlights.

The Seven Network were involved in the production of this video documenting the reenactment of the First Fleet along with highlights from Australia Day, 1988.

A documentary focusing on how different Australians marked Australia Day, 1988.

For the first time, fireworks were released from the arches of the bridge, setting a precedent for any future fireworks show to be held on Sydney Harbour.

Last year, I shared a preview feature from 1985 of Australia's Wonderland at Eastern Creek as published in The Daily Telegraph.

This week, I share an advertisement from its first season of operation where a day pass was available for just $10.95.  It is equivalent to $27.95 in today's money according to the RBA Inflation Calculator. Good value even though you could only visit on a Saturday or Sunday. 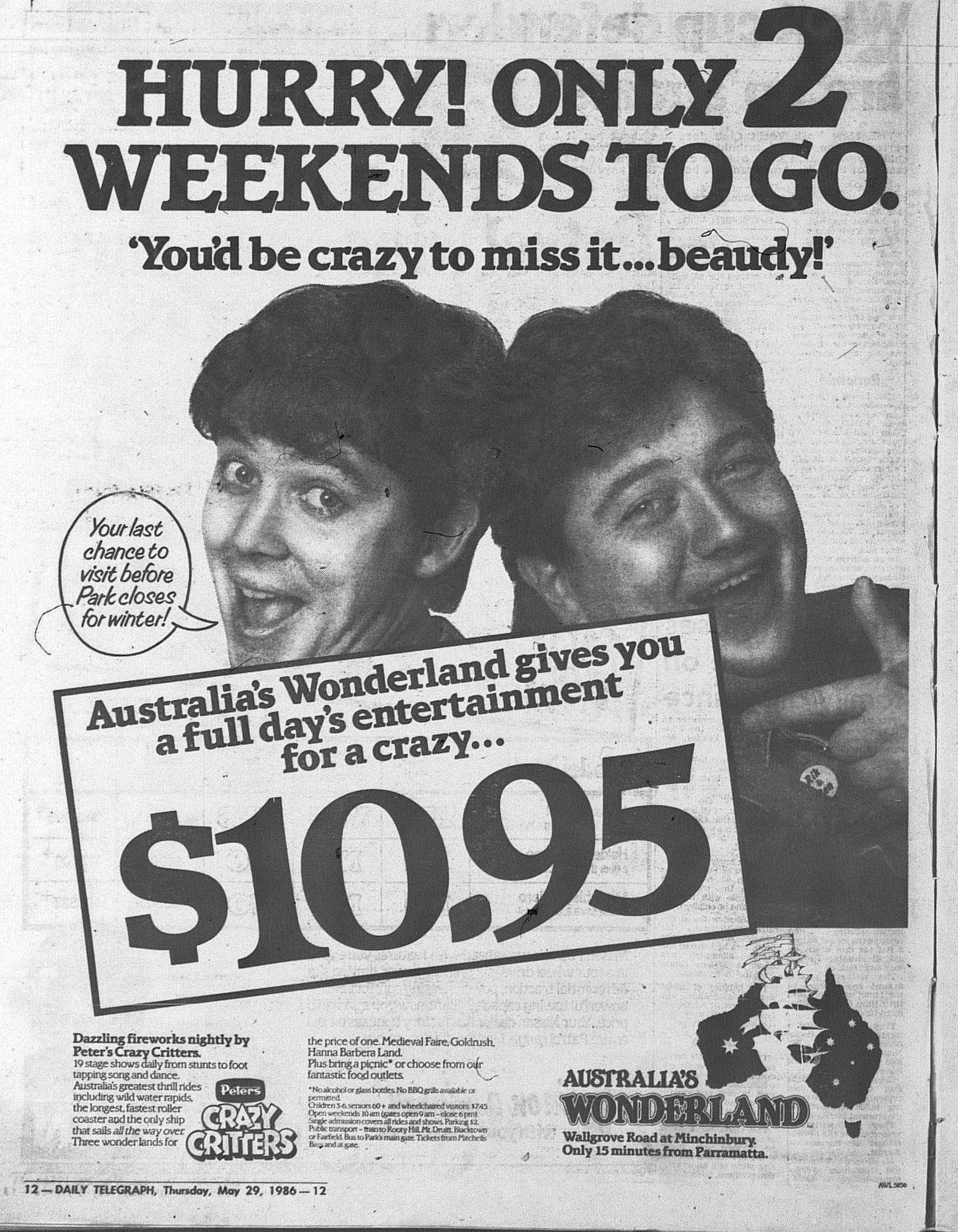 Yesterday, Penrith recorded the highest temperature on the planet - 47.1 degrees while on the coast, it hit 43 degrees, the hottest day recorded in five years.

Meanwhile, many areas of the United States has been subject to an Arctic blast particularly in the north east and mid west.

But how would Sydneysiders cope with a such a cold blast? AGL tried to answer that in 1983 as part of its marketing to attract customers.

As a bonus from that time, here is one of the famous "flame girls" advertisements. They would disappear during the 1990's.

Welcome to our latest Remember This? series which will run weekly through January as I did last year.

In the 1990's, Hahn produced Sydney Bitter - a beer made by Sydneysiders for Sydneysiders. The argument was that other local products e.g. Tooheys were foreign owned, and "plenty" of interstate beers were available. Just a year later, Lion Nathan bought out the company and is now foreign owned. Sydney Bitter has since faded into history. 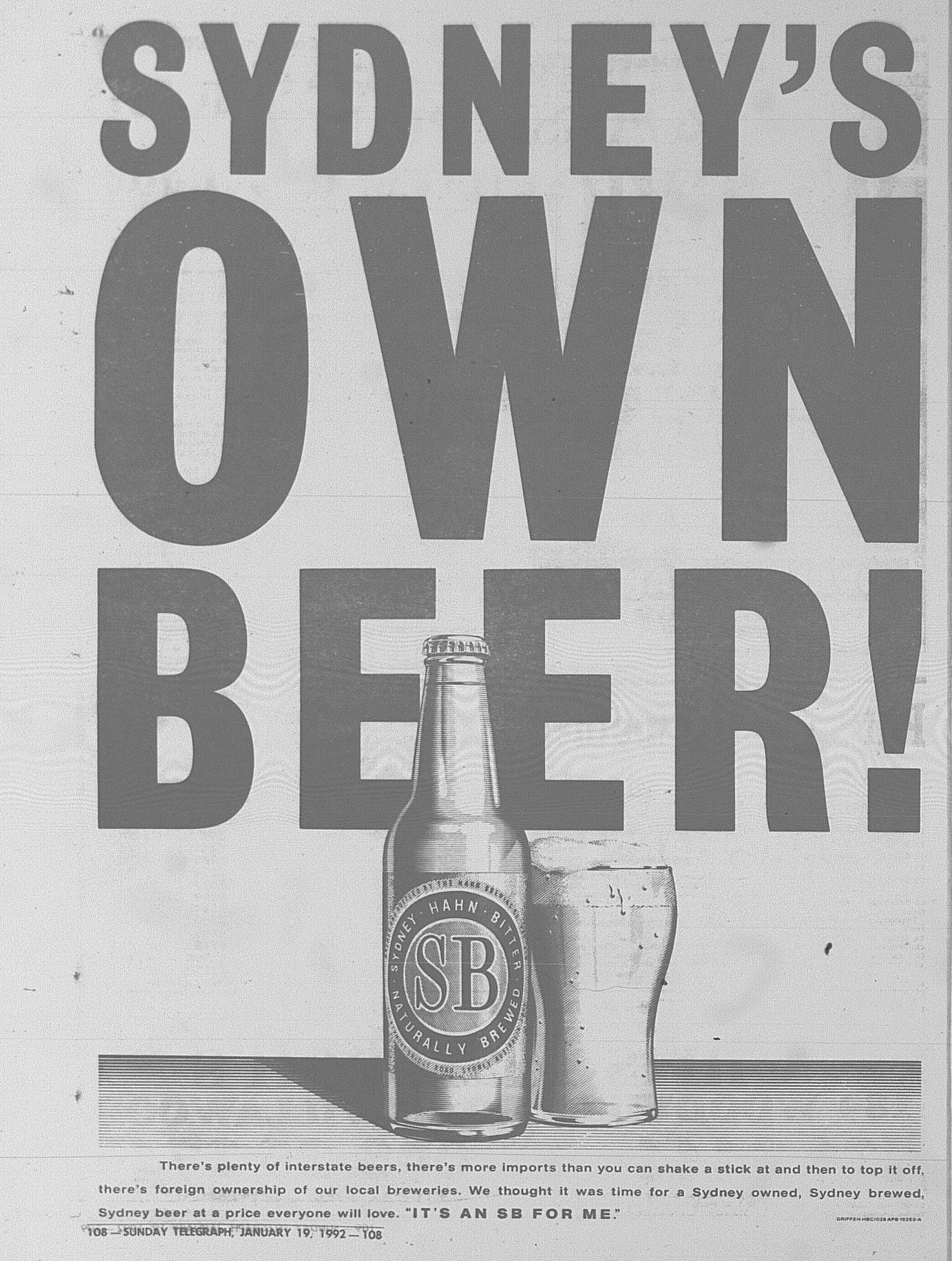