I am continuing in this installment of the Remember This Series to post old commercials that were screened on Sydney television.

This week is an advertisement from Paddy's Market's that was screened on Channel Nine on April 11, 1992.

In 1992, the City markets were located at the former Eveleigh Railyards at Redfern as the Haymarket site was under redevelopment at the time.  They returned to Haymarket at the end of 1993, after spending five years at Redfern.

A key marketing tool at the time was the proximity to rail stations (Flemington and Redfern) to enable people to travel by public transport.

Compared to today market Days at Flemington remain unchanged (Friday and Sunday) but Haymarket has expanded to trade on Wednesday's Thursday's and Fridays.

Today, advertising of Paddy's Markets is usually confined to radio and newspapers.
Posted by Fabian Amuso at 00:00 No comments:

Remember This? is back for the next few weeks but I am going to focus primarily on old advertisements that have screened on Sydney Television.

There have been a number of individuals who have gone through their old VCR's and Betamax videos and have uploaded advertisements from TV shows that they would have recorded. The collections available get bigger.

I have downloaded the videos from Youtube and viewed them for curiosity and have been bought memories back.

This week, I am going to share an advertisement that State Rail screened in 1987 focusing on the Sydney Rail Network. It was known as The Sydney System. Going by the information that I had, this was screened on Channel 7 on March 3, 1987.

You'll notice that the commercial was filmed on the Illawarra and Eastern Suburbs Rail lines e.g. scenes of a train crossing the Como Bridge feature just after the start of the advertisement. I also saw footage from the drivers cab approaching Rockdale Station.

With the Easter Show now underway at Sydney Olympic Park, I recently came across a video on YouTube from Pyrostar International, which contained footage from the very last fireworks spectacular at Moore Park at the 1997 Royal Easter Show.

I do miss the old main arena at Moore Park. The Member's Stand was retained largely as part of the Fox Studios development (minus the seating area).

I have noticed from watching various fireworks shows over the years at Olympic Park that many elements have been retained but technology has allowed for the experience to be enhanced especially the use of lighting effects and that works well with the smoke that is emitted from the exploding shells.

I miss the days when the real estate section when Meriton Apartments used to publish a weekly advertisement in the Real Estate Section (now Domain) of The Sydney Morning Herald and you would be treated to a full list of current projects and an overview of apartments on offer.

I have published a few over the years, but I'll share one from April 5, 1998. Apparently, Sydney was the focus of a worldwide property boom in the eyes of Meriton. 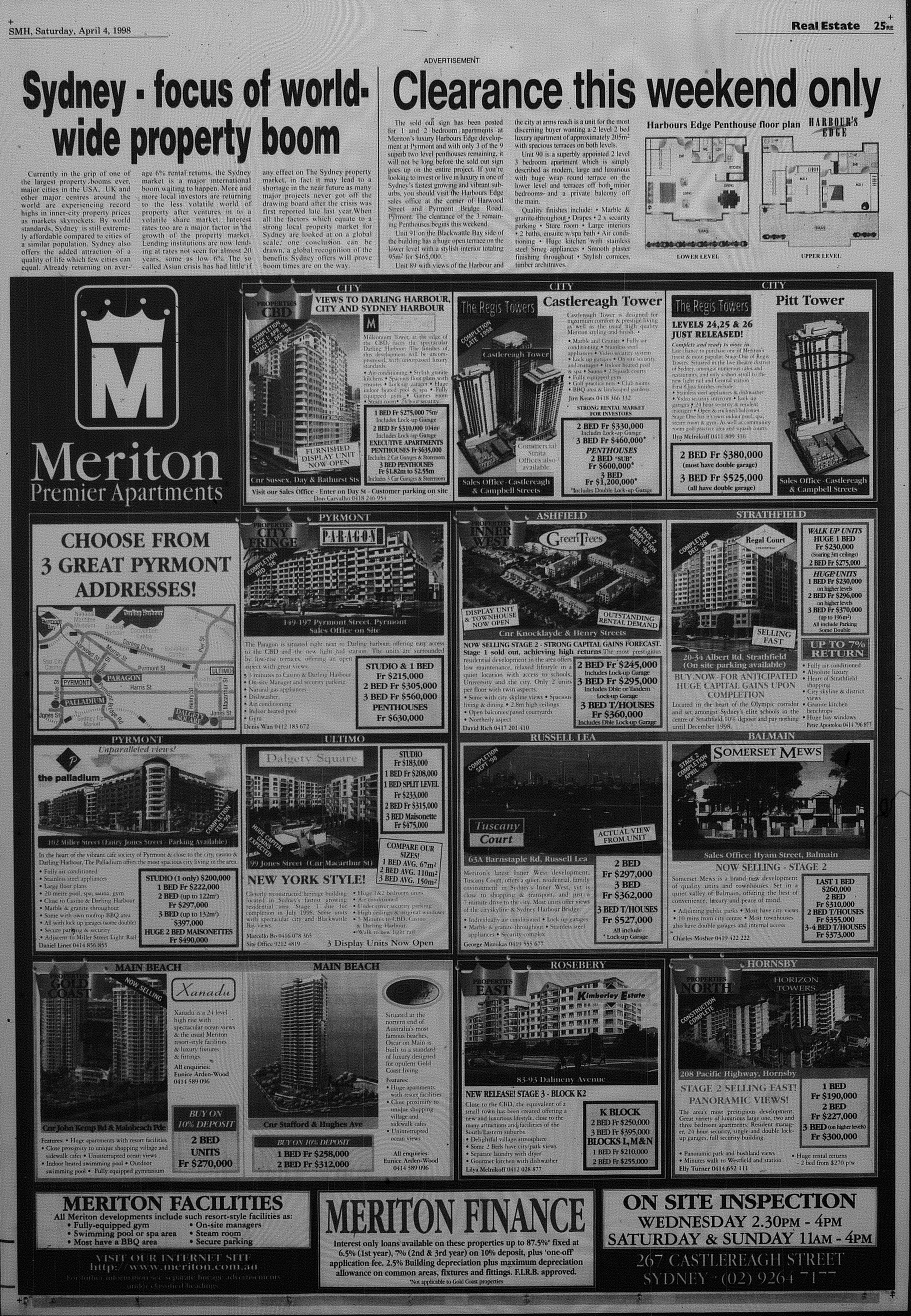 I look at these buildings today, and haven't they aged a fair bit since?
Posted by Fabian Amuso at 00:00 No comments:

One of the best times of the year for Sydney is Easter Show time when the country visits the city. It has become a custom to post a snapshot of a previous Easter show from a generation ago. 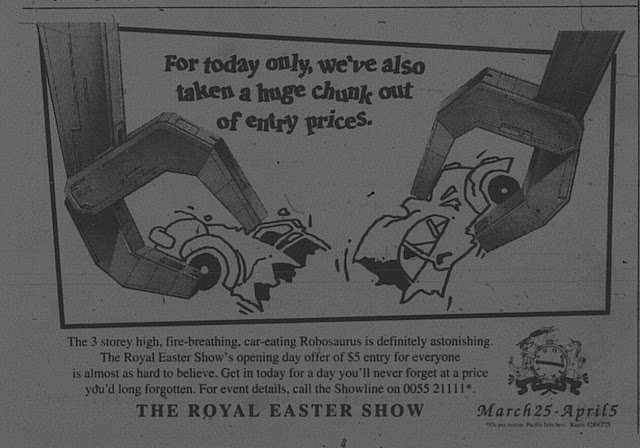 Special evening tickets $5 were available for the first week of the show.

In 2019, it will cost $43 for adults if purchased at the gate, $27 for Children and $33 for concession. However, discounts apply if purchased online or at a Woolworths Supermarket. Public transport is also included. For an adult, assume it will cost around $10-$15 for transport to and from Sydney Olympic Park.

Highlights
Below is a preview feature on Robosaurus. 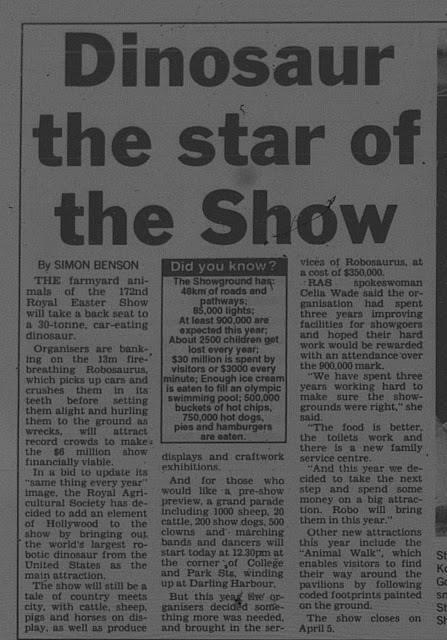 I was fortunate to find a showbag review from The Daily Telegraph Mirror that children from Paddington Public School took part in. Today its the children from the Children's Hospital that perform the road test. In the road test, showbags including Jurassic Park, Mega Dolls, Candyman and the Magic Bag were given the highest ratings. Triple M and Coca Cola were recommended as value for money showbags.

Below is an assortment of Showbag advertisements. This year has seen a huge shift with a significant reduction in advertising space for showbags in the preview guide. Showbag contents will need to be viewed online, whereas until last year, the contents were publically listed in the advertisement.

Note in 1994, you also had each individual showbag and its contents at least printed in print form.

Mega Bags - Many of them continue to be available 25 years later. 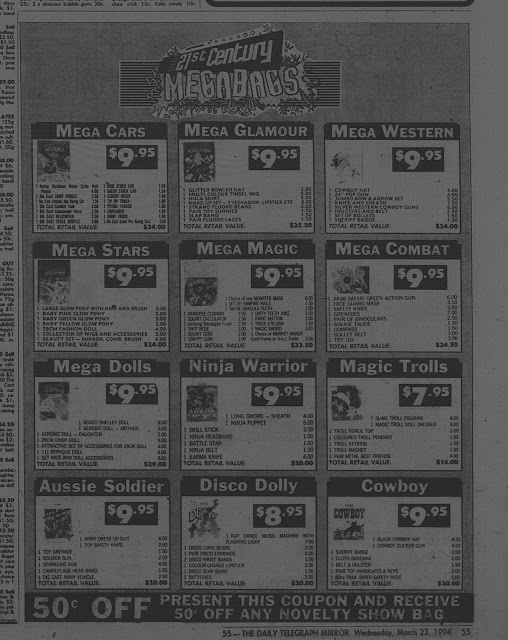 Candy World - I am of the view that the Mars bags etc seemed better back then than now. You get little in their showbags and doesn't seem to change. 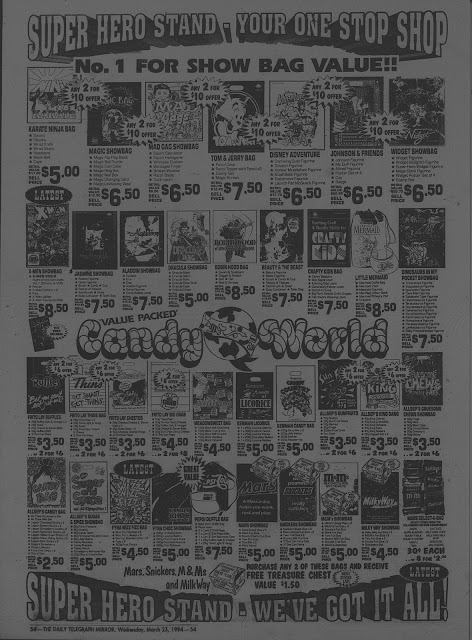 Nestle - Bertie Beetle bags in 2019 will still cost just $2, though there are more pricey bags if you want more of them. Many of the Nestle Favourites have always been part of the bag offering at the show, 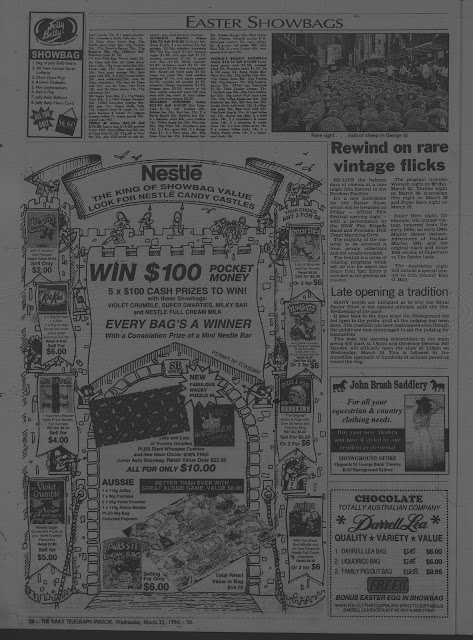 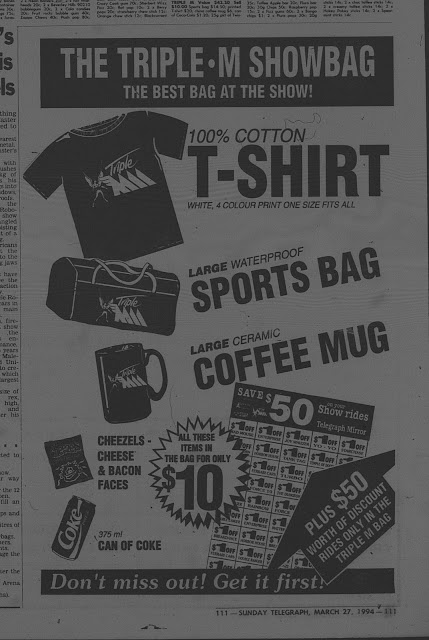 An assortment of bags on offer below. 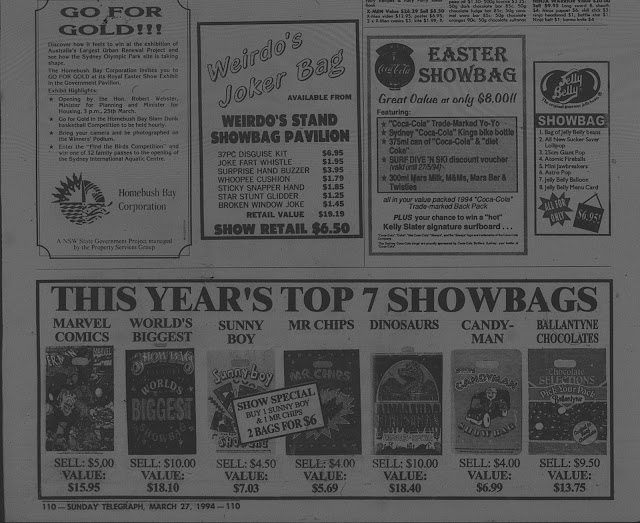 I am assuming that this is from Bensons, which I see as the leader in showbags. On offer including Cadbury bags, Terminator 2, Beverly Hills 90210 and Jurassic Park. 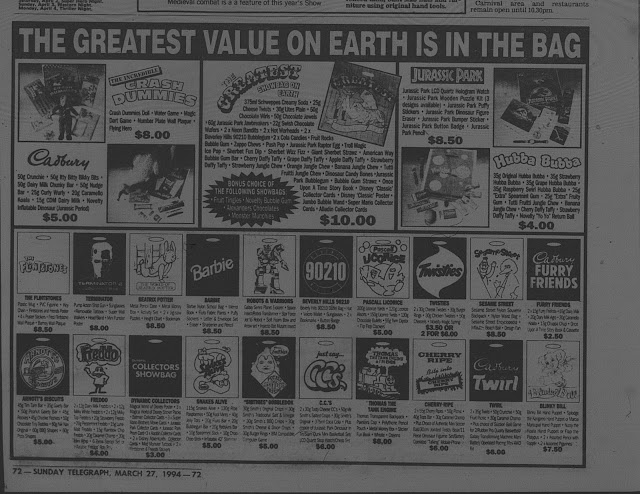 Gag Magic -  Another popular seller at the show of the years. 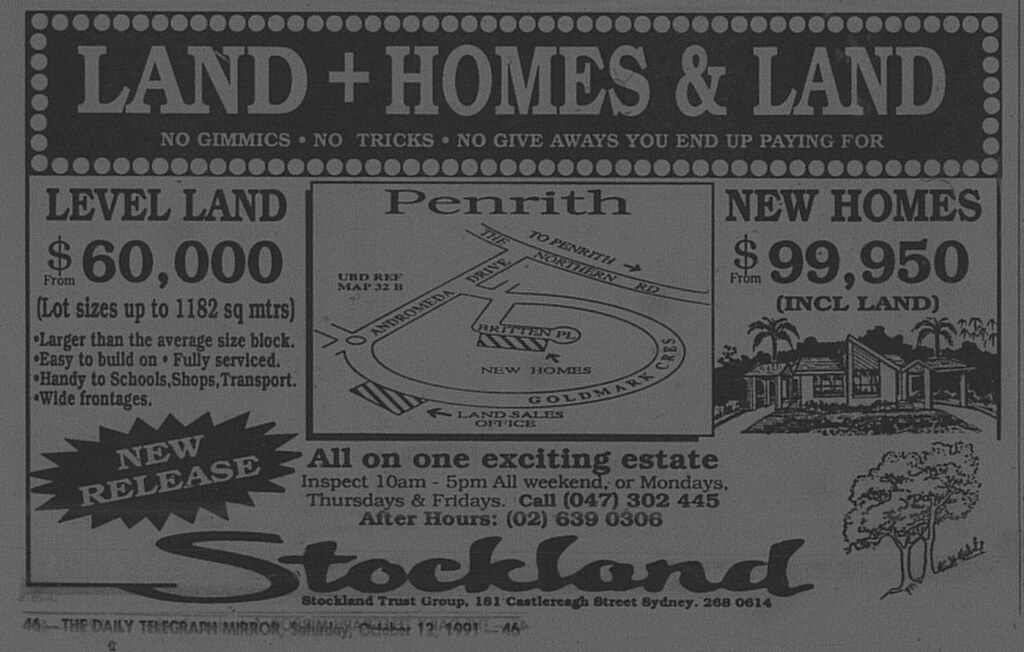 1990: Feature on development in Parramatta

In 1990, The Sunday Telegraph published a feature on the boom in construction in Parramatta and its emergence as a business centre. It made reference to the "Dallas Style" skyscrapers that had popped up (towers with glass facades) during the 1980's. The focus on development was on commercial buildings and international hotels.

This boom does pale in comparison with the development of the past decade, but approach this article from an evolutionary viewpoint. The boom of the 1990's was one leap in moving Parramatta forward in the years to come. The buildings that were "tall" in the 1990's are now longer "tall" with the new towers up to twice the height either built or proposed.