1994: When Tony Abbott was elected as MP for Warringah & Bronwyn Bishop won MacKellar

At the Federal election over a week ago, Tony Abbott's political career came to an end when he lost the seat to Independent Candidate Zali Stegall.

According to the results from the Australian Electoral Commission, Abbott lost a third of his vote from the 2016 Federal Election with a 20% swing to Stegall.

While people will be talking about his loss for a long time, why not look back at when he won election as the MP for Warringah back in 1994.

Why was the by-election called?

The member for Warringah - Michael MacKellar announced on January 21, 1994, that he would resign from Federal Parliament to accept a role at Plastics, Chemicals and Allied Industries Association of Australia.

MacKellar had served the electorate for 24 years.

Selecting the Liberal candidate for Warringah

It was rumoured that Senator Bronwyn Bishop would run as she was building a support base within the electorate. She ended up contesting MacKellar.

Abbott won preselection for the seat of Warringah on February 20, 1994, for the Liberal Party,  defeating Peter King (later became MP for Wentworth from 2001-2004),

The by-elections in Warringah and MacKellar was held on March 26, 1994. The Labor party did not field a candidate in either seat.

Abbott won Warringah with 55 % of first preferences and a two-party preferred vote of 59 %. He pledged his loyalty to Liberal Party leader John Hewson. Before contesting the seat, Abbott was a staffer to Hewson and head of Australians for a Constitutional Monarchy.

Bishop had a tougher battle, winning on preferences. She would remain as the member for MacKellar until 2016 when she lost preselection to Jason Falinski as the Liberal Candidate for the 2016 Federal Election. This came after she resigned as speaker in the Abbott after charging taxpayers $5 500 for a 2015 helicopter charter flight from Geelong to Melbourne.

Below is full coverage of the by-election results from the March 27, 1994 edition of The Sunday Telegraph. 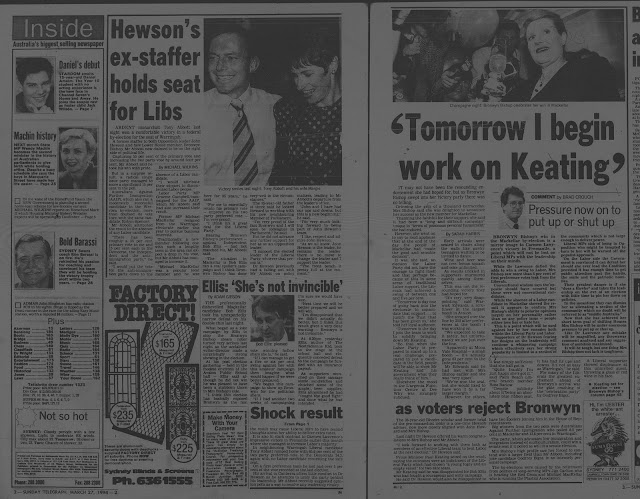 Below is an advertisement from 1970 for Sterling Homes. They had display homes on exhibition in Latona Street, Winston Hills. 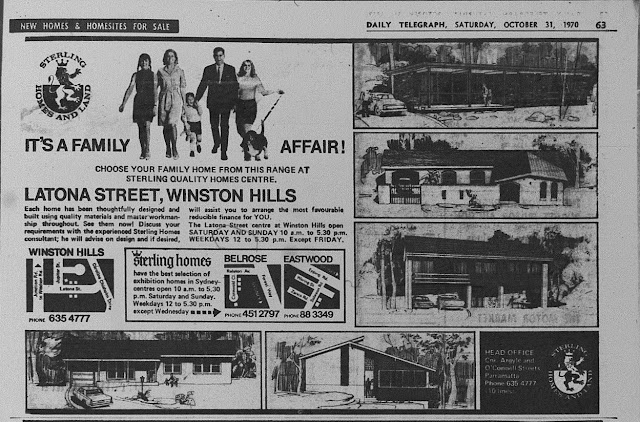 I found an article for a proposed apartment tower from an edition of The Daily Telegraph dating from 1973 for what is now the site of 60 Margaret Street, which was never built. 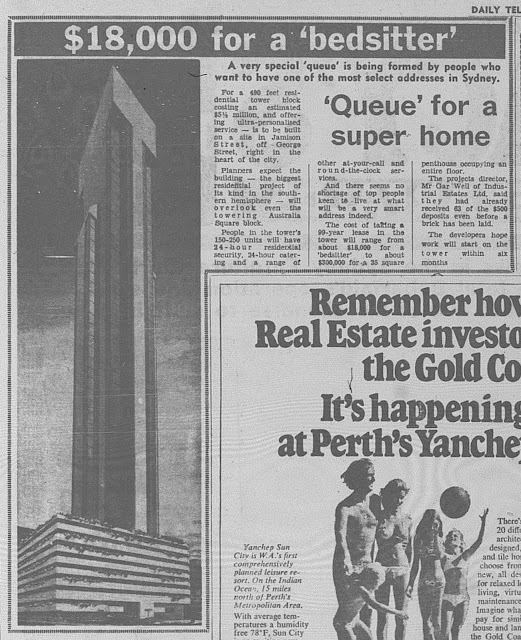 A special thank you to Richard Braddish of Sydney City Council for supplying additional information.

Below is an advertisement from 1968 promoting blocks of land at the Elouera Park estate at Westleigh. The blocks were sewered. Stewart Upton Pty. Ltd. were the agents. 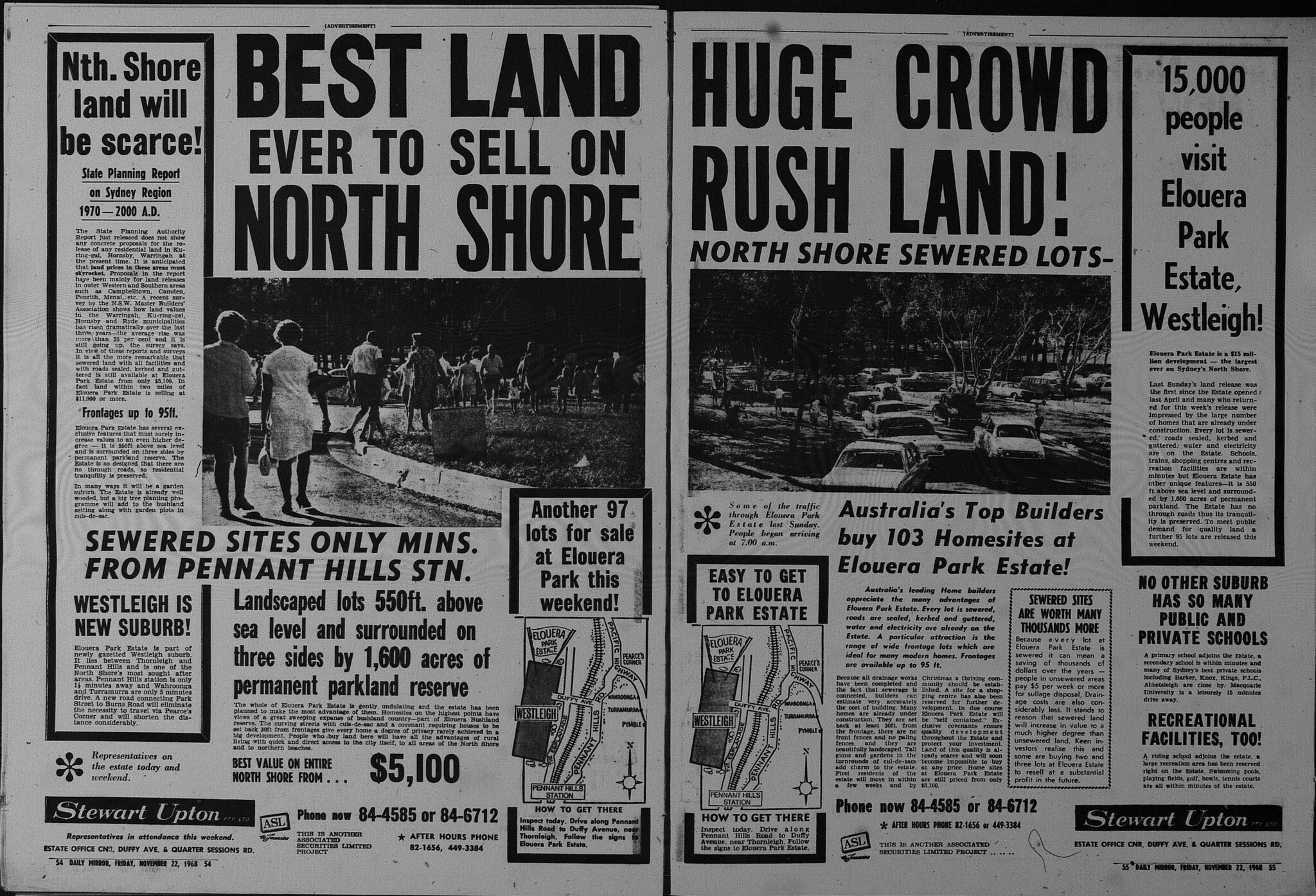 For around 30 years, Sydney bus commuters had access to multi-trip tickets for bus travel. For the majority of this period, they were available only for use on public bus services. They were expanded to private bus services in 2010 and rebranded as "MyZone".

Between 1992 and 2010, multi-trip bus tickets were known as TravelTen which allowed a commuter to prepurchase 10 rides for travel on public buses. Use of the tickets provided discounted travel for the commuter. 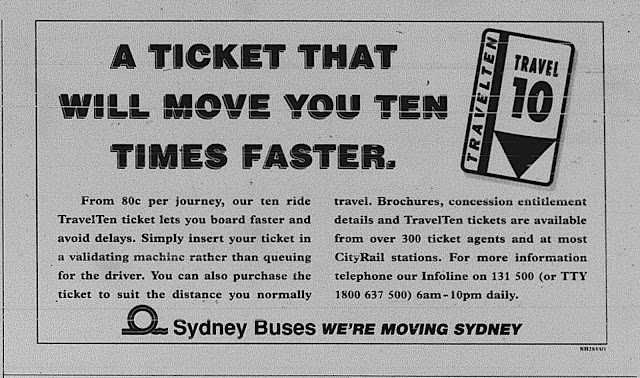 Source: Sydney Buses. 1996. "A ticket that will move you ten times faster" (Advertisement). The Daily Telegraph, February 22: page unknown.
Posted by Fabian Amuso at 00:00 No comments:

Below is an AR Homes Advertisement dating from 1966.

From 1983 to 2018,  John Cootes Furniture was a big player amongst Sydney furniture stores. Below is an advertisement from 1987 that was uploaded to Youtube by "Robert Pugsley".


I used to have a Betamax video with an advertisement from early 1984 and have seen one on Youtube from a complication of Sydney advertisements recorded in 1986 and it is interesting to follow the evolution of his commercials during the 35 years of trading. Compare this one to even ones you may remember in the 1990s.

Older advertisements tended to be filmed in a studio. 1990's commercials tended to have Cootes on the shop floor himself, with background music. I think the inclusion of Cootes in the advertisements was essential to any marketing for the store. It is the same as having Gerry Harvey personally feature in advertisements for Harvey Norman - whether it is radio or television. I remember seeing the commercials in its final year of trading and they were tacky. Just not the same

The Cootes family sold the business in June 2014 to Elanor Investments Group. They embarked on an expansion campaign across Sydney, regional NSW, and Canberra but became a victim of competition from retailers and online shopping.

Below is an advertisement for "The Tor" at Kings Cross dating from 1965. 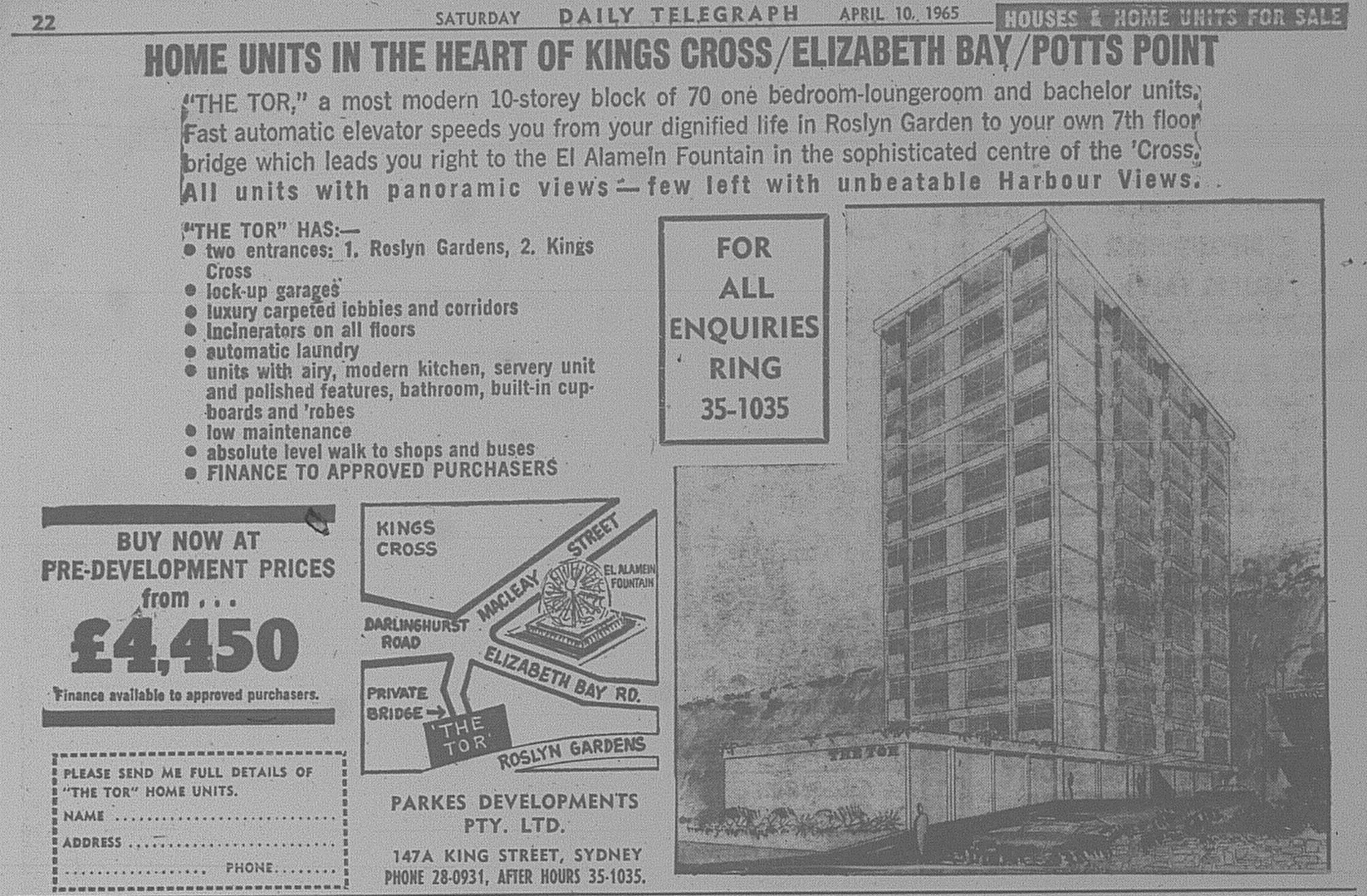