As you may have noticed, I have taken a break from posting as I was recently on holidays in Melbourne during the school holiday break and didn't prepare any postings for the past week

In this past week, heights of city buildings have been discussed as The Daily Telegraph published visions of what Sydney's Central Business District and regional centres could appear in as little as two decades from now.

It envisions that Sydney will need to build towers double the height of the existing tallest buildings in the city to accommodate for future population growth and demand for commercial space.

This will be a huge subject of discussion because building significantly taller buildings would actually preserve existing low density neighbourhoods, as development would become more concentrated in fewer parts of the city. Restricting height limits could create more dilemmas and this would meaning zoning more low rise areas for high rise.

If we went back more than thirty years, the NSW Government wanted to restrict Sydney building height limits in 1987. Barrie Unsworth was premier and Bob Carr was the environment and planning minister. He was concerned that developers wanted buildings in excess of what was permitted but at the same time was also concerned about overshadowing of public parks and civic spaces.

One development that concerned him was Alan Bond's proposed Skytower at 2 Park street which I covered last year.

Below is an article from The Daily Mirror as published in November 1987. 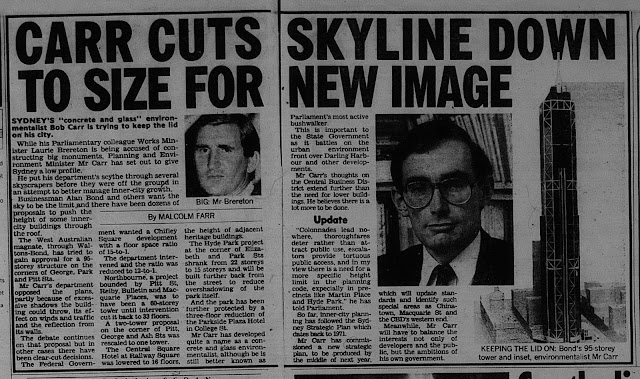 Building height limits were based on the Sydney Strategic Plan of 1971, which was not as rigid as current policies are today.

In early 1995, building height limits for central Sydney were set to prevent overshadowing over public spaces and parks at a maximum of 235 metres. I have in a previous entry posted the article. Bob Carr did not impose the limit as at the time, as he was NSW Opposition Leader. He would be elected weeks after the plans were released. His idea certainly proved feasible at the time.
Posted by Fabian Amuso at 00:00 No comments:

It is not often that I post an advertisement for one private dwelling. This one was for a four bedroom home at Gymea Bay in 1989 as published in The St George and Sutherland Shire Leader. 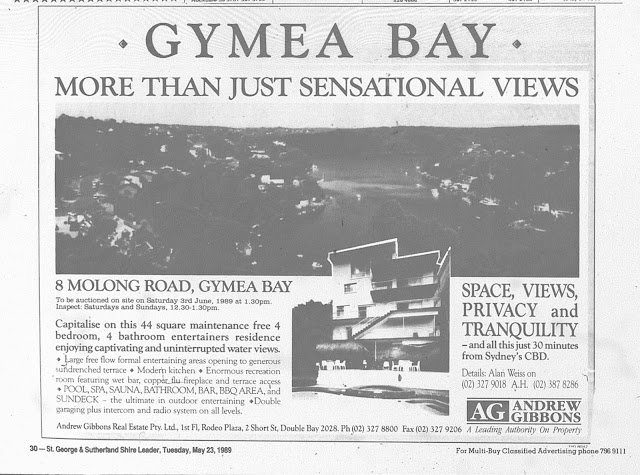 The house was still there as of May 2014 according to Google Streetview. As for 2019, it is unknown.
Posted by Fabian Amuso at 00:00 No comments:

Back in 2014, I presented an entry to mark the 35th anniversary of the opening of the Eastern Suburbs Railway Line in 1979.

It recently turned 40. I look back at the original entry and recognised that there was some clippings that didn't appear in the original post that I had on file.

A good way to mark its 40th birthday.

The article below was from The Sun (June 25, 1979) and reported on teething problems as the line underwent its first peak hour test. The biggest hurdle was bus connections and changes to bus routes, which resulted in missed trains for some. 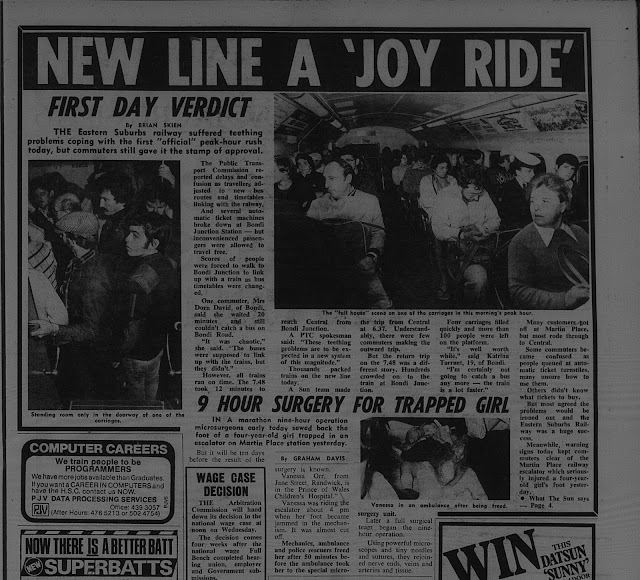 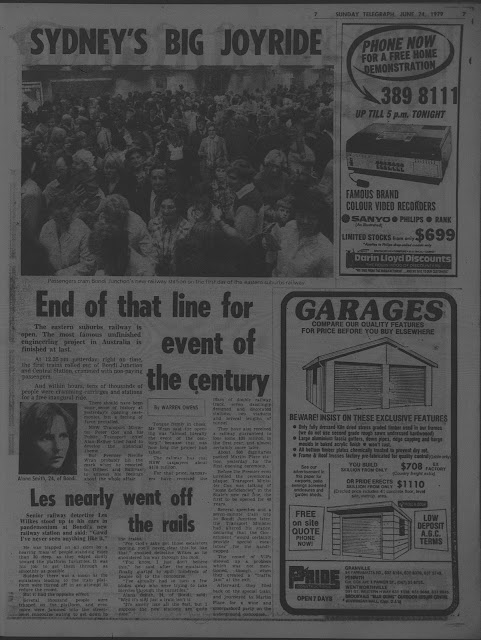 The Sun Herald (June 24, 1979) focused on the proceedings at the official opening ceremony and carried an excellent picture of Premier Neville Wran cutting the ribbon. 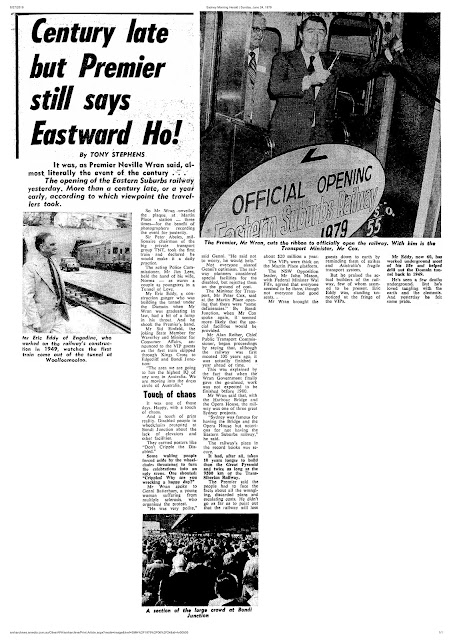 The Sydney Morning Herald (June 25) reported that at least 250 000 had traveled on trains on its opening weekend. Overcrowding on board trains and platforms was constant and even delays. Not even adding extra carriages was enough!!!

1990: The end of floor trading at the Sydney Stock Exchange

September 28, 1990 marked the end of an era in the trading of shares on the Australian Stock Market. Once upon a time shares were bought and sold on the trading floor of the stock exchange.

On October 1, 1990, stock brokers were sent back to their offices and could only trade shares electronically.

This, combined with advances in internet and telecommunications technology allows one to trade shares from anywhere.

I also obtained an article as published in The Daily Mirror on that day (September 28) which ties in the final day of floor trading with the regular market session. 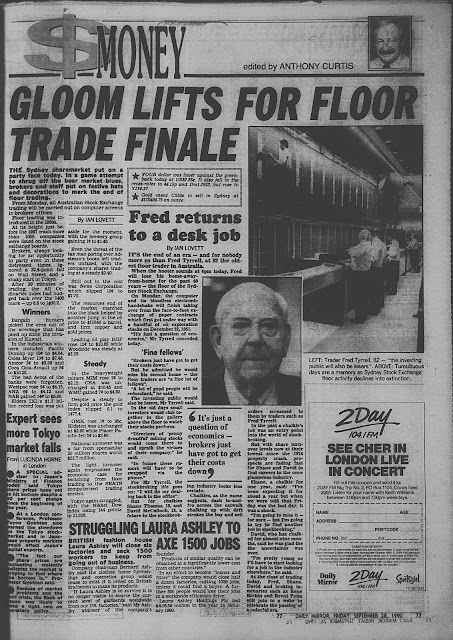 Below is an advertisement from United Properties from 1960.  You could have a three bedroom brick veneer home built for around $7000 (3485 pounds) on your block of land. 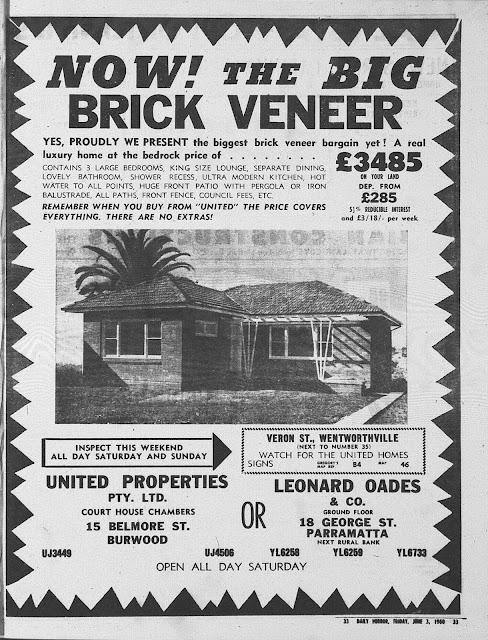 1987: Roselands gazetted as a suburb

Below is an article from The St George and Sutherland Shire Leader relating to the gazetting of Roselands as a suburb. No residents objected to the naming and were in support of the idea. 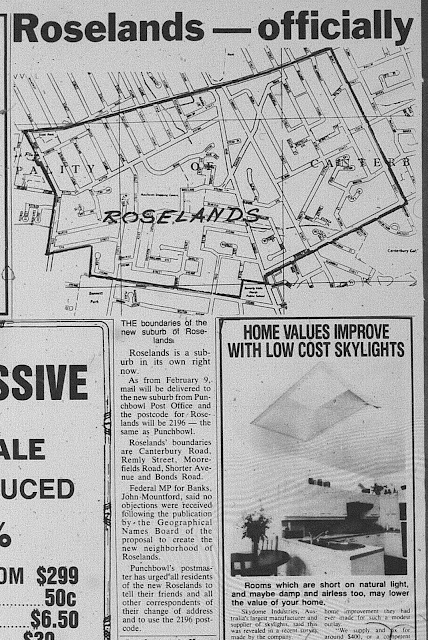