Below is a 1969 newspaper advertisement by Stocks and Holdings promoting a land release at Kingswood. All homesites were sewered. 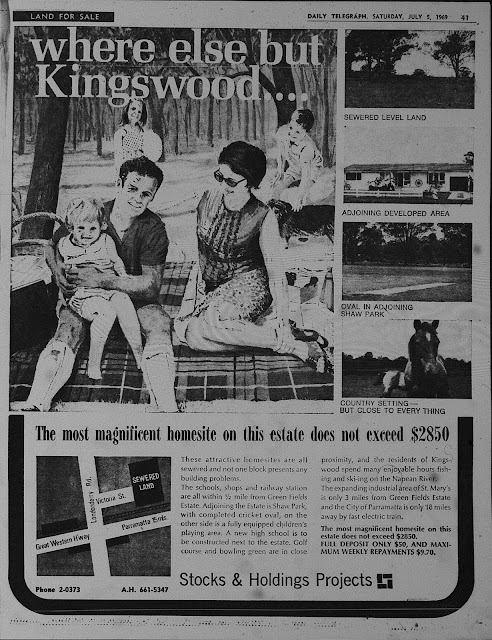 Source: Stocks & Holdings Projects. 1969. "where else but Kingswood" (Advertisement). The Daily Telegraph, July 5: 41.

This year is forty years since Syd Enfield Drive was completed. Originally the road was known as the Bondi Junction Bypass. The section of road was part of a vision to form the (never built) Eastern Suburbs freeway that would connect Bondi Junction to the city.

It would also form part of the commercial redevelopment of the suburb along with the construction of the Eastern Suburbs railway line, and would eliminate through traffic through the centre of Bondi Junction.

Construction took less than two years before being opened to traffic on 9 January, 1979. The road was opened by local State MP and Minister for Consumer Affairs - Syd Enfield.

In 1988, the bypass was named Syd Enfield Drive in honour of the former MP.

With traffic now bypassing the commercial heart of Bondi Junction, it led to creation of the Oxford Street mall.

This week, I remain in Surry Hills and will share a 1999 advertisement for the Carlisle development in Campbell Street. 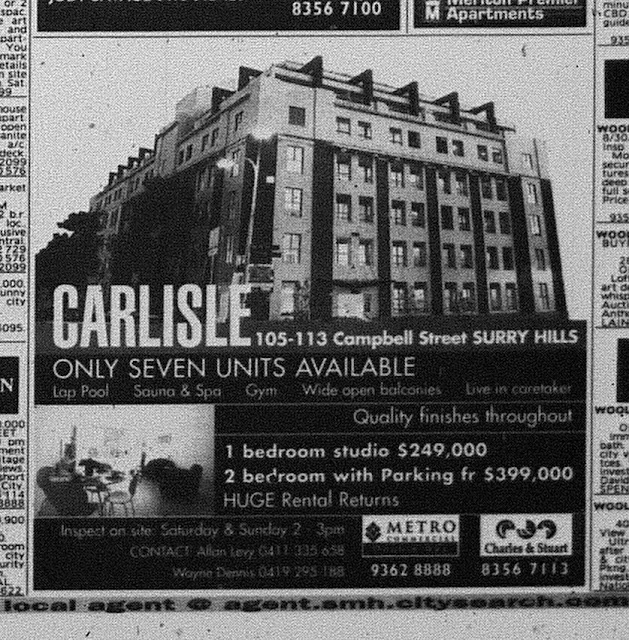 The Daily Telegraph published a feature article in 1972.  Evan Whitton wrote an article about the failure of planning authorities to adhere to the 1948 Cumberland Plan.

1972 was nearly 25 years since the Cumberland Plan had come into existence, with a focus on creating a green belt on what was then the outer boundaries of Sydney which would separate the city from the outer regions including Campbelltown and Penrith.

There would be wedges of open space among st the suburbs of Sydney.

Under the plan, the population of Sydney was to be contained at 3 million people. During the 1970's Sydney's population reached 3 million. 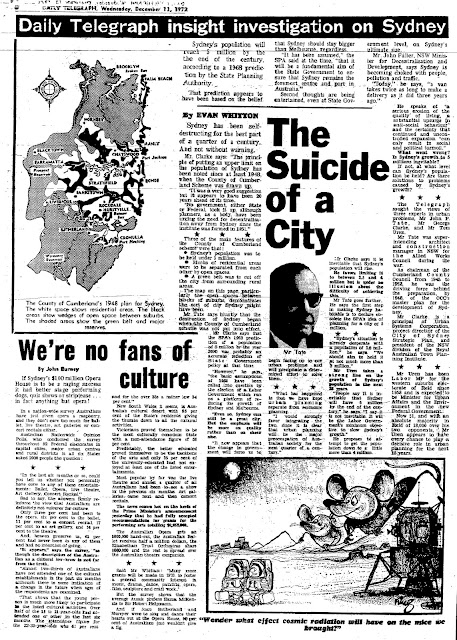 Below is a 1997 newspaper advertisement for apartments in the Sydney Mansion Complex in Goulburn Street, Surry Hills. 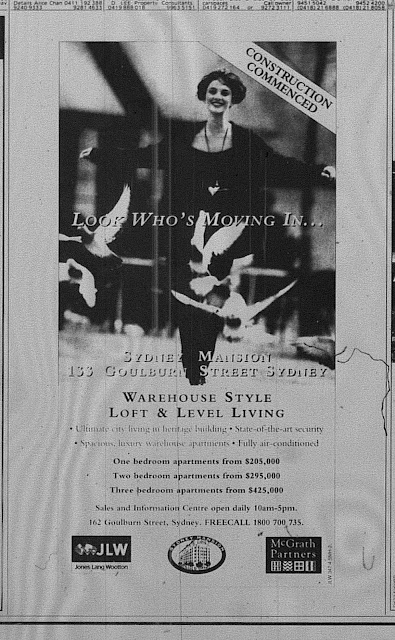 Remember this? - Sydney Newspaper coverage of the moon landing (1969)

As a teacher librarian, I have created a display to mark fifty years since the Apollo 11 mission to the moon.

Apart from promoting books relating to space travel and astronomy, I have been sharing newspaper front pages from the mission to show students how Sydney's newspapers covered each day of the mission.

This week, I am going to share some newspaper front pages from this occasion which I have shared with the students.

Below are the front pages of the evening newspapers - The Daily Mirror and The Sun from July 21 1969. 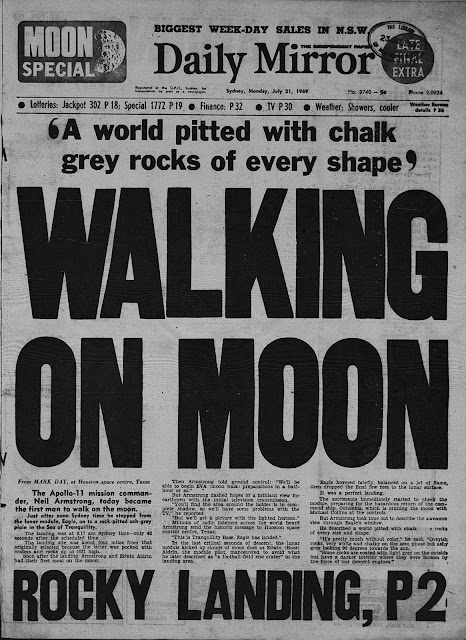 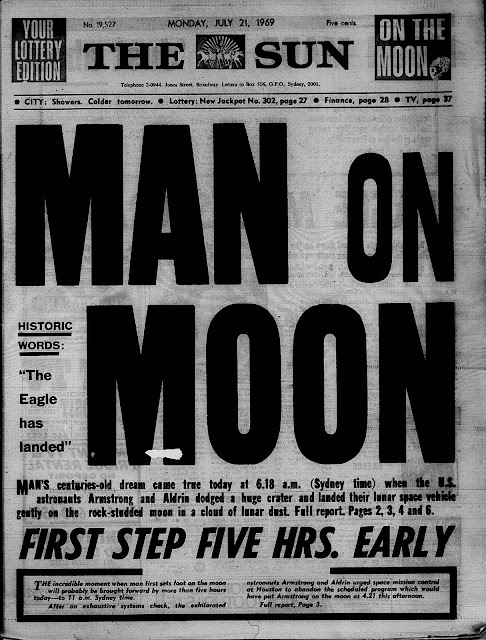 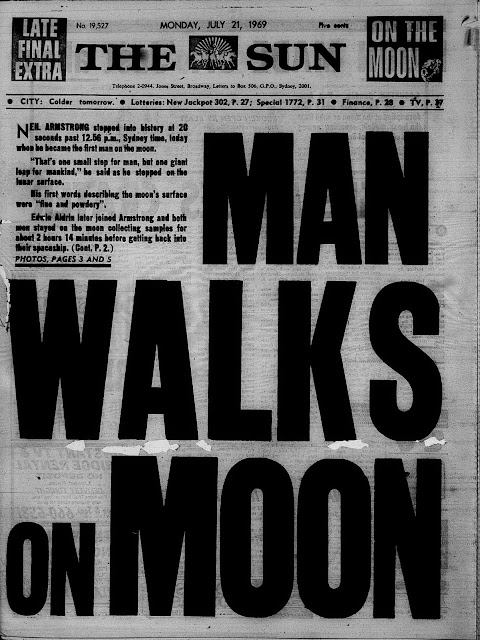 Below are the front pages of the morning newspapers - The Australian, The Daily Telegraph and The Sydney Morning Herald from July 22 1969. 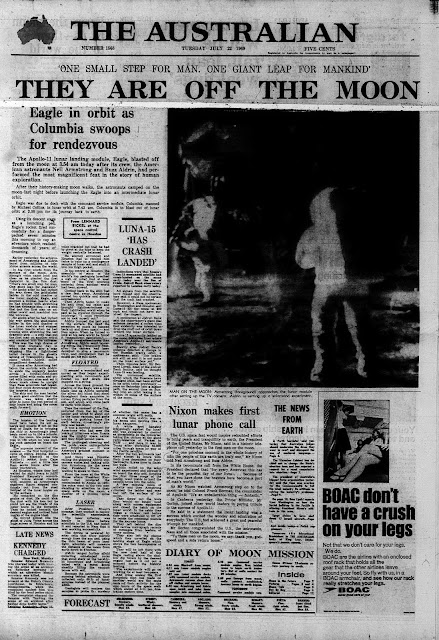 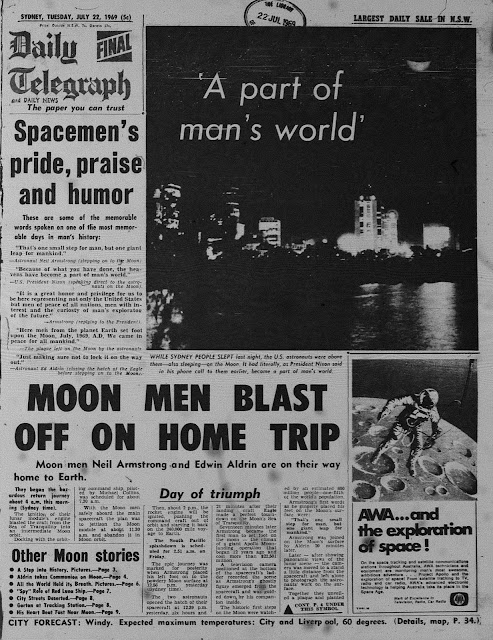 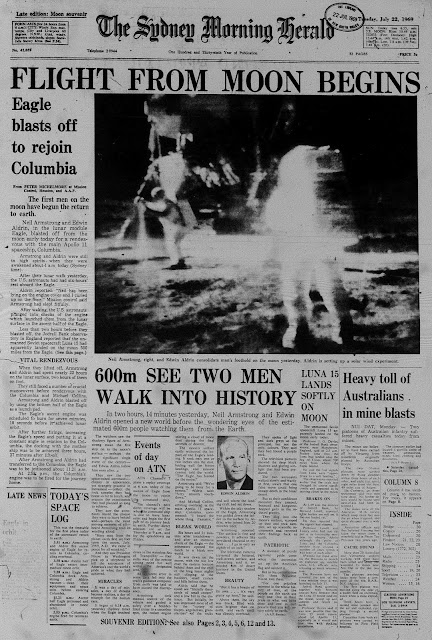 Update on proposed Westfield Miranda Series: I will have to defer this a little longer, but hopefully before the year is out. The material is great but have been short on time to collate it.
Posted by Fabian Amuso at 00:00 No comments:

Bridgeport is the first and only residential building currently located in Bridge Street. In 1997, apartments were on sale. Good address if your office is nearby or want to enjoy the harbour or nearby Botanic Gardens. 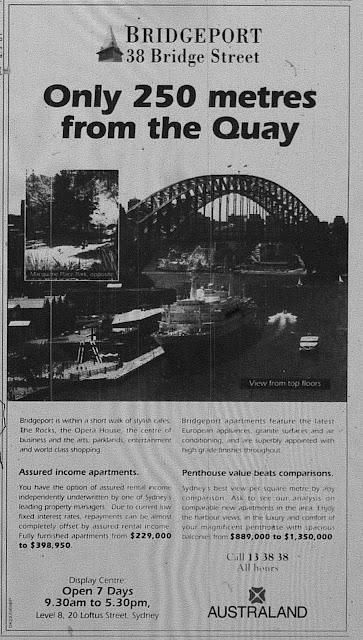 1998: An Alternative scheme for the Deutsche Bank Place

Deutsche Bank Place in Phillip Street was completed in 2005. The 240 metre tower (to spire) was designed by Norman Foster. One of its main features is the sloped exoskeleton atop the building to comply with the sun access plane that encompasses the site.

Did you know that an early scheme called for the exoskeleton to be curved instead of sloping diagonally?

When I look at it, it does appear like the sail on a yacht but also makes me think of the Opera House sails. Also there is no spire with the design.

The design attracted much controversy but since completion has received nothing but acclaim, plus it has been a very welcome addition to the Sydney skyline.

For commercial firms, the 43 000 sq/m of space over 31 floors has been highly sought after especially for its facilities and views. 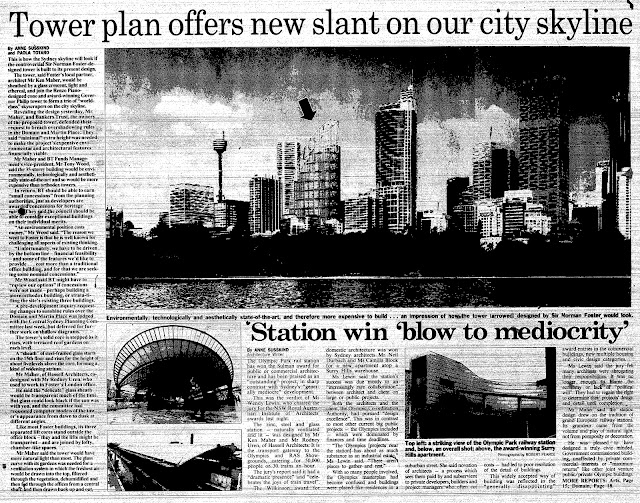 Below is an advertisement for The Tower apartments (located above Myer Sydney) dating from 1997. This was part of the redevelopment of the Farmers/Grace Bros site in George Street.

It certainly has to be one the best locations in town to reside in, with the Pitt Street mall directly below and easy access to the rest of central Sydney.
Posted by Fabian Amuso at 00:00 No comments: