In 1961, Gerry Harvey and his business partner Ian Norman opened an electrical and on the Princes Highway at Arncliffe that would evolve into the now defunct Norman Ross Discounts.

Through Norman Ross, Harvey connected with the Arncliffe Store until he was sacked in 1982 following its takeover from Bond-Waltons.

His sacking led to him starting a new chain of electrical and furniture stores - Harvey Norman and evolved to become one of the biggest retailers in Australia.

In 1992, Norman Ross collapsed. For Harvey it presented an opportunity to acquire some of the former Norman Ross stores and convert them into Harvey Norman stores including Arncliffe.

For Harvey, it meant that the site that began his career in retailing was back in his hands and could reconnect with the people of the St George region that he had served for decades. It was also where he would experiment with extended trading hours on Saturdays and Sundays. He identified loopholes in legislation and risked prosecution for breaching trading laws.  would set a precedent for the trading hours that shape shopping in 21st Century Sydney.

Harvey Norman would trade at Arncliffe for several years before it was closed (along with their Westfield Miranda store) when a new store at Caringbah opened.

Below is an advertisement for Harvey Norman at Arncliffe as published in the March 26, 1992 edition of The St George and Sutherland Leader. 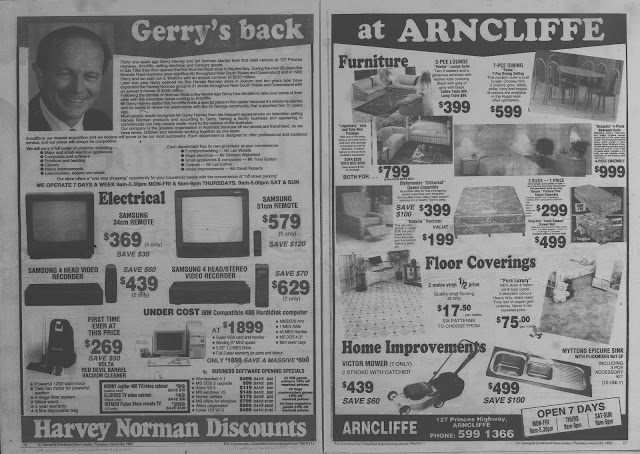