Let's head back a generation to see how the people of Sydney marked the start of 1991. 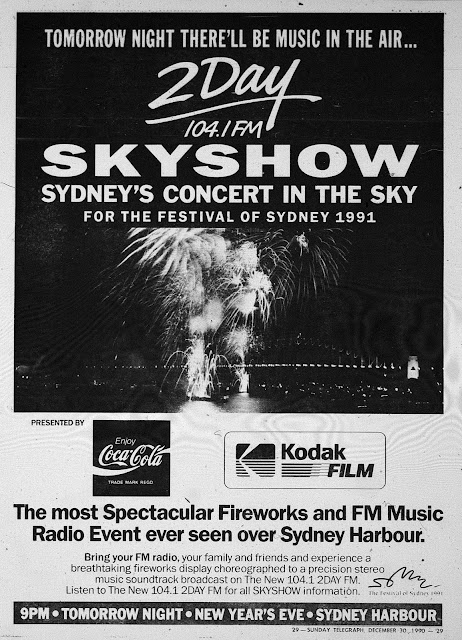 Unlike 2015, where the celebrations take place at midnight with activities to count down the final hours, celebrations were a mid-evening affair.

Just like the year before, the thirty-minute fireworks skyshow held at 9pm marked the start of the 1991 Festival of Sydney. This was the second annual show and would be a forerunner to the displays that we see today. The Daily Telegraph Mirror prepared a wall chart ahead of the event. 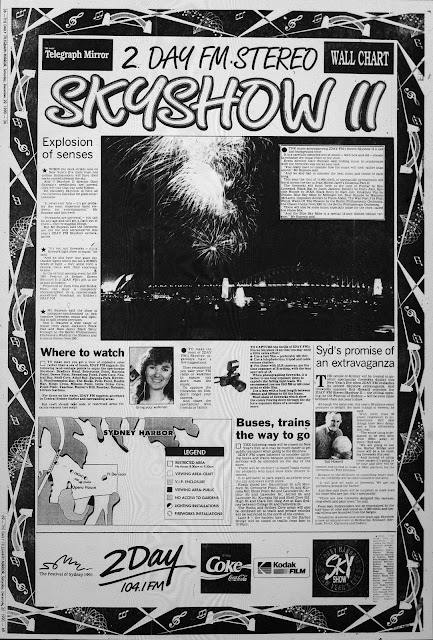 Fireworks were to be launched from four barges off Bennelong Point which was spread over 100 metres. Even though they were tightly condensed, you were able to see it from anywhere in the harbour. No fireworks were to be let off the Sydney Harbour Bridge. I've enlarged the map provided on the preview poster above to give you the idea. 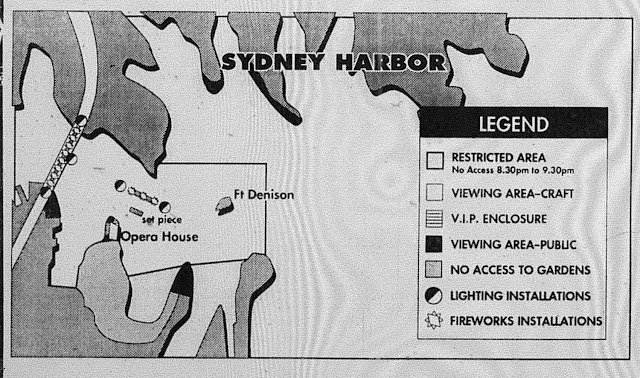 As per the year before, the music for the display was simulcast on 2DAY FM and those attending the fireworks were invited to bring their Sony Walkman along. Even if you are watching the fireworks this Thursday, you will need to take your Sony Walkman (no joke you can get them still) or Ipod Nano if you want to listen to the soundtrack.

Sydneysiders certainly flocked to it as hundreds of thousands descended on Sydney Harbour. It was believed that as many as one million flocked to central Sydney though The Daily Telegraph mentioned of fewer crowds at The Rocks.  For those who didn't flock to the harbour, they were partying the night away at Darling Harbour. In fact it was quite hard moving around that part of the city according to The Sydney Morning Herald on January 1. 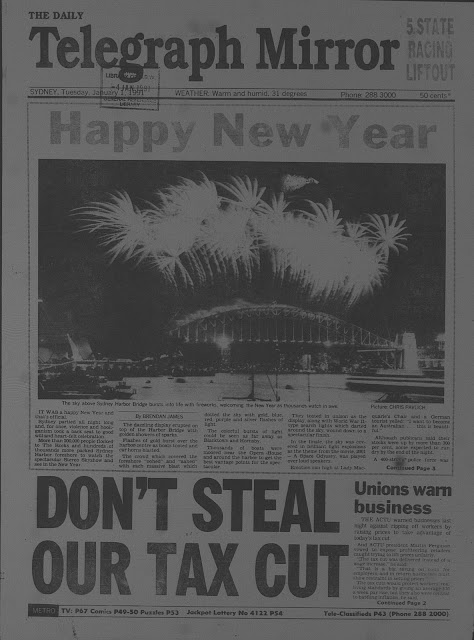 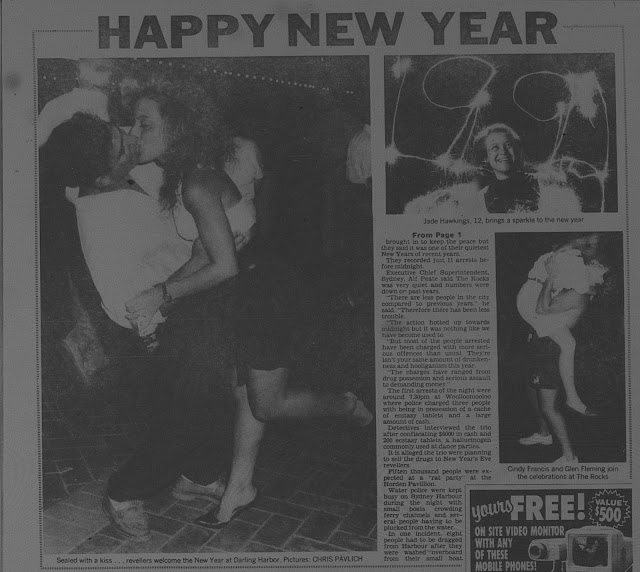 There were plenty of buses and ferries to get you around.

Rail services were increased, though there were concerns over the lack of interurban trains running after midnight.  The Daily Telegraph Mirror reported on its commuter club page on December 31 that there very limited interurban services. Central Coast commuters only had one train after midnight - 12:35am to get them home and one extra service to Wollongong an hour later. The explanation by Cityrail was that there were celebrations in those regions that did not necessitate the extra trains.

I don't think people will have much to worry about in terms of heading into the city to celebrate on Thursday evening with lots of trains to operate throughout the evening. As celebrations have grown, transport authorities have had no choice but to respond.  There will be plenty of buses and ferries as well, though many city bus services will have to be either re-routed or suspended to cater for closures to city streets. Ferries will also have to stop for the fireworks. With so many people travelling into the city and harbour, it's imperative that as many services as possible can be provided. And we will smash Melbourne  Melbourne are pretty slack shutting down rail stations for no reason, for instance, this Thursday and funnelling revellers to Flinders Street & Southern Cross Stations. Circular Quay Station here in Sydney will close to those arriving by train between 6pm and 1am.

One thing that hasn't changed is the international interest in the night's festivities by visitors to Sydney who got into the spirit of celebrations. One German was reported by The Daily Telegraph Mirror (see above) wanting to become an Australian. A quarter of a century later, they come by the planeload and in fact it has become a pilgrimage as the celebrations are now the best on earth. In f,act you will be lucky if you can find Sydneysiders at some sites Thursdayday like Mrs Macquaries Chair, which attract the global visitors because of the spectacular view of the Harbour Bridge & Opera House.

Finally this is my last flashback for the next four weeks. Our Property Advert of the Week entries will continue through January given their popularity by visitors to the site.