As we know, 1969 was a huge year. I would see 1969 as pivotal year in the history of Miranda Fair/Westfield Miranda.

It was in this year that the growing Westfield Corporation purchased the centre from Myer for $10 million. Immediately, plans to expand the centre were lodged with Sutherland Council.

The expanded centre (illustration above) was proposed to be twice the size of the 1964 complex and would now extend to the Kingsway. Farmers would exapnd their existing store, a new supermarket, hardware store and junior department store. As for the original centre, it had been designed with future expansion in mind.

Expansion plans were approved in November 1969 by Sutherland Council. As a condition of approval, Wandella Road would be upgraded from the Kingsway to President Avenue. This included the construction of a road bridge over the Cronulla Railway Line.

Final approval was given in early 1970.


By the end of 1970, Grace Bros would join as the "junior" department store and Nock & Kirbys would open a store in the expanded centre. 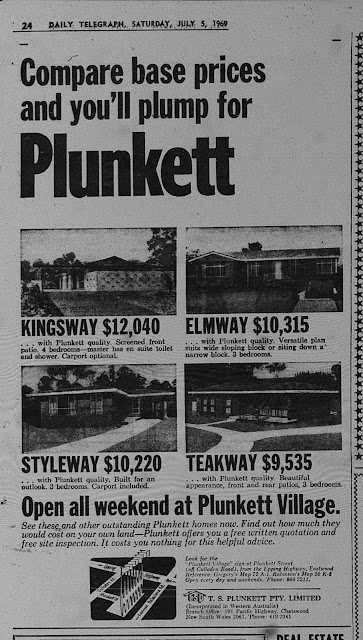 This week, I share some newspaper advertisements from retailers that opened at Miranda Fair in 1964 when it was opened.

To read more about the opening of Miranda Fair in 1964, click here. Also, if you want to read how the centre was conceived, click here. 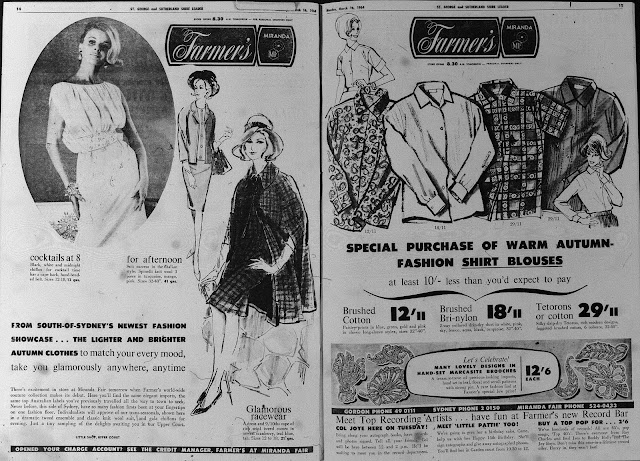 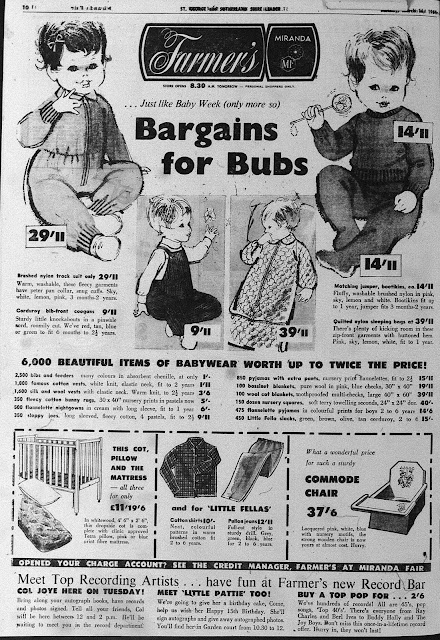 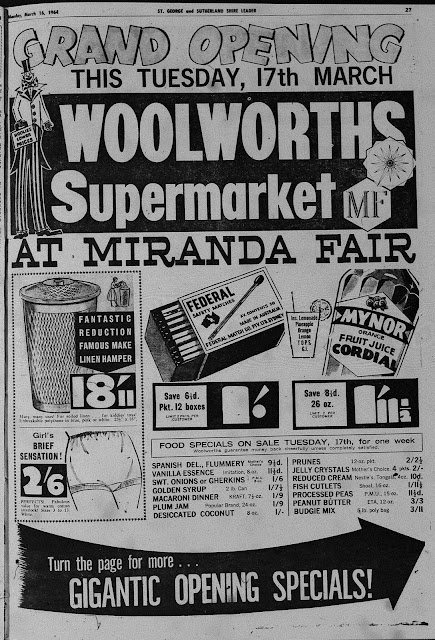 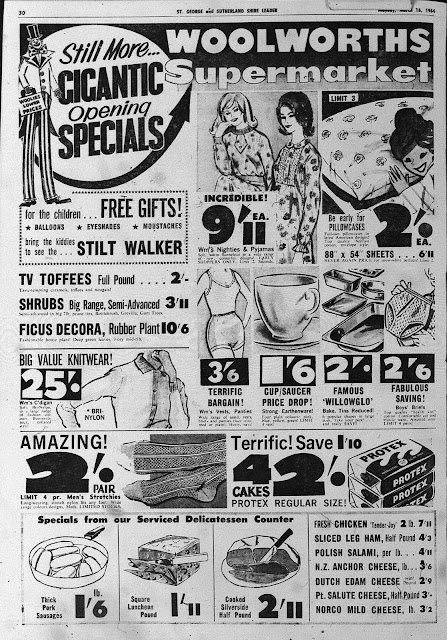 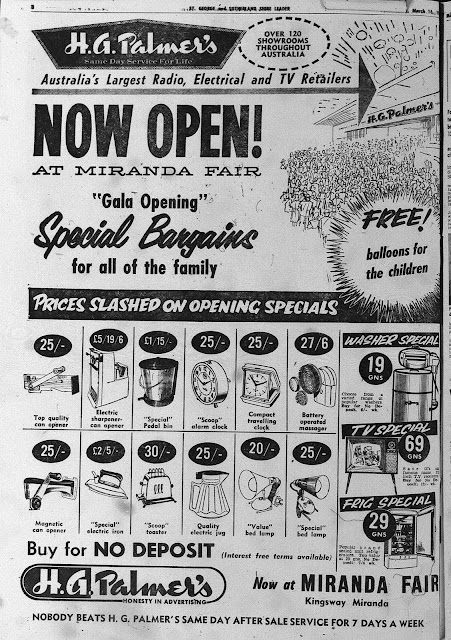 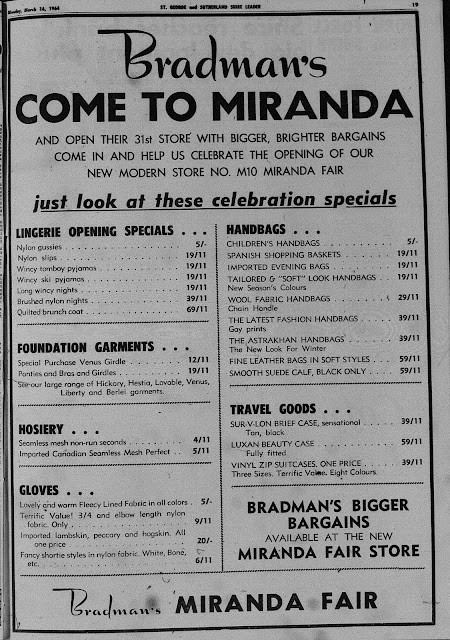 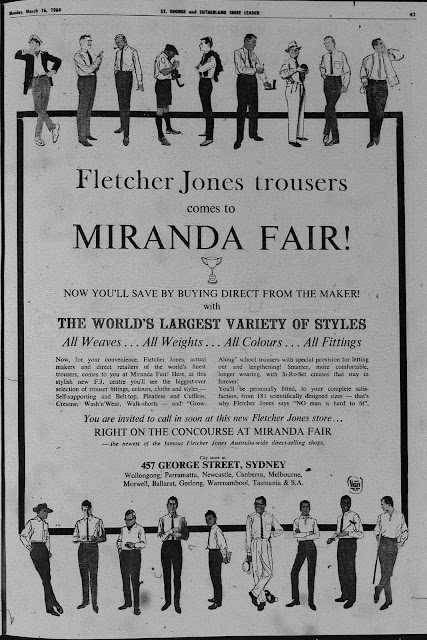 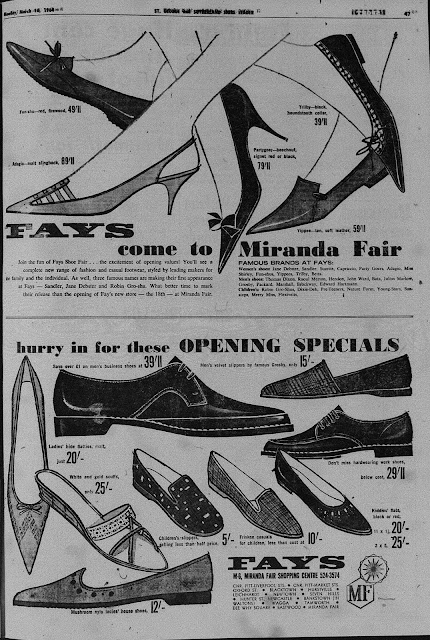 Below is an advertisement advertising apartments for sale in the Eastern Suburbs by Hayson Associates. 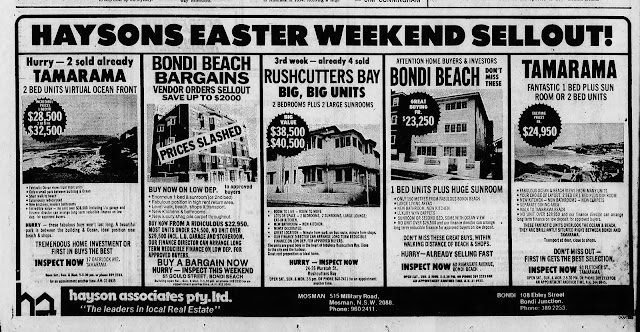 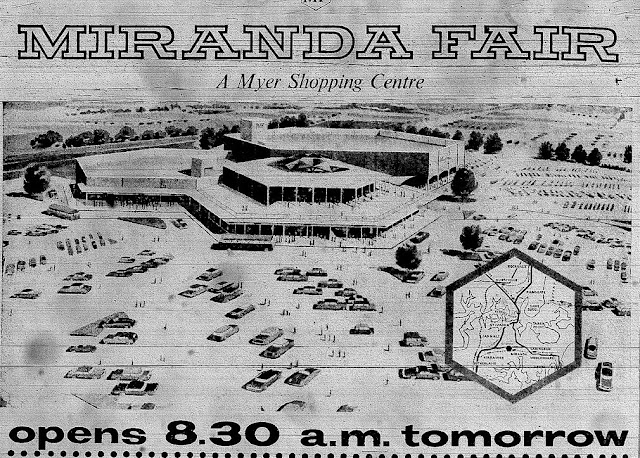 A few months back, I looked at the conception of what is now Westfield Miranda. This week, I look back at the opening of the centre in March 1964.

The St George and Sutherland Shire Leader provided detailed coverage, and bought out a special edition on March 16, 1964. 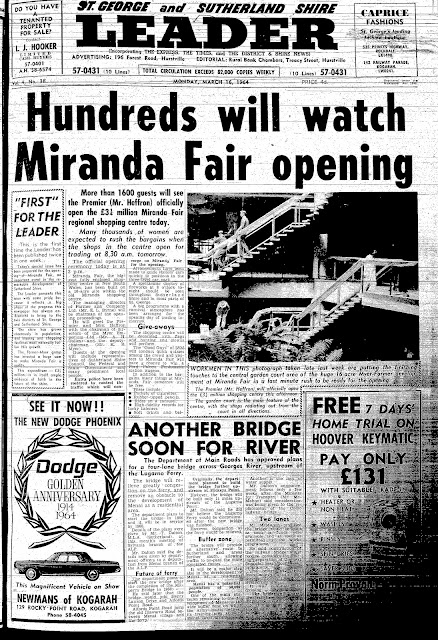 Above: Page 1 of the special edition of The St George and Sutherland Shire Leader published on March 16, 1964.

Below is an advertisement to promote the opening of Miranda Fair, marketed as the "largest shopping centre under-one-roof" in New South Wales. 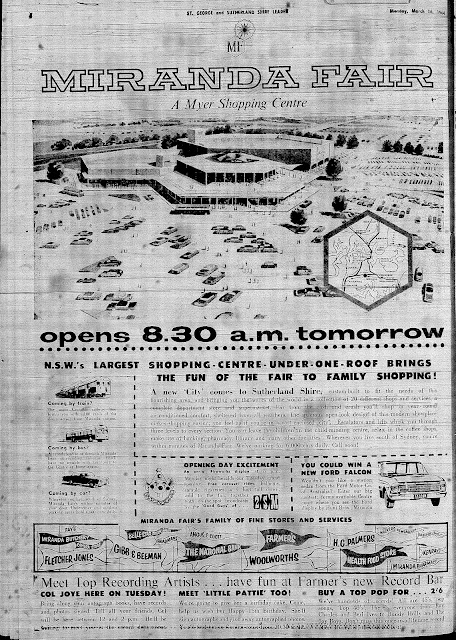 Opening day was March 16, 1964 with trading commencing the following day. NSW Premier Ron Heffron was given the privilege of opening the 3.25 million pound (6.5 million dollars) centre before 1 600 guests. A highlight of the opening ceremony was the arrival of a helicopter to deliver newspapers. That evening, a special fireworks display was put on for the locals.

The premier lavished praise on the new centre as reported by The St George and Sutherland Shire Leader in its edition of March 18, 1964 (see below). 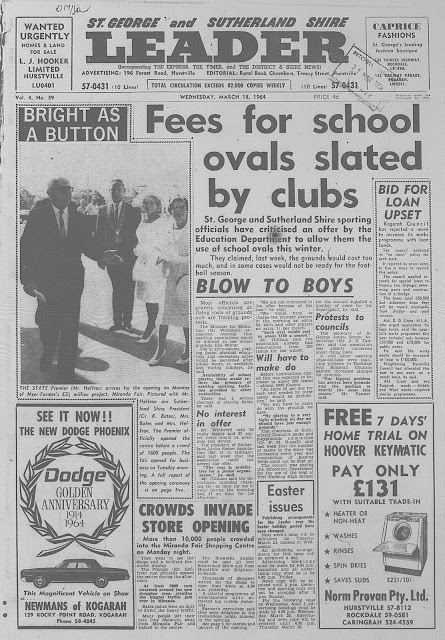 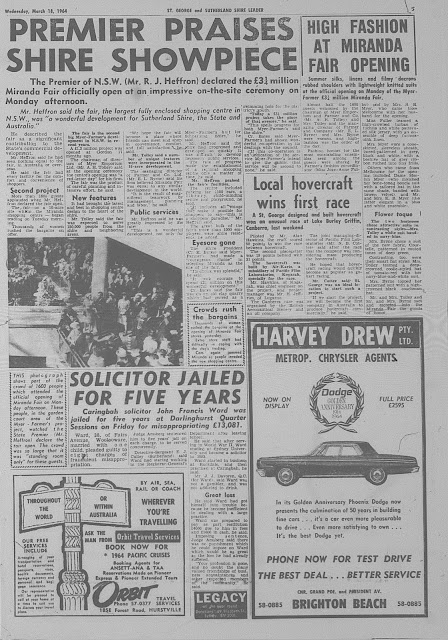 Farmers anchored the centre with a three level store and was supported by a variety of familar names both at the time and/or presently - Woolworths, Angus & Coote, Fletcher Jones and H.G. Palmers, Kenray's and Fay's.

Three tenants from 1964 still trade in the centre today. Woolworths still maintains a presence through its supermarket and BigW store. Angus & Coote is currently located on level 2 next to BigW.

Myer can also claim that it has been present since day one. Farmers was owned by Myer in 1964. In 1976, Farmer's stores were re branded as Myer.

In 1983, Myer bought out Grace Bros which also had a store in Miranda. Myer stores in Sydney were either re-branded as Grace Bros or closed if Grace Bros was trading nearby. As Miranda also had a Grace Bros trading on site, it was allowed to remain open.

All Grace Bros stores in NSW and the ACT were rebranded as Myer in 2004.

Below is another feature article from The St George and Sutherland Shire Leader as published on March 16, 1964. 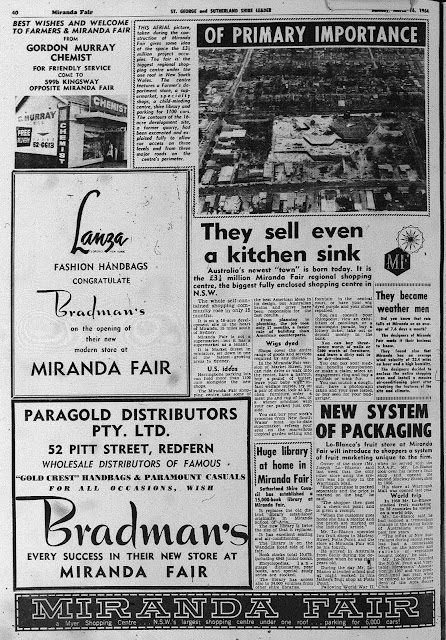 Next Week, I will provide some additional clippings associated with the opening.

For around 35 years The Top of the Cross/Town Motel was a popular hotel in Kings Cross. In 2001 apartments went on sale before it was formally converted to an apartment tower in 2003.

When I see this advertisement, it feels like its not from 2001 at all. Even the render looks old. 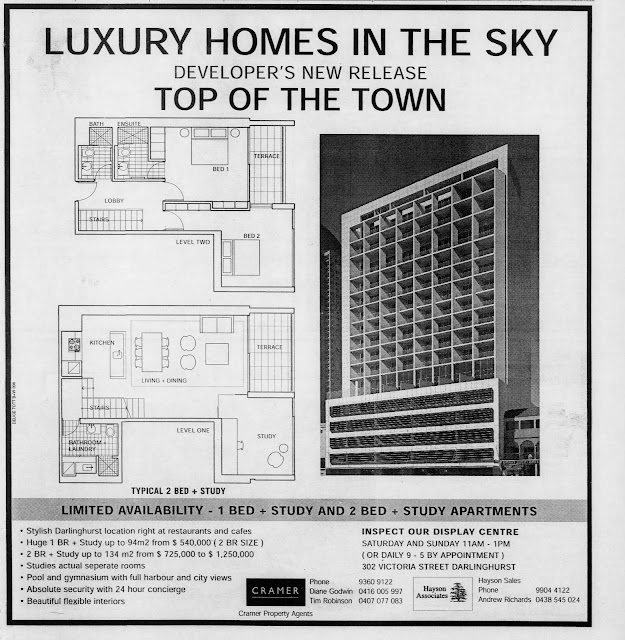 In 2015, I posted an entry on the original scheme for Port Botany dating back to 1969. Since that time, I have found more material relating to the evolution of the port.

In that entry, I mentioned that Stage 1 commenced construction in 1971 and was not completed until 1979. Formal approval was granted by the NSW Government led by Neville Wran in January 1977.

This decision would mark the beginning of the end of Sydney Harbour acting as the main port for Sydney as concerns were raised over the harbour's ability to cope with increased shipping traffic and handle container shipping.

Container and Bulk Liquid Berths would be built, but a proposed coal loader would not proceed.

Below is coverage from The Daily Telegraph on January 26, 1977. 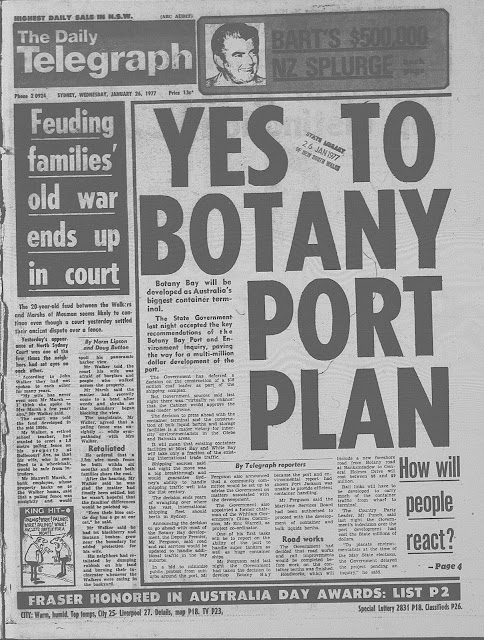 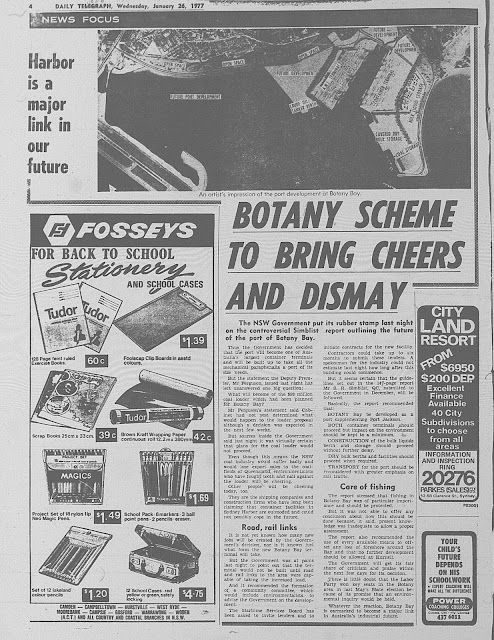 In 1969, Security Estates were promoting the sale of blocks of land from a "large development corporation". Going by the advertisement, the blocks of land were for sites in the Blue Mountains. 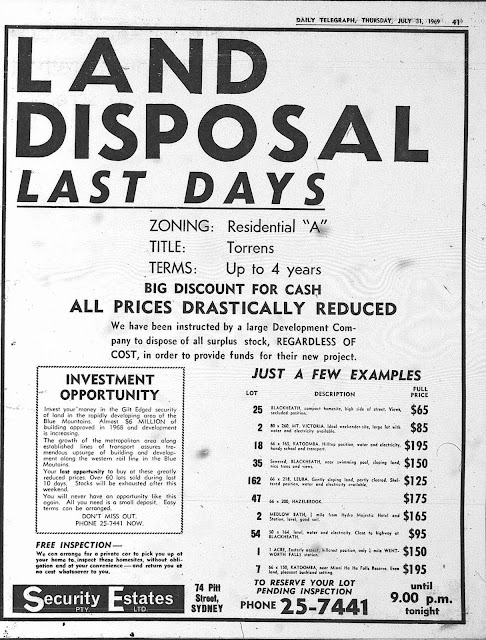 Recently developers have sought to redevelop the office tower at 201 Elizabeth Street which was once known as the T&G Tower (which replaced the original T&G Building of 1929). Redevelopment would have seen the office tower gutted and converted into a mixed use tower comprising of a hotel and apartments.

The recent sale of the tower from owners Dexus and the Perron Group to Charter Hall and Abacus for $630 million combined with a struggling property market will mean that for now, 201 Elizabeth Street will remain an office tower.

It is interesting to note that fifty years ago, T&G were keen to knock down its 1929 building and replace it with a modern office tower which was different.

A sign of redevelopment can be seen below from an article that was published in The Daily Telegraph in 1968. T&G purchased three buildings located on the corner of Park and Castlereagh Street. As with any redevelopment, there is initial denial of any redevelopment. 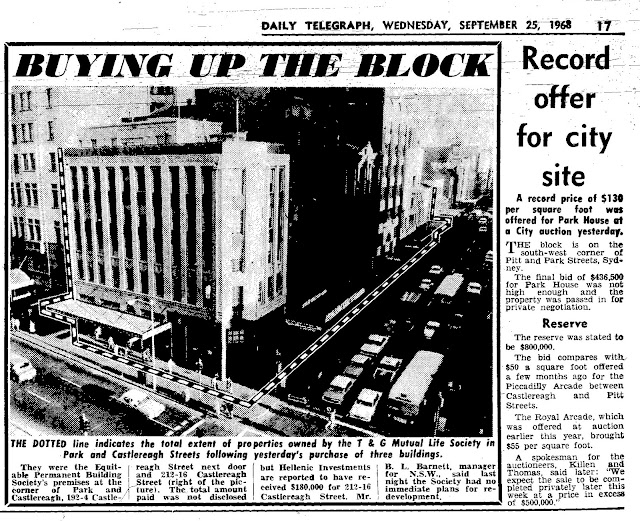 The following year, T&G unveiled their plans to redevelop the entire block bounded by Elizabeth, Park, Castlereagh and Bathurst streets. Two towers were to be built. The taller tower at 39 levels would be the new offices for T&G. Adjoining it would be an 18 storey tower to house medical tenants and dentists.

This would evolve to become Aetna Life Tower which is regarded as one of the worst designed buildings in Sydney.

The design was finalised in 1972 when formal approval was granted. Excavation of the site had begun. 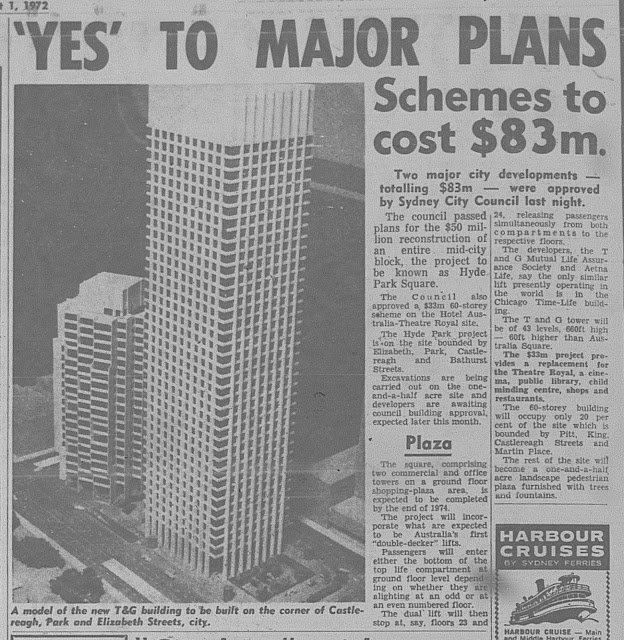