More than 18 months had elapsed since Park Plaza IV had been proposed by the Bond Corporation for their site at 2 Park Street in the second half of 1988.

It was now March 1990. A year earlier, the Bond Corporation had sold the site to a Japanese Consortium comprising of Japanese companies Kumagai Gumi and Sogo (Japanese Department Store chain). Total cost was approximately $278 million.

The new proposal was designed by Crone and Associates and Kisho Kurokawa known as Park Tower. The podium would contain a shopping centre anchored by Japanese department store chain Sogo with the tower rising above it. 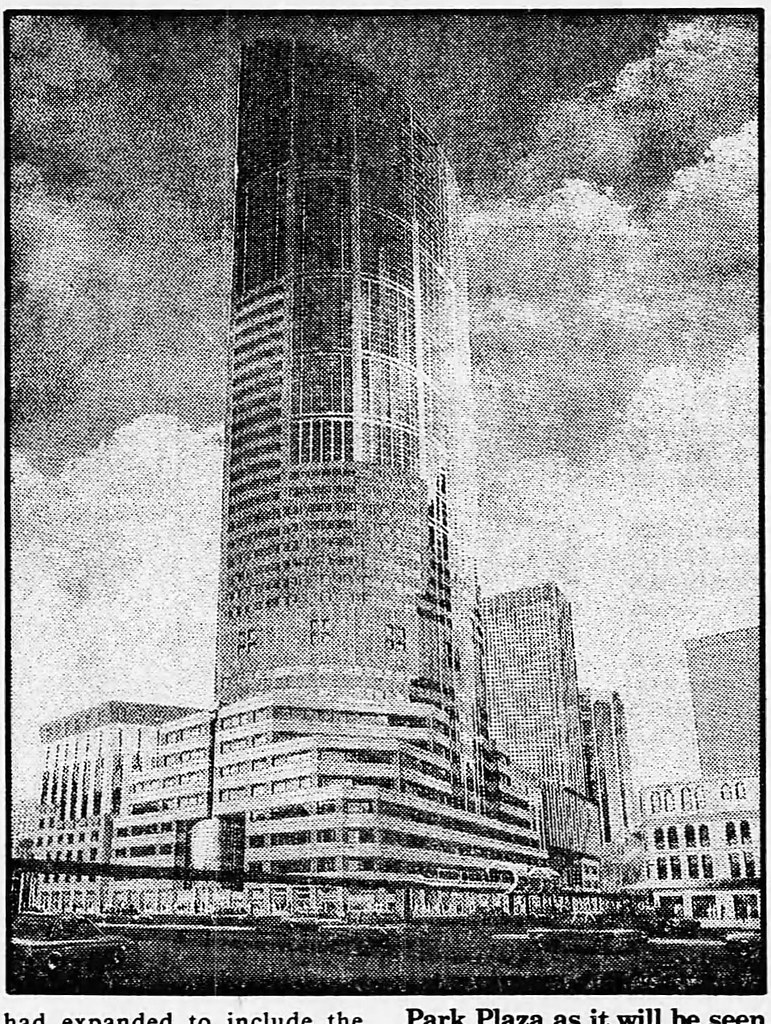 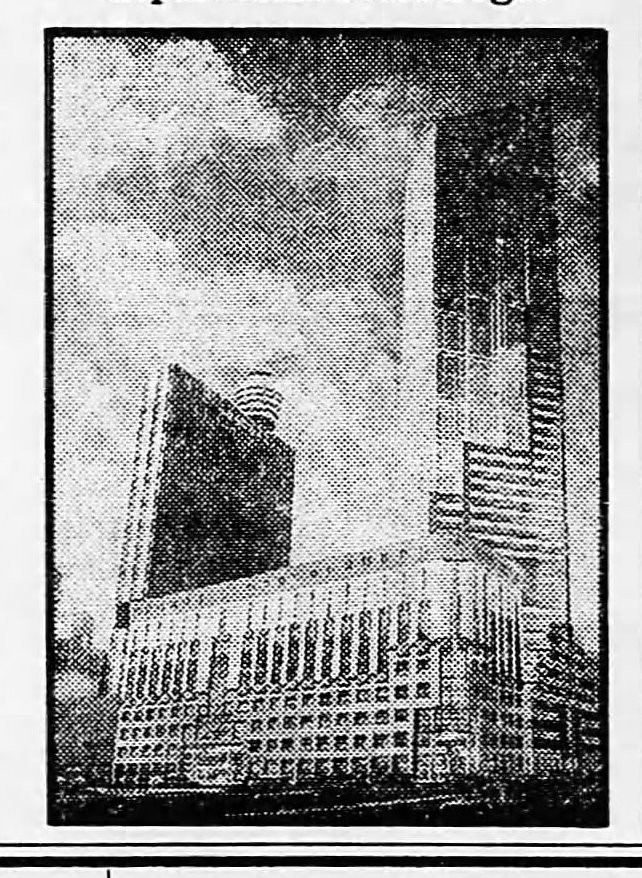 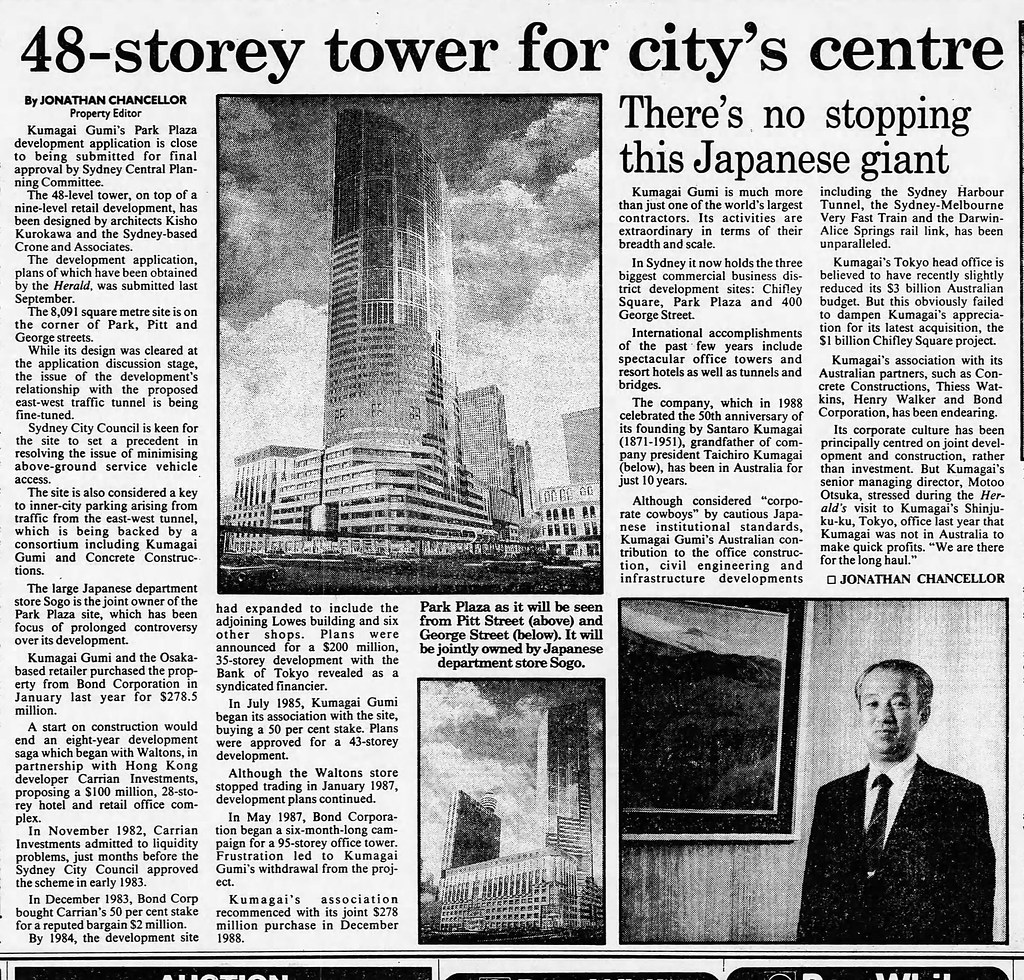 The design of the tower itself is similar to Melbourne Central in Melbourne which is triangular shaped. Kisho Kurokawa was the architect for the office and retail complex.

However, the eastern side was to be curved to maximise the harbour and ocean views.

Melbourne Central has two antennas, whereas Park Tower would have nil.

Soon afterwards Sydney (and the rest of Australia) faced the recession that we had to have which would only delay construction more. The hole would remain empty for even longer.

Below is a 1968 advertisement from The Daily Mirror, promoting its Exhibition Homes Fair at Guildford. 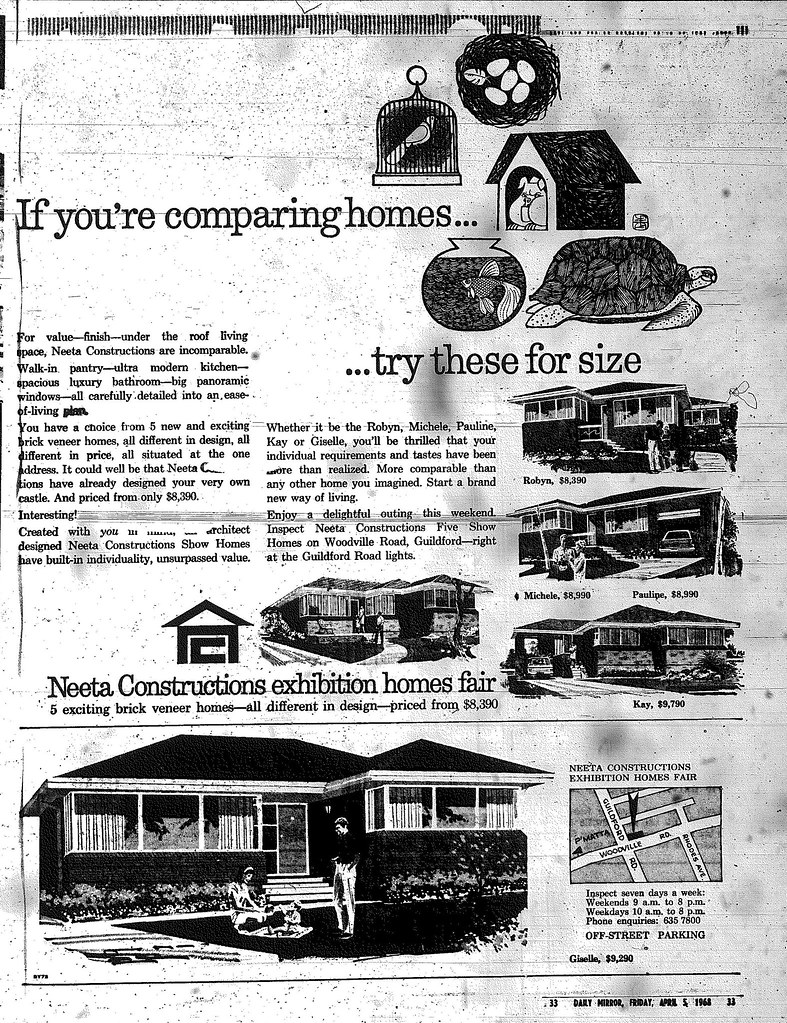 Here is a Google Streetview image of the former site as of November 2017, with the former display homes still on site.

SERIES: The Evolution of the Citigroup Centre - Park Plaza IV(1988)


Last week, we looked at another setback for the Bond Corporation in their attempts to build a major tower on the former Waltons Department Store site in Park Street when plans for a 79 level office tower were scrapped knowing that the plans were not going to be approved.

In September, plans were unveiled for a scaled down 56 level tower, which had similar setbacks to the 79 level scheme. Crone & Associates continued to remain as architects.

It would be the last proposal bought forward by the Bond Corporation. In January 1989, it sold the site to a Japanese Consortium comprising of Japanese companies Kumagai Gumi and Sogo (Japanese Department Store chain) for approximately $278 million.

Below is a 1968 advertisement for units that were on sale at 47 Wharf  Road in Birchgrove known as The Outrigger. Birchgrove has progressed significantly over the past five decades. As for the ten boat marina, there is a wharf, but I don't think ten boats (like those in the advertisement) would fit there. 10 Tinnies maybe??? 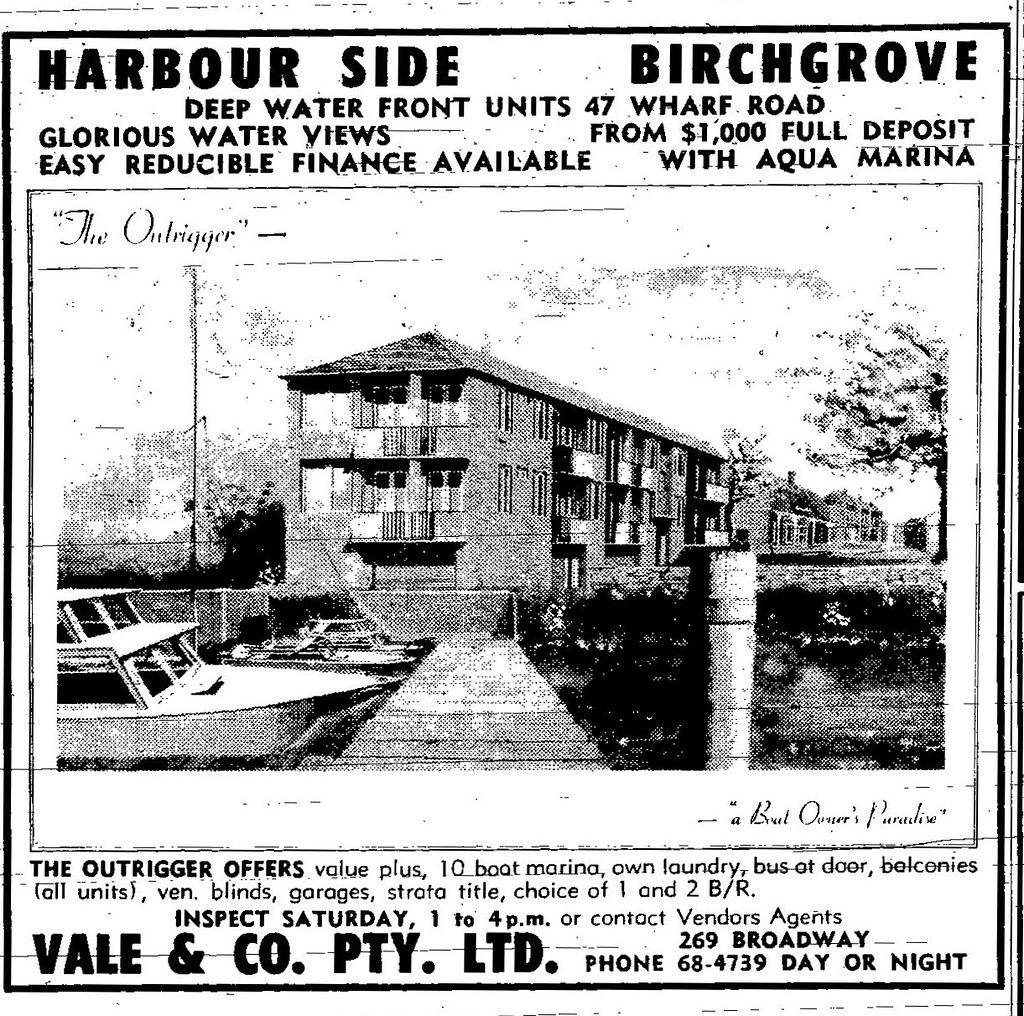 SERIES: The Evolution of the Citigroup Centre - Park Plaza (1988)

Last week, we looked at Bond Corporation's Skytower/Park Plaza scheme of 1987. After they couldn't garner support for Skytower/Park Plaza, they went straight back to the drawing board. By the middle of 1988, 22 levels had been removed from his 1987 scheme and lodged plans for a 79 level tower which was 305 metres tall. At the revised height, it was the maximum allowable height that the Civil Aviation Authority would accept. On the Sydney skyline, it would have been the same height as Sydney Tower. Crone and Associates remained as architects. 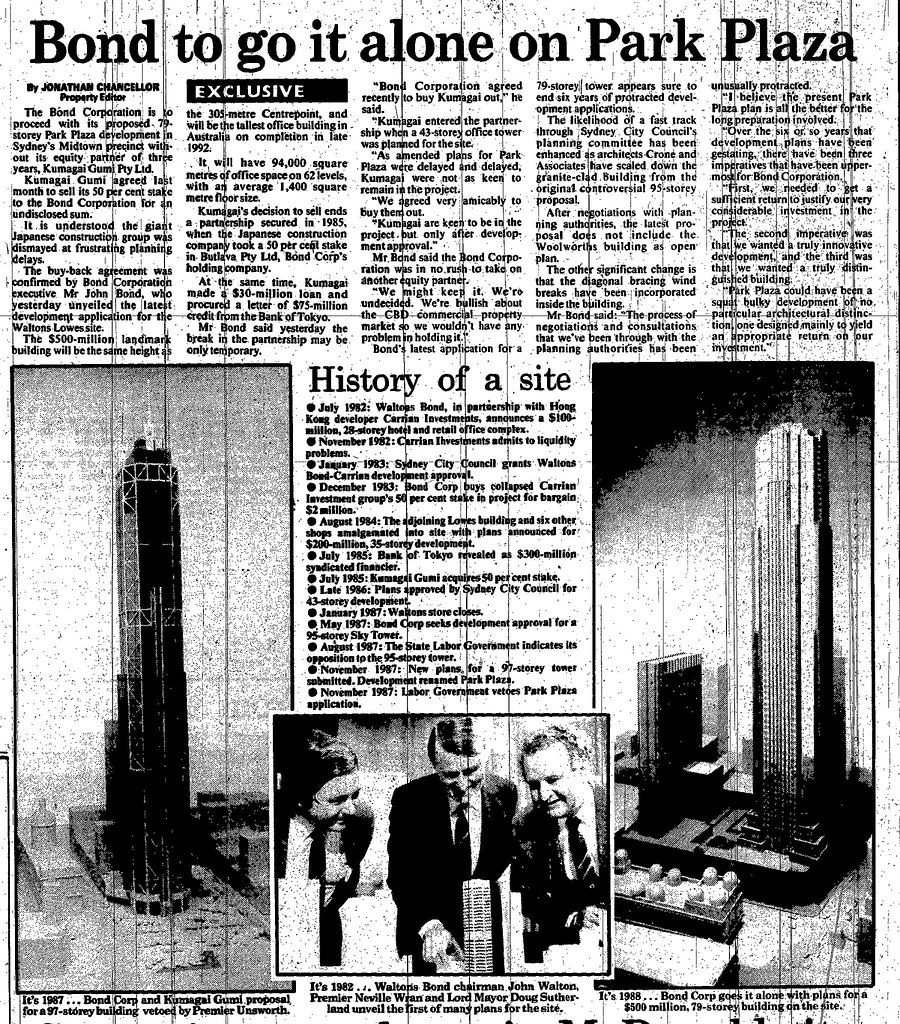 By August, plans were scrapped as the Bond Corporation had been advised by Sydney City Council and the Planning Department that approval would not be given.

Next week, we will look at yet another scaled down proposal for Park Plaza. 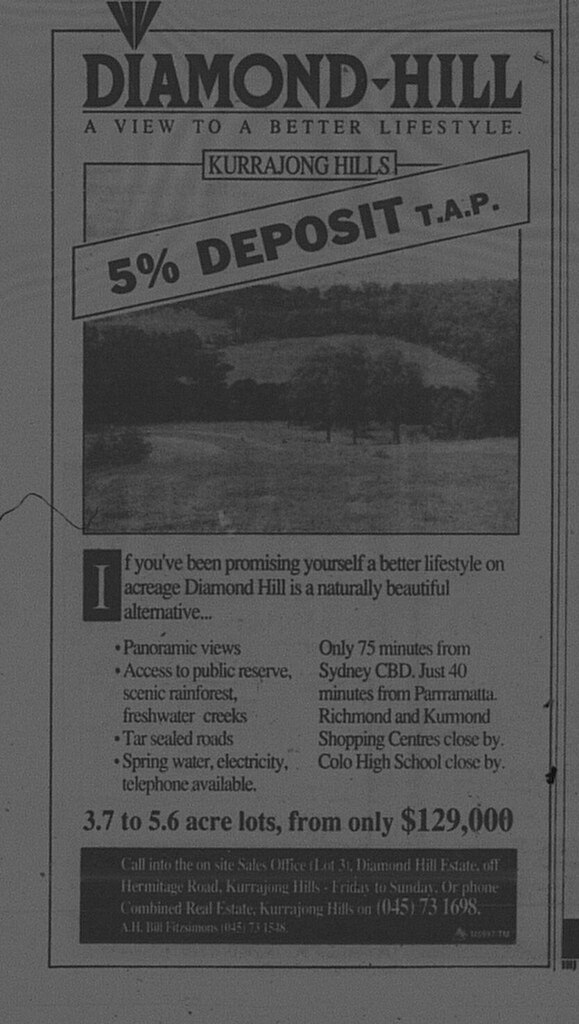 SERIES: The Evolution of the Citigroup Centre - Skytower (1987)

Over the past fortnight, we have looked at the early schemes for the Citigroup Centre in Park Street. In 1982, Alan Bond had purchased the Waltons Department Store chain and wanted to redevelop the site of their flagship store in Park Street. In 1983, approval was given for a retail complex with a 28 level storey office tower rising above it. This was increased to 35 levels and then in 1986, plans for Park Tower were unveiled.

In 1987, Alan Bond continued to pursue the redevelopment of the Waltons Site in Park Street. In February, the Waltons store closed and was demolished ahead of construction.

It was during this year, he unveiled his most ambitious proposal of all - Skytower.

Skytower was more than 2.5 times taller than his previous proposals at approximately 421 metres tall and would contain 102 levels.

While this was slightly shorter than the proposed 445 metre CBD-1 Tower, it received much more coverage. Crone and Associates were the architects.

Plans began to be released to the media in May 1987. Initially, his Skytower proposal was to be 95 levels, but by the end of the year was scaled up to 102 levels.

The Skytower development also included a major upgrade to the Hilton Hotel, which was acquired by Bond Corporation and would be integrated into the complex. The Sydney School of Arts Building in Pitt Street would also be preserved. Bond Corporation was also prepared to purchase buildings along the southern side of Park Street to convert the area into a public square (Sydney Square) as a condition of approval, along with a monorail station. 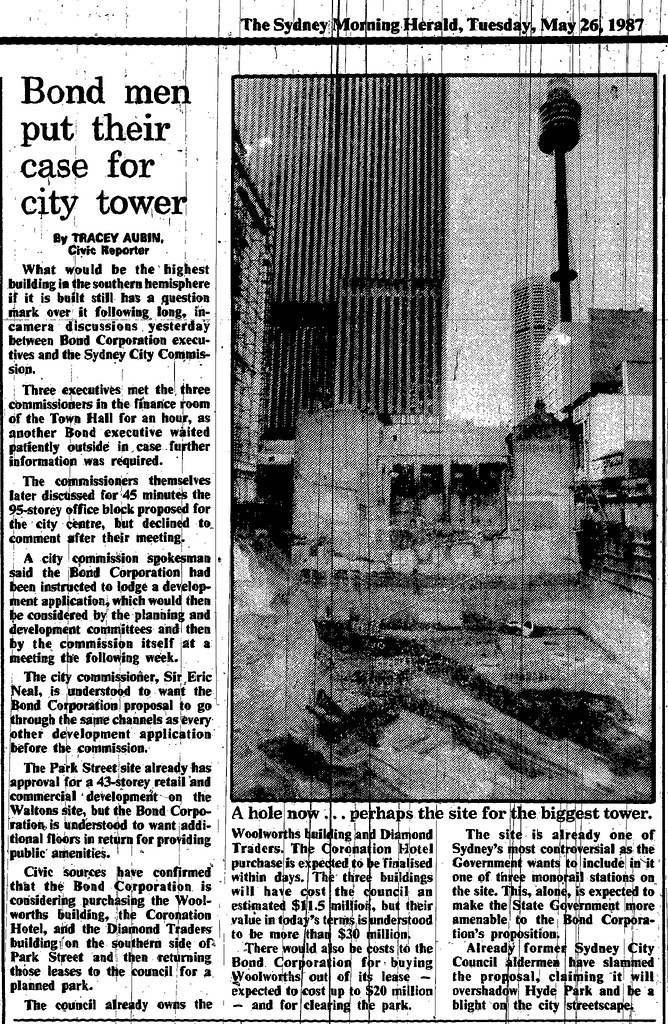 In November, the tower was given the name Park Plaza and Sydneysiders were invited to attend a special exhibition at the Sydney Town Hall.  They could view and comment on the proposed plans. Below is an advertisement (split into several sections) that was published in The Daily Telegraph on November 17, 1987. 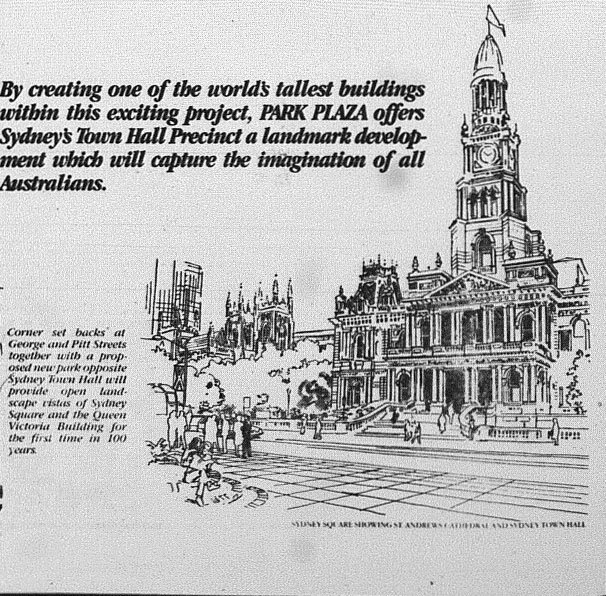 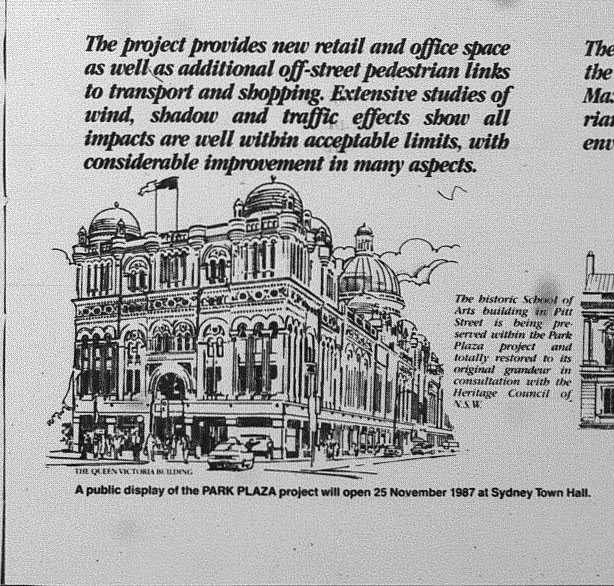 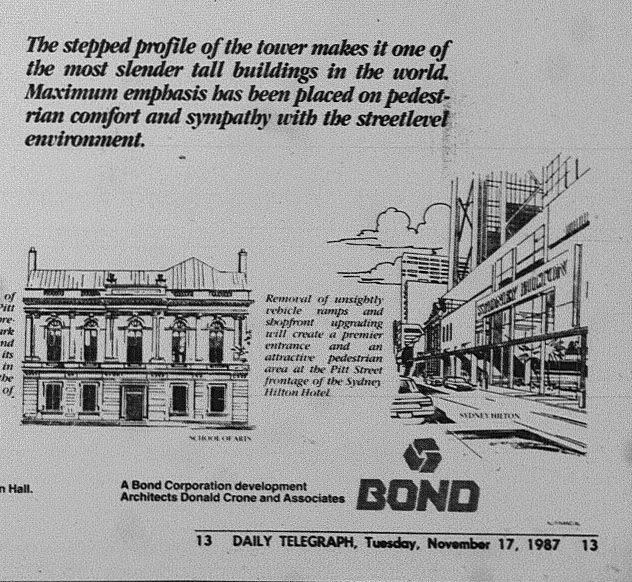 But getting approval was difficult. As reported in my recent feature on CBD-1, Planning Minister Bob Carr wanted to restrict the height of tall buildings in central Sydney. The Civil Aviation Department had also advised Sydney City Council to restrict buildings to 305 metres (height of Sydney Tower).

The Royal Australian Institute of Architects also had their own concerns. President Lawrence Neild questioned the financial viability of the structure given that lift cores would need to take up space on the lower floors. Overshadowing, wind patterns and excess car parking (1000 proposed spaces) were identified as concerns.

It was reported by The Sydney Morning Herald on December 1 that design revisions would result in a reduction of height by 30 levels.

Therefore, Bond Corporation were sent back to the drawing board.

Next week, we will look at his attempt at a scaled down Park Plaza.
Posted by Fabian Amuso at 00:00 No comments:

This week, I share another advertisement promoting the suburb of Wattle Grove dating from 1991. 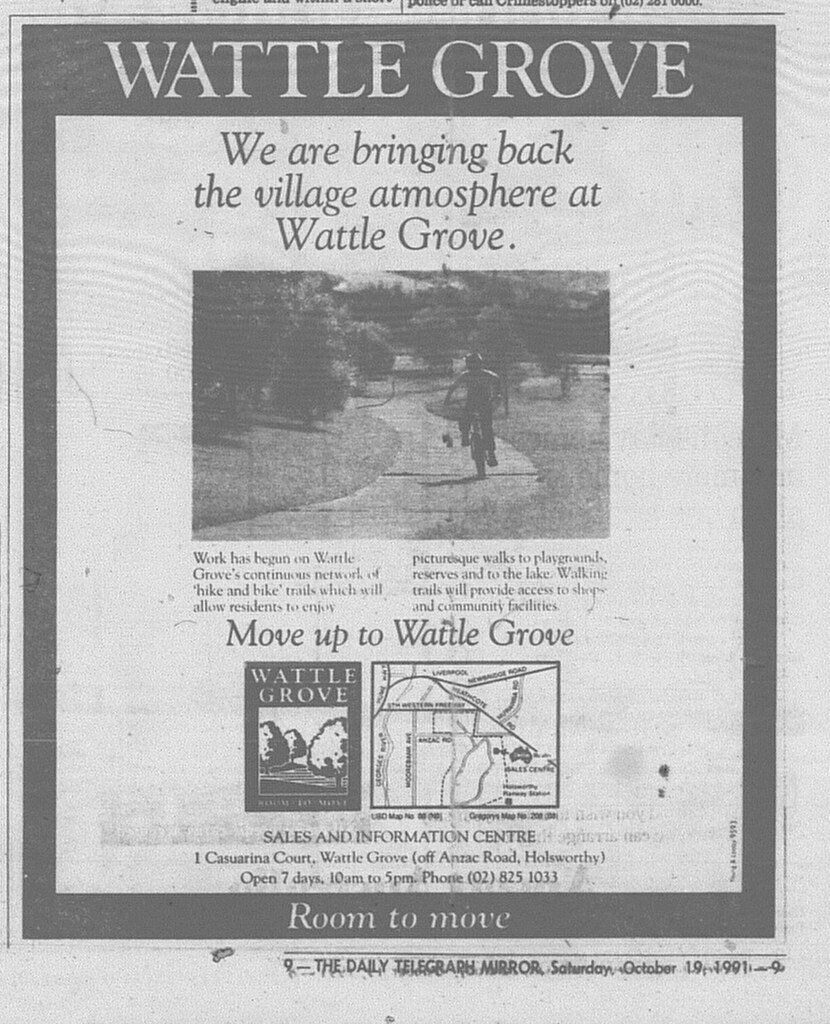 SERIES: The Evolution of the Citigroup Centre - Park Tower (1986)

This week, I was going to publish Alan Bond's Skytower proposal of 1987 as part of my series on the Evolution of the Citigroup Centre in Park Street.

Last week, I had mentioned of two schemes that followed the initial 1982 scheme that was bought forward by Bond Waltons. One was for a 35 level tower and another for 43 levels. I had no information on those schemes but assumed that they were very similar schemes with additional floors.

Richard Braddish, modelmaker at Sydney City Council contacted me during the week and provided me with an illustration of the 43 level scheme. I do not know who was the publisher was so I cannot provide a proper citation. I thank Richard for his contribution and providing information to assist me with this entry (but also with the upcoming entries). 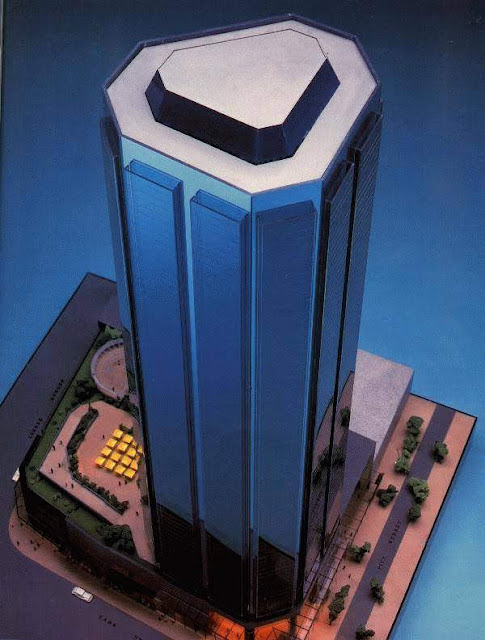 The 43 level scheme is dated from 1986 and was named Park Tower. Like the 1982 scheme, the tower was located towards the south-east corner of the site. The height of the building was 176 metres.

While the entire building has a glass facade, I could some identify some similarities with 108 St Georges Terrace in Perth (Commonly known as the Bankwest Tower) which was under construction at the time for the Bond Corporation. The tower was to be triangular shaped but elements of the tower glass facade were also being embedded.

I am surprised that they went for a flat roof instead of an architectural feature or setbacks. One of the sides faced north-west, which I found odd given that office buildings in Sydney seek to maximise the harbour and ocean views provided by facing towers to face north and east like at the ANZ Tower (2013) which faces northeast to provide maximum exposure to views. It also maximises solar access on each floor.

Next Week, I will finally look at Skytower as Alan Bond sought to reach for the skies and make his mark on Sydney.
Posted by Fabian Amuso at 00:00 No comments: