In 1987, the Sydney Police Centre at Surry Hills opened, and it led to the decommissioning of the Darlinghurst Police Station in Bourke Street, Darlinghurst. It had been opened in 1896 with a lock-up facility built three years later in 1899. The Daily Telegraph produced a two-page feature to mark the end of an era.

It will be preserved for future generations as it is now heritage listed. 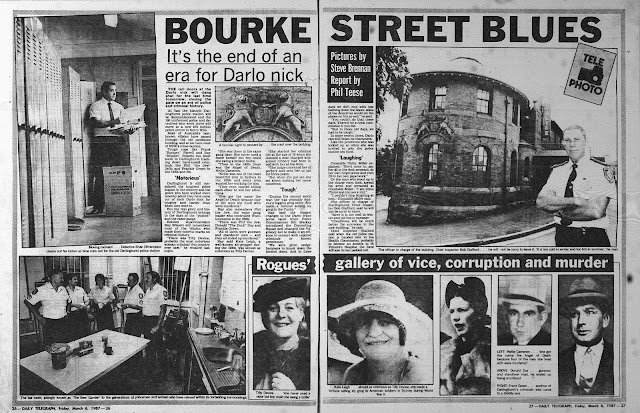 This week, our property advertisement dates back to 1971 when 13 waterfront lots at James Cook Island in Sylvania Waters were listed for Auction. Note the location of the auction - the Anthony Hordern Building in the city. 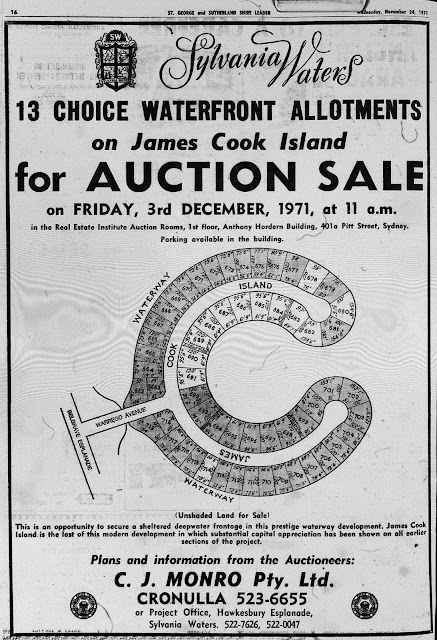 In 1999, planning was underway for the Cross City Tunnel. Sydney City Council was led by Lord Mayor Frank Sartor.

At the time, the Roads and Traffic Authority (RTA) had proposed a 1.6-kilometre tunnel to run under the city from the intersection of Druitt and Kent Streets through to the Eastern Distributor with portals linking through to William Street. Motorists would pay a $2 toll. 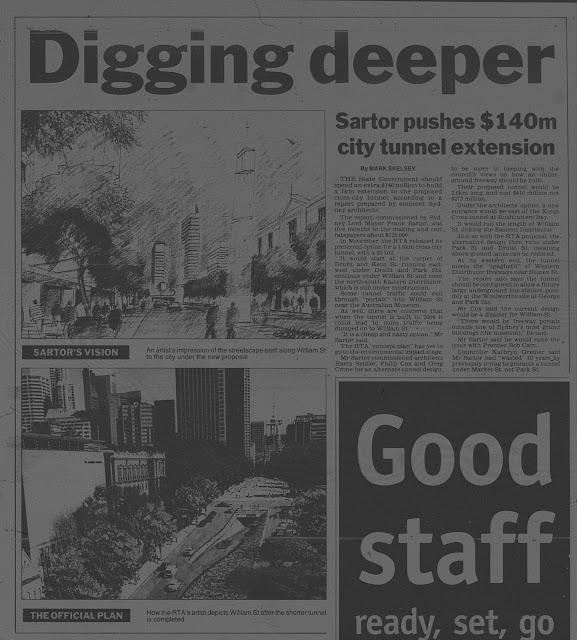 Frank Sartor commissioned a study to determine whether it should be extended further. Leading architects, Donald Crone, Harry Seidler and Phillip Cox proposed extending it through the eastern end of the Kings Cross Tunnel at Rushcutters Bay. This would also allow the council to fulfil their decades-long vision of turning William Street into a pedestrian boulevard.

As for the boulevard, the opening of the tunnel in 2005 led to an attempt to reduce the number of lanes on William Street. This failed when traffic stayed away from the tunnel due to the initial $3.56 toll. William Street still carries large traffic volumes. As for the council, that vision for William Street, remains a vision.
Posted by Fabian Amuso at 00:00 No comments:

This week, our property advertisement dates from 1966. It was published on February 12, two days before the official conversion from pounds and pence to dollars and cents. Windsor Homes were offering blocks of land at "Merrylands" (Greystanes) for a deposit of just fifty pounds.

Fifteen blocks were on offer. Interested buyers had to meet the agents at the corner of Merrylands Road & Canal Street. I've included a link to the corner on Google Earth for those curious to see the area today.

This month, it will be fifty years since Marcus Clarks Department Store closed at Railway Square, after serving the people of Sydney for 82 years. It had been bought out by rival chain Waltons after rising debts.

Just months before closing, it made the decision to reinvent itself as a shopping centre, promising everything under one roof plus one hour of free parking if you showed your docket.

It had become a victim of the rise of suburban shopping centres, which had impacted on retailers in the southern sections of the central business district.

Here is an advertisement that I found from March 1965, as published in The Sunday Telegraph.

Property Advert of the Week: AVJennings "No Worries" Sale (1991)

As Sydney endured the property crash of the early 1990s and recession, AV Jennings was happy to build your dream home for $59 990 (3 Bedrooms) and $79 990 (4 Bedrooms). In addition to that, if you were renting while it was being built, AV Jennings paid your rent.

The featured celebrity in this advertisement was Geoff Harvey who was the conductor of the Channel Nine Orchestra and was on The Midday Show with Ray Martin. 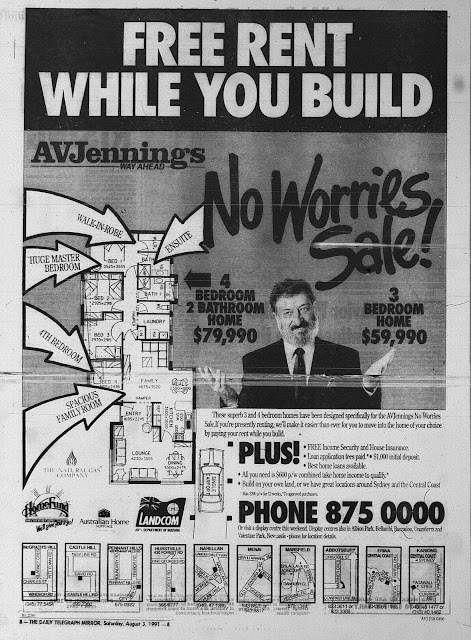 I just want to keep it simple this week given that it is the school holidays and like every other teacher, should be enjoying it. I thought this was interesting given that the newspapers seem to enjoy putting a feature each year where they explore the eyesores that are found Sydney. The Sunday Telegraph decided to let radio presenter Ron Casey vent his spleen on his eyesores.

He identified the following as Sydney's eyesores: 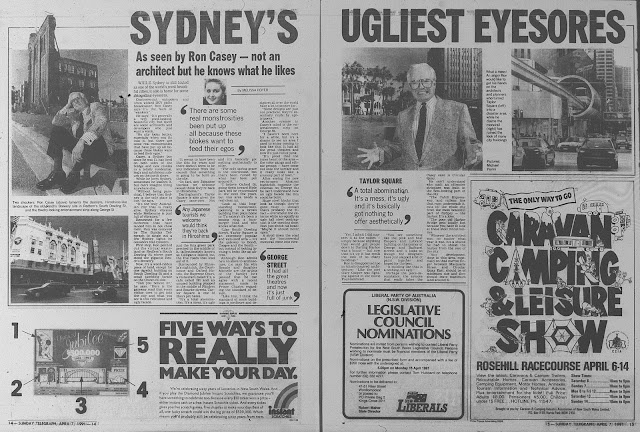 Our property advertisement of the week takes us back to 1994, when Con the Fruiterer was enticing people to check out the display homes available at Elizabeth Hills. 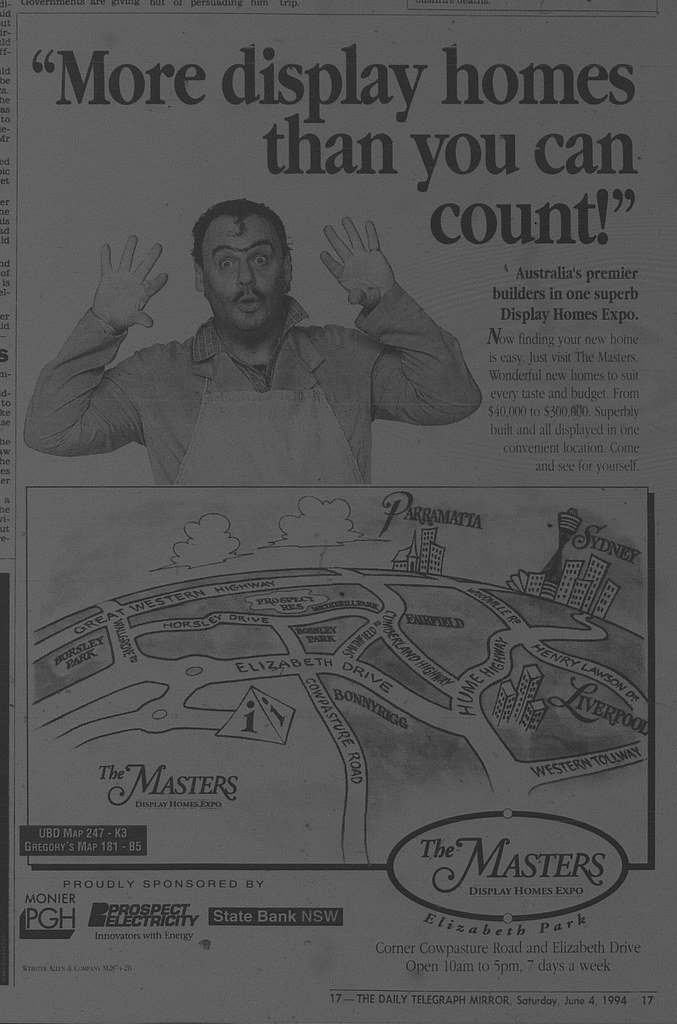 Source: The Masters Display Homes Expo. 1994. "More display homes that you can count (Advertisement)".  The Daily Telegraph Mirror, June 4: 17.
Posted by Fabian Amuso at 00:00 No comments: