This week, we head to King Street Wharf where apartments two decades ago were on offer from $295 000. With the development at Barangaroo, apartments are more highly sought after than ever. If you bought in 1999, it was a very wise move. 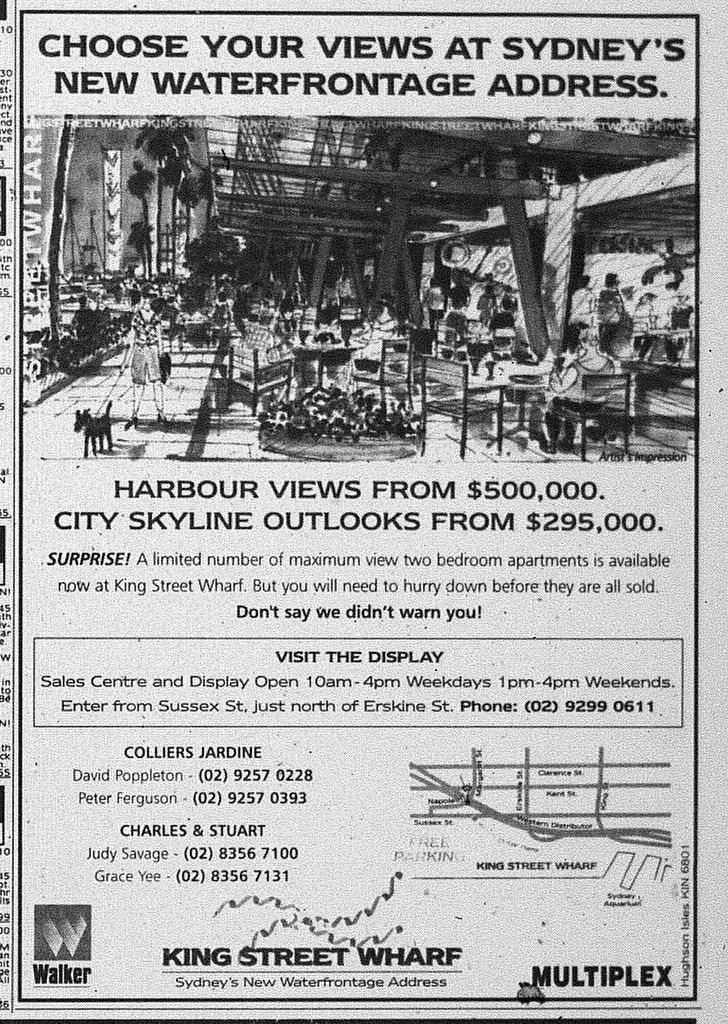 It took thirteen years for the vision of Donald Crone and the AMP to become a reality. Construction of the tower began in 1974 and took 7 years to complete. 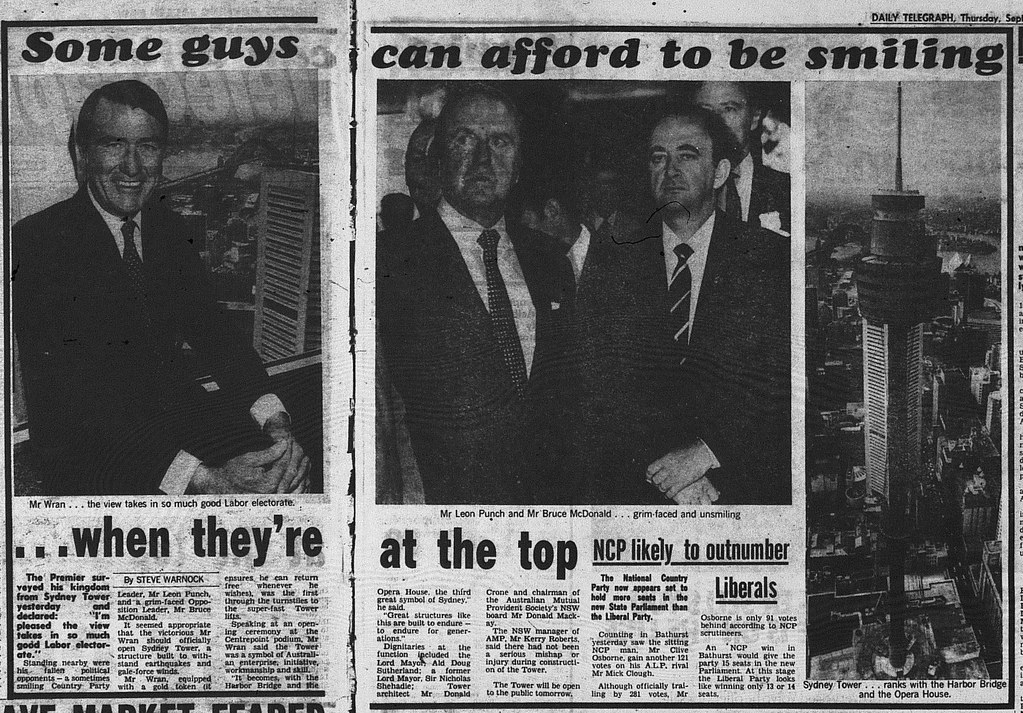 In September 1981, the public was finally allowed inside Sydney's tallest structure. The official opening was on September 23, 1981, by NSW Premier Neville Wran. He received a gold token that gave him free access for life. The public gained access two days later to the observation deck and two revolving restaurants.

The Sydney Morning Herald published a special supplement on September 25, 1981, focusing mainly on the construction of the structure. 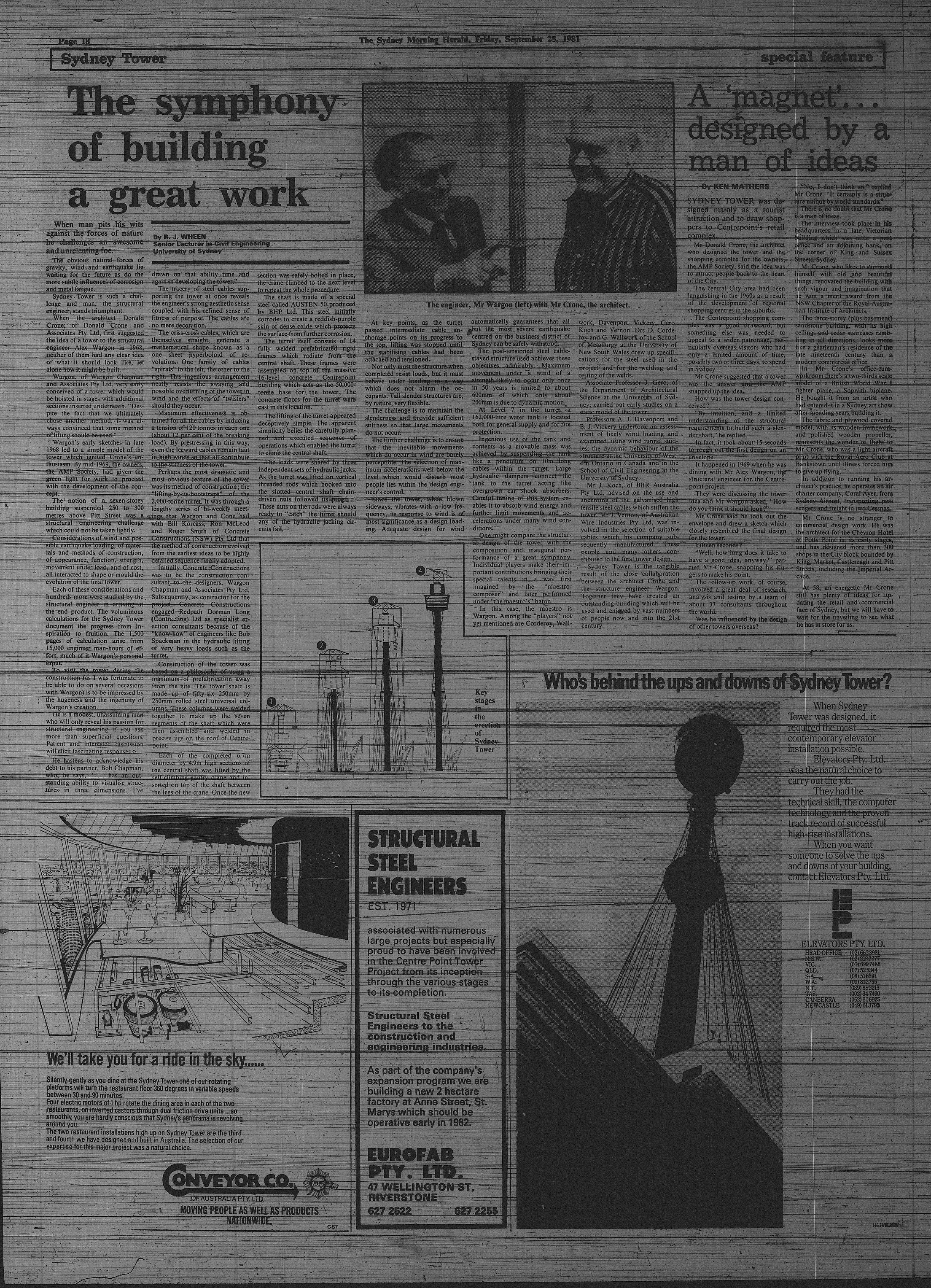 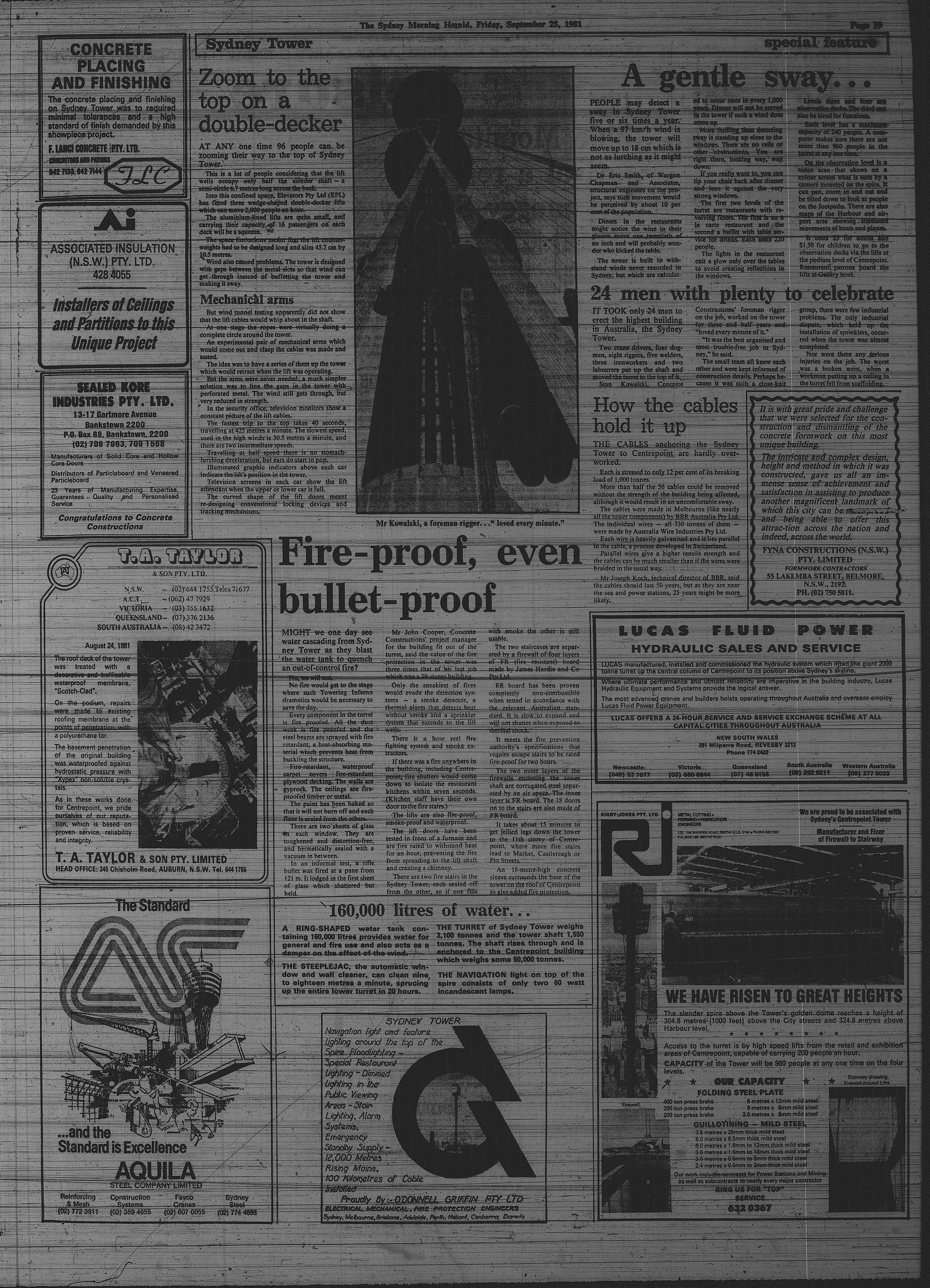 This is believed to be one of the first commercials to promote Sydney Tower.

Crown Sydney will offer an observation deck at a similar height to Sydney Tower when it is completed in 2021, but I think Sydney Tower will continue to attract the hordes.

The construction of Sydney Tower has profoundly impacted on the evolution of the city skyline. It's central location in the "midtown" precinct has meant that Sydney Tower appears to be in the middle when viewing the skyline from any vantage point in the metropolitan area. Sydney Tower hence appears as the "summit" on the city skyline. The photos below illustrate the arc as seen from various locations around the city. 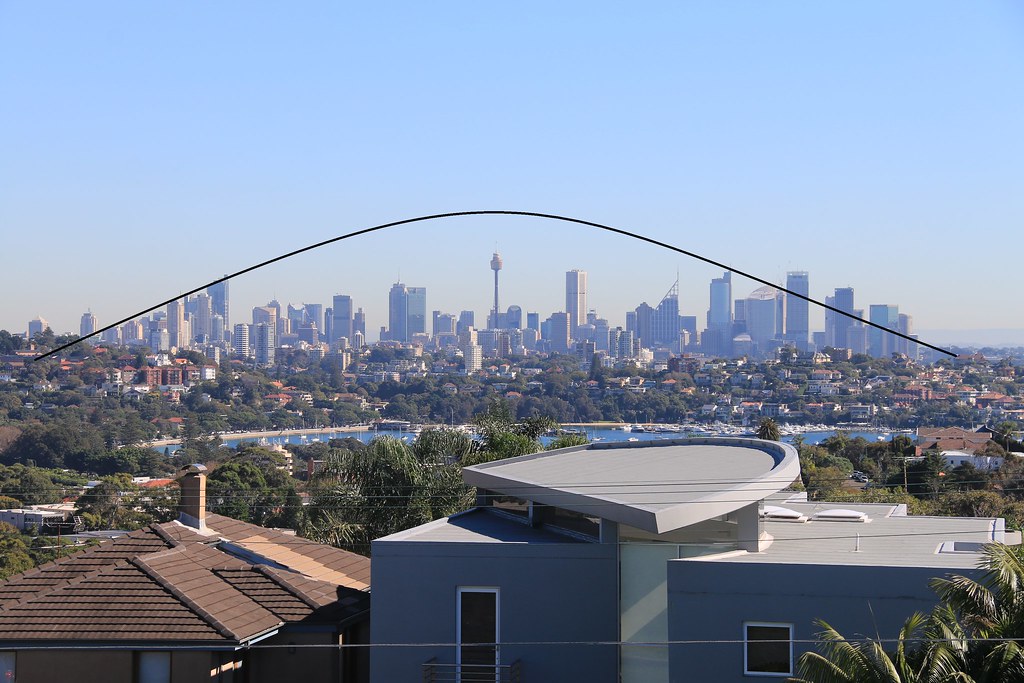 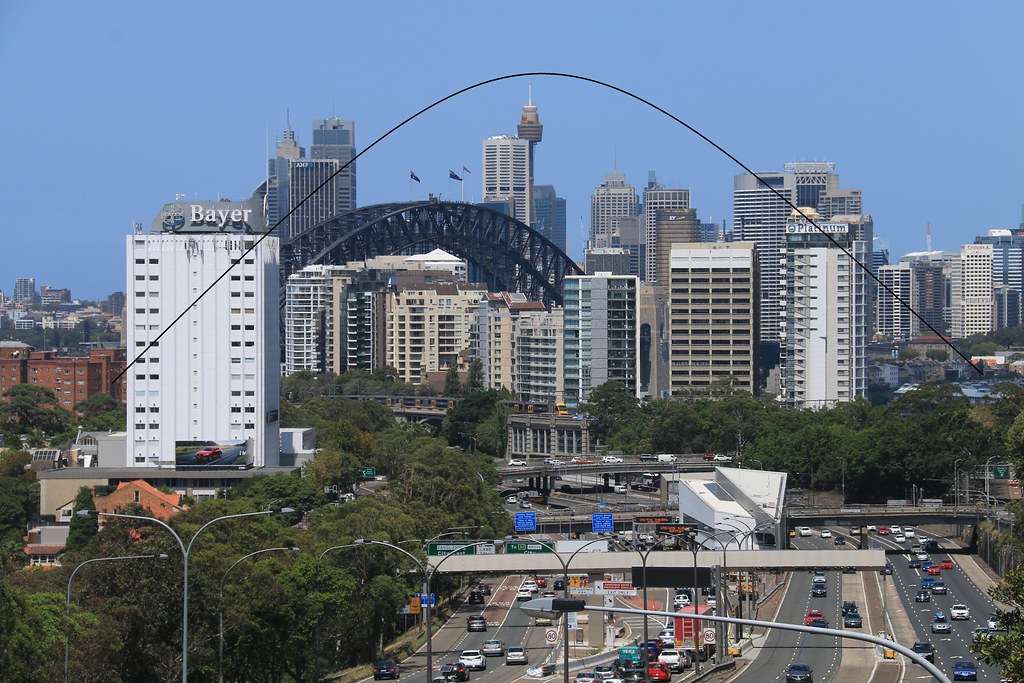 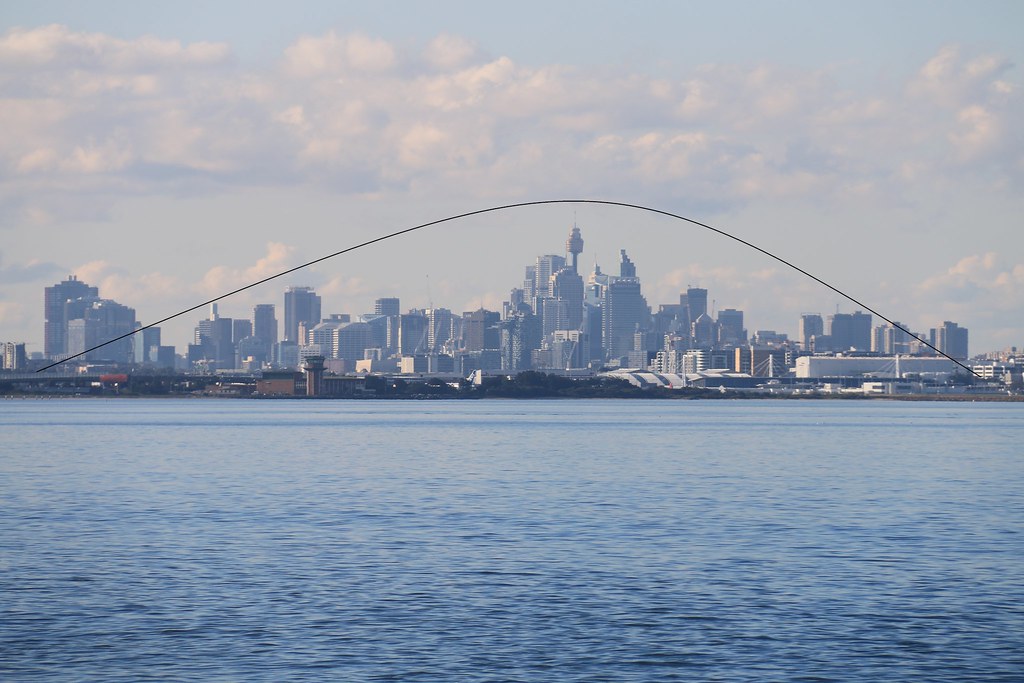 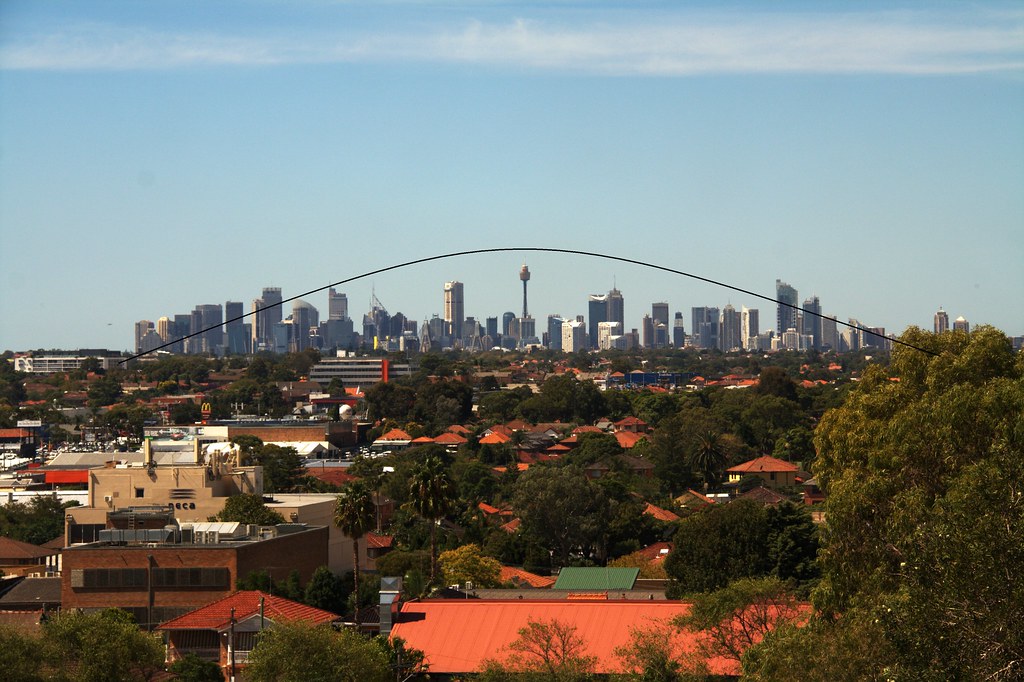 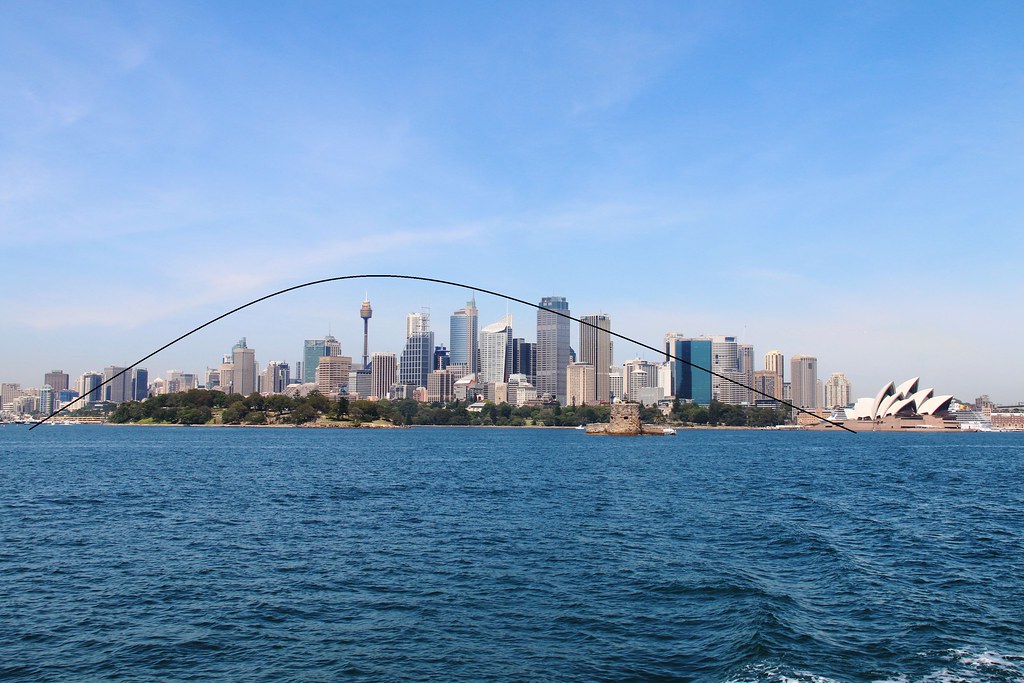 Until recent times, it has also been a yardstick for city development. While planning guidelines control building heights to preserve streetscapes and protect city parks, streets and public spaces from overshadowing, it has also been used to protect the views from Sydney Tower.

As for the tower itself, visitors have been provided with additional experiences including the Skywalk (introduced in 2006) to provide an outdoor viewing experience, 4D cinema feature at ground level.

Sydney Tower and Centrepoint has been owned by Westfield since 2001 after it was sold by AMP. In 2011, Westfield relocated their headquarters into the office building after a major renovation. This included the redevelopment of the retail complex which also encompassed the former Imperial Arcade and Skygarden shopping centres to create one large city shopping centre - Westfield Sydney.

Westfield Sydney also includes the former Sydney Central Plaza directly opposite in the Pitt Street Mall.
Posted by Fabian Amuso at 00:00 No comments:

This property advertisement by Mirvac was published back in 2000, advertising a mix of new housing estates and display homes across the metropolitan area. 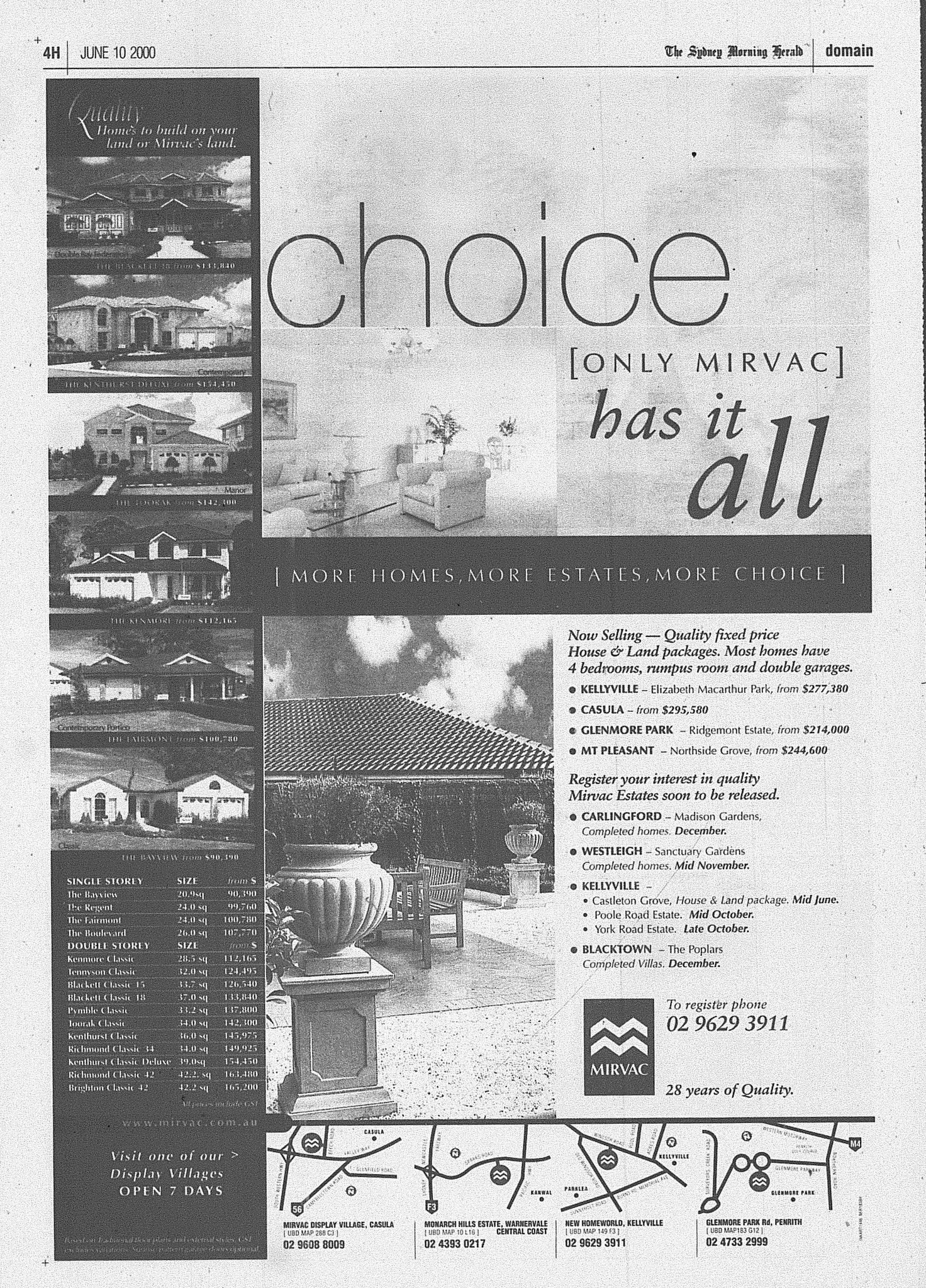 Posted by Fabian Amuso at 12:04 No comments:

Source: The Royal Agricultural Society of NSW. 1993. "Take a friend to the Easter Show" (Advertisement). The Sunday Telegraph, March 28: 143.

For the second time in two years, Easter is early this year and will not fall in school holiday time. On a positive, the Royal Easter Show begins on Friday and goes for 14 days.

This year, the Royal Agricultural Society (RAS) will celebrate the shows of yesteryear. The historical exhibition will return and focus on the 1950s.

Getting into the spirit of the past, I will take a look back at what the Royal Easter Show was like a generation ago, focusing on 1993.

Bare in mind, this was at all at Moore Park.

In addition, admission was $5 if attending after 5pm. There was also $5 entry for pensioners (before 12pm on April 5 and 6.

In 2018, it will cost $42.50 for adults if purchased at the gate, $26.50 for Children and $32 for concession. However, discounts apply if purchased online or at a Woolworths Supermarket. Public transport is also included. For an adult, assume it will cost around $10 for transport to and from Sydney Olympic Park.

Parking was available at Moore Park for $5. 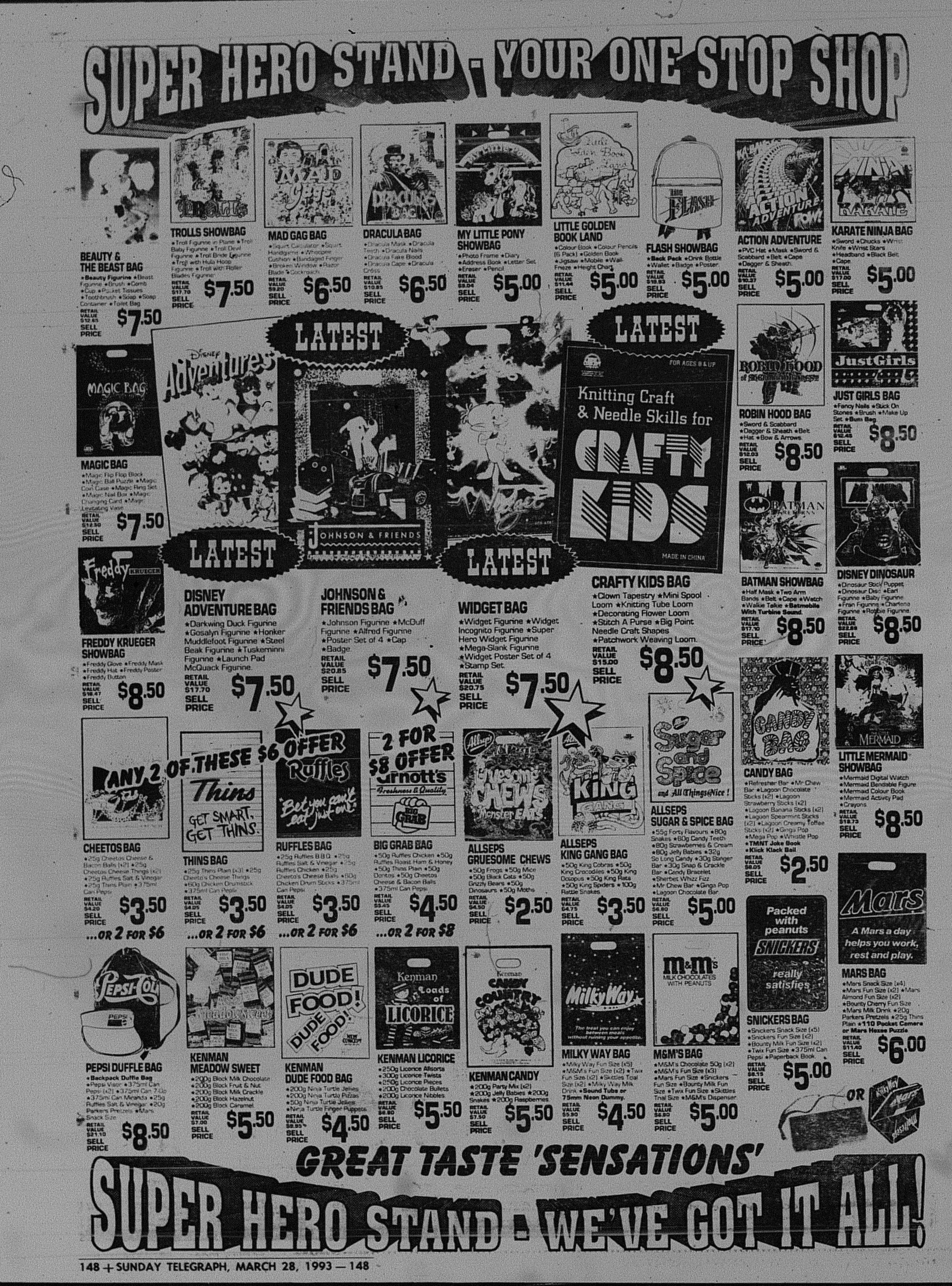 Nestle had better bags in 1993 then than now, though they have branched into "superbags" which do offer the better value for money. Budget or midrange ones in 2018 are a little disappointing and have lost the luster of the past. 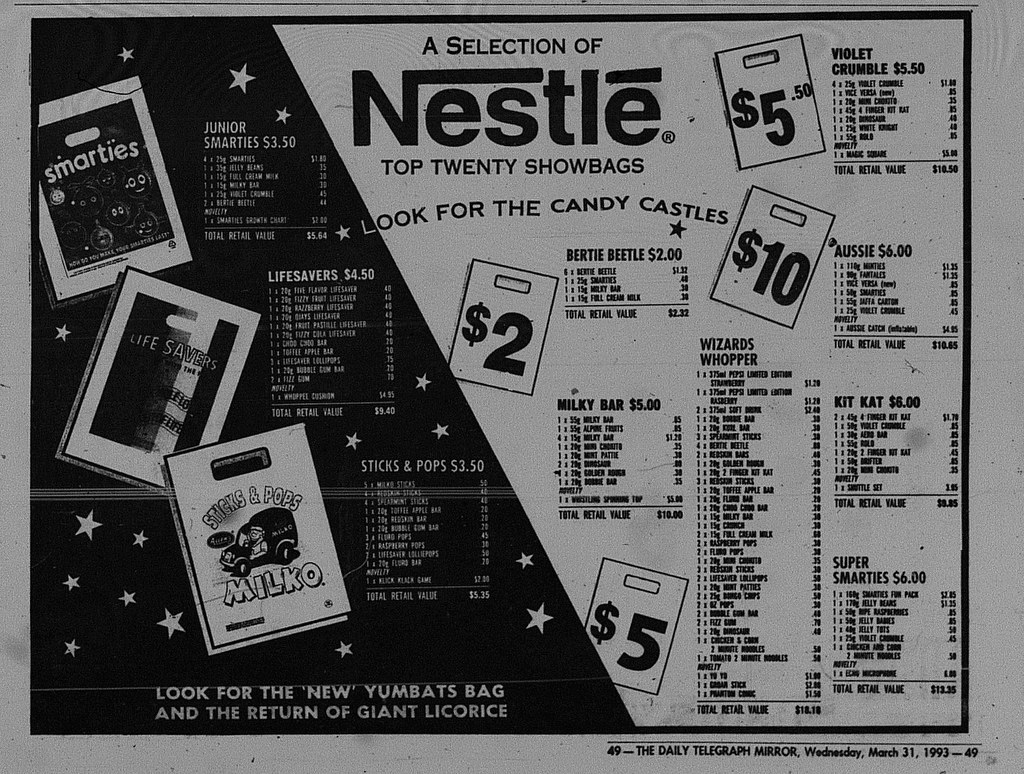 Triple M offered a simple duffle bag. Note that they offered a can of TAB Clear, when the clear cola drinks were a fad. This bag would not rate against the offerings that Triple M will have this year. 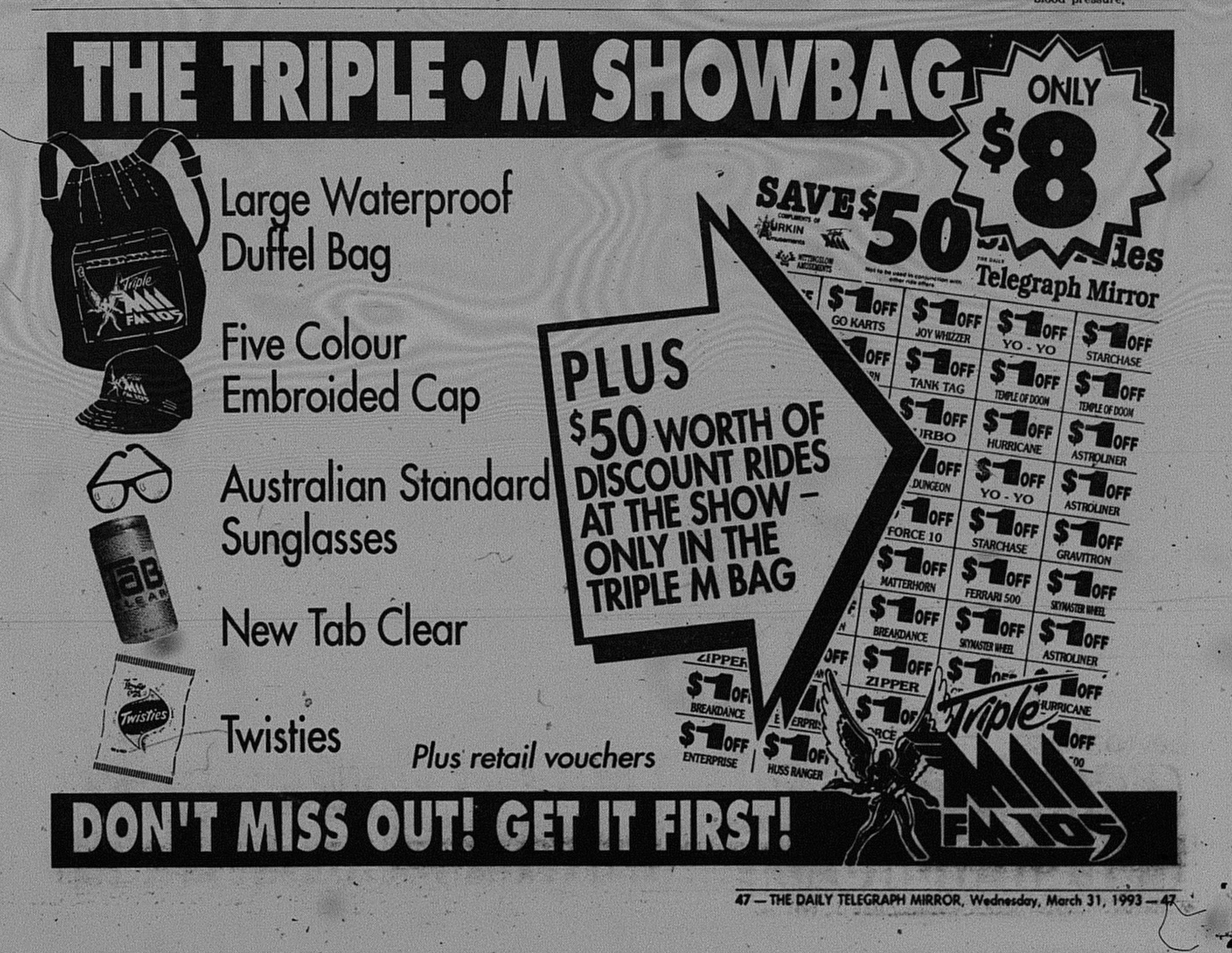 Coca Cola offered it all for just $7.90. Interestingly, they are not selling one this year. Arch rivals Pepsi are following them too. 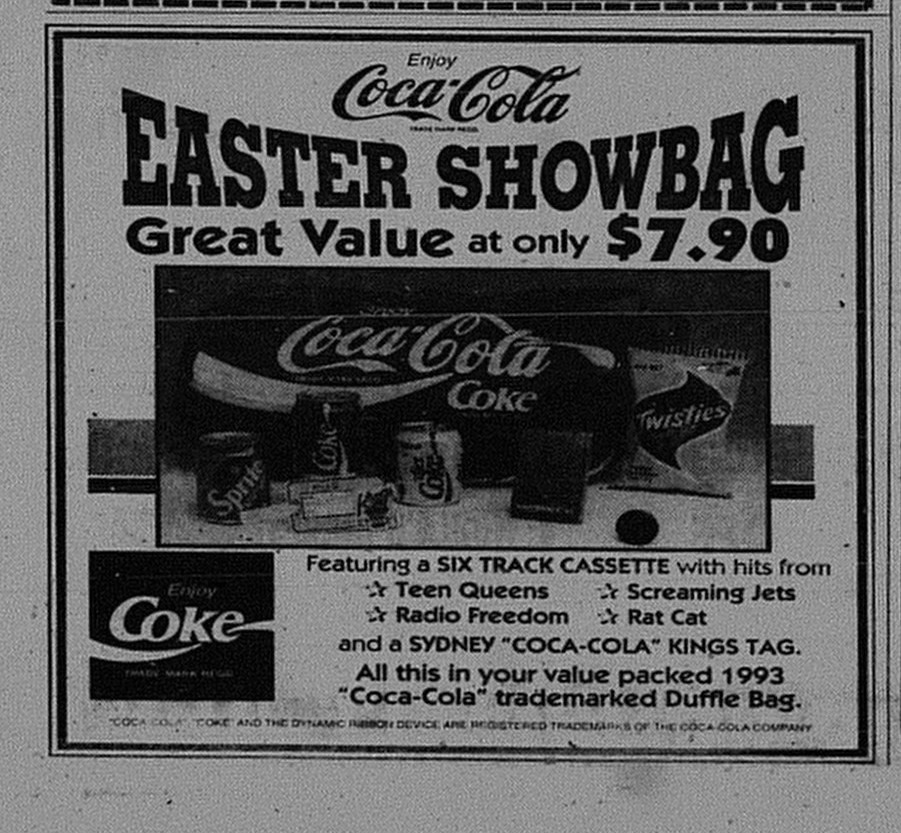 Finally, I have further material online at my Royal Easter Show archives album on Flickr.

Back in 2016, I shared one advertisement for Westminster Homes from 1972. Here is another one from the same period; promoting homes for sale at South Wentworthville and Moorebank. 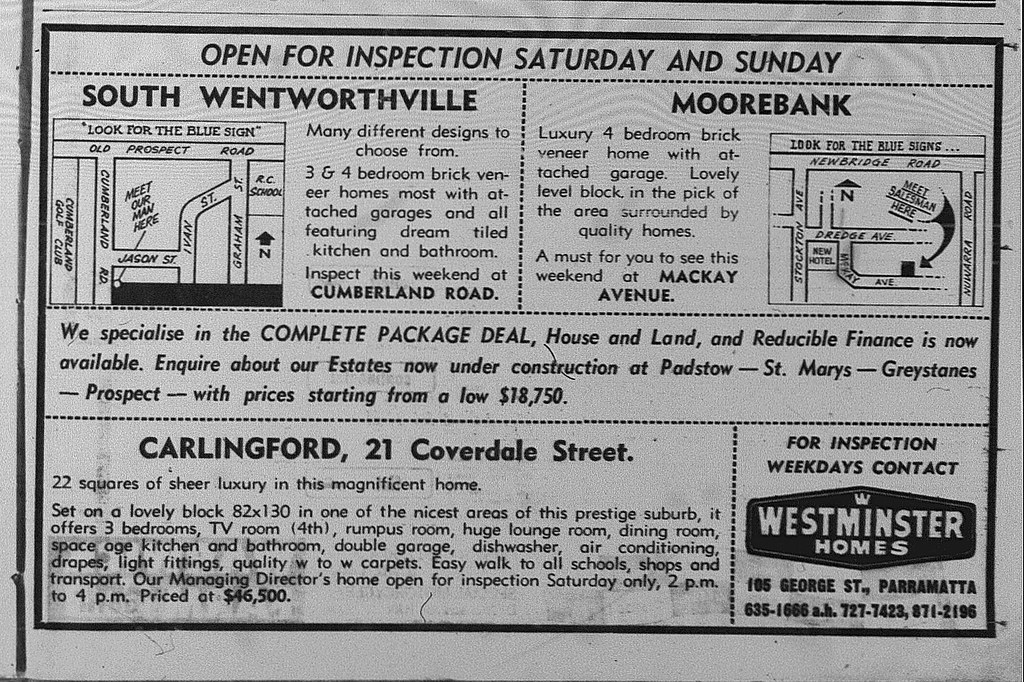 1968: The conception of Sydney Tower 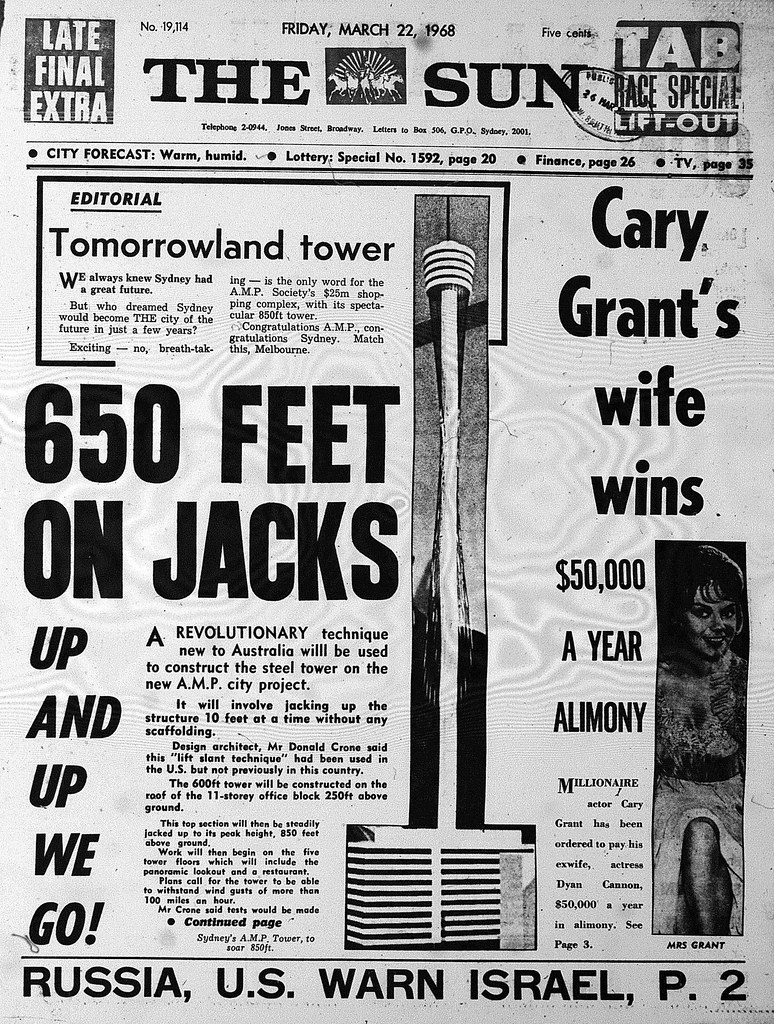 Sydney Tower has been the defining structure on the city skyline since its completion in 1981. Getting there was a timely process.

The story of Sydney Tower dates back to 1968, when plans were unveiled by the AMP Society to build an 850 foot (259 metre) tower atop a new shopping centre and 15 level office building on a site bounded by Market, Pitt and Castlereagh Streets. The estimated cost was just $25 million. 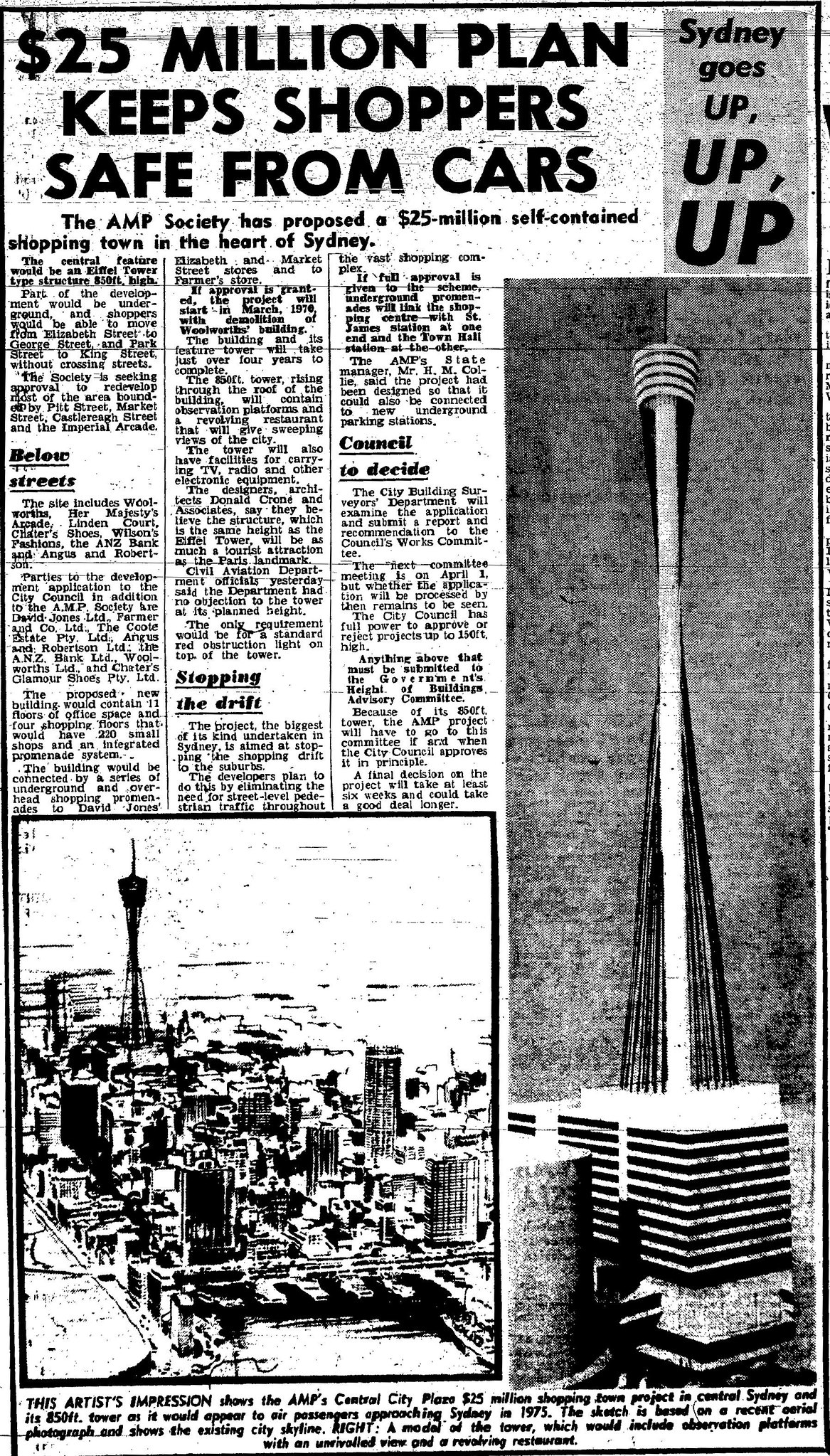 Sydney Tower is designed by architect Donald Crone. It is believed that the design (in fact the entire development) was conceived at a dinner party where he drew a sketch of the tower on a napkin. 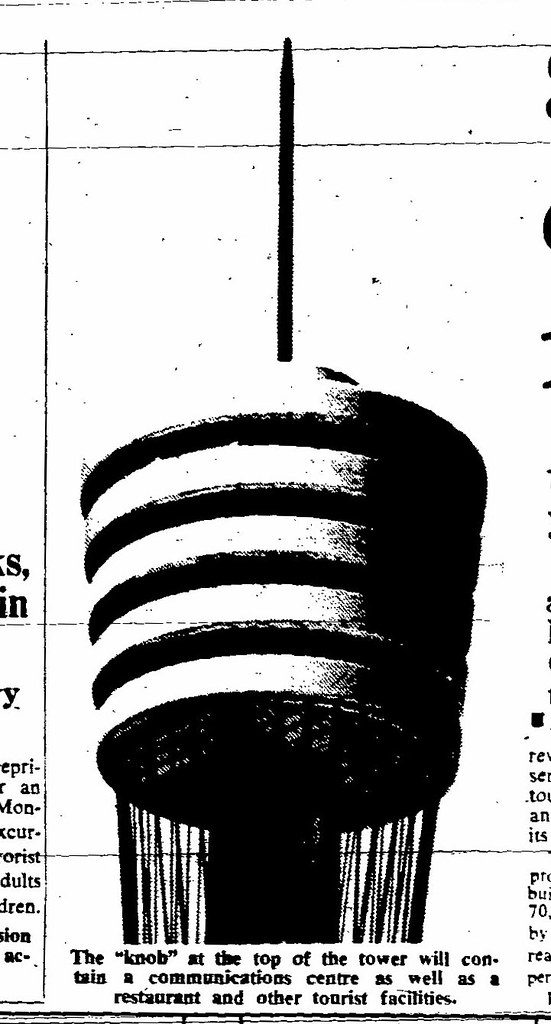 The initial proposal contained a four level turret with an observation deck and revolving restaurants as we see today. However the section above for the plant room did not feature with an antenna rising from a flat roof.

Within a year, the design was evolving into what would become the final product with the section for the plant room included with a small antenna rising above it. You will notice this from a 1969 article in The Sydney Morning Herald, where a scale model of the tower was being subject to wind tests. 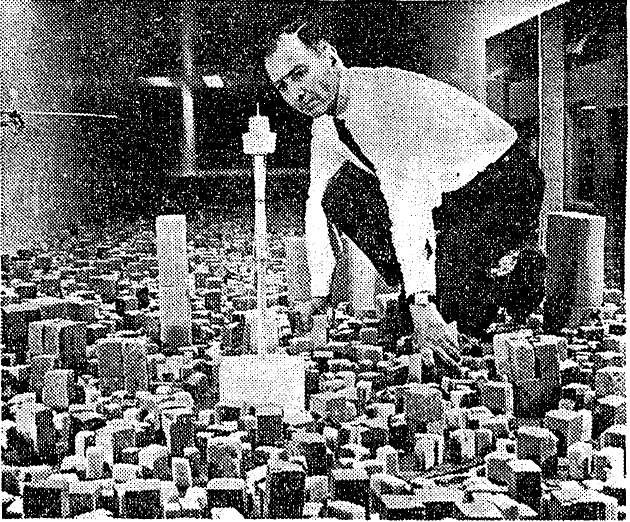 A more detailed render had been published a few weeks earlier in The Sun Herald on June 29, 1969.

They were aiming for the tower to be completed by 1974, but completion was pushed back further and further.

Further refinements led to the final design that we see today, especially with the plant room, which also contains water tanks to be used in the event of a fire but also to minimise swaying.

The final height would be 309 metres, fifty metres higher than the earlier schemes.

In a fortnight, we will look at its opening in 1981, and the impact it has had on the city skyline.
Posted by Fabian Amuso at 00:00 No comments:

Property Advert of the Week: The Quadrant, Milsons Point (1999)

In 1999, luxury apartments were on sale at The Quadrant in Milsons Point. 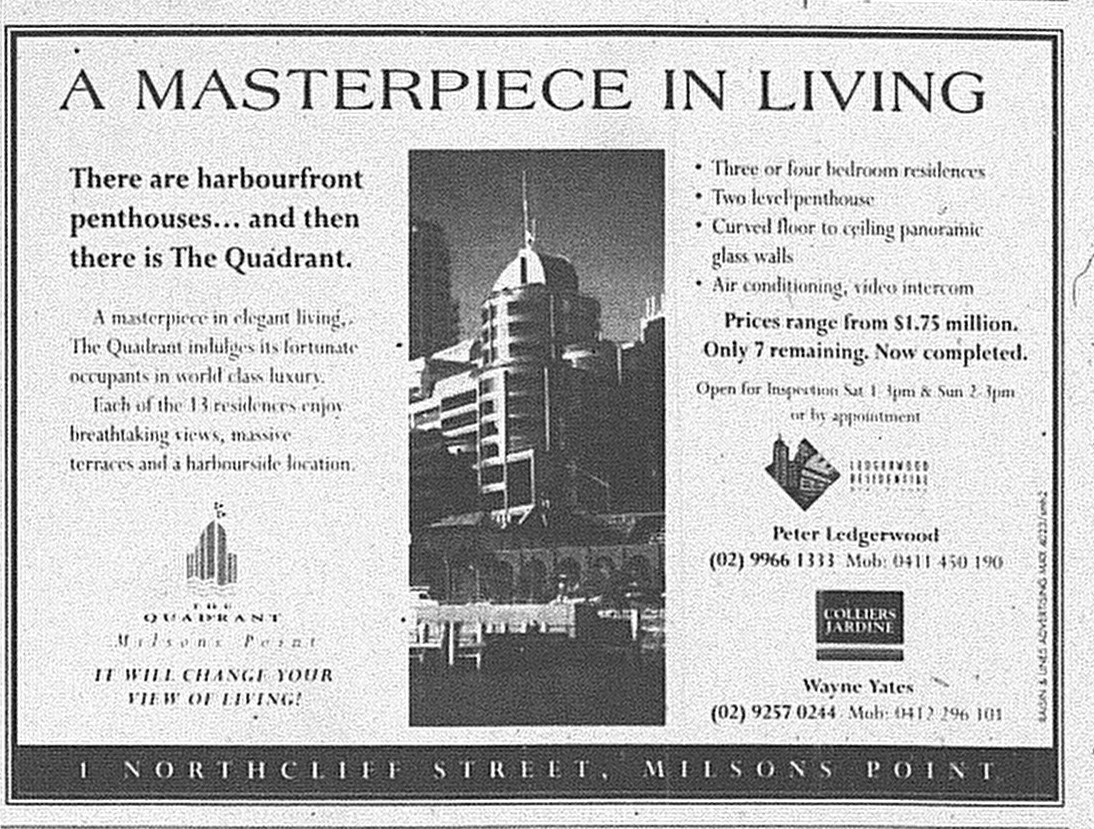 
The tallest building in North Sydney is the Northpoint Tower, located at 100 Miller Street. It was completed in 1977. A 34 level office tower rises over a retail podium to a height of 131 metres.

Initial plans to build on the site date back to 1970, when a rectangular tower was proposed in line with Miller Street only. The final design would see the building bent in half to make it align with either the Pacific Highway (western half) or Miller Street (eastern half).

A public square at ground level along with a retail complex would complete the development.

Renovations occurred in 1997 and a major redevelopment of the site commenced in 2016. Apart from a new retail centre, there will also be the addition of the Vibe Hotel; to be built at the rear of the office tower.

Redevelopment works also include recladding the exterior of the tower and refurbishing office space.

Recent photos of work are shown below. All photographs were taken by the Author. 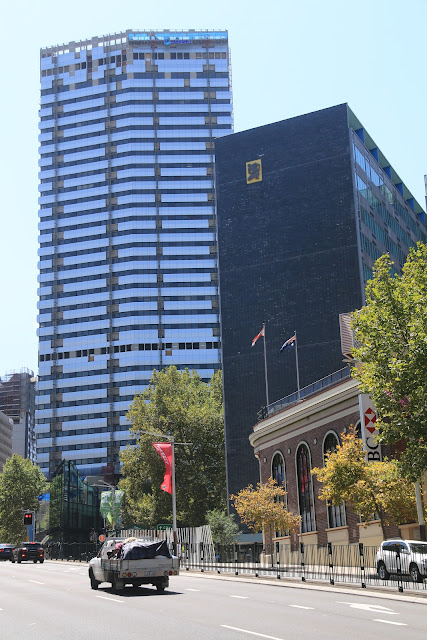 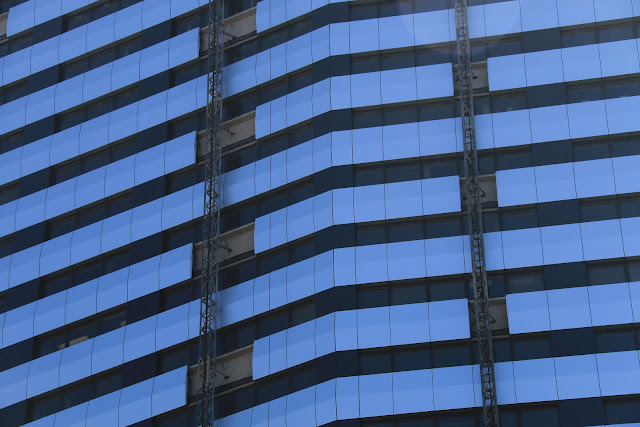 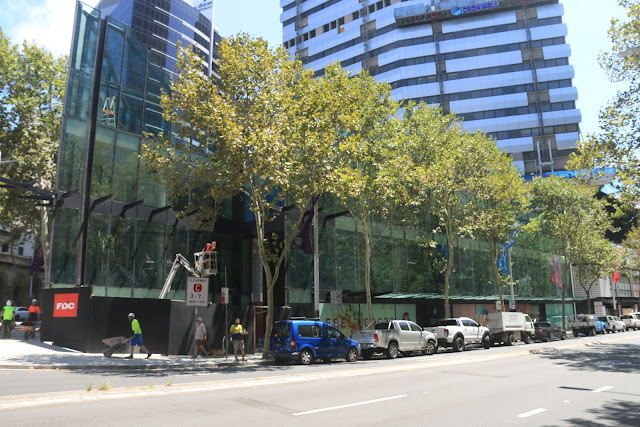 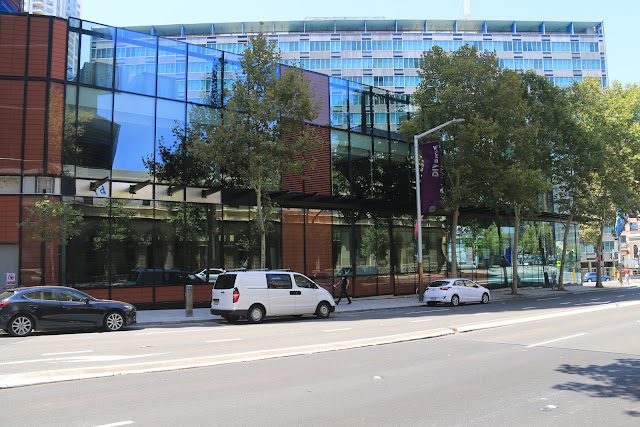 Property Advert of the Week: 1A Robert Street, Artarmon (1996) 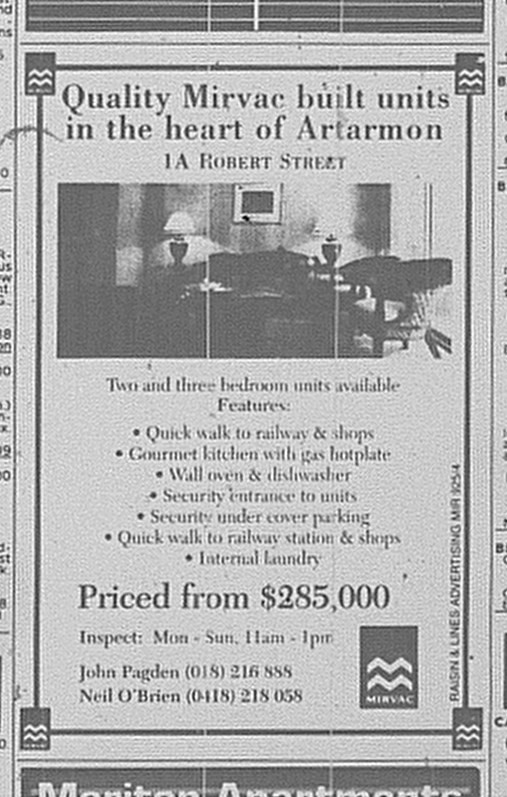