Below is an advertisement for the Diseno complex at Edgecliff dating from 1999. 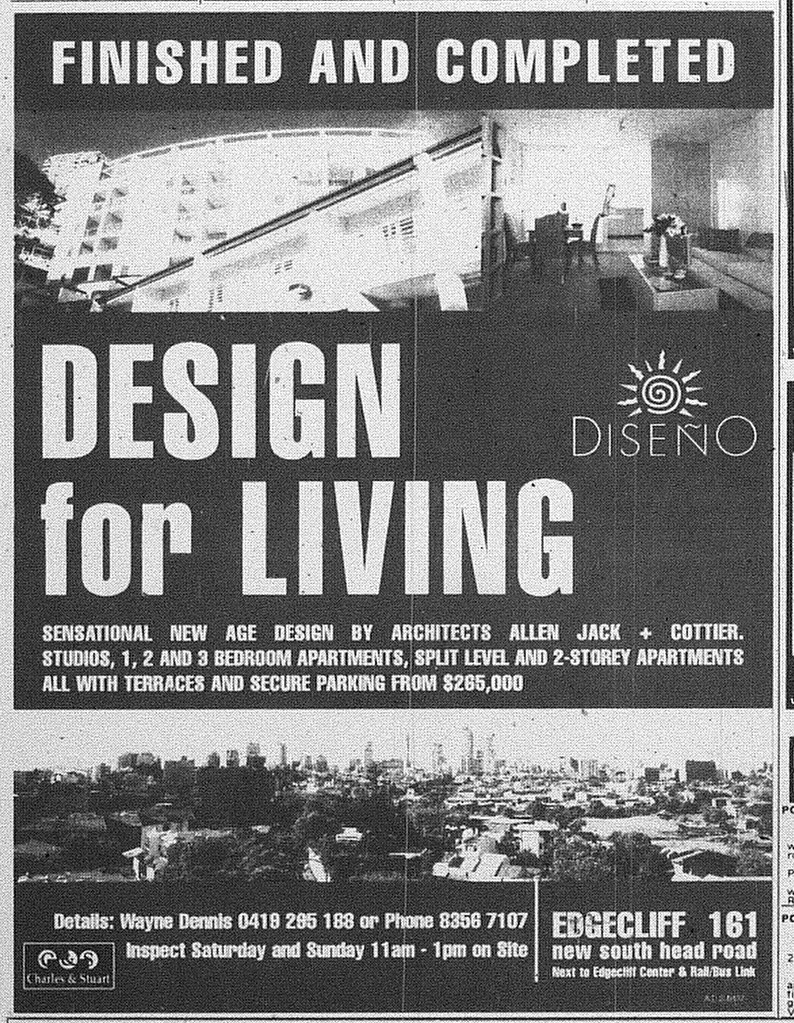 Below is an article from The Daily Telegraph that was published in October 1972, when Sydney City Council announced that Mainline Constructions had won the tender to construct Town Hall House and St Andrews House.

Town Hall House would become the new home of Sydney City Council in 1977 while St Andrews House would be home to St Andrews Cathedral School and offices for the Anglican Church. Any firm can rent space within the building.

Property Advert of the Week: Dee Why (Cromer) Land Release (1968)

Below is a 1968 newspaper advertisement from The Sun for blocks of land at Cromer which were advertised as being in Dee Why. 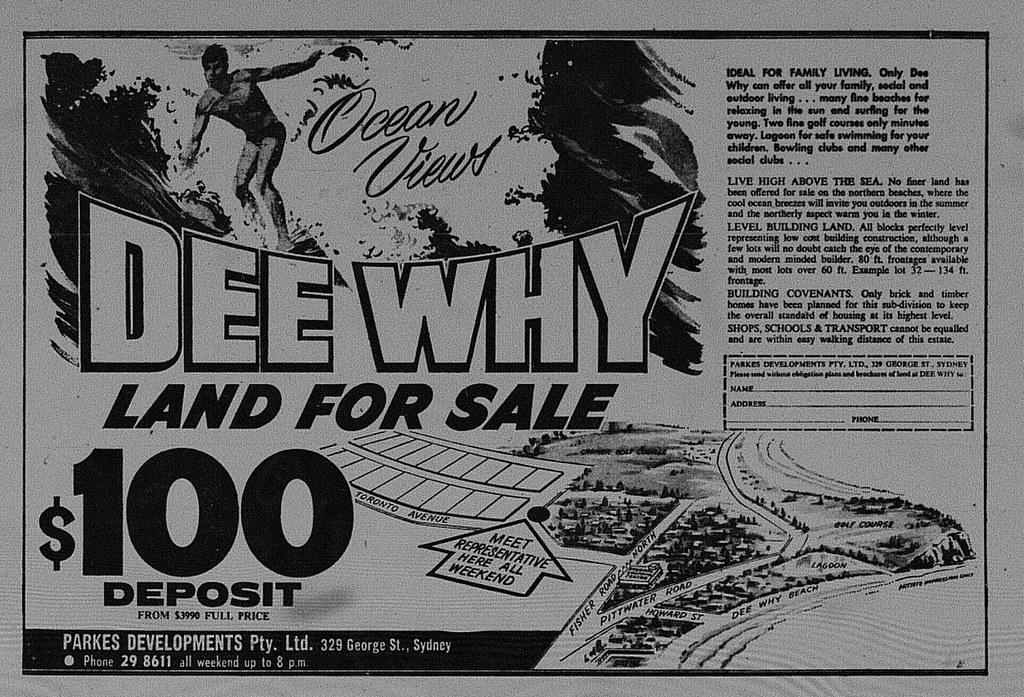 1988: Plan to sell off the Sydney Football Stadium

This week, NSW will head off to the polls to either re-elect the Liberal Government of Gladys Berejiklian or elect the Labor Party led by Michael Daley to power after eight years in Opposition.

One of the big issues in the election this year is the upgrades and redevelopment of our city stadiums - Parramatta Stadium (opening in April), Sydney Football Stadium and ANZ Stadium.

The most controversial is the Sydney Football Stadium which is at present under demolition. A number of groups have opposed its demolition altogether while others object to the State Government funding redevelopment of the stadium that the Private sector or the SCG Trust pay for construction.

In 1988 when the stadium was opened, there was drama and it was to do with money. Taxpayers had to contribute $39 million to fund construction of the $63 million stadium despite assurances from the Wran Government in 1985 that no taxpayer funds be allocated to the subject.


The Sydney Morning Herald reported in its editorial of May 5, 1988 that the SCG Trust never explained the need to spend $63 million on the stadium. The question has been raised again in 2019 by critics who oppose redevelopment.

But in 1988, the concern was that the Sydney Football Stadium would never be properly utilised and would only host a few major games that year of rugby league and appears to suggest that it was not being well utilised by other sports including Rugby Union and Soccer.

As for major events, we fast forward three decades and in its final years in the current form, it was being well utilised by various sports. Who would think that every second weekend during the summer months, that there would be professional soccer games played at the stadium.

It also survived competition from Stadium Australia. It took away marquee events, but many fixtures continued to be played there because it provided initimacy for the fans attending. Compared to Stadium Australia, I have preferred the Sydney Football Stadium because I feel closer to the action not to mention the atmosphere.

Finally, it is noted that the State Government acknowledge that there cannot be a situation where not a public cent is spent on building public stadiums.

The Labor Party if elected on Saturday will provide the SCG Trust with a loan to fund the rebuilding of the Sydney Football Stadium. However, the SCG Trust is a department of the NSW State Government. How can they repay the State back unless they hike ticket prices?

No matter who wins the election on Saturday, public funds will be used to rebuild the Sydney Football Stadium.

This week's property advertisement is from 1999 promoting townhouses and apartments at Cape Cabarita in Cabarita starting from $530 000. 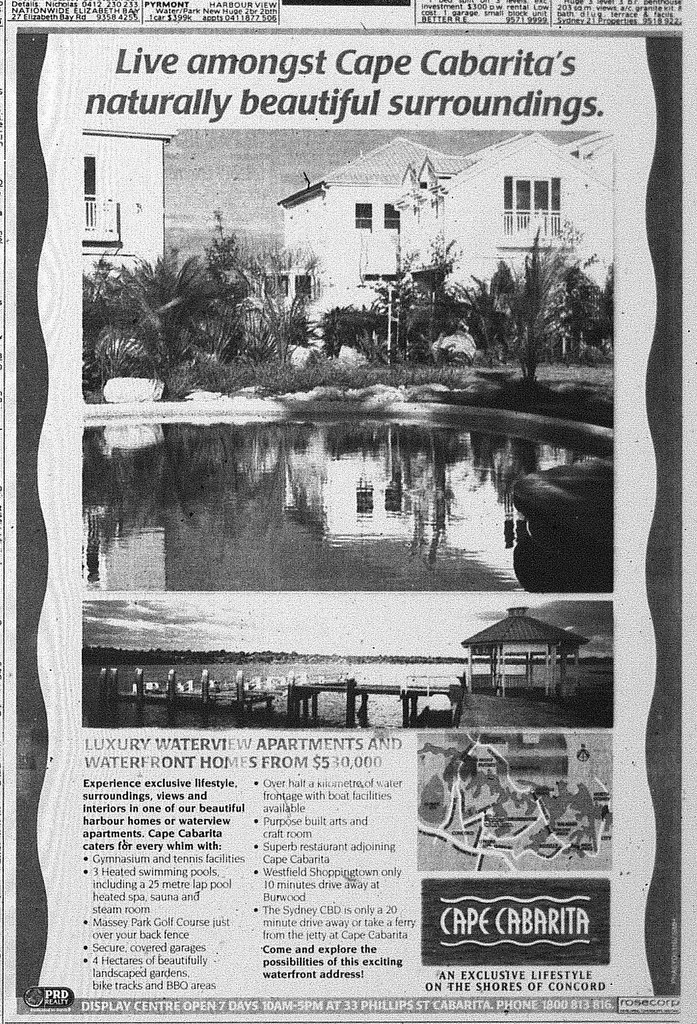 Looking around central Sydney at present, one might notice that a number of major office buildings have disappeared including: 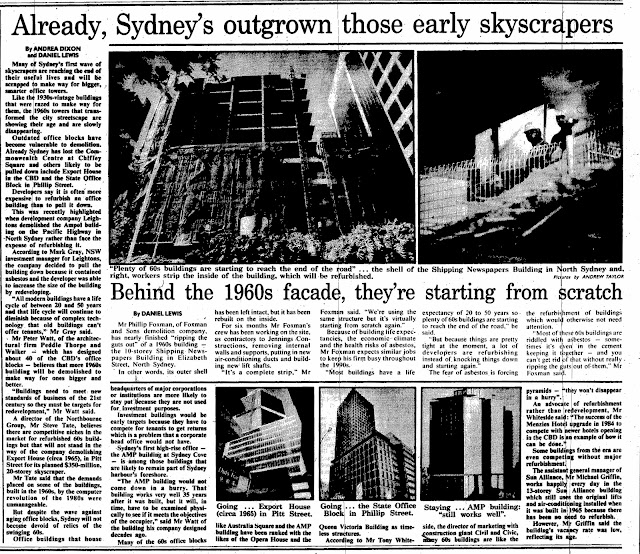 Others like the AMP Centre at Circular Quay are being gutted and redeveloped into modern structures to accommodate the changing workspaces of the 21st century.

Some of the recent demolitions include buildings from the 1980s, particularly in George and Pitt Streets near Circular Quay.

People may question why some buildings have been pulled down after just twenty or thirty years of service.

It has come down to two factors just like today:


Tenants today also want buildings with larger and more flexible floor plates which allow for space to easily be reorganised according to the needs of the tenant.

At the end of the day, buildings do have a life cycle just like us humans. They are bound to die at some point in the future.

Fortunately, buildings of historical significance like the AMP Building will always have their place in Sydney and for some, the prestige of being in such a building is merely enough for them.

Posted by Fabian Amuso at 17:20 No comments:

Today, Camden is one of the fastest growing regions in Sydney, but in 1968, you could have 10 000 square feet of land. 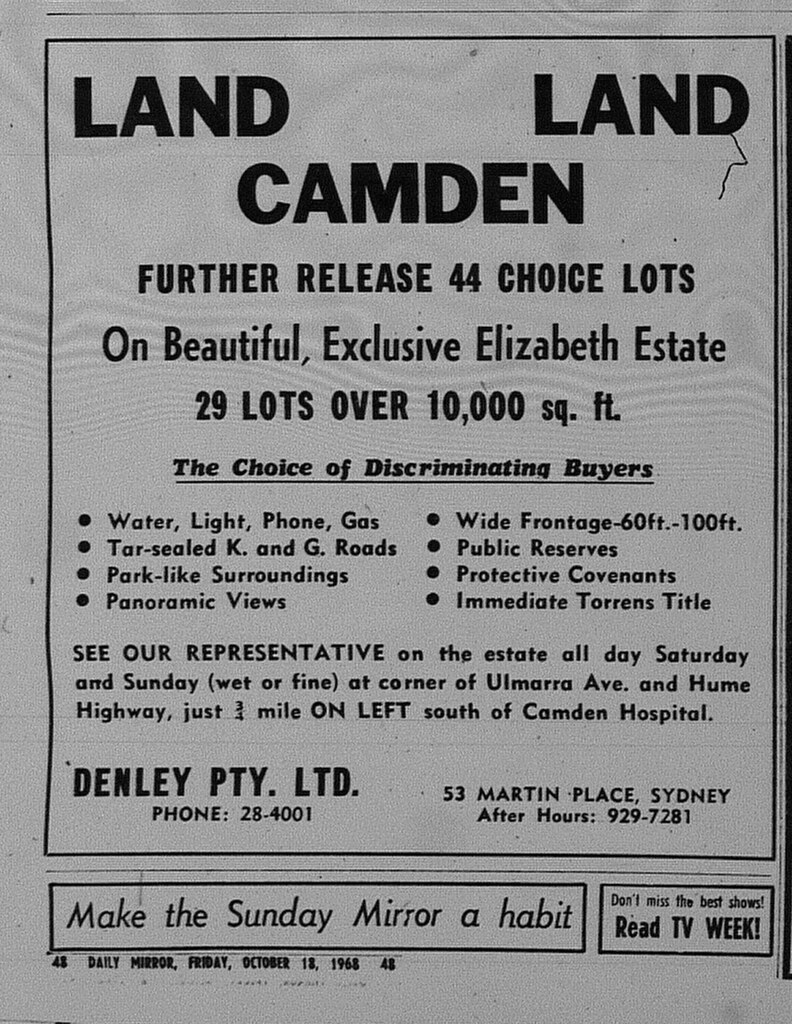 Below is a 2001 article from The Daily Telegraph, focusing on Bob Carr's proposal to improve the design of apartment blocks in Sydney.

The article does not mention it, but it is believed that Bob Carr was unimpressed with the architectural designs of highrise residential blocks in his electorate of Maroubra and wanted standards raised.

Some residential buildings were even designed by non-architects. 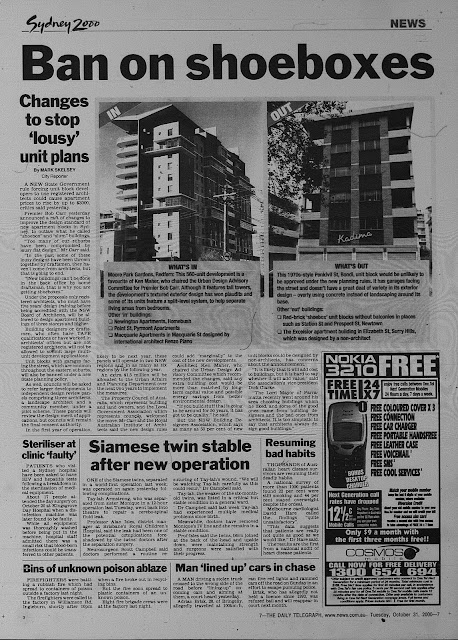 This led to the passing of legislation in 2002. Under Section 65 of the State Environmental Planning Policy - Design Quality of Residential Flat Development. It meant that a registered architect could only design a residential building.

As we move towards two decades since the legislation has passed, and the results to the average person would appear to be mixed. Broadly speaking, there has been a general improvement in the terms of the architectural design of residential buildings in Sydney, particularly in the Sydney CBD and inner suburbs. As for suburban Sydney, it varies. In some suburbs, I have noticed that highrise buildings built in the past decade architecturally are more appealing than those built in the 2000s. I look at Rockdale for instance and have noticed an increase in the architectural standard of some of the unit blocks.

Even with this law, there are unit blocks that architecturally are not appealing to the eye, and tend to be in the outer suburbs, where the focus is on profit over quality. I think councils in suburbs further out may need to work on improving standards for architectural design.

There were critics that argue that architectural quality means higher house prices. I will concede that this is true, but sometimes we need to consider this cost in terms of providing quality streetscapes in which the buildings will shape, along with making a home as livable as it can be.

Below is a 1971 advertisement promoting a land release at Castle Hill by Parkes Sales. 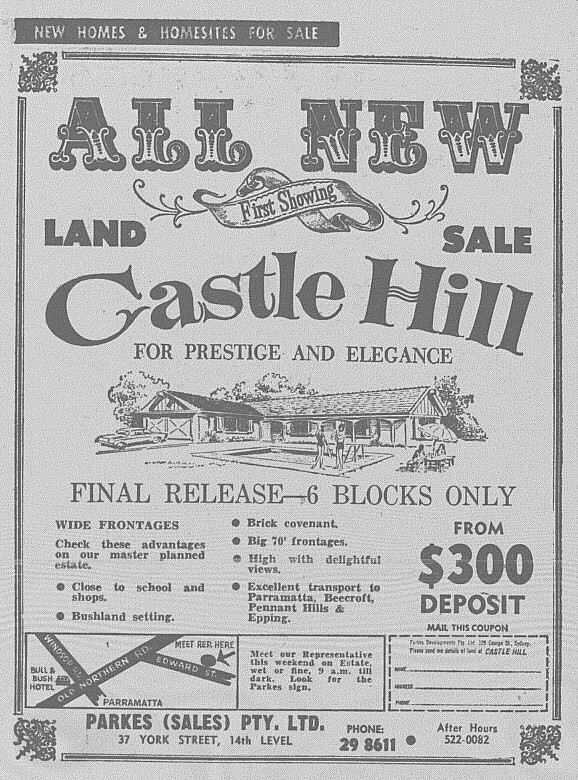 Posted by Fabian Amuso at 13:38 No comments: