Here is a classic advertisement as promoting homes for sale by southern Sydney real estate agent - C.A. Sanders & Co from 1971.

The PAN-AM flight from Los Angeles, via Honolulu and Nadi arrived approximately 6:30pm, more than nine and a half hours late due to mechanical problems with the jet. Its arrival would inaugurate PAN-AM's twice-weekly 747 services between Sydney and Los Angeles. 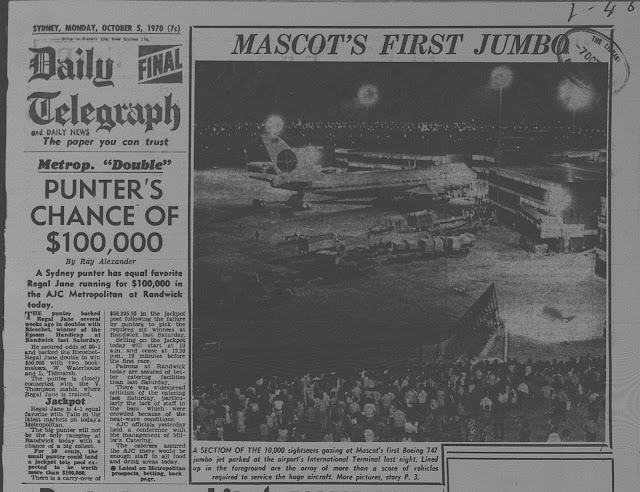 Below is coverage of the arrival as seen by The Daily Telegraph on October 5, 1970. 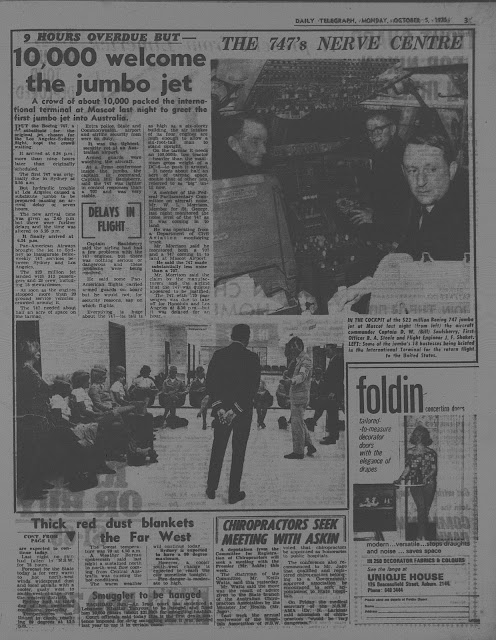 Qantas commenced 747 services the following year. The Boeing 747 jet like the Boeing 707's that came into operation just a decade earlier transformed the way that Sydneysiders travel around the world. While the objective by airlines like PAN-AM was to reduce congestion at airports, it had cost benefits for airlines. It could carry up to twice the number of passengers that a 707 could carry. The cost of flying would fall opening up more opportunities for Sydneysiders to see the world, within their budgets.

Earlier in 1970, the International Terminal opened in its current location on the western side of the airport, and the design of the terminal accommodated for the new jets. It also led to the extension of the North-South Runway out into Botany Bay.

Aircraft noise was already a huge issue in suburbs surrounding the airport, especially in Rockdale. The 747's were noted as being much quieter than 707's. However, the problem would not disappear but worsen as the airport grew in the decades to come and air traffic increased. Up to eighty planes land per hour at Sydney Airport today.
Posted by Fabian Amuso at 00:00 No comments:

Here is one from Long Industries Homes (now Long Homes) from 1973 featuring the Australiana series which was on display at Toongabbie. 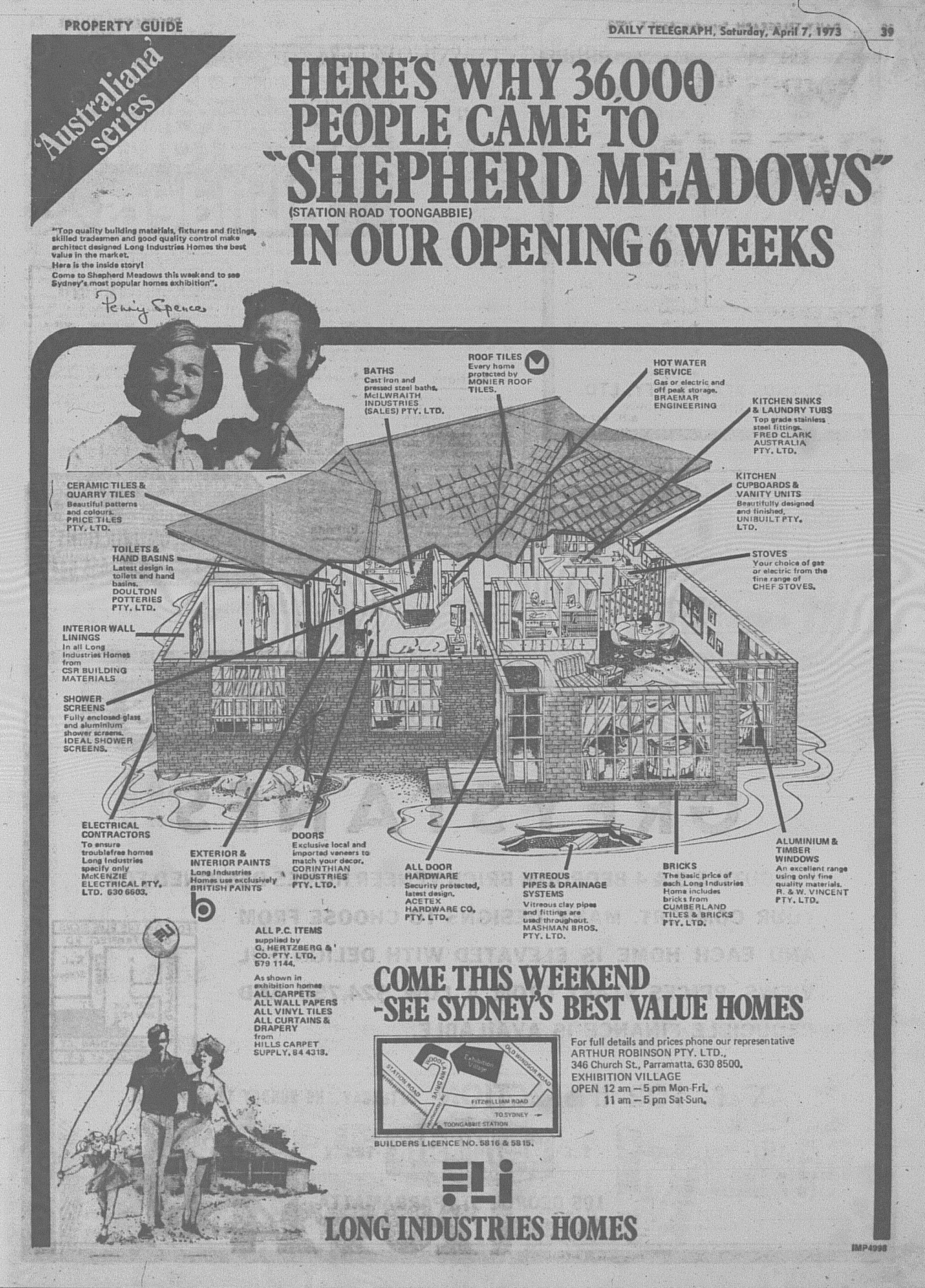 1997: Plans for the Eastern Distributor are unveiled 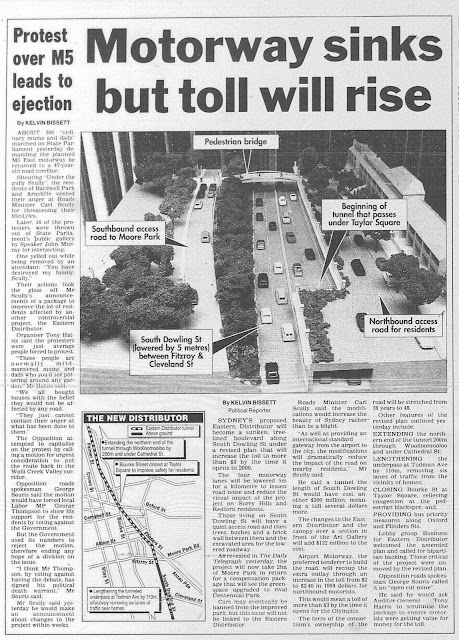 Did you know that it is 20 years ago this month that plans for the Eastern Distributor that we see today were unveiled?

While there had been calls for the entire road to be placed underground, attempts were made to make it appear more environmentally sensitive. This included sinking sections of the motorway under South Dowling Street and the landbridge connecting The Domain with the Royal Botanical Gardens.

The opening was slated for 2000 (The Daily Telegraph) but was opened ahead of schedule in December 1999, sticking to the promised $3 toll. 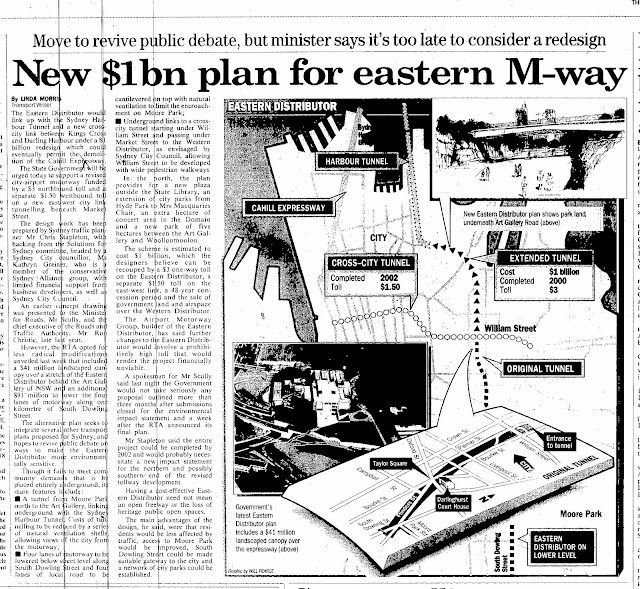 Large week, it was split level townhouses that one could buy in 1998 on the north shore if you wanted compact without losing the bigness of a home, but if you wanted to be close to the city, you could choose a "super large" apartment in the Peninsula Apartment Complex at Pyrmont. 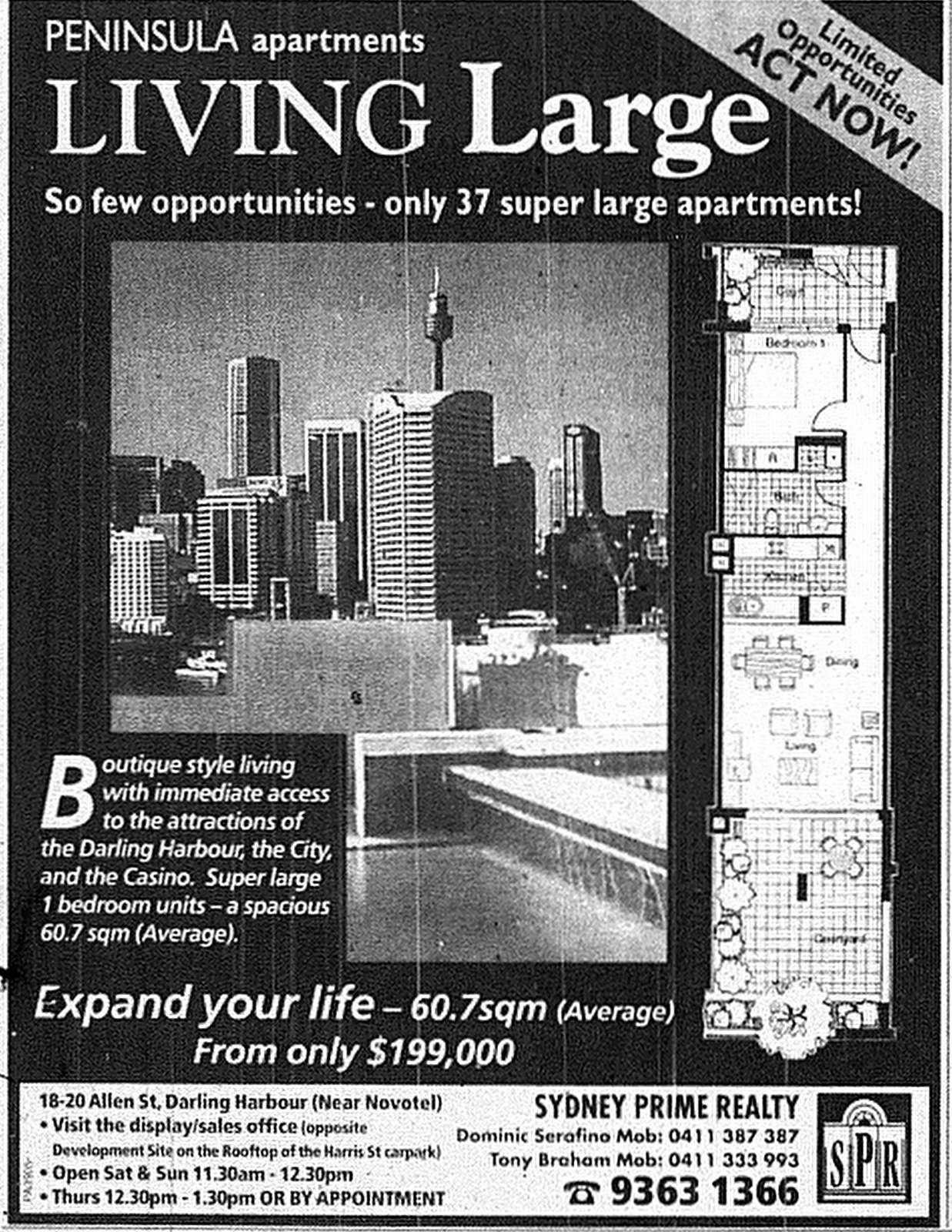 On Saturday, the Royal Easter Show was officially opened by the Governor General of Australia - Sir Peter Cosgrove and is the pinnacle event of the show when the best of Australian agriculture is put on show with those assembled in the Main Arena treated to a spectacular procession. The Grand Parade has been held annually since 1907. In 1965, the Duke of Gloucester was on hand to officially open the show, making him the first member of the Royal Family to open a show since 1824. Here is a report from the April 15, 1965 edition The Daily Telegraph of the Official Opening. We are also treated a picture of the formations from the parade, one tradition that still holds to this very day. 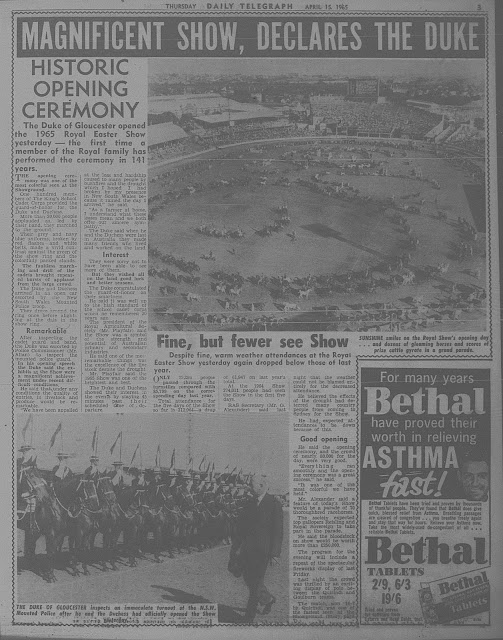 I hope you enjoyed last weeks insights into the 1992 Royal Easter Show, but I felt this article should also be shared from 1992. The recession was still biting hard on peoples pockets. It was being reported that more people were passing through the gates, but spent less once inside the gates. 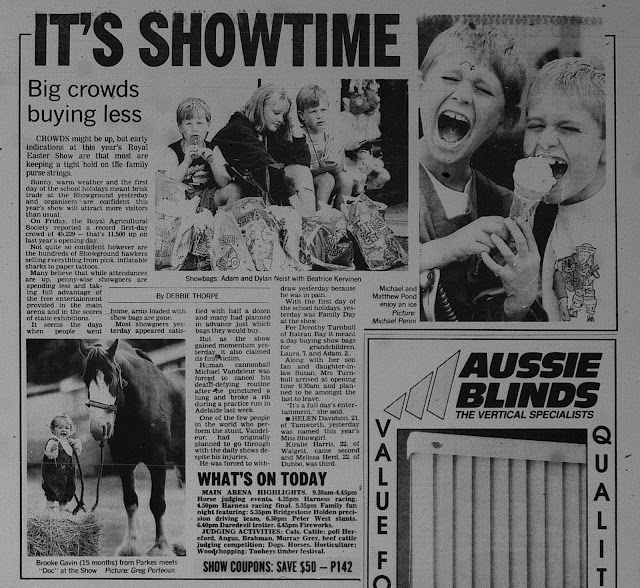 But on a positive, people did their homework before buying their show bags. A very handy tip if you want to get bags with good stuff at a good price!!!

This week we head up to St Ives, where split level townhouses were on offer in 1998 at the Pemberley Grove complex in Shinfield Avenue. 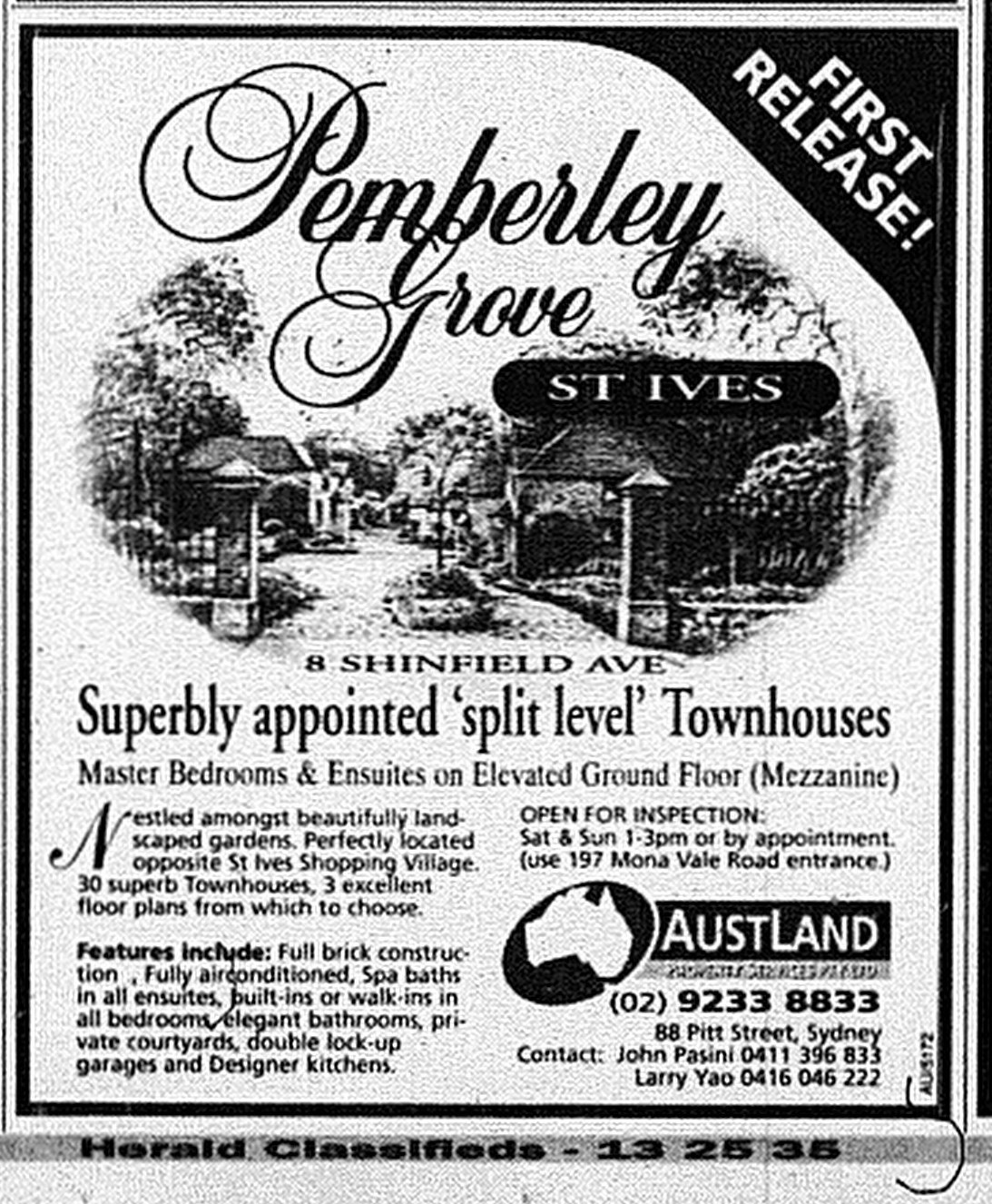 Here is a Google Earth link to view the complex from the street. 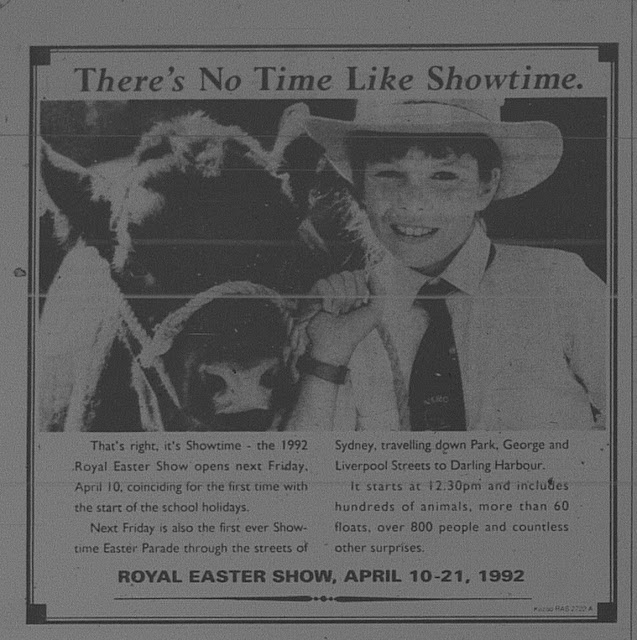 The 2017 Royal Easter Show commences on Thursday at the Sydney Showgrounds at Sydney Olympic Park.

Let's look back at the highlights from the 1992 Royal Easter Show.

It was the sixth last show held at Moore Park (1997 was its final year) as planning continued towards the eventual relocation of the showgrounds. Newspapers provided very valuable coverage of the events from the Easter Show including the preview guides. 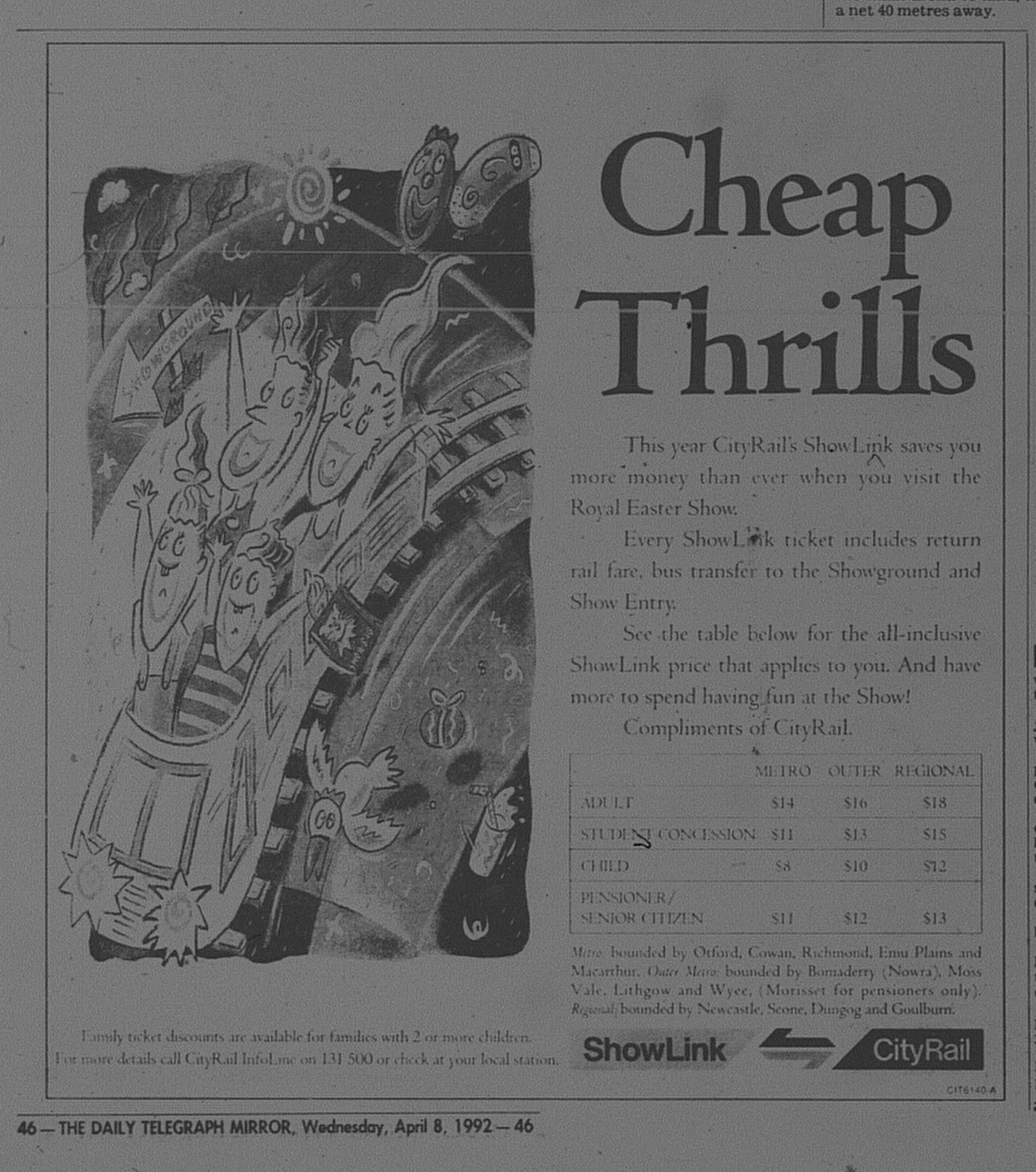 Family discounts applied if there was a second child etc if attending as a family. They went in for free!!!

Showlink Tickets for the first time allowed show goers to use either (or a combination of) buses, trains and ferries to travel to and from the show. Paying just an extra dollar for public transport provided an incentive for people to leave the car at home. I remember my parents driving to the show that year and the car parks in Moore Park were packed to the brim as usual.

It may appear to be more affordable to the average person, but remember you could purchase either a show entry ticket only or the all in one ticket. Today each person must pay a flat admission charge which includes public transport to and from the show on all modes.

This year, an adult will be charged $41.50 for Easter Show admission (up $1 from 2016) but is lower if booked online. Purchase your ticket before Wednesday and you will pay just $37.

In 2017, there are 380 bags available (up from 300+ last year), and all viewable on the Easter Show website. The choices can be overwhelming today, but in 1992, many options were there. Showbags in 2017 will sell for as high as $30. Bertie Beetle was and still is $2 though you can choose from several other Bertie Beetle Bags that retail for up to $15. There are two show bag advertisements that I've included for you to get a feel of what was available. 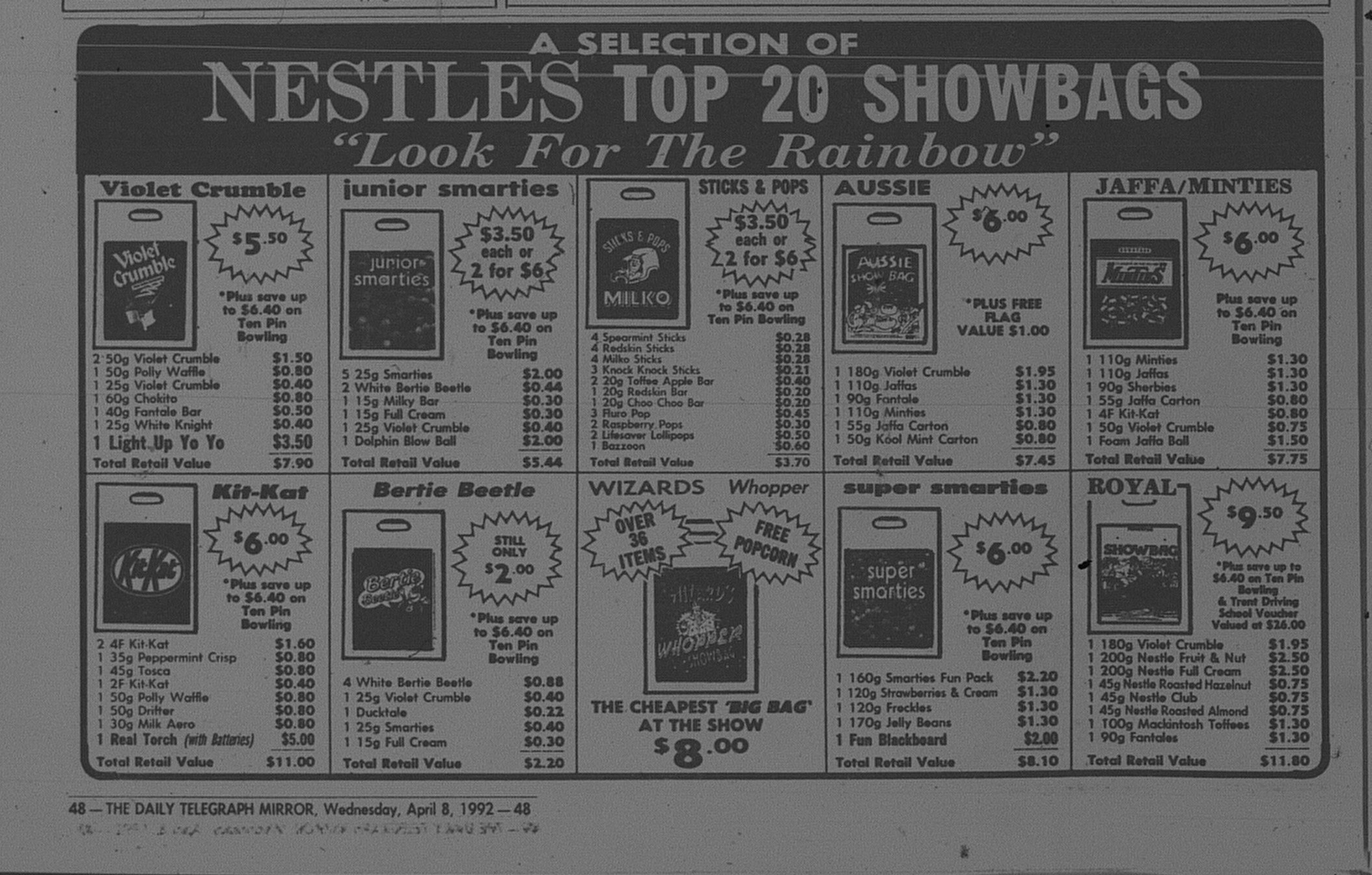 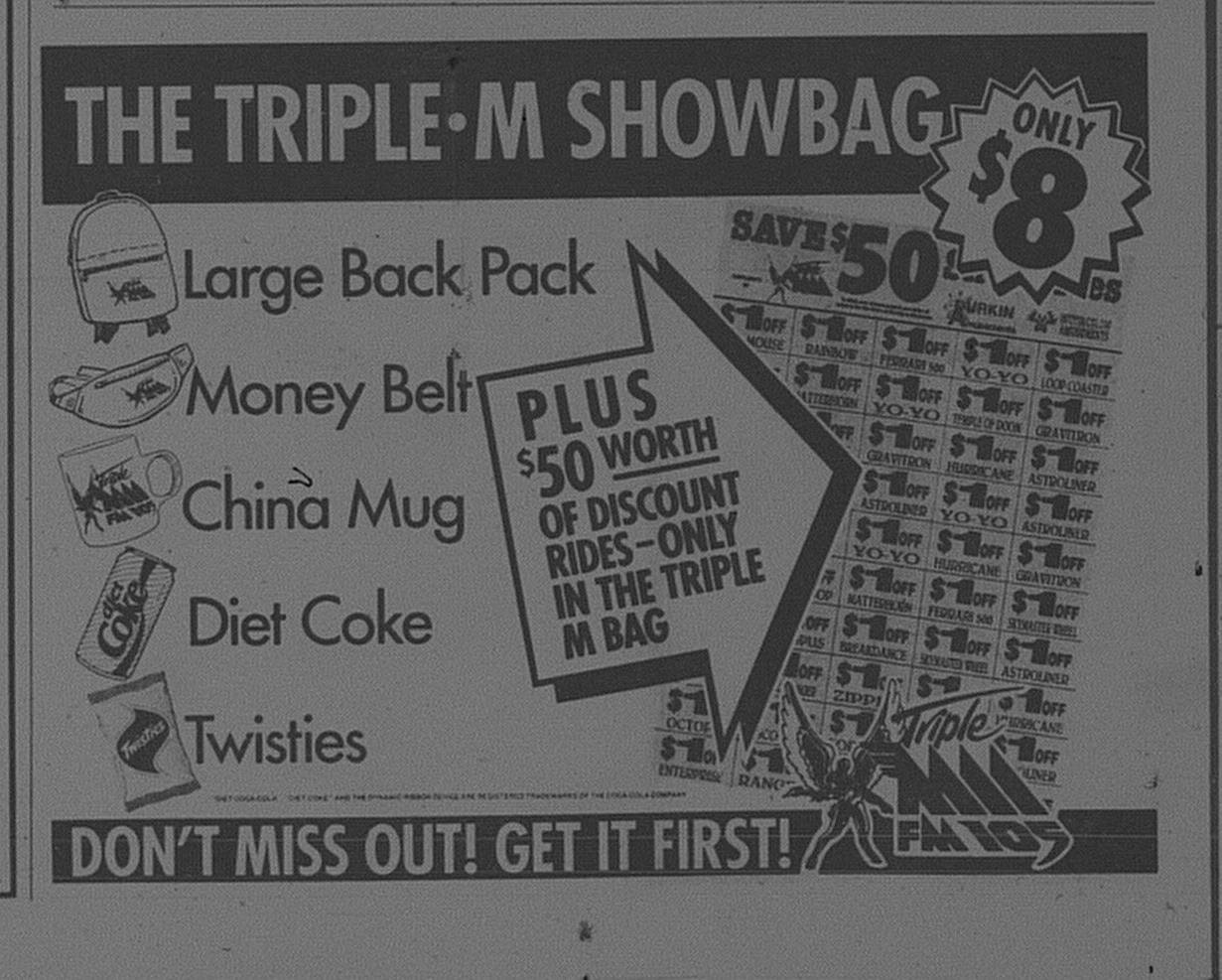 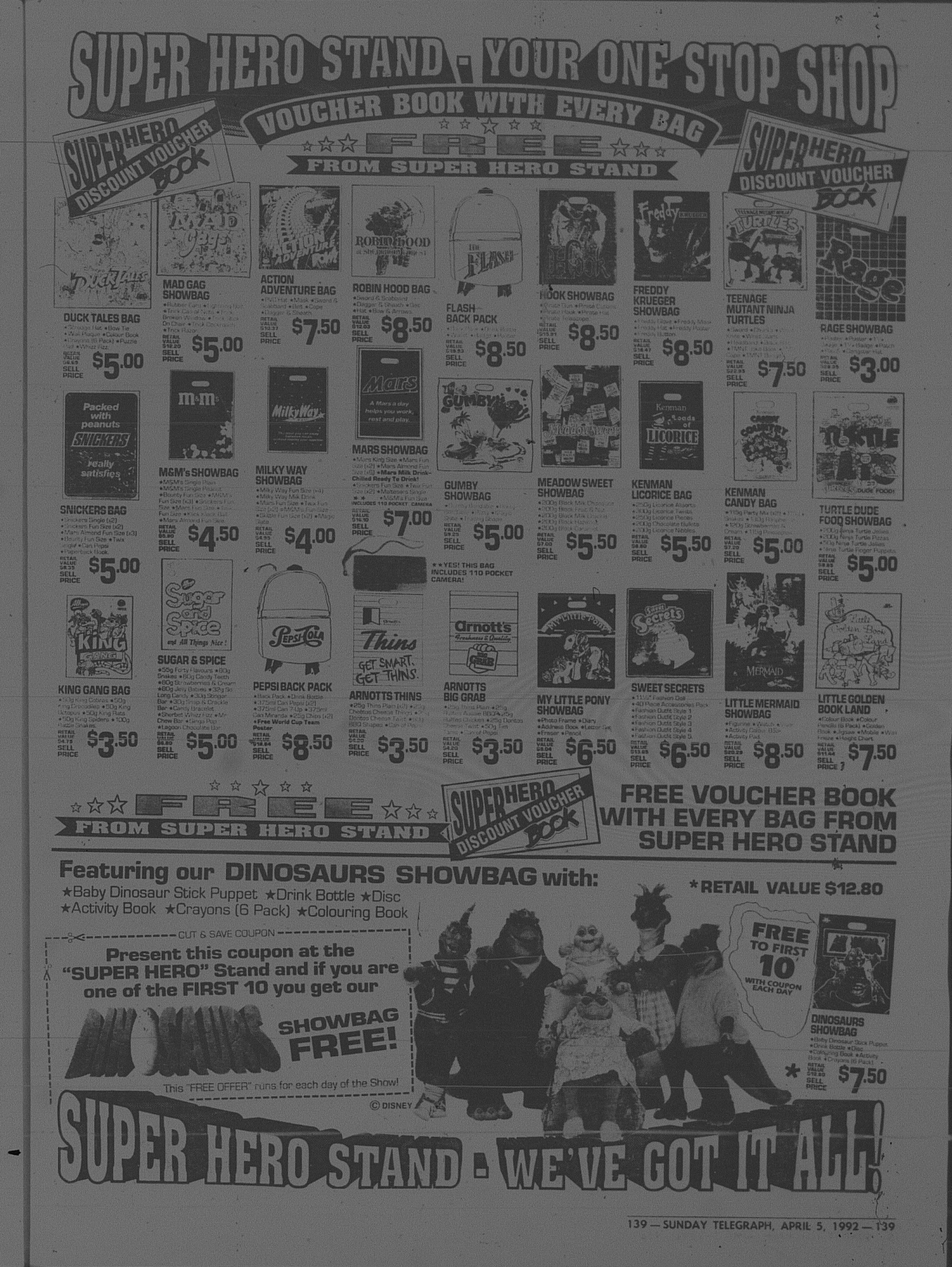 
According to a report in The Sydney Morning Herald on April 22, 1992
As a bonus, I have a map of the showgrounds for the 1992 Royal Easter Show which was published in The Daily Telegraph Mirror in their preview guide on April 8. 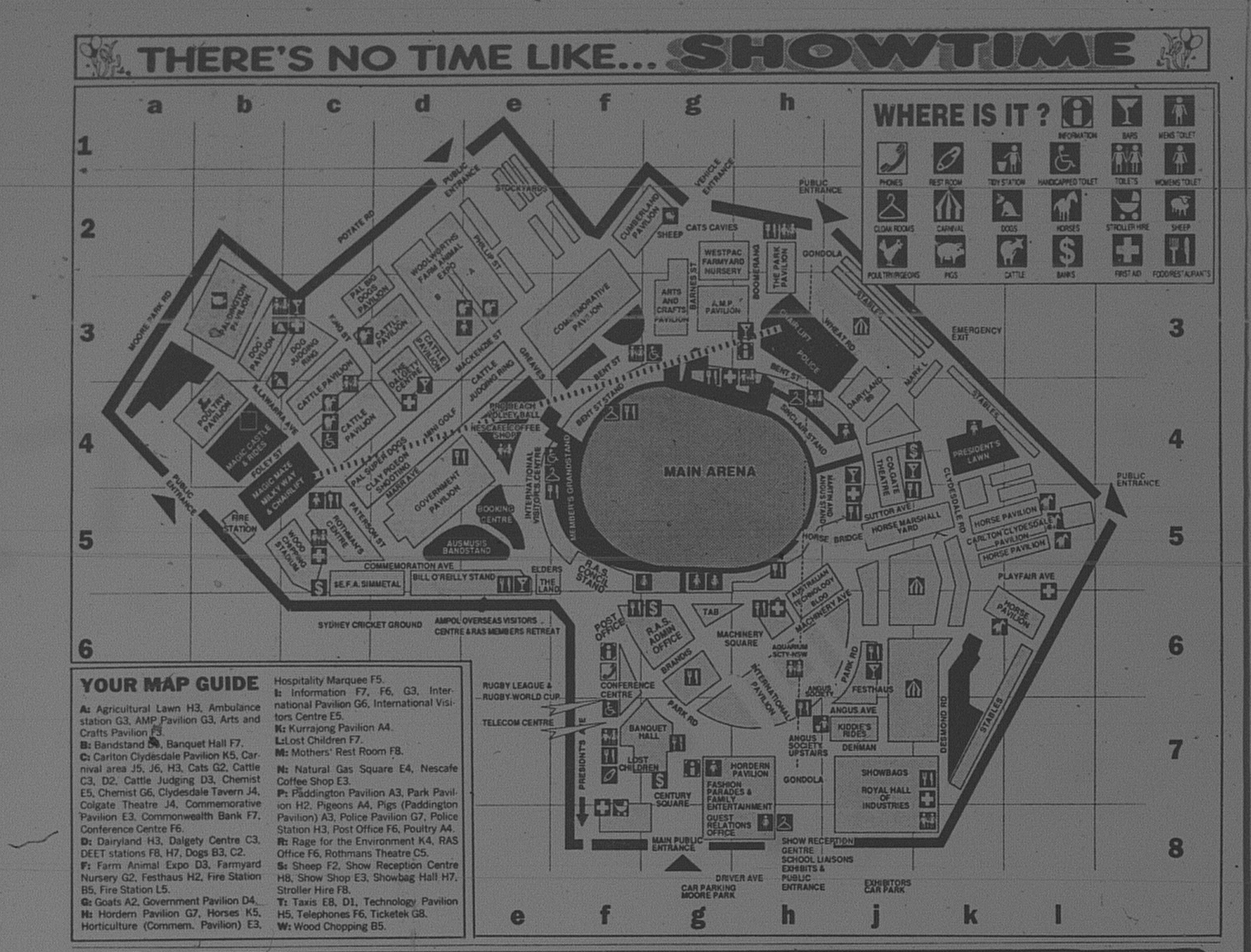 This week we head over to Newtown where a one bedroom apartment in the Presido complex would cost you just $198 000 in 1999.