Some might remember in the early 1970s when architect Harry Seidler called for the demolition of the Queen Victoria Building in George Street and that a multi-storey carpark replace the building.

Demolishing the QVB was an idea for more than a decade. In the late 1950's Sydney City Council wanted the building demolished for a public square with an underground carpark modeled on public squares in San Francisco and Los Angeles.

One proposal called for York Street to be tunneled. 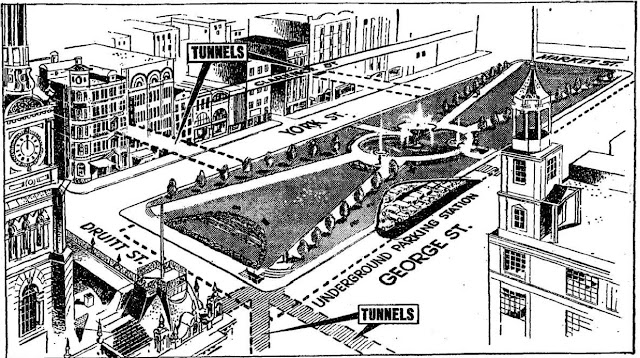 They felt that the building was just half the value of the site itself and not earning revenue for the council, who were the landholders.  They felt the public square and carpark would earn more revenue.

The question will be asked - What if it became reality?


We should be grateful that one of finest buildings in Sydney from the Victorian era is still with us today. The decision to convert the building into a shopping centre has paid off massive dividends for Sydney. It is a much-loved destination for shopping in central Sydney and the most famous retail complex of all. It is a meeting place for people too. One can dine at a cafe and restaurant and watch the world go by.

Posted by Fabian Amuso at 13:55 No comments:

This week, I share another advertisement courtesy of Meriton Apartments. It is for Parkview Towers at Pyrmont dated from 1995. 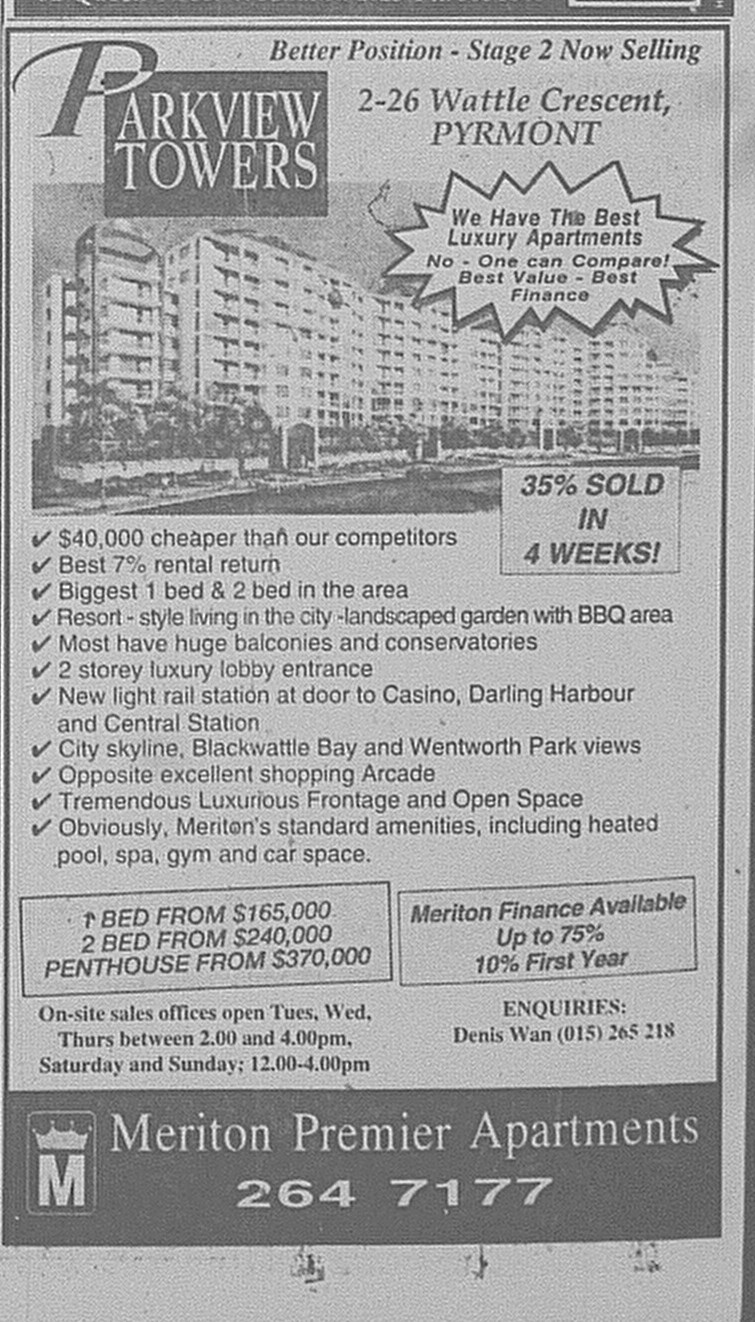 1970: The birth of Martin Place as a Pedestrian Mall

Martin Place is Sydney's most loved pedestrian mall which expands the entire stretch of the street. Achieving this feat was not an overnight process, but took time. 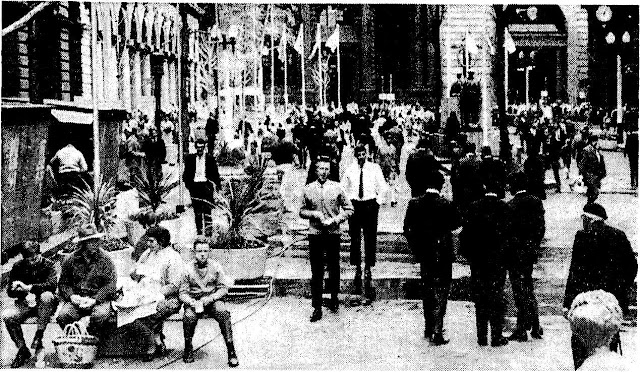 On September 1 1970, Martin Place between George Street and Pitt Street was closed to vehicular traffic for a four-month trial to determine whether or not it should become a Pedestrian Mall - Martin Plaza. It was officially opened by Lord Mayor - Alderman Emmet McDermott 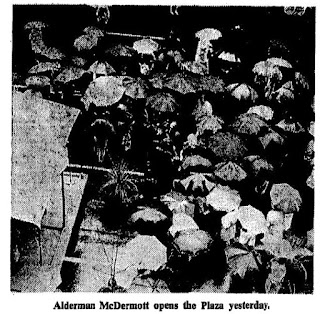 The trial led to calls for it to become reality as the editorial from The Daily Telegraph from October 29, 1970 (below) shows. Even the State Government was coming on side.

Fast forward to September 1, 1971 and Martin Place Plaza becomes a reality with the first stretch of Martin Plaza from George Street to Pitt Street closed off to traffic permanently. The offical opening of the plaza occured on September 10, 1971. 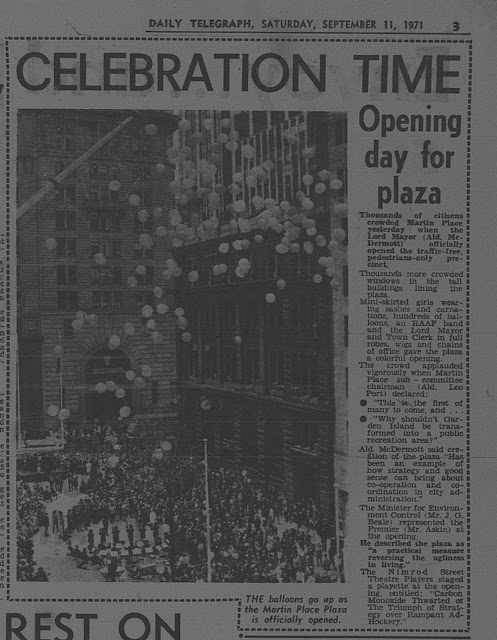 In 1972, Sydney City Council announced that it would convert over three years, the remainder of Martin Place into a Pedestrian Mall. In Stage 2 between Pitt Street and Castlereagh Street, there would be a sunken recreation area along with a cafe precinct. Construction began in late 1973. This was opened to the public on July 22, 1976.

The remainder of the conversion was timed to coincide with the completion of construction of Martin Place Railway Station, built as part of the Eastern Suburbs Railway Line. Those areas were opened to the public on May 7, 1979.

Property Advert of the Week: The Domain Apartments (1995)

During the mid 1990's, the former office block on St John Young Cresent was one of a number of ageing city office blocks that was converted into apartment use.

From my understanding, the office building was built back in the 1970's as part of plans to turn Woolloomooloo into an extension of the Sydney CBD, and was built before the rezoning was axed. Two decades later, Wooloomooloo had actually turned from what had been seen as a "working class slum" into a desirable address.

With the fact that highrise was not allowed in the area opened up a great opportunity for a residential developer to earn a good return by selling premium apartments. The never to be built out views were enough. Also the decision of the ANZ Bank to move out of the building also pressed the case for residential conversion. 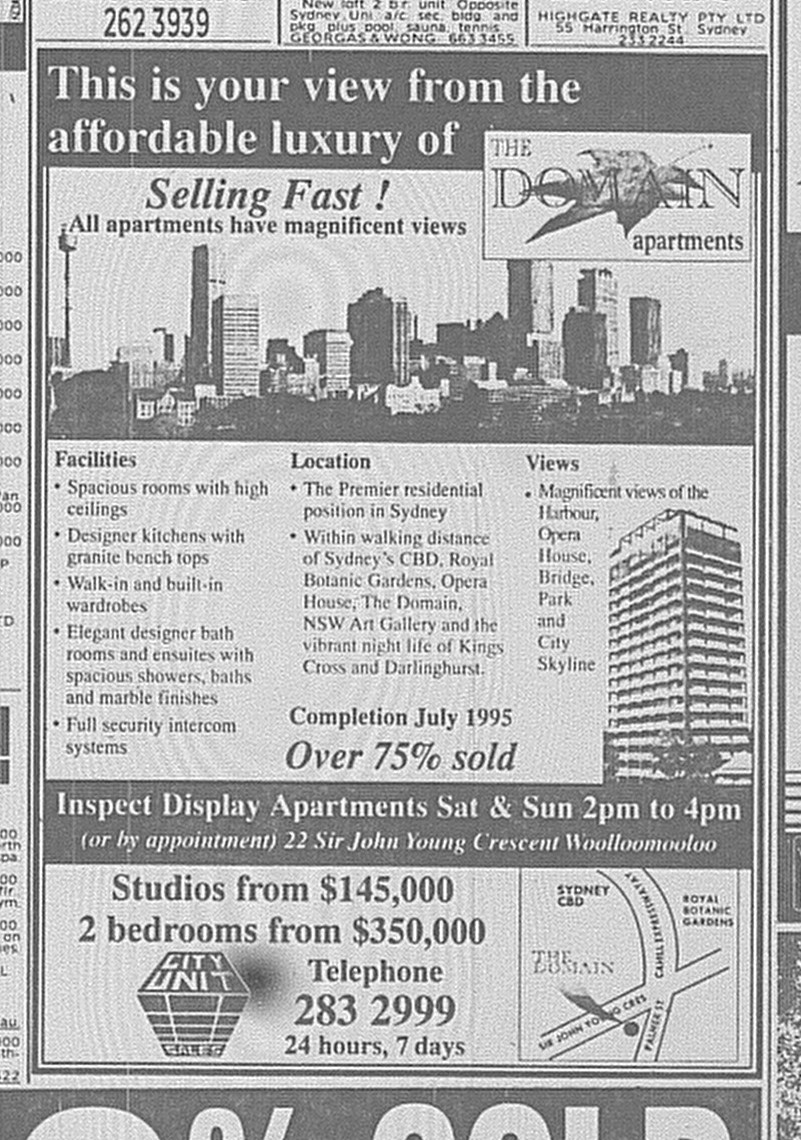 Manly's famous Harbour Pool had served the people of Sydney well since 1931, but in May 1974 it fell victim to the 'Sygna' Storm.

The bathing closure was located to the west of Manly Wharf and its walkway allowed a person to walk directly from the wharf to Marineland (Oceanworld). It even had a popular diving board and floating platforms for swimmers.

On the Weekend of May 25 and 26 1974, the harbour pool was battered by strong swells as the 'Sygna' Storm pummelled the NSW coast. The swells had surged through the heads causing chaos in harbourside suburbs.

The damage occurred during the evening of May 25 when the worst of the storm unleashed its fury. It was not until daylight that the magnitude of the damage became apparent. Page 1 of The Manly Daily on May 28 1974, summarises the carnage. 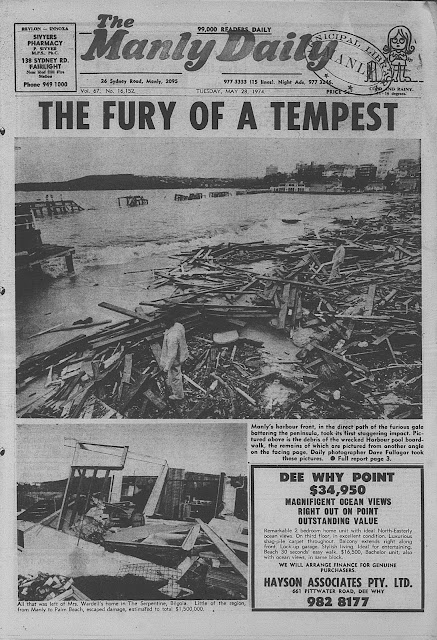 Much of the walkway had completely collapsed into Manly Cove and had washed up onto the beach. Whatever was left had buckled. Within weeks, the remnants had been demolished. Page 16 from the same edition of the paper published the famous photo of the buckled remains of the walkway. 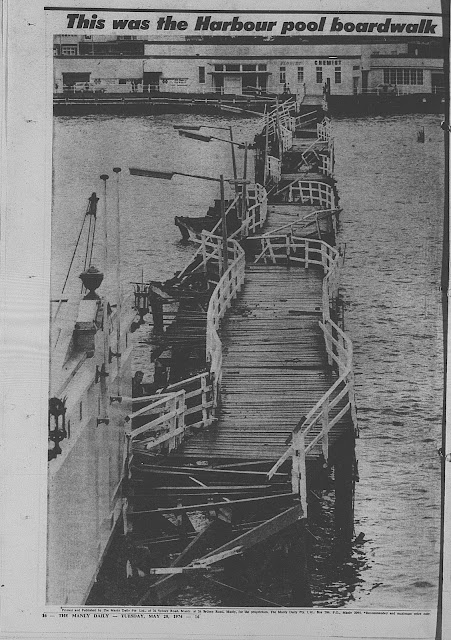 A netted swimming enclosure replaced the harbour pool which remains to this day.

There have been calls to rebuild the harbour pool such as in 1984 but was deemed to be "cost prohibitive". However in 2012, a group lodged their case for the rebuilding of the harbour pool, but with an eco-friendly twist that preserved the aquatic environment yet encouraged tourism.

This week, I share an advertisement from 1999 for the Moore Park Gardens complex at Redfern East.

1971: The forerunner to the Proposed Wynyard Pedestrian Network

Back in 2014, I shared an article in relation to the proposed double-decker pedestrian walkways for Wynyard in 1972.

I have found a clipping from the previous year that featured in The Sydney Morning Herald when the proposal was tabled with Sydney City Council which shows an even more extensive network of walkways than what has eventuated. 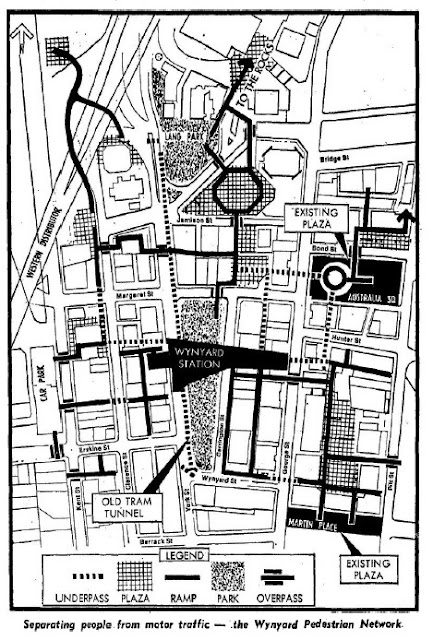 For instance, there would have been a second underground walkway under George Street near Martin Place. Australia Square was envisioned to be linked (it never did) through to Wynyard. Even the walkways under the Western Distributor were to form the network. Sadly the Western Distributor walkways were never connected. It was envisioned that the old tram tunnels under Wynyard would be a pedestrian underpass. As we know it is a parking station today. We also get a mention of a proposal to close Pitt Street from King to Park Streets between 12pm and 2pm. We did get a 24/7 pedestrian mall in Pitt Street (From King to Market Streets) in 1987.

This week, we head to Potts Point. In 1997, apartments were for sale in the Rockwall Gardens complex in Macleay Street. 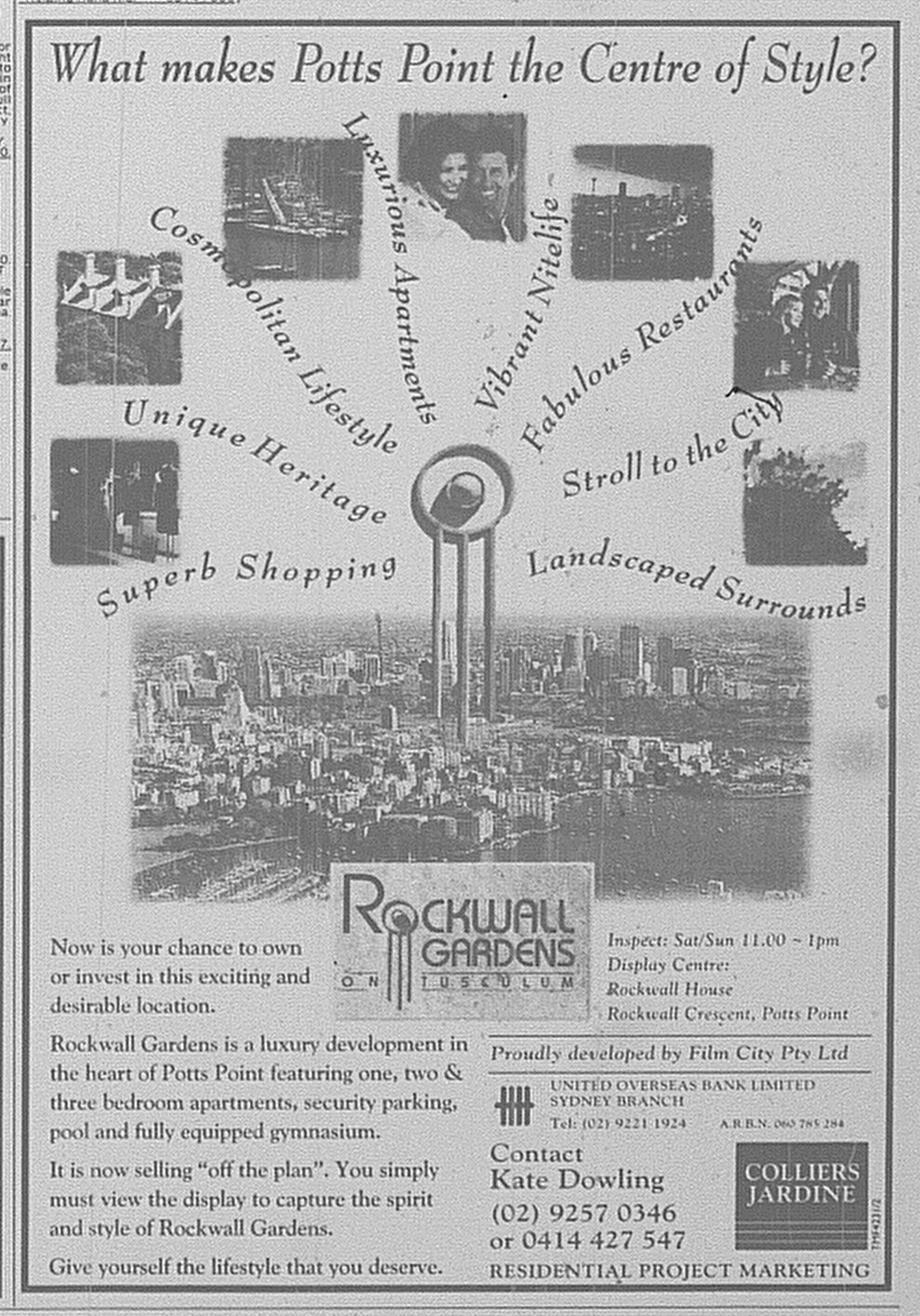