Property Advert of the Week: New Cottages at Mt Colah (1968)

An $895 deposit bought you a three bedroom home at Mt Colah in 1968, If you want to live there today, a similar home would cost you at least $1.1 million. That's an easy 100 fold increase in nearly fifty years.

Yesterday marked 24 years since Sydney was successful in its bid to host the "Best Ever" Olympic Games in 2000.

But how did we win it? I came across a good article by Michael Cameron that was published on Page 3 of The Daily Telegraph Mirror on September 25, 1993. He believes that Sydney's two-vote win was from the votes of Princess Anne (UK)and that of a British Delegate swayed the vote towards Sydney as Manchester had been eliminated in the third round of voting. 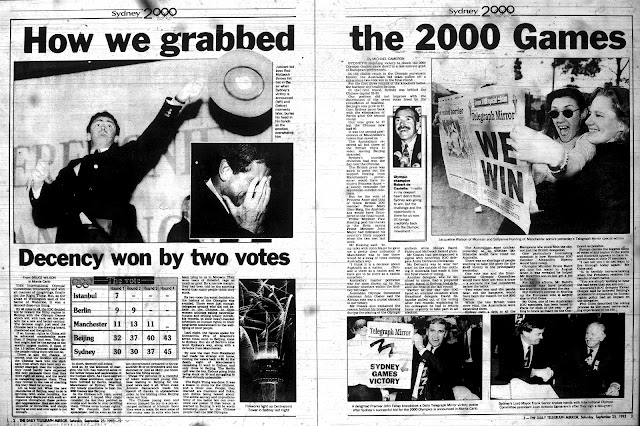 I also believed that the Americans had their role in aiding Sydney as they had concerns for rival bidder Beijing following the 1989 Tiananmen Square Massacre.

Also, I have included the special wrap-around of the front page from the same edition. 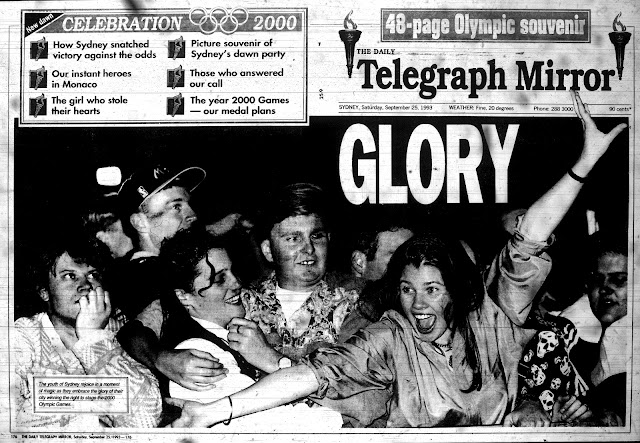 In 1966, $24 000 (twelve thousand pounds) bought you a unit right on the waters edge at Mosman Bay with easy access to Ferry services. 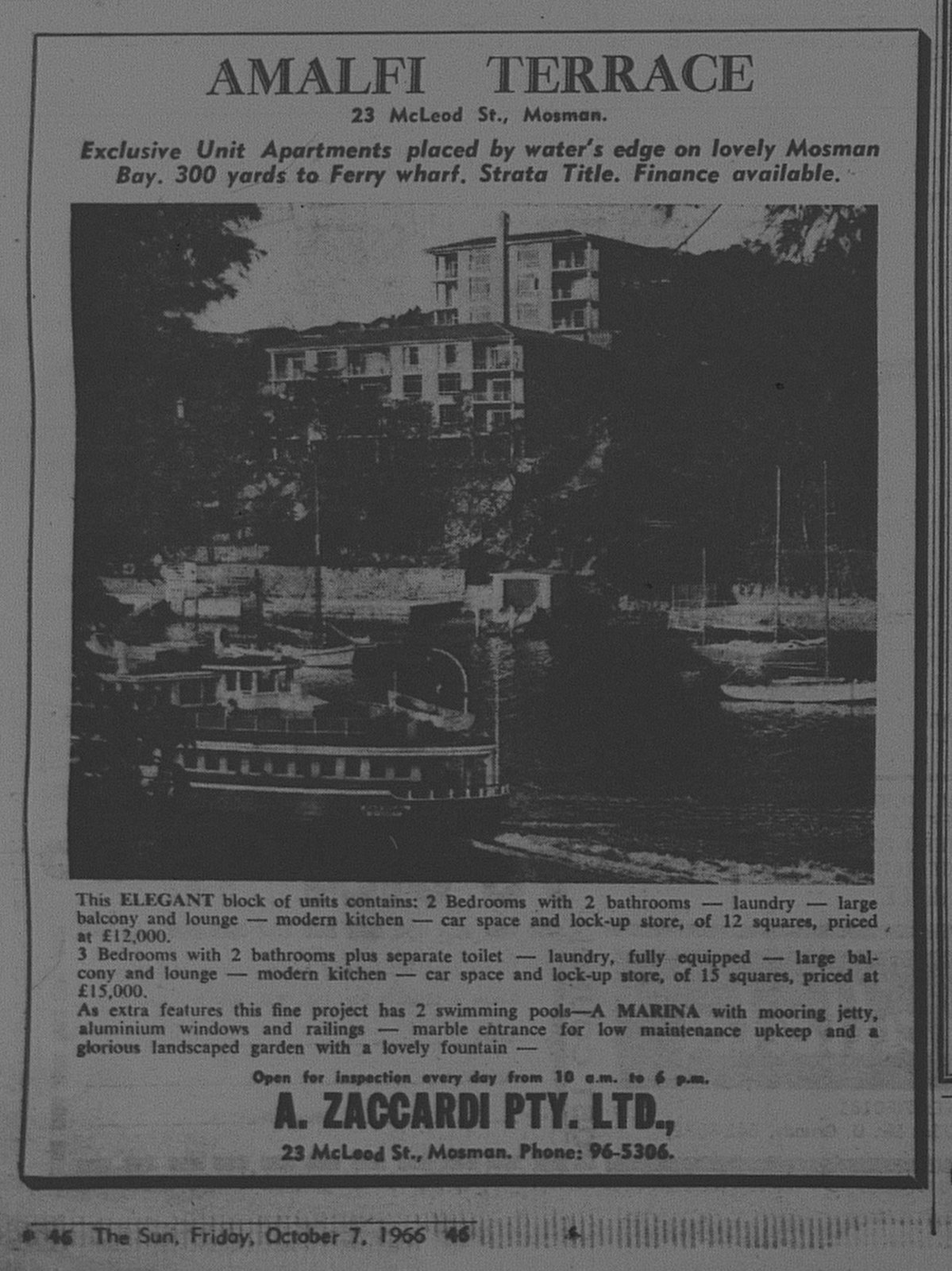 Tomorrow is thirty years since the Pitt Street Mall was officially opened to the people of Sydney.

It is believed that planning the mall dated as far back as 1970.

In 1980, Sydney City Council released a plan to close off Pitt Street between Market and King Streets with the intention of eventually extending it through to Martin Place and Hunter Street.

In 1982, the plan was amended to focus only on the mall running between Market and King Street and restricting through traffic from Hunter Street to Park Street.

By 1985, Sydney was the only Australian Capital City without a retail plaza, despite being the first Australian City to turn streets into plazas as evidenced through Martin Place during the 1970s. The NSW Government vetoed a Sydney City Council proposal to create the mall.

A year later, the NSW Government gave approval which was welcomed by city retailers, anticipating increased trade following the success of similar malls elsewhere. By November, plans were finalised. 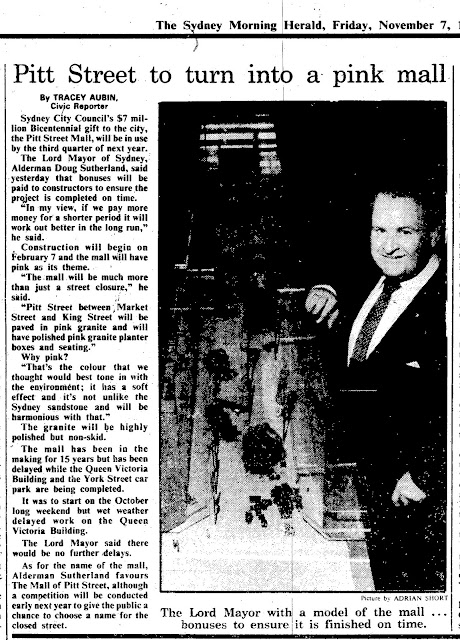 Work commenced in February 1987. The biggest impact on construction was on city traffic as drivers had to adjust to changes which continue to this day. For example, motorists now drove north up Pitt Street to Market Street as opposed to south in previous years. Two-way traffic was allowed on Pitt Street from King to Hunter Streets, but it would become southbound only.

The changes are best illustrated in this advertisement published prior to the closure: 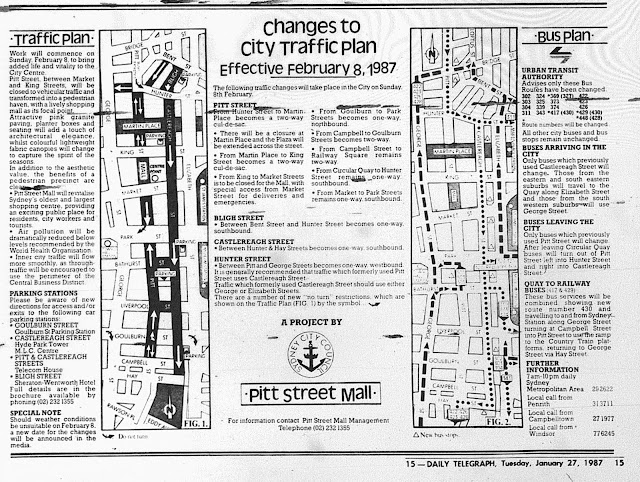 Below is media coverage of the chaos for city drivers. 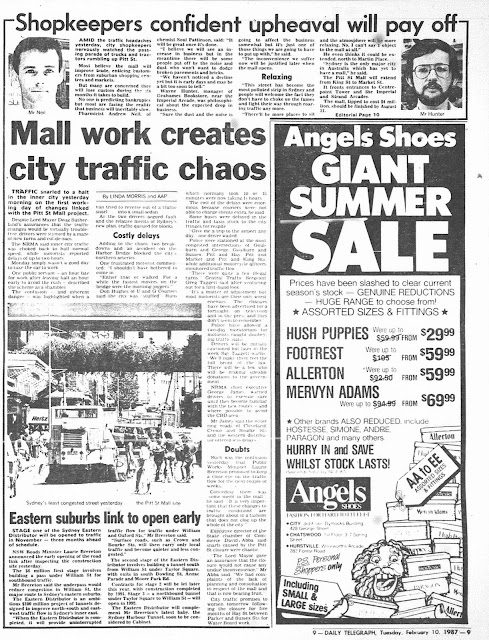 People did quickly claim the street.

After seven months of construction, the mall was officially opened by NSW Premier Barrie Unsworth on September 19, 1987. It was built at a cost of $5 million. 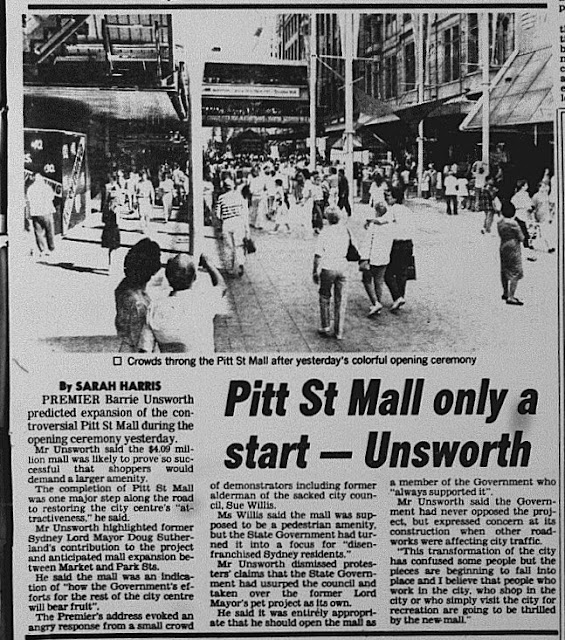 A special party night was held on September 24 as retailers were permitted to trade through to
midnight. 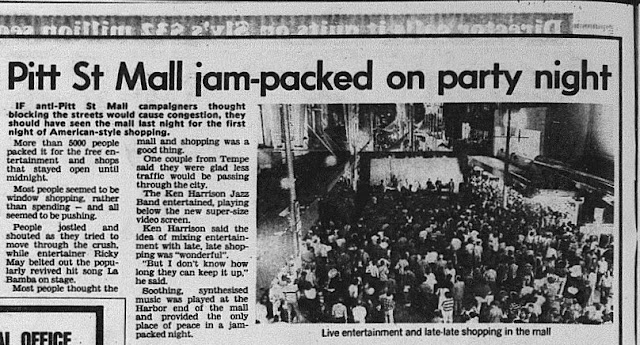 The mall itself in 2017 is vastly different from 1987, having undergone a number of upgrades. The most recent upgrade was in 2010-2011 coinciding with the redevelopment of the Westfield Sydney Complex.

Pitt Street Mall has proven to be a big success for Sydney. It is now a popular shopping destination, given its broad appeal to city workers, residents and tourists. The demand for retail space has made the mall one of the most expensive shopping strips in the world to lease. International retailers have also made their presence felt, particularly in the past decade including Uniqlo, Sephora and Zara.

Below is a 1968 advertisement for  AR Homes.

Last year, I shared some material relating to a proposal by Donald Trump to construct a casino resort complex on the eastern side of Cockle Bay at Darling Harbour.

This week, NSW Cabinet papers from 1987 were made to the public. In addition, The Australian last month had revealed information relating to how the Unsworth Government (1986-1988) handled his proposal to build a casino resort and will provide a short summary of the material.

We now have a model of what Trump's resort would have looked like which was published in The Australian on Friday. As I mentioned, Harry Seidler was commissioned as the architect by Trump. The hotel tower reminds me of Shell House in Melbourne.

Sydney was being promised something special. It would look quite dated by today's standards and perhaps a redevelopment might have been in order.

Last year, I referred to a report from The Sydney Morning Herald from May 1987. Trump had tried to evade police checks required for operators of casinos in NSW. Cabinet Minutes show that while the concept had "public appeal", a NSW Police Board Report had suggested that Trump had links to the Mafia. Financial viability was also identified as a concern by CIBC Australia.

While the Darling Harbour Redevelopment Authority and the Casino Operations Board were satisified with the Trump proposal, it (along with three other proposed schemes) were rejected by Cabinet.

In 1999, apartments in one of the first buildings in the Jacksons Landing development at Pyrmont (Regatta Wharf) was on sale. 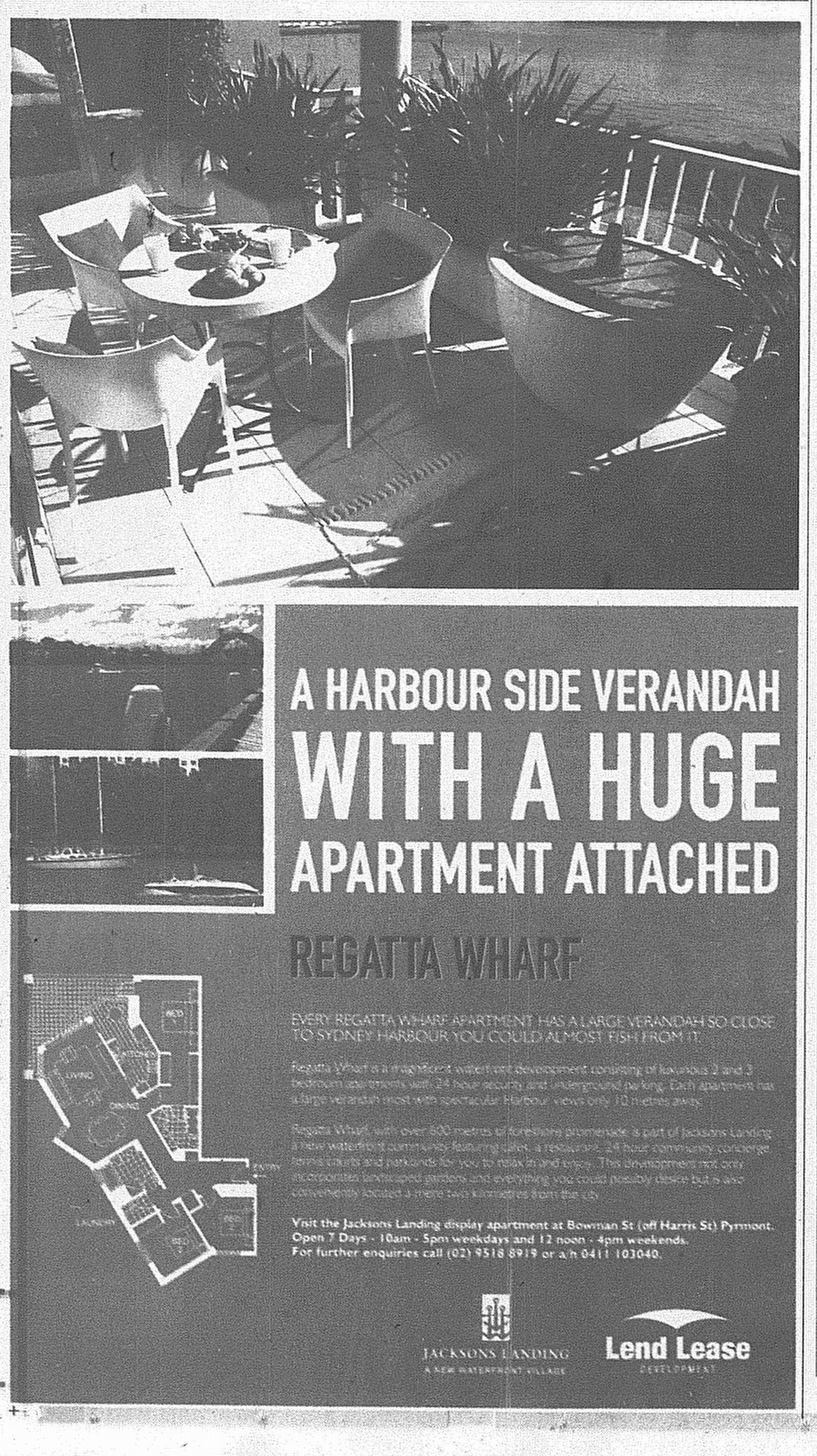 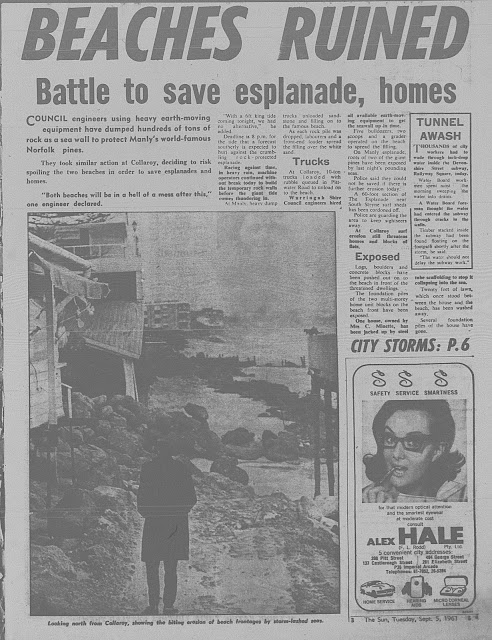 For many of us, we remember the devastation at Collaroy Beach last year when 10 homes faced collapse at Collaroy when the beachfront was eroded heavily during a storm.

Fifty years ago, homes and unit blocks along the beachfront were threatened with collapse when similar conditions affected the beach over several weeks in August and September of 1967

The worst affected dwellings were just south of Ramsay Street. This included the Flightdeck and Shipmates apartment buildings. The foundations were exposed leading to the risk of collapse.
One nearby home nearly fell into the sea. Fifty years and many storms later, its still standing. 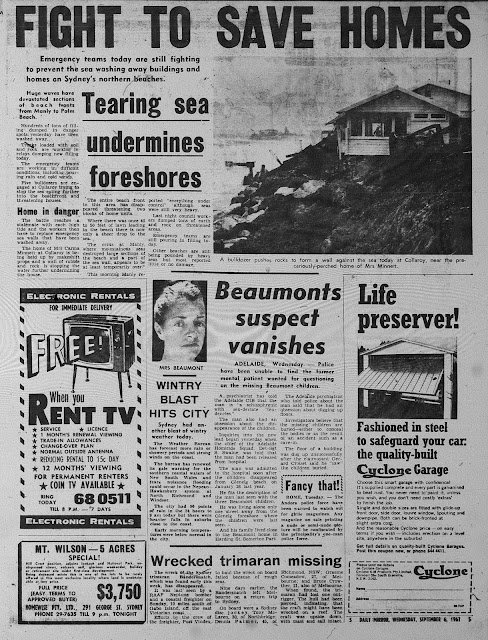 The battle against nature was won 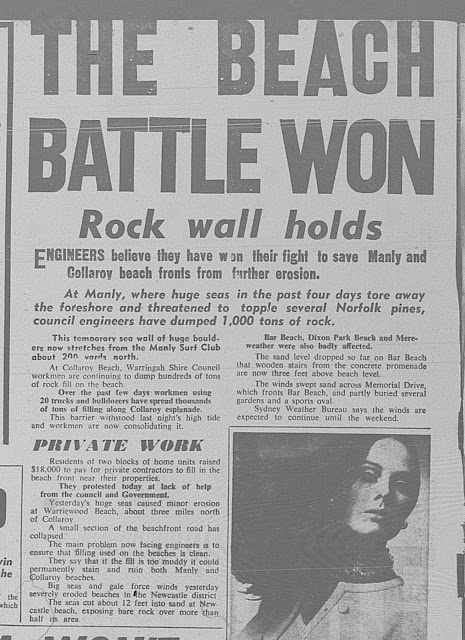 People were being warned back then about the loss of beachfront properties which could have occurred within a lifetime e.g. fifty years. The beachfront homes are still standing today. However, with natural processes, the Collaroy area will eventually succumb to the sea. 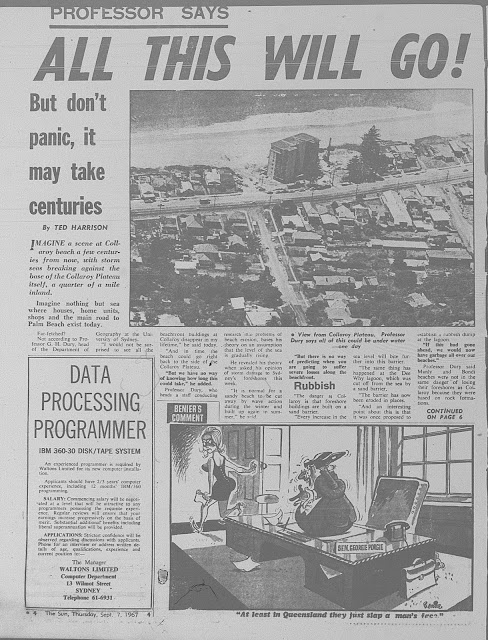 The properties in the affected area in 1967 eventually saw a rock seawall placed in front of their dwellings. This has prevented further erosion and any loss of property. However, it stopped at Ramsay Street. The worst affected properties in last years super storm were located to the immediate north of the street.

Is it worth spending a fortune on beachfront property? Some are prepared to fork out the money, but they do so knowing that the next storm could see their home washed out to sea.

Fortuantely, we have learnt in Sydney and NSW that building right on the foredune of a beach is not good in protecting a beach, but also the damage it can cause to buildings in the event of erosion. Highrise buildings are no longer permitted in beachfront areas that are vulnerable to beach erosion along with restrictions in housing development?

But what about homes built before the laws? One can still build, but bear the risks that the next major storm can bring.

Property Advert of the Week: 5 Acre Farms at Horsley Park (1968)

In 1968, acreage was on offer at Horsley Park for just a $390 deposit. Quite interestingly the area in question is mostly now Crown Land - Western Sydney Regional Park. The M7 slices through its western fringe and even is home to the Sydney Equestrian Centre. 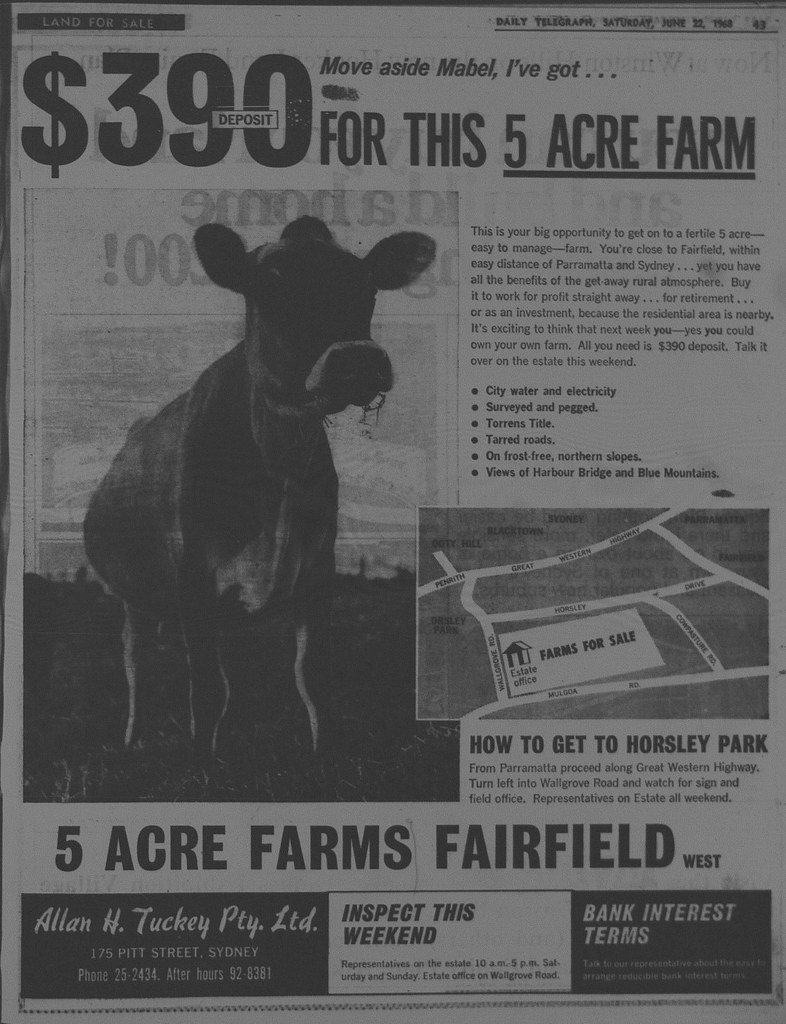