Earlier this month, I shared an article on the 1997 proposal of the Carr Government to construct a light rail link from Central running along Anzac Parade to Kingsford, which formed the foundation for the current scheme.

While organising articles in recent times, I found an article from October 1999 where the plans were axed due to the cost of construction. Other factors included:


Note that as of April 2018, the cost of the Eastern Suburbs and CBD Light Rail expansion has blown out by $1.2 billion.

Is this a forerunner to the cost blowouts that we see in 2018 as construction continues?

Property Advert of the Week: "Become a Pitt Street Farmer" (1968)

In 1968, John L. Nichols & Co promoted the Llandilo Park estate at Llandilo with acreage of up to 7.5 acres available. With the promise of local services and in easy reach of Sydney, it gave one the opportunity to see a "treechange" without having to leave the Sydney metropolitian area.

Five decades later, the suburb itself is still semi rural. However, Sydney's urban sprawl is licking at its edges, particularly with the recently built suburb of Jordan Springs and Cranebrook. The State Government is also proposing to see a new freeway extension from the M2 through the suburb to link the Bells Line of Road at Kurrajong Heights. 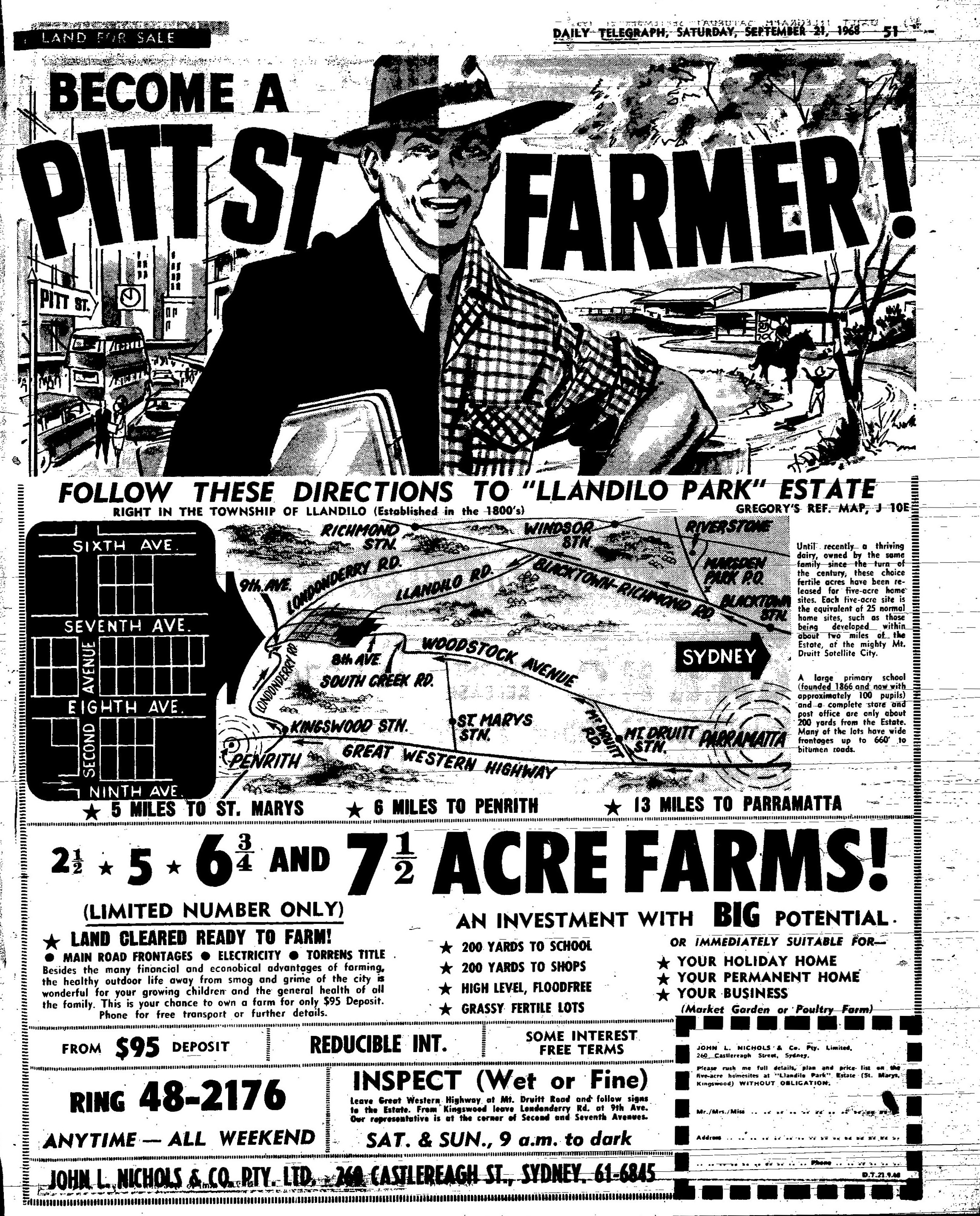 This month is 50 years since the Sydney County Council (now Ausgrid) relocated their headquarters from the Queen Victoria Building to a purpose built tower at the corner of George and Bathurst Street.

The decision to relocate to its present site dates to 1957, when its space in the Queen Victoria Building was "overcrowded". According to The Sydney Morning Herald on March 12, two city sites were being considered with 300 000 pounds put aside for a purchase.

Tenders to develop the site were called in 1961. The following year, it was nearly axed. By 1965, plans were finalised and construction commenced.

Here is a supplement that was published in The Daily Telegraph on April 8, 1968 when they commenced operations at their new location. Five decades later, Ausgrid remains on the site and now distributes electricity well beyond the former boundaries of the Sydney County Council and includes the Central Coast and Hunter Valley. 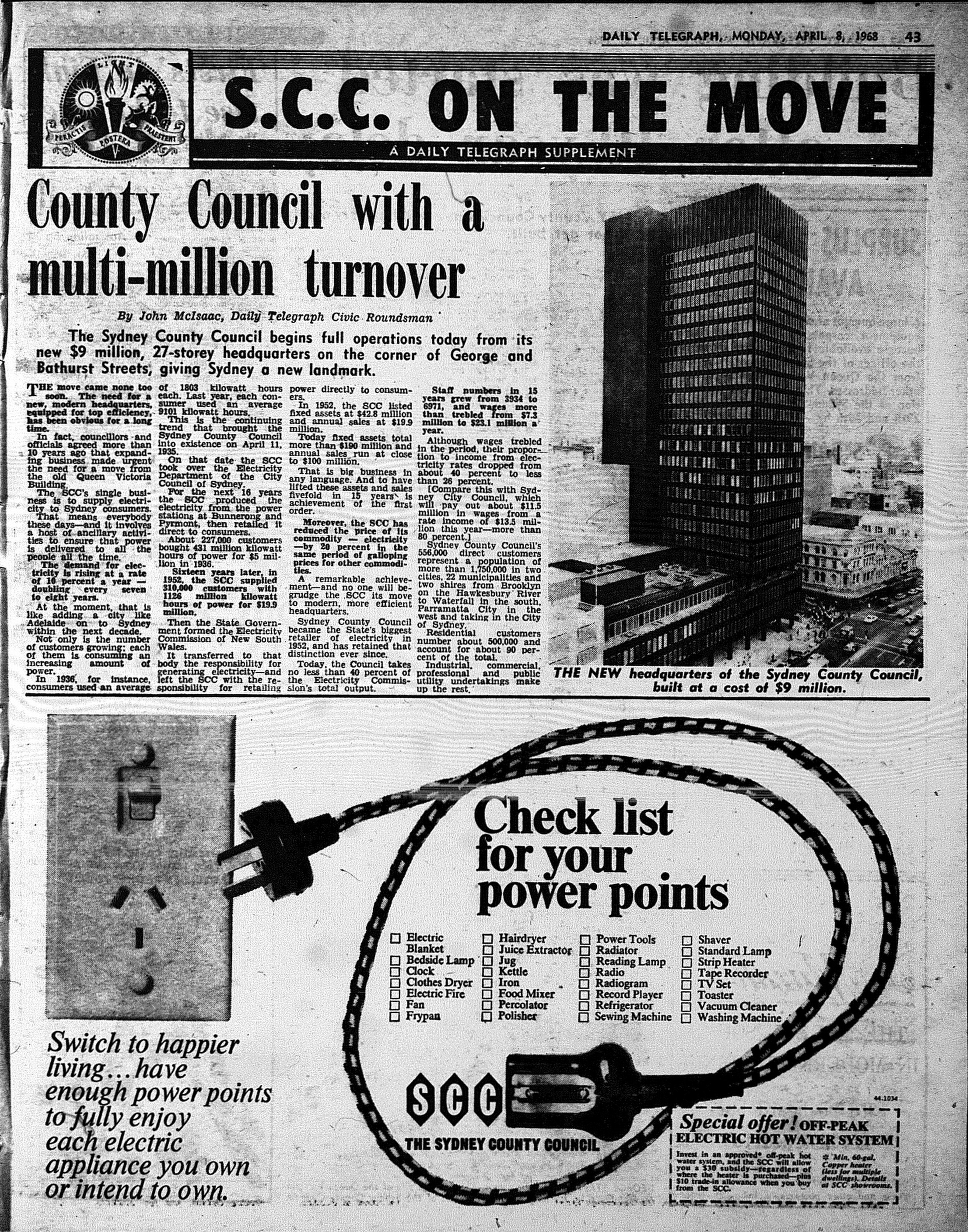 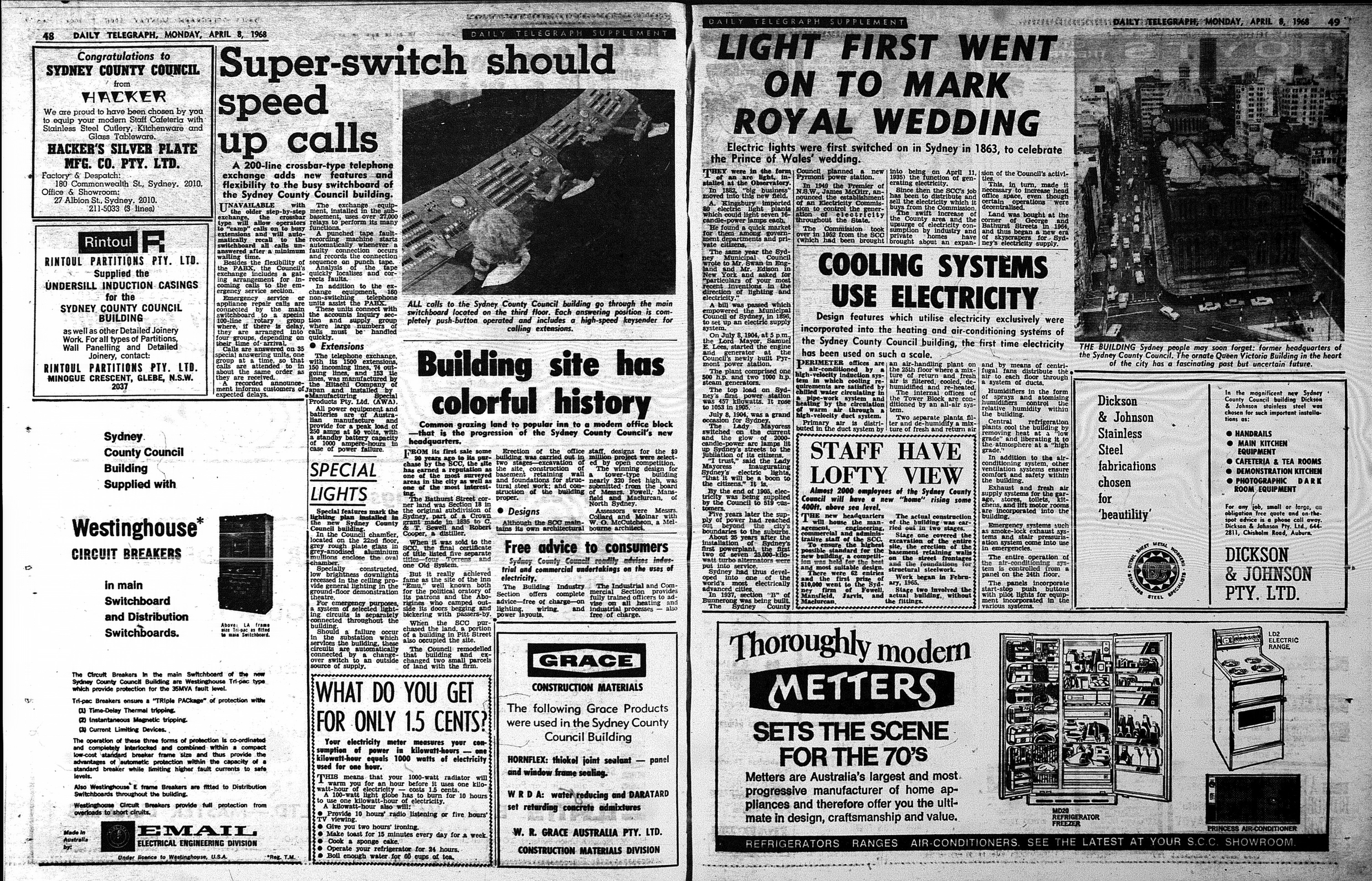 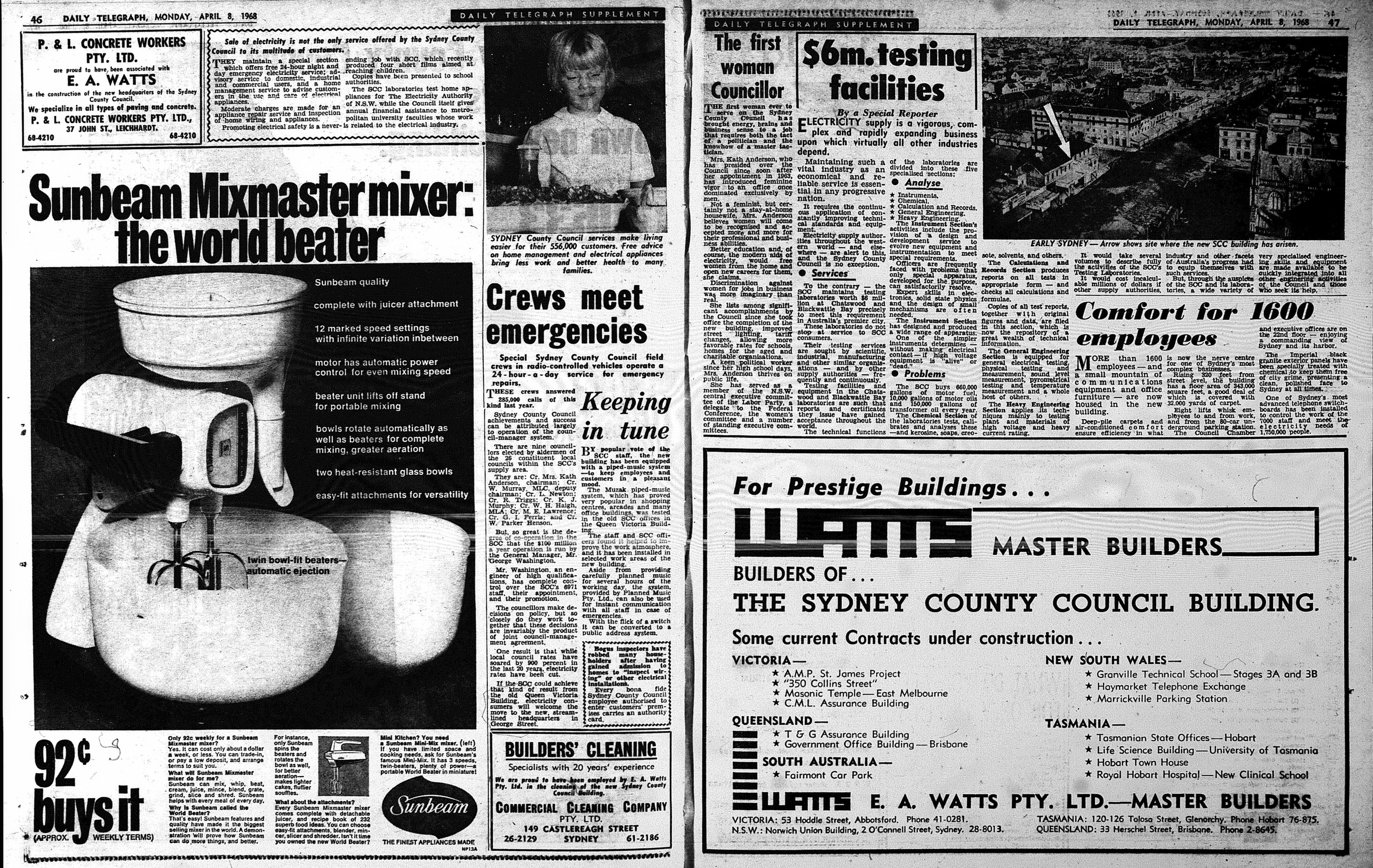 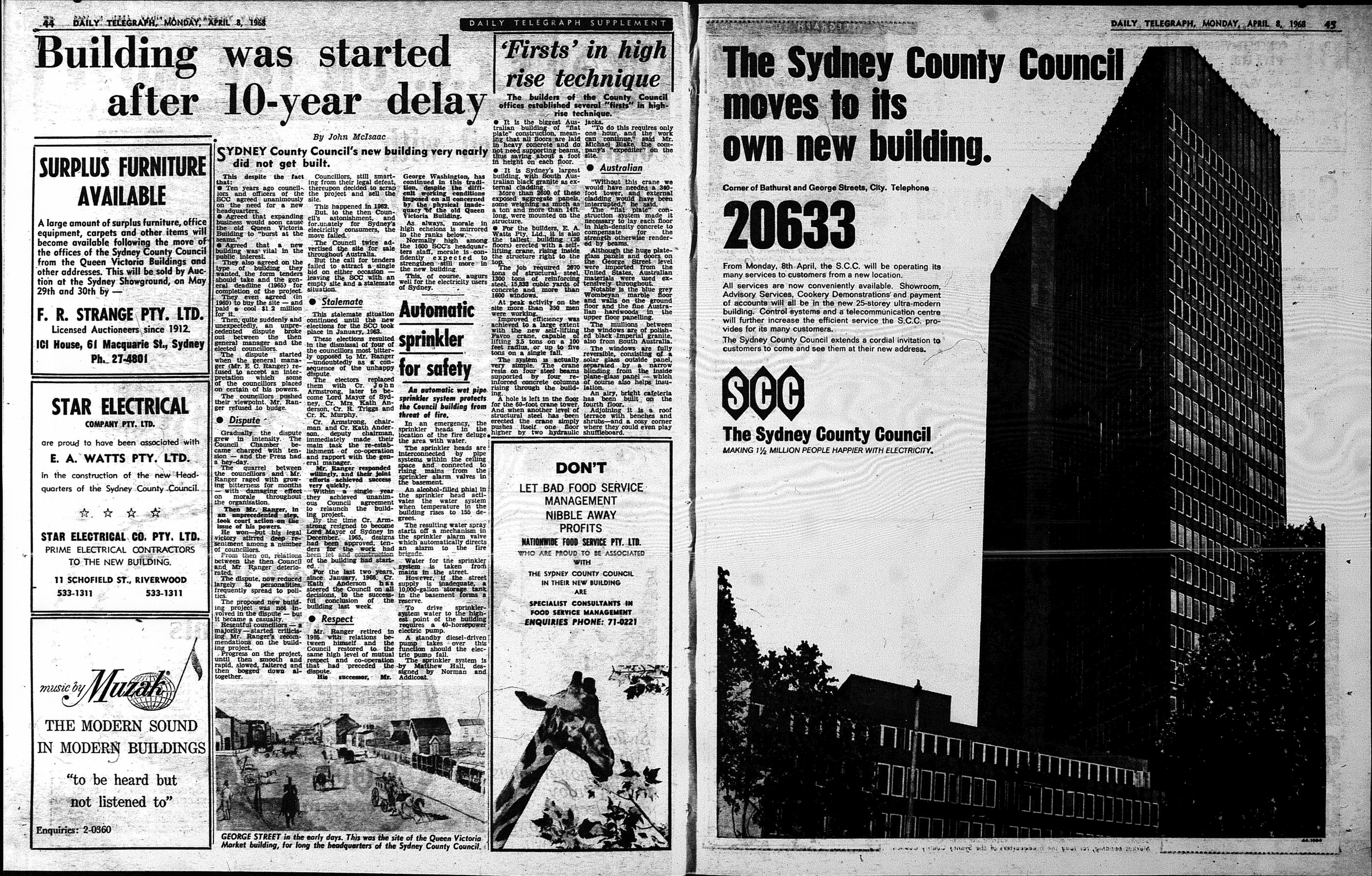 Property Advert of the Week: The Northview, Artarmon (1996)

Below is a 1996 newspaper advertisement for The Northview Apartment complex at Artarmon that was being developed by Meriton. 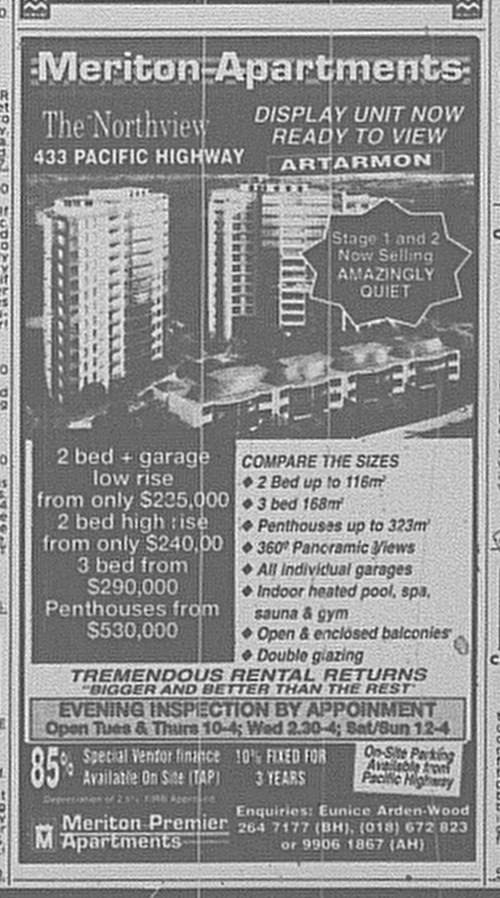 "Overdevelopment" is a very common term used in Sydney today to describe the rezoning of neighbourhoods for higher density development. Even in the 1960's, it was being talked about. As this 1966 newsreel shows, it was becoming an issue along the shores of Sydney Harbour. Many of the older homes were being demolished for new unit blocks, especially on the Lower North Shore.

By the end of the 1960's, Mosman council had placed restrictions on the construction of highrise unit complexes before a complete ban in 1973. North Sydney Council would also place their own restrictions on highrise development along the harbour foreshores.

Fast forward to the late 1980's and the issue poked its head up again when the Greiner Government tried to override planning guidelines to allow for higher density development along the harbour foreshores. This did not go down well with North Sydney residents and the local council, who had worked hard to maintain the scale of development and character. 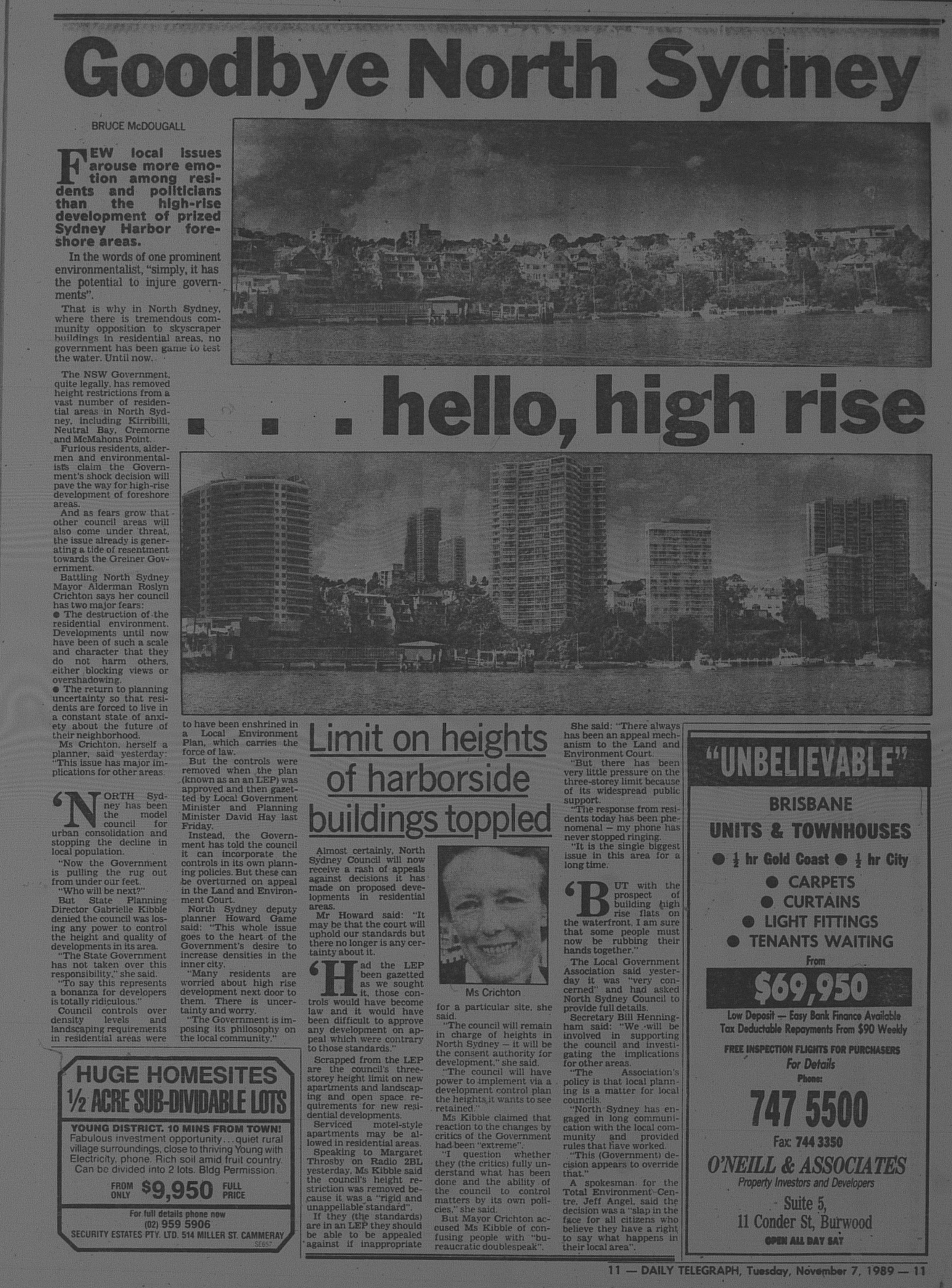 But there was a quick back down. 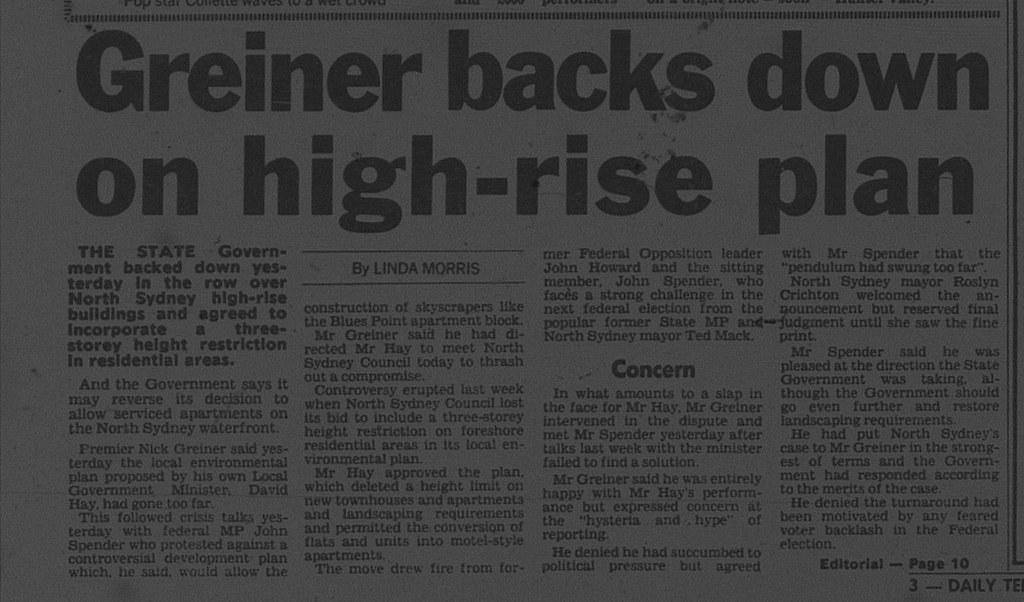 Today, councils on the North Shore are subject to criticism for not taking their share of new housing from residents other parts of the metropolitan area. That will continue for the foreseeable future, but the question is how to balance it?

Sticking to the Olympic Year (2000) again this week, heading to inner city Pyrmont. $225 000 bought you an apartment in the Watermark Tower.

Winten however forgot that the complex is right opposite The Star (then Star City) in Jones Bay Road, which would have provided a good marketing opportunity. 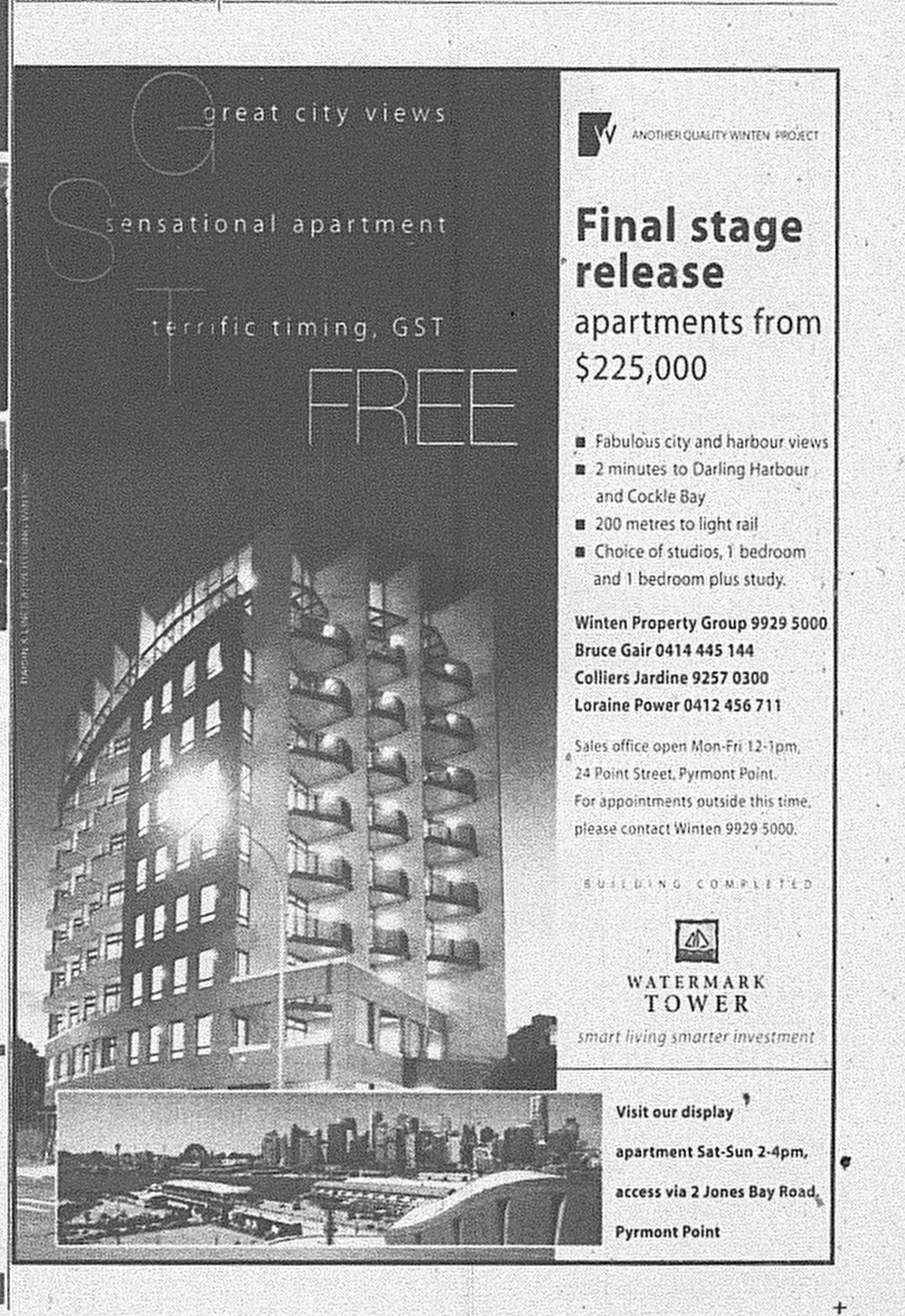 I have had a fondness for the fifty year old Park Regis Tower in central Sydney. It is the tallest brick building in Sydney (if not Australia) and was the first major highrise apartment tower to be built in the Sydney CBD.

I found renders of what it might have looked like from an earlier scheme. Note that the plant (service box) room was towards the south and much smaller. The upper floors didn't have the standard balconies. The swimming pool appears to have switched from the northern side towards the southern side, swapping places with the plant room. 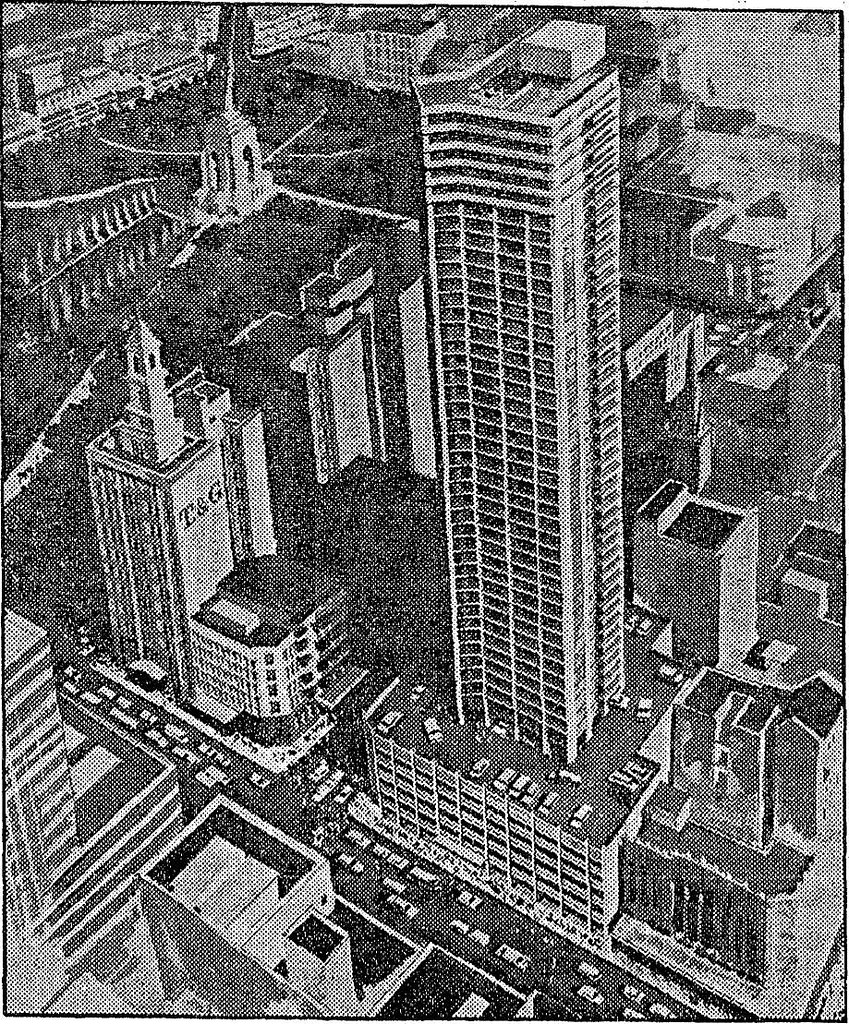 Stocks and Holdings actually advertised the earlier scheme in its advertisement promoting the apartments. 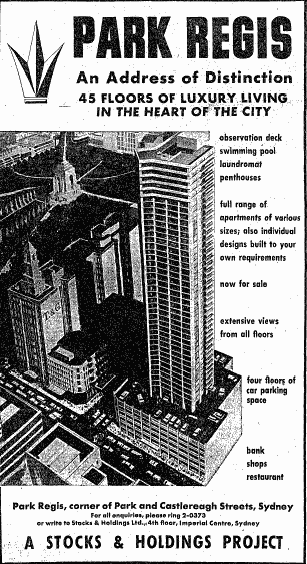 Here is an advertisement for the Botanic Cove development at Huntleys Cove (known at the time as Tarban) dating from 2000. The developer reported that construction was at the halfway stage. In 2002, residents decided through a vote to rename the suburb Huntleys Cove. 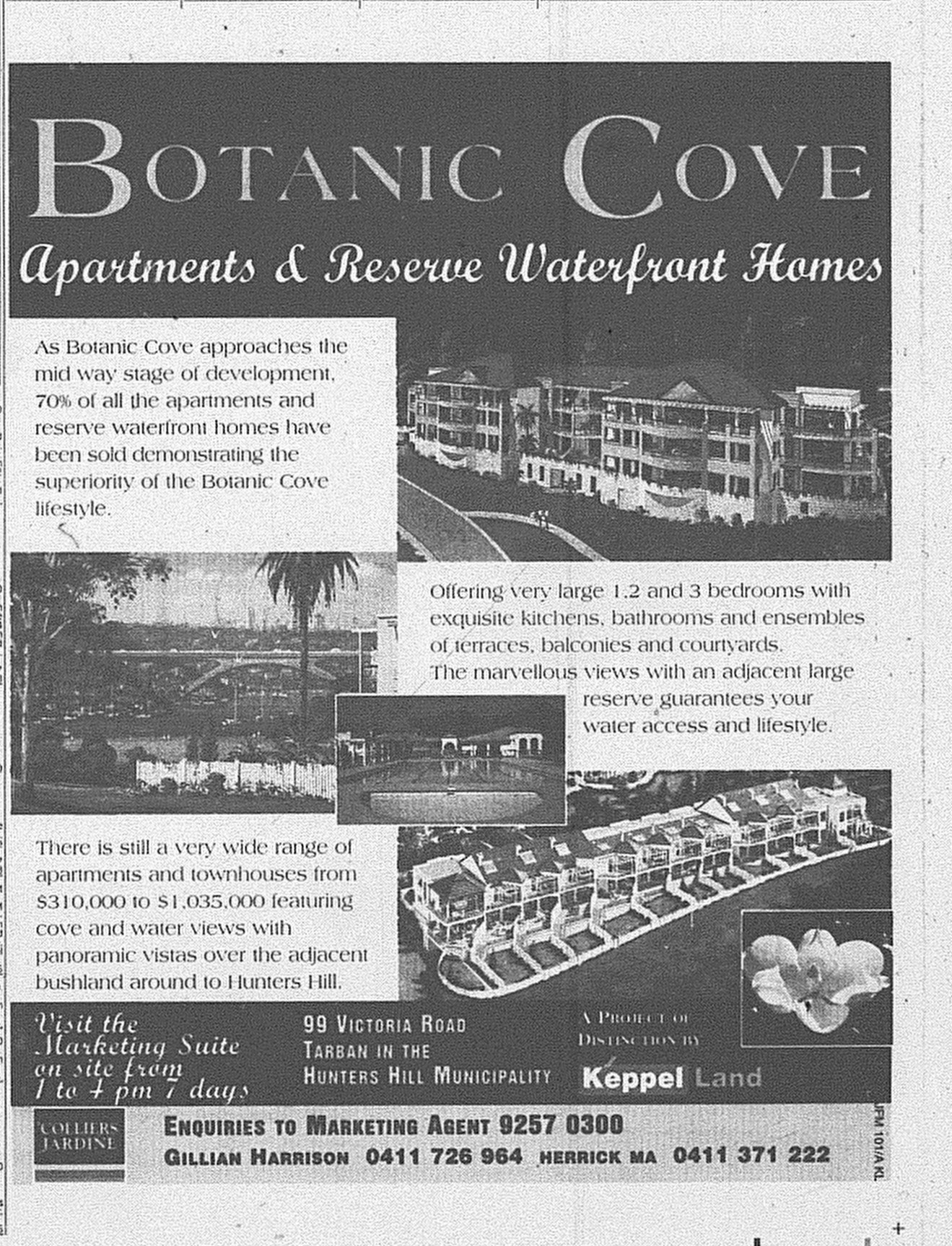 In 1997, the Carr Government announced a feasibility study into a light rail line to serve the Anzac Parade Corridor through to Kingsford.

The objective of the line was to end the dependence on Sydneysiders driving to Moore Park for major events.

One difference to the plans that we see today would involve tracks going down Albion and Foveaux Streets with trams moving in the direction of the vehicular traffic. In effect, it would do a loop through Surry Hills.

Compared with the current line (under construction), this would have seen light rail travel through the northern part of Surry Hills and would not serve the retail strip along Crown Street. Sending it through Devonshire Street will see the line go through the middle of the retail strip.

The downside is that tracks have had to be constructed through Moore Park to allow the line to connect to Anzac Parade, though it will be a tunnel.

At least though, the article shows that the concept of light rail lines in the Eastern Suburbs was actually considered for a number of years, and that Labor was (at the time) open to the idea.

What if the Carr Government had proceeded with the concept?