For two months, we have explored the evolution of 2 Park Street from its former life as a Waltons Department store into a major city building and retail complex.

But I have not answered a question that I put forward when looking at never built visions and concepts?

What would have happened had the proposal became reality? How would this have impacted the city? 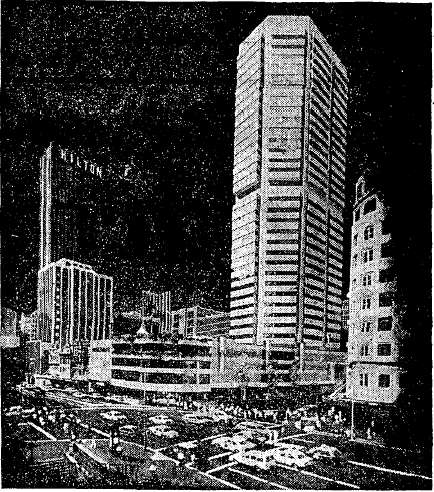 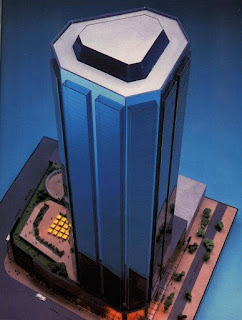 Skytower/Park Plaza (1987)
This scheme was never going to be approved under planning guidelines. However, I'll suggest possible impacts that the tower would have had on Sydney.

Park Plaza (1988)
The scheme was not going to be approved. However, Ill suggest possible impacts that the tower would have had on Sydney.

Like other proposals, there would have been the need to reconfigure the retail space to accommodate changes in retailing. Like the Skytower proposal of 1987, filling the office space was going to be challenging, though not to the extent with Skytower with 22 fewer levels of office space. It may not have had the international acclaim that Skytower could have but would still be one of the most prominent buildings in Sydney and with national recognition. 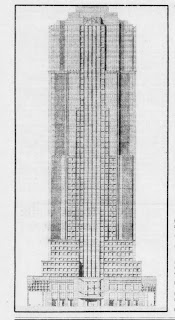 Architecturally, it may appear out of date today but given that it was 54 levels, it would have been half the struggle as with Skytower to attract tenants during the 1990's recession. As with all schemes, an upgrade or redevelopment of the retail space would have been required by now. 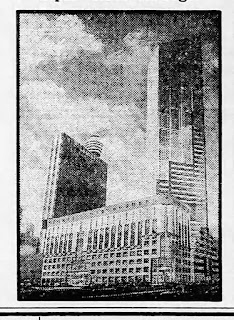 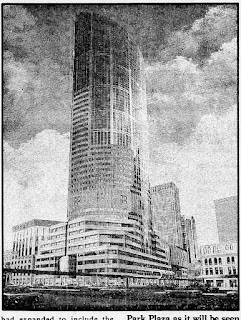 Leasing of office space would have been an initial challenge, but architecturally would have looked contemporary and imposing on the city skyline, especially around Town Hall which was in need of a real landmark tower. I look at Melbourne Central (Melbourne) and nearly three decades after completion, still maintains a contemporary look on the Melbourne skyline. The retail complex would be similar to Melbourne Central with a variety of retailers, even though it would have around 50 % less. Its appeal would probably be bigger than the Galeries that we see today.

Given the similarities in the shape and form to the site today, it would have evolved in a similar fashion to the Citigroup Centre today, though the retail complex would have more than likely resembled a typical shopping centre.


This entry concludes our series on the evolution of the Citigroup Centre at 2 Park Street. I hope you have enjoyed exploring the various schemes in the 1980s and 1990s to redevelop the site of the Waltons Department Store and the dramas associated with just placing a building on the site including the infamous hole in the ground which lasted for a decade.

Previous Entries in the Series

Property Advert of the Week: Parkes Home Units at Eastlakes (1966)

Below is a 1966 advertisement for home units at Eastlakes. These were built by Parkes Developments. The 4750 pounds would equate to $9 500. According to the RBA Inflation Calculator, the price of the units would cost approximately $122 500 in today's money. 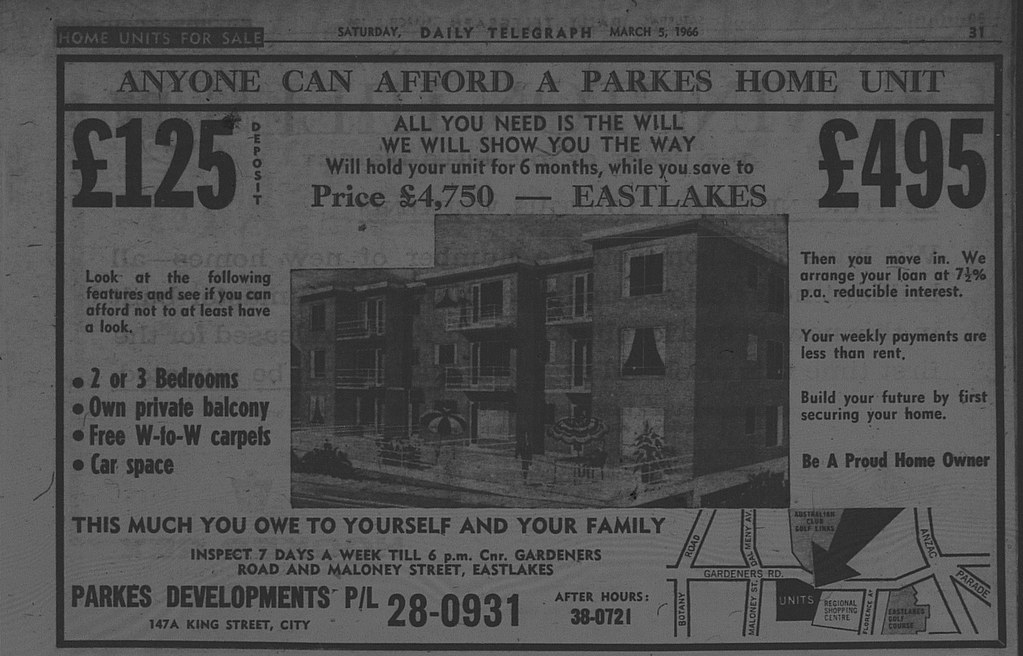 While decimal currency had been introduced around three weeks before publication of the advertisement, prices were still advertised in pounds.

Source: Parkes Developments. 1966. "Anyone can afford a Parkes home unit" (advertisement). The Daily Telegraph, March 5: 31.
Posted by Fabian Amuso at 00:00 No comments:

This week will see a drift from what is normally posted. I would like to share some photos that I have taken in recent times of The Galeries (formerly Galeries Victoria) and Citigroup Centre as I reflect on the complex today.

Over the past two months, I have posted about the drama just to build on the site which lasted nearly two decades. It took eighteen years from the release of the first proposal before the site was developed.

Coincidently, it has been eighteen years since the complex was opened to the public.

What have the past eighteen years been for the complex? 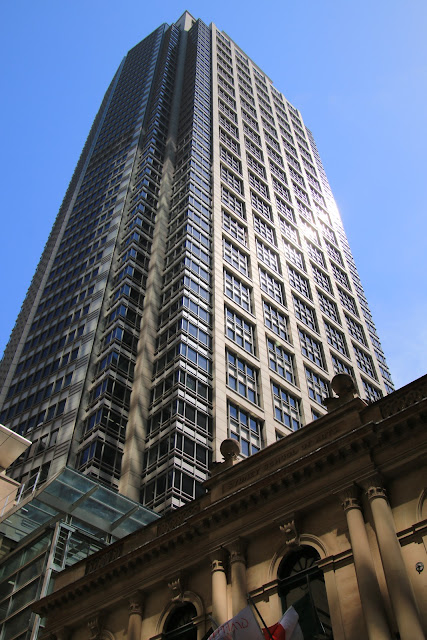 As for the tower itself, it has been popular with commercial firms attracted by premium grade office space. As of October 31, 2018, only level 8 was vacant. It's just not the quality of the office space that attracts the tenants, but also the location. It is nearly right above Town Hall railway station with direct access to the station, and easy walk to Pitt Street Mall, Hyde Park and Darling Harbour.

The Galeries Victoria has become a popular shopping centre within the Sydney CBD. It may lack the history or prestige of the Queen Victoria Building and Strand Arcade, it has shone in its ability to innovate how people shop in central Sydney.

The Sydney Arcade introduced Sydneysiders to enclosed laneway shopping, but the Galeries Victoria provided multiple laneways that connects to a square in the centre of the complex. Apart from escalators and staircases, skybridges were also constructed to link shops in each section. 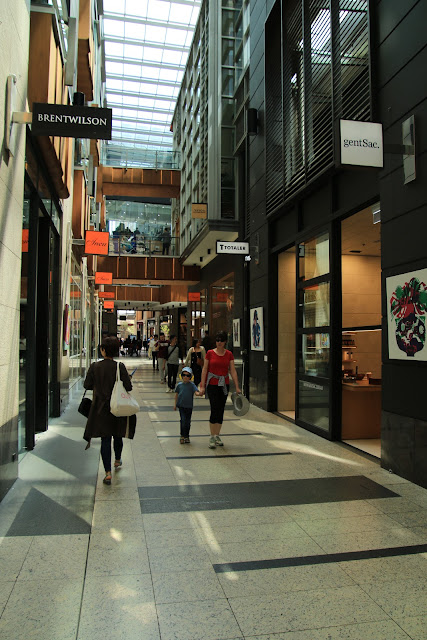 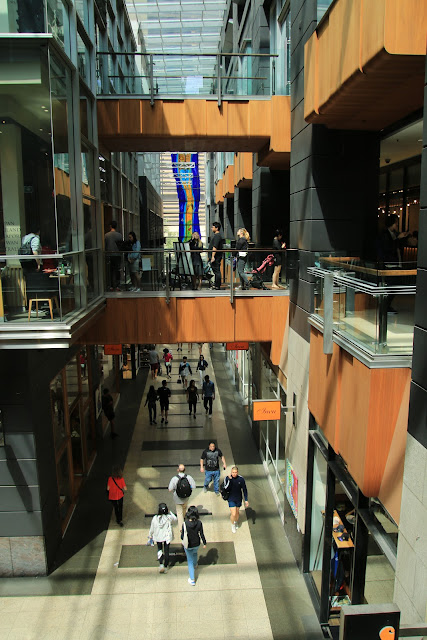 In the square itself, there is a full height atrium, which allows natural light to filter in, even in the shadows of nearby towers. 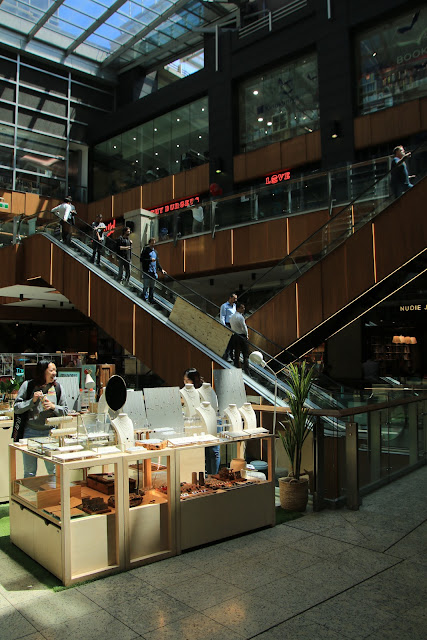 With the retailing offering itself, it has also been innovative focusing on lifestyle, fashion and dining. JB Hifi opened their first CBD store in the basement level over a decade ago. Since then another four JB-Hifi stores have opened in central Sydney.

It is the only CBD shopping centre that has a furniture store - Muji. Freedom Furniture traded for a number of years as well. There are also retailers trading in the centre that you may not find elsewhere e.g. Kinkoyounya.

Finally the former Sydney Mechanical School of Arts Building (1836) is home to the popular Arthouse Hotel which opened in 2001. 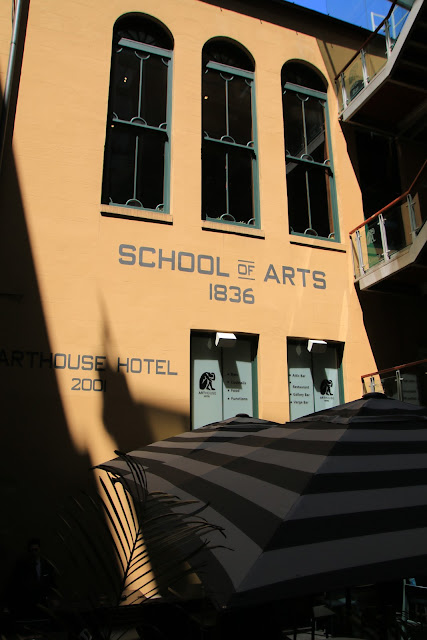 I wonder what the next eighteen years will bring.

Previous Entries in the Series

As mentioned a fortnight ago, I have had to change the photo hosting location of images featured in this blog. Since then, all posts from 2014 have been checked and all images are available again for each entry. I am now working through posts from 2015.

Last year, I posted a 1999 advertisement for the Moore Park Gardens complex at East Redfern. Here is one from 1997. 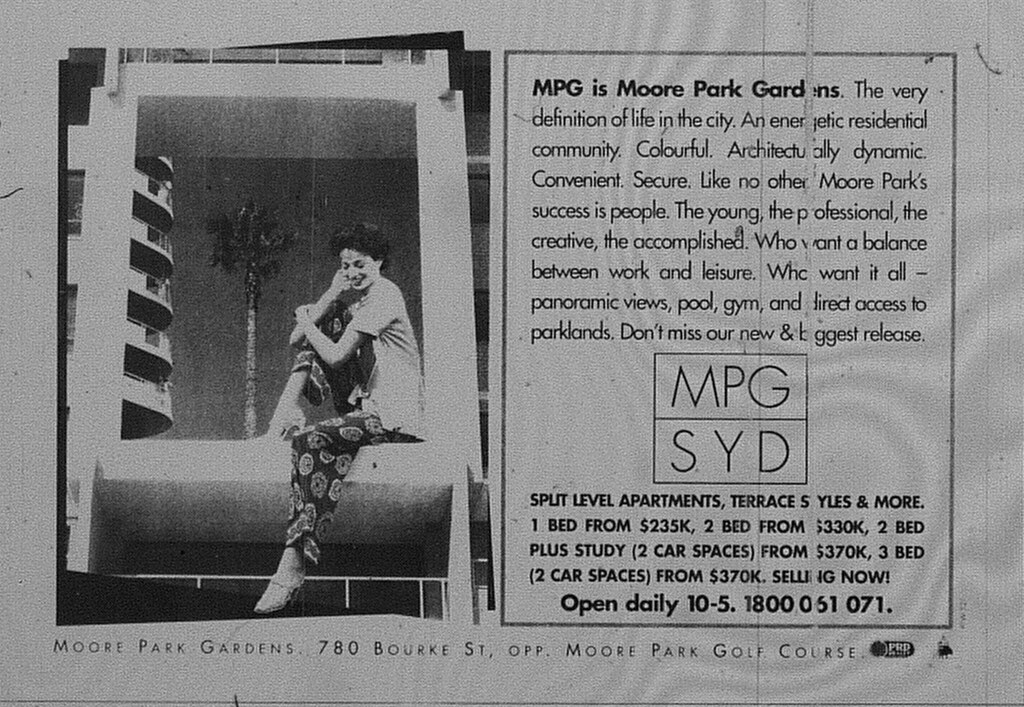 The Park Tower II proposal (1994) which I shared with you last week would set the parameters for the final design of the Citigroup Centre including height limits and the size of the building.

In 1996, Kumagai and Sogo unveiled new plans which were lodged with Sydney City Council. This one is quite similar to the 1994 scheme. The tower was 50 levels tall rising to a height of 243 metres (Tip of spire). The height to the roof is 206 metres.

There is only one spire in the postmodern design by Crone and Associates who despite the obstacles, still remained involved in the development.

Interest was high, most notably Citibank who wanted to consolidate their Sydney offices into the one building. At the time, they were based in Clarence Street.  NIKE was interested in the retail space, seeking to open a three-level department store.

Council Approved the scheme on December 19, 1996. However, Citibank wanted 350 parking spaces which was refused. Citibank threatened to withdraw their interest if the spaces were not approved.

By August 1997,  Ipoh (owners of the Queen Victoria Building) had purchased the $120 million retail component and Multiplex had been awarded the rights to construct the tower. MTM Funds Management and Bankers Trust would also team up to fund construction. 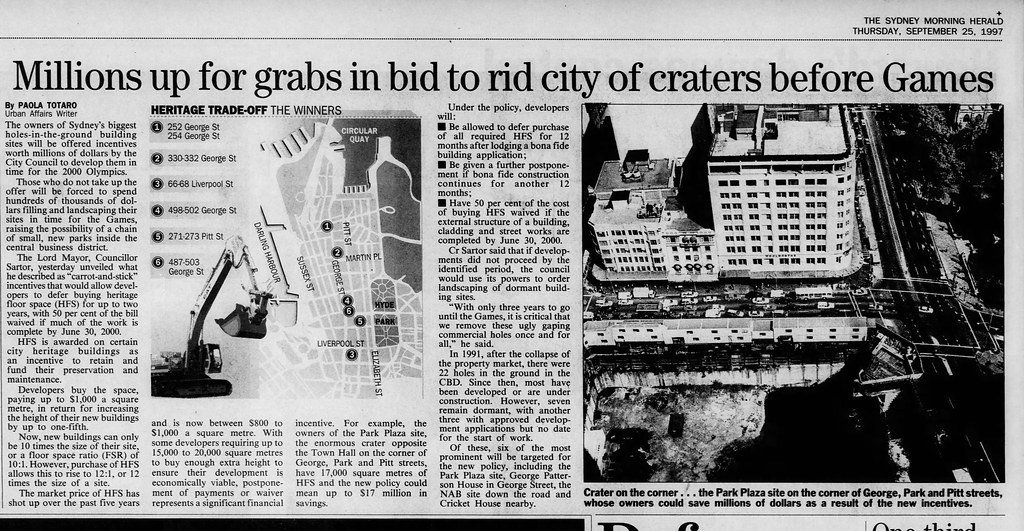 Source: Totaro, P. 1997. "Millions up for grabs in bid to rid city of craters before Games". The Sydney Morning Herald, September 25: 6.

By the start of 1998, the pieces were in place to construct the tower which was estimated to cost $600 million and be the largest office building built in Sydney since Grosvenor Place a decade before. 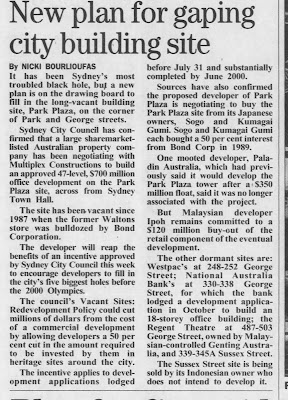 In May, funding had been secured for the tower, which was estimated to cost $600 million to build. Citibank had also confirmed that it would act as the anchor tenant. 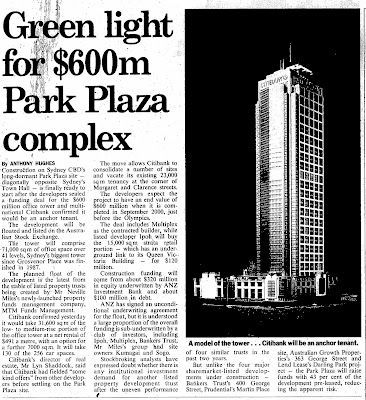 Construction commenced in May 1998 and was completed in July 2000. Galeries Victoria opened in late 2000. Below are a few photos from the ArchivePix Image Library at Sydney City Council

The official opening was on August 30, 2000, conducted by the Lord Mayor - Frank Sartor. 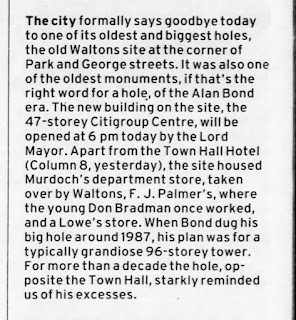 However, the public was allowed to access the Galeries Victoria retail complex, which was opened on July 30, 2000, as part of Open City. I recall going there and taking a look. 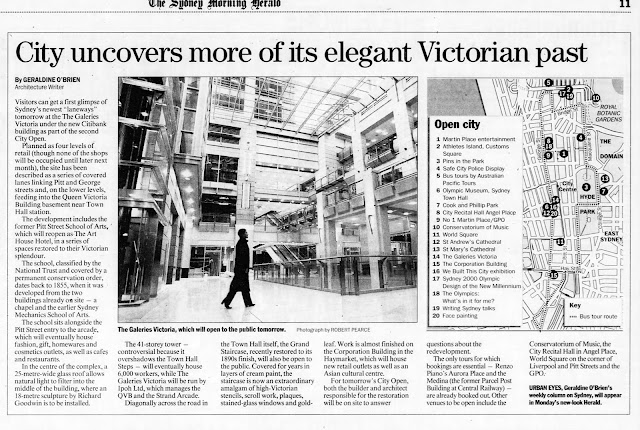 The development of the site included a full restoration of the Sydney Mechanic School of Arts Building in Pitt Street, which is now the Arthouse Hotel.

Next week, we look at the impact that the Citigroup Centre and The Galeries have had on Sydney since completion. The following week, we will answer the What if? question as to what might had it been if any of the rejected schemes became reality.

In 1967, Treloar Reality were selling blocks of land on a 45 pound ($90) deposit in Jerrara Street, Engadine.

Since commencing this blog in 2014, I have hosted my images through Flickr so you can view and enjoy the images that are presented in each entry.

I have been advised today that my free accounts will be restricted to 1000 photos from early 2019.

In response, I've had to delete most images from my Flickr accounts. This will mean that in the short term, that many entries (especially older ones) will have no images available.

I have kept copies on Google Photos and I am currently in the process of updating entries to ensure that all images are present.

This will be a timely process with no certain date of when this will be completed. I will update you in due course. For the time being, blog entries will continue as normal given all issues with photo hosting have been addressed for present and future entries.
Posted by Fabian Amuso at 11:40 No comments:

Last week, I looked at the Park Tower proposal from 1990 for the former site of Waltons. The start of the 1990s saw Sydney (and Australia) enter the "recession that we had to have". Business confidence had been dampened reducing demand for office space. In addition, the property market had collapsed while the city experienced an oversupply in office space as existing projects were completed.

The excavated site from 1987 would spend most of the decade laying dormant and had become one of the most prominent of the 22 or so building sites that lay vacant across the city.

By the middle of the decade, Australia had slipped out of recession.

In 1994, Kumagai Gumi and Sogo unveiled their latest proposal. I don't have details about the number of floors but I would believe it would around 48 levels, consistent with their 1990 scheme but also for the eventual 2 Park Street tower that we see today.

It is this scheme that would form the basis for the tower that would eventually be built, noting the height, setbacks at the top of the tower but also the addition of two spires; which would be reduced to one in the final approved scheme

The artist's impressions were from an article in The Daily Telegraph Mirror that was published in April 1994. 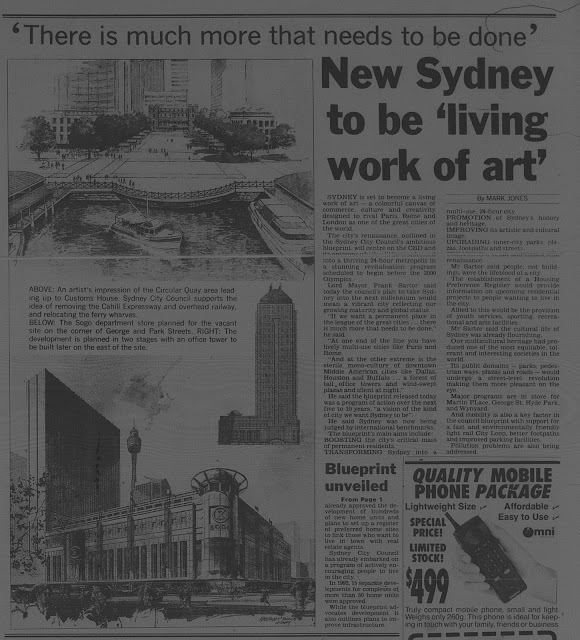 The complex was proposed to be built in two stages with the retail podium in stage one including a Sogo Department store with the office tower to be built later.

By September, there was speculation that commencement of construction of the department store would commence. 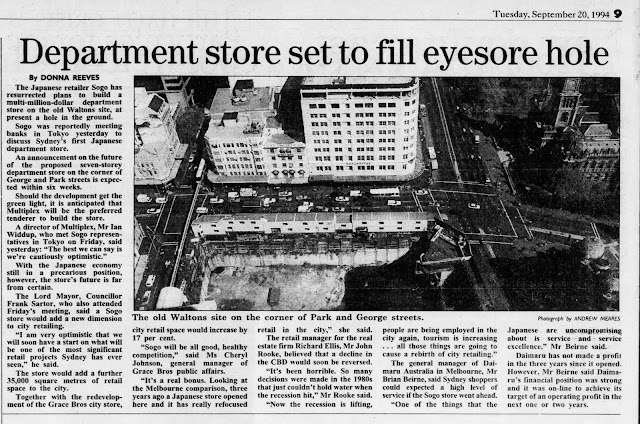 But despite the plans, the site would remain dormant for longer. Next week, we will see the light emerge when I post about the tower we see today and the accompanying Galeries Victoria. 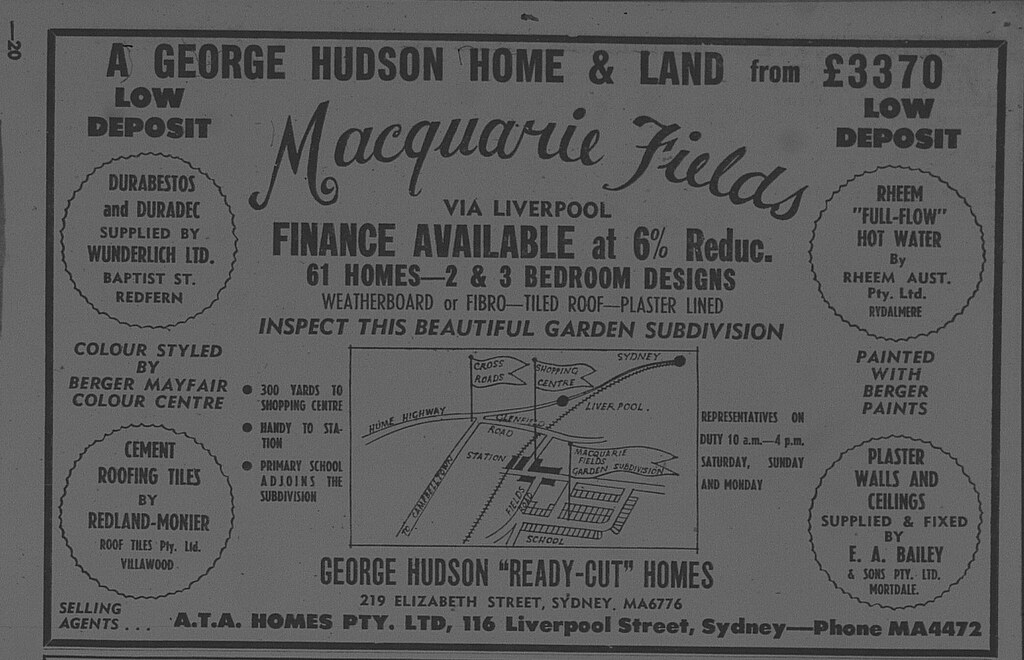 
According to the RBA Inflation Calculator, this was the equivalent of $109 000 today.
Posted by Fabian Amuso at 00:00 No comments: