When the redevelopment of the Queen Victoria Building into a shopping complex was completed in 1986, it would change Sydney retailing. Sydney ended up with a major shopping destination in the city centre, but the focus is on something else that might appear minor on paper but did have major ramifications for retailing in central Sydney. Its underground level would link the retail around Town Hall with the soon to be completed Pitt Street Mall. 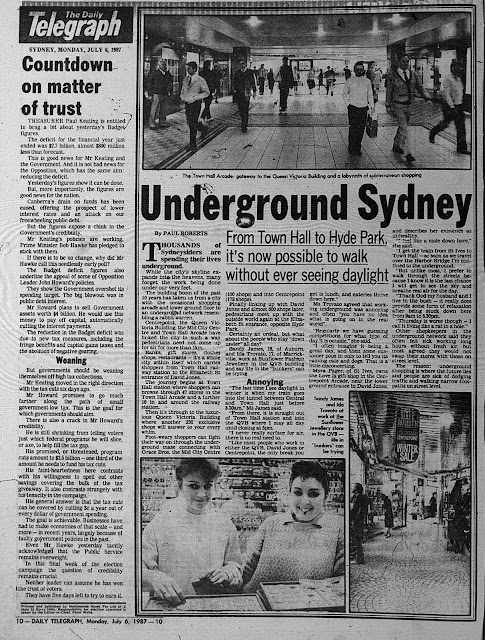 The report claims that it is possible to walk from Town Hall to Elizabeth Street at Hyde Park without seeing daylight. This is not possible, even today. You would have to cross Pitt Street (now a mall) to reach Centrepoint from Grace Bros, even if it meant using the sky bridge. It is possible however to do the trek without physically going outside.

As for the move towards underground retailing, it had been in the council's agenda for at least two decades beforehand. It was not until the 1980s when this had begun to take off. It was the redevelopment of the Queen Victoria Building that would cement underground retailing in Sydney.

The redevelopment of Centrepoint into Westfield Sydney in 2010 then made it possible to walk to Martin Place without having to cross any streets. Links were built into the Glasshouse retail complex which was linked by sky bridge to the MLC Centre and Martin Place train station. I do remember though pre-redevelopment that it could be done through the former Imperial Arcade and Skygarden. This required going through Lincraft in the Imperial Arcade to make a direct walk to Martin Place possible.

Not long after the QVB redevelopment, the retail podium of 586 George Street also included a direct link between the George Street cinema strip and Town Hall Station. There were plans even to link Regent Place to Town Hall in plans but never happened. Even the proposals for Fraser Residences examined it but did not proceed A lost opportunity for retailers there. In 2000, The Galeries Victoria also joined the underground retail network helped by its location almost directly above Town Hall Station.

While the underground retail complexes and walkways have been of benefit to city retailing, its main weakness is that it takes away foot traffic at street level. Sydney streets are not teeming with people as say Melbourne which largely focuses on retailing at street level and drawing on its network of laneways and historic arcades to lure shoppers.

It has been fifteen years since the Galeries Victoria was built and since then, there have been no new major retail developments built below street level in Sydney's CBD. It has shifted back towards street level. With the success of the Pitt Street Mall in attracting city shoppers, the city retailing precinct has expanded east into Castlereagh and Elizabeth Streets, north towards Martin Place and west onto George Street which over the past decade has attracted major retailers, spearheaded by Apple who opened a flagship store at the corner of George Street and King Street in 2008. UK clothing giant Topshop opened in the former Gowings Building in 2013. The new light rail line snaking its way down George Street could unleash further growth in street level retailing in central Sydney with traffic forced off the city's main throughfare, creating a shopping environment that will be safe for visitors to our city.
Posted by Fabian Amuso at 07:27 No comments:

Program Homes had a small display village at Killarney Heights in 1967 with four model homes on offer featuring four bedrooms, yet there were 23 variations that you could have to the plans.

And yes, they were still allowed to advertise in pounds in 1967 as part of the two year transition to decimal currency from February 1966.

Here is a rare find in terms of skyscrapers that never saw the light of day. In 1969, there was a $12 million scheme to demolish the Regent Theatre, build two new theatres and have a 44 storey tower rising above it. Not only we would have lost a theatre but people of my generation having to put up with an aging visual eyesore above Town Hall Station.

Normally I would post where I sourced the article from, but the only date that I have is from October 1969 and it's from The Daily Telegraph. This was from a time where I did not really feel a need to note exactly where and when the article came from.

The Regent Theatre was demolished in 1989 to be replaced with an office tower, but the 1990-1991 recession and Sydney property crash left the site idle until 2004 when two apartment towers commenced construction. It was not until 2007 that the redevelopment of the site had been completed.

The main tower would be Lumiere Residences (151 metres /47 stories) and Fraser Suites (114 metres/33 stories) designed by award-winning UK Architect Norman Foster.  There would be no theatre in the podium, but rather a retail complex - Regent Place.

This week, we return to Castle Hill, where 58 homesites in Castle Street, were offered for sale in 1967. Check out the lush bushland in that photo as well. Highrises are slowly rising over the area half a century later.

With the Easter Show set to start on Thursday at Sydney Olympic Park, I thought I'd look back through my collection to gain an insight into what the Easter Show was like 25 years ago.

1991 was the second Easter Show that I can remember going to and as pointed out last year, not missed one since.

The 1991 Royal Easter Show was the seventh last show held at Moore Park (1997 was its final year). In the previous year, its future was being sealed, it was heading west to Homebush Bay. Sydney had also made its decision to bid for the 2000 Olympic games, and that would further change plans.

As with every year so far, I  have found the preview guides in the newspapers to be highly valuable in terms of what was happening in 1991.

It may appear to be more affordable to the average person, but remember you could purchase either a show entry ticket only or the all in one ticket like today where you pay a flat admission charge and includes public transport to and from the show on all modes. Cityrail offered Showlink Tickets which included a return rail fare to Central and bus to Moore Park.

This year, an adult will be charged $40.50 for Easter Show admission but is lower if booked online.

Park & Ride Stations were at the Goulburn Street Carpark and the Domain Carpark. 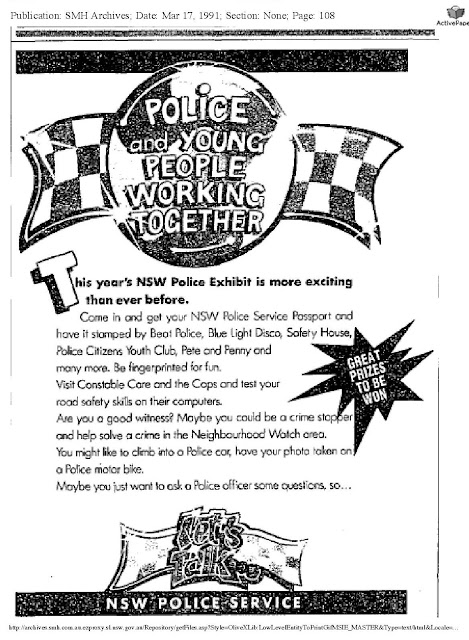 In 2016, there are over 300 bags available, and all viewable on the Easter Show website.  The choices can be overwhelming today, but in 1991, many options were there.  In 1991, showbags were from $2 to $10 with the average bag costing $6. Showbags in 2016 will sell for as high as $30. Bertie Beetle was and still is $2 though you can choose from several other Bertie Beetle Bags that retail for up to $15. There are two show bag advertisements that I've included for you to get a feel of what was available. 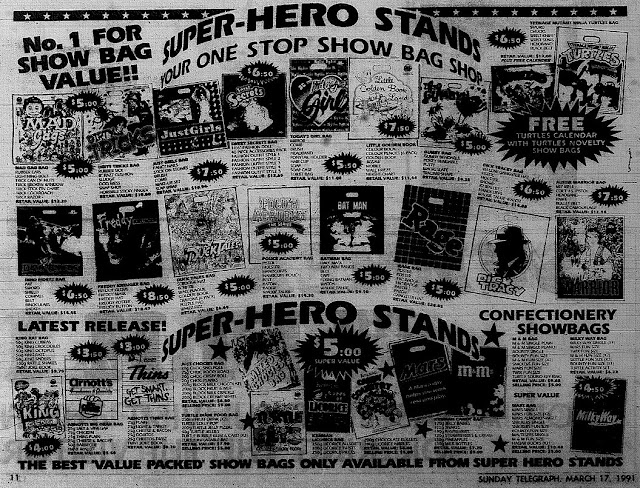 According to a report in The Sydney Morning Herald on April 3, 1991:

I thought it would be worth mentioning that 2016 will seen the return of the guest country with one of the main exhibition halls being handed over to allow for this to happen. India will be the guest country for 2016.
Posted by Fabian Amuso at 00:00 No comments:

This week, I head back to 1997, when apartments were for sale in Hordern Towers, which would ultimately form Stage 1 of the World Square development. The site itself had become partitioned off from the rest of the site, which itself had become Sydney's biggest hole in the ground following the collapse of the project in 1990. Part of Horden Towers was also to be developed into a hotel. 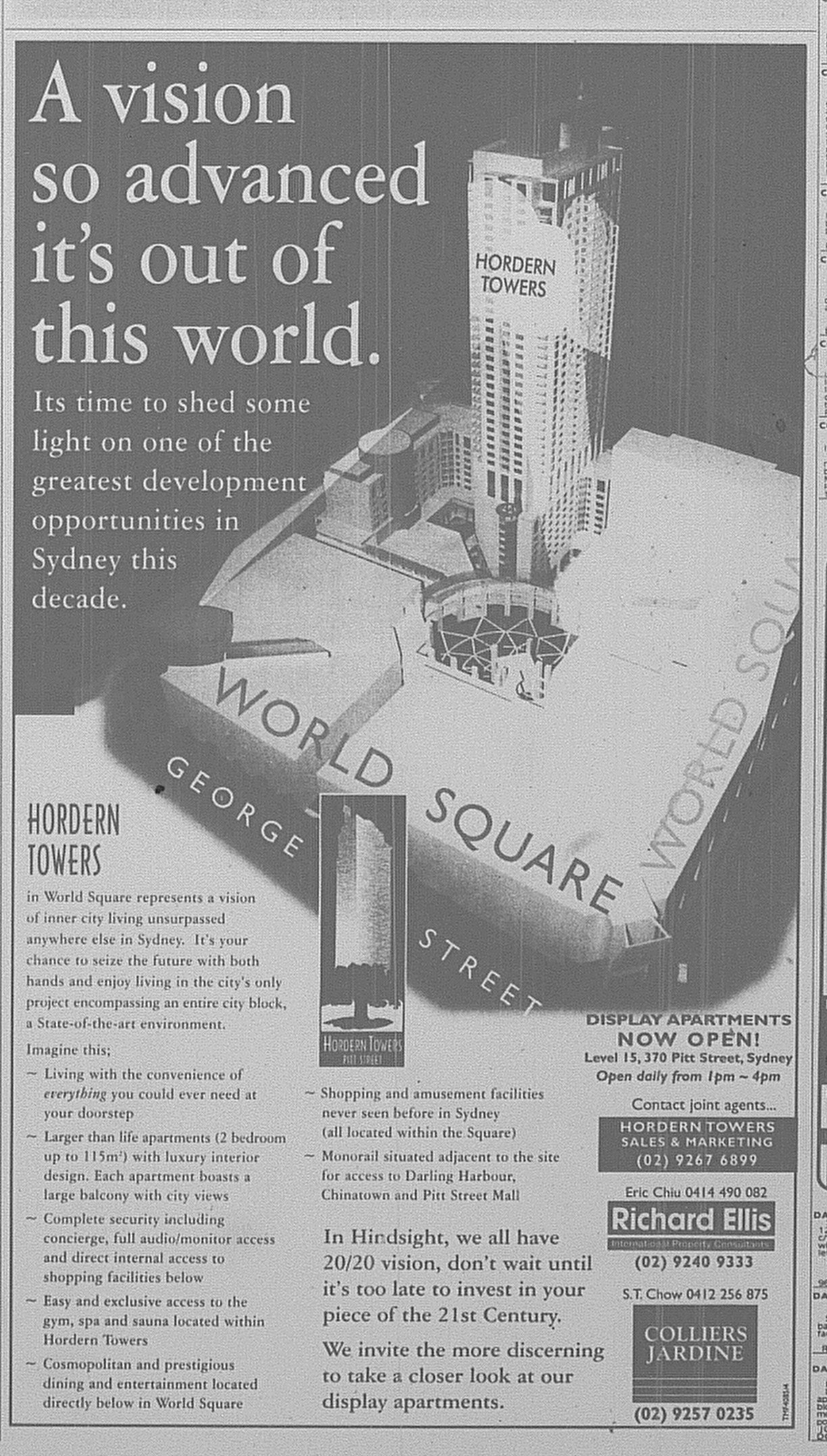 In 1973, The Daily Telegraph decided to explore some possible visions for Sydney's future based on news events of that time. For decades now, State and Commonwealth land have gradually been handed back to the public and with each handover, there is the debate of what to do.

North Head, for instance, was envisioned as being a park with tree-lined roads but there would be a lookout tower and restaurant.

The vision that could have probably been the most controversial would have been the plan to build a massive marina at Balmoral. This would also include demolition of the famous baths. Balmoral is noted for its long beach, quiet waters and picturesque setting which attracts people from far and wide, so a marina may have not been the right move for the suburb. The idea for a large marina stemmed from the concerns about access to the harbour and mooring space.

It was proposed that other sites around the harbour would also house marinas, though many of those sites have not experienced marina development in any capacity. 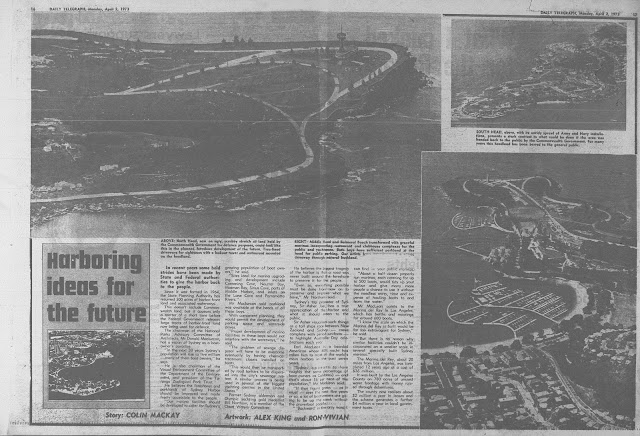 Property Advert of the Week: The Summit, Sydney (2000)

This week, I have pulled out a classic from Meriton back in the year 2000. Stage 2 sales had commenced for apartments in The Summit complex in George Street (The white building near Liverpool Street which looks as if it were built with lego. 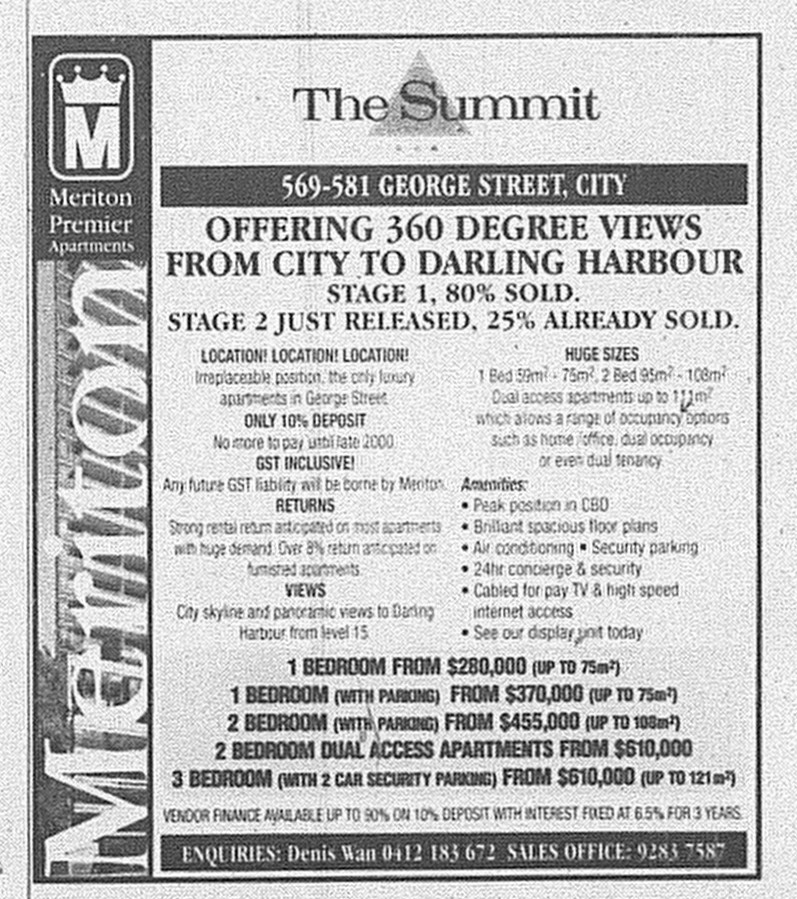