1989: Vision for the Pyrmont Peninsula

As you can see, I enjoy sharing visions for Sydney and this one focuses on a 1989 clipping from The Sunday Telegraph where a vision for the Pyrmont Peninsula and the Bays Precinct is featured. 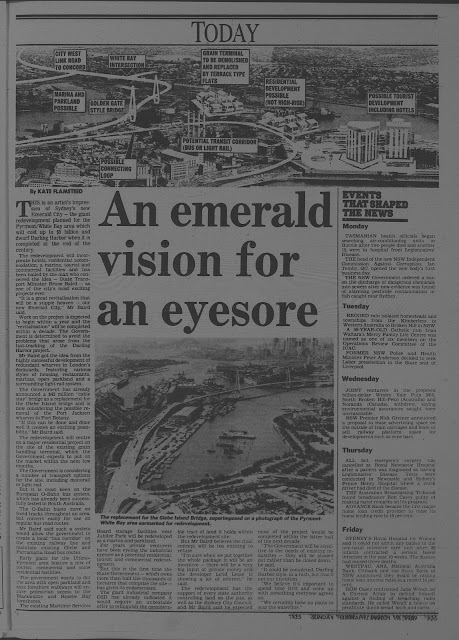 Some points of interest:

Planning is underway on the Bays Precinct which will focus on the redevelopment of the former Port at Glebe Island and the Sydney Fish Markets.
Posted by Fabian Amuso at 00:00 No comments:

This week, we head back to 1999 when Mirvac was selling apartments in the Shoremark development at St Leonards. 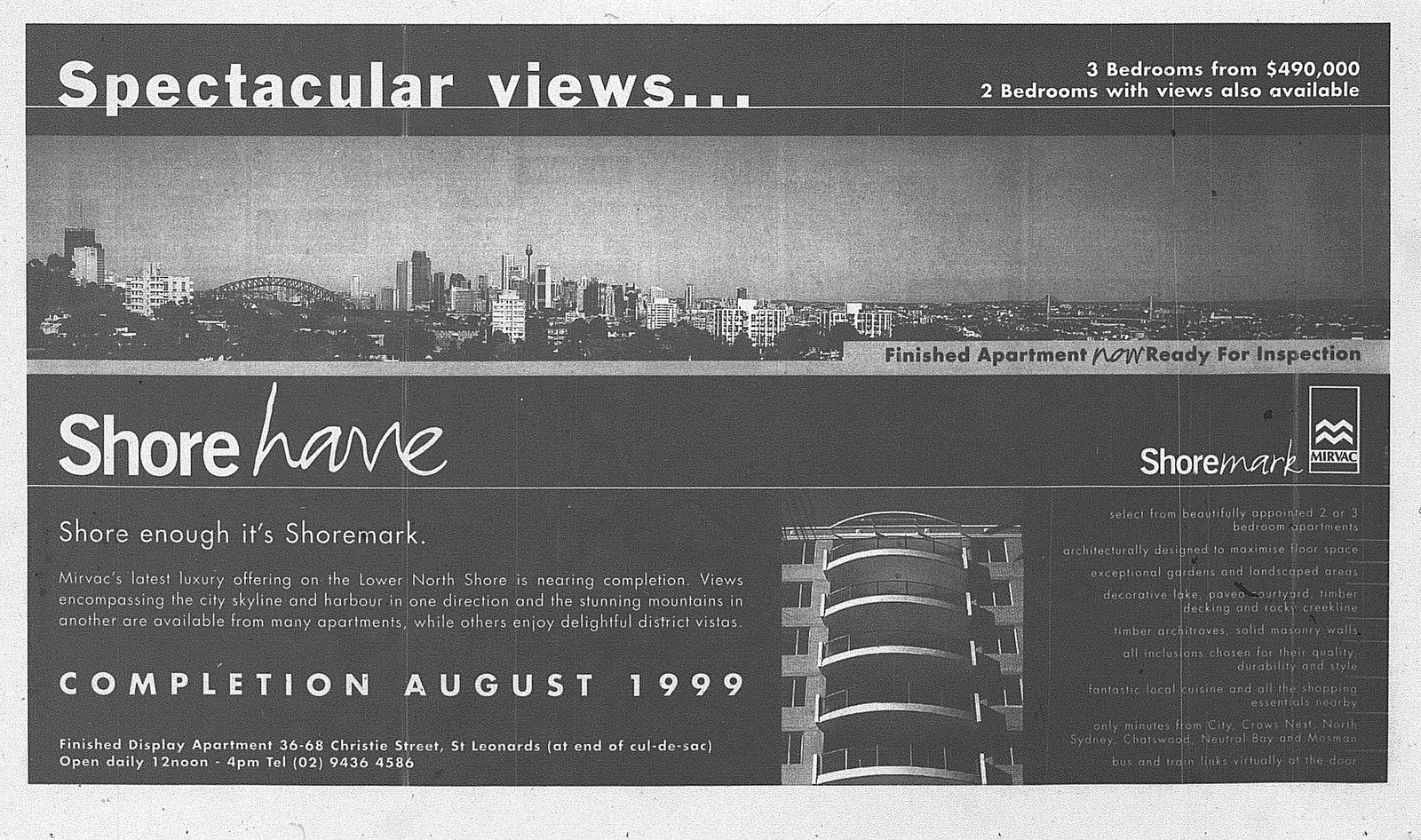 In 1986, the last of Sydney's famous double-decker buses had finally been pulled off commuter services in Sydney. But why did they get taken off?

Between 1970 and 1972, the State Government had purchased Atlentan Double Decker Buses to supplement the existing fleet of Sydney Buses, but there were several developments during that decade that would lead to the withdrawal of double-decker buses:

On May 16, 1986, the final service ran from Wynyard to Taylors Point on Sydney's Northern Beaches. 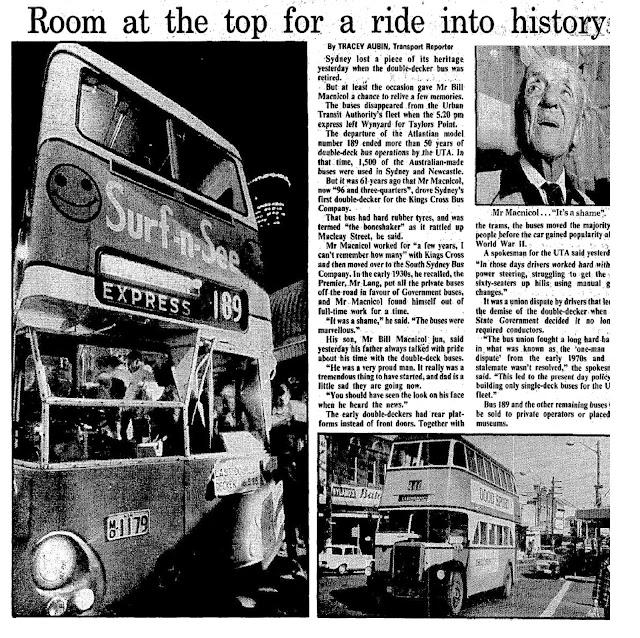 Fast forward a quarter of a century later, and the State Government began to trial the use of double deckers on the city with Busways operating the buses on the Rouse Hill to Blacktown route. A year later, Hills Bus introduced double-decker services on the M61 service from Rouse Hill to the city.

Recently, it was announced that the State Government would purchase eighty double-deckers as part of increasing capacity but also for the advantage they have in navigating through congested city streets. They don't need the room an articulated bus has, yet can carry many more passengers.

This week, I share with you a 1960 advertisement from Castle Homes. 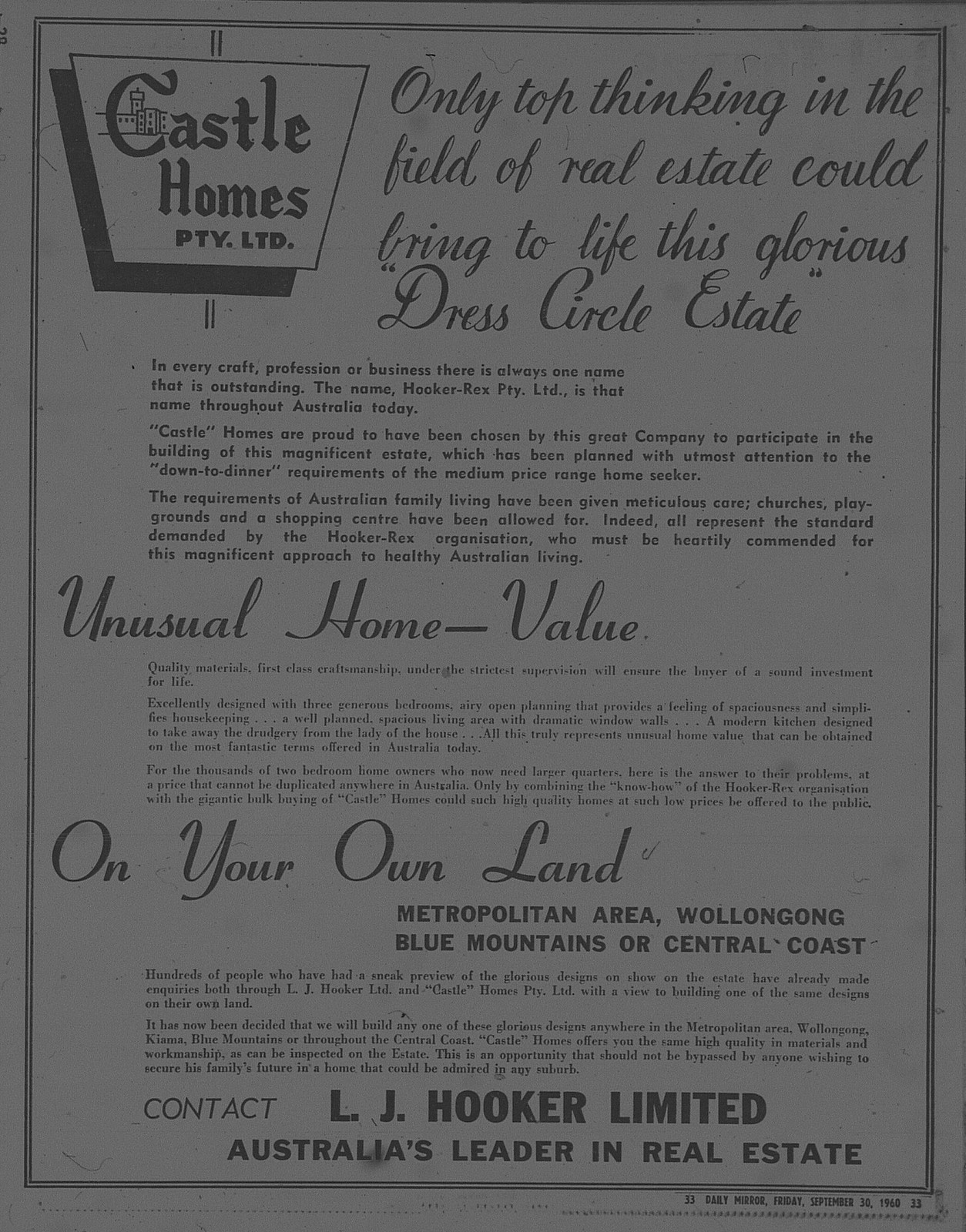 The early 1990's recession created a glut of office space in central Sydney with vacancy rates reaching 25%.  Meanwhile, Sydney City Council was encouraging people to move from the suburbs into the city to improve activity. Residential developers saw that money could be made from turning aging office blocks into upmarket apartment towers. One of the first office towers in central Sydney to be converted into an apartment tower was ESSO House. In 1993, it gained approval for Highgate, which was to be the name of the apartment tower. Crone & Associates were behind the design which included adding an extra eight levels to make the building 28 storeys or 100 metres tall. Work began that same year and was completed just one year later. 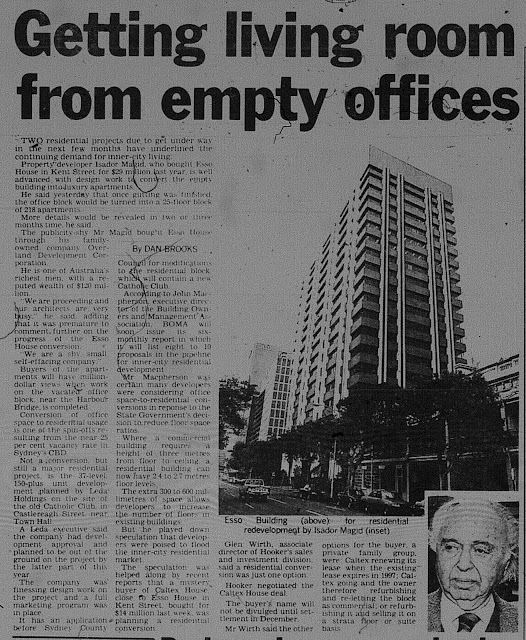 
Sales were strong for apartments despite the "quiet" marketing" 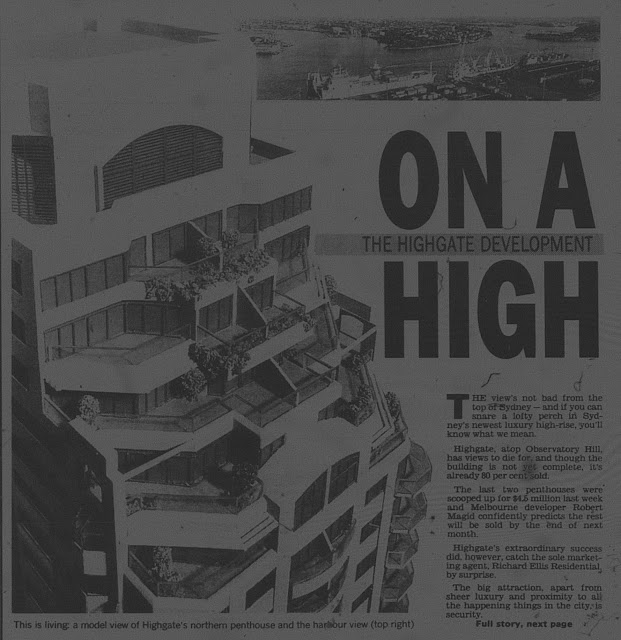 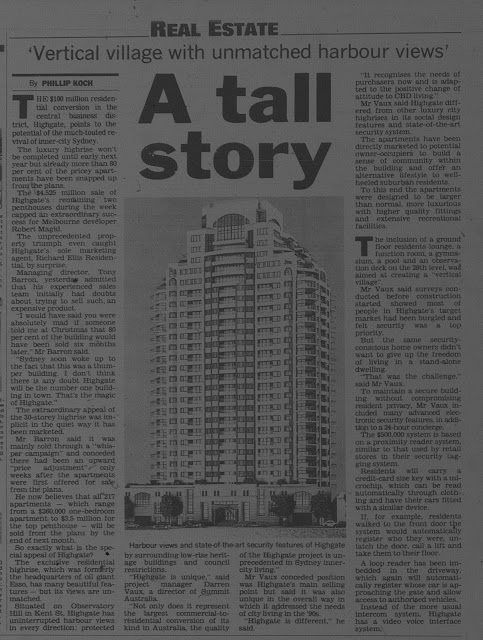 It has become of the most desirable addresses in central Sydney like its neighbours Stamford on Kent & The Observatory. This has been due to its proximity to The Rocks and the city. The views of Sydney Harbour from the units have been unparalleled, though the Barangaroo development will take out the views west. Another feature has been its facilities for residents including a gym and swimming pool and security access.

Property Advert of the Week: The Southern Cross Towers (1999)

This week, we remain in 1999 and in central Sydney. However, we head down to the southern end of the city, where Di Jones was promoting apartments in the The Souther Cross Towers at the corner of Goulburn Street and Wentworth Avenue. They say 5% is a good yield on an investment property today, but what about 7.5%. 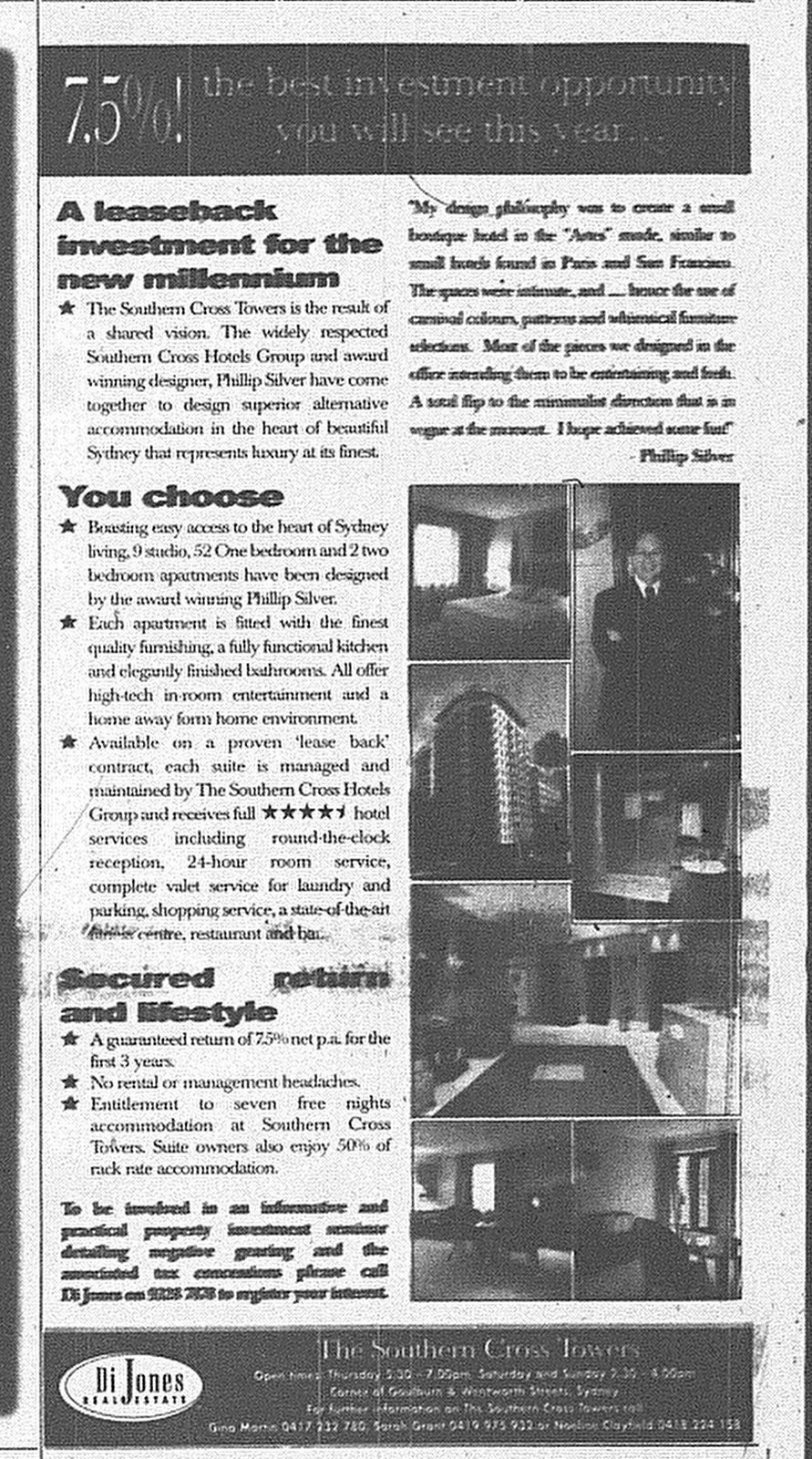 The Games of the 31st Olympiad are well underway in Rio De Janiero, Brazil. We were treated to an impressive opening ceremony on Saturday morning. This week lets relive our ceremony from when we hosted the Games of the 27th Olympiad in September 2000.

Sydney's Opening Ceremony on September 15 lasted four hours and involved more than 10 000 performers. Stockmen on Horses opened the ceremony with a procession which culminated in them forming the Olympic rings. After the VIP's and the anthem was sung, viewers were treated to the story of a young girl visiting the beach. She falls asleep and then is taken on a trip through time as the story of Australia. The young girl was Sydney school student Nikki Webster. She now runs a dance school based at Leichhardt.


The cauldron was lit by Cathy Freeman who would go on to win gold in her pet event - the 400 metre race in Athletics a week and a half later. Legends including Dawn Fraser and Betty Cuthbert were tipped as favourites by bookies to receive the honour. Fraser and Cuthert joined Shane Gould, Raylene Boyle, Shirley Strickland De La Hunty and Debbie Flintoff King in relaying the flame around Stadium Australia. However, there was an epic blunder when technical problems saw the lit cauldron stop on its ascent for four minutes.

Performers included John Farnham and Olivia Newton-John who performed a duet - "Dare to Dream". Vanessa Amorossi performed "Heroes Live Forever" while Tina Arena performed "The Flame" to welcome the Olympic Flame into the stadium. Julie Anthony with support from Human Nature performed the best ever rendition of Advance Australia Fair and for a change, both verses were sung.

10 000 Athletes from 199 countries plus 4 Individual Olympic Athletes from East Timor participated in the Parade of Athletes. As hosts, Australia marched into the stadium at the end of the parade with a team of 632 athletes, receiving a big welcome from the 110 000 assembled.

Eight former Olympic Champions from Australia were involved in the raising of the Olympic Flag.

The ceremony was broadcast on Channel Seven and this was the most watched television event in Australian History with around 11 million watching that evening.

As a bonus, why not include the Closing Ceremony as well. This had to be our biggest concert ever with a plethora of stars including Slim Dusty, Midnight Oil, Paul Hogan, Savage Garden and Kylie Minogue.

This was also the first closing ceremony where the show was taken out of the main stadium - a 20-minute fireworks finale on Sydney Harbour featuring a river of fire from the Stadium down the Parramatta River into Sydney Harbour. One million attended the display itself, which at the time was the biggest fireworks show in history. It involved five fireworks companies from around the world. The "best ever" Olympics had finished with a bang.

Sydney did set one new innovation that Beijing was happy to do for their opening ceremony in 2008 - A big fireworks finale to end off the show. They were not afraid to take out of the stadium and into the surrounding area. London also followed Sydney's lead. Melbourne did it for their Commonwealth Games in 2006.

Property Advert of the Week: Stamford on Kent (1999)

After my entry on Caltex House earlier this week, our property advertisement of the week is on the buildings reincarnation into the Stamford on Kent apartments. 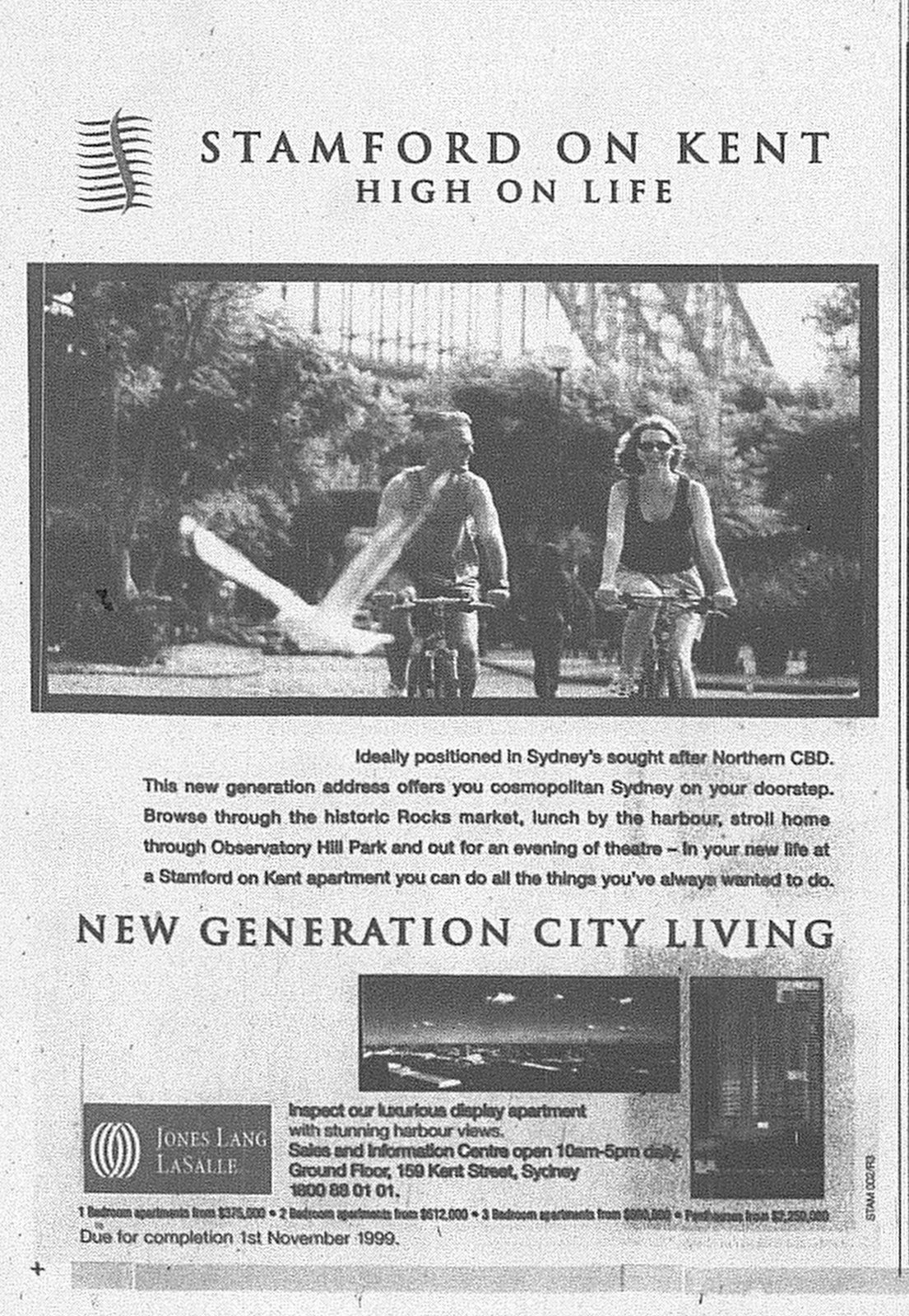 For decades, Sydney had a very strict 46 metre (150 feet) height limit for buildings in the city centre. It was implemented because it was as high as fire ladder could go. 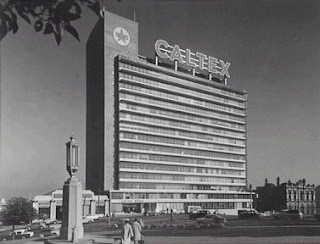 In 1957, Caltex House in Kent Street broke this height limit to become the tallest building in Sydney (and Australia). The 20 level/72 metre tower (measured from the rear laneway)  set a precedent for future high rise development in central Sydney. This was achieved through a loophole in planning policy.  The height of the building was based on the Kent Street side, and not Jenkins Lane at the rear of the building. Jenkins Lane was 12 metres lower than Kent Street.

Construction had begun at the start of the previous year and when completed was five months ahead of schedule.

The building was designed by architect Harry Nichols and was built by Civil & Civic Constructions.

Some facts of interest include:

*Australia's first all-concrete building.
*Fastest lifts in Australia at the time - It could travel 700feet in a minute. You could travel for instance from level 5 to 15 in just fifteen seconds.
*300 000 sq/feet of office space.
*First office block in Australia to be fully air-conditioned.
*14 shops at ground level.
*Capacity for 2000 workers.
*During construction, a new floor was added every 14 days, twice as fast as any building under construction at the time.

The following year, Caltex House lost the tallest building in Australia title to ICI House in Melbourne (20 storeys/84 metres). In 1962, the AMP Building would become Sydney (and Australia's) tallest building at 26 levels of 115 metres tall. 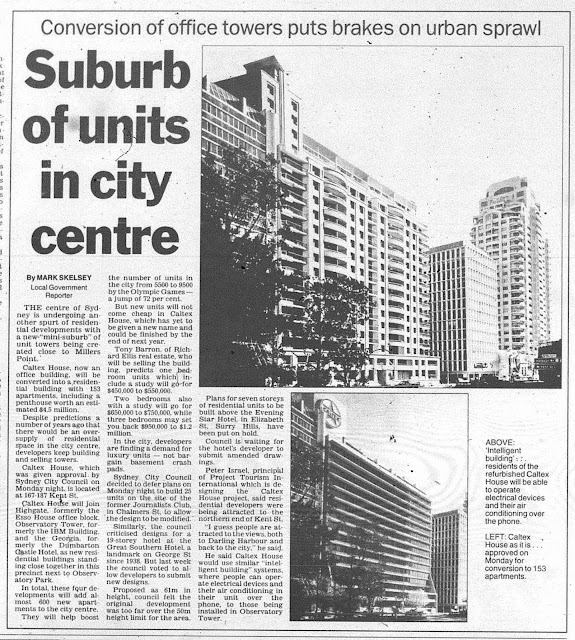 
However, in the late 1990s, the building was converted into the Stamford on Kent Apartment Tower. Approval was given in 1996, but the final design would differ. An additional eight floors were added to the tower. This was completed in 1999. 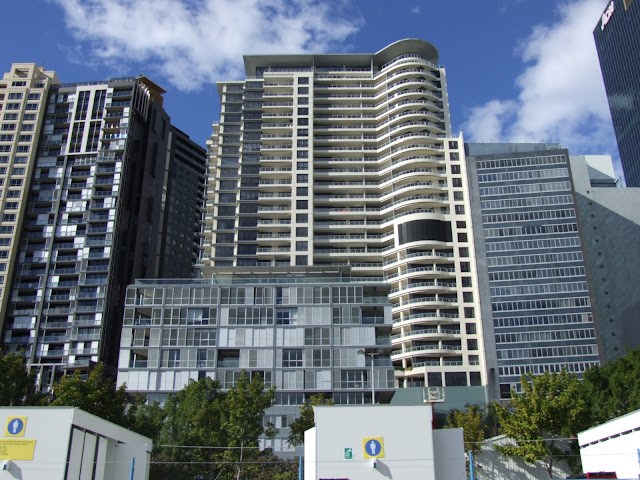 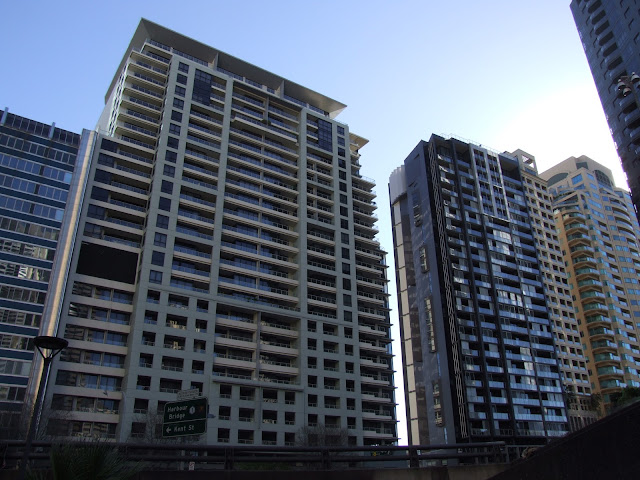 Above: Photos of the Stamford on Kent was taken by the Author (2008).
Posted by Fabian Amuso at 00:00 No comments: