As you may have noticed as of late the MSB Port Tower is being pulled down after four decades of service in controlling port traffic on Sydney Harbour.


But how did it come about? Changes to communication with ships in the harbour facilitated the need but also a tower would give greater visibility when compared to Circular Quay where they were based at the time of its announcement in July 1970. It was hoped to be completed in 1971 but did not open until 1974.

When completed the structure raised 87 metres above sea level.

The National Trust opposed its demolition as it was a reminder of the harbour's past as a trading port and had listed the structure on its register in 2010.

And where do I stand on its demolition? For starters, it was not worthy of heritage listing as it as not in an architectural sense worth retaining. Does it fit in with the surroundings? No. It towers over the terraces of Millers Point and the park.

But there was an opportunity lost to redevelop it. I suggested at a Barangaroo Community Consultation Forum in Caringbah in 2010 to turn it into an observation tower. Peter Holmes-A-Court who was (quietly) seated at my table liked the idea and suggested a staircase be built on its exterior. If no use could be found, then pull it down.

Our property advertisement of the Week takes us to Liberty Grove, which was one of Sydney's newest suburbs back in 1999. 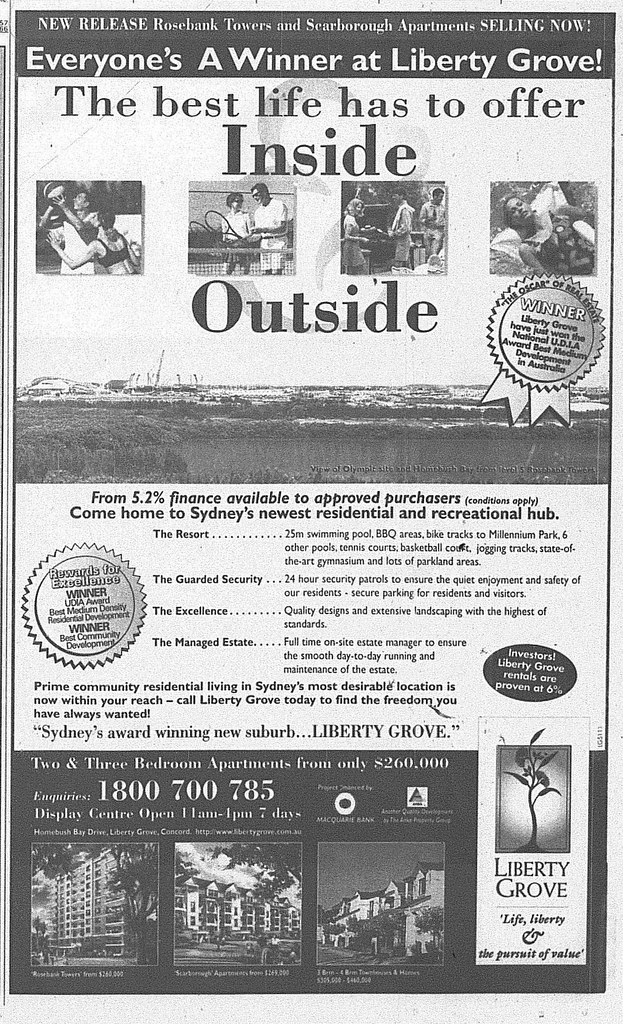 I am currently in the process of giving this site an overhaul. Please be patient as changes are made.
Posted by Fabian Amuso at 11:08 No comments:

1998: How Sydney Tower got its signage

AMP was one of the official sponsors of the Sydney 2000 Olympic Games. As part of the Olympic Games, AMP wanted to erect its logo along with an Olympic Sign.

This was not popular with some Sydneysiders given the iconic nature of the building. In 1998, the AMP signage went up. However, AMP went for Olympic Artworks designed by Dominique Sutton. I remember this well from the TV news reports at the time. I recall swimmer Ian Thorpe and Seven Nightly News Sports Presenter (and former Olympian) Neil Brooks standing at the top of the tower alongside the sculptures.

The sculptures remained atop the tower until 2003 when they were relocated to Sydney Olympic Park. In the early 2000's Westfield purchased Centrepoint from AMP and this included Sydney Tower itself. In 2011, Westfield was given the approval to erect its logo in place of AMP atop the tower.

I actually remember when Forest Ridge at Hurstville went up in 2001. From memory, the site was once part of Dominelli Ford, which was directly across from the main dealership, before being demolished several years ago. Here is an advertisement promoting sales of apartments in the building from 2001. Sadly its now lost in the concrete jungle which has grown in spurts over the past two decades near to King Georges Road. 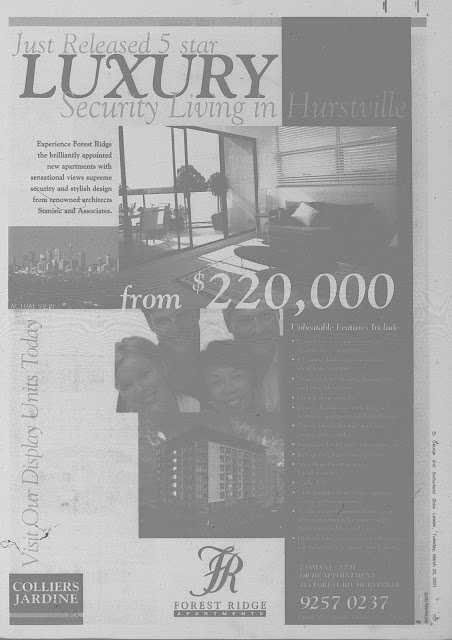 To our followers from Kareela, find out below how your suburb was gazetted and even why its streets got their names. The suburb was developed by Stocks and Holdings.

Property Advert of the Week: Newington (1999)

Yes, I have posted one advertisement promoting apartments for sale at Newington, but this one from 1999 is nice to post as well. 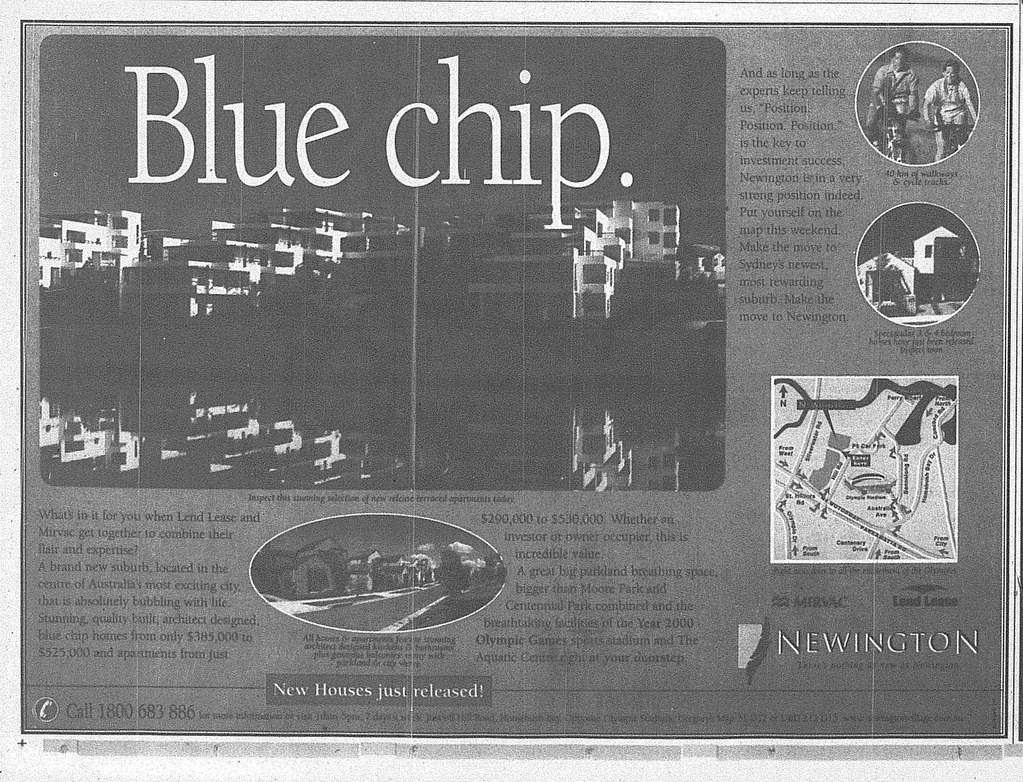 
On the back of Bankstown Square opening in 1966 and Roselands the year before, the emerging Westfield Development Corporation (Westfield Group)  needed to step up in what their centres offered to Sydney shoppers.

Westfield had centres at Hornsby, Blacktown, Eastwood, Baulkham Hills and Dee Why. Except for Hornsby, the other centres are no longer managed by Westfield.

The centre was known as Westfield Burwood Shoppingtown and was the first centre to carry the famous Westfield logo.

Below are some assorted advertisements to promote its opening sourced from the major Sydney newspapers at the time of opening. 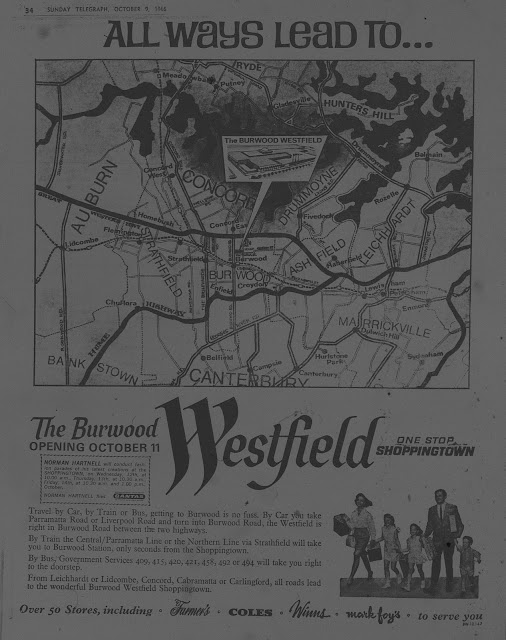 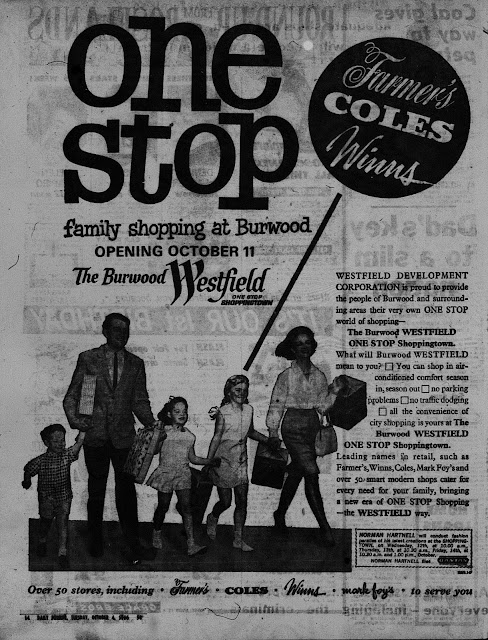 An advertisement for Farmers: 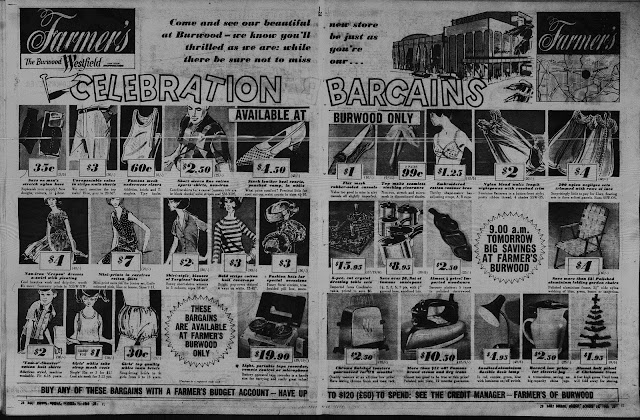 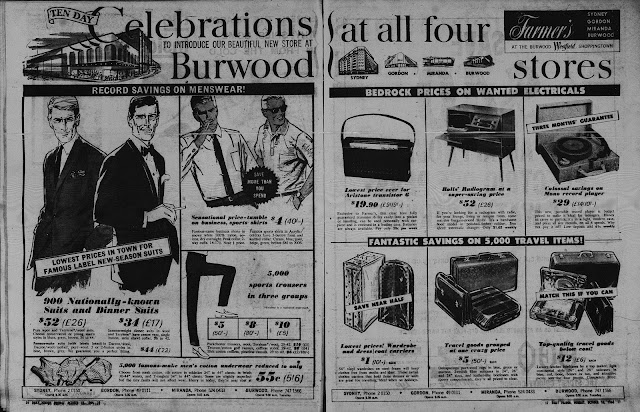 And one for Coles. 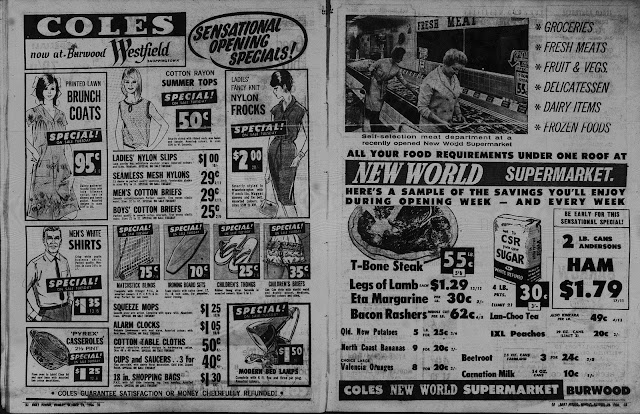 None of the original centre remains today. As part of the redevelopment of Westfield Burwood, the entire centre was demolished and rebuilt from scratch during 1999 and was reopened to the public in 2000. It now has 250 shops. Coles remains but Farmers (which became Myer, then Grace Bros and reverted to Myer) left in 2007 and was replaced by David Jones.

Finally, for those of you on Facebook, there is a Facebook Page (Old Westfield Shoppingtown Burwood Mermories) dedicated to the original Westfield complex itself with photos and tales.

This advertisement is for a land release in Belrose Heights, dating to February 1966. It was being urged to buy before the opening of the Roseville Bridge.

In late 1987, plans were unveiled by CRI for a major development at Mascot, near the Domestic Terminal complex. The development would include an 11 storey hotel with a retail complex, plus new catering facilities for Qantas and major airlines. Bourke Street. would be extended through the area. 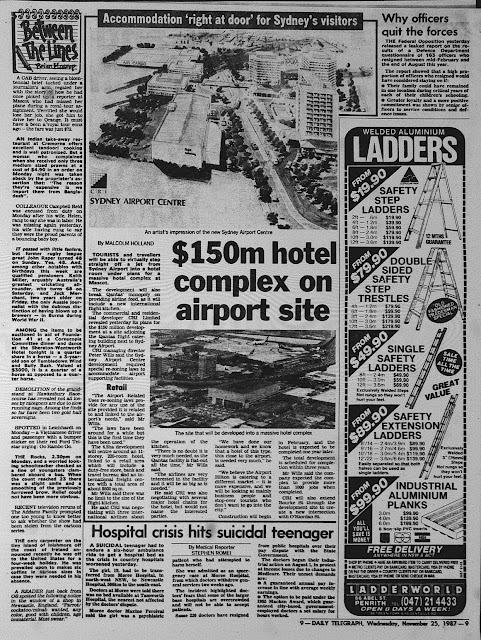 The hotel was built and is currently the Holiday Inn Sydney Airport. In recent years, the Adina Apartment Hotel has opened alongside it. Qantas ended up basing their headquarters there. The key decisions that Qantas have made in recent decades have been made right at Mascot, not a boardroom in central Sydney.

This combined with the decision to construct Mascot Railway Station as part of the Airport Line (opened 2000) has helped establish it as a centre of business. It's proximity to rail and to the city also has aided in the establishment as a residential hub. Mascot is also regarded as part of Sydney's global arc of business stretching from Sydney Airport north to the Sydney CBD and northwest to Chatswood and North Ryde.

Below are two photos of the Qantas Headquarters (Photos taken by the Author). 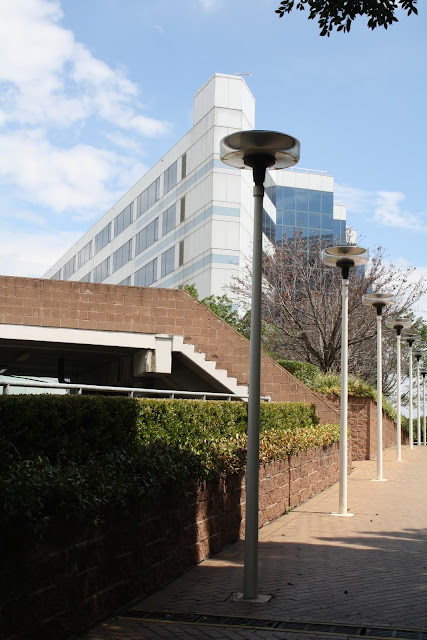 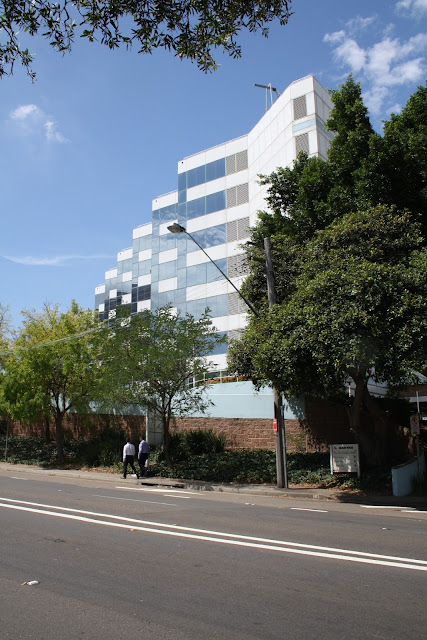 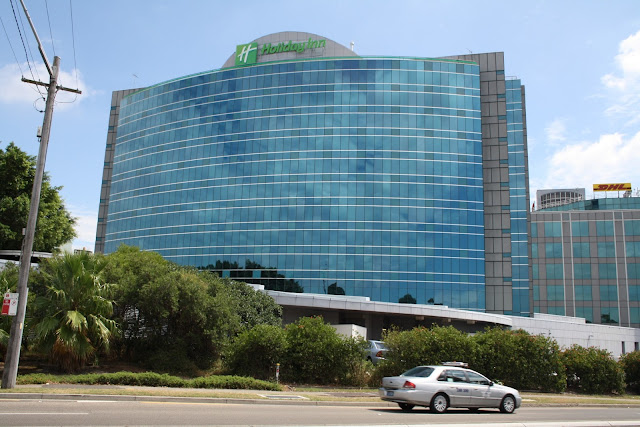 And finally, two photos of the area around Mascot Station in 2011 (Photos taken by the Author). 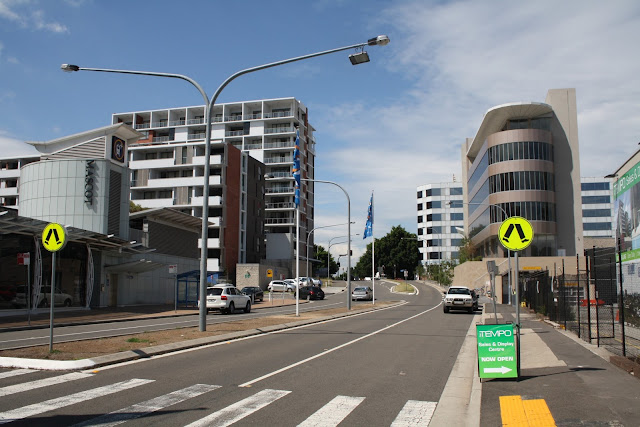 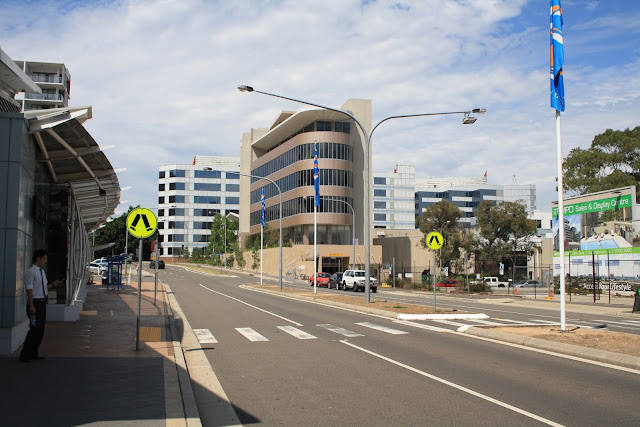 This advertisement was featured in the February 12 1966 edition of The Daily Telegraph, where two thousand pounds bought you a block of land at where I believe is Camelot Court, Carlingford.

And just two days before we embraced the dollars and cents!!!

In today's money, this was equivalent to around $50 000 according to the RBA Inflation Calculator. 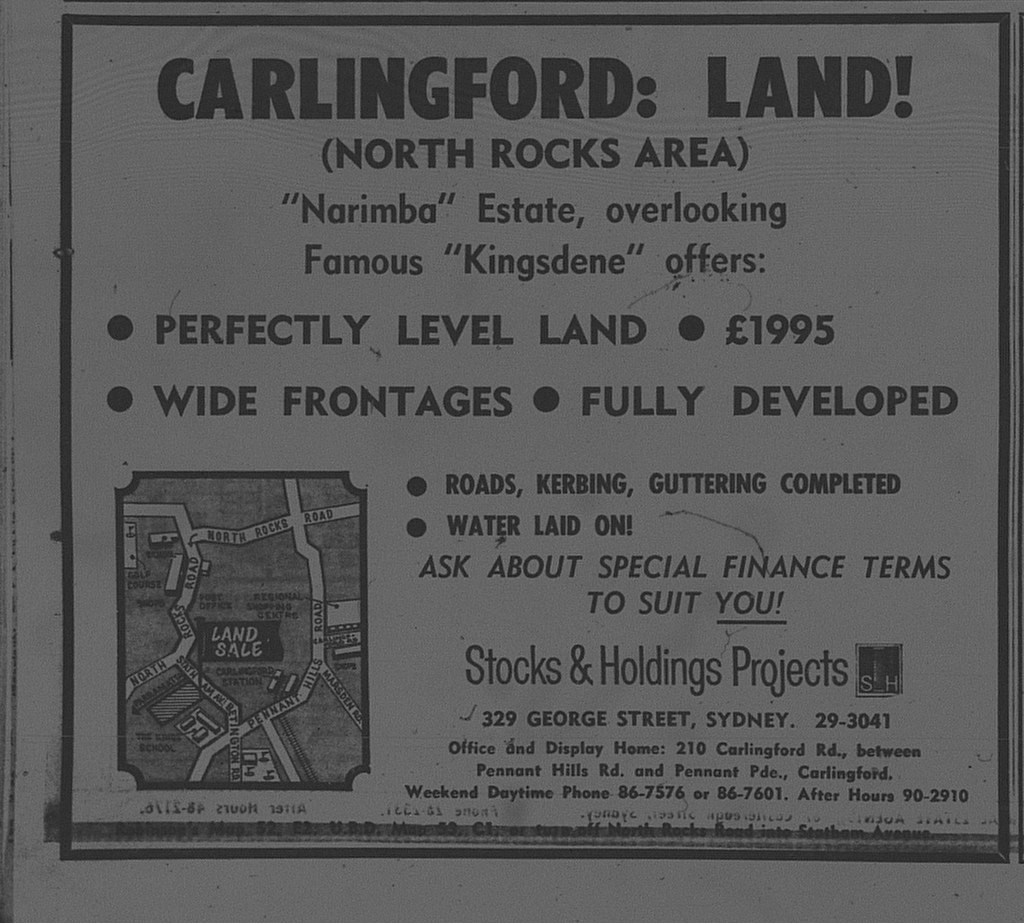