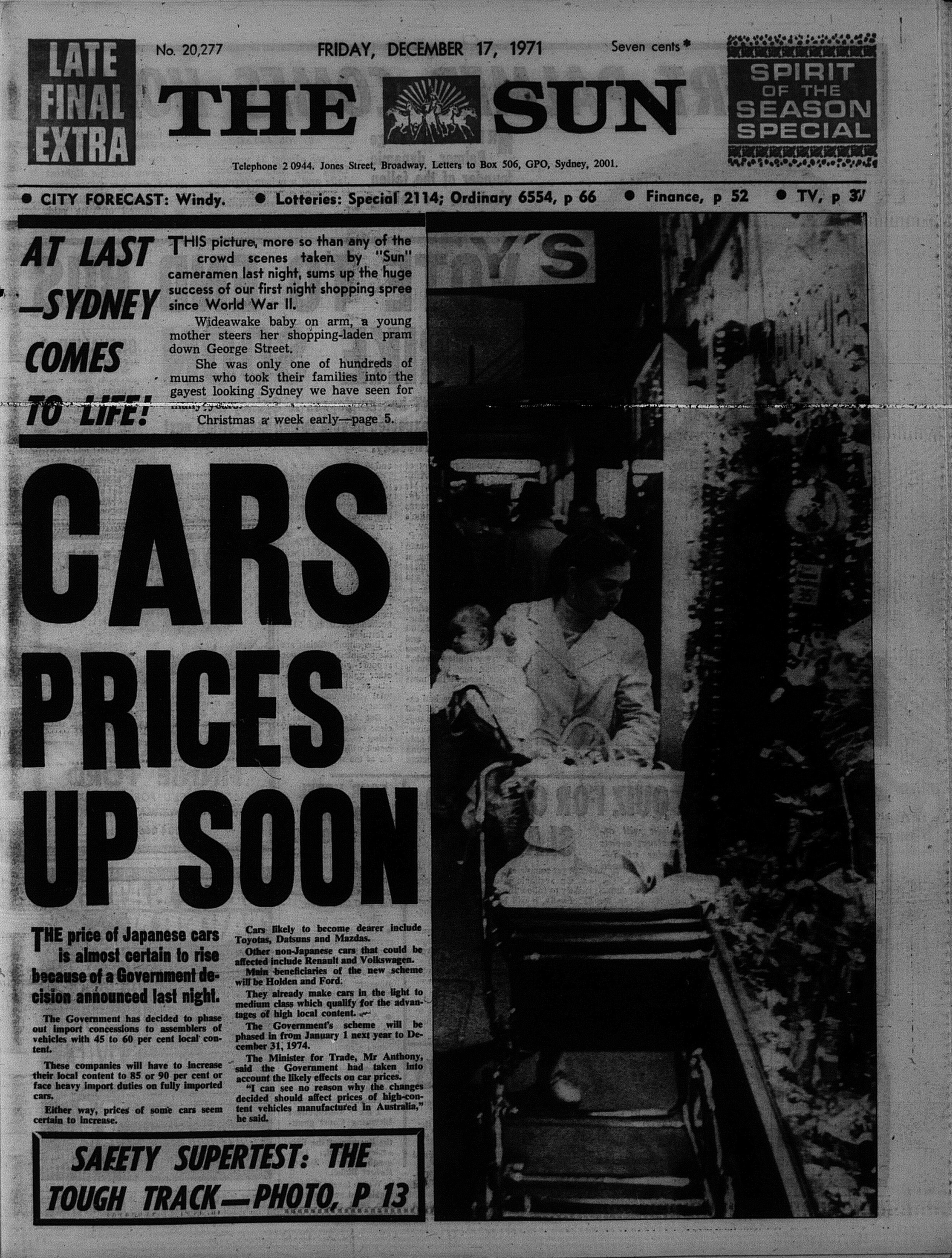 In June, I shared an entry on the introduction of Thursday Night Shopping in Sydney in 1971. It was based on the material I had from the morning newspapers - The Daily Telegraph and The Sydney Morning Herald.

Given the interest in the entry, I decided to search for more content on this topic, collecting articles from the afternoon newspapers - The Daily Mirror and The Sun.

Below are clippings of interest 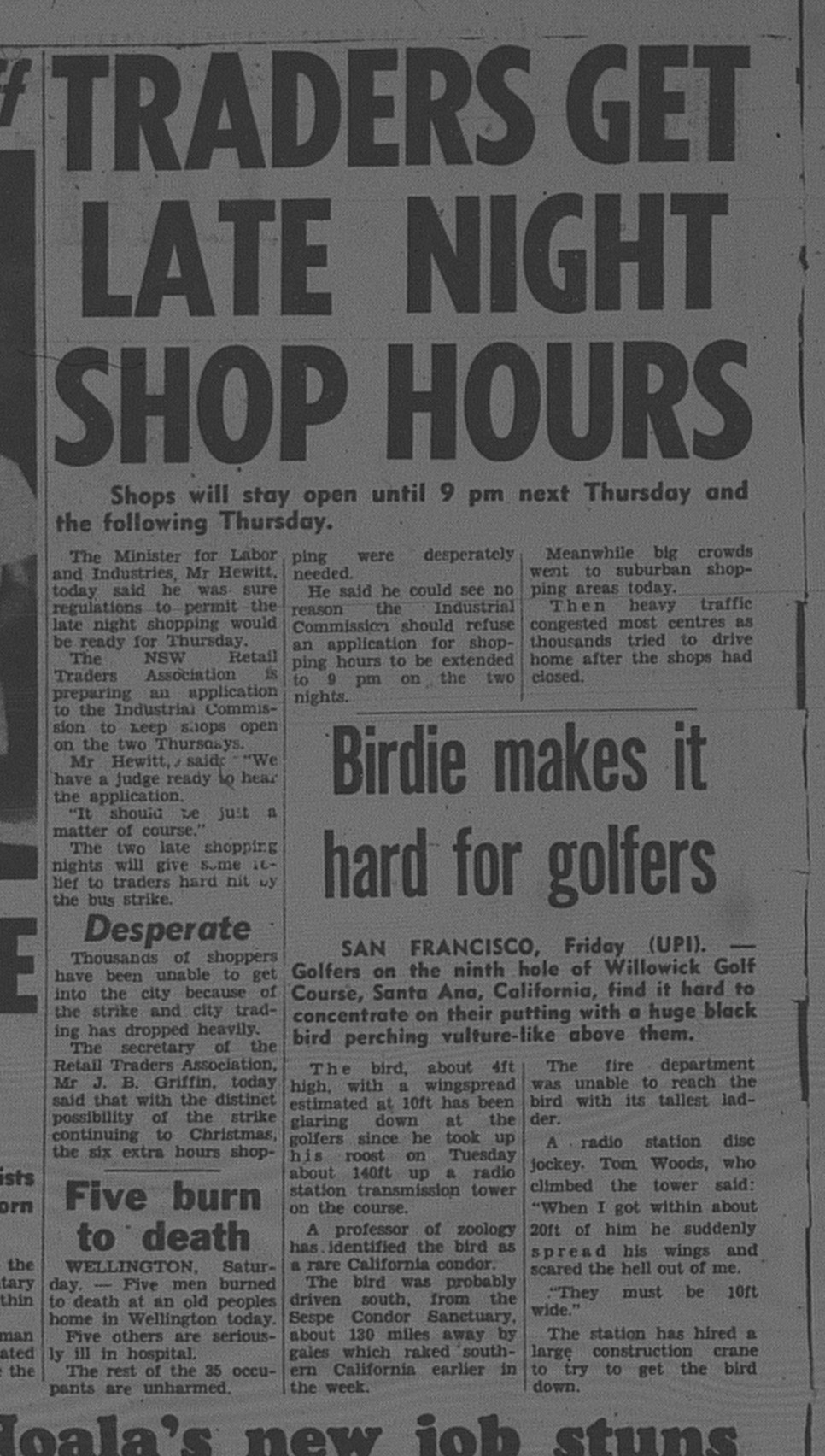 To encourage shoppers to travel into the city, extra ferries, extra carriages on train services and extended trading hours for carparks were provided. This gave shoppers a chance to avoid the bedlam on city streets as reported in the earlier entry. 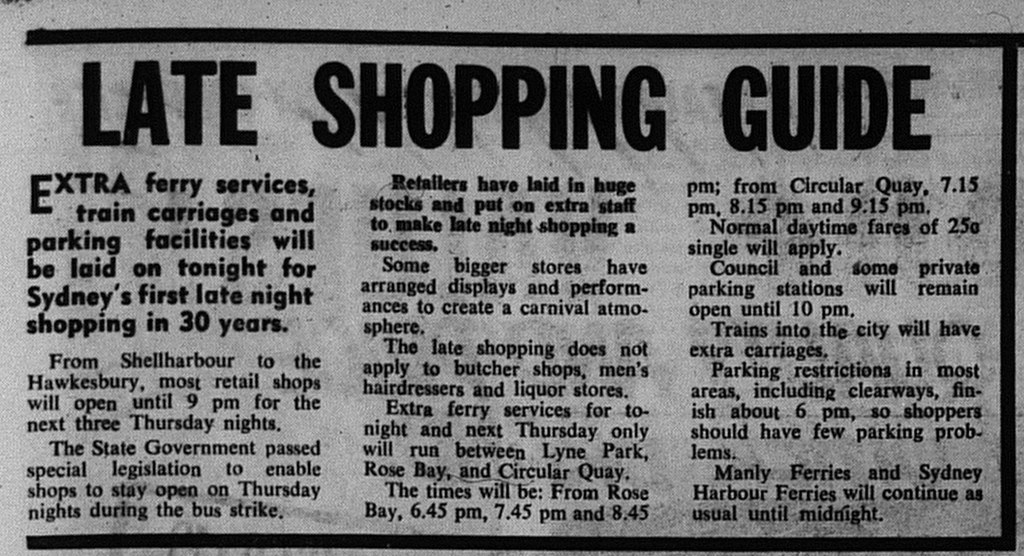 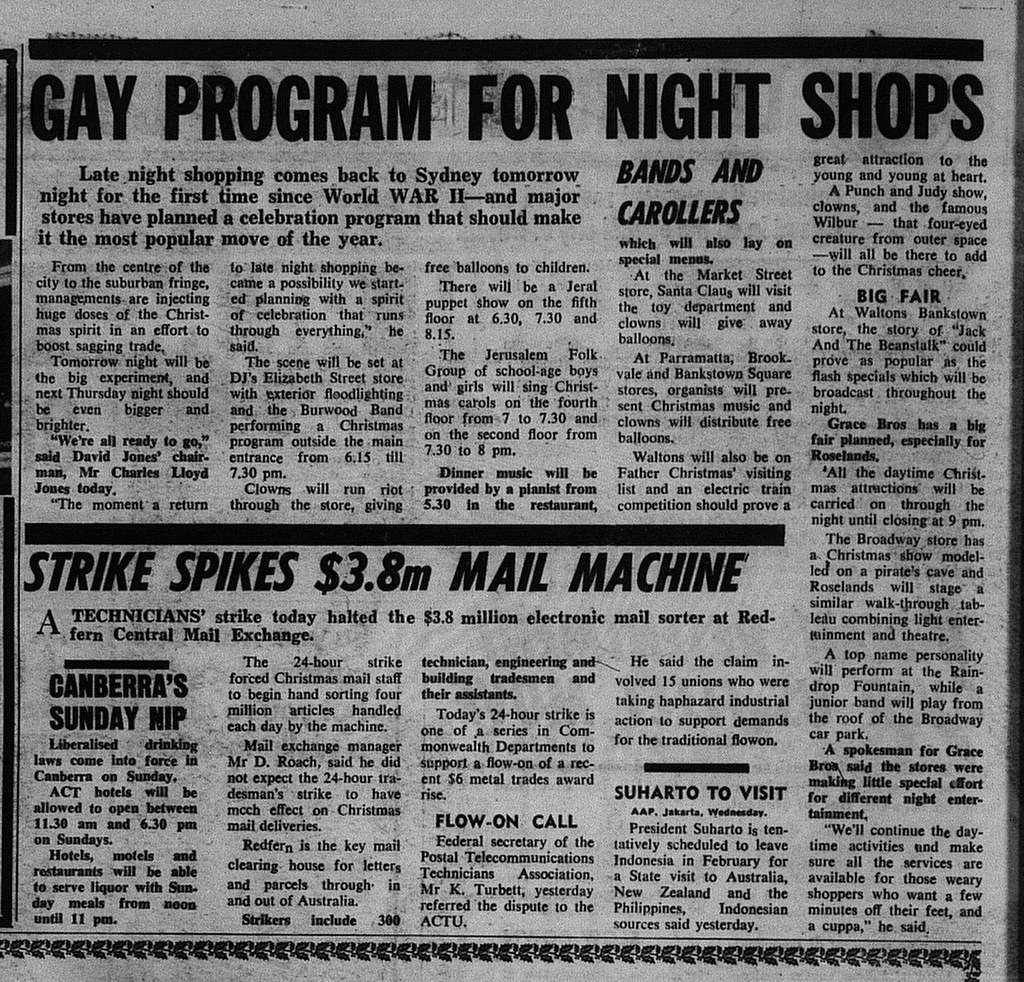 Below is an advertisement for the Dunbar Park Estate at Marsfield which was developed by Mirvac in the mid 1980's. 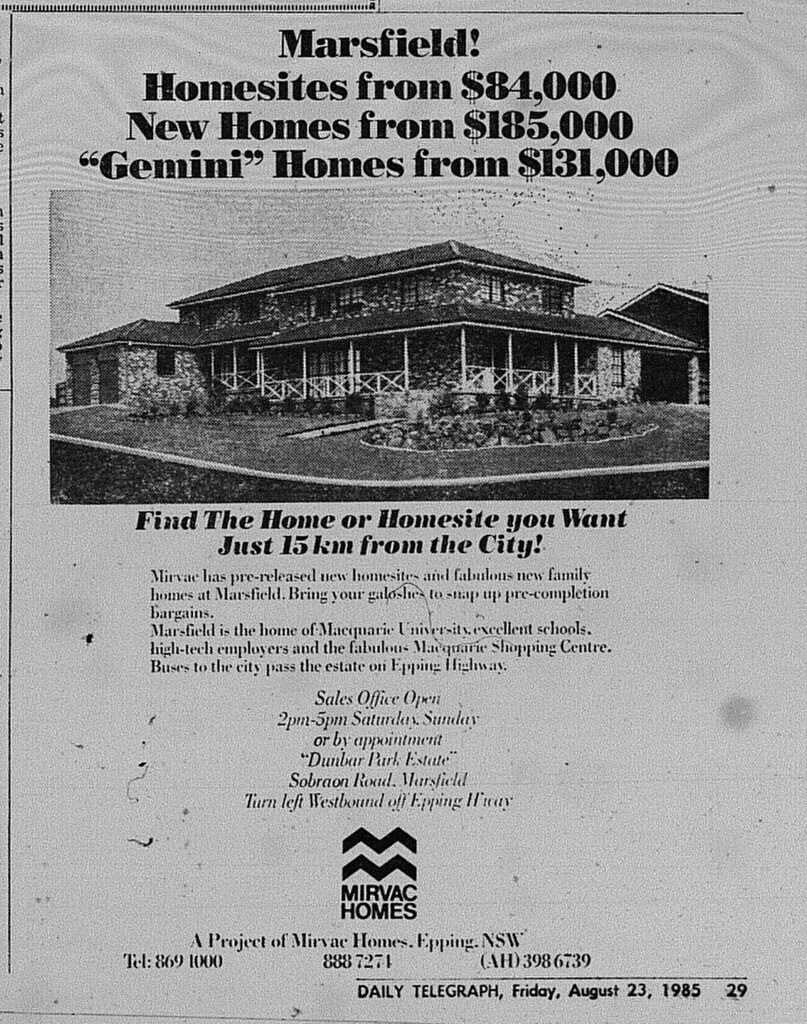 The estate was named after Dunbar Park which is located off Sobraon Road, Marsfield. The estate does have streets named after Alan Bond, John Lexcen & John Bertrand who were behind the America's Cup Victory for Australia II in 1983.
Posted by Fabian Amuso at 00:00 No comments:

1987: CBD-1 - The tallest building ever proposed for Sydney 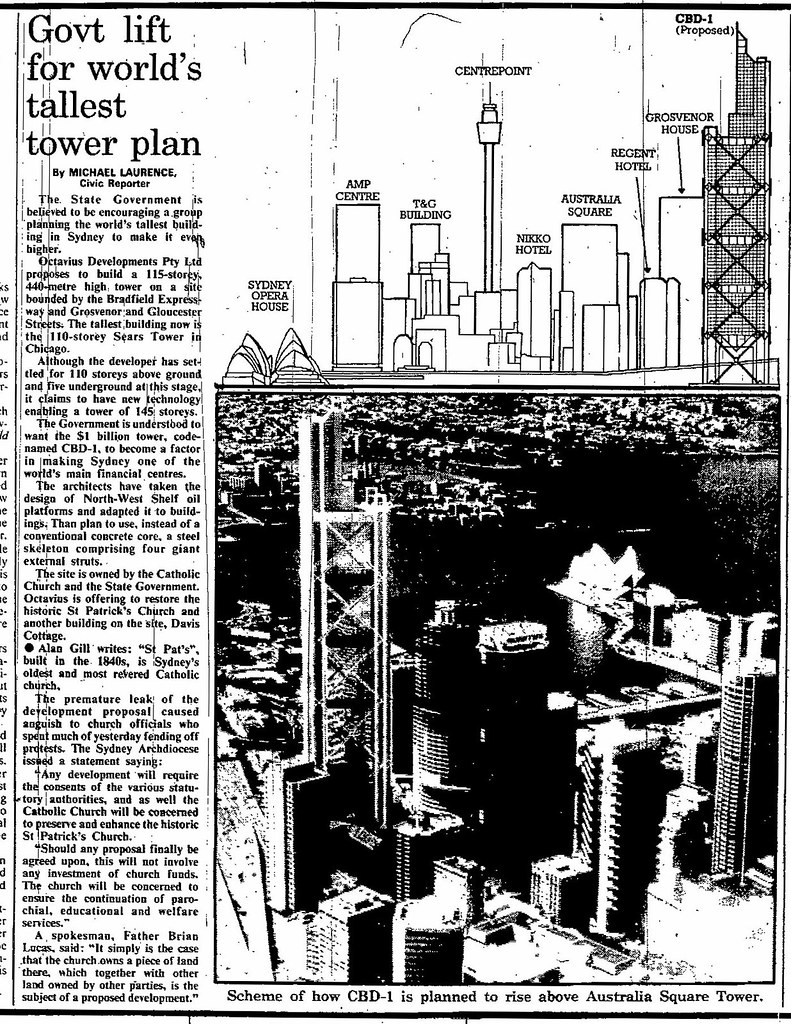 
Sydney is certainly building upwards in 2018. Some might feel that the towers proposed for Central Sydney might appear too tall, but in 1987 Octavius Developments proposed what would have been at the time, the world's tallest building in Sydney. 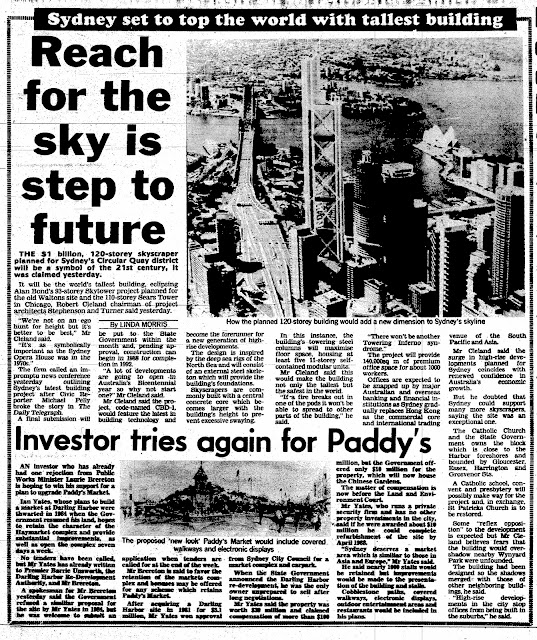 The site is where the Cove Apartments is located (Harrington Street) was to host a office tower 445 metres tall. This is five metres taller than the Wills Tower in Chicago, which was 440 metres tall. CBD-1 would beat the record by five metres.

The building was to accommodate 11 000 workers over 95 levels with approximately 1500 car parking spaces underground.

The modular design of the tower allowed for a possible increase from 95 to 150 levels in the future. St Patricks Church would be restored and a new city park would be created on the block. 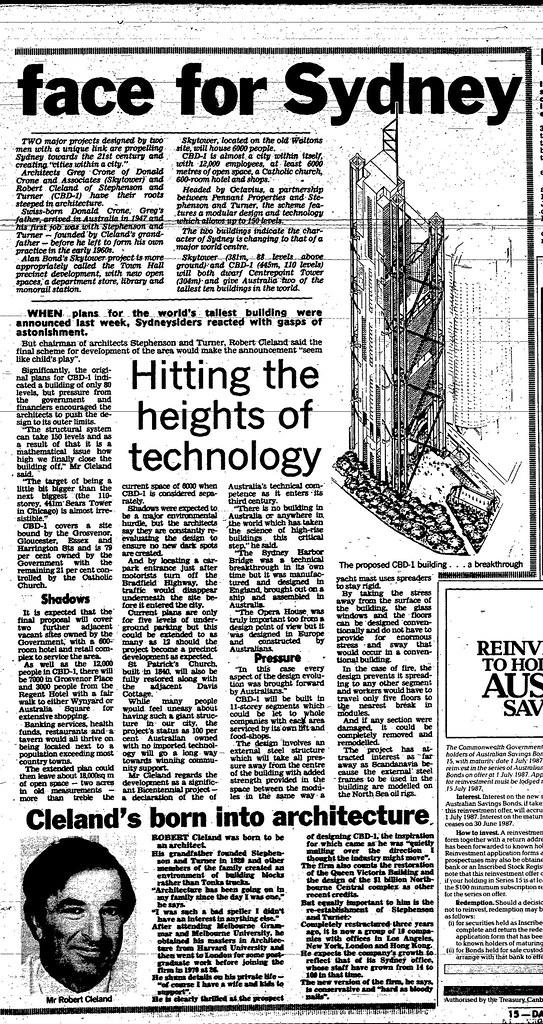 In the end this was a pipe dream despite the talk. This disappeared as quickly as it appeared. While The Sydney Morning Herald reported on June 24, 1987 that the State Government was prepared to support Octavius Developments (even increase the height of the tower), it decided review building heights for city buildings. In August 1987, it was reported by The Sydney Morning Herald that Planning Minister Bob Carr was going to review city building height limits. The Department of Public Works had raised concerns about overshadowing and loss of the urban fabric. Formal building height limits were not imposed until 1995 in central Sydney.

Meanwhile the Federal of Department of Transport had raised its own concerns over building heights, citing concerns over the proposed Skytower to be built by the Bond Corporation on the former Waltons Site at Town Hall. It claimed that towers over 305 metres in height can disrupt air traffic, especially in emergencies.

Until Cove Apartments rose from the site in 2002-03, the site itself went no development until the end of the decade. Several highriae apartment schemes were proposed but failed.

Below is an advertisement from Archer Homes dating back to 1965. 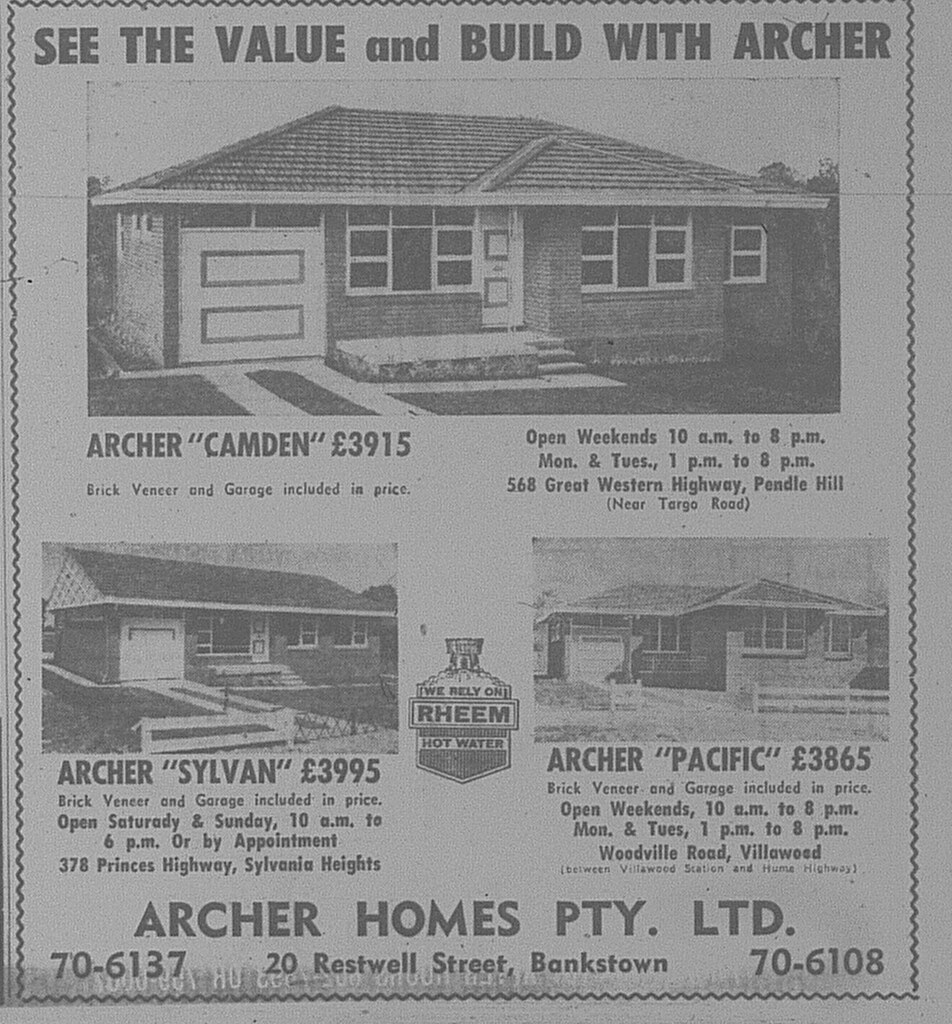 1982: The changing face of Circular Quay

Only two decades after the completion of the AMP Building and the first wave of development around Circular Quay, the area was to undergo a significant change as this feature report published in The Sydney Morning Herald in July 1982 shows.

From left to right, what was the outcome?


The construction of the above developments would not be completed for a decade (or at East Circular Quay, a decade and a half). This wave of development would shape Circular Quay for over a generation.

The demolition of Goldfields House (2017-18) and the AMP Quay Quarter redevelopment is ushering in a new era for Circular Quay. There are also towers either under construction or proposed for the block bounded by Alfred, George, Bridge and Pitt Street's which will transform that section of the city.

Below is an advertisement by Sutherland Council for the sale of 11 home sites at Sylvania Heights dating from 1970. The home sites are located on The Esplanade. 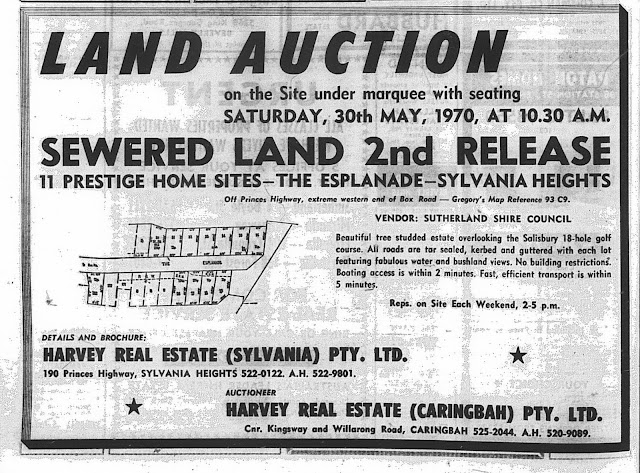 1958: Plans for the AMP Building are unveiled.

The AMP Building at Circular Quay (1962) is regarded as the first major skyscraper built in Sydney. I found renderings that were published on Page 1 of The Sydney Morning Herald on October 21, 1958.

The notable difference in the renderings is that the plant room which we see atop of the tower today did not feature, though the article mentions that the final height to the top of the lift shaft at 370 feet (main building was projected to be 347 feet tall).  It was envisioned that the new building would cater for the growth of the company up to the year 2000. Projected cost was five million pounds ($10 million).

Keep in mind that a decade later, plans were already underway for a second tower which would become the AMP Centre, which was completed in 1976.

The AMP Building is notable for the precdent that it set for highrise development in Sydney and Australia: 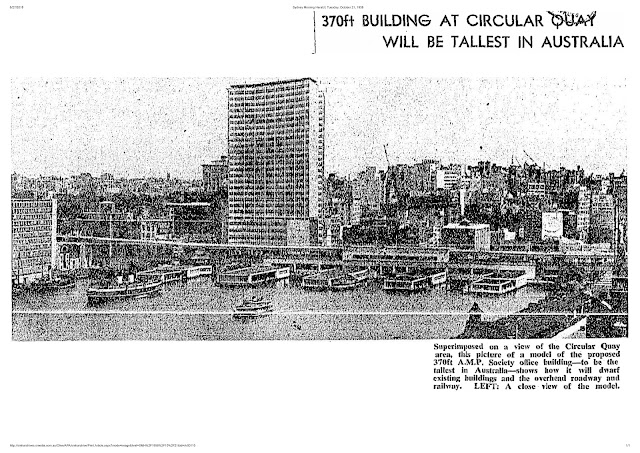 As part of AMP's Quay Precinct development, the AMP Building will undergo renewal works which will include the return of some of the lost features of the tower. The major renewal works will occur in its interiors with a major upgrade of office space to provide premium space for tenants. This is projected to commence in 2020. Changes will respect its heritage status.

It should hopefully be completed by its 60th birthday in 2022.
Posted by Fabian Amuso at 00:00 No comments:

Below is a 1972 advertisement by Classic Projects for the "Santa Barbara Gardens" complex at Yagoona. You can also view how it appears from the street on Google Earth. 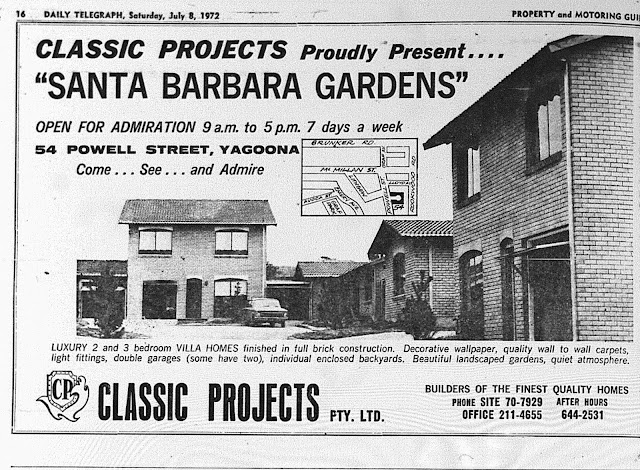