This week's advert is for a three storey walk-up apartment complex known as Kimberley Court at Sans Souci. The advertisement does list as being at Ramsgate, but today it is in the suburb of Sans Souci.

I do walk past the complex once a week and it's still there. The units started at $14 750 which according to the RBA Inflation Calculator would be about $156 000 in today's money. I did some research to see how much a unit would sell for. In December last year, one apartment sold for $547 000. 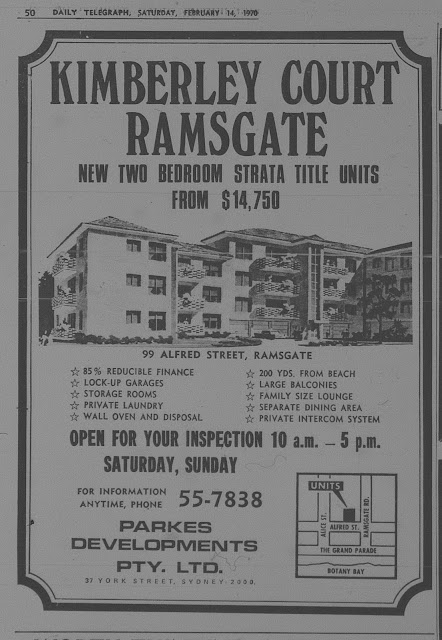 A photo and short article from 1969 documenting progress on the new International Terminal Building at Sydney Airport.

Property Advert of the Week: The Sanctuary, Voyager Point (1999)

This week we trek to Voyager Point. I remember in 1998-1999 they were playing regular television adverts encouraging one to move to this wonderful part of the Georges River. All that in reach of East Hills Station (just cross the footbridge over the river). Starting price may you ask? $190 000. 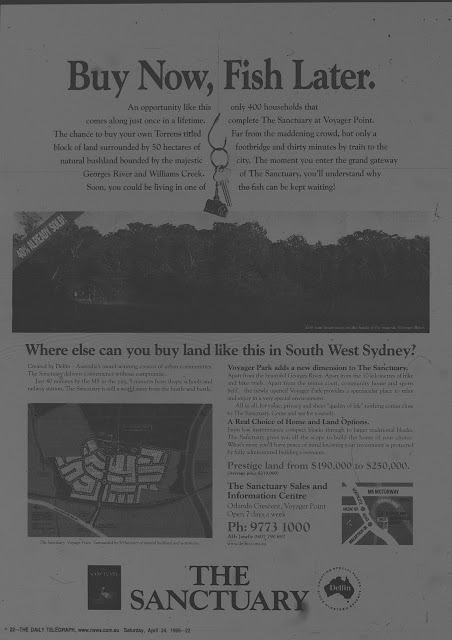 A photo I took in mid 2003 of Chifley Tower as seen from Phillip Street. The crane (at right) is for DB Place which was in the early stages of construction. The demolition of the buildings that originally occupied the site had revealed a view that one would normally not have and unlikely to ever happen again. 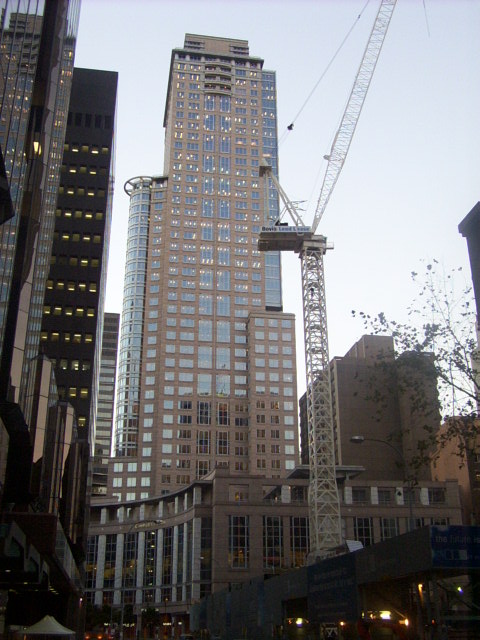 Posted by Fabian Amuso at 18:57 No comments:

As Sydneysiders know, Wynyard is one of Sydney's busiest railway stations and has been getting busier by the year. In the early 1970's, the footpaths in streets around the station were getting congested and it was proposed that double-decker walkways could be the answer. 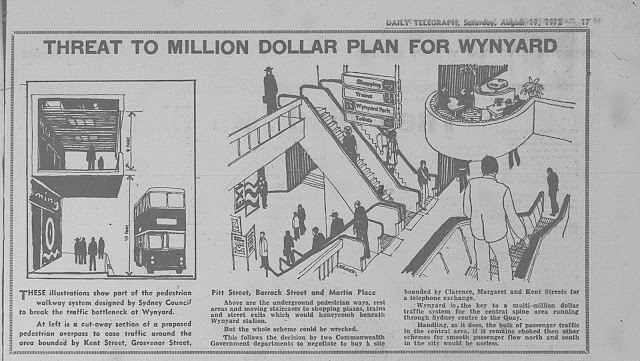 There were also plans to provide underground retail complexes that would link the station. The Hunter Connection when completed about a decade later, would include a link along with the Metcentre. The render above shows an artists impression of the retail complex that would be above the concourse of the station. That did not eventuate for two decades.

Also, it is mentioned that the scheme could be "wrecked" due to plans for a Telephone Exchange in the block bounded by Erskine, Kent, Margaret & Clarence Streets. The Exchange did get built, closer to Erskine Street and a walkway was built through to Kent Street, minus the retail (apart from one shopfront at the Kent Street end, and one small space under Clarence Street.

That is now forming the new Wynyard Walk which will link the station with Barangaroo.

Here is a rare advert by Meriton Apartments from the 1980's that I have scanned. It is for a three level walk up apartment development at Blacktown simply known as 26 Mantakas Street. The development comprised of six buildings. The one featured in this advertisement from 1987 is for the Briarwood building. 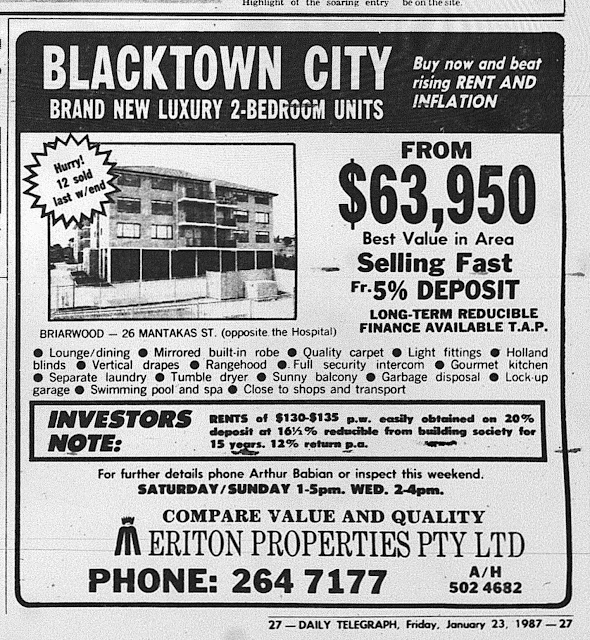 I managed to look up to see how much the apartments sell for today. They have sold for up to $330 000 in recent times.
Posted by Fabian Amuso at 00:00 No comments:

I walk past a vacant 33 Bligh Street in central Sydney, and I eagerly await the construction of the new electricity substation plus a new office tower. 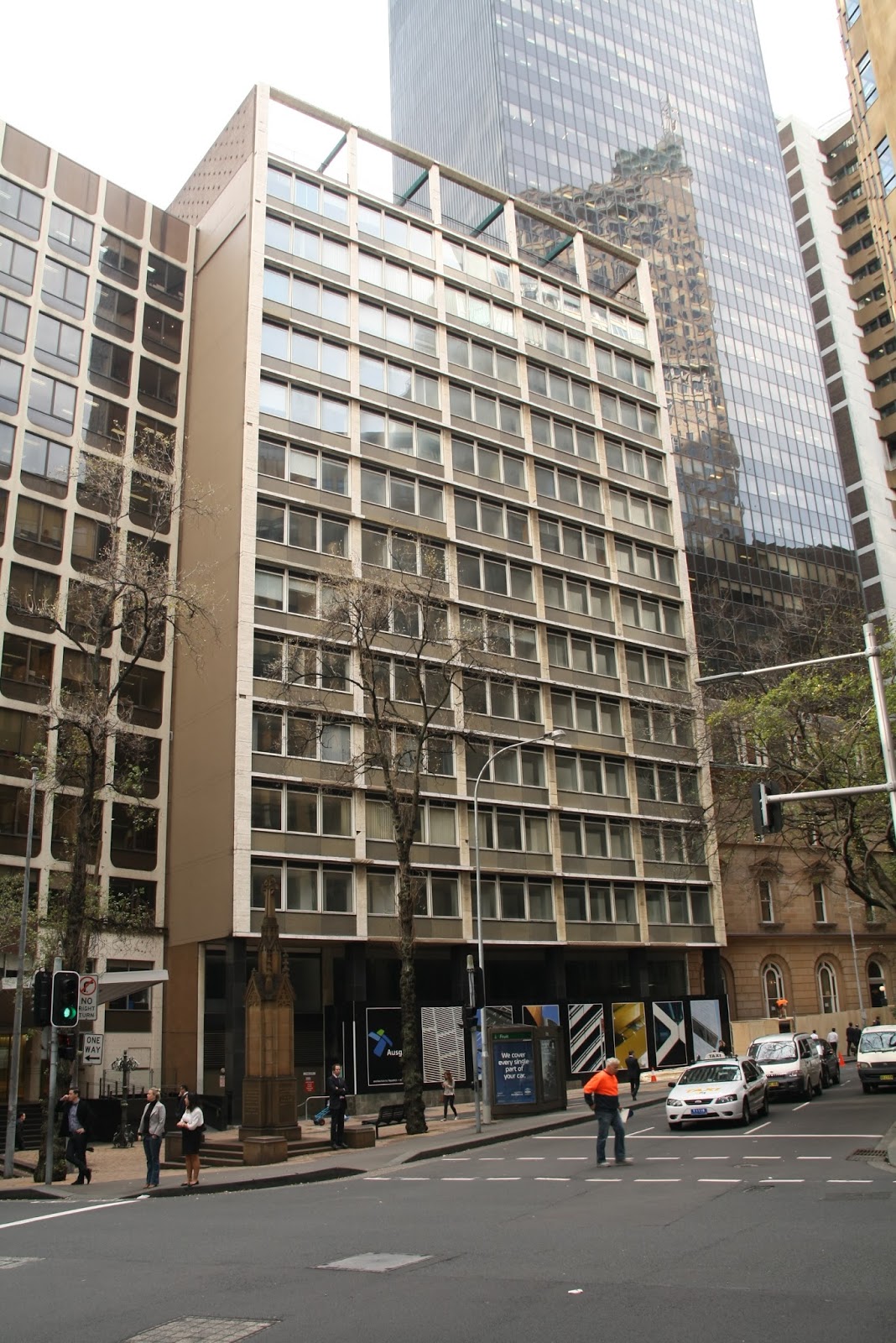 Photos were taken by the Author.

It has been a long saga and it goes all the way back to 1989 when a $110 million office tower was proposed and approved. It never got off the ground. 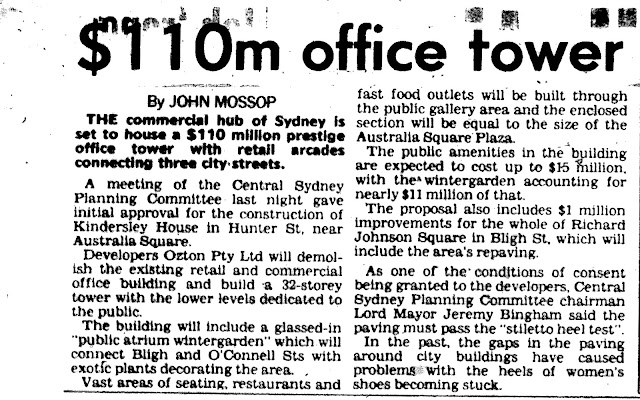 As the 1990s progressed, the proposals evolved and we ended up with a 235 metre, 52 storey tower proposed for the site. I took this photo back in 2002 at the City of Sydney Model Room at Town Hall. To achieve the height, a 12 storey atrium was created that allowed the apartments to be built higher. Without this atrium, the tower would have had to be shorter in order to comply with Sydney City Council's planning guidelines.

It would have been an apartment tower and the tallest such tower in Sydney, beating the current tallest World Tower by five metres. The unique feature of the tower was that the apartments were to be located on silts stretching fifty metres high above Bligh Street.

Despite being approved by council, that fell through.

A few other proposals came and went like this one from 2007...

In 2009, the State Government under Nathan Rees bought out the site for a proposed CBD metro rail line as it wanted to act as an entrance to a proposed Hunter Street metro station. This fell through. With the site in state hands, it was then decided to build an electricity substation to serve the electricity demands of the Sydney CBD. This has led to our current proposal. It will be 30 levels or 165 metres tall. The electricity substation will form the podium. The building is designed by Kannfinch. 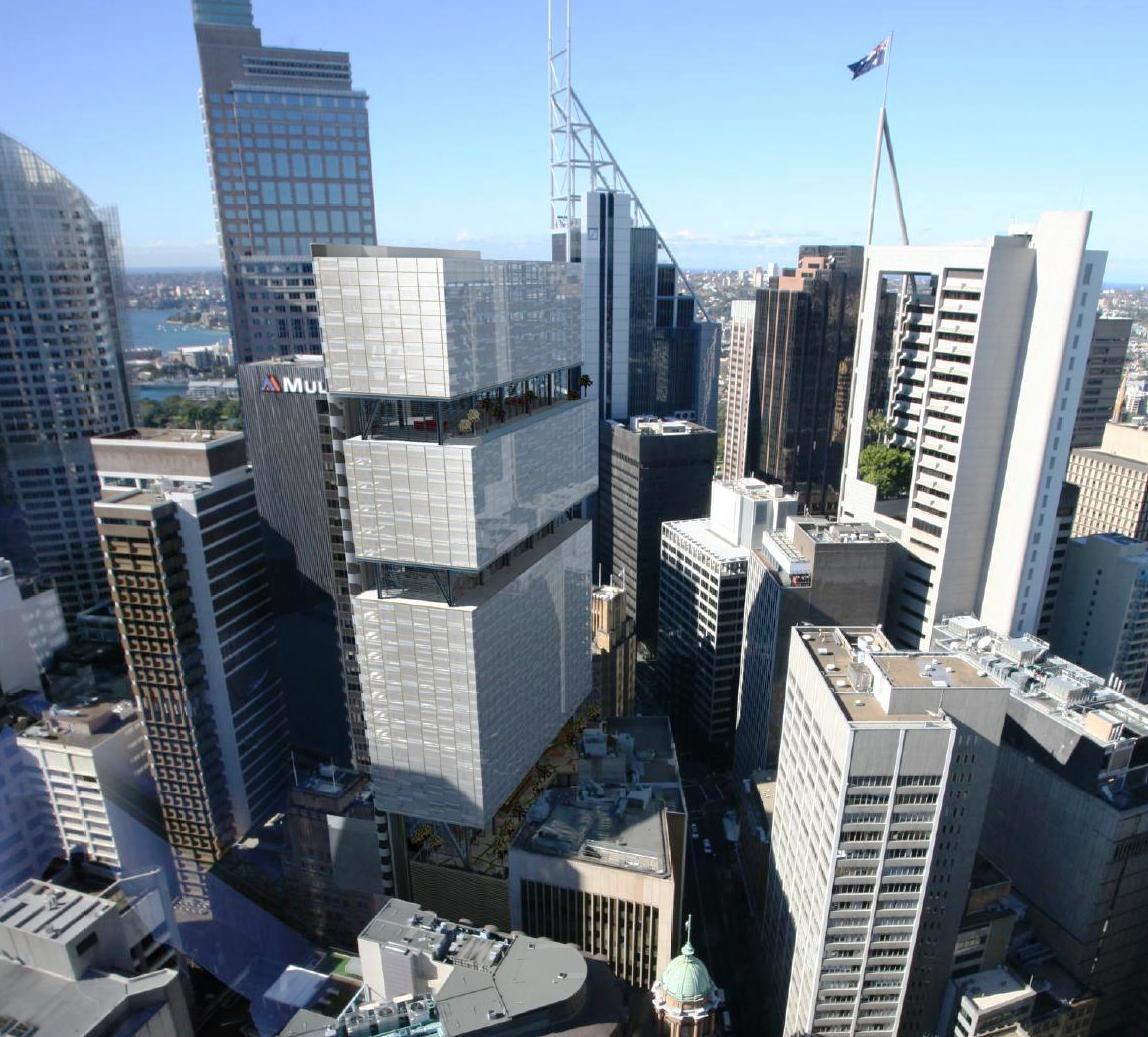 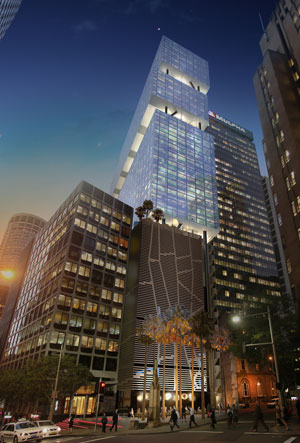 What disappoints me about the proposal is that they could have allowed for even more space, but the tower needs to reflect Sydney City Council planning guidelines which have restricted the current proposal to its height. As mentioned, Bligh Apartments managed to get approved at the higher height because of the "stilts". I think the approach to the design would have worked more effectively with the additional height.

The Government and Council have in my view squandered a potential opportunity to utilise a city site to its full potential.﻿

This weeks property advertisement is for Braebrook Apartments at Cremorne from early 1997. I recall this going up at the time. 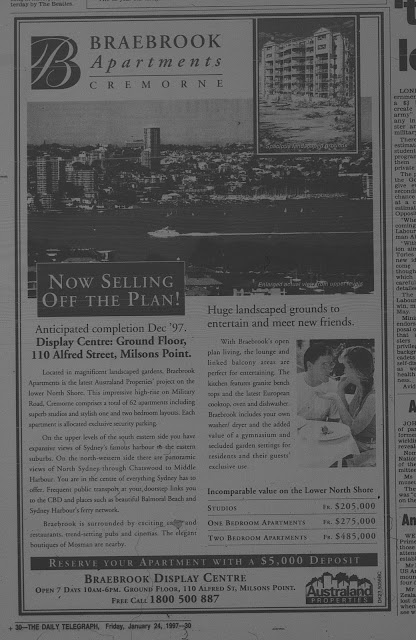 When I came across this clipping several years ago, I did not believe that Mt Druitt actually had a Grace Bros. It was the anchor tenant in "Marketown". In 1992, it would land in the hands of Westfield and become Westfield Mount Druitt. 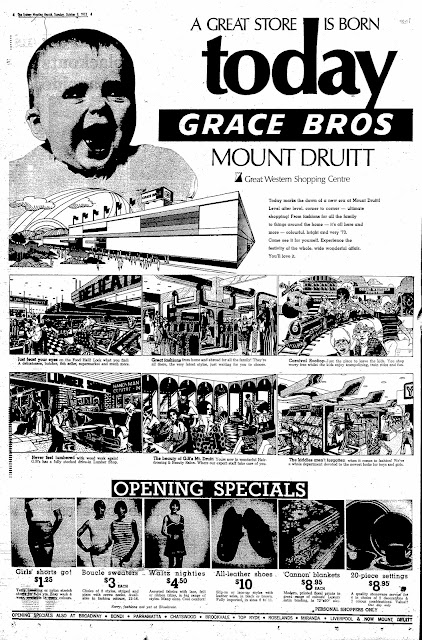 I had to do a quick scan of the internet to find out a little as to what happened to the store. Going by what I have read, the store closed in 2004. The space is now occupied by Coles and other speciality stores.

This week, our advertisement takes us to Carlingford wherein 1967, you could buy a block of land for $3390 (1695 pounds). According to the RBA Inflation Calculator it would cost about $ 39 313  in today's money. Another great bargain to be had. 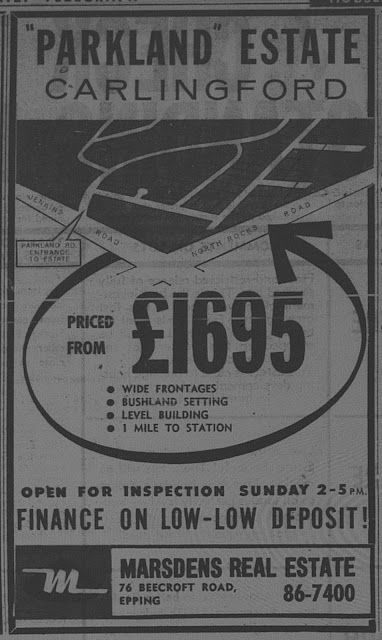 The estate would encompass the neighbourhoods bounded by North Rocks and Jenkins Roads at Carlingford.