1997: Attempt to sell off the Education Department Building

With the NSW Department of Education Building recently sold off alongside the Lands Department of Building by the NSW Government, it came to my attention that it was not the first attempt to do so. Here is a clipping from 1997.

But instead of becoming a hotel, it was going to become home to the ASX. They ended up in Bridge Street, but at Exchange Square. 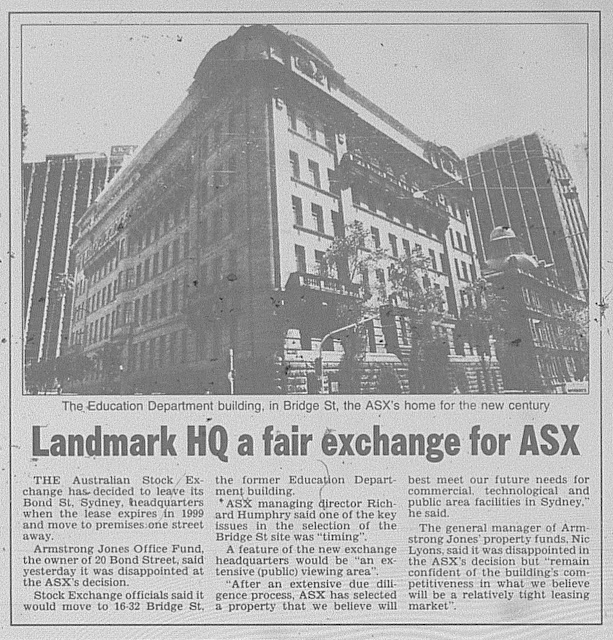 It's not often I come across a property ad for a street that either I live (or have) resided in. This week, I head to my childhood neighborhood of Robinson Street, Monterey.  In 1968 villas in McArthur Court were on sale. As pointed out recently, Monterey did not become a suburb until 1972, and in this advertisement, Robinson Street happens to be in Brighton-Le-Sands.

1996: The Elan Penthouse goes on sale

It has come to my attention that the penthouse at The Elan apartment tower in Kings Cross is for sale. Sadly though the price is being kept secret, but two decades ago they were not afraid to reveal how much the penthouse could go for - at least $7 million. 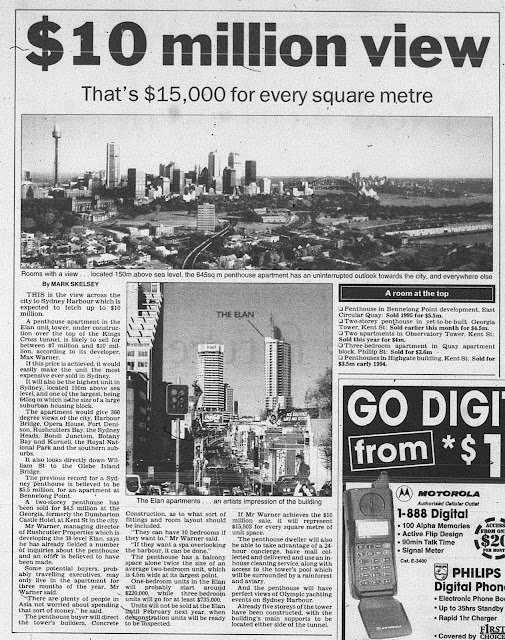 Property Advert of the Week: The Point, Pyrmont (1997)

This week's property advertisement takes us back to Pyrmont in 1997 . This time it is for The Point, which was developed by Walker Corporation. 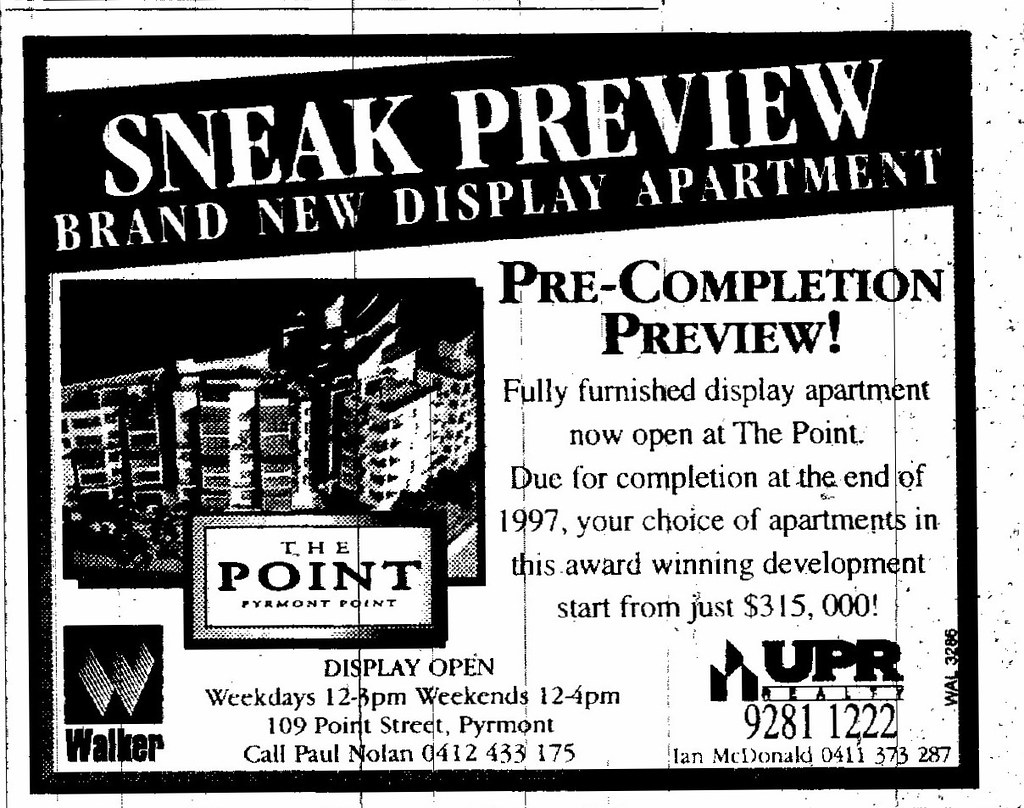 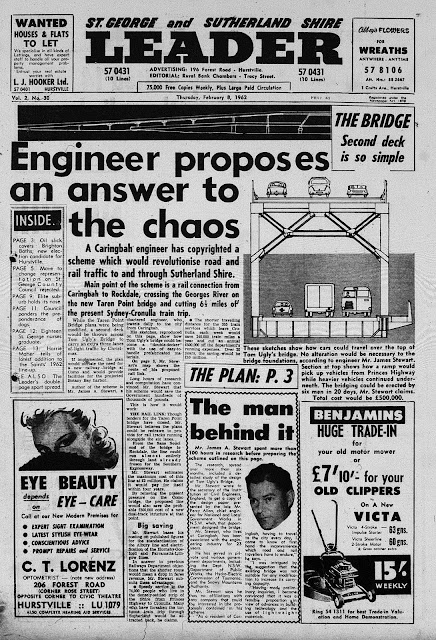 In 1962,  engineer James Stewart in the Sutherland Shire drew up a vision to improve transport across the city's southern suburbs. His idea was straightforward

*Build a second road deck over the existing Tom Uglys Bridge. He claimed it could be done in 20 days with six men.
*Use the F6 Corridor to build a new heavy rail line linking Rockdale with Caringbah and be incorporated into the new Taren Point Bridge. For Cronulla rail commuters, this would lead to a big reduction in travel times to and from the city.

The new rail link would have also eliminated the need to build what is now the current rail bridge at Como, but I think this was inevitable in terms of providing a smooth service between the South Coast and Sydney.
Posted by Fabian Amuso at 00:00 No comments:

This Week, we head to Wentworthville, where in 1967 you homes were on sale from 4350 pounds. Keep in mind that in 1967, real estate agents could still advertise in pounds as part of a two year transition period from the pound to the dollar.

According to the RBA inflation calculator the 4350 pounds would translate to $103 000 in todays money.

The ad is quite deceptive in terms of proximity to Wentworthville Station. You are in for a long walk if you need to catch a train.

In 1973, some thought Sydney's high-rise boom was not going to abate, and hundreds of old city buildings were facing their hour of doom.

Four decades later, it is interesting to note a number of featured buildings that faced doom, only to be spared the wreckers ball, like Central Baptist Church, ANZ Bank Building and Stawell House. The Regent Theatre survived for another fifteen years before facing the wreckers in 1989. In fact, the ANZ Bank Building and Stawell House are now heritage listed so they will never be pulled down.

City buildings like those in the article were initially saved because of the liquidity crisis that sent city developers to the wall that same year. Some went bust. The boom had also created an oversupply of office space in central Sydney, which meant that city development would crawl slowly for about a decade.  The economic reforms of the Hawke Government (1983-1991) would fuel the next wave of city development. Add the Green Bans and anti-development groups, and more buildings would find themselves saved from the wreckers.

In 1973, at least a billion dollars was to be spent on new city developments, which is the equivalent of $8 billion in today's money. At the moment, roughly two billion dollars is being spent on building developments in central Sydney, and we think that is a mammoth amount. 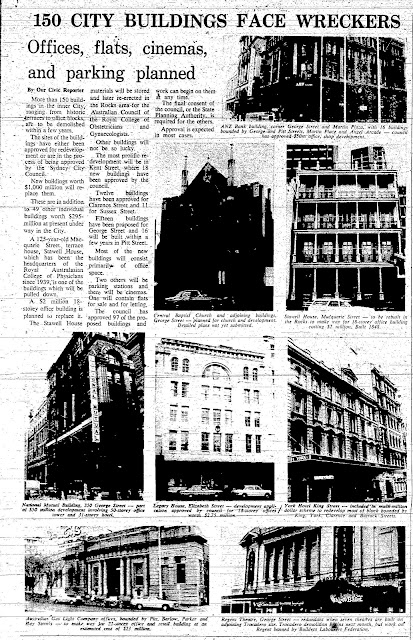 Property Advert of the Week: LJ Hooker Feature in the St George and Sutherland Shire Leader (1965)

Here is an L.J. Hooker Advertisement that was published in The St George and Sutherland Shire Leader on November 10, 1965, featuring homes for sale from their agents at Hurstville, Cronulla & Miranda. 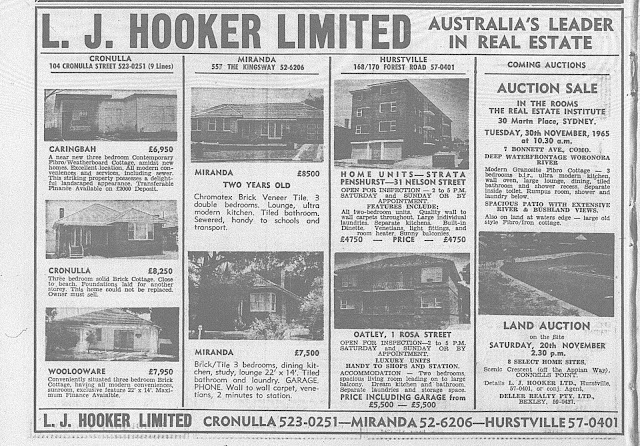