The Freshwater Class Ferries at present are the pride of Sydney's ferry fleet as they operate on the Circular Quay to Manly run.

They have served us proudly since 1982, and acted as the replacements for the aging steamers which had served the run for nearly 70 years.

But how did we end up with them?

It began in 1971. The Manly run was privately run by the Port Jackson & Manly Steamship Company and not part of the Sydney Ferries Network. The company was bought by Brambles Industries. Brambles increased fares, reduced services and retired the Bellubera. It was intended that the Baragoola would also be retired during this time. For regular commuters, it was feared that Ferry services from the city to Manly may be scrapped altogether.

At the time, patronage on the Manly run was decreasing due to increased car ownership, completion of new Spit Bridge in 1958 and the introduction of direct bus services from the Manly-Warringah region to the city.

However the Government wanted only two of the three steamers to operate - Baragoola, North Head and South Steyne. When the South Steyne was destroyed by a fire in August 1974, only two steamers were left.

During the decade, the cost of servicing the steamers had become a concern. With two steamers, no ferries were available in the event of a breakdown or if withdrawn for maintainence. Two Lady Class Ferries - Lady Wakehurst & Lady Northcott (both now retired) were reconfigured for the Manly run during their construction.

In 1975, it was announced by NSW Transport Minister Wal Fife that two new Manly Ferries would be in operation within three years.

The election of the Wran Government in 1976 led to the ideas that would shape the Freshwater Class Ferries, though construction did not begin until 1980:

The Collaroy was unique in that was configured to operate ocean cruises, which it did between 1988 and 1991. It has since been reconfigured for harbour services only. The Collaroy also managed to have open air decks on its second level, which were eventually phased onto the remaining member's of the fleet in the early 2000's.

The anticipated growth in patronage did happen and has established itself as it as "must do" for any tourist to Sydney, providing a cheap way to explore Sydney Harbour. On board, one will receive a comfortable experience. Recent renovations have resulted in contemporary furniture, free Wifi and even TV screens to catch up on your favourite show.

As for when they will retire? Thats unknown. Will we see a 5th member join or will they ultimately be taken over by a new class. The old steamers lasted up to 70 years before they sailed into history.
Posted by Fabian Amuso at 00:00 No comments: 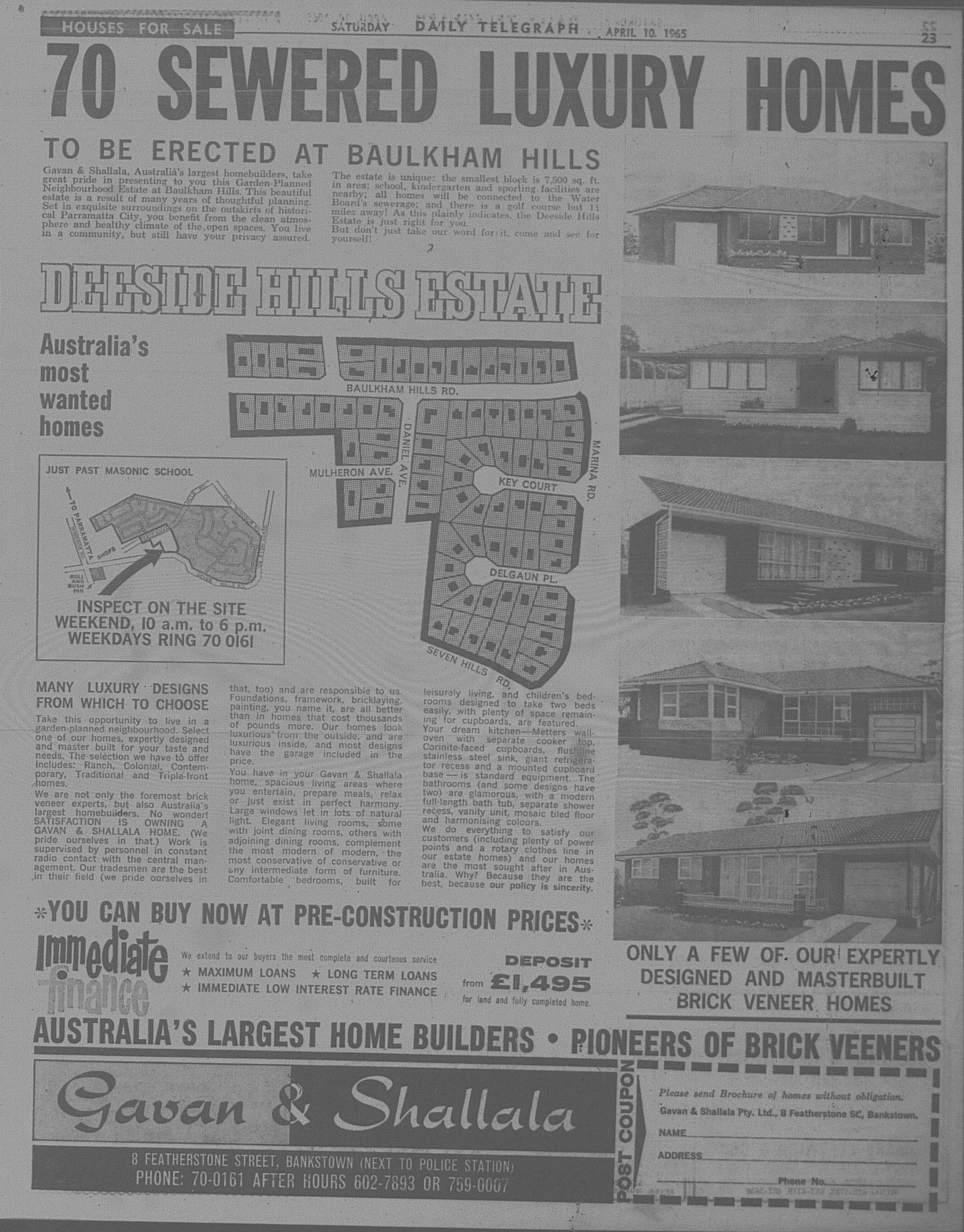 1968: Plans for the Qantas Centre are unveiled 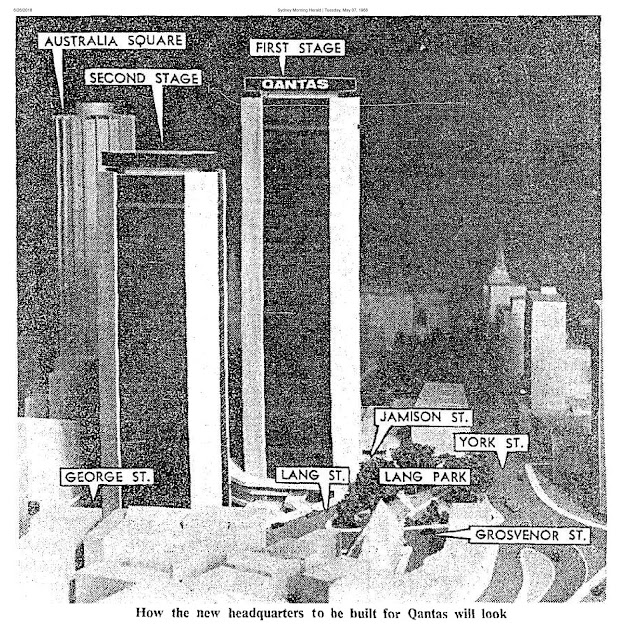 In 1957, Qantas moved into their Chifley Street Headquarters (QANTAS House) but just one decade after moving, Qantas was in need to move again. The ushering of the jet age during the swinging sixties fuelled the growth of Australia's international airline. The arrival of 747 jumbo jets was also going go fuel further growth.

QANTAS House was located on the eastern side of the Sydney CBD, but QANTAS had managed to secure by 1968, most of the block bounded by George, Grosvenor, Lang and Margaret Streets. It was going west.

In May, it was announced via a press release that they were planning to build two towers on the block. The first tower would rise approximately 607 feet and contain 48 levels. It was slated for completion in 1973

A second smaller tower would be built at approximately 500 feet tall (150 metres). However it would not be built until 1983 and accommodate further growth of the airline. Apart from shops at street level, a park and plaza were planned.

Industrial disputes meant that the first tower was not completed until 1981. It holds the record for the longest construction period for a city building in Sydney. The second tower (NAB House) was completed in 1985 (the process for this tower commenced with site tenders in 1981). It retained the Octagonal shape, but the sides appear more equal in length.

As this site has grown, there has been a growing need to keep a record of what you can find here.

I have been working on an index focusing on a selected list of entries encompassing a number of topics.

Click here to view the index which is under development but will be updated regularly.
Posted by Fabian Amuso at 15:19 No comments:

A few years ago, I shared some material on the opening of Roselands in 1965. Here is a "prequel" entry.

I recently found a proposed scheme for the Roselands Shopping Centre dating from 1961 which was approved by Canterbury Council. Instead of one big building housing all retailers (as they did) anchored by Grace Bros, this scheme had several buildings. It appears that there was even two open air squares. 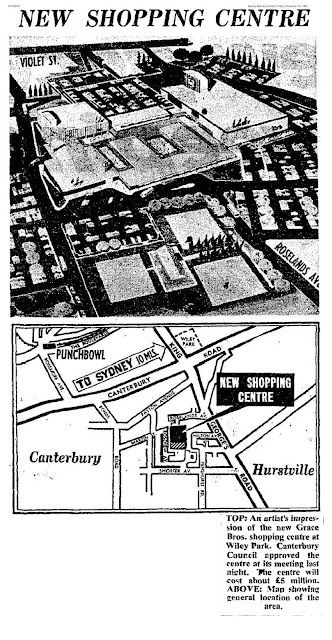 Could Roselands have evolved differently had they gone with the scheme? Would we have seen a Warringah Mall style shopping centre, south of the Harbour Bridge?

Or would they have to demolish the centre or a major renovation may have had to occur in future years to bring it to date with retail trends? Some good What If's to answer.

The design for the original centre was finalised in 1964. Projected cost was five million pounds.

Previous entries on Roselands that you may find of interest:
Posted by Fabian Amuso at 00:00 No comments: 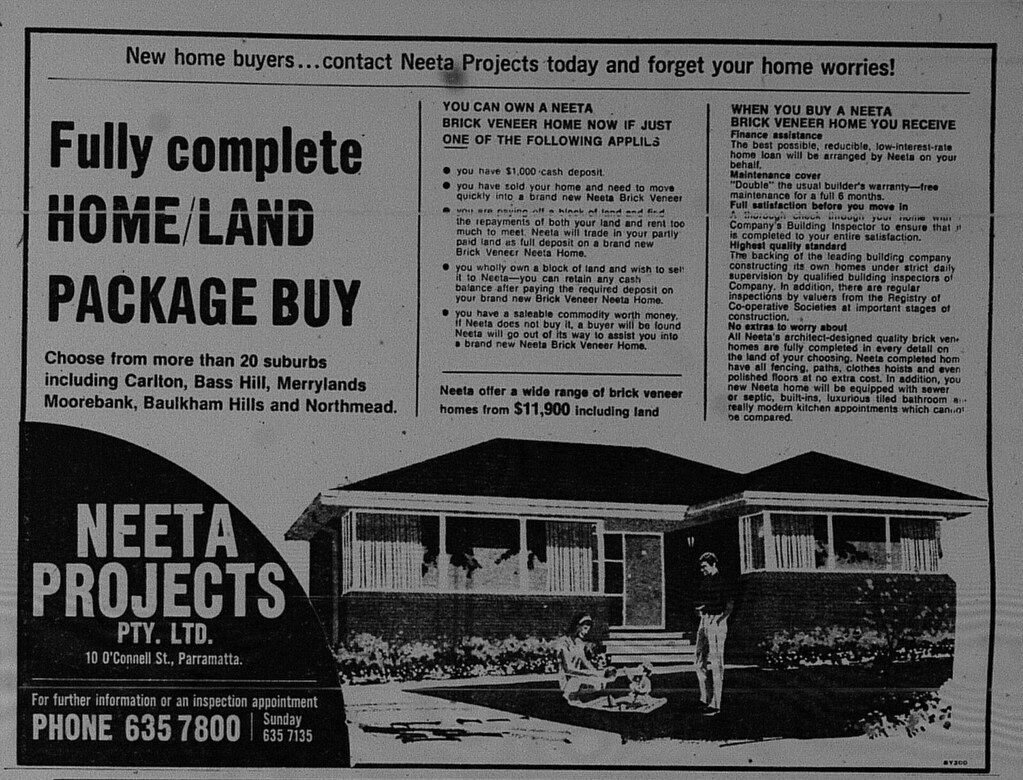 I have developed an interest of the former Hotel Sans Souci which was owned by Mick Moylan and the former Prince of Wales Hotel.

Karen Pentland wrote The Pub on the Point for the 2013 Ron Rathbone History Prize organised by the former Rockdale City Council. It is recommended and contains some great oral accounts, especially from its final years.

However, I am curious as to what led to its closure and conversion into a residential estate.

My memories of Mick Moylans (as the locals refer) go back to my days as an infant. I attended the Sans Souci Community Pre School (1989-90) which was a short walk up Clareville Avenue at Sandringham.

In the late 1980's Mick Moylan's had opened an outlet of the Billabong Family Bistro's which from my understanding were a national chain of fast casual dining restaurants. This was posted recently (below) to the St George District Memories and Old Shops Australia Facebook Groups. The newspaper advertisement was published in the December 22, 1988 edition of The St George and Sutherland Shire Leader. 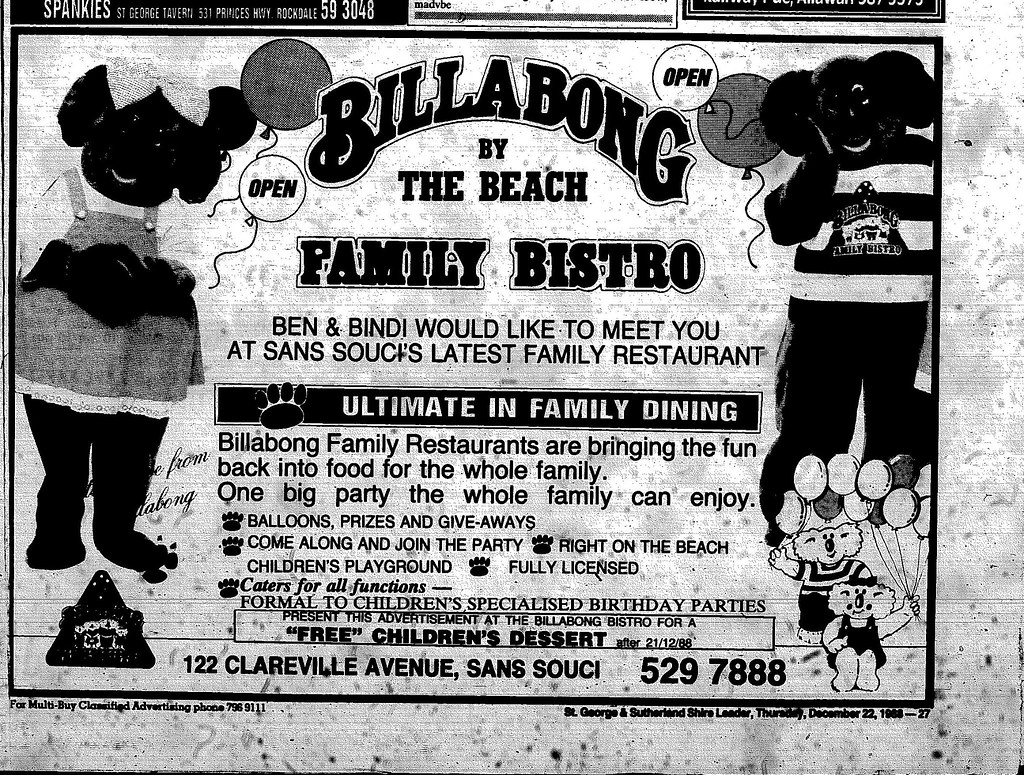 I recall going to birthday parties there during my pre school days and even had my sixth birthday there in 1990. Bill & Bindy were dressed in a more professional koala costume than the advertisement shows. My brother also had his sixth birthday there in 1992. I remember going to the beach outside Mick Moylans in January 1993, and recall seeing fences around the site. Mick Moylan's was gone forever; to be replaced with a residential estate. 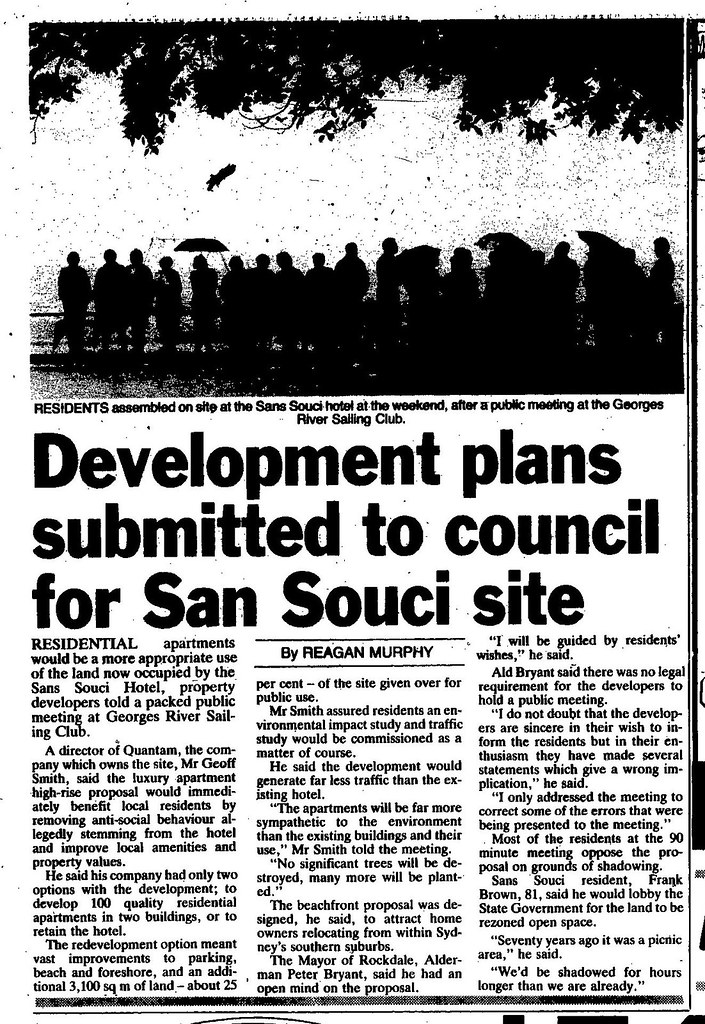 The earliest source that suggested residential development on the site was from 1986 when The St George and Sutherland Shire Leader reported that the owner Laurie Beaumont was exploring options for housing including three storey unit blocks or single homes. Under planning guidelines, Rockdale Council would permit construction of free standing dwellings. However, there would be a loss of parking for beach users and a road would be required for access to the boat ramp. 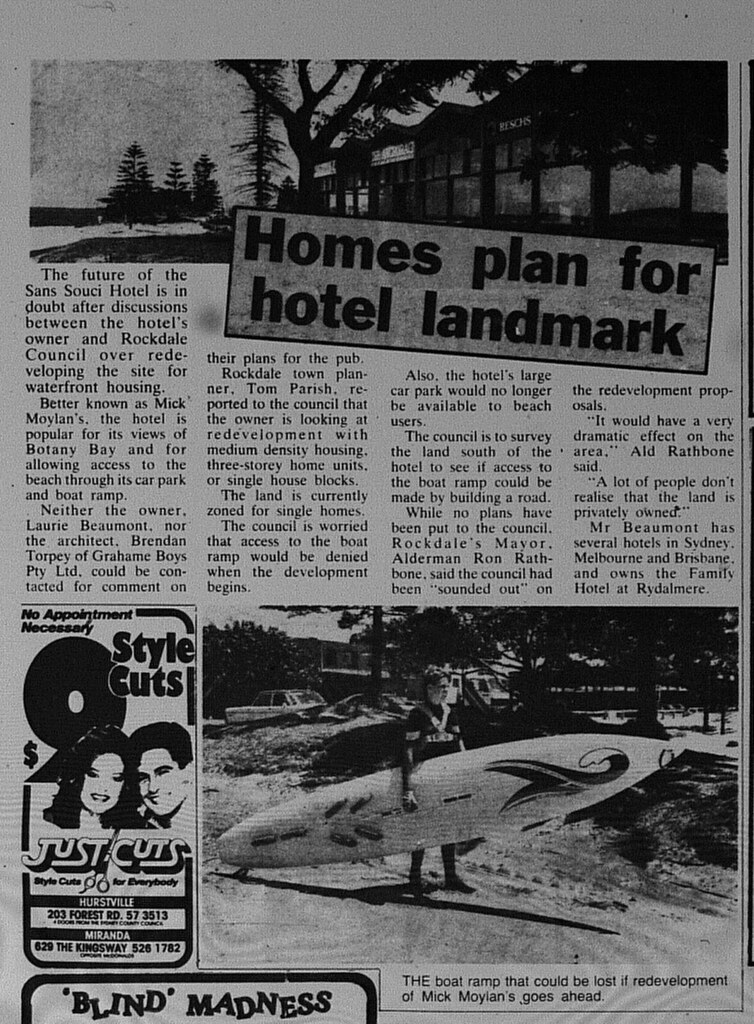 In 1990, plans ramped up when proposals for two six level buildings were unveiled to maximise public access. Norfolk pines and the famous Moreton Bay fig trees would be retained. A bistro or restaurant would be also be included. Mick Moylans would still have a presence of some sort on the site. 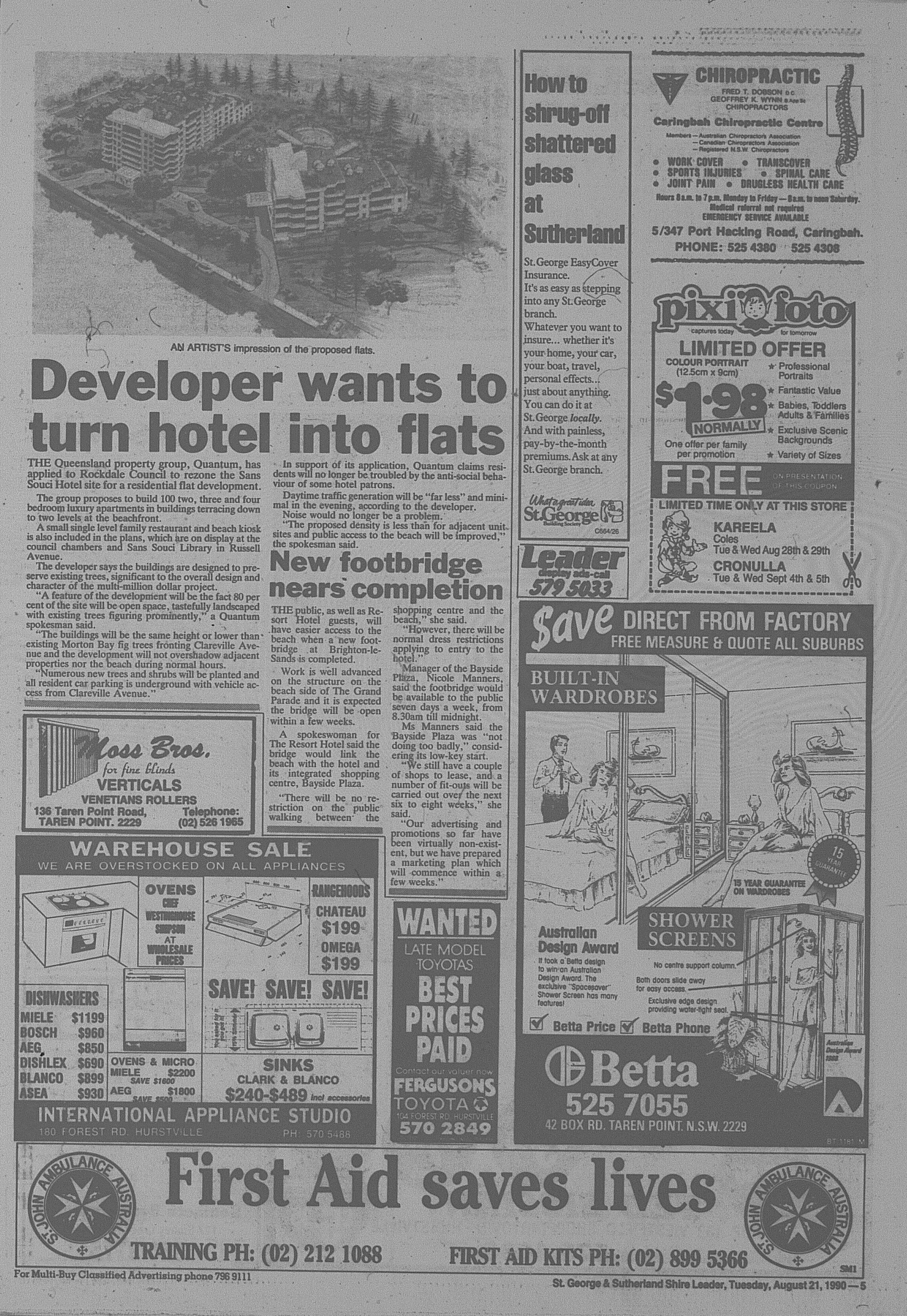 This plan didn't proceed and Rockdale Council approved the construction of 15 luxury townhouses to form The Sandringham estate. It is a gated development. Public beachfront access was retained with a path running along the beachfront.

The boat ramp was also lost.

I have not yet found further details as to how the scheme was scaled back and why. Neither have I found as to when in 1992 did Mick Moylan's close. Was it even announced?

The What if question comes into mind had the council approved the twin six storey apartment towers?

Below are photos of the former Sans Souci Hotel site as seen from Dolls Point (2017). Photos taken by the author. 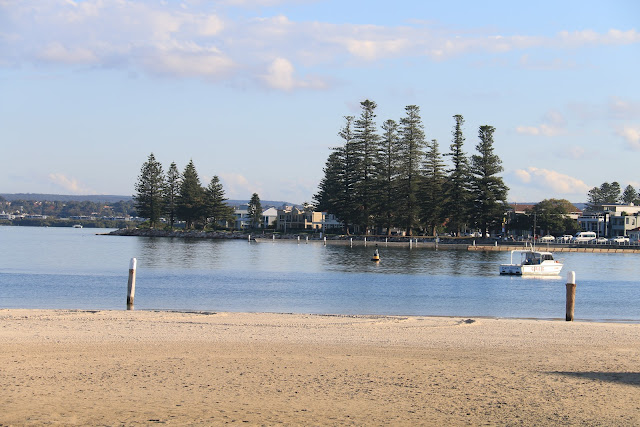 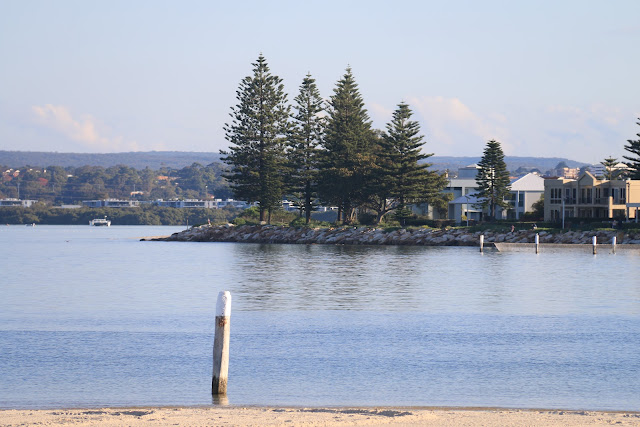 In 1968, apartments were for sale at 21 Riverside Crescent in Marrickville (Advertised as Dulwich Hill). 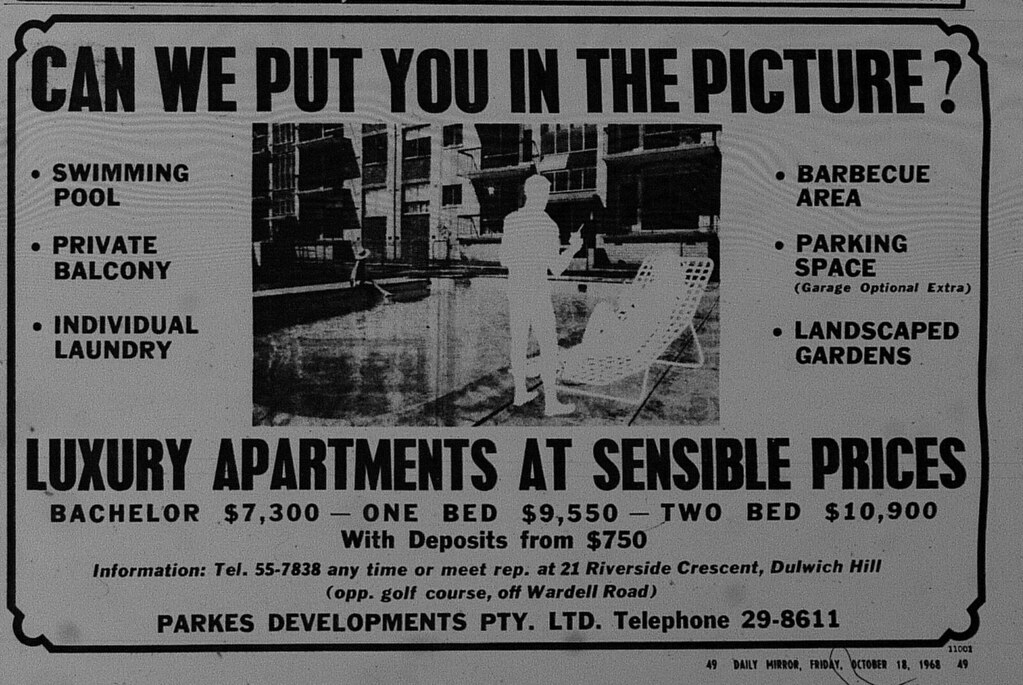 1986: Early concept for the expansion of Westfield Hurstville

Just eight years after opening in 1978, Westfield were already planning for an expansion of its shopping centre at Hurstville.

An early concept plan would see the centre cross over Park Road; in effect turning the street into a tunnel and would not reach The Avenue as the centre eventually did.

Snowy Hill Park was to be retained, but was eventually replaced with parking. 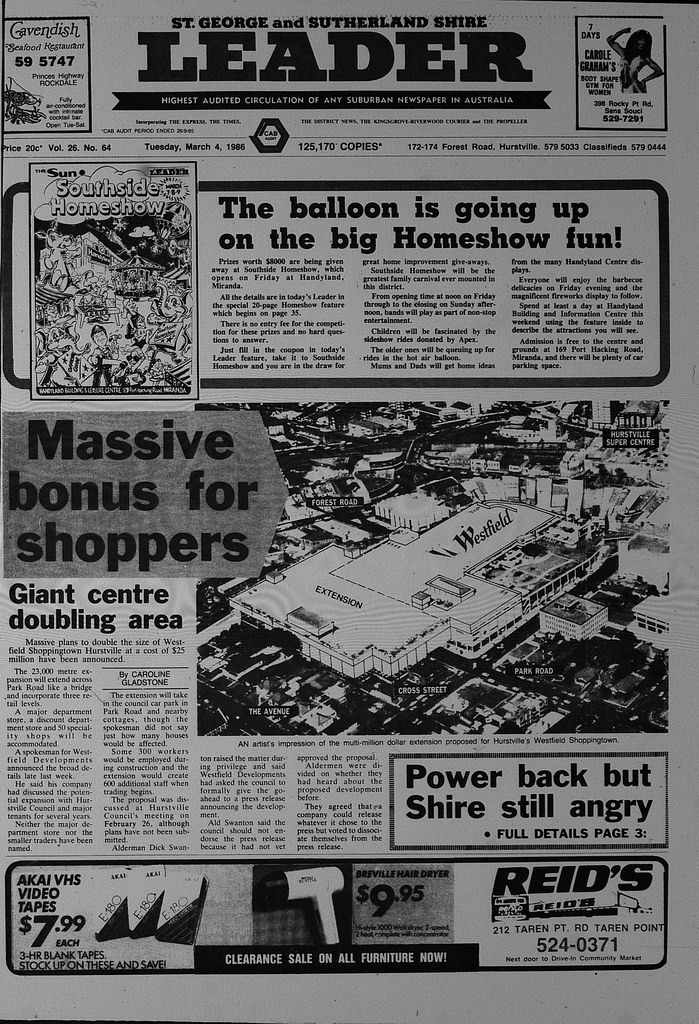