North Sydney decided to embrace the skyscraper during the 1960s which fuelled a major high-rise boom. In 1968, plans to develop the airspace over North Sydney Station was unveiled. It comprised of a hotel and two office towers and was to be completed in three stages. 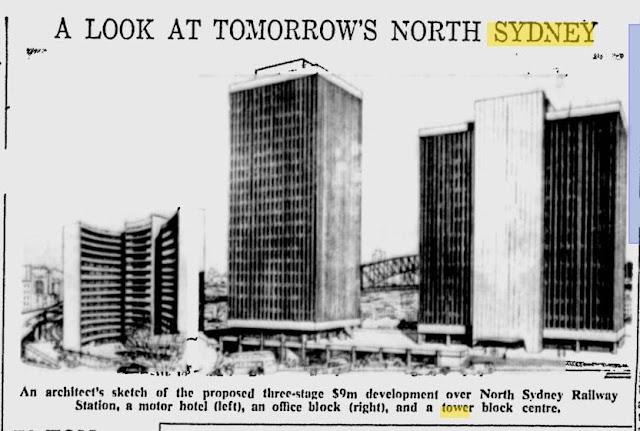 In the end, the towers were built. The hotel (known today as the Harbourview Hotel) became reality as conceived.


The two office towers were built, though they were to appear during the 1970's and1980's

The first office tower (middle) at 13 Blue Street was built in 1975  and is now known as the Fijitsu Centre. The tower rises 20 levels


However, they do not share the common podium as originally planned and there is a public square outside the Zurich Insurance Building for people to soak up the city and harbour views.
Posted by Fabian Amuso at 00:00 No comments:

This week's property advertisement takes us to Brighton-Le-Sands where apartments at "Seventeen" (17) Trafalgar Street were on sale. There was also a historical feature included giving a history of the suburb. 1971 was a significant year for the area given that Rockdale Council was celebrating its centenary. 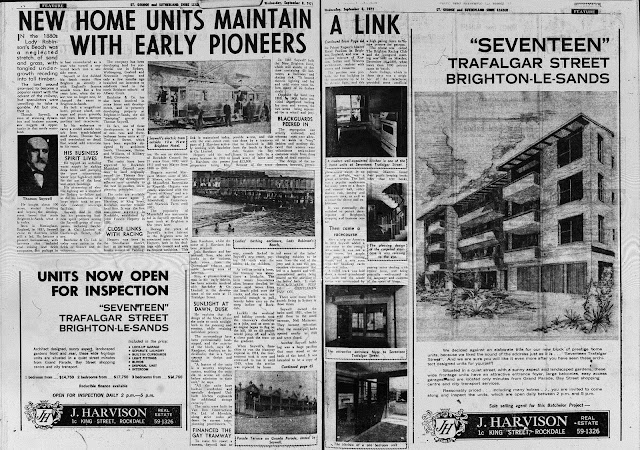 This week, I share an article from The Daily Telegraph in 1994 where Phillip Cox raises concerns that Sydney's reputation was being destroyed by poor architecture and urban planning. With the city recently handed the rights to the Olympics for the year 2000, the change needed to be done then. 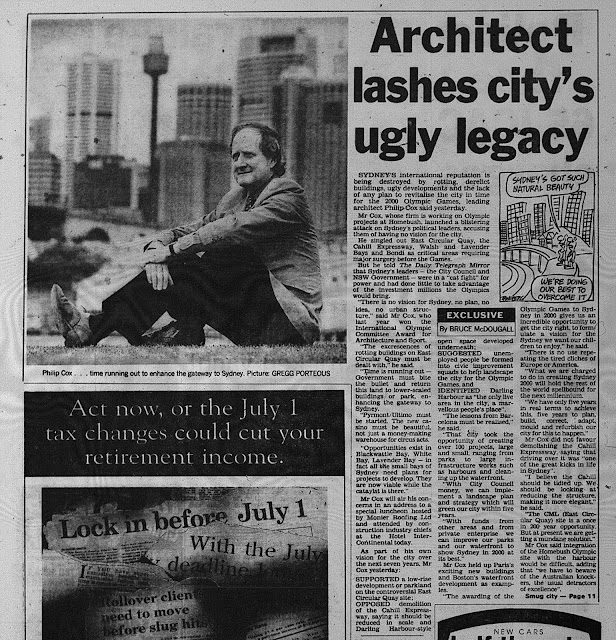 Cox outed East Circular Quay (yet to be redeveloped), Cahill Expressway, Walsh and Lavender Bays for major surgery. East Circular Quay was redeveloped along with Walsh Bay, but has thrived. Walsh Bay has established itself as a cultural centre and the Barangaroo Development will propel it further.  The Cahill Expressway and Lavender Bay were (and still are) untouched.

He did raise some valid ideas like utilising the space in and around the Cahill Expressway to reduce its scale. The State Government recently indicated plans to redevelop the area with the areas at street level to be the focus.

And the Civic Improvement Squads could be a possible alternative to the dole, provided it gives people real skills needed for the workplace.

Posted by Fabian Amuso at 08:42 No comments:

In 1997, Meriton were selling apartments in the Dalgety Square complex at Pyrmont, and for as little as $183 000. It was one of a number of Woolstores on the Pyrmont Peninsula that was given a new lease of life during the 1990's as the area underwent a major renewal. 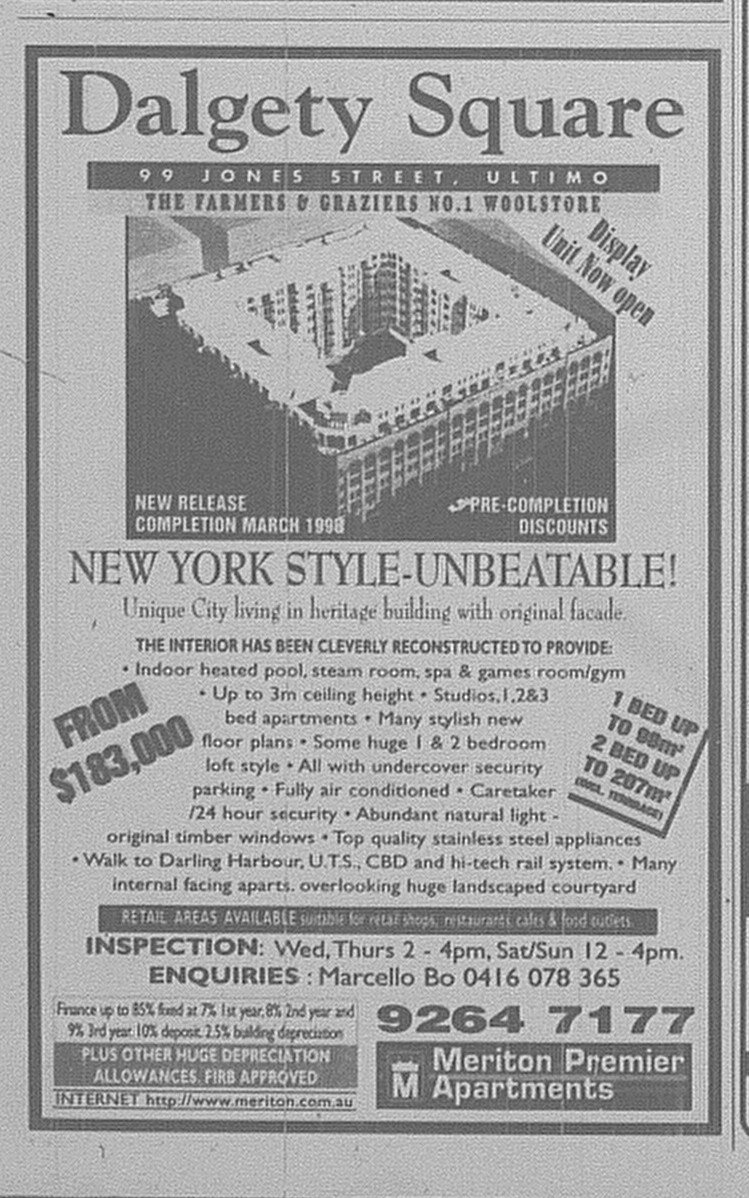 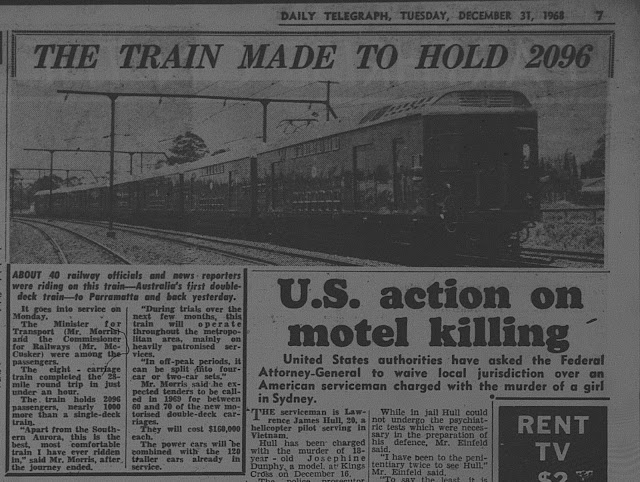 Sydney might not have the world's best rail network but visitors to Sydney do like it for its double-decker trains. It is the only Australian city that has them in operation. Ever wondered when they began operation? It was on January 1, 1969. Some might say 1964 when the Tulloch carriages were incorporated into trains carrying single level cars.

However, this train in 1969 was entirely double deck (or bi-level). It set the precedent for the modern fleets that would operate on the Sydney rail network through to this very day. The following year, the first of the famous V set double-decker trains began operation on interurban services. In 1972, the first mass order for double-decker trains for suburban services was undertaken. These trains are what as known as the 'S' Sets and would carry up to 1600 people, about 25 % below what they thought a few years earlier.

These trains are still part of the Sydney Trains fleet, mostly used as surplus trains for major event services, though there are a few timetabled services where the trains still run. Updated versions (the C & K sets) came into service during the 1980s. One notable feature is that they were airconditioned trains. In 1988, the Tangara came into operation.

Since the turn of the Millennium, there have been two major rollouts - Millennium Trains (2002) and the Waratah Trains (2011). The Waratah trains were bought in to replace the remaining S set trains. The final eight car set in the Waratah fleet was delivered in 2014. The double-deckers would see the demise of the single deck trains on metropolitan services with the "red rattlers" phased out by 1993.

However single deck trains will return in 2019 when the North West Rail Link opens between Chatswood and Rouse Hill. Some people question the decision because the single deck trains will lack the capacity that double deckers have. It tells us one thing - Sydneysiders take their double-decker trains for granted. It is a way of life.
Posted by Fabian Amuso at 00:00 No comments:

I recently came across another classic advertisement from Neeta Homes, this time at Greenfield Park near Bonnyrigg. The advertisement, however, lists it as Bossley Park. In 1987, a four-bedroom home could be bought for just $75 000. 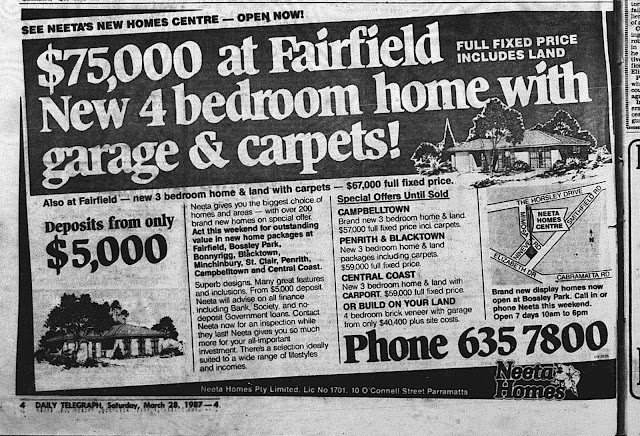 1966: Introduction of decimal currency in Sydney

To mark fifty years since the introduction of decimal currency in Australia, I've got some clippings from The Daily Telegraph to share, as they reported on the changeover from the pound to the dollar in Sydney. They also had to assume the role of educator, with pages dedicated to explaining how the dollar worked including conversion rates from the pound. 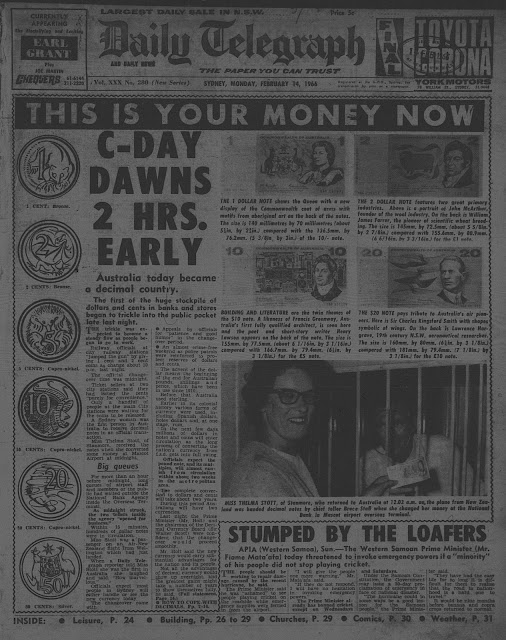 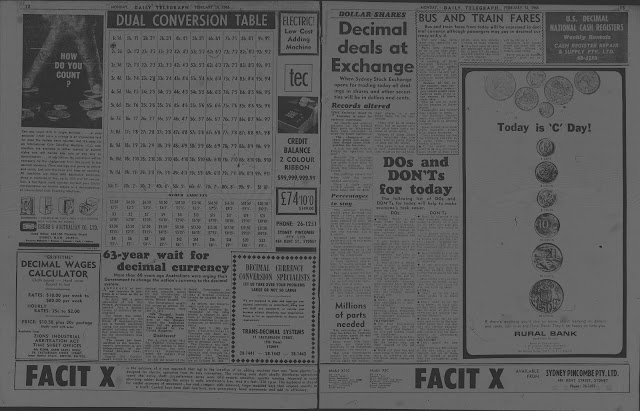 People do like to be strict in terms of any changeover, but some decided to jump the gun. Railway ticket offices were issuing change in dollars and cents at 10pm the night before. When Sydneysiders woke up the next morning, life continued on as if nothing had happened. Banks were permitted to reopen after being closed for four days to prepare for the changeover, and while busy, experienced few problems.

There were some difficulties associated with the transition. For some, it was an opportunity to profit. The Sydney Morning Herald on February 15 reported that a shop had increased the cost of sandwiches from 12 cents to 17 cents.

The transition period went through to 1968. Regulars to this site would note how some real estate advertisements from the remainder of 1966 and 1967 list prices in pounds. This was allowed under the transition. Stores also listed prices in pounds, shillings alongside dollars and cents. 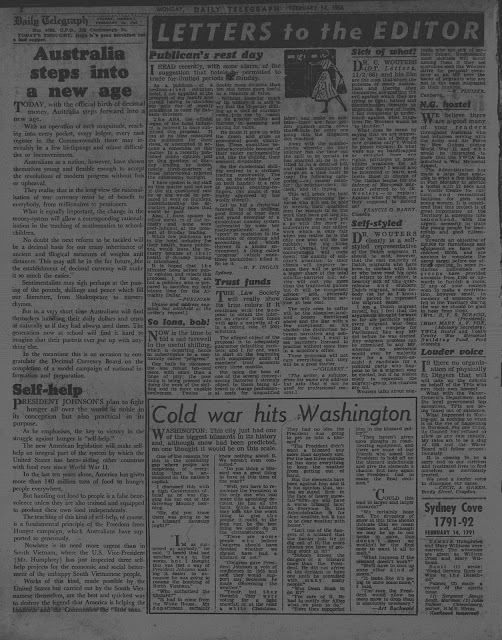 The major newspapers were generally positive. I've included the editorial from The Daily Telegraph on February 14. It was seen as a "new age" for Australia and that it would bring long-term benefit to the nation. The Sydney Morning Herald adopting the conservative view wondered if the conversion would be worth it given the impact of decimalisation like the need to carry two currencies in the interim, supply of new currency and inflation.

Over the years, there were changes to coins and notes. In 1969, the shape of the fifty cent coin was changed as it caused some confusion with twenty cent coins along with the cost of producing the coins itself. In 1984, the one dollar note was replaced with a coin, followed by the two dollar coin in 1988.  During the early 1990s, one and two cent coins were taken out of circulation, though can still be accepted for payment. There were some additions to banknote denominations. The $5 banknote was introduced in 1967, $50 banknote in 1973 and the $100 banknote in 1984

Between 1992 and 1996, new polymer banknotes were issued for all denominations to remove counterfeiting. This was pioneered by the Reserve Bank of Australia who created the banknotes in conjunction with the CSIRO and the University of Melbourne. The Reserve Bank is planning to update banknotes over the next few years.

On a global level, the Australian Dollar has grown to be one of the world's reserve currencies and one of the most actively traded, due to the stable nature of the economy.

And as a bonus, why not include two television advertisements including the famous Dollar Bill and Company.

I came across this one just recently while going through some files. It is for the Panorama Gardens apartment complex at Banksia in Kimpton Street. Apartments were going for 4750 pounds but it did have something not many unit complexes at that time (or dating from that period), a swimming pool. 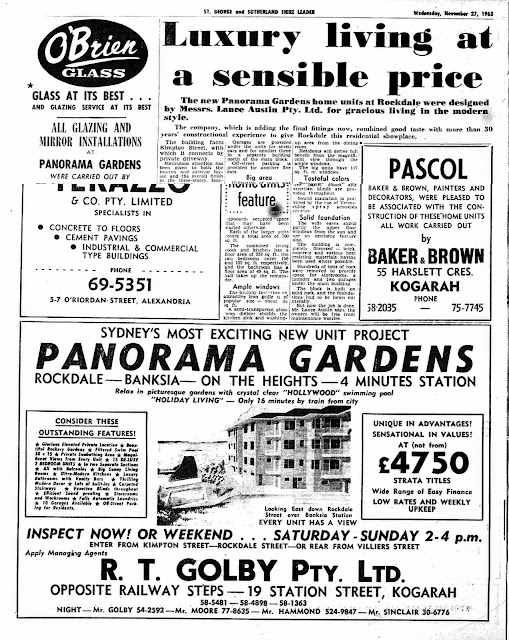 On February 23, 1970, the Indian Pacific Train went into operation and for the first time allowed for uninterrupted rail travel between Sydney, Adelaide, and Perth. Before 1970, one had to take five trains just to cross the country (and via Melbourne) on various gauges. The line completed a century-long vision to construct a rail line to link the eastern and western coasts of the continent. A lavish ceremony was held to mark the commencement of services at Central Station. 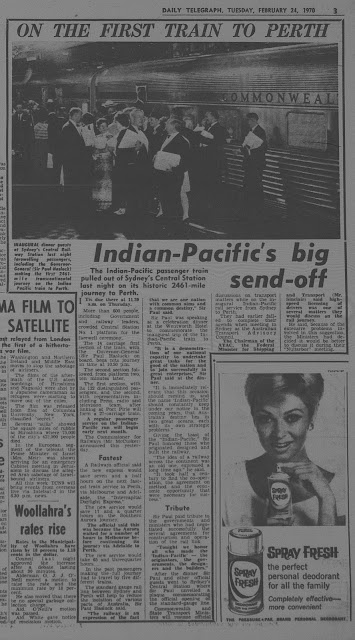 Four days later, the train arrived to a big welcome in Perth with 10000 gathering at Perth Station for its arrival.

It has survived the jet age due to the experience that it is offered to travelers. While one can fly from Sydney to Perth in four and a half hours, a journey by rail allows one to see the many landscapes that shape our nation. The hospitality on board makes the journey a holiday in itself and has become regarded as one of the world's great rail journeys.