This week, I share with you an advertisement for Masterton Homes dating back to 1997. 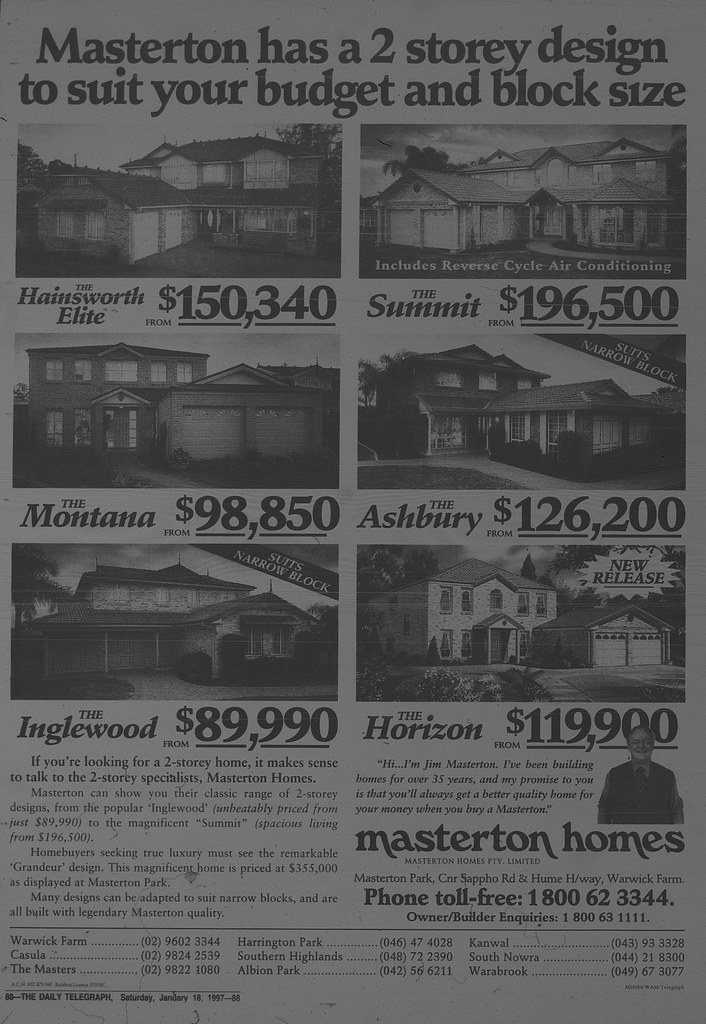 Source: Masterton Homes Pty. Ltd. 1997. "Masterton has a 2 storey design to suit your budget and block size" (Advertisement). The Daily Telegraph, January 18: 88.
Posted by Fabian Amuso at 00:00 No comments:

This week, I thought I'd share a feature report on Bruno Grollo, that was written by Mark Skelsey of The Daily Telegraph in late 1998. Grollo was the head of Grollo Constructions (now Grocon).

At the time, he was in Sydney to attend the final concrete pour of their first project in Sydney - 1 Martin Place. It included the restoration of the famous GPO Building. Behind the stone facade, would rise a 25 level office and hotel complex. 1 Martin Place would open to the public less than a year later. 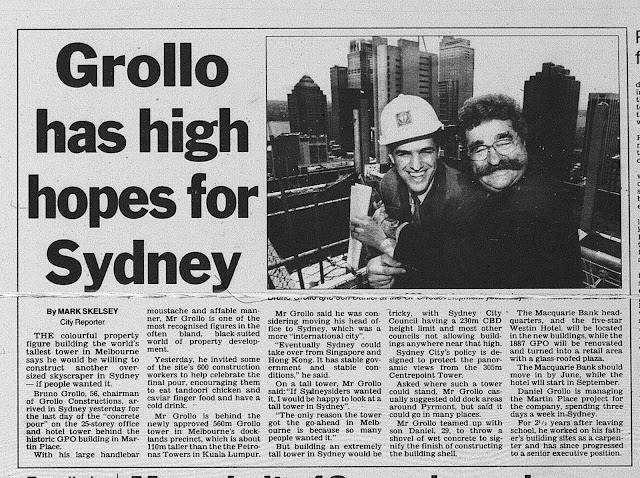 Grollo was keen to see if Sydney could end up with its own Grollo Tower, which believe it or not was at the same time he had won approval to build his 120 level, 560 metre tower in Melbourne which at the time would have been the world's tallest skyscraper.

The article mentions that Sydney's height limits (Capped at 235 metres) was due to the need to protect the views from Sydney Tower, which from what I am aware of, is not correct. From my understanding, Sydney's current height limits have stemmed from the need to allow sunlight to penetrate into city streets, public spaces and parklands.

This article from 1995 explains why: 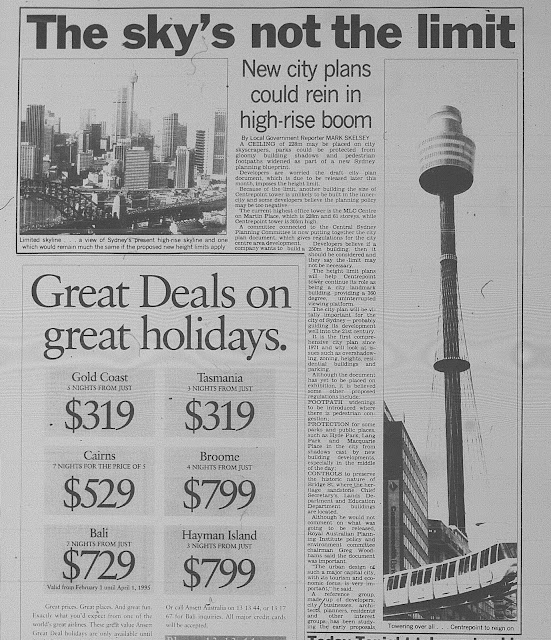 Earlier this month, Sydney City Council announced that it is proposing to increase the city's height limit from 235 metres to a maximum 310 metres., Already, there are proposals that are testing the waters for taller towers in central Sydney, with negotiations currently taking place between developers and the council. One proposal is for a 248 metre office tower at Circular Quay and a 260 metre apartment tower above the Event Cinemas complex in George Street.
Posted by Fabian Amuso at 00:00 No comments:

This week, I share with you a real estate advertisement by V.S. Lovett promoting the sale of forty housing blocks at Peakhurst. This is now the suburb of Peakhurst Heights. 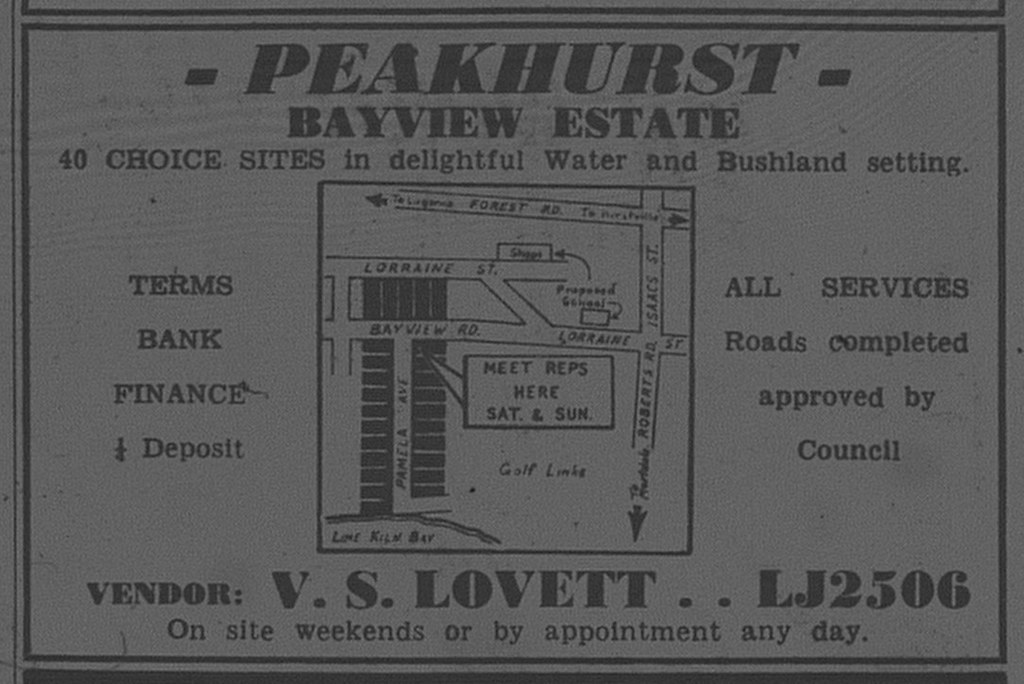 A fortnight ago, I mentioned that our series on World Square had concluded, but there is a postscript. From time to time, there is always something new that can be found once the research is presented. Just recently, I came across a 1965 proposal to build a 38 level tower right atop the Anthony Horderns Building.

How did I come across it? The Sydney Morning Herald has given its archives for 1955-95 a huge makeover and provides more thorough search results on anything that one wants to find.  Simply playing around with the upgraded features gave me access to articles that I would not have found under the old website.

I had thought that the first World Square scheme was from 1973, but getting to where it is now was a process that spanned forty years, not the thirty or twenty years that I may have once thought.

The idea for a tower built above Anthony Horderns was a simple idea and was seen as a way of trying to renew the southern end of the city, which newspapers were highlighting that year. It went as far as reporting that it was unsafe to venture in the streets around there. The plan included three floors of underground parking, five floors of retail, 31 levels of office space and three floors of apartments at the top of the building.

It could have been the best of both worlds, but I think the 38 storey tower would appear dated against other city buildings, not to mention the fact it might have warranted a heritage listing today as one of the first major highrises down that end of the city.

They were optimistic that it would be ready by 1968. 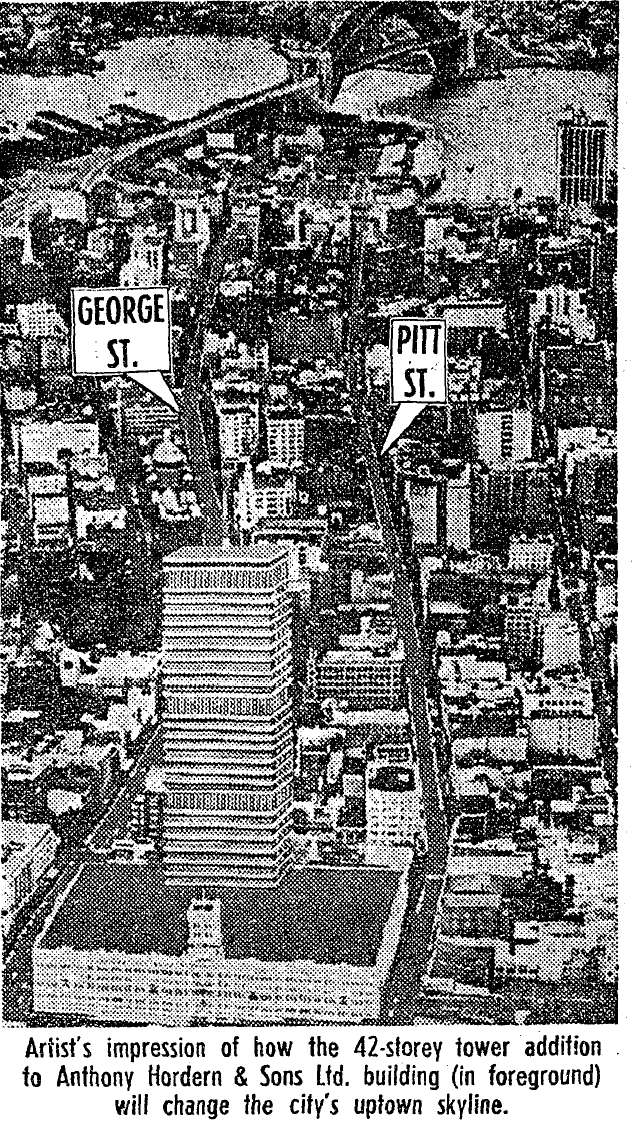 This week, we head to Randwick where $14 500 bought you an apartment at 94 Alison Road with views to Randwick Racecourse. In recent times, apartments have been fetching at least $700 000 on the market. One sale netted the vendor $850 000 last year. 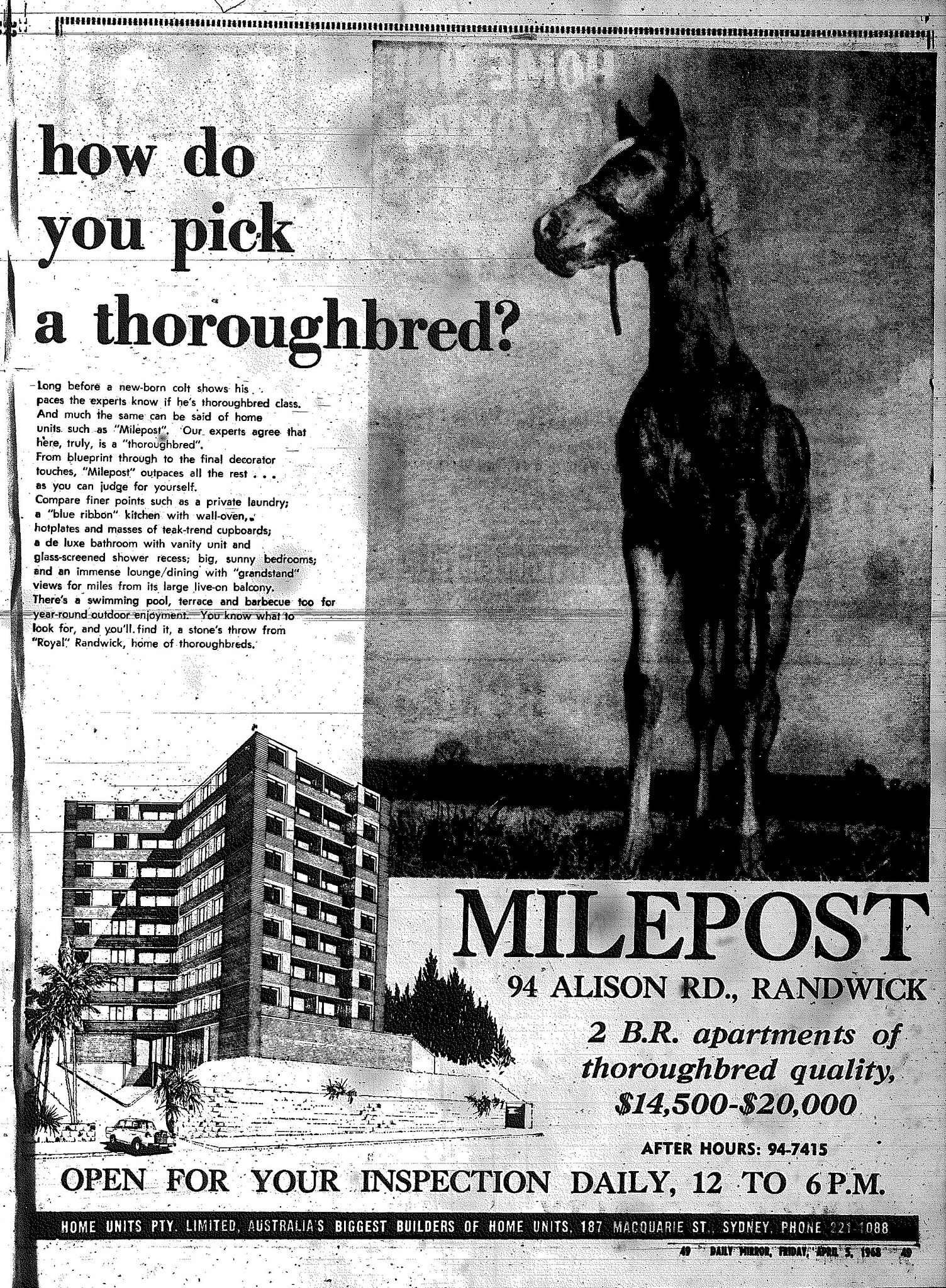 School holidays means sharing something interesting and odd. This clipping from 1963 contains an illustration of new navigation beacons for Sydney Harbour to mold in with the architectural style of the Sydney Opera House. I can see that they were space-age inspired as well. I have never seen these at all so presumably, they have gone to the "Never Built" pile. They would have been an interesting sight on Sydney Harbour no matter what.

This week, we head to North Strathfield. In 1995, Mirvac were selling units in the Strathaven Complex in George Street. A very handy and well desired location to live in these days, with public transport, shops and a school (McDonald College) just metres away. 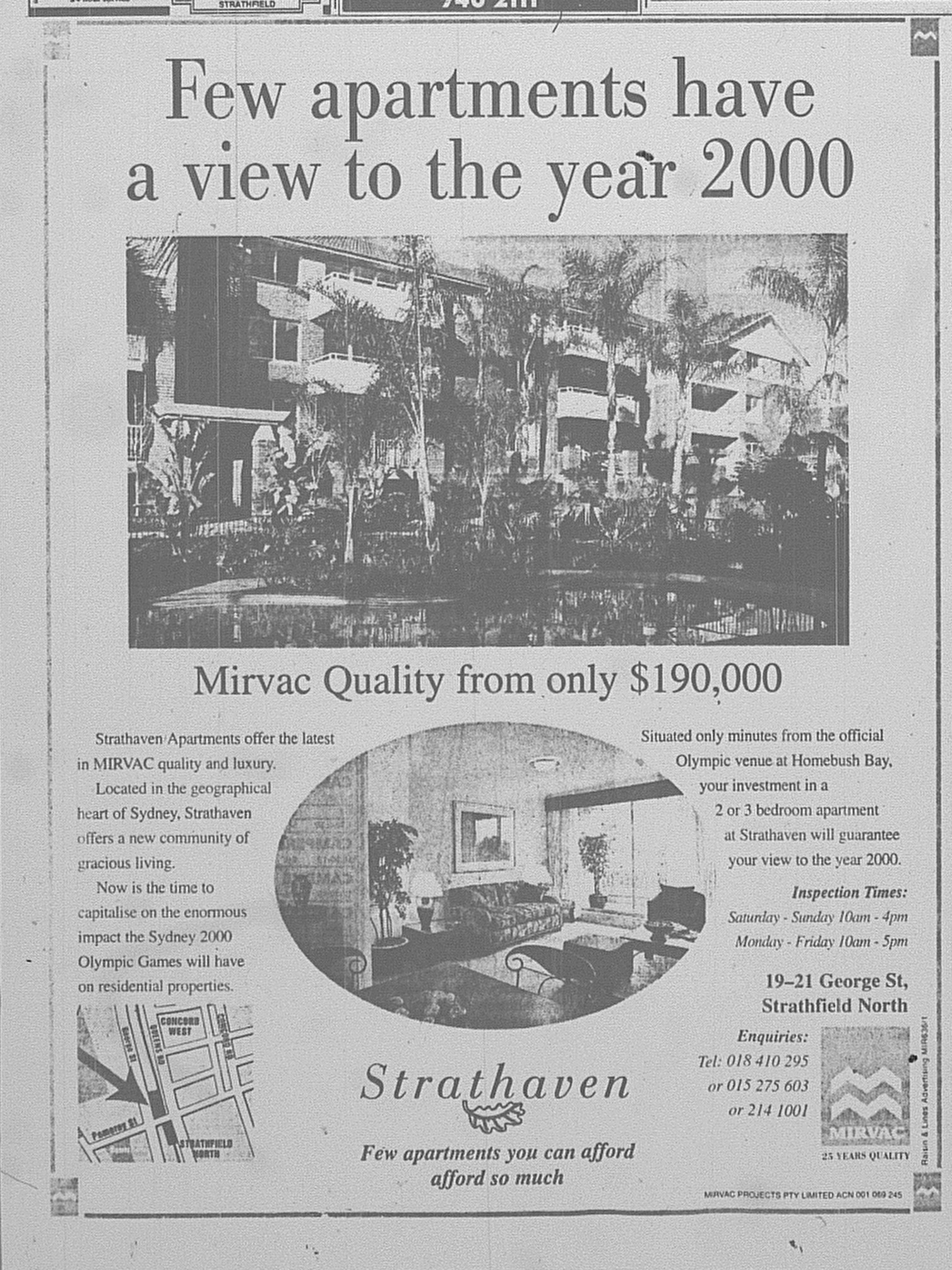 Our long trip through the Evolution of World Square now hits the end as we now look at the final tower to be built, which is now 52 Goulburn Street.

Under the Kenzo Tange Scheme of 1985, the building on the site was to play host to the third tallest building on the block. However, the floor to space ratios that were allowable for World Square (excluding Hordern Towers) meant that only two of the three towers could be built if they stuck to maximum heights. Otherwise building heights for the remaining two buildings would have to be reduced.

Then Meriton got the North West corner of the site and that again would impede any future development. Multiplex wanted their big office building at 680 George street and that meant nothing more than 12 levels could be built at the corner of Goulburn and Pitt Street.

Around 2003, there was a plan though for an apartment tower on that corner. With planning rules more relaxed for unit buildings, you could still get the space to build a tall tower, but still would fall short of Hordern Towers. It was around 30 floors. Below was a possible scheme that dated back to 2004.

Multiplex stuck to a 12 level office building which would become the home of the Australian Tax Office (ATO). Its height was just 53 metres, only 20 % of the height of its tallest neighbour - World Tower.


Work began just one year after Latitude was completed in 2006 and finished just a year later.


And there we have it, we have answered the question as to how World Square came to be what it is today. It is a centre of activity for the southern end of Sydney's CBD, a place where people can live, work, shop and gather in the one place. Did it fulfill its objective - I'd say yes it has, though it has to be scaled down from the original ambitions. The challenge though with Ernst & Young departing the area for 200 George Street, it leaves a huge hole in terms of attracting a major commercial tenant to base their Sydney operations there. The question that I am left to ask - What is it that holds companies from going there? Is it the ambition to get prized harbour views? Is it transport access (compared to the harbour end of the CBD, public transport is better). Is it proximity to city landmarks?

Turn your heads south and look towards Broadway where the educational institutions are based. Wouldn't having access to those institutions and their facilities help a business that wants to prosper in the connected world that we live in? The future workforce is there as well. It smack bang between Town Hall and Central Railway Stations, which provides easy access to rail that the financial heart of the city cannot offer and light rail running at the door from 2019.

Property Advert of the Week: HomeWorld (1987)

This week, I share another classic advertisement for Homeworld, from 1987. 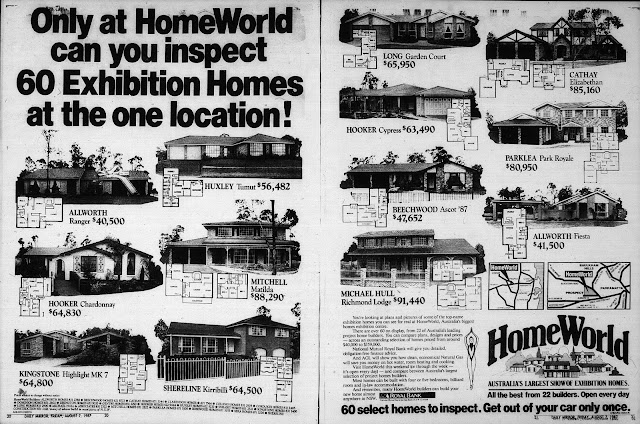 Source: HomeWorld 1987. 'Only at HomeWorld can you inspect 60 Exhibition Homes at the one location', advertisement, The Daily Mirror, August 7:20-21
Posted by Fabian Amuso at 00:00 No comments: