This Friday (December 2), Channel Seven will celebrate 60 years of broadcasting in Sydney, under the callsign ATN7.

It was the third TV station to commence operations in Sydney following the opening of TCN9 in September 1956, and ABN2 (ABC) just a month before. The studios were located at Mobbs Lane, Epping, with the TV transmitter based at Gore Hill. ATN7 would remain at Epping until 2010 when they moved production facilities to the Australian Technology Park at Eveleigh. The original studios is now a housing estate. Several years before in 2004, its news department relocated to purpose-built studios at Martin Place. Local and national news bulletins and programs are produced there.

ATN7 was owned by Amalgamated Television Services comprising of a consortium of various radio, electrical and media interests including The Sydney Morning Herald and The Sun. It was a subsidiary of Fairfax. The channel would eventually become the flagship of the Seven Network, even though HSV7 in Melbourne was the first channel in the network to go to air in November 1956. ATN7 and HSV7 formed the Australian Television Network (Seven Network) in 1963. It would eventually be joined by BTQ7 (Brisbane), SAS7 (Adelaide) & TVW7 (Perth).

Fairfax would have ownership of ATN7 until 1987 when Quintex owned by Christopher Skase bought out the Seven Network. This was due to changes in Commonwealth media laws which stipulated that Fairfax could only own either print publications or television stations. Fairfax opted for print publications. Today, the Seven Network is currently part of Seven West Media, owned by Kerry Stokes. 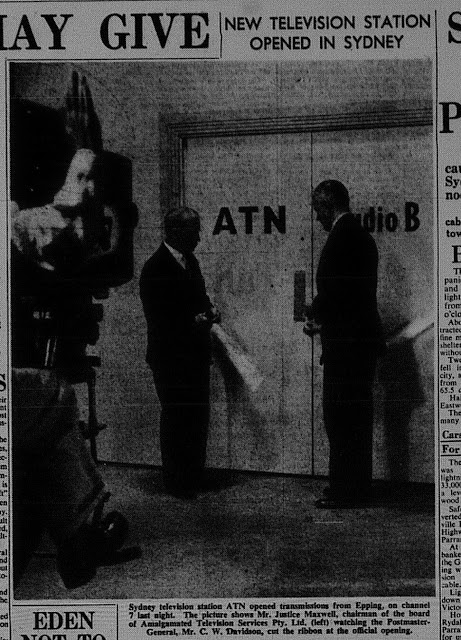 The transmission on opening night (December 2 ) commenced at 7:30pm with the official opening of the channel by the Postmaster General - Mr. C. W. Davidson. This was followed by A Shower of Stars, which was a live studio program at 7:45pm. The first feature film - It's Folly To Be Wise screened at 9pm. A news bulletin at 10:30pm would close the first night's transmission, closing at 10:45pm. 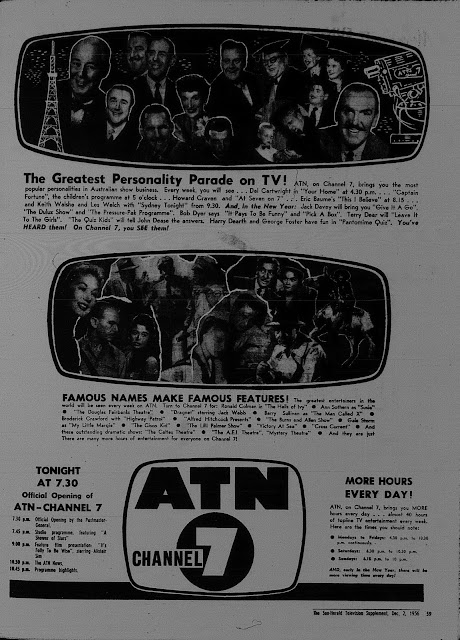 A special supplement was provided in the December 3 edition of The Sydney Morning Herald to mark its opening. Selected extracts feature below. Initially, TV broadcasts on ATN7 commenced at 4:30pm with transmission closing at around 10:30pm. On weekends, broadcast times were shorter. 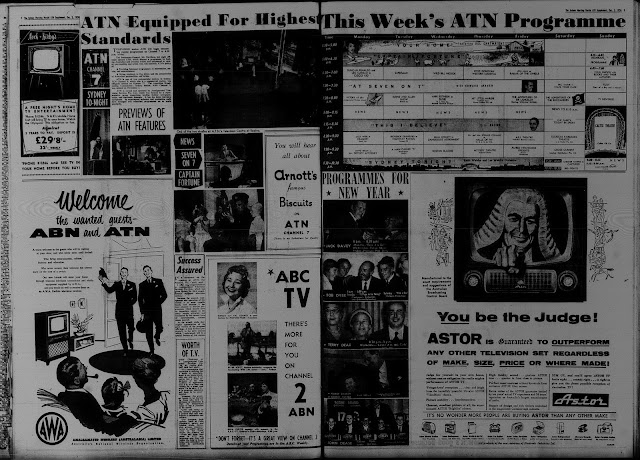 Below is a feature on its mobile broadcast unit (Click to enlarge). 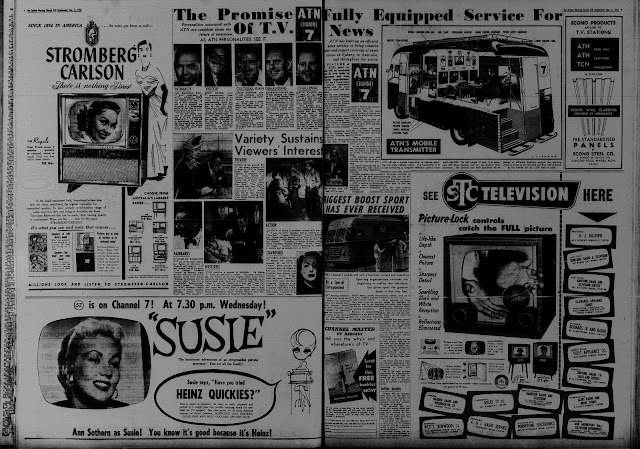 Over the past sixty years, ATN7 has contributed significantly to the success of the Seven Network and bred stars of the small and eventually for some the big screen. Writing its achievements would need to be an essay. It has also been noted for pioneering programming formats on Australian television. For instance, Sydney Tonight was the first "tonight" show in Australia. Where would Graham Kennedy, Bert Newton and Don Lane be if it were not for this? At Seven on 7 was also the first current affairs show in Australia. ATN7 has also been an innovator. They were first with videotape equipment at Epping in the 1950s but also working with GTV9 in Melbourne to broadcast programs between Sydney and Melbourne with microwave links.

This week's property advert of the week is one published by Westminster Homes in The Daily Telegraph on July 8, 1972. 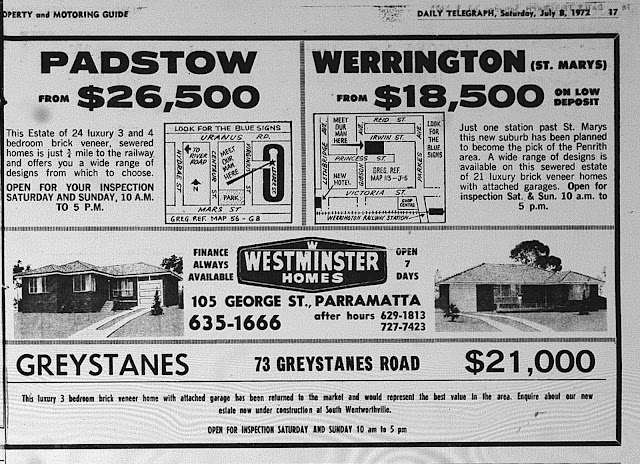 1989: Origins of advertising on Sydney Trains.

What I have noticed with the Liberal Government in NSW is that a number of their ideas while they may appear to be new, were actually on the drawing board when Nick Greiner was premier. Think of his idea to remove (or reroute) the monorail. It took until 2013 for that to happen.

So it seems that the O'Farrell/Baird Government has taken credit for ideas that were really Nick Grieners idea after all.

Advertising on trains was considered back in 1989 and here is some proof. At the time it was being considered to aid in reducing the deficit that was incurred with running trains in NSW. In 1989, the government had undertaken a major reform of rail services across the state including cuts to rural rail services and job cuts as part of reducing operating costs. 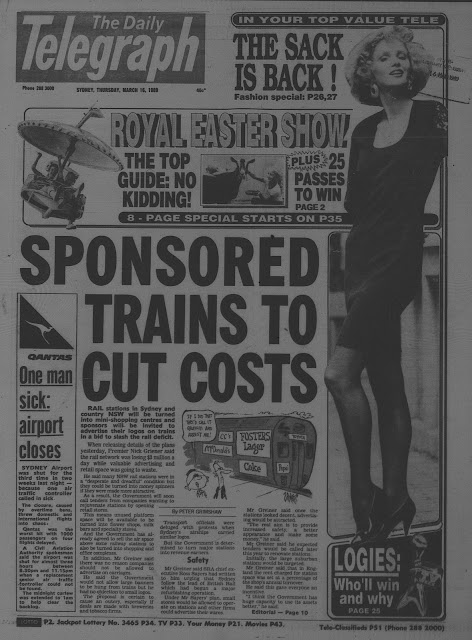 Fast forward to now, Sydney Trains is still in deficit. Advertising revenue has been embraced as an opportunity and not as a negative, with the money to be invested across the rail network. I've included a report screened from Ten Eyewitness News (December 3, 2013) to give an overview of the current approach.


It's an issue that will cause debate, but we have been used to advertising on buses for decades.
Posted by Fabian Amuso at 00:00 No comments:

Click here to see the complex as viewed from the street today. 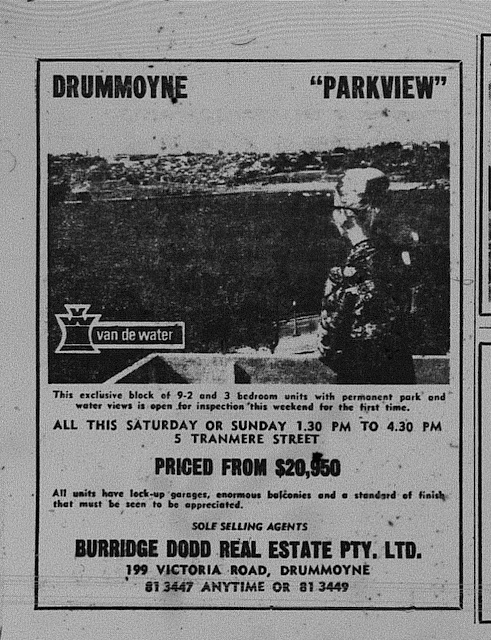 Donald Trump has been elected in the past week as the President of the United States, succeeding Barack Obama.

And it just happened in this past week, I came across a 1990 clipping from The Daily Telegraph where the man himself revealed plans to build one of his famous casino resorts here in Sydney, and that led me to finding out a little more his plans.

His unsuccessful quest to build a casino in Sydney dates back to 1986 when Barrie Unsworth was the Premier of NSW.

The proposed location was not where The Star casino is located. It was planned for Darling Harbour on the current site of the Darling Park office complex and Cockle Bay Wharf.

On November 10, 1986, Trump's intentions to seek a casino licence were reported in The Sydney Morning Herald.

The hotel and casino complex would be designed by architect Harry Seidler, who would be flown to view his casino's in Atlantic City, New Jersey to guide him in creating the design.


Sydney's a wonderful city. and if properly done, this could be a tremendous success for Sydney and everyone involved.  It's a great concept, if it's well executed.

He did face competition with up to a fifteen tenders involved and was shortlisted as one of five tenders in December 1986. In May 1987, Trump had been eliminated with Genting and Civil & Civic the only contractor remaining. They also would eventually be dropped.

Like the scrutiny with James Packer & Crown Resorts in terms of police and government checks with his project at Barangaroo, Trump appeared to try to advert these checks as reported by The Sydney Morning Herald in May 1987. Think about his reluctance to give details as part of his presidential campaign relating to his business dealings.

Trump continued his campaign for several years and it bubbled back to the surface in 1990. He told The Sun Herald on April 22, he said Sydney would have one of the world's greatest casino's. Another interesting comparison with James Packer who wants Sydney to have the world's greatest casino. He did feel that the State Government wasn't interested.

We probably lost an opportunity from the same ineptness from our politicians that Trump seems to believe is plaguing politicians in his home country. If you look at the history of his "empire" of three casinos, they were doomed to fail. His third casino Trump Taj Mahal opened in 1990 in  Atlantic City. Upon opening it was the world's biggest casino. Struggling to pay debts, the casinos were floated on the American Stock Market as Trump Hotels and Casino Resorts in June 1995.

Financial problems continued to plague the Casino's with Trump in charge and the company declared bankruptcy in 2004. It is believed that Trump moved away from the company in 2006 and still battled with threats of bankruptcy for the next decade. It was not helped by the Global Financial Crisis of 2008-09

Two of his Atlantic City casino's no longer exist Trump Plaza closed in 2014, Trump Taj Mahal closed this year. However, his third casino in Atlantic City - Trump Marina was sold and is now a second incarnation of the Golden Nugget Atlantic City Brand.

So if Sydney did have a Trump Hotel & Casino, it would still be around.

It's obvious that the State Government would not want a casino to close. It might have meant a change in management at worst to keep it going.


Sydney is a major international city and a popular tourist destination for international tourists. Atlantic City has had competition from Las Vegas and closer to home in the United States, the rise of gambling in New York, Pennsylvania and Maryland and preference for air travel.

As for location, it would have been located as mentioned on the current site of the Darling Park complex and Cockle Bay Wharf.

But even if Trump Sydney was turning over a profit, it may have had to subsidise the operations in Atlantic City and service the debt. It may have not even been enough to save them.

Had Trump been put in a position to sell, it would probably have been too late for Crown to buy the casino with preparations for his Barangaroo Casino Resort well advanced in 2014.

Then again its only predictions.
Posted by Fabian Amuso at 00:00 No comments: 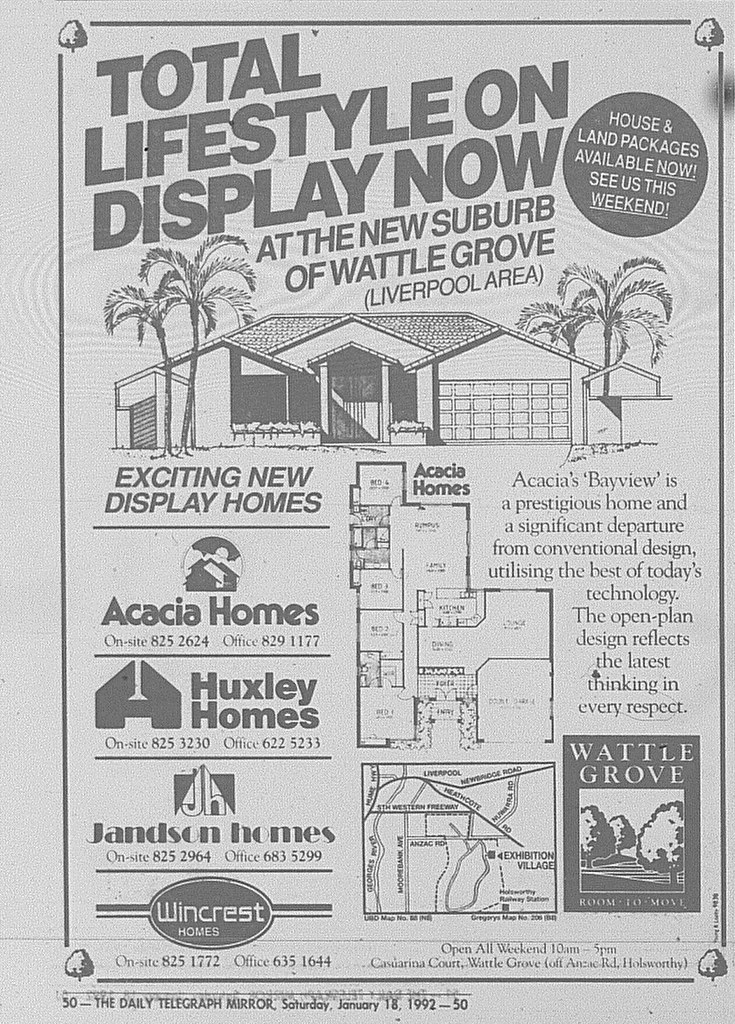 I am currently on a teaching appointment to a school in the Illawarra region and I am dependent on the F6 Southern Freeway (Renamed Princes Motorway) to get me there in just one hour.

I am one of thousands of commuters that are dependent on the freeway to get us from Sydney to Wollongong or vice versa each day, whether it is for work, education (University of Wollongong), to visit family or escape Sydney to visit the Illawarra or South Coast. It acts as a lifeline between the two cities.

In past years, a trip by car to Wollongong entailed one to navigate the old Princes Highway and then snake their way down Bulli Pass to get into Wollongong. It was not a safe trip either.

Planning for the freeway did begin in the 1930s but World War II halted planning. This was revisited in the 1950s with the vision to build a freeway from Sydney through to Wollongong. A corridor was designated from Waterfall to St Peters and remains untouched, though a number of parks run into the corridor like Scarborough Park at Kogarah. The only section built was Captain Cook Bridge at Taren Point which opened in 1965. Meanwhile, a freeway corridor was reserved in Wollongong, which incorporated Mt Ousley Road which had been built in World War II to improve transport movements from Sydney to the Illawarra. 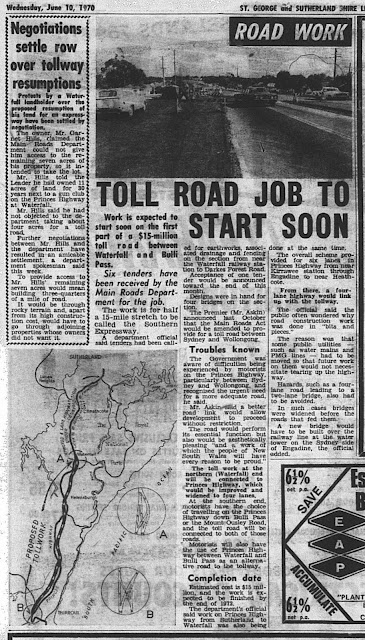 The corridor from Waterfall to Bulli Tops was gazetted in 1952. Approval to construct a km tollway was given in 1970. Construction commenced in June 1970. After delays in construction (original completion was late 1974), the $18 million tollroad was officially opened to traffic on July 24 1975 by NSW Premier Tom Lewis. The premier hailed it as a "masterpiece of design and workmanship". Motorists were charged a toll of 40 cents to drive between Waterfall and Bulli Tops. With a speed limit of 110km/h, a person can cover the entire 22 kilometre freeway in just 12 minutes. 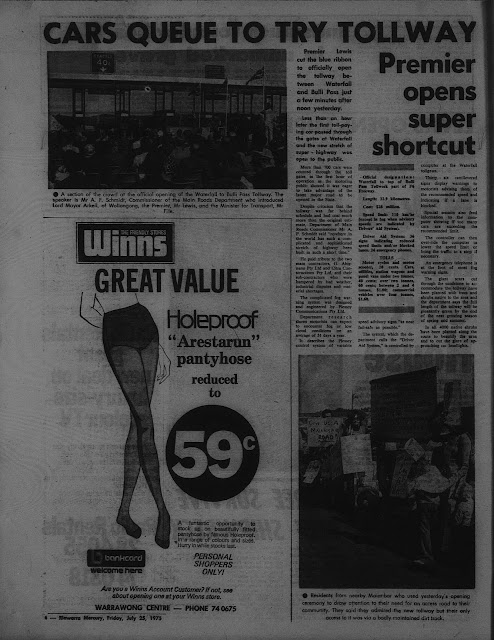 With the route prone to fog, electronic signage was provided to alert drivers to changes in road conditions including variable speed limits. This is shown in the WIN News Illawarra archives which was shown in 2015 to mark its 40th anniversary.

Tolls were abolished in 1995 to encourage heavy vehicles to use the freeway instead of the Princes Highway which "had a poor accident record", and reduce business costs. 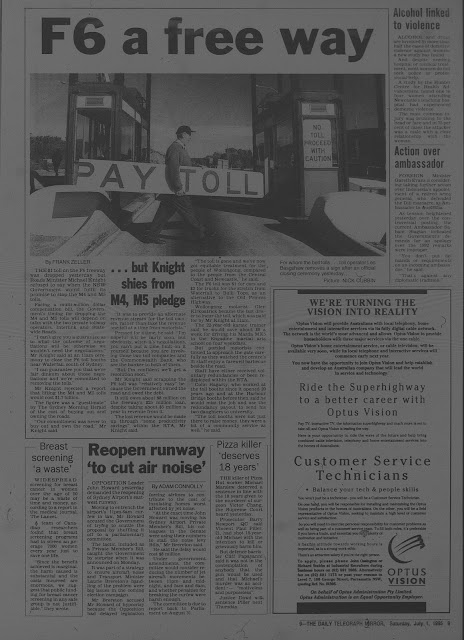 In 2000, an interchange was opened at Helensburgh to improve access to the suburb along with Stanwell Park.

As for linking the (now) Princes Motorway into Sydney's network of motorways, the planning continues more than six decades later. The NSW Government has now referred to the southern freeway as "SouthConnex" and is planned to be a priority once the NorthConnex and West Connex projects are completed. Below is a recent report from Seven News relating to the F6 Motorway.

This week, we head to Sussex Street in the city where I share with you a 1995 advertisement for the Astoria Tower. 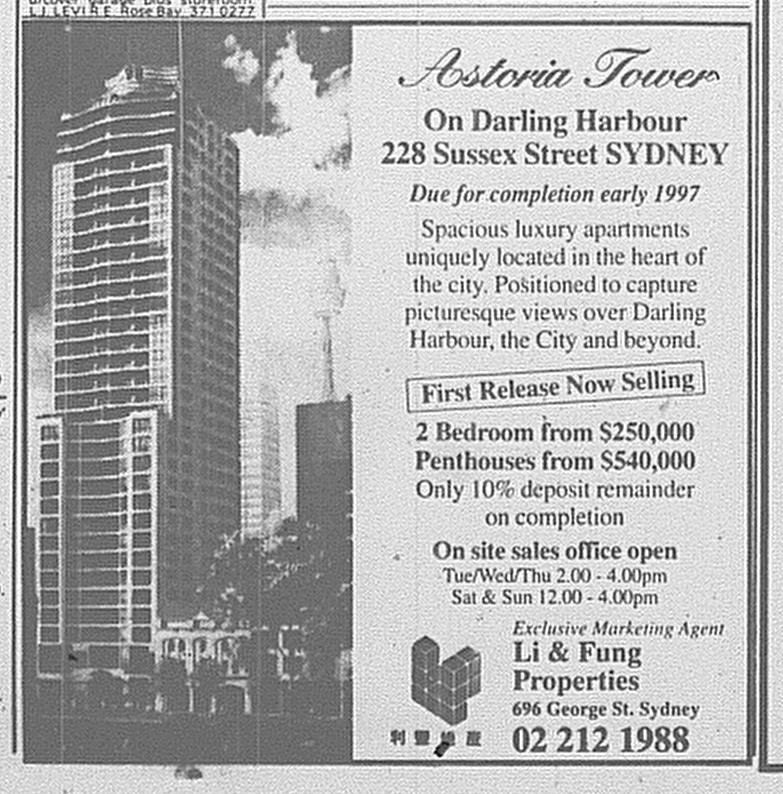