Below is a Neeta Homes advertisement that appeared in The Daily Mirror back in 1970. It also promoted their exhibition village on the Epping Highway (Epping Road) at Marsfield. This was located between Sobrano Road and Balacalva Road. 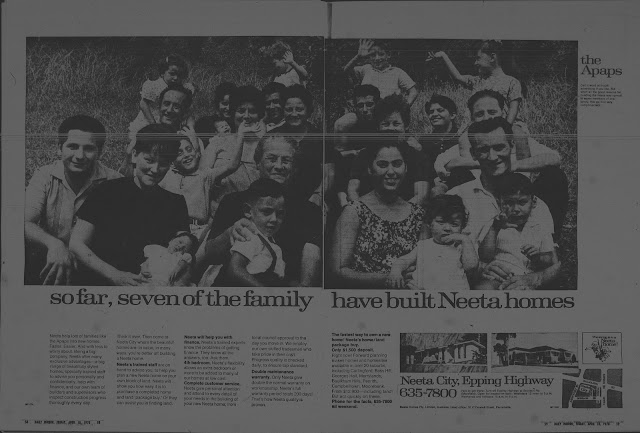 I've decided to turn last weeks entry on Miranda Fair/Westfield Miranda into a series on Westfield as it motivated me to go a "little further" into the evolution of the shopping centre.

In the mid 1970's, Ansett Airlines undertook an upgrade of their terminal (now T2). In 1974, they published a two page spread in The Daily Telegraph to inform travelers of the construction. The scan below is from the edition published on September 2. 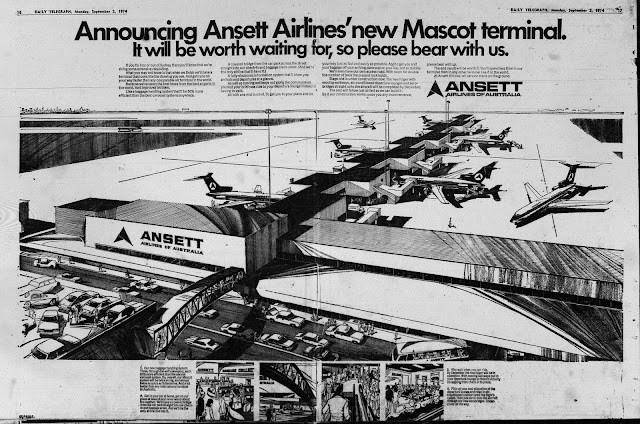 The upgrades made it possible for a person to be dropped off in the carpark and go to the gate without venturing outdoors through using a skybridge linked in the carpark. All gates would have aerobridges and facilities would use the latest technology.

Below is a Landcom advertisement from 1995 promoting blocks of land at Narellan Vale. I have included a link to approximate location within the suburb today (Google Maps). 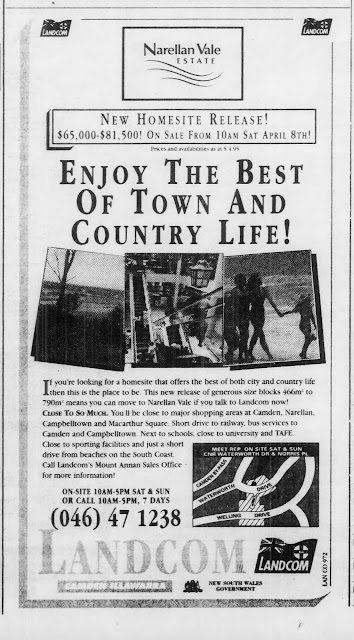 1962: The Genesis of Westfield Miranda 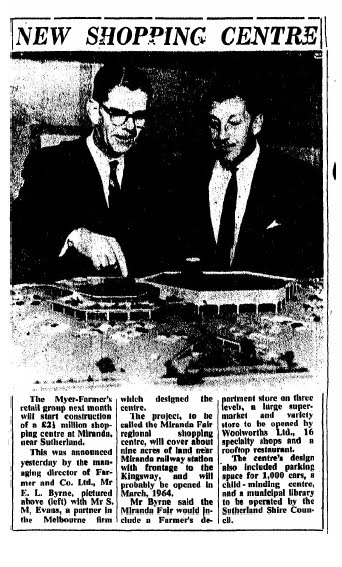 It also includes a dining precinct and Event Cinema complex.

The centre also has a rich history, which lives on the reference to Sutherland Shire residents by its original name of Miranda Fair.

Did you know that the centre was not originally a Westfield shopping centre?

In 1962, the Myer Corporation (Myer), the parent company of Sydney department store chain Farmers unveiled plans to build a regional shopping centre on nine acres of land near Miranda railway station on the Kingsway.

The centre would include a Farmers department store, Woolworths Supermarket and variety store, 16 speciality stores and a public library.

Estimated cost was 2.5 million pounds ($5 million dollars) with an anticipated completion date in 1964.

Upon completion, it was anticipated to be the second largest regional shopping centre in Sydney after Warringah Mall (under construction) which had fifty stores at its opening in 1963.

Observatory Tower in Kent Street, City once was an office tower, home to IBM but during the mid 1990's was part of a wave of buildings along Kent Street near Observatory Hill that was reborn into luxury apartment buildings with highly sought harbour views.

Below is one advertisement dating from 1997.

1998: The first plan for a North West Sydney rail line 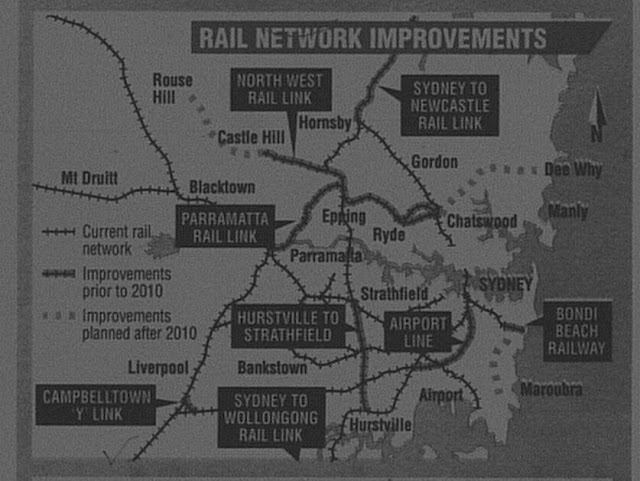 This week, I look back at when the first proposal for a rail line to serve the North West was mooted.

It was in 1998 when Labor was in power, led by Bob "the builder" Carr and Carl Scully was Transport Minister.

In November of that year, Action for Transport 2010 was released, providing a decade long plan for the delivery of transport infrastructure across Sydney covering all modes of transport.

With rail, the ambitious plan included a rail line running from Chatswood to Parramatta (via Epping), another line running from Hurstville to Strathfield, extension of the Eastern Suburbs line to Bondi Beach, a Y link at Casula and upgrades to the intercity lines running between Sydney, Newcastle and Wollongong.

There were also plans for a branch line to run from Epping to Castle Hill with new stations at Castle Hill and West Pennant Hills. Completion was anticipated for 2010. Question to ask - Would trains run via the northern line or would they proceed to Chatswood and then the city (like how the Sydney Metro will evolve into).

That would make the delivery of heavy rail to Castle Hill a decade late under the 1998 plan!!! 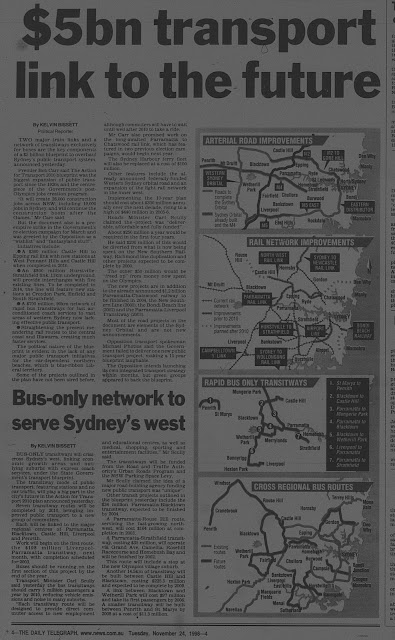 Below is an advertisement from 1966 promoting units in the "Hirondelle" complex at 7 Osborne Road in Manly. 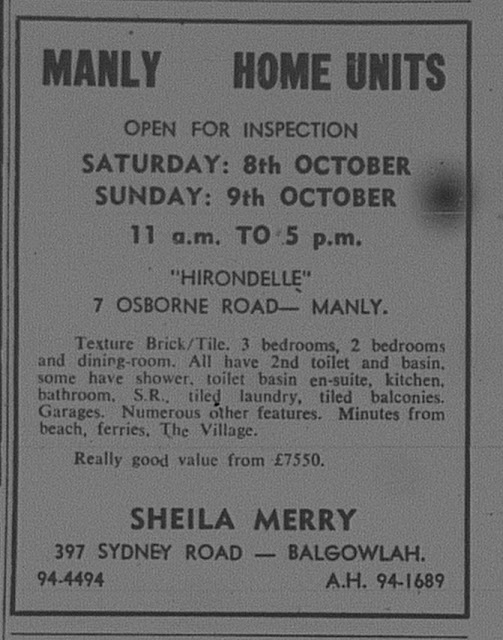 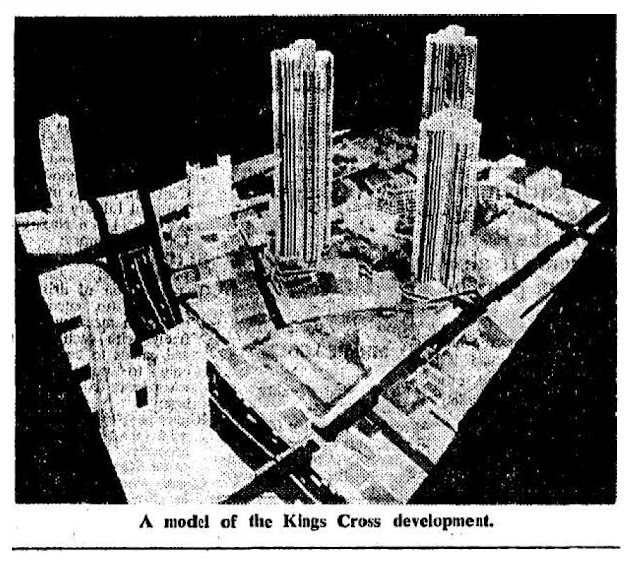 In 1970, plans were released for a 1500 unit development on a Darlinghurst site bounded by Darlinghurst Road, Liverpool Street, Forbes Street, and Farrell Avenue.

This included three towers with heights of:

The towers would rise over a landscaped podium with the towers consuming just 25 % of the five and a half hectare site.

Apart from "resort style" facilities, there was also a small retail complex to be built to provide for the residents. 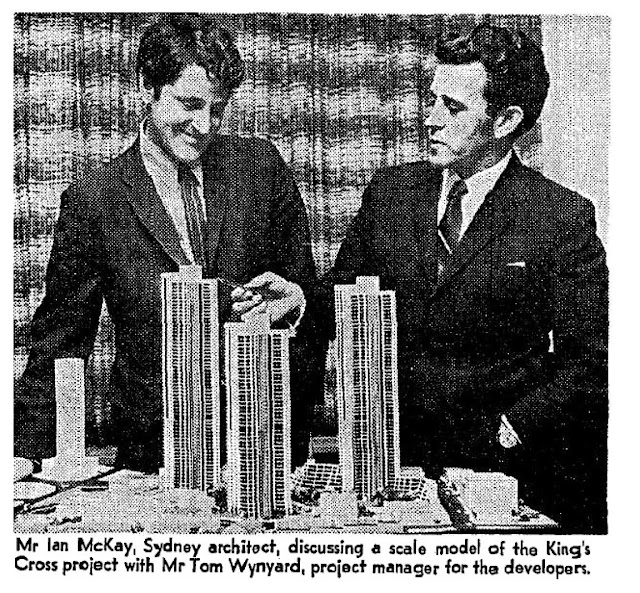 What would have happened had it been built?

Firstly, the nearby Horizon Tower would not be so lonely!!! It would struggle for attention like it does today.

But I do believe if events had stayed the same, the towers would still dominate the area today and would rather to a testament to bad planning of the period. With development limited, they could remain there uncontested.
Posted by Fabian Amuso at 00:00 No comments:

Below is a Mirvac Homes advertisement from 2001. 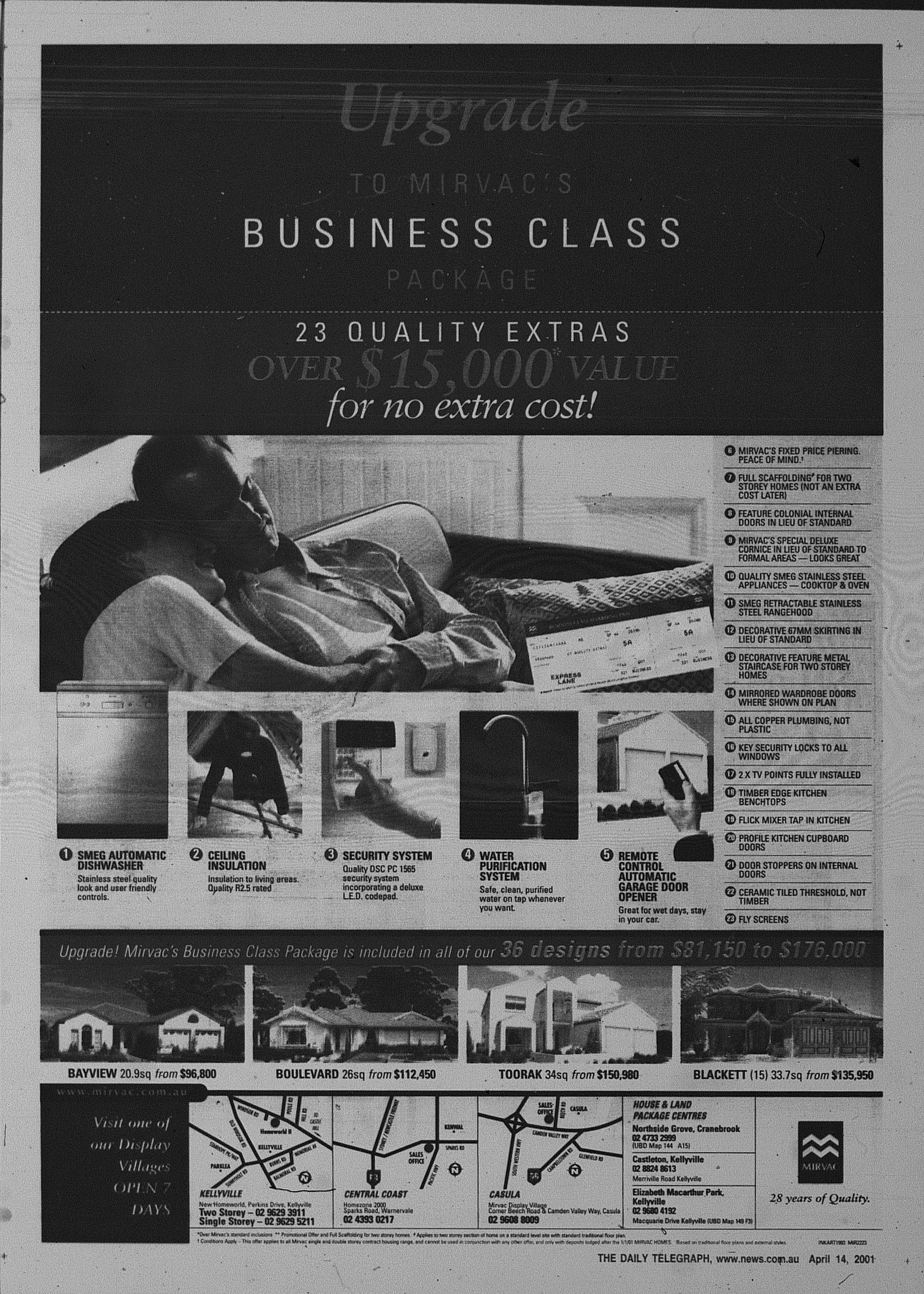