Today is New Years Eve and this entry will look at how Sydney marked the arrival of 1995.

How Sydney celebrated New Years Eve in the 1990's was big compared to the decades before it, but would pale in comparison to today. It has become an annual custom when looking at entries from the 1990's to highlight the "big changes" that have occurred since.

But each year represents a step in the evolution of New Years Eve Celebrations in Sydney.

In previous entries, the key developments in the modern evolution of New Years Eve Celebrations in Sydney have occurred:

1989 - Introduction of a major New Years Eve spectacular on Sydney synchronized to a musical soundtrack, simulcast on radio.
1990 -  First launch of fireworks from the Sydney Harbour Bridge as part of the New Years Eve Fireworks (First major launch for any fireworks show was Australia Day, 1988 which was the Bicentenary of Australia. At the 75th Anniversary of the Royal Australian Navy in 1986, fireworks were released only from underneath the road deck). Alcohol Free Zones were introduced.
1993 - Reintroduction of midnight  displays in Central Sydney at Darling Harbour and Sydney Tower.

New Years Eve fell on a Saturday in 1994 which gave people an excuse to go out that Saturday evening.

The (9pm fireworks) was telecast for the first time on Channel Seven. It was a delayed broadcast from 11:55pm to 12:30am. It also screened in Brisbane at 12:15am local time. 2DAY FM played the soundtrack live as the fireworks exploded above. Those attending  to bring a portable radio with them.

As with previous years, the fireworks were released near the Opera House and from The Sydney Harbour Bridge.


A midnight display was provided at Darling Harbour and fireworks were released from Sydney Tower to welcome in 1995.

The Sun Herald (January 1, 1995) featured the Sydney Harbour Bridge in fireworks on Page One. 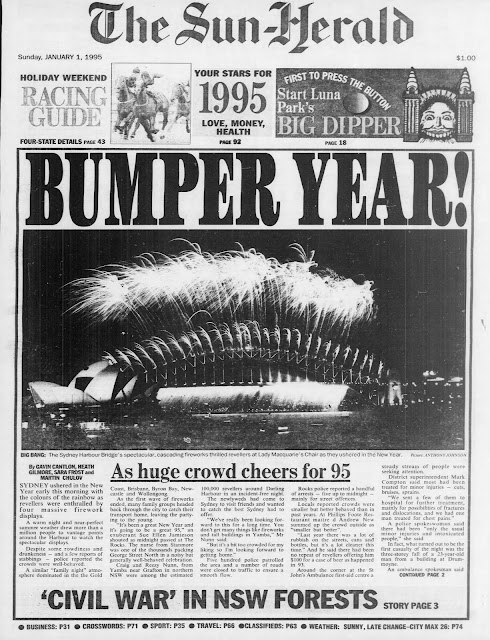 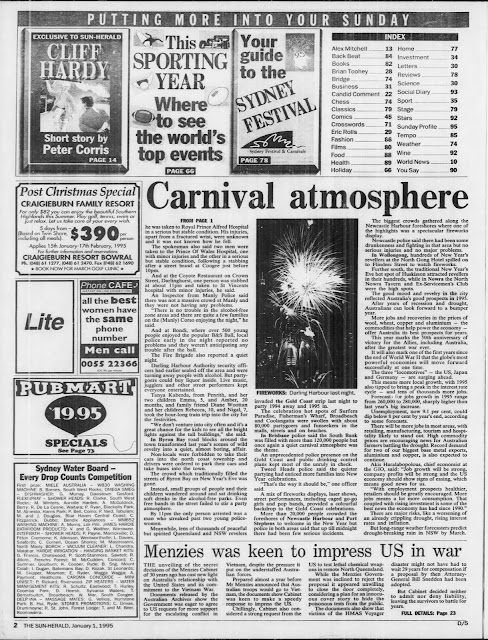 The Sunday Telegraph (January 1, 1995) decided not to feature the fireworks from Sydney Harbour on Page One, opting for a photo of the midnight fireworks show at Darling Harbour. 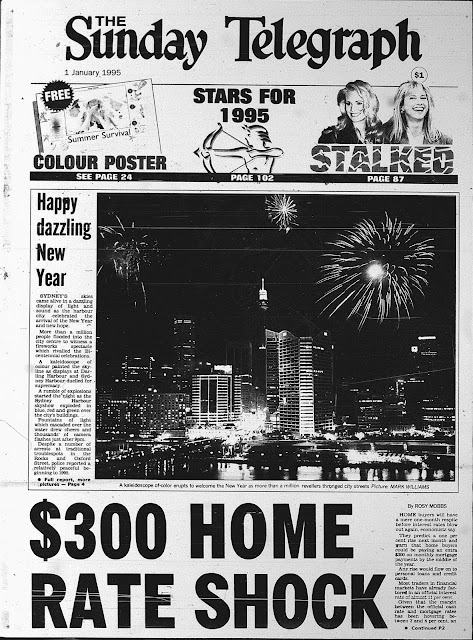 Attendances according to reports in both newspapers put the estimated crowd attending festivities at one million. The previous year reported either 1.5 million or 350 000 depending on what newspaper you read (either The Daily Telegraph Mirror or The Sydney Morning Herald. We can say that New Years Eve 1994 was the first to crack the one million mark for attendance.

The newspapers didn't report on anything extraordinary on the festivities. Police were happy with  and there was the usual crack down on drunks with "some arrests".

Public transport was encouraged. There were no delays compared to the year extra services were provided as per usual on all modes. There were diversions and changes to routes to road closures and congestion. Below is a State Transit advertisement as published in The Daily Telegraph Mirror on December 31, 1994. 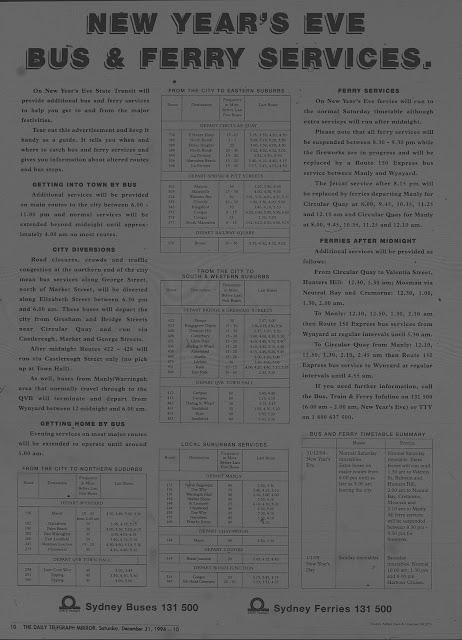 On reflection, it appeared that Sydney now had begun to establish a New Years Eve tradition of a mid evening fireworks show on Sydney Harbour and Midnight fireworks at Darling Harbour and Sydney Tower. The people of Sydney had warmed up to a major celebration of the arrival of the New Year. It also had attracted visitors from regional areas, around the nation and around the world.

As the 1990's continued, it would remain the same until the move to midnight celebrations in 1998.

I wish you all a very Happy New Year.

It is an annual custom to wind the clock back 25 years to remember how Sydney marked Christmas. This year it is 1994.

Usually, I have been able to share retail advertisements , but at the time of going through the reel did not collate them.

Carols in The Domain was held on Saturday. Crowds in 1994 were reported to be 120 000, but I think the figure was more 100 000. For safety reasons, to attain that capacity is difficult

With Christmas Eve on the last Saturday before Christmas (Fell on a Sunday), the carols were held earlier than usual -  December 17.

The Sunday Telegraph was published on Christmas Day. Traditionally, newspapers do not publish on this day in Sydney.

Below is Page One plus a feature on those who had to spend the day working. We should be grateful to those who do have to work so that we can enjoy the day and keep essential services running. 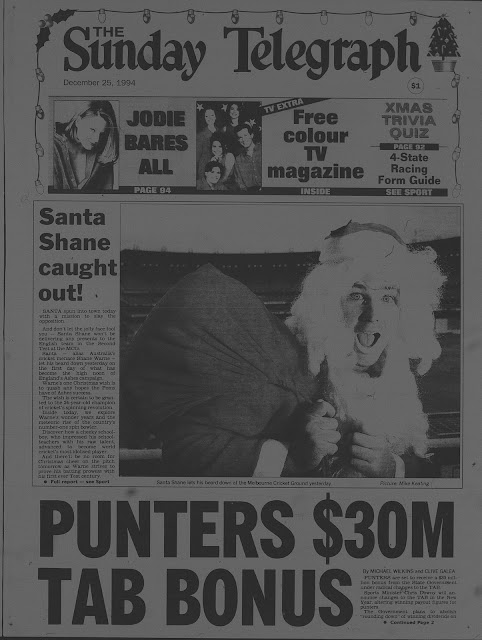 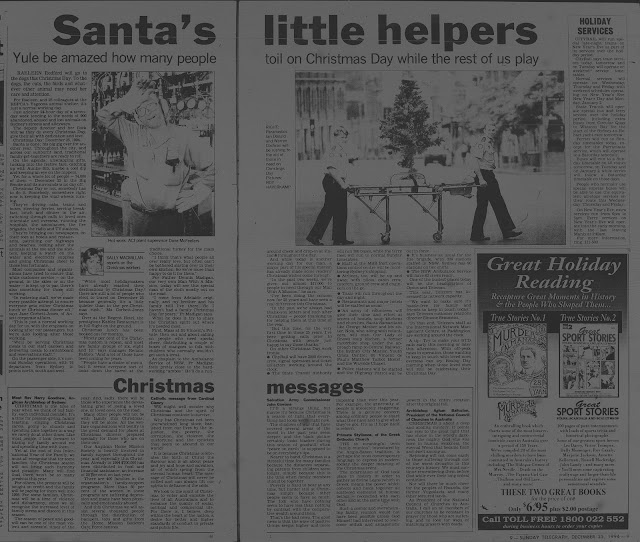 As in 2019, NSW was affected by drought. I remember that it rained on Christmas Day in 1994. The rain stretched inland in parts of the state. The drought ended the following year. Could we see this in 2020? Below is coverage from The Daily Telegraph Mirror (26 December 1994). 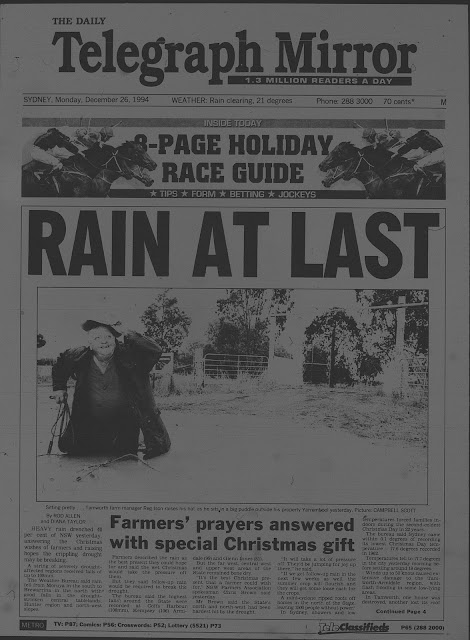 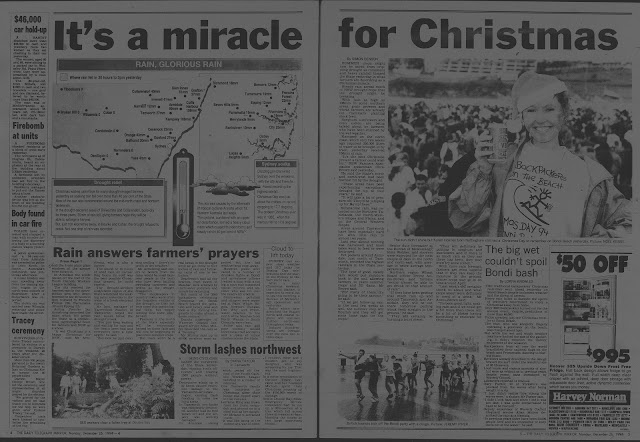 The rain did not spoil celebrations for those at Bondi Beach (see above) with backpackers converging on the beach to celebrate the day together.

Finally, I wish you all a very Merry Christmas.

Remember This?  back for the Summer.

The corner of Rocky Point Road and Russell Street in Sans Souci is occupied by a BP Petrol Station. date back to 1962 when it opened as an AMOCO petrol station. Below is a full page advertisement to promote its . 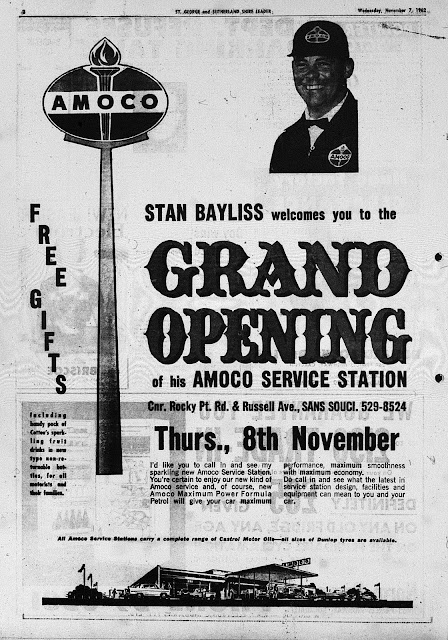 For the next two weeks, we will publish on Tuesday with Christmas Eve and New Years' Eve on those days. You will be able to find out how Sydney marked Christmas in 1994 and welcomed in 1995.
Posted by Fabian Amuso at 00:00 No comments:

Property Advert of the Week: The Madison, East Sydney (1997)

This is our last Property Advert of the Week  for 2019.  Below is a 1997 newspaper advertisement for The Madison in East Sydney.

I look forward to continue to share old Sydney real estate advertisements in 2020. Our first entries will return in February.

This month, the Eastern Distributor will celebrate 20 years of service to Sydney motorists. The motorway was opened on December 19, 1999 although the on and off ramps at William Street did not open until July 23 2000.

The opening of the Eastern Distributor also led to significant changes in traffic flow in inner Sydney. South Dowling Street was reduced from three lanes to two in each direction while and Bourke Streets were restored into two way streets. Crown Street had fed northbound traffic while Bourke Street carried southbound traffic.

This was not welcomed by motorists, some of whom refused to initially pay the one way toll ($3) and continued their old habits believing that there would be a "rat run" on offer. Traffic changes placed priority on local traffic and increased travel time for the "rat runners". Some were not aware of the changes and had to make long detours to reach their destination.

It did lead to rethinking on whether or not toll free routes should to motorists. Now it is  expectation that one should be provided e.g. Parramatta Road acts as a free alternative to the M4 and Westconnex Motorways.

For others, the new motorway was a blessing which meant no longer needing to drive through inner Sydney streets to reach the city or cross the . They could avoid up to 17 traffic lights.

Below is some media coverage from The Daily Telegraph. 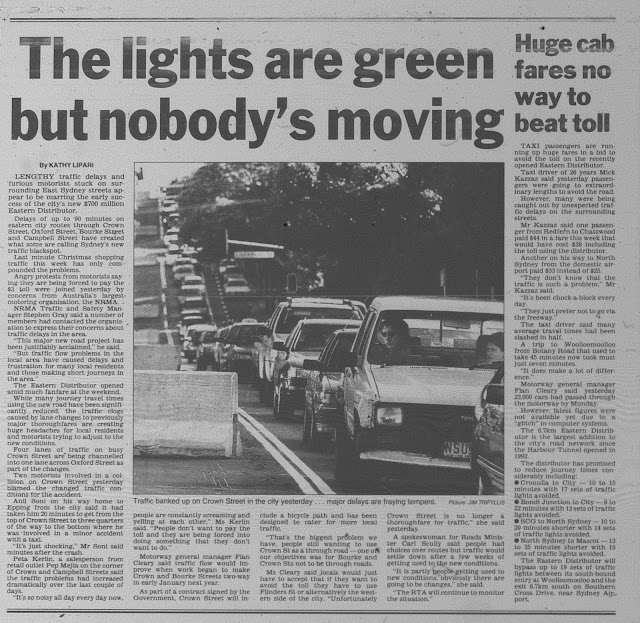 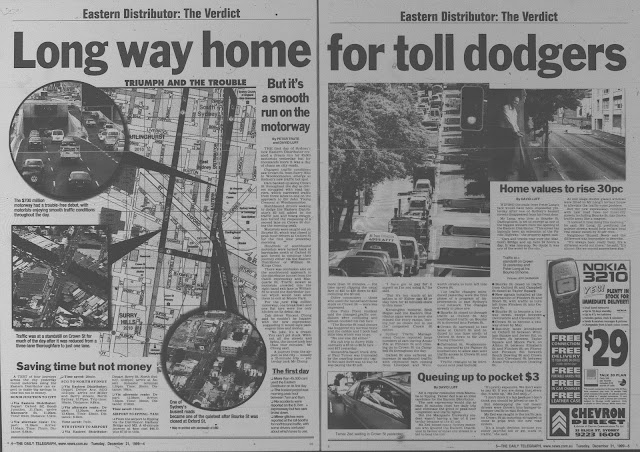 This week, I will share a 1997 newspaper advertisement from Walker, promoting developments in the inner city and inner west. 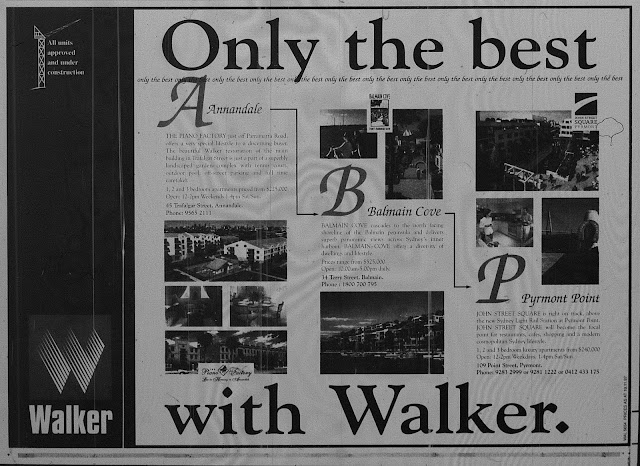 Source: Walker Corporation. 1997. "Only the best with Walker" (Advertisement). The Sydney Morning Herald, November 22: 24RE (Real Estate Lift Out).
Posted by Fabian Amuso at 00:00 No comments: 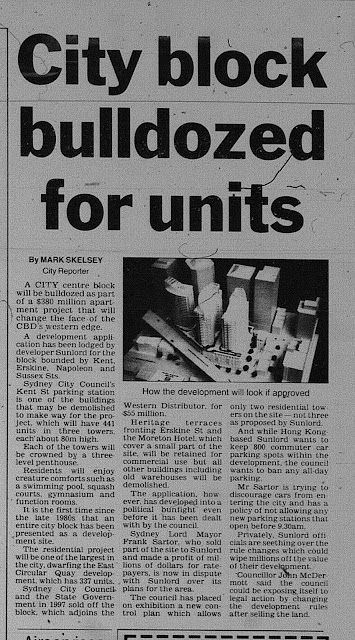 The block bounded by Kent, Erskine, Napoleon and Sussex Streets (KENS) is home to Westpac Place, which is regarded as one of Sydney's largest buildings in terms of office space (also in terms of space per floor).

Twenty years ago, there was a scheme for the site that involved the construction of three 80 apartment towers which caused tremendous controversy for Sydney City Council. The council refused to approve the scheme because the towers were too close to each other, but were willing to approve the scheme if one tower was removed.

Developer Multistar took this to the Land and Environment Court and won approval.

Even the tower we see today had its difficulties in gaining approval - bulk, height and wind tunnel concerns were problems, but construction began in 2003 and was officially opened in 2006.

Fast forward a decade and a half and the Barangaroo development the building appear small. 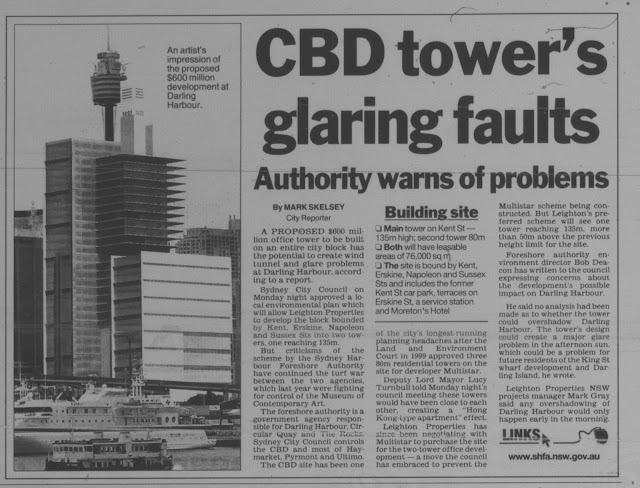