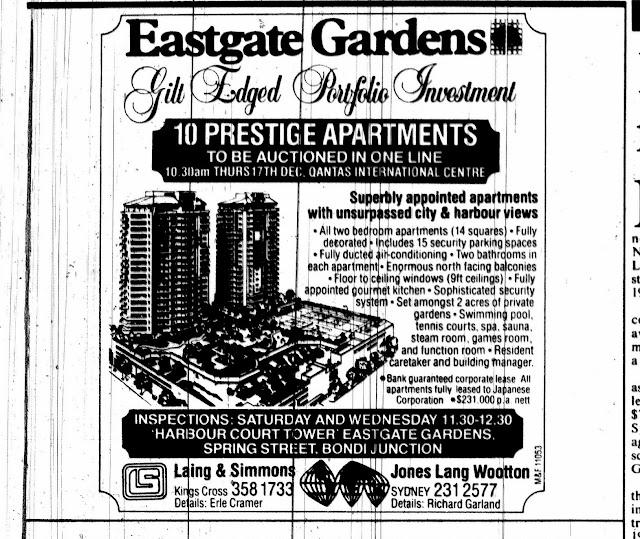 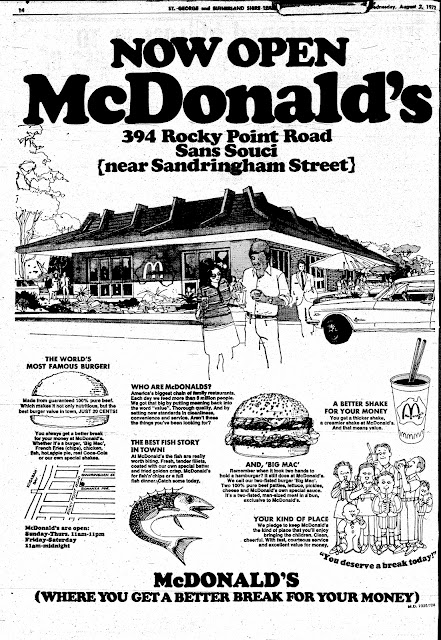 McDonald's marketing has come a long way in Australia over the decades. Quite interesting to note in this advertisement for the opening of the McDonald's store at Sans Souci isn't dominated by the golden arches themselves (featuring only in the illustrations.

McDonald's was the "new kid on the block" in those days. They even had to explain who they were and were already claiming to be the biggest fast food chain in Australia. 20 cents got you a Big Mac and you could get fish and chips.

No breakfast menu's just yet but they did open until late 11pm or midnight depending on the night of the week.

McDonald's has shared the site with KFC (Kentucky Fried Chicken). A decade ago they managed to merge the site with the adjoining site of the former Post Office on Rocky Point Road and redeveloped the site. This meant the demolition of the original stores. They also swapped locations within the site. The rebuilt McDonald's also included a drive-thru service, playground and McCafe which was not available in the original store. 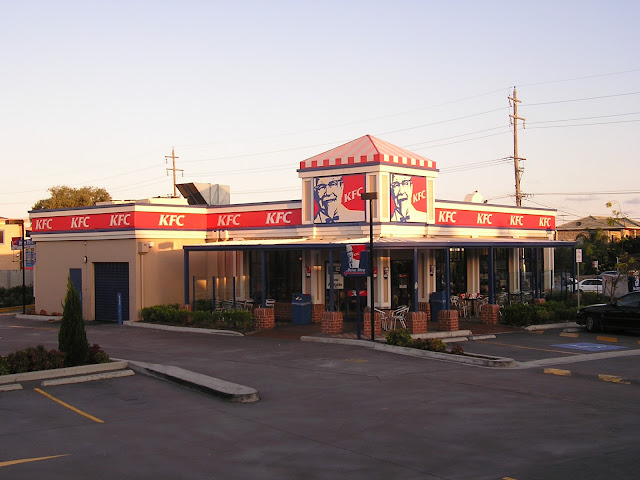 Property Advert of the week: The Cecil Apartments (1991), Cronulla

Each Saturday, I hope to share with you a real estate advertisement for various housing and commercial projects in Sydney. I thought this week I'd start somewhere local - Cronulla. 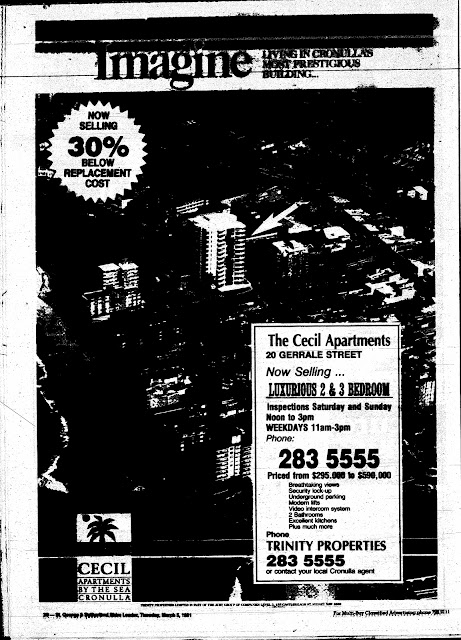 Sydney was in the middle of a recession not to mention a collapse in the property market. They were desperate to get some buyers promising some significant discounts.

I wonder how much they would sell two decades later.
Posted by Fabian Amuso at 00:01 No comments:

Legendary newsreader Ian Ross died recently from Pancreatic Cancer at the age of 74. I recently found this advert promoting the return of TCN 9's News anchor Brian Henderson from holiday's in 1967.

Henderson led the team of reporters which included a young Ian Ross with his trademark hair. Other reporters on the team included Brian Bury (I remember him as the weatherman for Channel's 10 and 7 in the 1990s), David Low, Kevin Sanders, Bob Walters and Tony Charlton. Ian Ross had already established himself and was yet to make many more great achievements. We as Sydneysiders will miss him. Rest in Peace
Posted by Fabian Amuso at 19:14 No comments:

Ever wondered what other concepts were out there relating to The Star during the planning phases in the 1990s? Here is one that looks drab and in the 2010s would become quite dated. 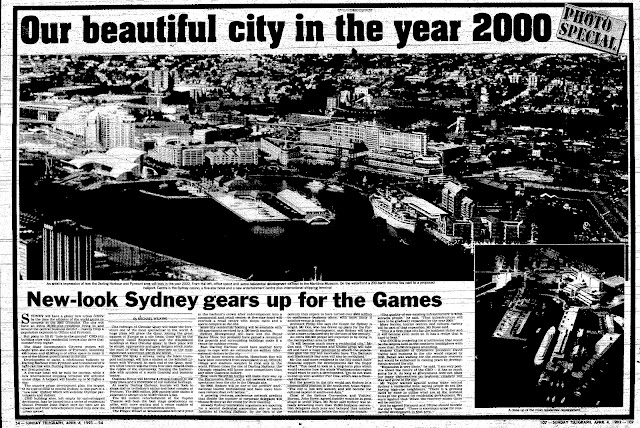 We as Sydneysiders may be cringed by the three towers that make up The Star, but compared to this, its more conservative.

The boom in commercial development during the late 1960s and early 1970s spread over the Harbour Bridge to engulf North Sydney.

The Sydney Morning Herald managed this amazing aerial shot of the North Sydney CBD, showing 27 projects that were either under construction, approved for construction or proposed.

1971: The struggle to provide hotel rooms

According to an article in The Sunday Telegraph in March 1971, Sydney had only three hotels that were international standard: 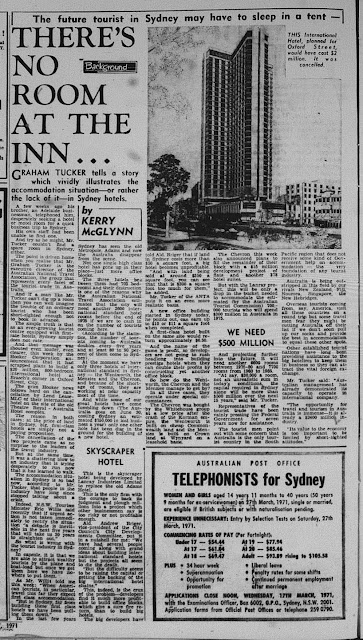 The concern was that Sydney was not responding to the need to build more hotel rooms as tourists flocked to Sydney. Only the Lanray Centre (Hilton Hotel) was under construction. It was like that over the past few years until recently but James Packer's Crown Resort will hopefully be one step in the right direction along with the new hotel slated for Darling Harbour. Boutique hotels were virtually unheard of then and only now, we're embracing them like the hotel proposed by Greenland for the former Water Board building in Pitt Street.

Catering to tourists has always been a challenge for Sydney. We have taken some steps lately, but it will always be there.

But why this situation? The cost of building in Sydney. One gets a better return with either an office tower (like in the 1970s and today) or in more recent decades, apartment towers.

In the 1990s there was a boom in hotel rooms in central Sydney to cater to visitors for the 2000 Olympic Games. After the games, there was a massive oversupply in the market. Tourist numbers fell following the September 11 terror attacks in the United States. Add a booming residential market and there was a problem. Kings Cross was the traditional centre for hotels but now the city centre had what the visitors wanted and operators decided apartment conversion was the go.


The price of the land had risen. Several years later, Sydney was paying the price for their loss and now we are merely catching up.

If we cannot provide the rooms, the tourists will not come. James Packer knows this and that's why he wants to spend $1.5 billion to get his casino resort at Barangaroo.
Posted by Fabian Amuso at 17:51 No comments:

1969: Plans for the AMP Centre are released

The AMP Centre at Circular Quay is square in terms of its shape, but did you know it was meant originally to be rectangular according to its original proposal that was unveiled by the AMP back in 1969? They were aiming for completion by 1974.

The height of 612ft when converted measures to 187 metres, which was the final height. Peddle Thorp and Walker were the architects.

At this stage, I have not yet located an article that confirms the changes that resulted in the tower that did rise. What we do know was that tower was not finished until 1976.

Photo taken by the author.

Posted by Fabian Amuso at 10:01 No comments:

Today the NSW State Government announced plans to accquire 65 new trains to run on intercity routes serving the regions surrounding Sydney. The Unsworth Government (ALP) in 1988 announced that new "supertrains" were due to come into service by the end of that year. It never happened. 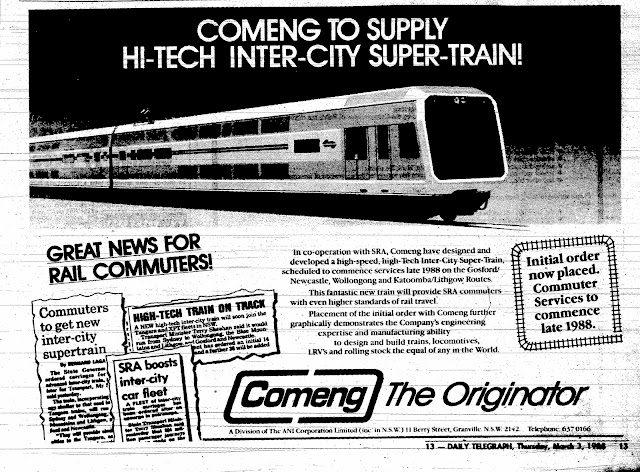 Six years later we got modified outer suburban versions of the Tangara train with higher seats which could bend, luggage racks near the doors and toilets. They were merely scaled down from what was proposed. 2007 saw the introduction of OSCARS, which were really millennium trains modified again for outer suburban travel.

At Kings Cross, we have the very famous neon Coke sign which has been at the top of William Street for around the past forty years. In 1990, Coca Coca Amatil (Coke's Australian operations) wanted to erect a second sign above their headquarters at the time in Circular Quay. However it was to be a traditional advertising billboard which I think today would have been outdated. I personally think a neon sign would have done the job better if Coke were that keen to have their presence by the harbour. There was some resentment by Sydneysiders because it was "desecrate" the area. 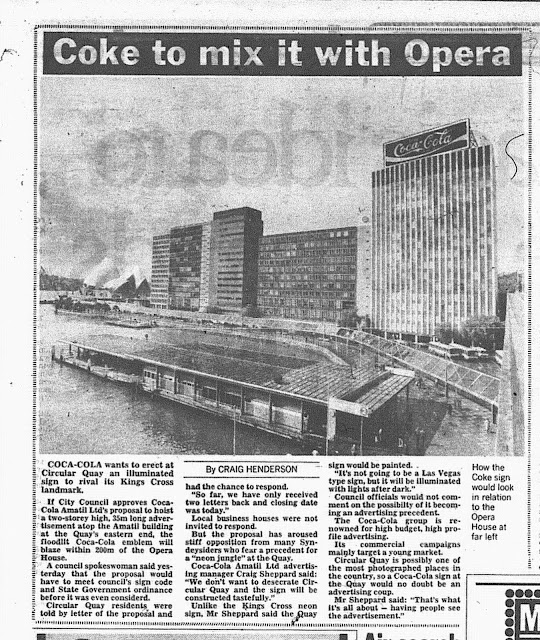 For over ten years I have contributed to Ozscrapers which forms part of the Skyscrapercity Forums. One area of contribution has been media clippings that I have sourced from newspapers relating to projects that were planned but never proceeded but also alternative or initial concept plans for projects that did get off the ground and shape our city into the World City that it is today.

Simply, I'm going to try and answer the question as to how our city has become the way that it is today.

For the time being, I will focus on the past fifty years, the period that my media clippings encompass.

From time to time, I will also share flashbacks of key news events in Sydney but also even share about the way we have lived our lives too.

It is quite broad but exciting.

If you can help out or provide feedback, please contact me at fabianamuso@hotmail.com.