This was something, I didn't know about Grace Bros until I saw this. Once upon a time, it was possible to do all your shopping in one store, even your grocery shopping. In fact, they were happy to brag about the future of supermarket shopping.

I am not a fan of the duopoly between Coles and Woolworths and if the Department Stores want to stay in the game, it might mean going back to some of the ideas of the past. One of them is supermarkets. Billions are made by Coles and Woolworths each year and that says something. Spending on food is going up. Helped by cooking shows such as Masterchef or My Kitchen Rules, people's interest in cooking is on the up. Why cannot the department stores join the party? David Jones fortunately still have their Food Hall in their Market Street store, why not build on that? Even creating their own chain might be a start? 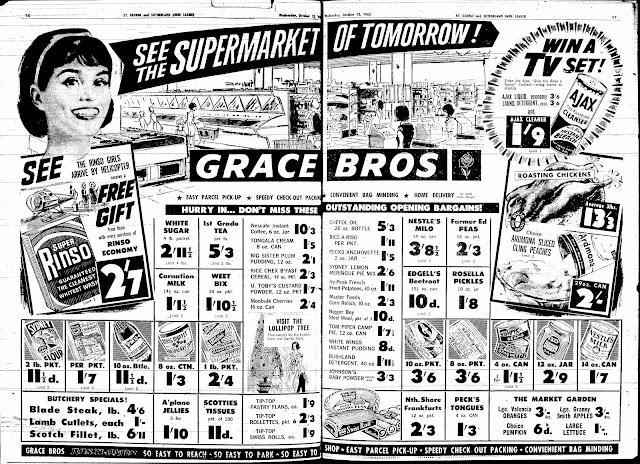 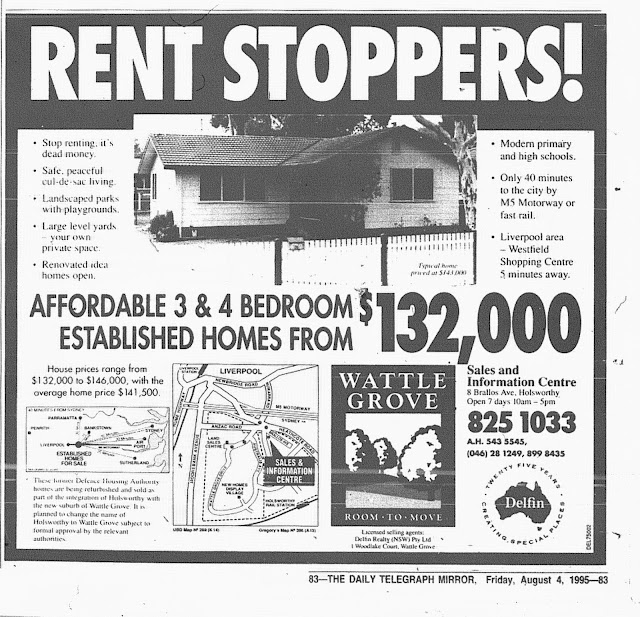 Within 12 months of this photo being taken, the former branch would be home to the news department of Channel Seven. Seven News, Sunrise and other Seven News programs would be produced from there.
Posted by Fabian Amuso at 00:00 No comments:

In Sydney, implosions of major city skyscrapers are not permitted, but Alan Bond wanted to "blow up" the Commonwealth Office Building at Chifley Square, now home to Chifley Tower.

Never happened of course, but obviously he wanted it to be a spectacle.

I'm glad it never happened. I question the safety of implosions of such buildings, and the potential dangers they irk.

And to watch it come down, that would have been very hard to see given how built up that part of the city is.

Property Advert of the Week: Eastlakes (1966)

Moving to Sydney's Eastern Suburbs, 150 pounds ($300) in 1966 was all you needed for a deposit for a unit at Eastlakes. According to the RBA Inflation Calculator, the deposit would be equivalent to $3600 in today's money. A two bedroom unit would have you set you back about $10 000 or about $120 000 when measured in current terms. The median price for a two bedroom unit today in Eastlakes is about $455 000 according to realestate.com.au.

Source: Parkes Developments Pty. Ltd. 1966. "Move in Immediately: And your rent pays off your home unit at Eastlakes," The Daily Telegraph, October 29:27.
Posted by Fabian Amuso at 00:00 No comments:

I was quite surprised when I came across this design for the Kingsgate Hotel at Kings Cross (Now Zenith Apartments). Instead of having an antenna atop the building, what appears to be a globe tops it off like that atop the Daily Planet Building in Superman. Personally, Kings Cross might have ended up with another icon alongside the Coke sign at its podium. I'm surprised that the Daily Telegraph didn't make the effort to comment on it.

I'm not sure at this stage why they took it off, but my bet is cost cutting??? 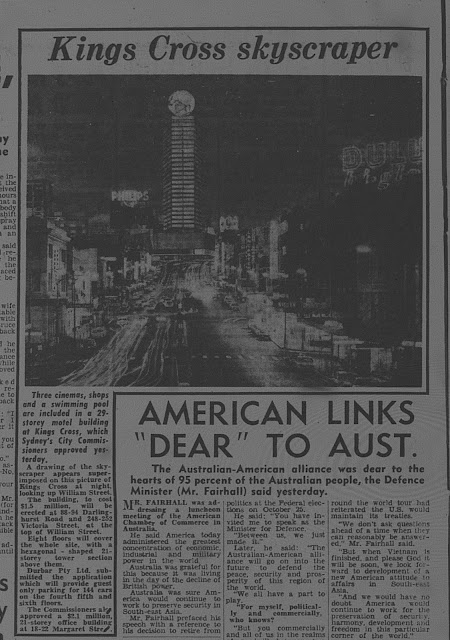 IIt has come to my attention that a post has been made on a Facebook Group "The Beatles Australian Tour 1964" relating to a blog entry relating to The Beatles visit to Sydney in 1964.

Lets clarify some points that the group has made:

"Just the effort that's gone in sourcing the finest images alone was enough for them to take home the gold,"


Isn't the point of blog entries here based on what has been covered in the papers? Much better than browsing Google Images. I'm under no obligation to source items from anywhere specific. I just wanted to share some images that I found, pure and simple.


"The image below was taken from the first two concerts." Magic!" 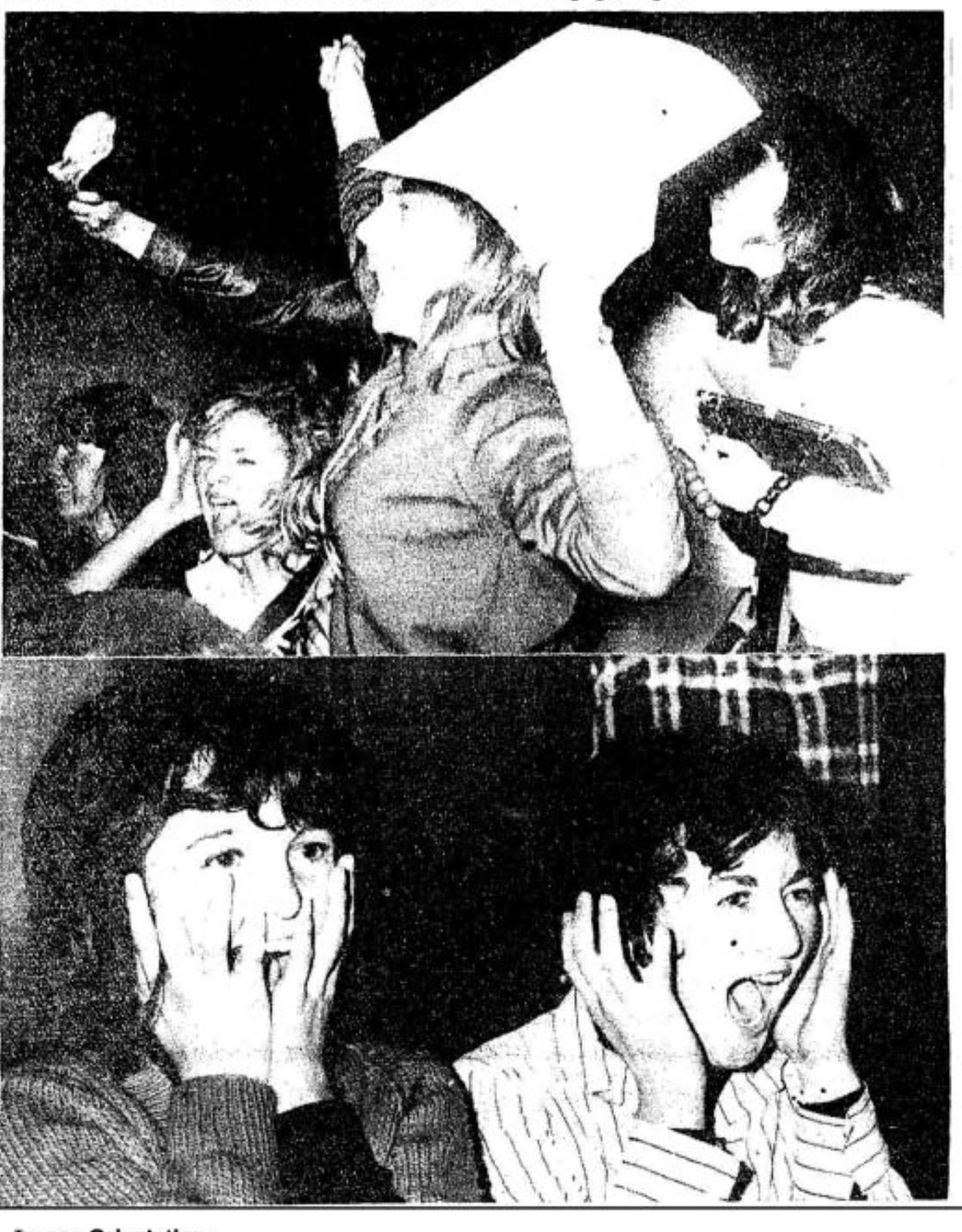 I will stand by my decision to post them because they were from the first two concerts. They sum up the emotions of The Beatles fans that attended the concert. The photos themselves were published on Page One of The Sydney Morning Herald on June 19. If those photos were "bad", they would not be on page one at all.

"The winner of the sh**tiest blog and recipient of the gold perpetual trophy for the next 50 years, goes to 'Fab Sydney Flashbacks' with their marvelous blog '1964: The Beatles in Sydney'"


I will not be bothered by this "award" which is not an award at all because there was no announcement about the award and the inviting of nominations. In fact they are probably going as low as saying that this blog is by far the worst. I think there is far worse out there. In fact one person goes on to comment that I am embarassment to all bloggers??? This blog has only been around two months. There was reference to other "entrants", but there was none.

Even worse is their factual error in giving this blog the name '1964 the Beatles in Sydney', when the blog is known as "Fab Sydney Flashbacks".

Plus they forget that this is not mean't to be a serious blog not one that is "painstakingly researched", though I try to be accurate as possible. At this point in time, this is not a professional blog, where I seek to derive an income.

I was only contacted about the wording of the Adelaide and Melbourne visits. I knew that Adelaide was the first city that they did concerts in but both Adelaide and Melbourne hosted the first few concerts of the tour. I was right in a sense. Yes I didn't word them right to start with but this was bought to my attention and changed to avoid confusion. If the members of the group were concerned, why didn't they have the decency to contact me about the errors.

I have also corrected the error relating to the concert statistics. Sadly it could have be done under more appropriate circumstances. Initially I had been led to believe that four concerts were staged in Sydney. Going by details, crowd numbers will be hard to guess and my initial 40 000 could be a conservative figure. The Sydney Morning Herald on June 19 reported a combined 20 000 watched the first two concerts, the next night is unknown while about 10 000 were reported at the final two concerts on June 20, going by an article on June 21 in The Sun Herald. The total over the six concerts would add to about 40-50 000, which is about halfway between the initial 40 000 provided by me, and the 60 000 that a member of the group is claiming. I'd like the group to mention their source/s in crowd figures. before they go and accuse me of being wrong

I know as a Teacher Librarian about the importance of reliability of information and have pointed out that this blog should be. In fact I strive for accuracy and absolutely welcome acknowledgement of errors by visitors. I do accept my mistakes in a constructive manner like the person who was concerned about the Adelaide and Melbourne visits, which I was happy to accept and oblige. I apologise for being inaccurate. We are human.

By the way I did make it clear, I only sourced material from The Sydney Morning Herald, as I was keen on presenting their perspective on the events of that time.

And for those who don't like what is posted here, go elsewhere. That's what I do when I'm not happy with what I read on a website.

Posted by Fabian Amuso at 21:31 No comments:

One of the first releases of land at Narellan in the south west occured in 1990 known as Narellan Gardens. The area itself has boomed in the quarter of the century since. It enjoys being located between the centres of Camden and Campbelltown.

The first release in February 1990 comprised of 45 blocks starting from $76 500 but you got 859 sq/m of land which is quite generous. Monarch Land were the developers.

The blocks of land are now in what has become the suburb of Narellan Vale.

As for the time spent commuting by rail, the advertisement is misleading in claiming it is 45 minutes by train to the city from the region. Several weeks ago, I pointed out that the trip takes about an hour. In the late 1980's and 1990's, the promise of high speed rail was in the news. Sadly that hasn't eventuated, and that would need a series of blog entries itself. 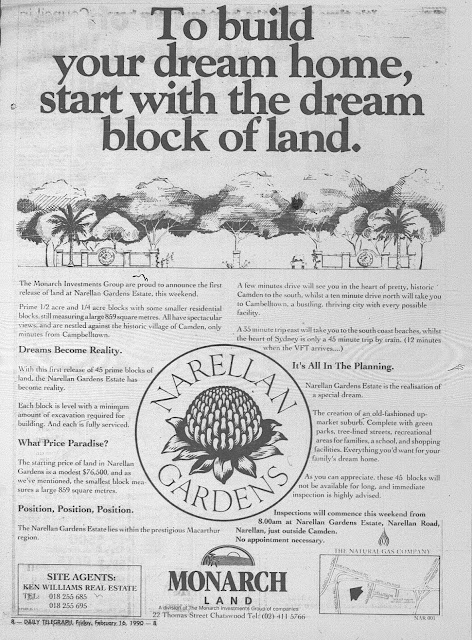 Did Narellan become "upmarket"? It depends on how you interpret it but it certainly has become a neighbourhood for the middle classes who aspire to have it all.  The parks, schools and shops (town centre) have all eventuated. In fact, Narellan Vale and Mt Annan is where they seem to be concentrated.

This took me by surprise when I first saw it because the concept seemed to be ahead of its time. During the 1960's Sutherland Shire Council was encouraging high rise development in Cronulla.

In fact, they even abolished height limits so as many people as possible could enjoy high rise living but also the views on offer. Everyone was entitled to a view (and why not?) Even the railways wanted people to get the most out of it, they actually proposed a high rise development to be built on top of Cronulla railway station. There were a number of other proposals floating around. Some were built; others were not.

For the developer, they would land a 99-year lease, commencing in 1972. Cronulla would also land a modern rail station, a rail station that would have needed a major refurbishment by now.

What if this had proceeded?

I love asking the "What If" question as a historian because I love to make a guess as to what I think could have happened based on that evidence.

Obviously, the art deco station building would no longer be there and today we would be lamenting its loss heavily. It is a great example of station architecture for that period in Sydney. As mentioned the station would have needed a major upgrade by now.

Eight storey towers would have been quite plausible though the council might have been prepared to consider even taller towers. The station itself is at the top of a ridge which drops down steeply towards Gunnamatta Bay so eight storeys at the top of the ridge would have been commanding. Many of Cronulla's high rises from that period are of that height though there were two towers of about 15 levels constructed.

As for higher density development in Cronulla, I think current perceptions towards restricting highrise development would have remained the same. What about higher densities in Cronulla? Three unit walk-up blocks of units that were built up during the 1960s and 1970s in streets like Laycock Avenue, Cronulla Street, and Nicholson Parade would still be here. They would still be there but I think Sutherland Council's current eight storey height limit would be tolerated around there. Tonkin Street might have some midrise unit blocks but the Sutherland Shire Local Environment Plan in its current form would have allowed it.

Some change would have occurred but not as drastic as some may think.

Property Advert of the Week: Avoca by Lend Lease (1968)

This week we focus on Lend Lease. In 1968 they were promoting the Avoca as one of their twelve model homes. The $7685 price for construction would equate to just under $87 000 today according to the RBA Inflation Calculator. 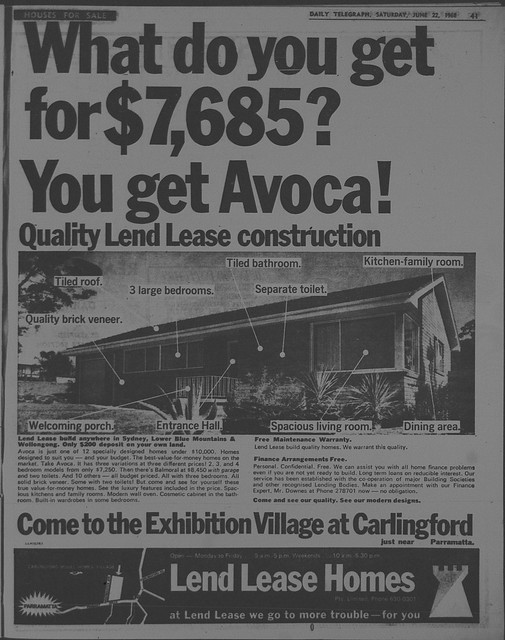