Our older readers might remember back in the 1970's when The Daily Telegraph had its own news ticker amongst the neon signs and street lights of Kings Cross. It was unveiled in 1972 on the podium of the Crest Hotel. 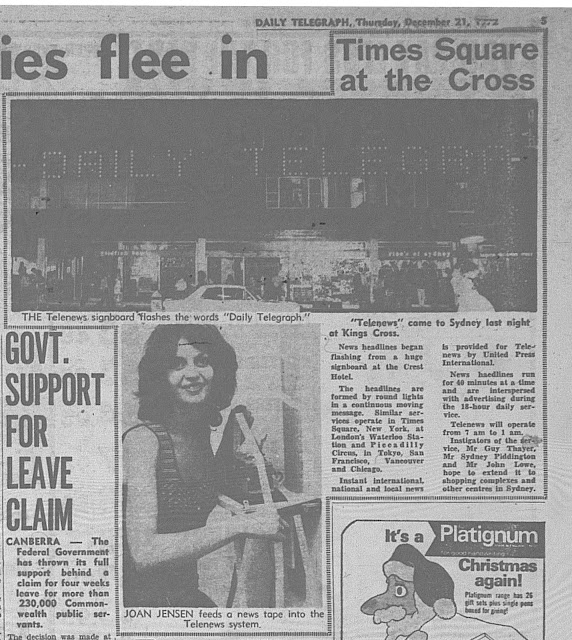 I don't know when it got pulled down at this stage. But Channel Seven in late 2004, unveiled their own "telenews" ticker around its Sydney News Centre at 52 Martin Place allowing Sydneysiders to once again get their news while on the move. The ABC has one at the rear of its studios at Ultimo. In a fast-paced world, getting the news quickly is as important as ever. 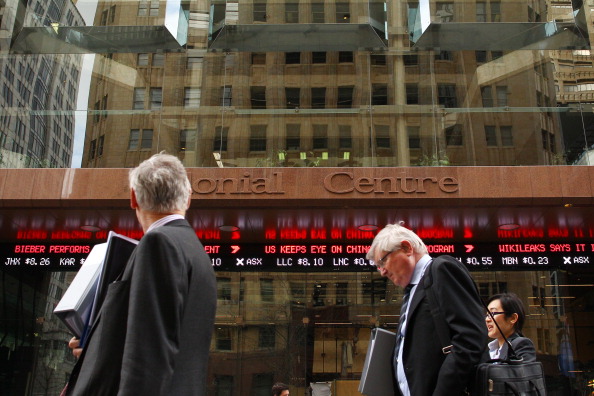 As for the Crest Hotel, there is a development application currently before Sydney City Council to convert the building into apartments.

In 1967, all you needed was a fifty pound ($100) deposit to own a quarter of an acre of land at St Ives. The blocks of land were priced from just under eighteen hundred pounds ($3600). According to the RBA Inflation Calculator, that would equate to just under $43 000 in today's money. 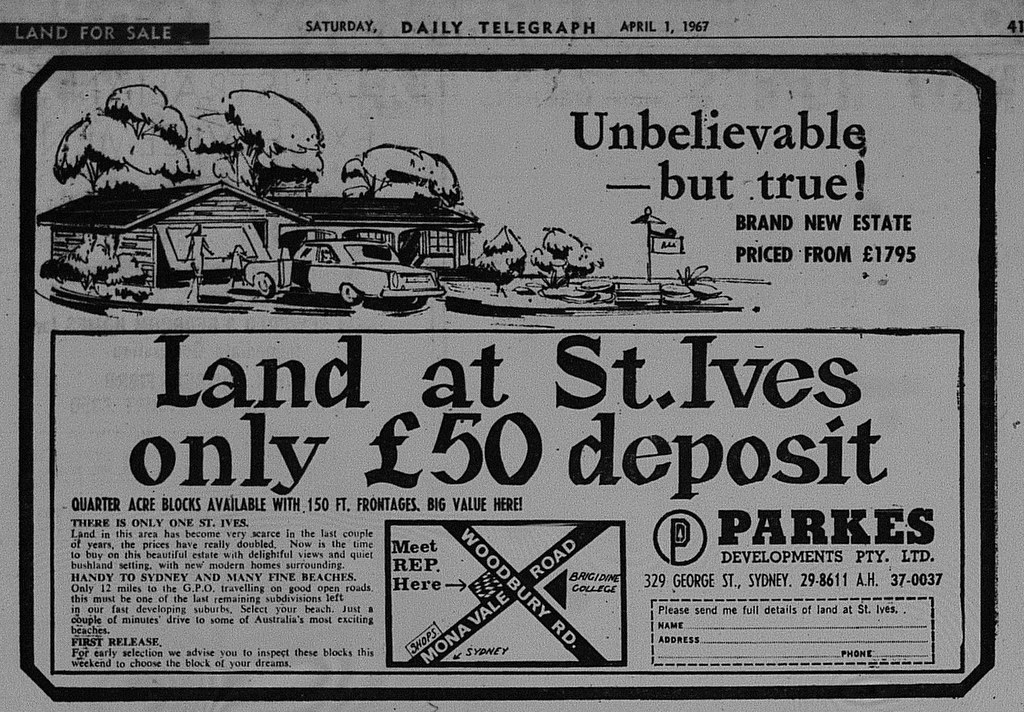 To mark ANZAC Day this week and the 100th anniversary since Australian troops landed on the shores of Gallipoli in Turkey.  I came across some material from The Daily Telegraph half a century ago when Sydney marked its 50th anniversary. 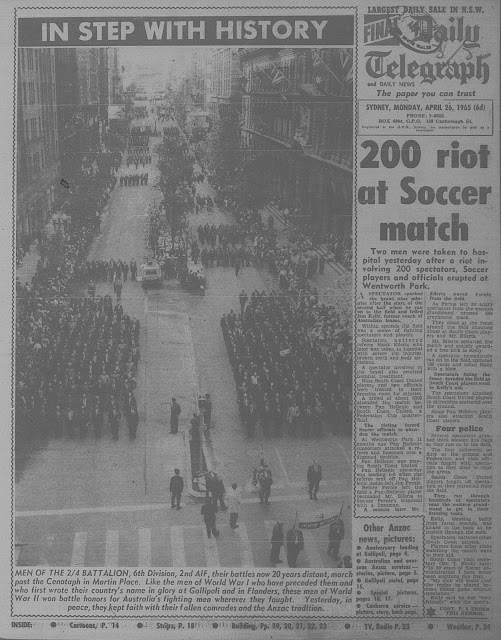 In 1965, Australia had military advisors present in Vietnam to assist the South Vietnam army in their war with the north. Australian servicemen were serving in Malaysian Borneo alongside the British and Malaysians in protecting population centres from Indonesian attacks. Just a few months earlier, a conscription lottery for national service had been introduced, where 20-year-old men were required to serve in the army if they were selected according to their birthday. This was done in order to provide a suitable defense force to battle the hostilities in Asia that had been triggered by the spread of Communism. 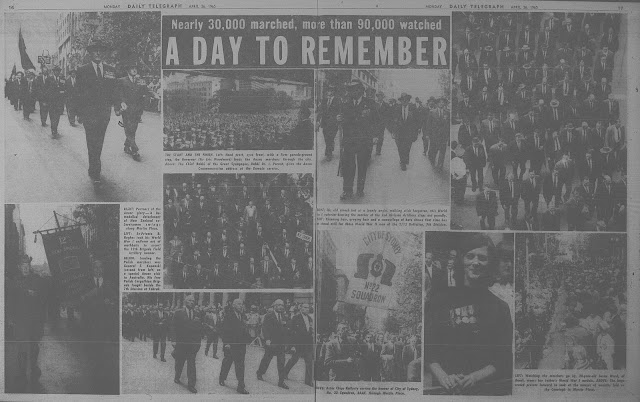 The timing of ANZAC Day this year has caused a fuss for some because it falls on a Saturday and people will not get a public holiday on the following Monday to make up for it. In 1965, it fell on a Sunday and it was led by the churches. For the churches, they were unimpressed by the decision by the RSL to allow marches during the morning because it would prevent people from attending regular Church services. In previous instances where ANZAC Day fell on a Sunday like in 1948 and 1954, commemoration services were moved to the afternoons to allow people to attend Church services in the morning.

For the 50th anniversary, there were the typical ceremonies that makeup ANZAC Day in Sydney including the dawn service and the march. It followed the same route as today, except they started at the Macquarie Street end of Martin Place, not at the intersection with Pitt Street where it starts today. The front page of the The Daily Telegraph from April 26 below shows the veterans marching past the Cenotaph. Four days later on April 29, Prime Minister Sir Robert Menzies announced that combat troops would be sent to Vietnam. The first wave of servicemen left at the end of May on the HMAS Sydney, arriving in Vietnam on June 10, 1965. Australia would be involved in the conflict until 1972. 50 000 served their nation with 508 killed.

In the years that were to follow, the servicemen from World War I and II had diminished in ranks and some had questioned the relevance of ANZAC Day.

Meanwhile, the opposition to Australia's involvement in the Vietnam War by Australian society led to public shaming of Vietnam Veterans, even though the majority were forced to fight even if it went against their beliefs.

However, in the 1980's there was a resurgence in the ANZAC Legend but also increasing appreciation of the efforts of servicemen in all conflicts.

In 1981, Peter Weir directed the feature film Gallipoli featuring the rising star Mel Gibson. The movie is about two runners from Western Australia who decide to fight in World War I and were sent to Gallipoli. Though the story was fictional, it was an attempt to show the conditions and experiences that the real fighters would have experienced at the time.

Meanwhile, Vietnam veterans fought for their recognition for their services. For instance, Redgum's "When I was Only 19" (1983) bought home to Australian's the challenges that the young servicemen were forced to endure not just during their service in Vietnam, but in the years that followed including the physical and psychological traumas that came from fighting in war.

Normie Rowe, who was forced to stop his music career in 1967 to serve in Vietnam pushed for a welcome home parade which took place in Sydney in 1987. I do plan at some point to look at that parade itself. 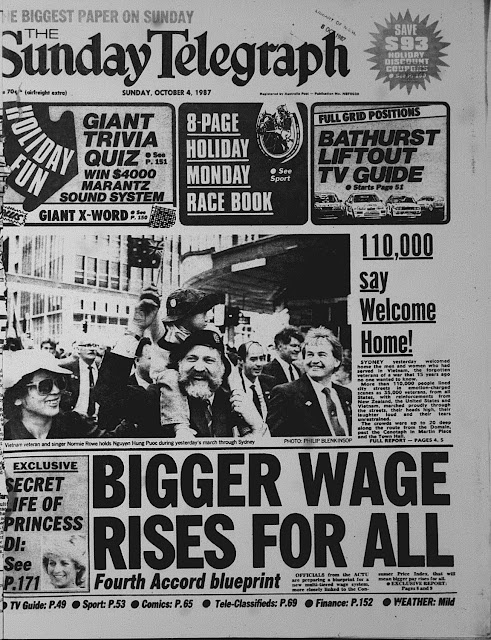 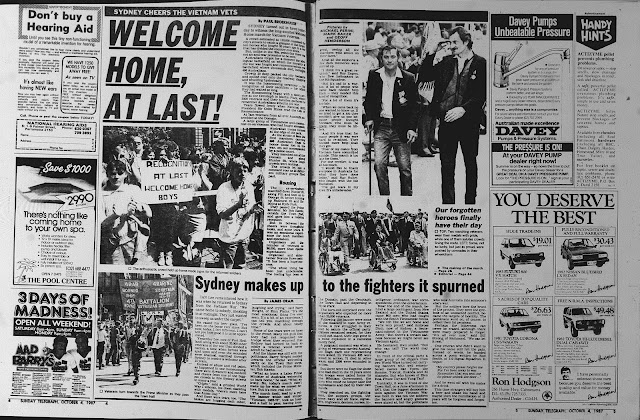 As we headed into the 1990's and the first decades of the 21st century, crowds attending ANZAC Day events have surged to record attendances. In recent years as many as 25 000 gather for the Dawn Service at the Cenotaph in Martin Place. In fact, the crowds have spilled several blocks to the east. Crowds estimated at 100 000 gather along the parade route to watch 20 000 veterans and their descendant's march.

I wonder what 2015 will bring. Many events are planned in addition to the traditional ceremonies. I look forward to hopefully covering it at some point in the future.
Posted by Unknown at 00:00 No comments:

Our property advert of the week is again from 1967, but this time we head to the south west of Sydney. This advertisement was for the Melwood Heights Estate in Mt Pritchard that was built by George Hudson Homes. All homes were designed by an architect.

You'll notice that the price is listed in pounds as they were permitted for two years following 1966 to advertise the prices of goods and services in pounds. The deposit would have been $1190 given that two pounds equaled one dollar. According to the RBA inflation calculator, that is the equivalent of approximately $14 150 in today's money. 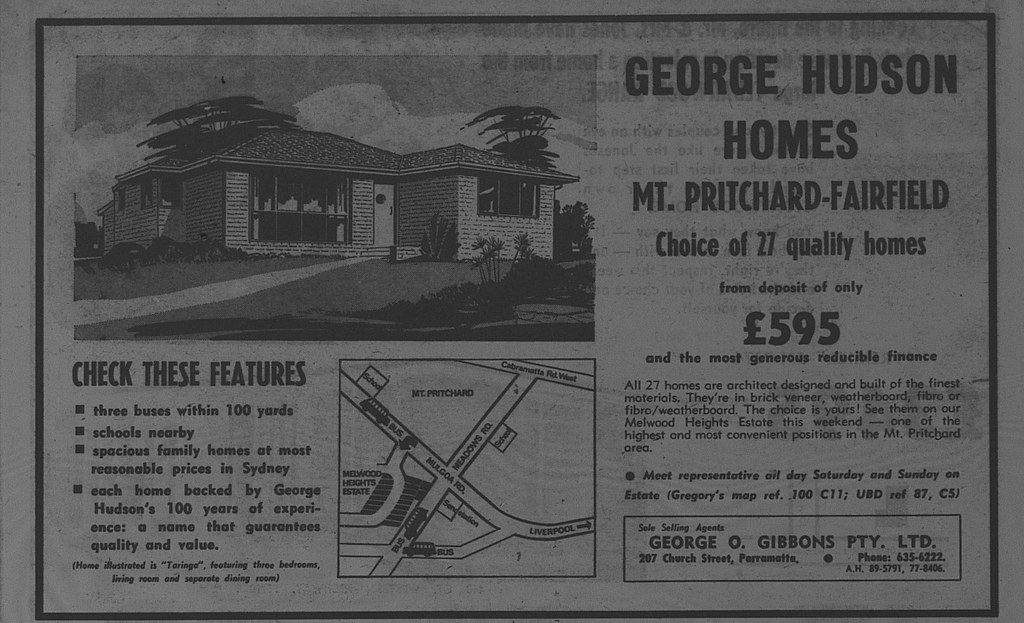 Filling the city's holes in the Ground: Victoria Towers (1996)

From time to time, I'm going to look at the sites in central Sydney that were abandoned during the recession of 1990-91 when the property market in Sydney collapsed. This led to the cancellation of a number of developments. It would take some sites up to fifteen years to be developed.

One of those holes in the ground in the early 1990's was the site of the Sydney Catholic Club at 199 Castlereagh Street in the city. The original Catholic Club building had been demolished in 1989. 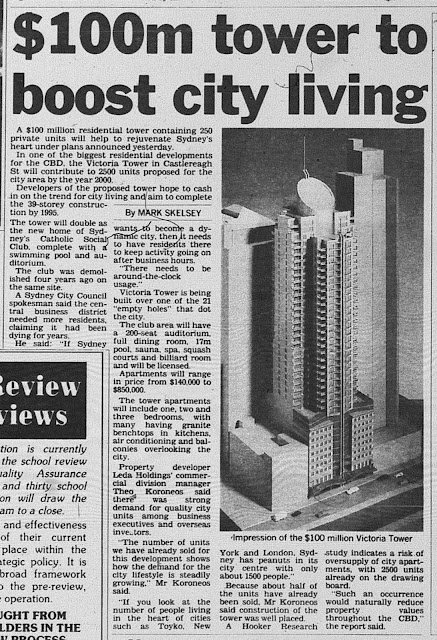 In September 1993, property developer Leda Holdings was given approval by Sydney City Council to construct a 39 level apartment tower, rising to 120 metres above street level. The building would contain 252 apartments plus a rebuilt Sydney Catholic Club (now known as the Castlereagh Club). It was one of the first high rise apartment towers approved in the 1990's for central Sydney and would set a precedent for future high rise residential tower development. Residents also had access to the latest trends in residential facilities for its time including a gym, pool and 24-hour concierge service.

As the above article from The Daily Telegraph mentions from November 1993, Leda wanted to "cash in" on the trend towards high rise living, particularly as Sydney's CBD lacked apartments despite high demand from business executives and overseas investors. At the time, only 6000 people were reported to be residing in central Sydney. Meanwhile, Sydney City Council wanted to entice people to live in the city to help it become more lively and dynamic but, also to fill in those empty holes in the ground. It was a win-win for all. Apartments went on sale in early 1994 with construction underway not so long afterwards. The tower was completed in 1996. Below is an advertisement advertising apartments for sale in mid-1994. Apartments were on sale from $219 000. 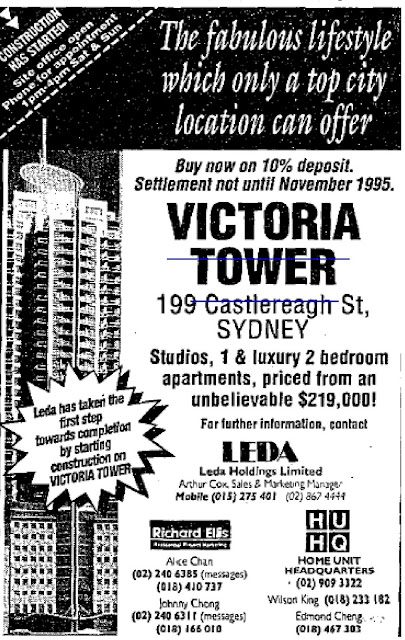 Last week, yours truly went into the city and managed to take two photos of the building. 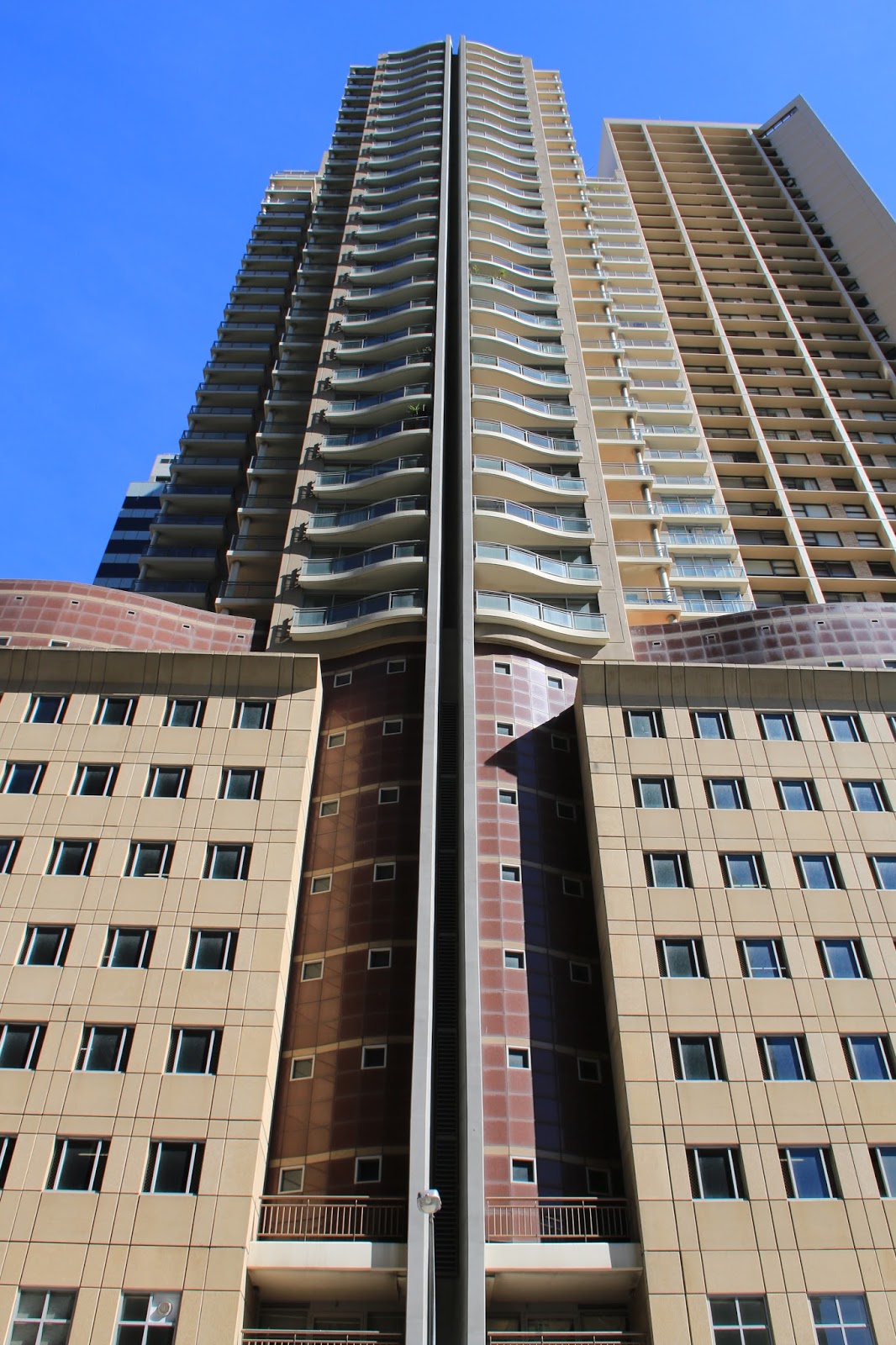 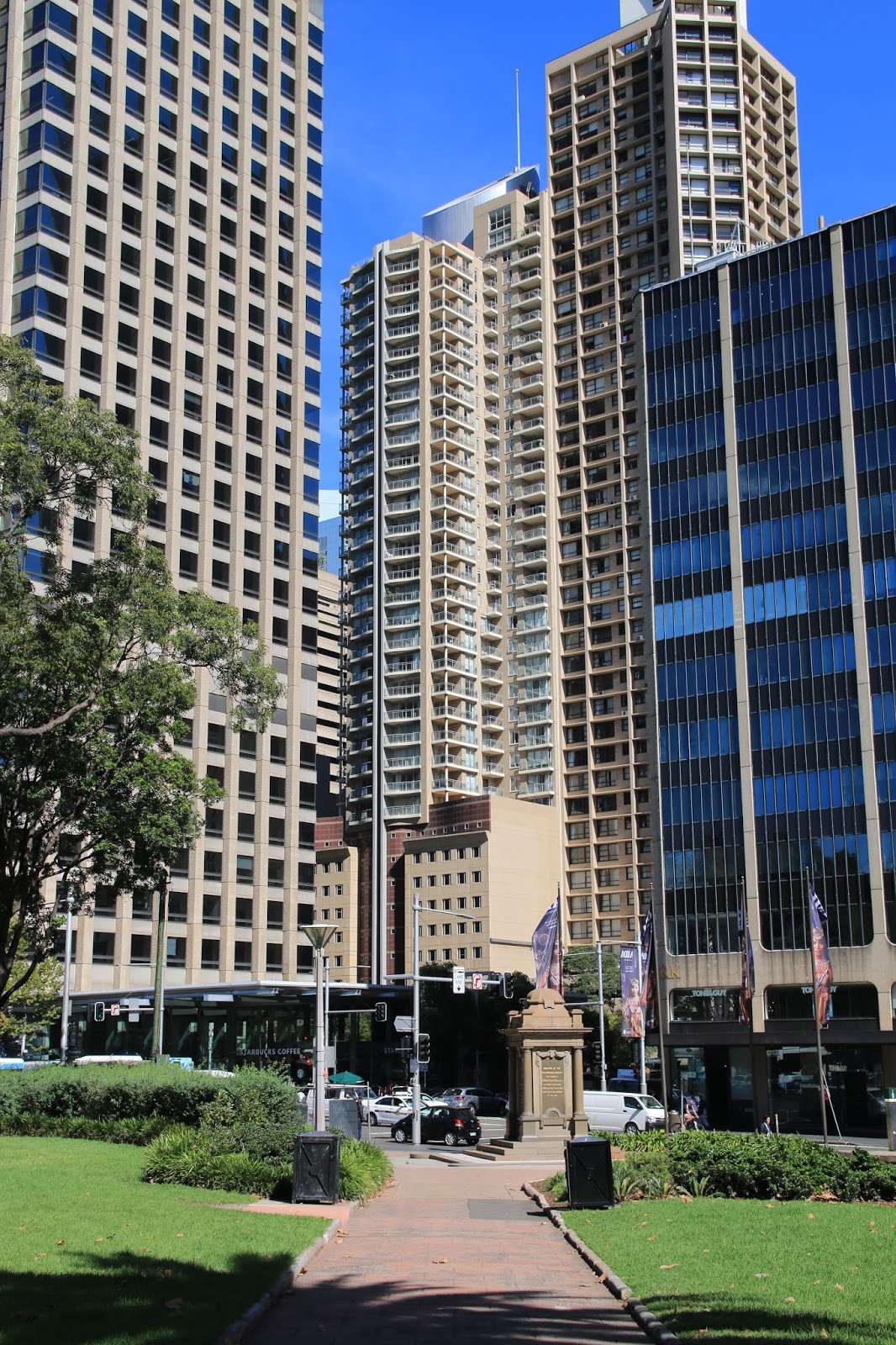 Property Advert of the Week: House and Land Packages at West Pennant Hills (1967)

This weeks property advertisement takes us to West Pennant Hills, where you could buy a house and land package for as 7700 pounds ($15 400) in Lisle Circuit in 1967. That was the equivalent of $179 000 in today's money according to the RBA Inflation Calculator.

I decided to see if I could find the house featured in the advertisement and it appears that it is still standing according to Google Earth. It is located at 4 Lisle Circuit. The front fence is gone but a few trees and shrubs have grown in its place.

The NSW Election as we know was held recently and one face that you might have recognised during election night coverage and at the Liberal Party Election Launch was former Premier John Fahey (1992-1995).

One topic of regular discussion on Circular Quay during the 1990s was what to do with the Cahill Expressway and to redevelop the precinct. Then Prime Minister Paul Keating wanted it to be pulled down as the recently opened Sydney Harbour Tunnel provided the "first and only opportunity" for it to be removed. In July 1994, he attacked the State Government led by John Fahey for not embracing the opportunity. For the state government, the $450 million cost of demolishing the roadway plus redirecting cars and trains was too cost prohibitive. The money was better off being spent on transport infrastructure across New South Wales.

Keating accused them of lacking vision while branding the roadway an "eyesore". He went further and also said that the state government was unfit to showcase the city for the 2000 Olympic games. Federal government money was offered to make it happen. Still, the answer was "no". Fahey told The Daily Telegraph in its edition of July 14, 1994, that he had made requests for Federal assistance but was ignored.

Fahey wrote exclusively for The Sunday Telegraph the following week (July 17) where he revealed his vision for Circular Quay which included:

The cost of works was projected at $40 million. A design competition would also be held.

While he felt that the Cahill Expressway needed to be pulled down in the long term, it needed to stay for the time being citing demolition costs and redirecting cars and trains as mentioned.  Instead, they proposed an upgrade of Circular Quay. One feature was to include an archway as part of improving the concourse area for Circular Quay railway station and creating an open space linking Customs House with the Quay. No outdoor cafes would be in this area. 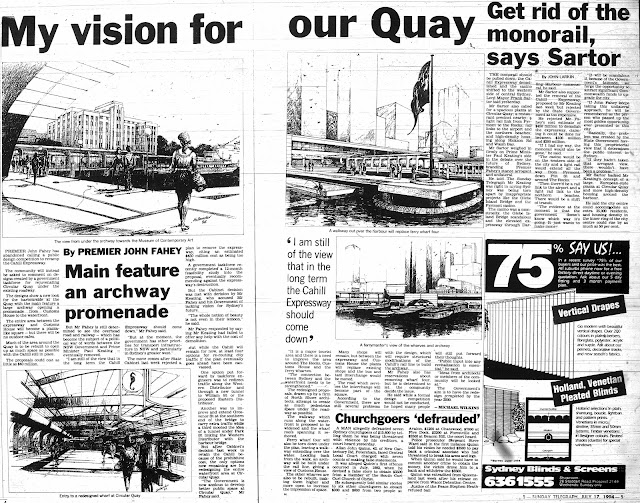 While the archway never became a reality, our wharves did get their makeover, Wharf 4 is still with us and a public square was built outside Customs House. Footpaths along Alfred Street were also enlarged. It was all completed by the Olympic Games in 2000. Those in Sydney at the time would remember it was one of the official CBD live sites broadcasting Olympic events.

Still, in 2015, there are calls to pull the Cahill Expressway down, but nowhere near the attention it did receive two decades before.
Posted by Fabian Amuso at 00:00 No comments:

This weeks property advertisement is from 1963. We head to Bass Hill where a 65 pound deposit would seal yourself a block of land in the area, which I believe is in and around Denman Road at what is currently  Georges Hall. The advertisement mentions of a proposed shopping centre which is now Bass Hill Plaza (opened 1981) and a hotel. 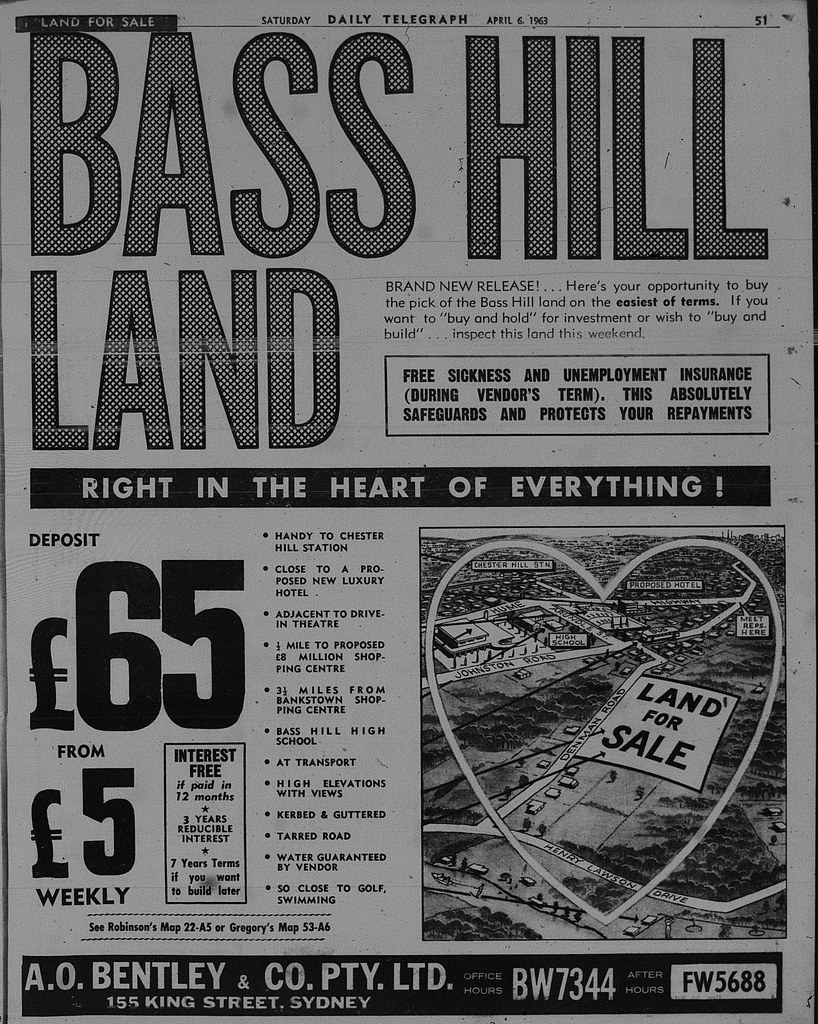