Continuing on in our series of the evolution of World Square, we will look at the completion of the first major building at the World Square site - Hordern Towers which would be completed in 1998.

Last week, I covered the years that the site was vacant and merely a hole in the ground. The challenge was to restart work in some capacity. In 1994, a Malaysian consortium had landed the northeastern section of the site at the corner of Pitt and Liverpool Streets. Under the 1985 scheme, the tower slated for that site was to be for a hotel.

That was set to become a reality:

By 1997, work was well and truly underway impressing then Lord Mayor Frank Sartor. 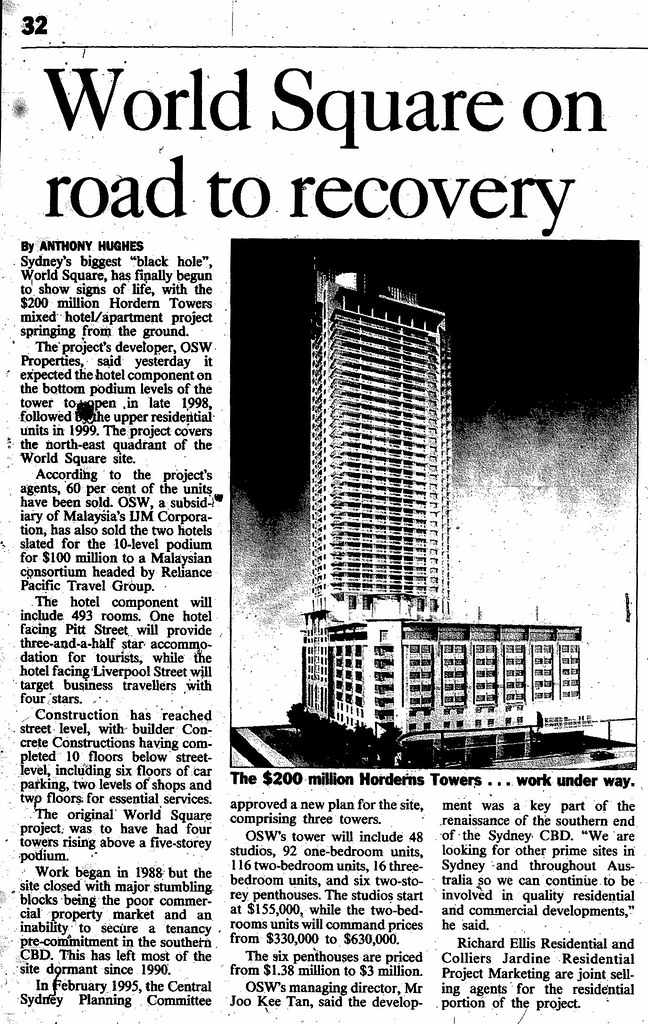 In 1999, Hordern Towers was now ready for business. 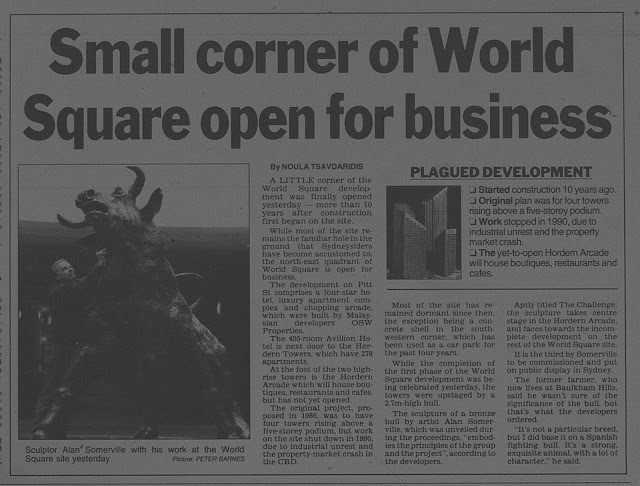 Hordern Towers was designed by Davenport Campbell & Partners rising to a height of 156 metres. There are 48 floors with  278 apartments spread over 31 levels. A hotel (Rydges World Square) occupies the remaining levels. The retail component would be integrated into the World Square shopping complex as the remaining stages were built.

I've included at the bottom several photos that I have taken over the years of the tower. 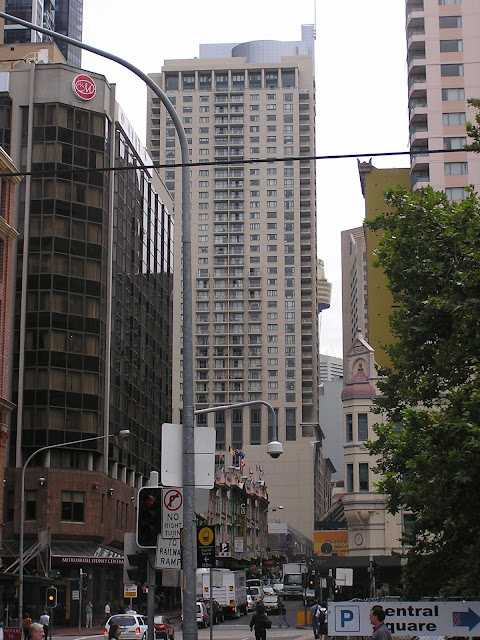 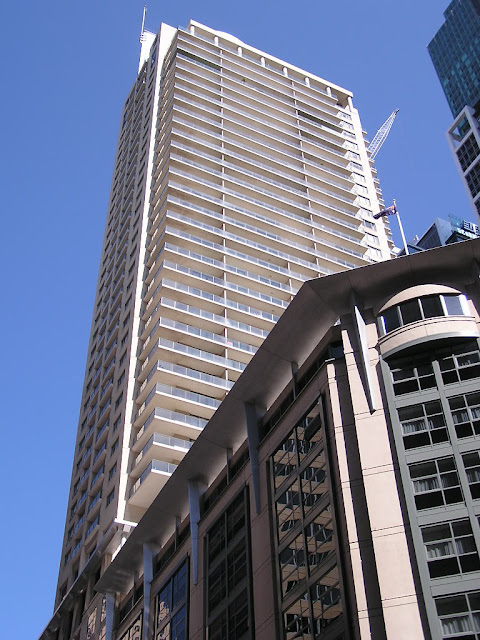 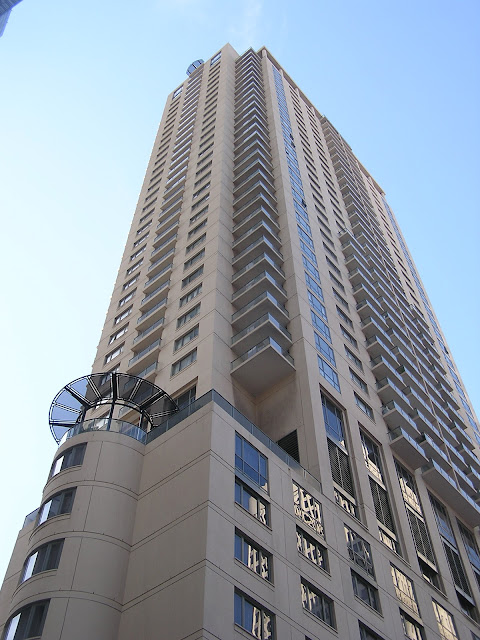 In 1996, AVJennings were promoting their Discovery Park Home Display Village at Kellyville.

No exact address is listed but by going by maps, it was located at the intersection of what is now Samantha Riley Drive & Windsor Road, Kellyville. This might need verification, so let me know if the details are incorrect.
Posted by Fabian Amuso at 00:00 No comments:

Last week, I focused on the approval and early stages of construction of the failed World Square development in central Sydney before industrial disputes and financial problems forced the collapse of the project in 1990.

World Square would remain mostly idle for a decade, though by the end of the 1990's the first steps towards the evolution of what we see there today.

The collapse of the World Square project happened to coincide with a property crash in Sydney along with the 1990-91 recession, which stifled demand for development in central Sydney. Over 20 sites in central Sydney would be affected by the recession with projects simply abandoned despite excavation works taking place.

Ipoh felt inclined to let the recession "do its work" and believed it could still turn a profit. Still, nothing happened. The site was now inviting wildlife.

Even building just the podium would do? Could Sydney retailing have been transformed forever? 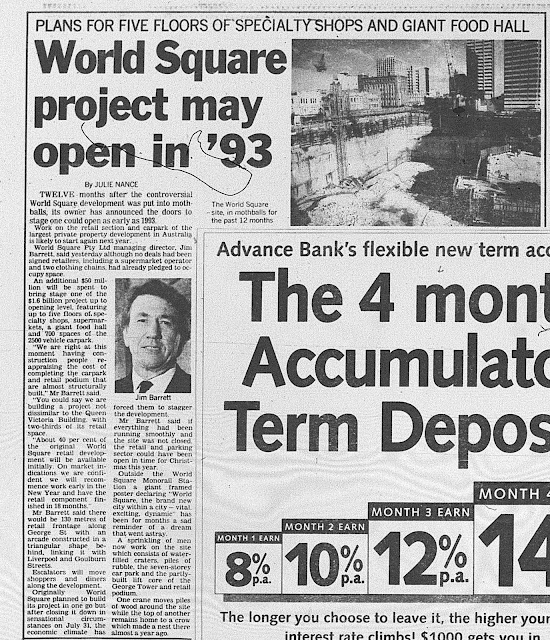 
In 1993, Sydney was successful in its bid to host the 2000 Olympic Games and the push was on to have the site developed for the games.

Just a year later, there was a proposal to build a major carpark.

By 1995, work had begun on the carpark to be built by Grocon containing 600 spaces. This would be the first step in bringing the site to life. 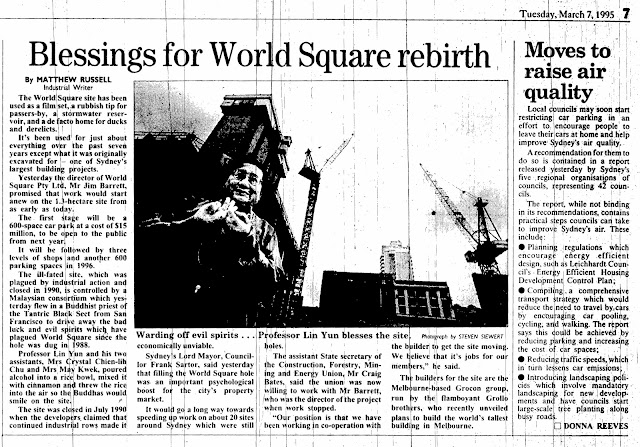 A year later, a new proposal had come to life for two towers. This does not include Hordern Towers which was being developed separately. The corner of Goulburn and Pitt Street would no longer have a tower, but a smaller building comprising of hotel and serviced apartments. 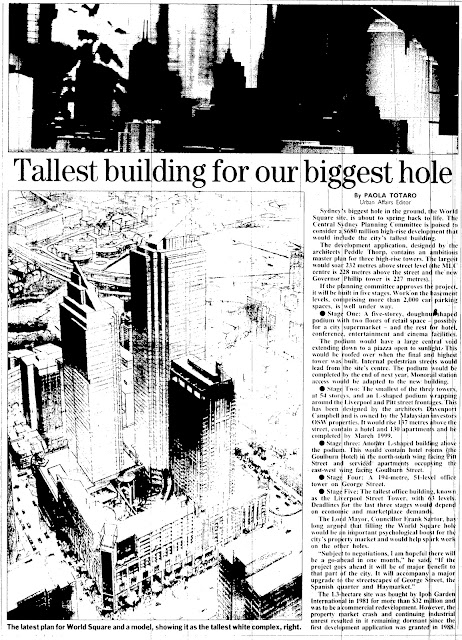 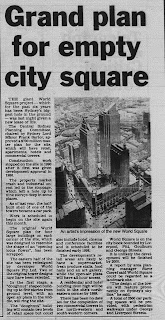 Interestingly, this proposal also came up in 1996, but just to develop 680 George Street. 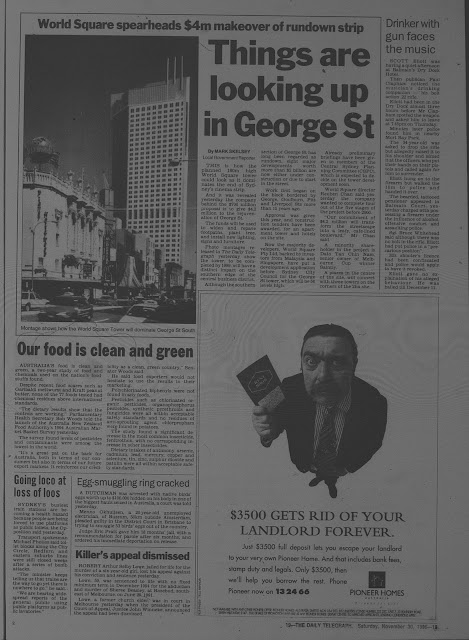 Next week, I'll look at Hordern Towers, which would become the first major development on the site to be completed.
Posted by Fabian Amuso at 00:00 No comments:

Property Advert of the Week: AVJennings House and Land Package (1987) 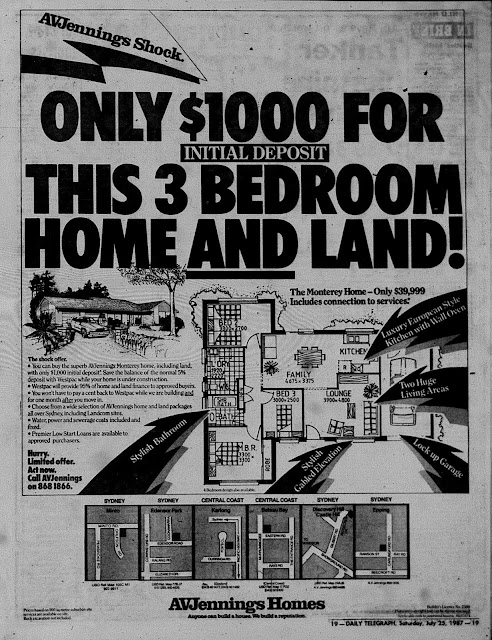 Continuing on in our series in the evolution of World Square, we move forward to 1985, where a fourth tower is introduced into the World Square development. The idea of introducing a fourth tower was to make the towers form a lotus flower. 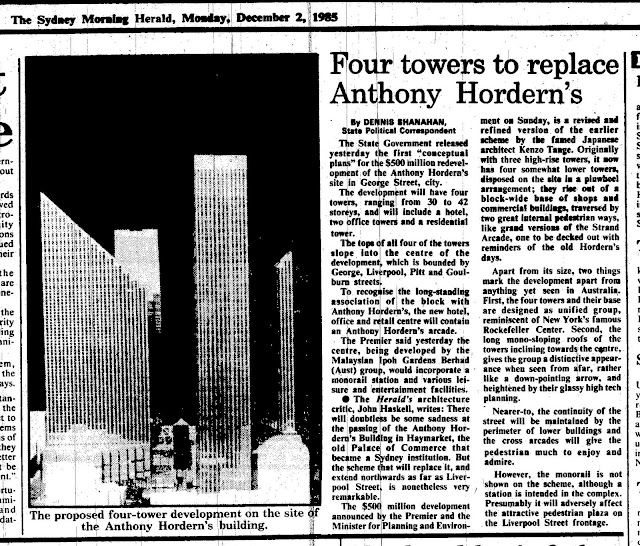 In 1986, the Anthony Horderns Building was demolished even though the $1 billion project had yet to be formally approved. In the same year, the NSW Government assumed planning control of the site. Planning and Environment Minister (and future Premier) Bob Carr was handed power to approve the development, which he did in April 1987. 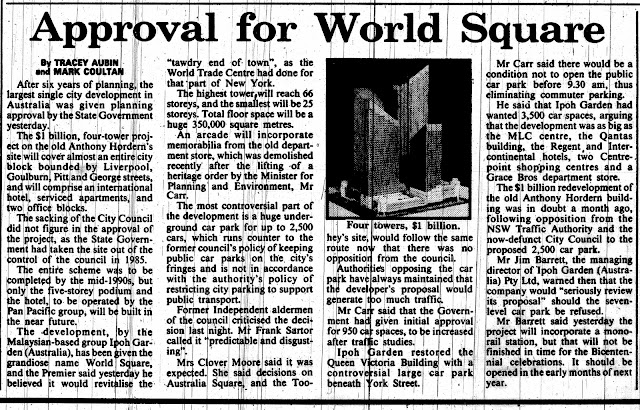 By the end of the decade and the site had been dug to 30 metres below street level. On the corner of George and Goulburn Streets, one of the office towers (George Tower) was well under construction, with work beginning in December 1988. This tower would become 680 George Street. However disputes with unions and workers would fuel the collapse of the project in mid-1990 and for over a decade, we would see inactivity at the site.

Next week we will look at the idle years at World Square and Hordern Towers. Then we will move onto the gradual formation of World Square as we see it today.

This week, I share with you a 1987 newspaper advertisement for model homes that were being provided by the Hooker Housing Group. 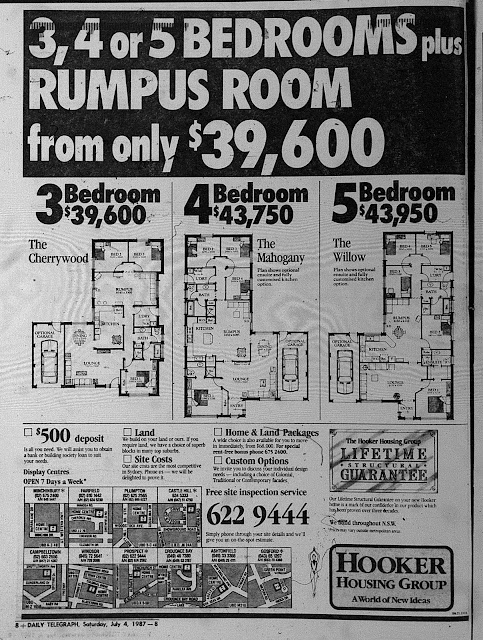 After last week's post on the original plans for the redevelopment of World Square, I've decided to focus this week on the next major proposal which dates to 1983.

In 1981, Ipoh Gardens Berhad ended up with the site and had planned for a multi-tower development just on the site of Anthony Horderns, including retaining some of its famous facade. There would also be a park in the middle.

Just two years, later the proposal was revised. Unlike the scheme proposed in 1981, it would now encompass the entire city block bounded by George, Goulburn, Pitt and Liverpool Streets.

Many will associate Kenzo Tange's involvement with the 1985 scheme, which is highly talked about because of the positioning of towers in the shape of the Lotus flower. You'll find out about that next week.

The scheme according to The Sydney Morning Herald on May 17, 1983, comprised of three towers:

The towers would rise over a four-level podium. 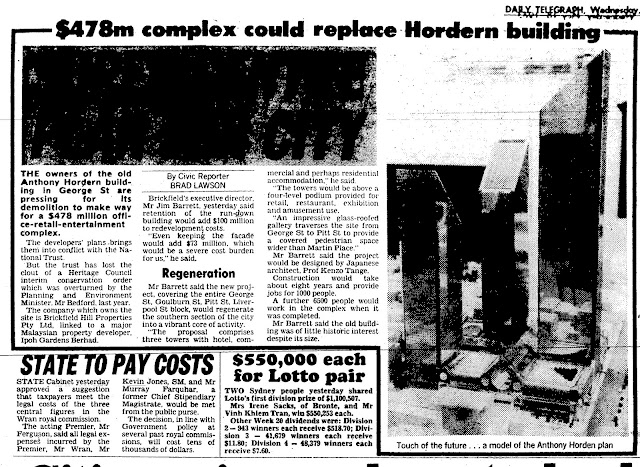 Heritage experts were calling at least for the facade of Anthony Horderns to remain but it was argued that it would be too expensive to undertake and that the facade lacked craftsmanship.

Construction was projected to take eight years, though The Sydney Morning Herald reported that it could be completed in six years.

Property Advert of the Week: The Mark, Broadway (1998)

Last week, we were on the eastern fringes of the city, now we head to the western fringe where apartments were on sale in The Mark complex at Broadway in 1998. 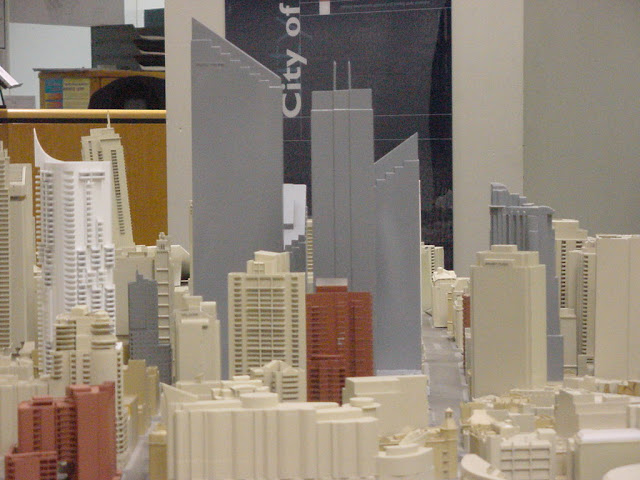 Photo by the Author.

But the first World Square Scheme dates back to 1973, when Stocks and Holdings proposed a $150 million scheme for the site of Anthony Horderns and surrounding buildings on the block bounded by George, Liverpool, Pitt and Castlereagh Streets. 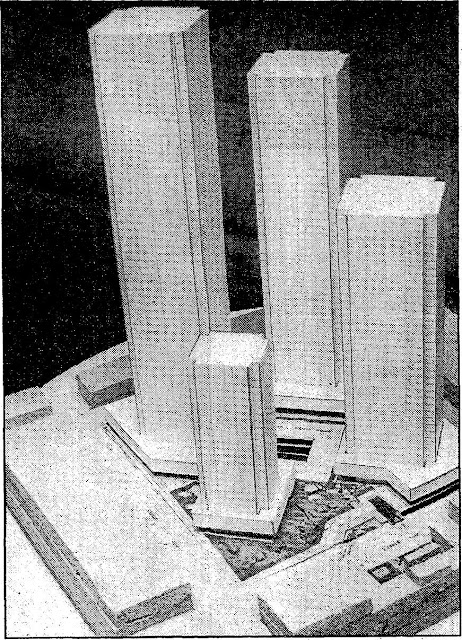 At the time, it was the biggest ever proposal for a single block in Sydney. The podium would have included a retail complex, dining spaces along with theatres and clubs along with a possible hotel. The credit crisis was to follow and it would claim Stocks and Holdings. ﻿