Last week, we explored the introduction of Saturday afternoon trading in NSW in 1984. As the decade rolled on, pressure was being applied by some retailers to allow shops to trade on a Sunday. A number of major retailers had been flouting a loop hole in trading laws to allow them to trade.

This was led by Electrical and Whitegoods chains like Harvey Norman and Norman Ross. the argument was simple - Sunday provided time for people to buy goods that they needed for their homes.

Meanwhile, illegal Sunday trading continued as The Sydney Morning Herald highlighted in 1985. Hardware chains were trading on Sundays in order to compete with smaller operators, who were allowed under legislation to trade. 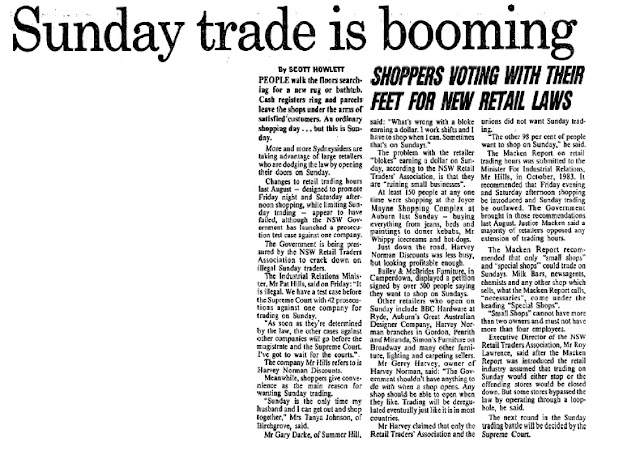 By late 1987, Premier Barrie Unsworth announced that he would explore allowing Sunday trading in parts of Sydney. The Greiner Government was elected the following year and took it a step further. It deregulated retail trading hours from Monday to Saturday. Furniture, Electrical and Hardware Stores were permitted to trade from 10am to 4pm on Sundays. 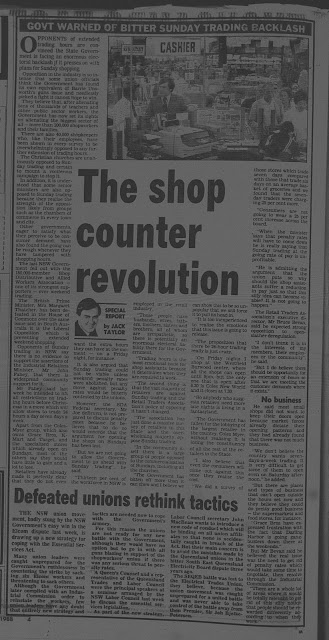 Other retailers could exemptions from Sunday trading laws. In 1988, Grace Bros was allowed to open their CBD store on a Sunday. It had become the first department store in Australia to trade on a Sunday. 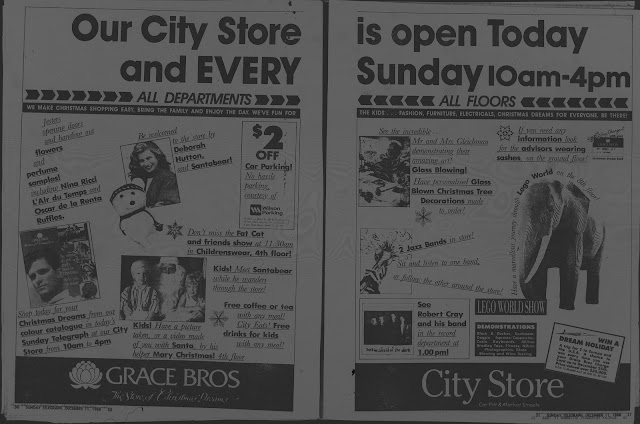 However they were unsuccessful in gaining approval for another six of their stores to open.


The Sydney Morning Herald did foresee that Sunday trading for all retailers was inevitable as shown in this editorial from late 1988.

In December 1989, retailers were given permission to trade on the two Sundays leading up to Christmas, after successfully persuading the NSW Government to change its decision on keeping shops closed. I posted them in a Christmas feature several years back if you wish to browse through them. The public voted with their feet (and wallets).

During 1992, Sunday Trading was introduced throughout Sydney. It began with major shopping centres or retail precincts like the Sydney CBD, Parramatta, and Chatswood and expanded through regions across the metropolitan area. By the end of the year, Sunday trading was available in all suburbs. The argument by big retailers was that it was shoppers, not the law that should determine when a shop should be open. The State Government also passed legislation that finally led to deregulation of standard retail hours.

For your interest, I have also included another editorial relating to Sunday trading as The Sydney Morning Herald saw it in 1992.

When you look at Sunday trading 25 years later, shoppers have voted with their feet. How hard is it to find a place to park your car on a Sunday if you are at a major shopping centre? There are some that would prefer that the shops still stay close on a Sunday on either religious or social grounds i.e. give time for people to be with loved ones, but its each of us that has the choice.

Sunday Trading was generally between 10am and 4pm, though it has now been extended to 5pm. Supermarkets and other major retailers initially had to stick to those hours, but gradually were relaxed.

Here is a treat for those in southern Sydney this week - An old advertisement for the first tower in the Plaza Apartments in Rockdale in 1997. For those of you not familiar with southern Sydney, the Plaza Apartment towers are located directly above Rockdale Plaza. It is actually one of the first shopping centres in Sydney where apartment blocks were built directly above the complex. 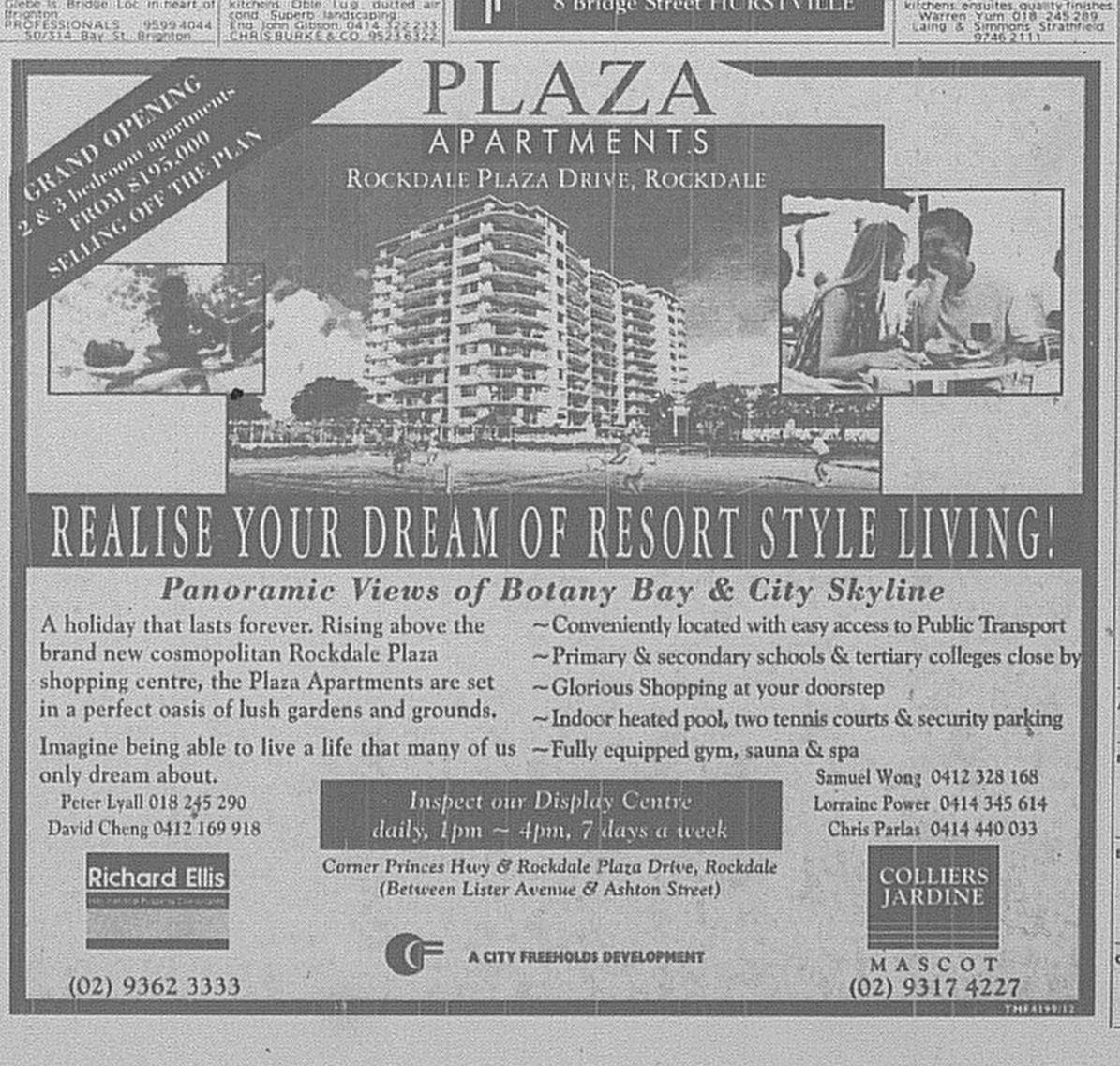 Older readers would recall well the days when shops were required to shut at noon on a Saturday and in shops and shopping centres across the city, the battle was on to get the shopping done in the morning.

I would love those readers to share their stories of those battles.

By the 1980s, retailers had found loopholes in trading law that had allowed them to trade seven days a week provided that they were a "small" business. However, if a major retailer sold identical goods on a Sunday, they could be fined. Shoppers wanted more time to shop as well.

Electrical and furniture stores like Harvey Norman, Joyce Mayne, and Norman Ross were trading on Saturday afternoons and Sundays, yet were not subject to prosecution under state law.  If Grace Bros, Waltons or David Jones opened during those hours, they would be prosecuted.

This was used by the unions to oppose further extensions to trading hours.

The winners from extended trading hours were:


The losers were:
The Sydney Morning Herald wrote a feature following the first weekend of Saturday afternoon trading in August 1984, and for small businesses, it wasn't a good day. Shoppers seemed happy though. 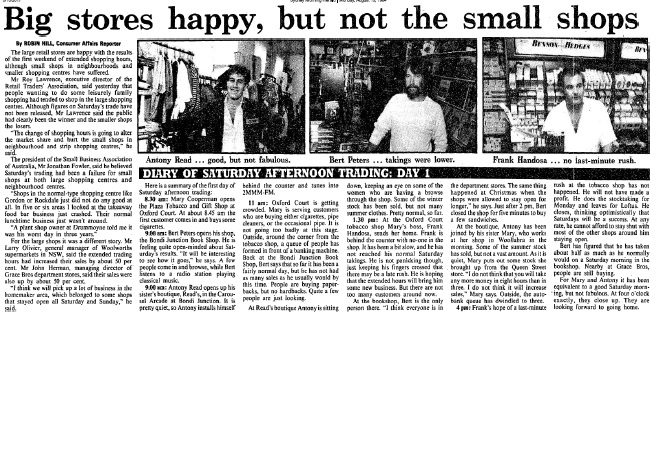 However, one exception was David Jones, who decided to introduce Saturday afternoon trading from the following Saturday (August 18).

With retailers allowed to trade all day Saturday, the push would soon be on for trading on Sundays.

This week, I share an advertisement for blocks of land in Tulong Place, Gymea, dating back to 1972. 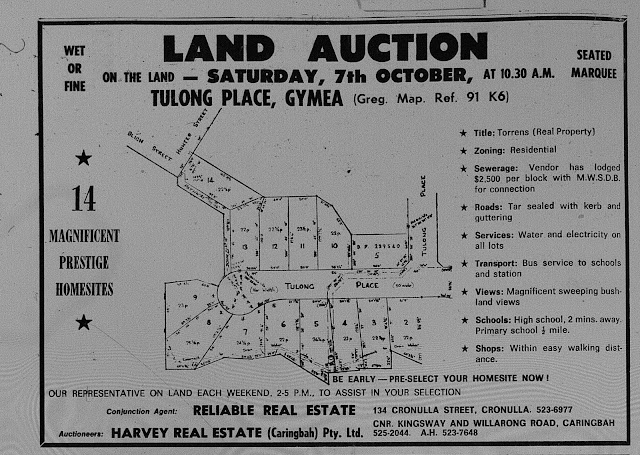 In 1997, those in the booming North West suburbs now had a motorway that would make travel much easier, but yet they were reluctant to use it despite the reductions in travel time that it promised. 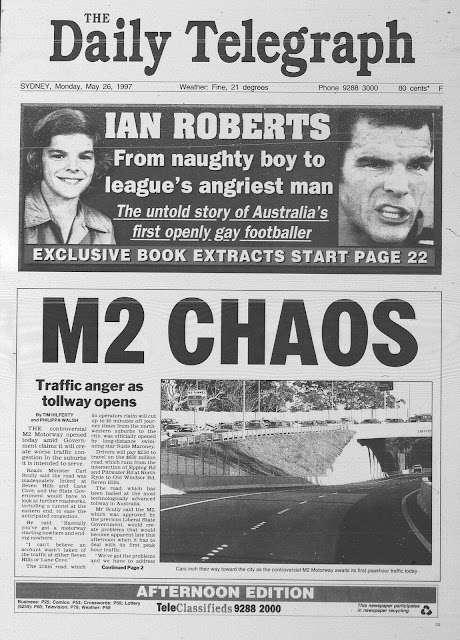 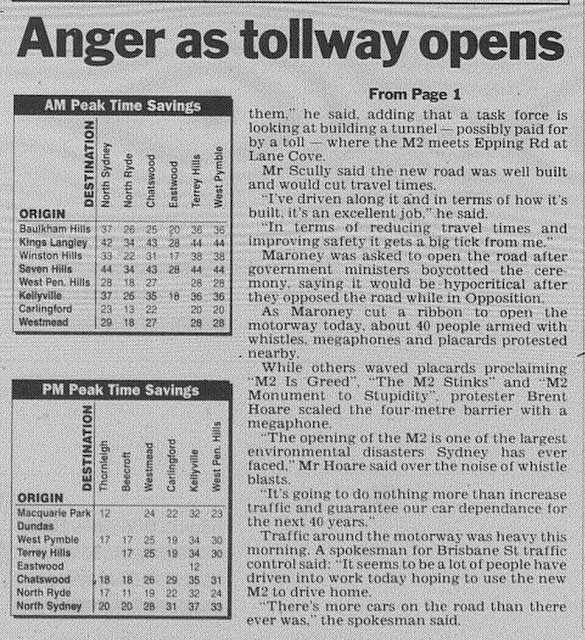 And then there were those who opposed it because it involved the loss of trees and vegetation. They were vocal from the planning stages and even on opening day wanted to spoil the celebrations. While for others, it was the fact one had to pay for the toll ($2.50). 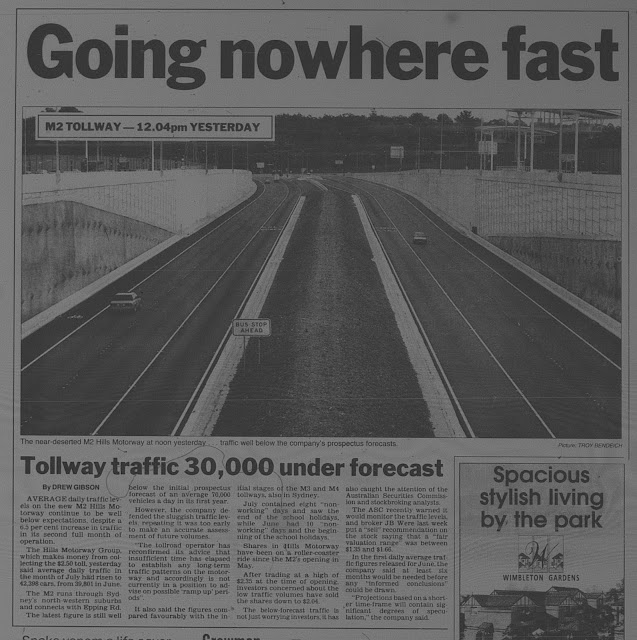 Eventually, the motorway did fill up with traffic and would form a piece of the Sydney Orbital network. Early in 2006, the M7 allowed drivers on the M2 a direct link through western Sydney down to the M5 Motorway and Hume Highway. In 2007, the Lane Cove Tunnel connected the M2 to the Gore Hill and Warringah Freeways.

During 2011 and 2013, an additional lane was added in each direction with improvements to on and off ramps.

Currently, the NorthConnex Project will connect the M2 Motorway to the M1 Motorway. This will be completed in 2019. Drivers will no longer need to use Pennant Hills Road or the Pacific Highway if driving in or out of Sydney.
Posted by Fabian Amuso at 00:00 No comments: 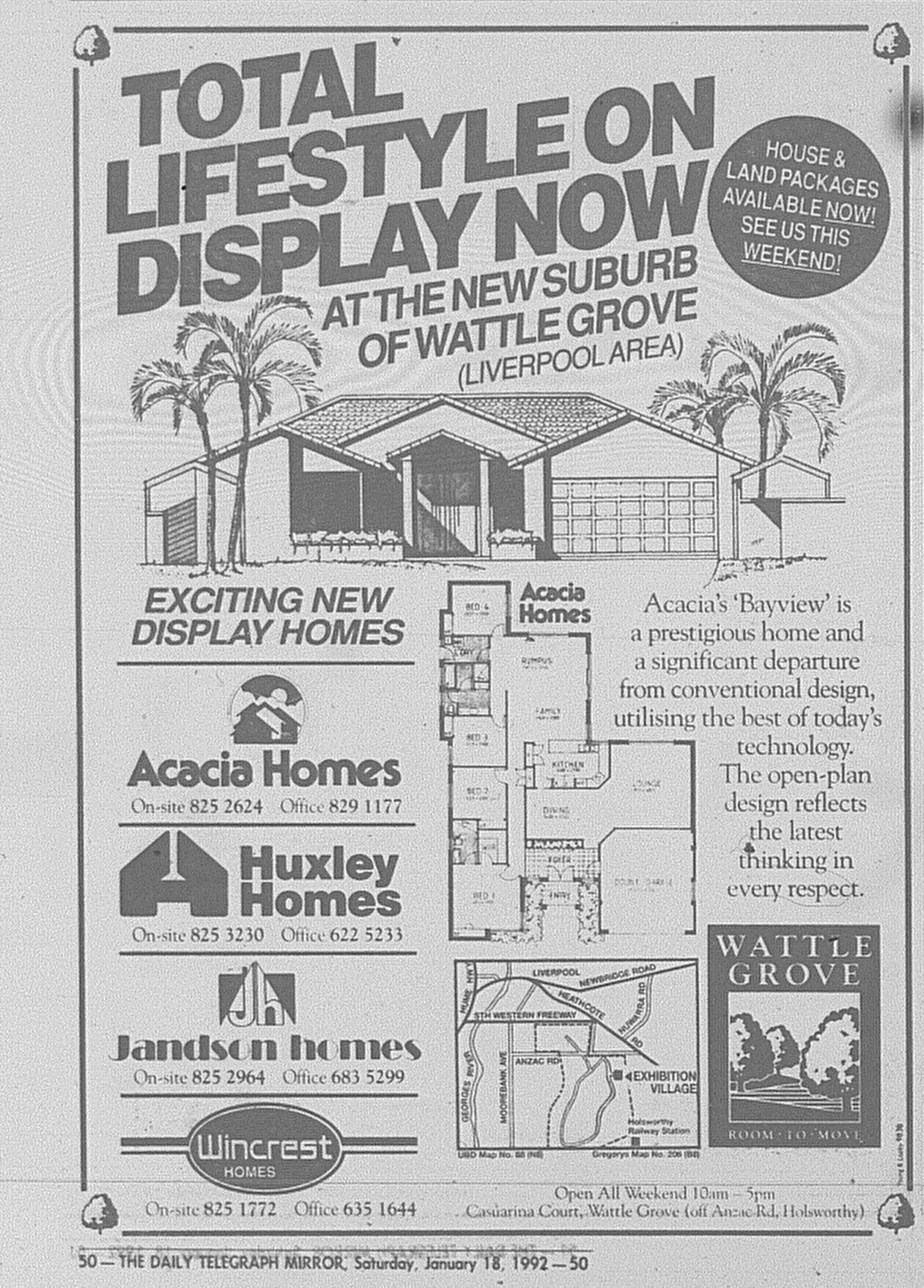 In 1990, the Greiner Government introduced the Jetcat ferries into operation on Sydney Harbour. This stemmed from the decision of NSW Transport Minister Bruce Baird in 1988 to replace the aging
hydrofoils.

The Jetcats promised a modern and more reliable service for Ferry Commuters. For the government, the costs of servicing the Jetcats would be lower. In addition, there was the promise of more comfort for commuters. There were plans to eventually expand the service to Gladesville but also operate as far as Port Kembla and Newcastle. 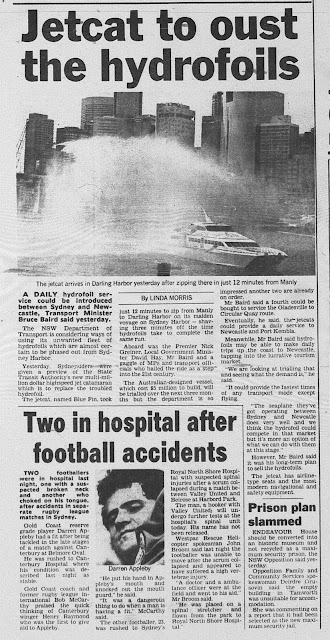 The first Jetcat to enter service was The Blue Fin. It ended up with its name after the public was asked to name the new ferry. 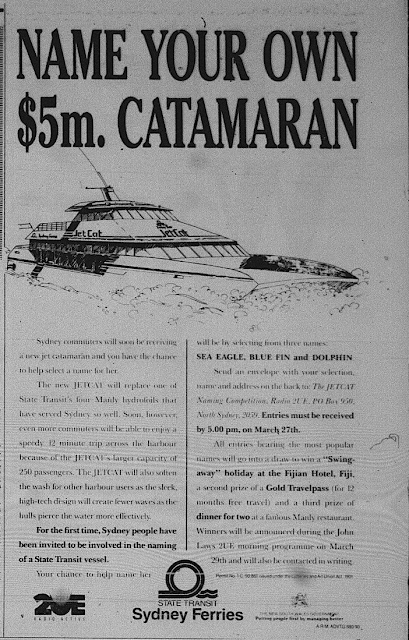 The Blue Fin commenced operation on July 16, 1990, after three months of trials. Below is a preview article from The Daily Telegraph. 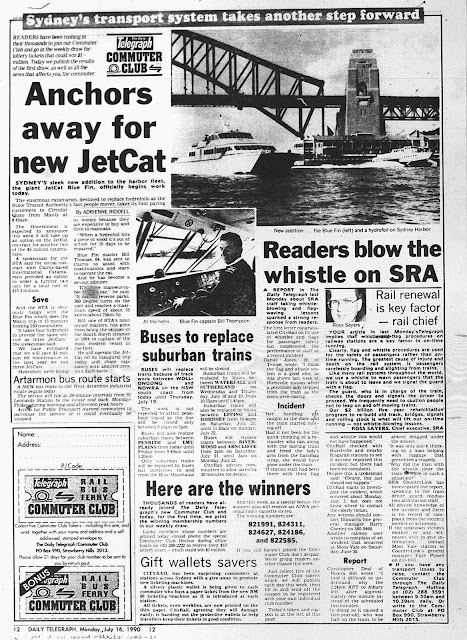 The hydrofoils after 26 years of service ran their last service in March 1991 after another two Jetcats - Sir David Martin and Sea Eagle were bought into service. During their first decade of service, The Jetcats were actively used. In fact, they were seen as a fifth ferry on the Manly run, replacing the regular ferries late at night and early in the morning. It was argued that with fewer crew required (and commuter demand), operating late night services would keep costs of operating the broader Manly Ferry service down. If existing ferries broke down, the Jetcat fleet would act as a substitute (as a trio), like in 2004 when two Manly Ferries - Collaroy and Queenscliff were out of service for maintenance. In the final years of service, Jetcats were restricted to peak hour operations only.

Sadly, The Jetcat fleet had a shorter life than their predecessors. Jetcats were withdrawn from service on December 31, 2008. It was argued that costs had increased along with declines in revenue. They were lucky not to have been pulled out of service earlier, when the Carr Government (1995-2005) introduced Supercats to the Sydney Ferries Fleet but had struggled to cope with the swells at the Heads of Sydney Harbour. Manly Fast Ferries (2009) currently operate High-speed services between Manly and Circular Quay, but have expanded to provide services from Manly to North Sydney, Darling Harbour, Pyrmont Bay, and the Eastern Suburbs. Sydney Fast Ferries also operated services between 2010 and 2015, when they were the tender to operate the high-speed service.
Posted by Fabian Amuso at 00:00 No comments:

This week I share a Wimpey Homes advertisement from 1966, promoting new house and land packages at Castle Hill and Fairfield West. 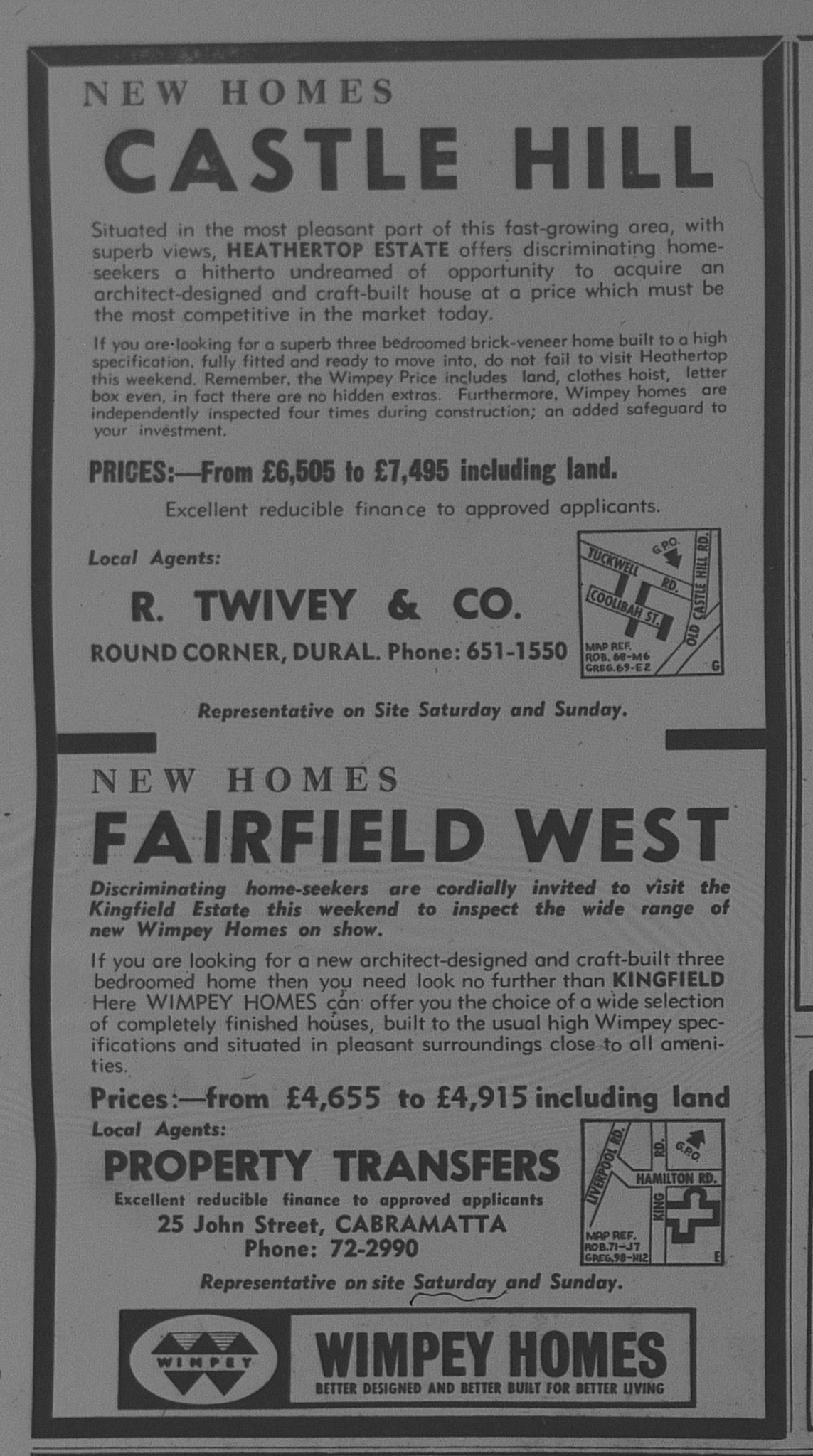 Back in 2015, I shared a 1966 newspaper clipping on the Lady Class Ferries that were due to enter into service by the end of 1967.

On September 19, 1968, the first of six Lady Class Ferries - Lady Cutler, entered service. It was named after the wife of the current NSW Governor, Sir Roden Cutler who was there in person to see her namesake. Another five ferries would enter service over the next decade. Lady Northcott and Lady Herron still operate today. 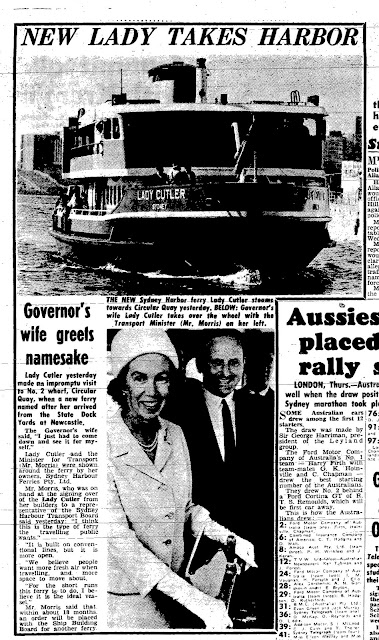 The ferry operated until 1991. In 1998, it sailed down to Melbourne. After refurbishment works, it returned to service in 2007 as the Lady Cutler Melbourne Showboat and does chartered cruises along the Yarra River and Port Phillip Bay.
Posted by Fabian Amuso at 00:00 No comments: