1987: The rumour of the demise of Tom Uglys Bridge

In 1987, The three lane (can be expanded to four lanes)  Georges River Bridge was completed running parallel to Tom Uglys Bridge on the Georges River between Blakehurst and Sylvania, 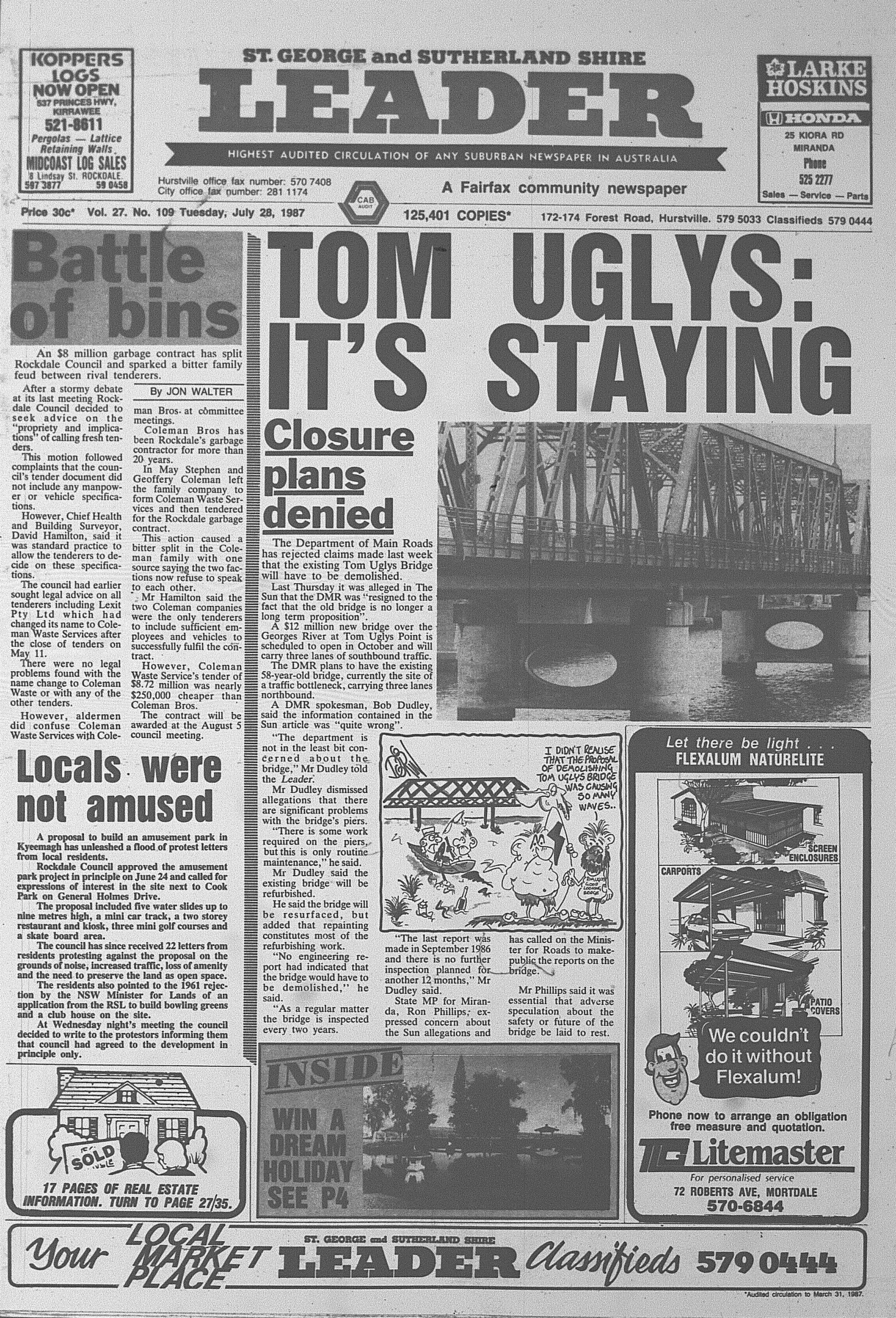 Just months prior to its opening, The Sun reported that the Department of Main Roads (DMR) was considering pulling the bridge down citing structural concerns. The DMR responded by stating that refurbishment works would occur after the opening of Georges River Bridge. The DMR followed through on the refurbishment work.

The idea of the Tom Ugly's Bridge being demolished was never going to be valid as the Georges River Bridge was built to complement the original bridge and remove the bottle necks on the Princes Highway on either side of the river.

Maintenance works on the bridge is a daily part of life. As a local it appears that as one project ends, the other ends.

For the record, there was restoration work in the 2000's to address structural issues. Also it is listed on the NSW Heritage Register.

In 1972, you could inspect model homes by Neeta Homes at display centres in: Winston Hills, Bass Hill, Leumeah, Liverpool and Castle Hill. 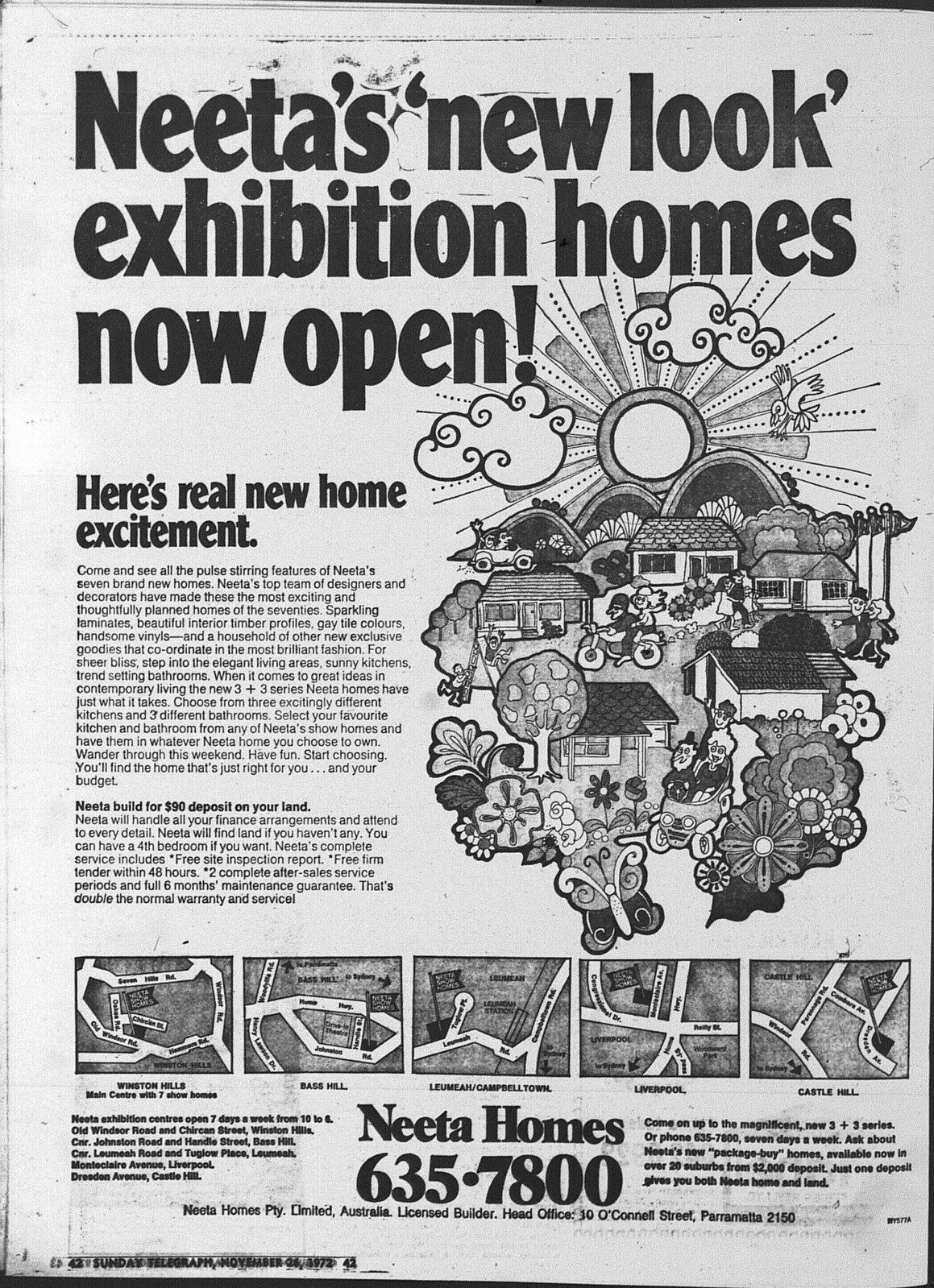 When talking about the Monorail in Sydney, we must have an obligatory reference to The Simpsons .


Last week, I shared content on the opening of the Monorail in 1988, but the question needs to be asked:


What was the impact of the monorail on Sydney?

The impact of the monorail will depend on whether you supported it or opposed it.

This is my summary of the positives and benefits that the monorail bought to Sydney.


Some of the monorail stations are still with us five years after closure with virtually no plans to remove them or adapt them to new uses. The most notable one is at Darling Park, where it appears suspended in mid-air.

While I liked the monorail for giving a futuristic touch to Sydney streets and made the street appear active, it seems that the monorail bought more negatives to Sydney than benefits.

I believe it was in the planning of the monorail that caused its demise. It needed to connect Darling Harbour to the entire city centre, not just "midtown" or even sent it through Pyrmont. A bigger network might mean that we still have the monorail.

Non Sydneysiders and fans may lament its departure, Sydneysiders, in general, have moved on as there are greater transport needs to focus on, than maintaining a monorail that served a limited area of the city.

In the end, it contributed little to transport in Sydney, apart from shuttling tourists from the city to and from Darling Harbour.

What if Nick Greiner's plan to reroute the line through Kent Street had proceeded?

Apart from a cost blowout on top of the existing blowout, it would have hastened its demise. The Kent Street option would have had poorer connections with rail and bus services at Town Hall. The advantage of Pitt Street also improved access for those connecting with buses on Elizabeth and Castlereagh Streets.

In addition, there would be no station near the Pitt Street Mall, which was evolving into a popular city destination.

Why did it get pulled down?


Above: Ten News Report from March 23, 2012, announcing the plans by the NSW Government to close the monorail.

The O'Farrell Government decided in 2012 to remove the monorail within "five years" for the following reasons:


It only cost $20 million for the state to purchase the entire network from operator Metro Transport Sydney (MTS), but also landed the entire light rail network as part of the package.

This is an advertisement by developer Stocks and Holdings that appeared in The Daily Telegraph on March 26, 1966. Blocks of land were on offer at: Bass Hill (Bankstown), North Rocks (Carlingford), Normanhurst and Baulkham Hills. 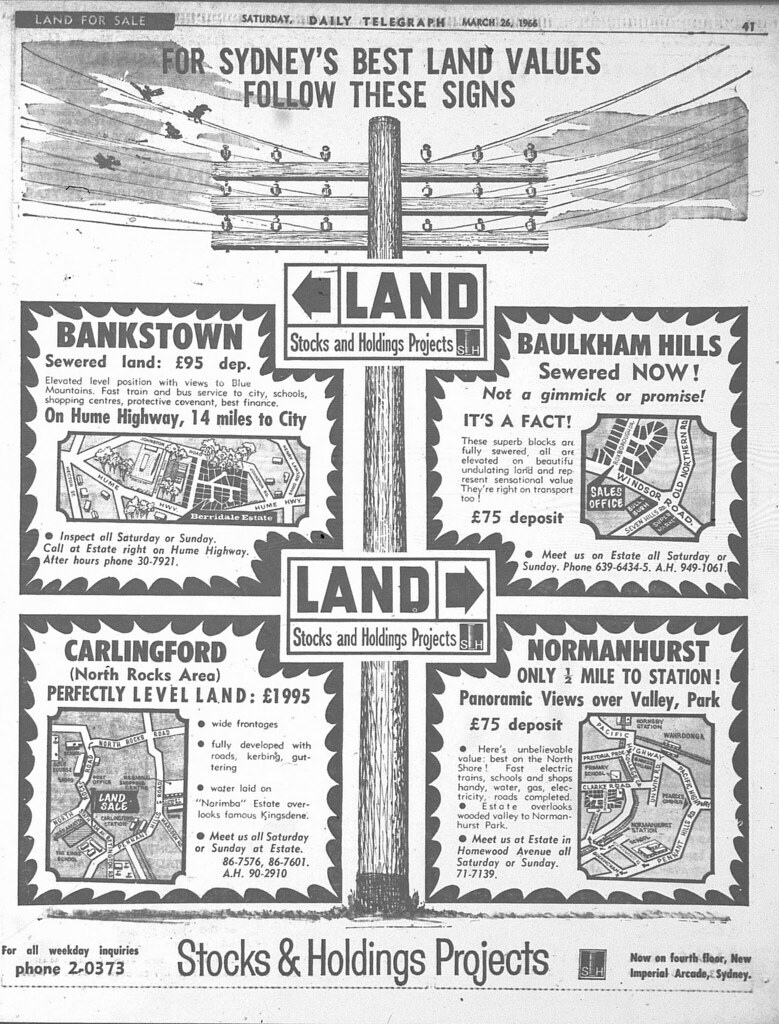 1988: Sydney's Monorail opens to the public

Between 1988 and 2013, visitors to Darling Harbour were able to travel to the precinct from the city by monorail.

Built as a Bicentenary gift by TNT to the people of Sydney at a cost of up to $150 million, it was opened with controversy on July 21, 1988; more than six months behind schedule. Only four stations along the route were ready for opening day.

NSW Premier Nick Greiner was a vocal critic of the monorail. He did not attend, nor did any members of the State Government.

You were either for or against the monorail and even until its closure on June 30, 2013, it divided the city. On opening day, protestors opposing the monorail continued their protests, assembling at the Queen Victoria Building for what was a now a lost cause.

Many more were interested in testing out the Monorail, forming long lines at Monorail Stations for free rides. TNT was ordered by Premier Greiner to do so for two weeks before introducing a $1 fare.

Believe it or not, the network was designed to last just 20 years and outlived it by five years.

Below is coverage by each TV network from opening day 1988 (except SBS).

Channel Ten provided the best report covered by political reporter Bob Mullins. The famous footage of Clover Moore (State MP for Bligh) speaking at the protest outside the QVB is featured - "The monorail is the most offensive structure...". Channel Seven even featured the clip in a 2012 report when the O'Farrell Government decided to buy the monorail and pull it down for upgrades to Darling Harbour.

National Nine News gave us an insight into the views of passengers.


Seven Nightly News gave us a balanced perspective from passengers and protesters.


ABC got an exclusive with Sir Peter Abeles in its report, and follow the debate between a protester and bystander at the QVB.


Newspaper coverage was a bit restrained, despite constant coverage of its hurdles in getting to opening day. 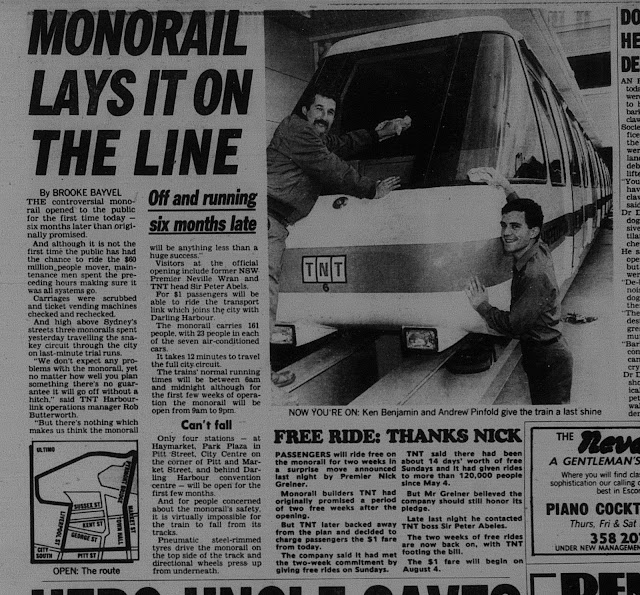 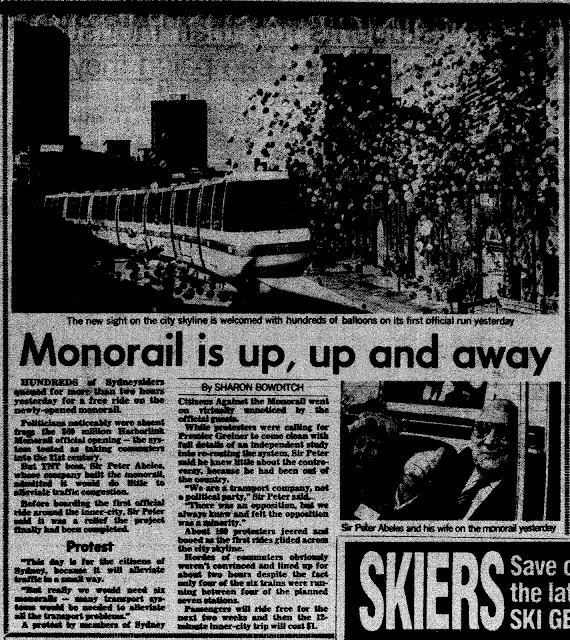 The Sydney Morning Herald listed a one paragraph summary of opening day on Page 6 under "In Brief" in its edition on July 22. 12 000 were reported as riding the monorail on its first day of operation.

Next week, I shall answer the question of the impact of the monorail on the city of Sydney.
Posted by Fabian Amuso at 00:00 No comments:

In 1993, construction began on the Sandringham on the Beach estate at Sandringham. The estate is built on the former site of the Hotel Sans Souci or to the locals - Mick Moylans (He was the owner).

It was a controversial development for locals, most notably for the loss of Moreton Bay figs and Norfolk Pine trees but also the loss of access to the beachfront.

As construction began, the advertisements to promote the new estate began in earnest. 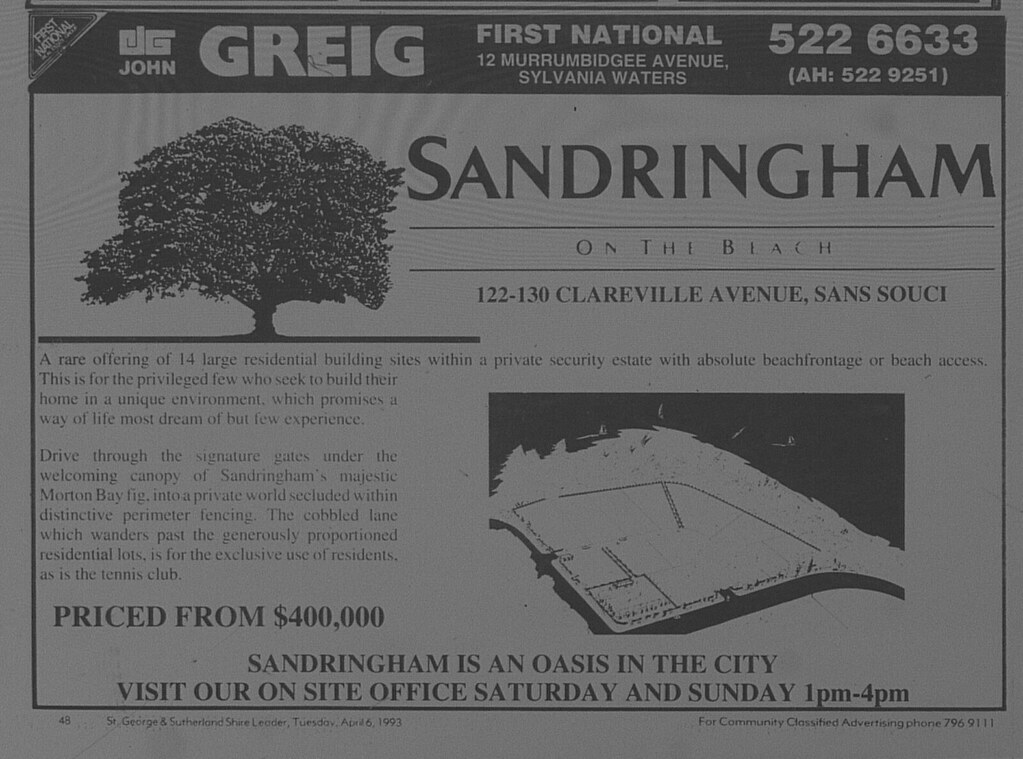 On May 4, it marked 30 years since the Queen officially opened Darling Harbour on the same day in 1988. Darling Harbour was opened to the public in January, but much of the precinct was still a construction site. 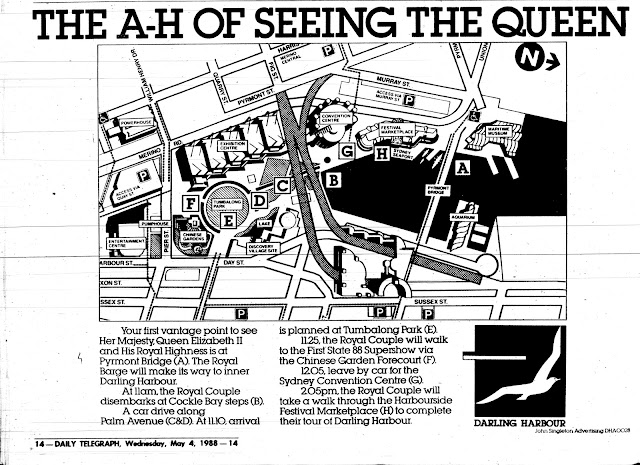 Since January, Harbourside opened in two stages and Exhibition Centre (demolished in 2014 for the new complex) was now ready for public use. 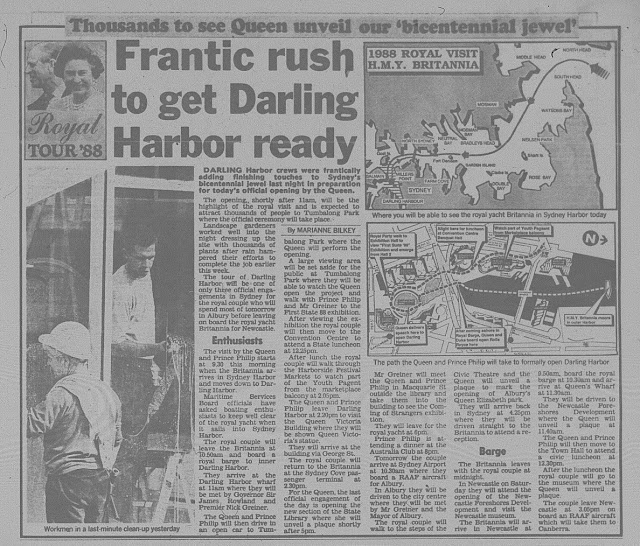 The Queen arrived on the Royal Yacht Britannia before being driven to Tumablong Park where she officially declared that Darling Harbour was open.

She also visited the First State 88 exhibition at the Exhibition Centre and did a public walkabout. 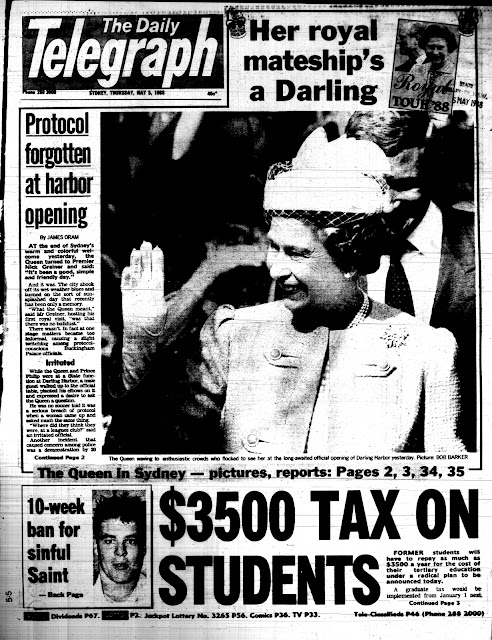 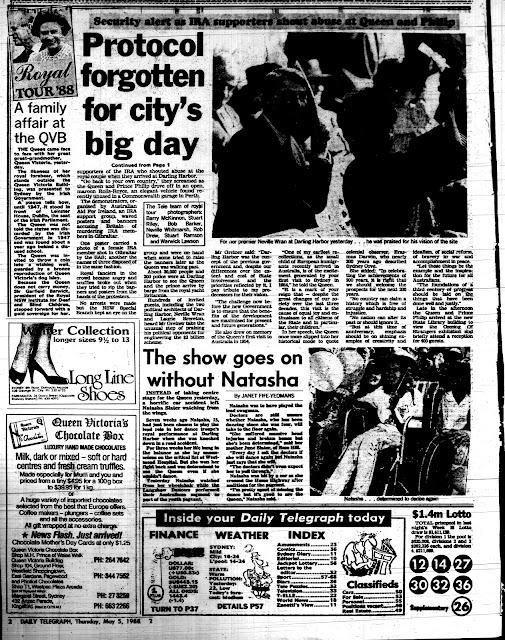 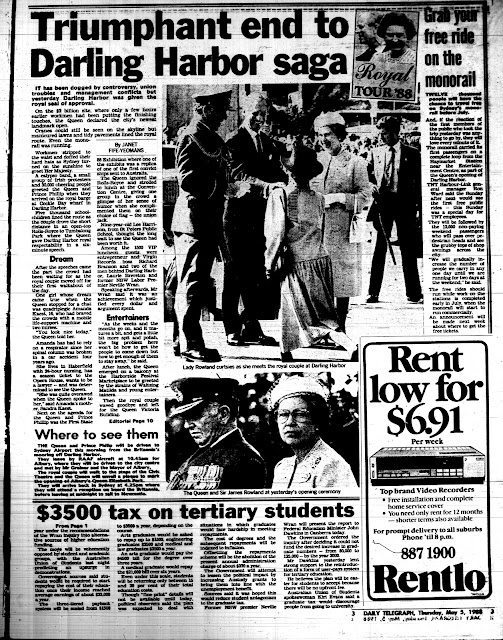 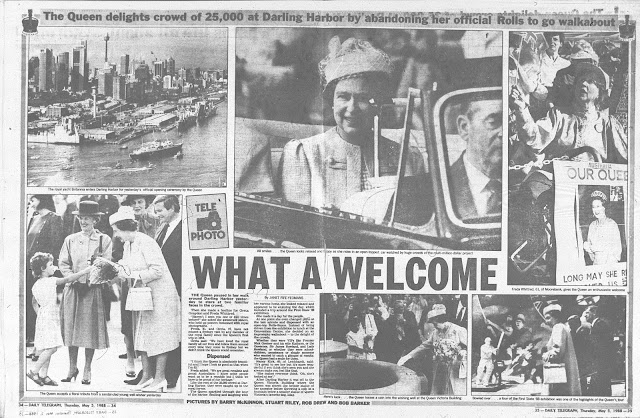 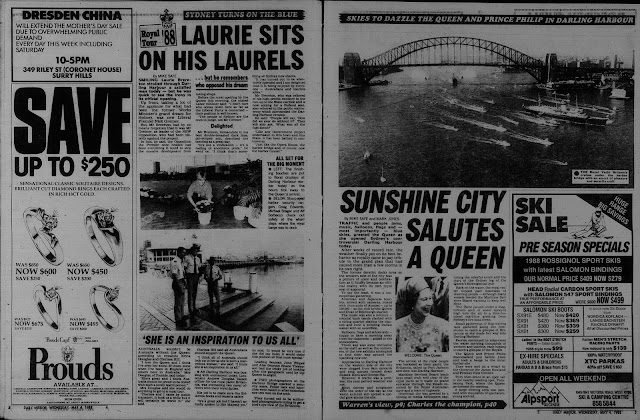 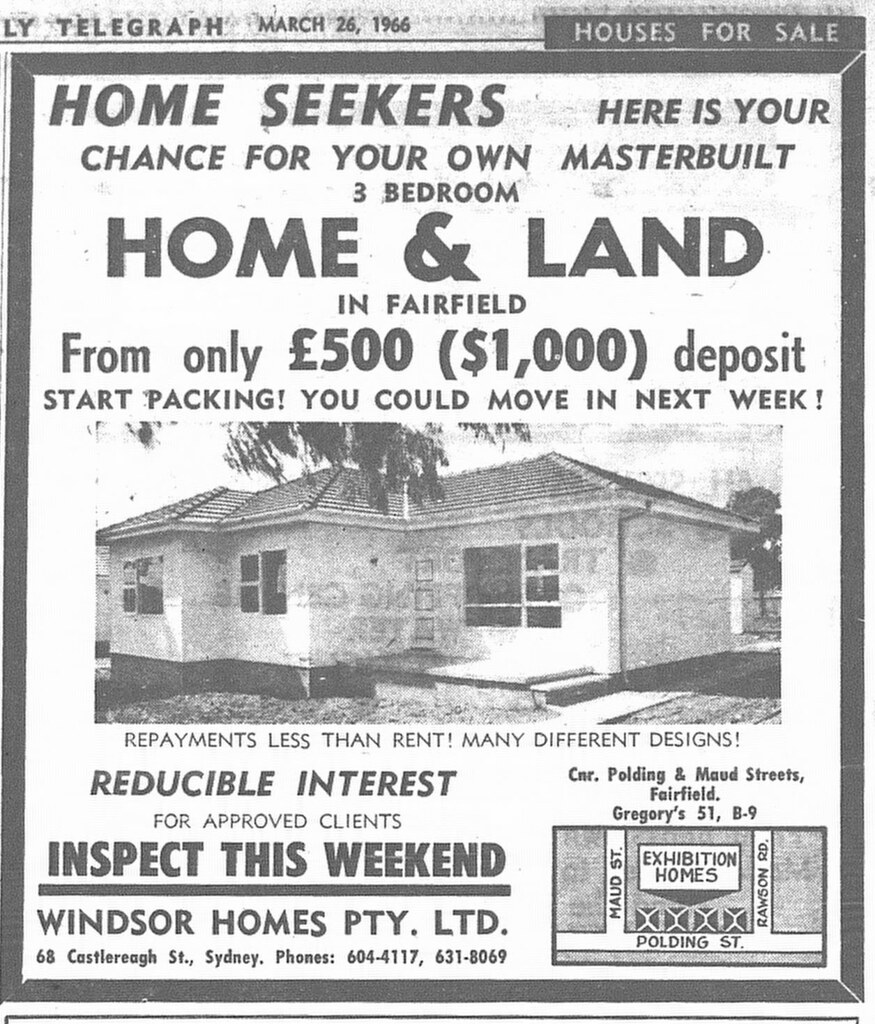